REVIEW: Guardians Of The Past

Lay traps in the arena before killing your friends.

In the party games scene, there are many deathmatch games about, well, killing each other. There are also a few trap creator games about, well, laying traps to kill your opponent in a race to the exit. Guardians Of The Past proposes to mix these two concepts and let players place a few traps before a deathmatch.

Guardians Of The Past has no bots, so you better be 2 to 4 people, whether local or online (interestingly, also LAN). There are two game modes, one in which the players lay their traps before the round starts, the other in which the AI gradually adds more traps to the battlefield during the round. Unlike many similar games, Guardians Of The Past is not instant kill: each player has a health bar (misrepresented with three hearts), and they can respawn after dying. The winner is the one with most the points at the end of the round, earned by killing the others. 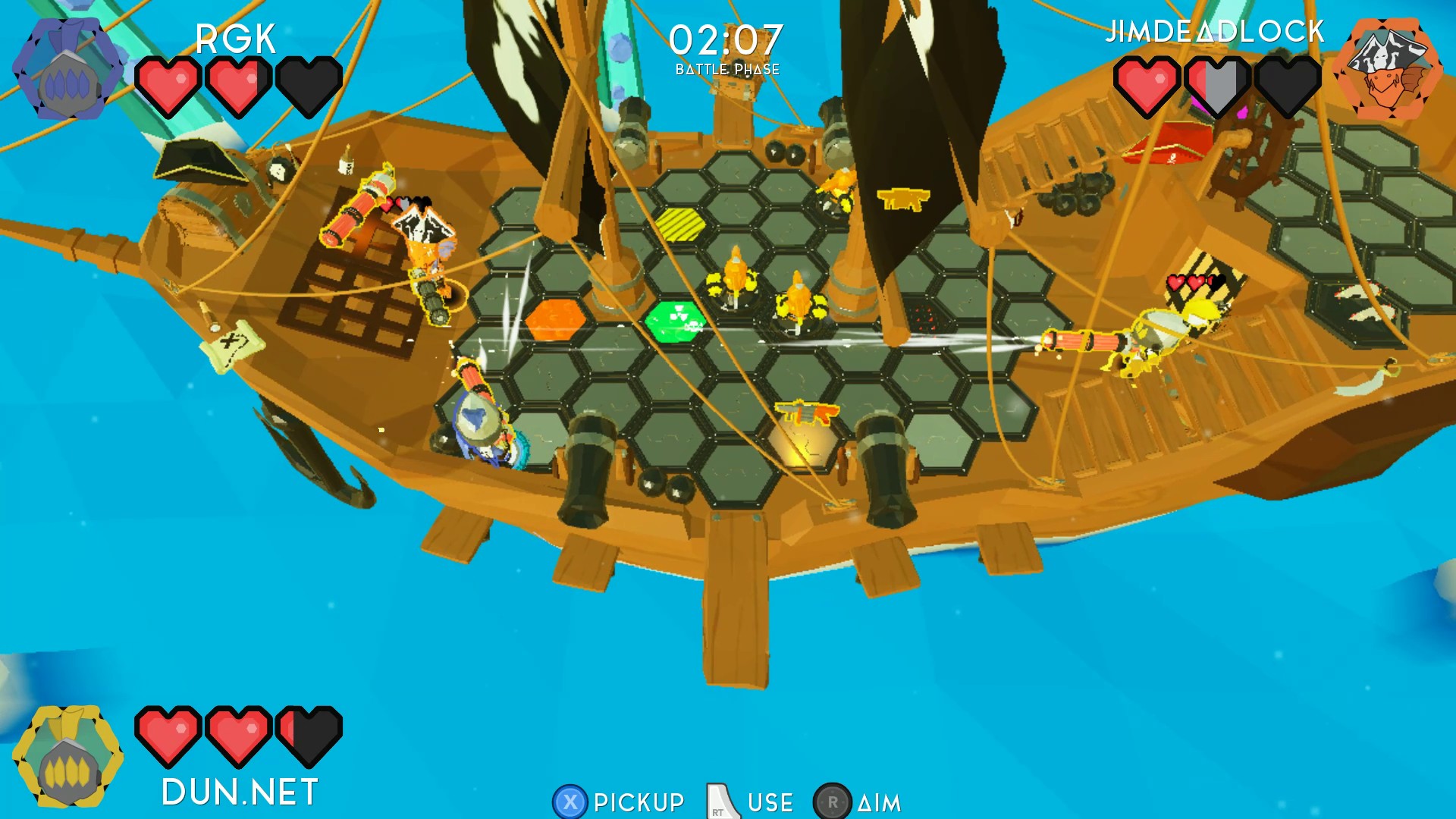 There are nearly all the types of traps that you can think of, dealing damage or slowing down players. My personal favorite was a small insidious tile that inverted the controls of its victim! My fellow player S-1 was very adept at placing jump pads that aimed at the water. Jimdeadlock doesn’t discriminate, he liked them all. I won’t describe them all, but there are also bear traps and incinerators! It’s possible to place them in a manner that makes use of the level, since there are six different levels with each their own quirk. There is one with a pit right in the middle or one featuring two islands connected with a bridge while a pirate ship regularly shoots its canons. Overall, it all combines into a fun experience! 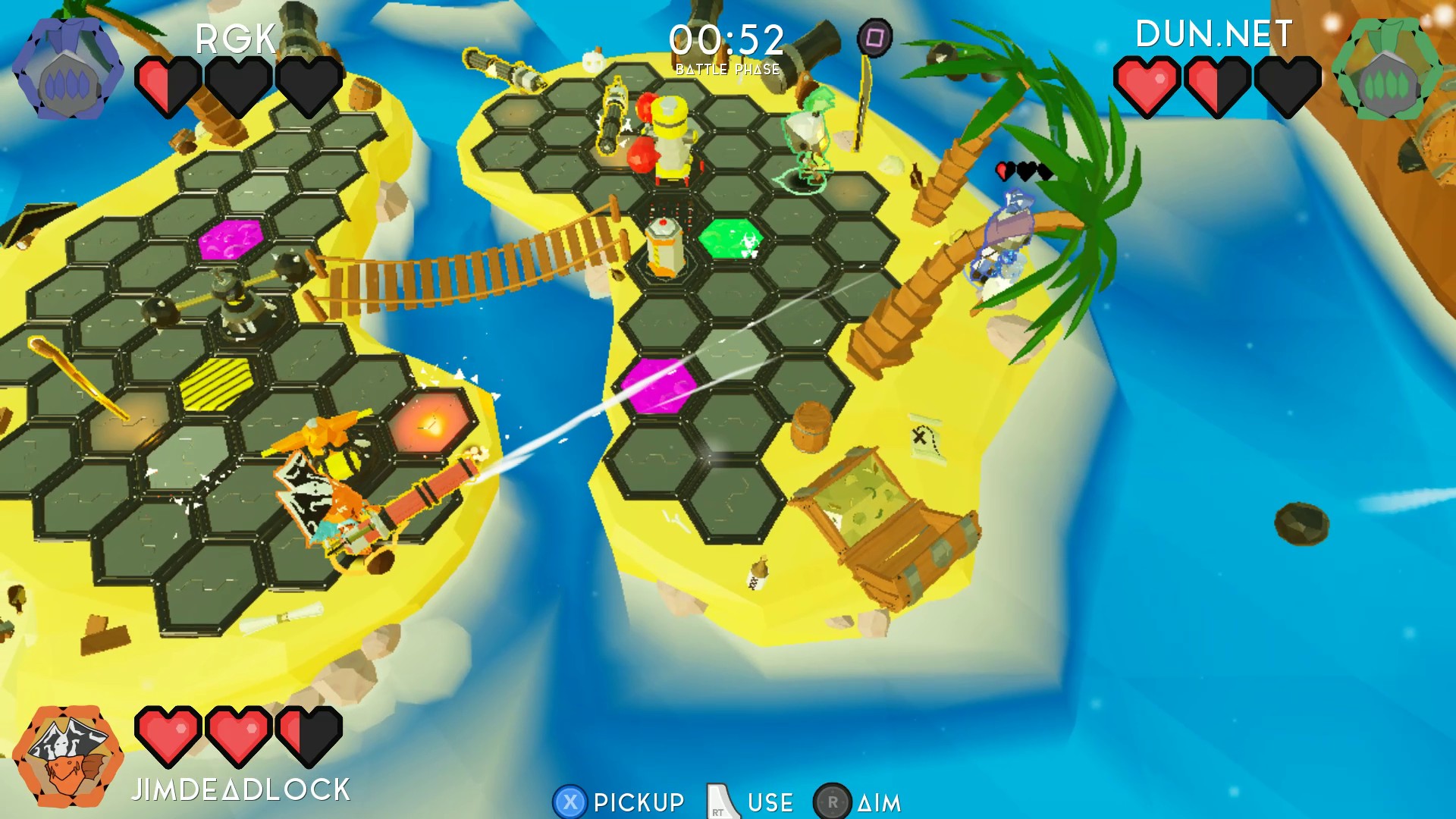 Players always spawn in the same spot, which is not ideal as it should have been randomized. Once they spawn, the competitors are empty-handed. Their only hope to survive is to grab some of the weapons randomly appearing in the level. Some are melee weapons, such as a hammer with a lot of knockback, others are ranged weapons such as miniguns or shotguns. There are a few exotic tools, like a grappling hook to pull an unsuspecting victim into the pit, or a staff that inverts controls. Overall it works, but the game feels clunky. It does not run smoothly, and attacks remove variable amounts of health rather than straight up removing hearts. Also, many weapons have a delay in between each use, and it’s not communicated clearly. Overall, it’s lacking feedback. 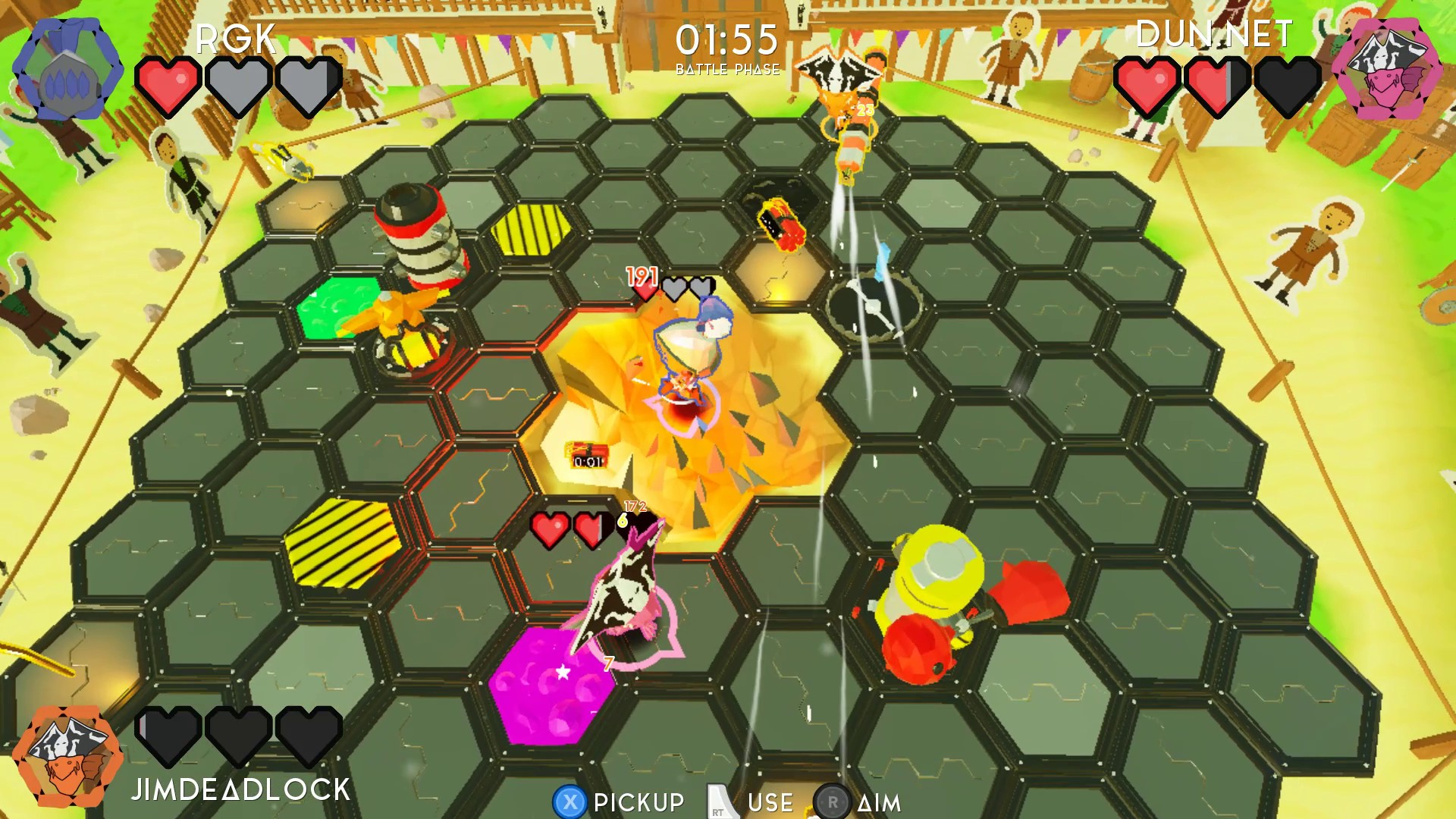 While the game plays OK for the most part, it’s not technically sound. As mentioned, it feels slow and sometimes laggy – probably poorly optimized, it was slightly better when I decreased all settings to Low. Sometimes, the sound entirely disappeared until I restarted the game. Dualshock inputs were displayed on my screen rather than the Xbox controls (which were correctly set in the menu). We didn’t manage to play locally with one on the keyboard and the other on a controller, we had to plug in a second controller. 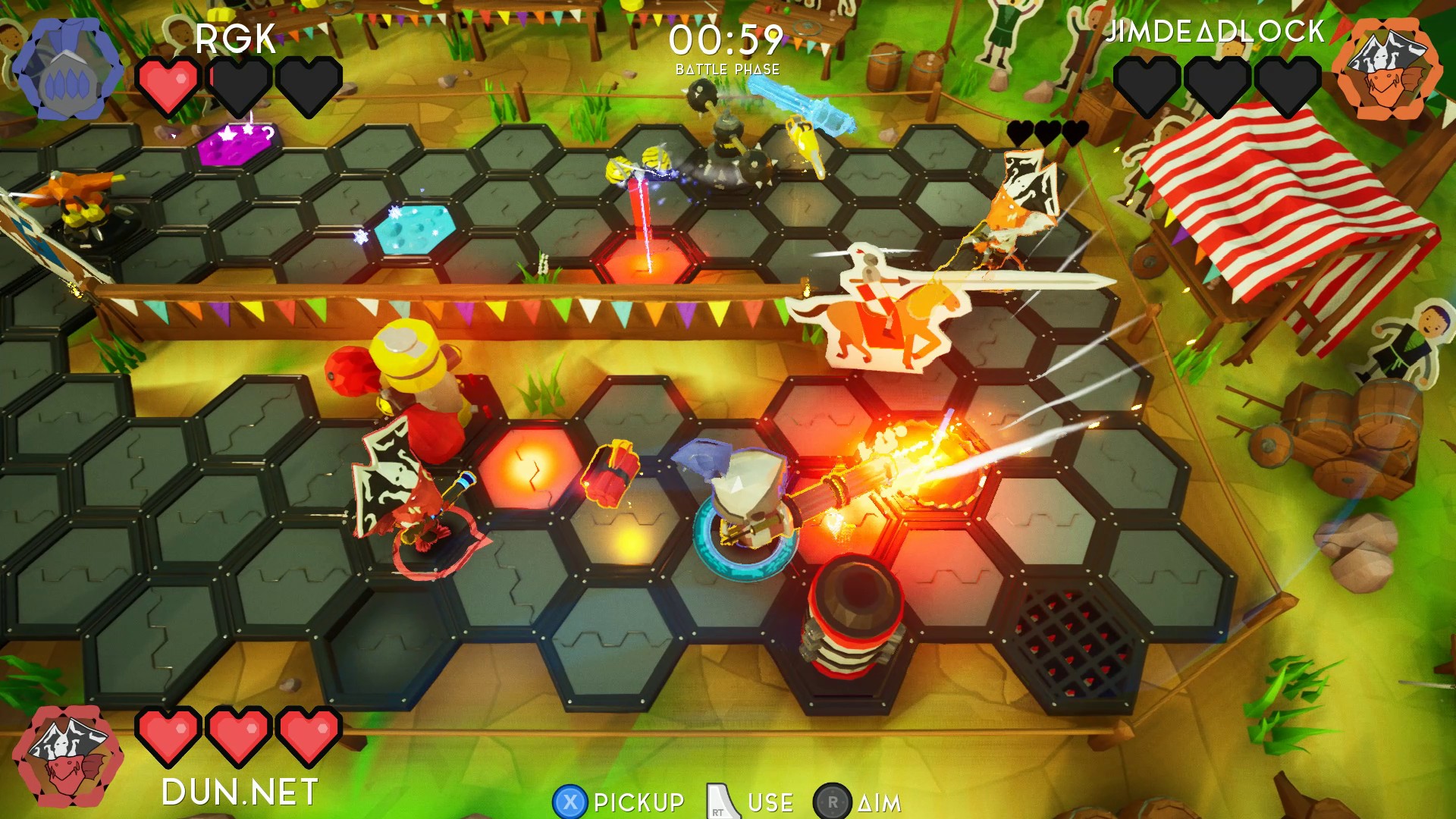 Basic controls are well made, at least to my state; it’s a shame that it’s not possible to rebind buttons in the menu. X is to pick up or drop a weapon, RT is to shoot. While the game handles fine with a controller, I did find the mouse & keyboard combo to be much more effective as it allowed to aim with the mouse, and even displayed the area of effectiveness of each weapon. 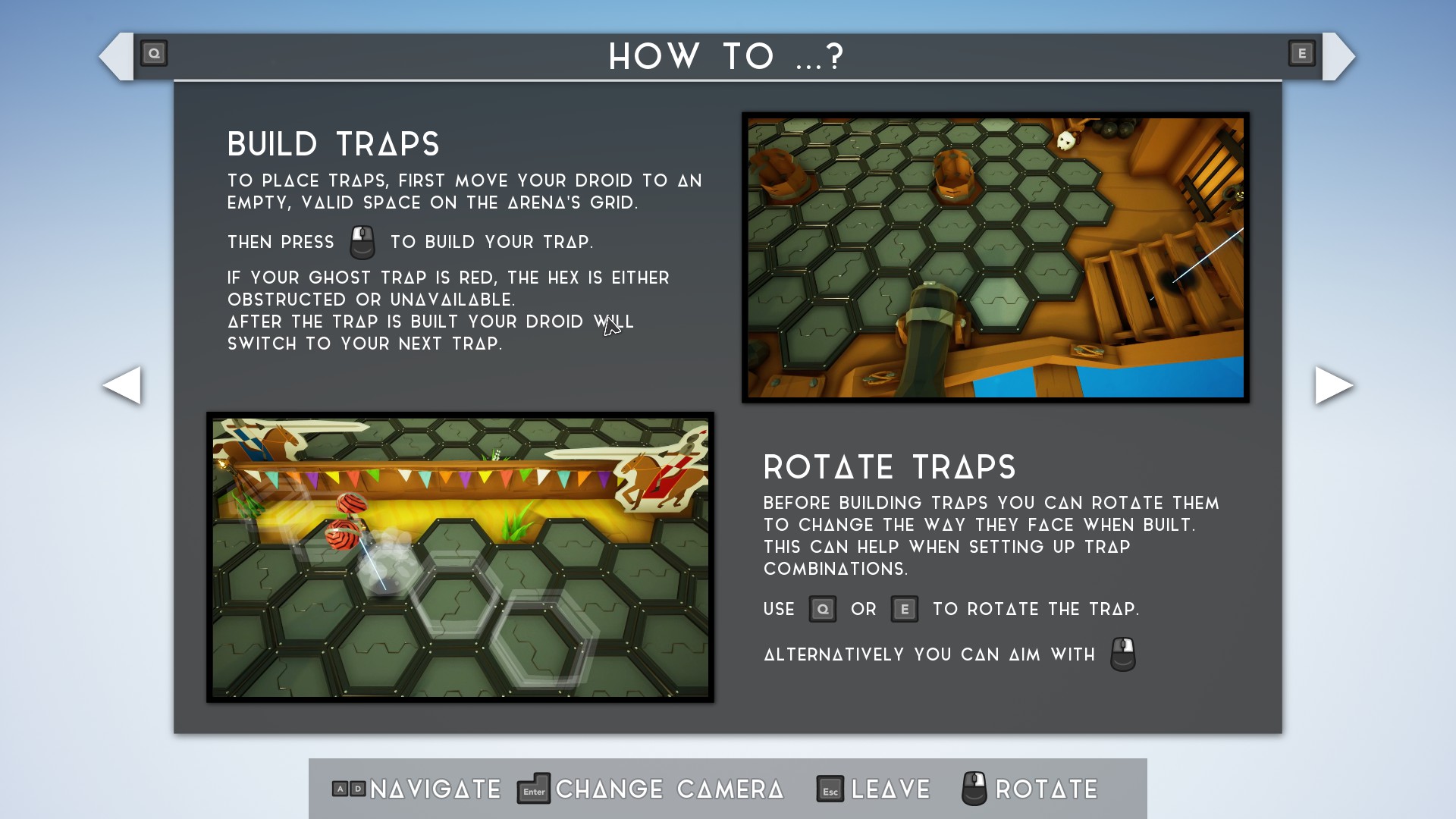 Guardians Of The Past has a great concept, but we did find it lacking in its execution. It’s very rough around the edges. Thankfully, while there are issues and it can feel a bit clunky, it didn’t take too much from the enjoyment as we spent an enjoyable evening with the game. It’s not a must-have nor a game that I would strongly recommend, but you wouldn’t go horribly wrong by grabbing it for cheap. Ultimately, the traps and some of the maps provided are fun and caused quite a few explosive laughs.