‘Blacksad: Under the Skin’ is a detective story set in an alternate version of 1950s New York and populated by anthropomorphic animals instead of people. It is based on the setting and characters from comic books of the same name, but with a new plot. 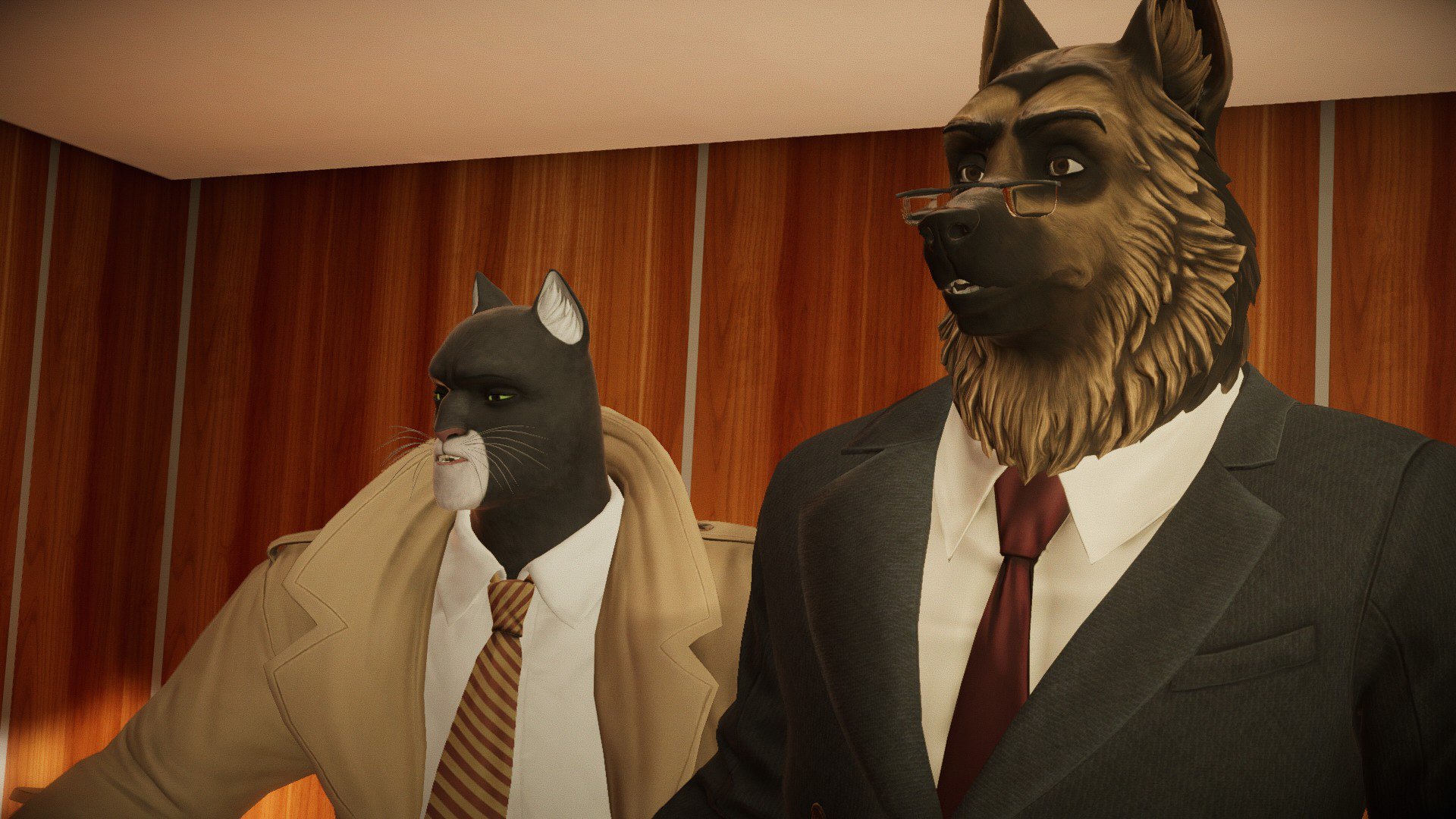 The owner of a popular gym in the city, Joe Dunn, has be found hung and his most promising boxer student who is meant to participate in an upcoming match is gone without a trace. Quickly an investigation was launched to find out what happened and whether this was a murder or not, as well as to determine the missing boxer’s fate. Of course with such stories, it’s never so simple, and the plot starts to gradually unravel one bit at a time. We get to investigate the local mobsters and other crime bosses in the city to find out if any of them played a part in this.

Our character, John Blacksad, is a private investigator for whom the finances are very tight and every job is important. He is a reserved guy, and his trust in the police and authorities isn’t high. However, he has a few friends who he can rely on, such as Smirnov, a rather stoic and by-the-book police chief, and Weekly, an aspiring media photographer who is hungry for the next big story.

The New York in the 50s setting populated by anthropomorphic animals is pretty interesting and gives the game its own style and personality. It’s certainly not the first game to have such style and not the last, but the way it adds such a big variety of animals into the mix and makes them all aware of their own differences is quite good.

The overall story-telling and character building is pretty good. There are many twists and unexpected moments to keep the plot engaging. And there are some different outcomes present too depending on the choices we make.

The gameplay had a number of different aspects to it. There were some great aspects and a few that were nothing special or a bit on the annoying side.

The main thing are the point and click interactions and some puzzle solving akin to other point and click games. We can interact with some parts of the environment, and depending our progress in the investigation, some new interactions get unlocked over time. It’s pretty standard and what you’d expect.

What I liked quite a great deal is that after most interactions, we collect clues. When we have certain clues that are related to each other, we can then go into the deductions menu and combine those clues together to make a deduction that helps us move forward with our case. That way we take an active part in being a detective and working out what happened. 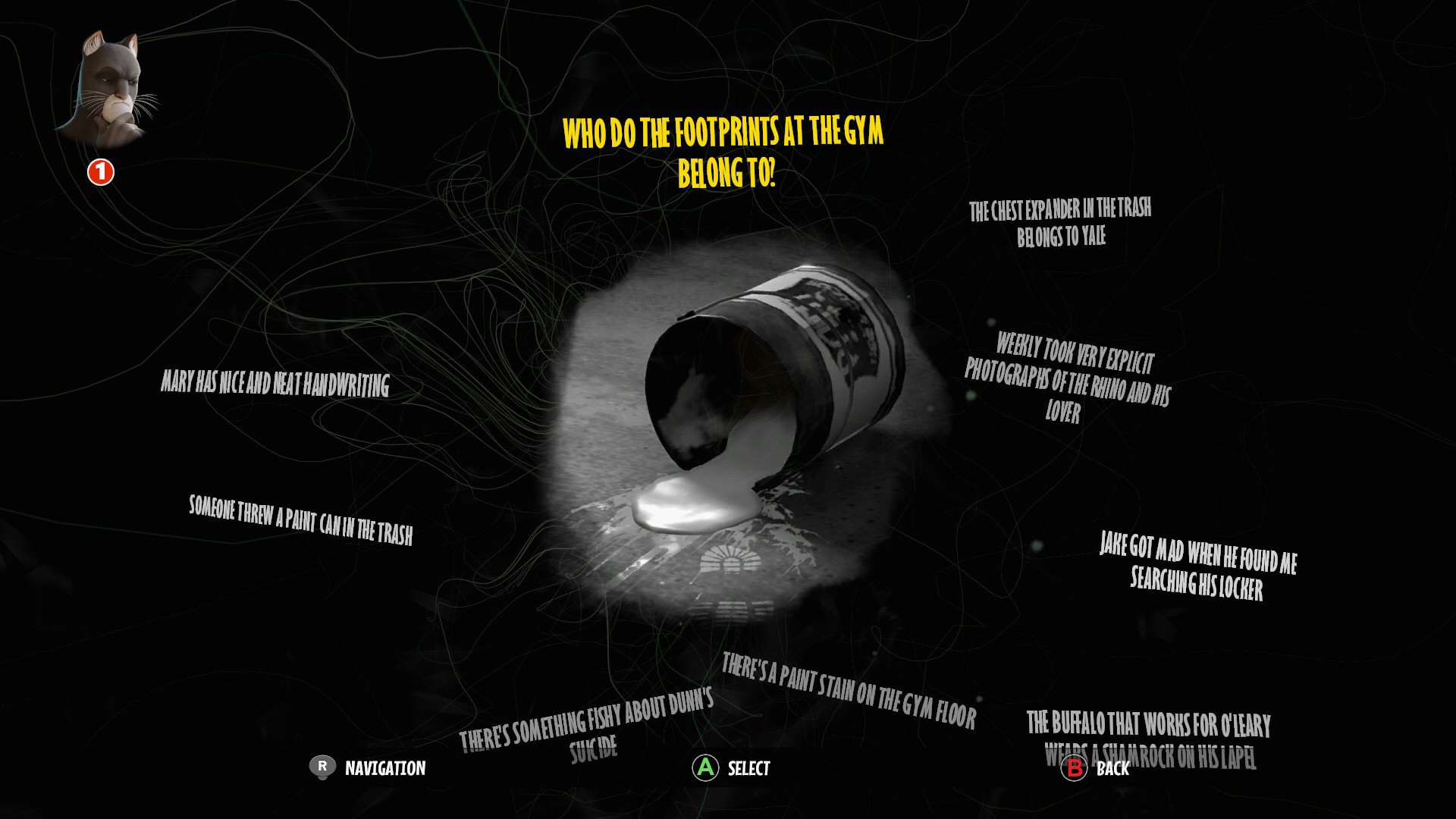 There are also a lot of dialogues with many different characters, and in each dialogue we have many choices on how to respond. Most of those choices don’t change much or are just exhaustible options we go through one by one, but some choices do have a big impact on the events and can affect the ending. I could be mistaken, but I think the overall plot and all the main events will still happen regardless of what we choose, but some aspects, such as the fates of characters, will be affected. Although I recall one of the big choices I made in the game didn’t seem to have its outcome shown at all, something that we should’ve found out at the end. I even waited till the end of the credits for a possible post-credits scene, but nothing. 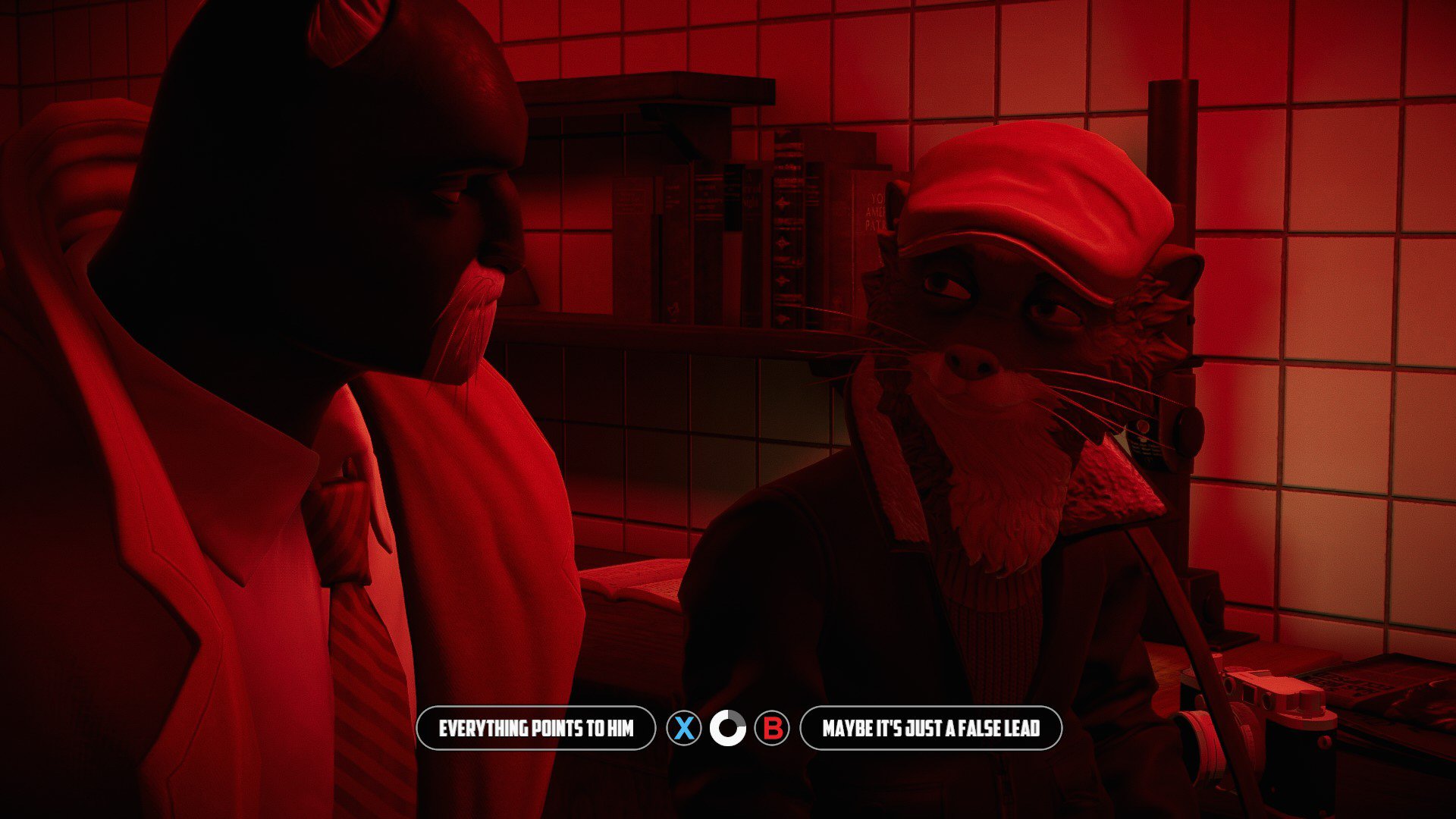 I wasn’t too fond of how most dialogue choices were timed. In some situations having options timed can help to enhance the sense of urgency, but these situations really are quite few, and most times this time limit felt annoying, especially if the lines in some dialogue options are long and the time is short, so you skim read them all and just about manage to choose one before the timer runs out. At the very least, I think the time limit on many of them needs to be longer. Way longer.

This also brings me to the quick-time events. There are many of these occurring throughout the whole game. Most of them are pretty easy and get you to engage in the scene rather than just watching it. Although I really disliked the button-mashing ones, where you had to keep mashing the same button really fast to fill in the bar before we fail. I don’t understand why these button-masher mechanics still appear in games because they don’t add anything to the game and only leave you with a sore thumb and possibly a broken controller. Apart from those, the ones requiring quick prompts were reasonable. Failing many of the quick-time events often resulted in character death and a chance to retry the scene again. 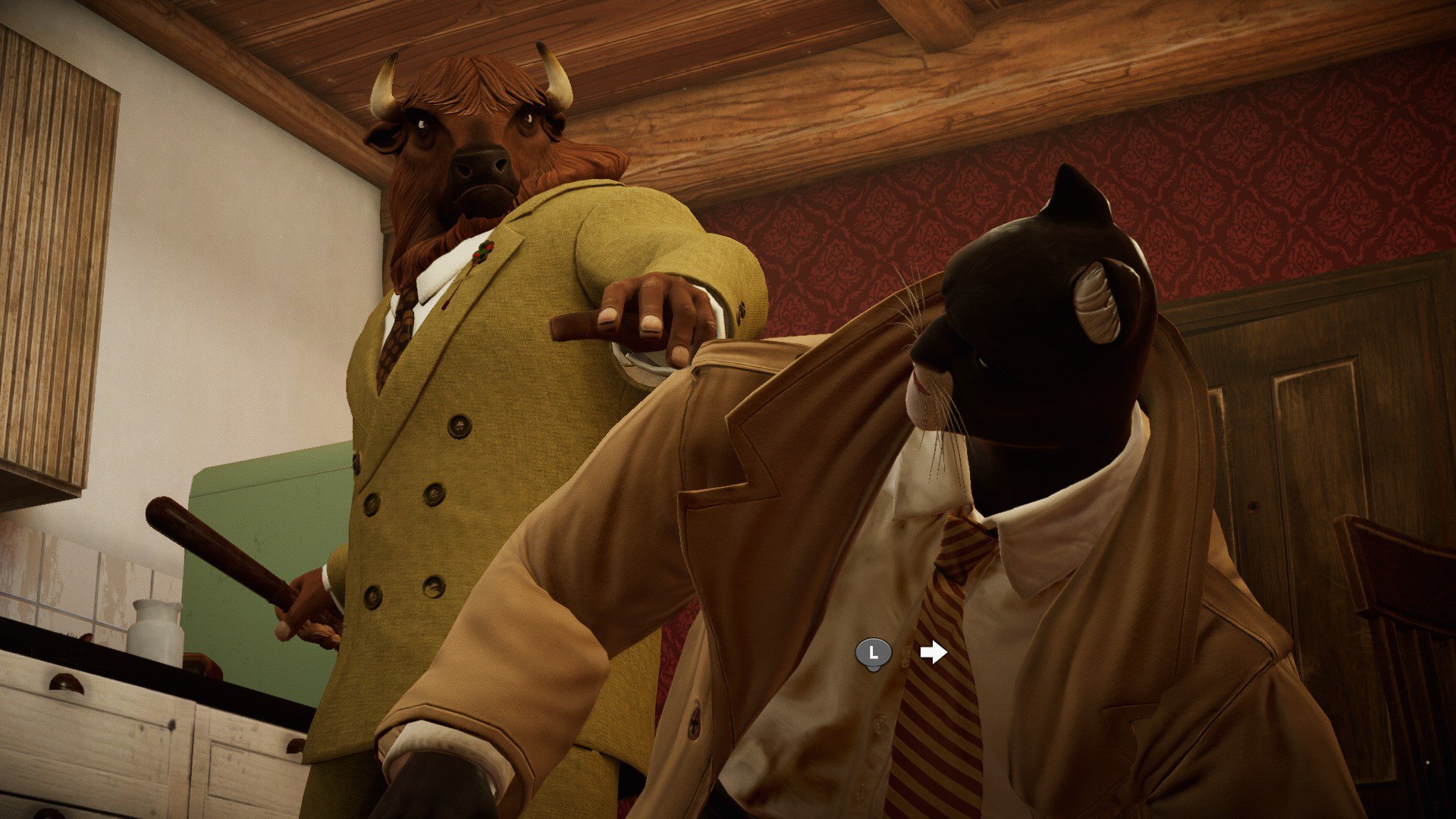 Lastly to mention, there was an interesting addition of feline senses when interacting with the environment or during the dialogues. From time to time we get a chance to analyse our environment with all of our senses. As we move around the area of view and zoom in, eventually we can home in on points of interest. During dialogues this is especially pretty nice as we hear Blacksad’s internal thoughts about what he sees, hears, or smells about the person he is talking to, which opens up new dialogue options.

The game has really nice and stylistic visuals, resembling a comic book brought to life. Each character has been made with care and attention, and the locations are all varied and nicely designed too. The representation of 50s New York was captured pretty well.

The music during the scenes is also quite notable and good in most places. A lot of it fits with the jazzy musical style of the 50s, so it’s quite appropriate for the time period it’s trying to convey in the game. Every character is also fully voice-acted, and from what I noticed, all of the English voice acting has been quite good (though voice acting also exists for other languages). Although the voice of our main character seemed a little higher and softer than what you’d expect.

The character controls were somewhat stiff and clunky and could’ve certainly been made better. It was not uncommon for me to struggle to turn the character around or walk past an obstacle or to find an exact spot to stand in order to be able to interact with something in the environment.

There was also no way to skip or fast-forward through the cutscenes if you’ve watched them already. And in terms of saving, the game relies on autosave. So if you died due to a bad decision or needed to quit the game partway through a scene or decided that you wanted to make a different dialogue choice, you’d likely need to fully rewatch a cutscene or two all over again. 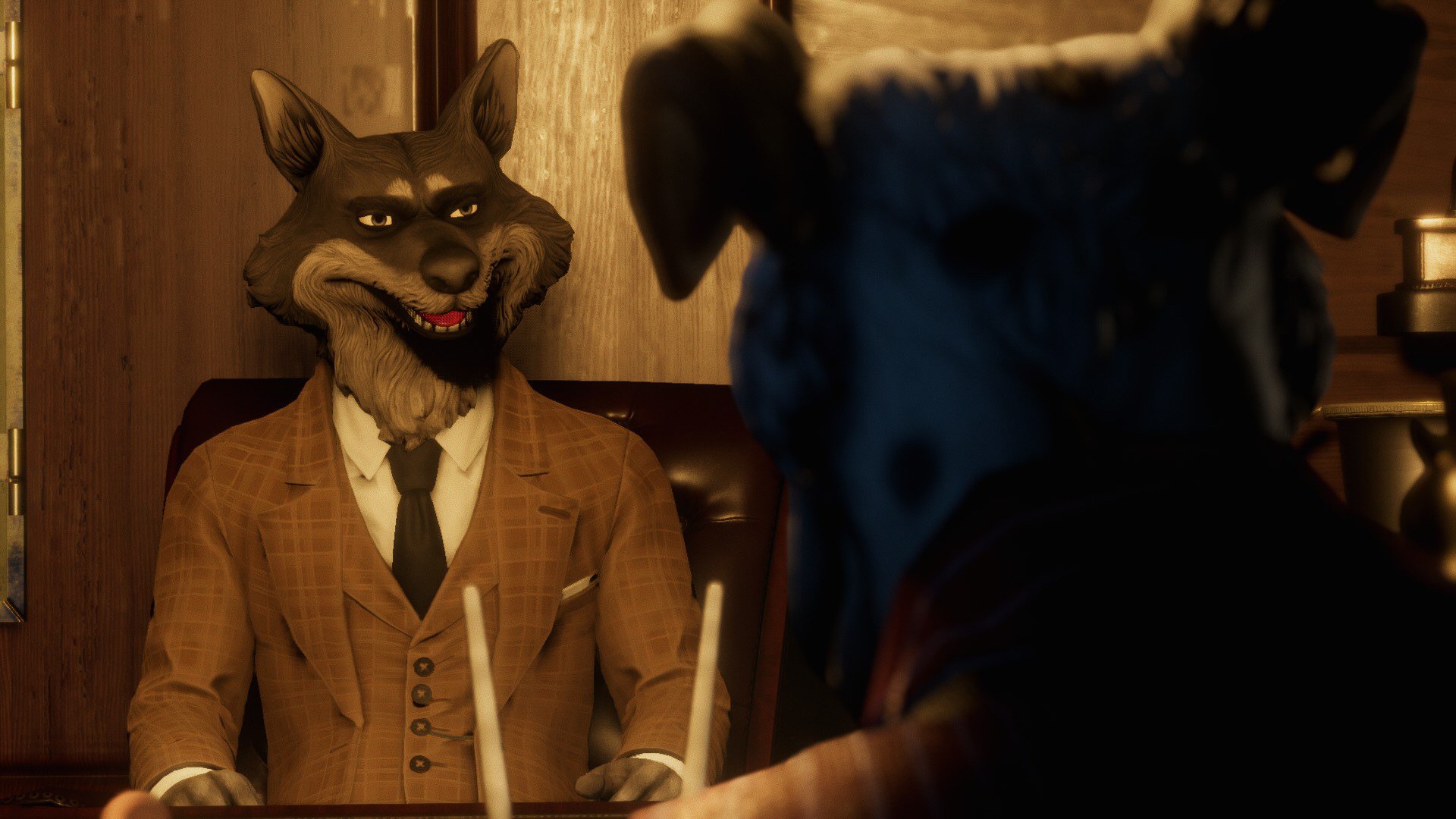 ‘Blacksad: Under the Skin’ is a solid comic book style detective game with an interesting take on 50s New York. The characters and plot are quite interesting and nicely put together. The gameplay is more on the casual side and has interesting mechanics regarding deduction-making and using feline senses to scan the environment. There are choices with some effect on outcomes present too, although most of the story is quite linear. And there are quick-time events during action scenes, most of which are easy, but a few can be a tad annoying. The visuals, music and voice acting are all very strong when it comes to presentation, but the controls could’ve been made better and some quality of life improvements could’ve certainly been added too regarding cutscenes and saving.

In general, it’s a good quality game, so I can definitely recommend it to fans of the genre. Although I think the full price is a bit too high and I’d recommend to get it when it’s on a discount.