Set up traps to kill your friends!

Obstacle courses can be crazy fun. Here at Save or Quit, we had a good time with the gauntlet in Party Panic. Now combine this with players setting the traps themselves, as in the 4-player platformer Ultimate Chicken Horse but with the top-down view, and you have a recipe for laughter and hatred.

Rounds in Trapper’s Delight take place over two phases. During the first phase, players are each given a few traps and then place them on the playground. The triggers can cycle through traps while the bumpers change the orientation, or a right click from the mouse. The second phase is about reaching the flag at the end to score a point! Some players scramble to the finish line while doing their best to avoid traps, while others take a step back and let others die first so that they can learn where the danger is. 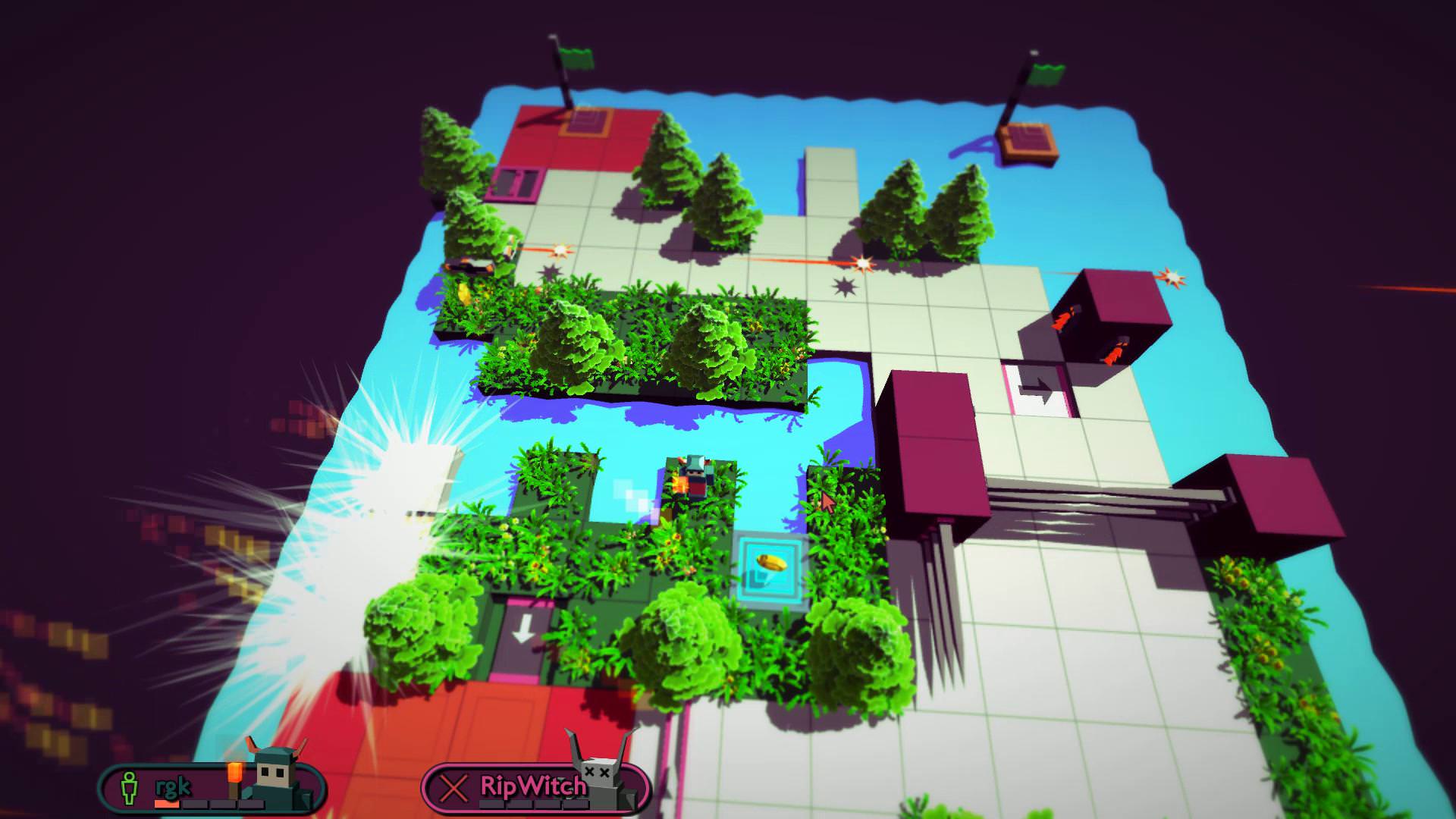 There are hidden lava pits, hidden bridges for shortcuts, arrows in the walls, buzz-saws, jumping pads, freeze and shield tiles, and so on. The first rounds are usually just a breeze, but then it becomes dangerous to even step outside the spawn area. Passages are condemned or cleared with a bomb. There are many levels to serve as a blueprint for the traps, providing more or less alternate routes and ways to express your inner sadist. But remember, you also want to reach the exit, so you might want to think about keeping a path open. 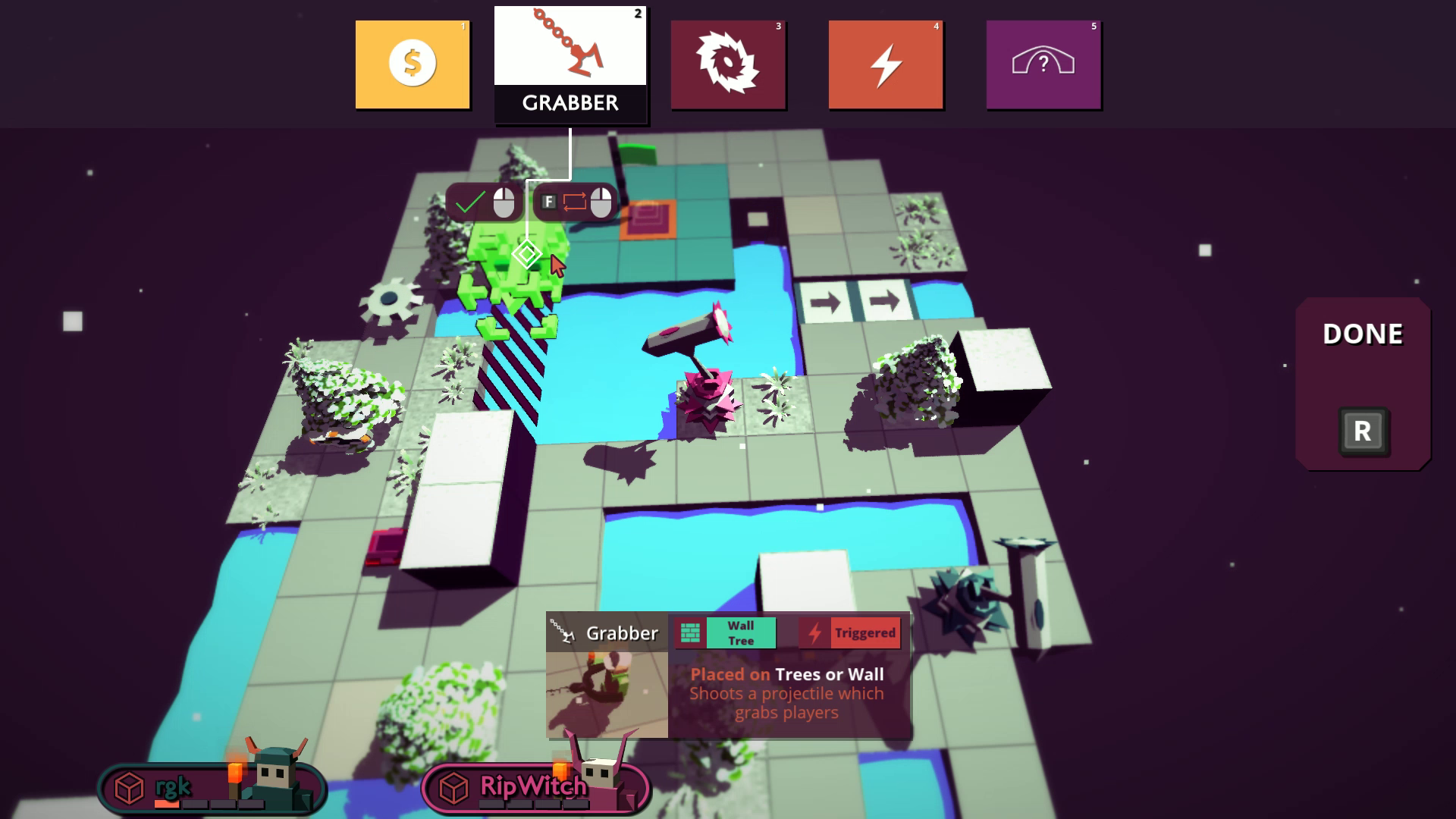 The world in Trapper’s Delight is made in low polygons, flat shapes, and basic 3D cubes. It’s cute, but despite customization it’s hard to distinguish characters apart. With my fellow players, we often ran straight into lava while thinking that we were controlling another character. Confusion also applies to the traps, as the game does not convey any visual cue as to when they reset or not. Is the hidden lava trap from the last round still there, or did it disappear completely? Can we brute force our way past a flip tile? Does the punching trap only attack once and then it’s safe? Is a trap hidden behind a wall invisible to the base perspective? There is a great single-player mode to learn the tricks, it’s like puzzle levels to figure out. However, things should be clear when players pick up the game directly in multi-player. 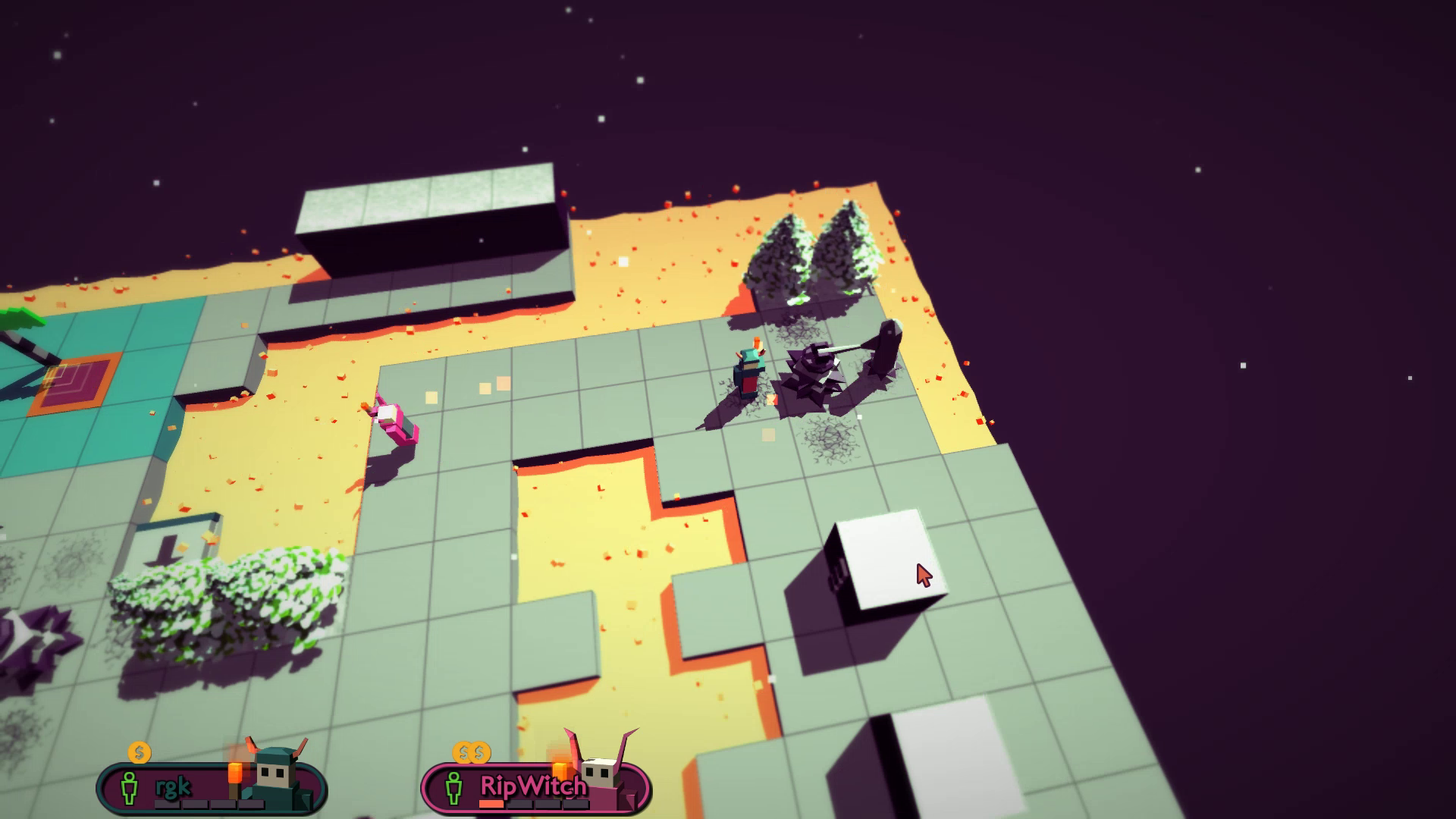 Talking about multi-player… Well, you would think that this is a local multi-player game, ideal with four players and four controllers, right? That’s not the experience we had. First, we tried that and it was a complete mess, both in terms of visibility and traps. Too many things on the screen while setting up the traps, too many hazards when moving in the levels, my friends instantly wanted me to move on to another game. Then we played this online, one versus one. My efficiency increased dramatically as I graduated to mouse & keyboard, placing the traps was more intuitive and less time-consuming as well as smoother movement with WASD, allowing characters to move up down left and right rather than 360°. Sequential inputs on the directions allow being more precise than with a stick. That’s the way to be played! Likewise, playing one versus one was much more interesting. There is more room for mind-plays with one opponent, analyzing their path, predicting where to lay traps and where they place theirs. How they conveniently started avoiding a seemingly clear route. Definitely a hidden trap there. 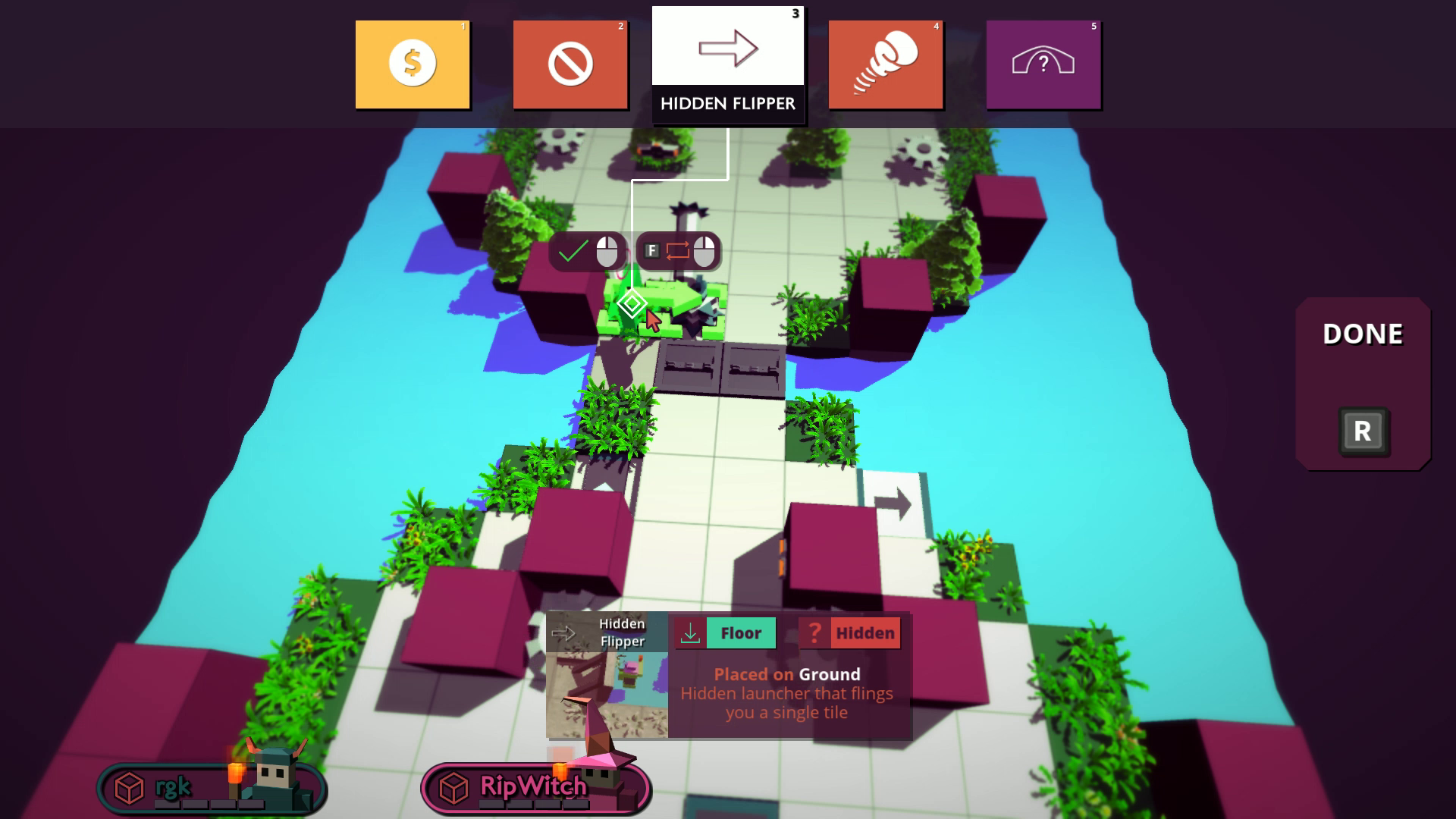 Still, even when playing one versus one the map is soon cluttered with obstacles that make it impossible to get through. Round after round, and it gets tiring. The game defaults to 15 rounds, which is way too much on a single level. When we switched to 5 rounds, we were kept on our toes before a layout overstayed its welcome. There remained one small problem. The “one-point advantage”. Whoever was first to get ahead in points (by reaching the end flag while the others don’t) could completely block off the routes to the exit, in all simplicity. Just put a grinder on the only accessible tile, or a hidden flipper, and game over for everyone else if they can’t catch up. There are ways to clear the path, such as with a bomb, but it relies on chance and knowledge of all the traps in place. Also, by itself a bomb can also leave behind a lava pit. Being ahead in terms of points is too much of an unfair advantage.

There is no jump button, so once a path is blocked, it’s blocked. However, there are still some sneaky ways to get past a barrage of death. Hidden bridges, grabbing claws, jump pads all used correctly can amaze everyone as they watch you from the afterlife. That is if you don’t stupidly run into lava by taking a turn too soon. The movements tile by tile are definitely an acquired taste. 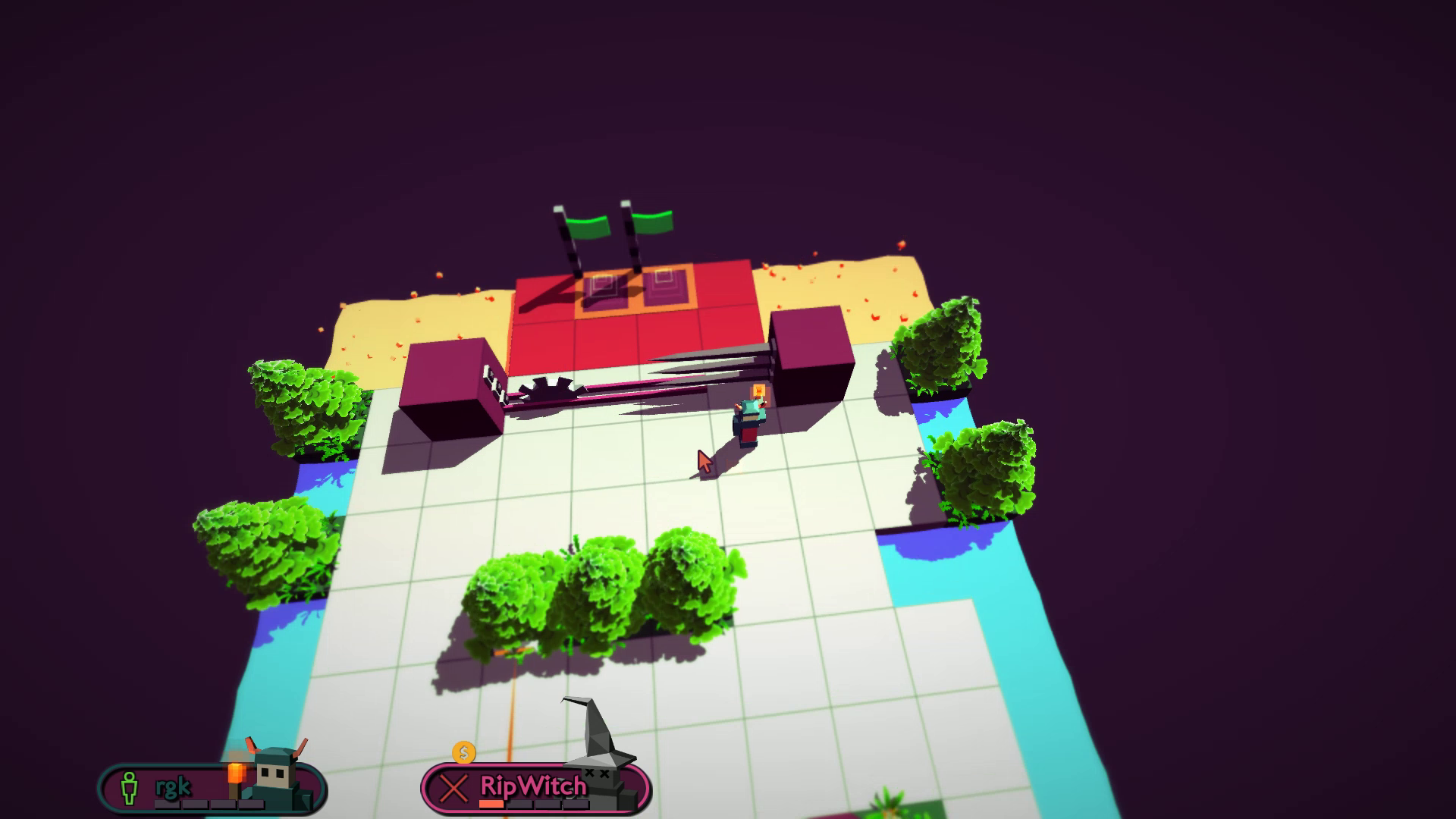 The menu is very thorough, key bindings, single-player, multi-player online or not: nothing to complain about. There is a level editor, and maps can be sent to the Steam workshop to share, which is fantastic. When creating a lobby, the traps and the rules can be customized to adapt the game to the tastes of the players. As usual, there are no people online. I wish people would stop down-voting the games for that. It’s normal for indie games not to have public games available at any given time, what you are supposed to do is play it with your friends or find players in forums or on Discord. Think about the developers: if it’s only local, the game is down-voted for having no online mode. If it has an online mode, the game is down-voted for having no people online. “Damned if I do, damned if I don’t”. Developing an online mode is already very nice, so please don’t feel entitled to find people online for these party games, bring your own friends! 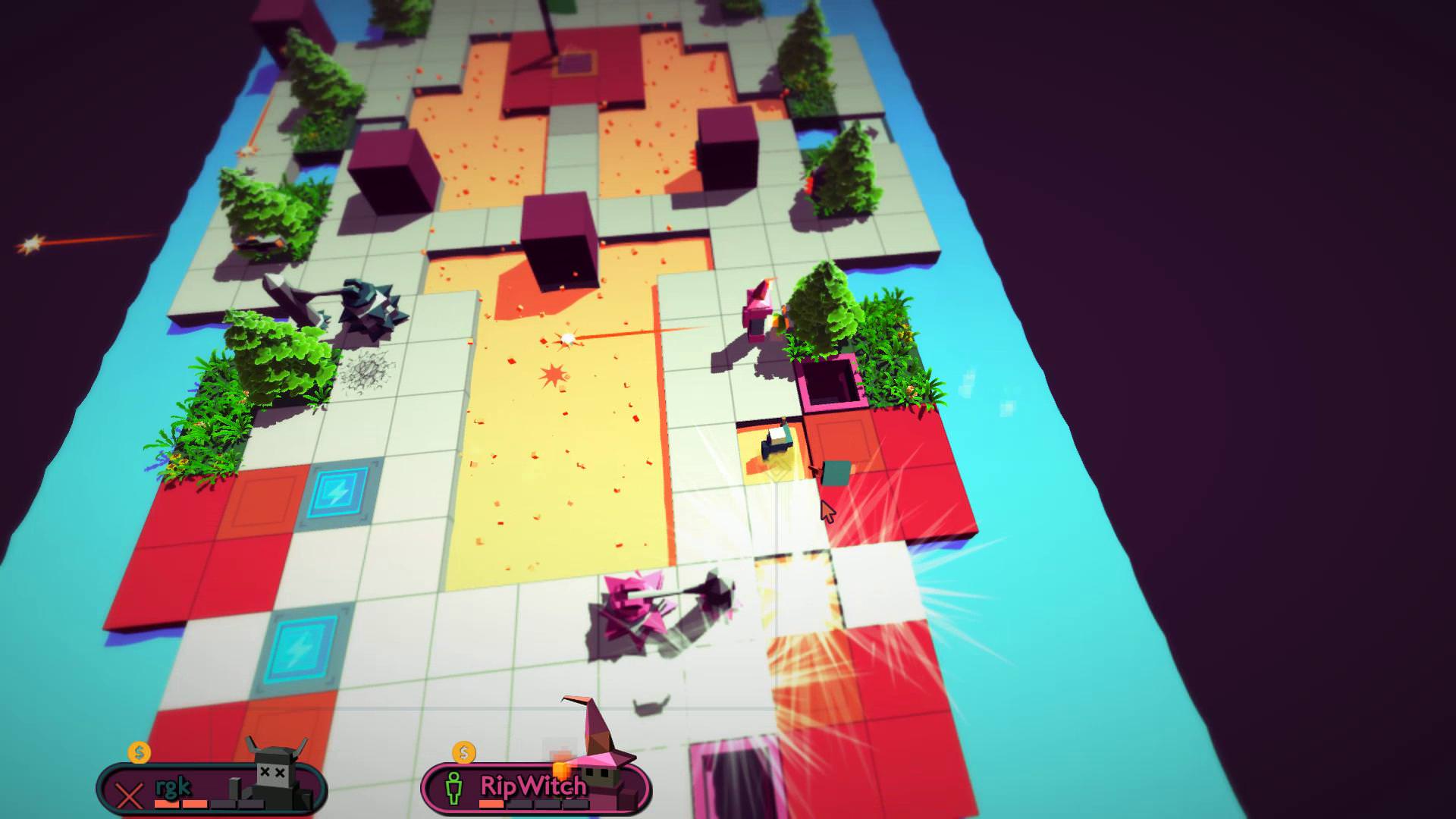 Trapper’s Delight is actually not great in local multi-player, the game reaches its full potential in online 1v1. Then it’s a lot of fun, laughing sadistically while outwitting your opponent or screaming your lungs out when you die from a hidden jumper that sends you straight into a lava pit. The game looks neat but often fails to communicate information in a clear way; added to the very awkward and limited movements it is hard to recommend it to everyone. A good but imperfect game that will have trouble reaching the wider audience. I’d still suggest giving a try if you have like-minded backstabbing friends, then there is potential for hours of entertainment.