The retro future is now: run and gun games at their best.

It Wasn’t Always Better before

Occasionally, I launch through RetroArch some old Sega Genesis / Mega Drive titles such as RoboCop vs The Terminator. While I enjoy the sprite work and feel, I only have fun for a couple of minutes until the approximate game design and dated level structure bring me back from the 90s. But now that I have HUNTDOWN, I can fully enjoy that 16bits era of time within a game that is undeniably excellent, benefiting from more-rounded modern design sensibilities… as well as from the crazy talent of the developers at Easy Trigger Games.

HUNTDOWN is not trying as hard as fellow modern/pretty action platformer Katana ZERO to tell a story. You (and a friend in COOP) choose a mercenary upon the three available and get offered a campaign in the form of 4 consecutive areas each populated with a unique colorful gang. The backstory is minimalist, and there won’t be more than a few occasional lines of text or short cutscenes to introduce new threats. The end of a level is always crowned by a boss fight against a “bounty”, often a gang leader that marked the level with their footprints. 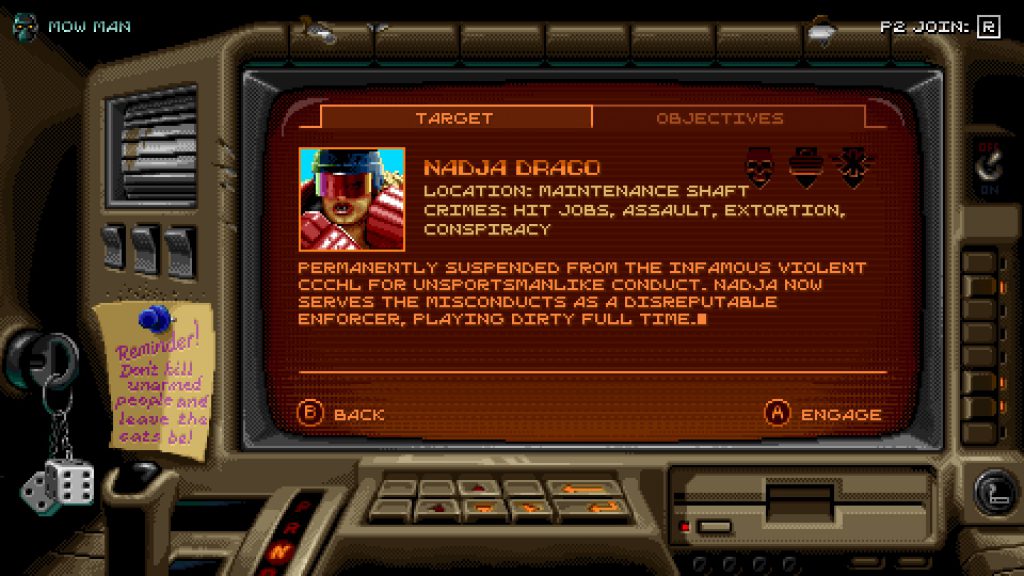 While the story is appropriately barebones (and consequently will not go in the way of replayability), the world, rendered in gorgeous pixel art, is incredible. This is a perfect melting-pot of Blade Runner, Judge Dredd, The Terminator, RoboCop, Mad Max, The Fifth Element, Akira, and everything that is holy from that glorious era of science-fiction movies depicting an ultra-violent future. The references are everywhere, in the gangs and their style, in the cool one-liners from the main characters or their bounties, in the music, and of course in the dirty neon-infused levels, as the fights will be taken from the subway to the rooftops. Even the fonts are totally on point! 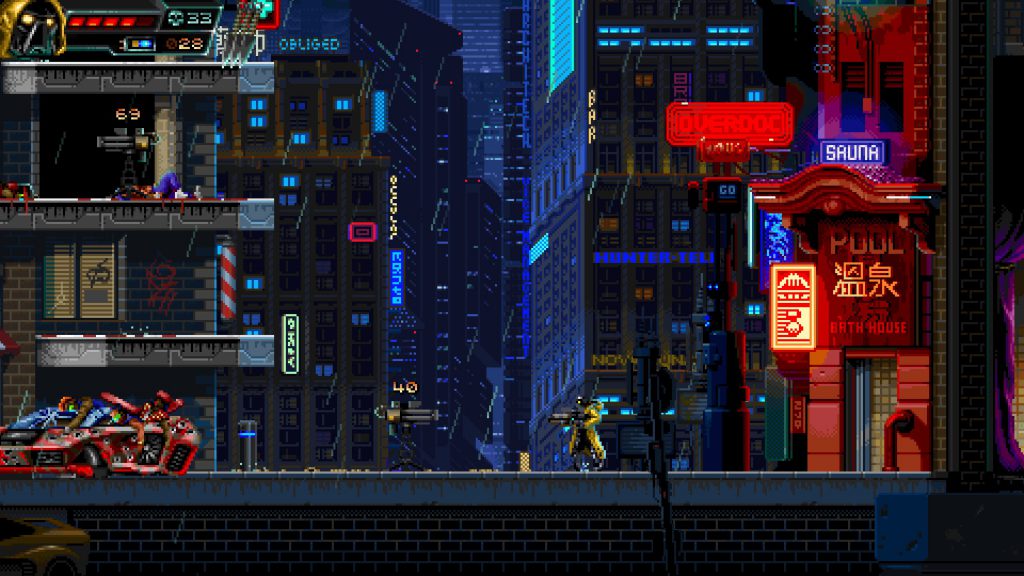 Gameplay-wise, instead of trying to emulate the rough edges of old games, HUNTDOWN removes multi-directional aiming to focus on horizontal aiming, but masters it. It is possible to dash or to take cover behind crates or within alcoves, allowing players to smoothly choose between frenetic jumping around in order to dodge, or smooth shoutouts from fixed positions behind covers. While these systems are often clunky in many games, in HUNTDOWN the controls are very intuitive and there is little friction between what players want to achieve/what they picture in their mind, and what they can actually perform immediately in the middle of a gunfight. 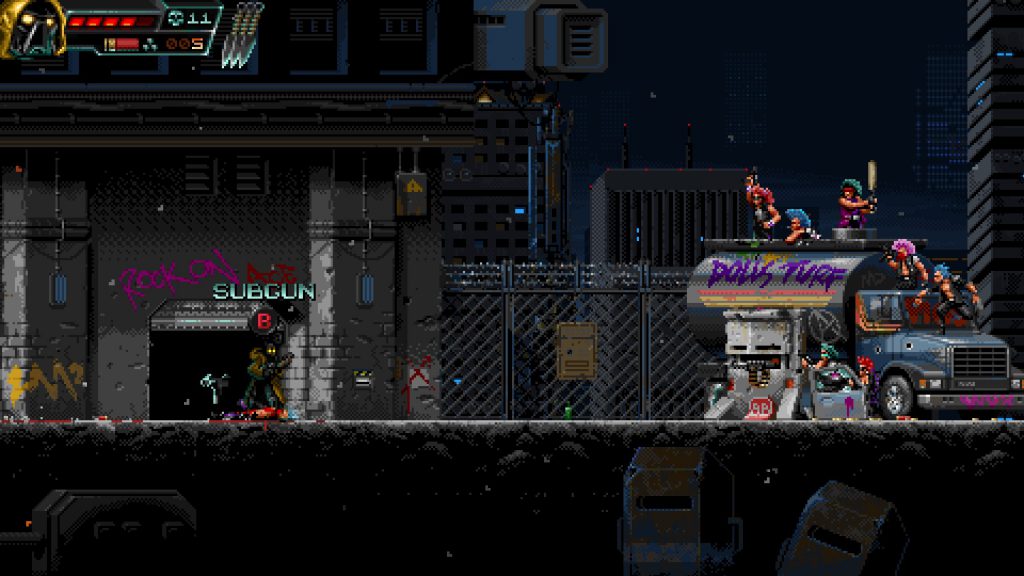 Each character has its own gun and an alt attack recharging quickly, so even after picking up a melee weapon there are options to deal with enemies farther ahead. Scattered across the levels are all kinds of weapons, from close-range shotguns that blow people to bits to destructive rocket launchers that blow people to bits; there are often several possibilities so players can pick according to their style or to their knowledge of the levels. I must admit that it is refreshing to play in hand-crafted levels rather than yet another repetitive rogue-lite game or a broken Metroidvania. Combined with tight level design and a huge variety of enemies and boss fights (each new boss encounter is pure bliss), we arrive at the best run and gun game that I have ever experienced since Metal Slug. Don’t get me wrong, this is not a replacement for Metal Slug and its huge boss fights with spectacular levels at breakneck speed. HUNTDOWN is another proposition, less free-form chaos and more toward grounded but tight encounters. 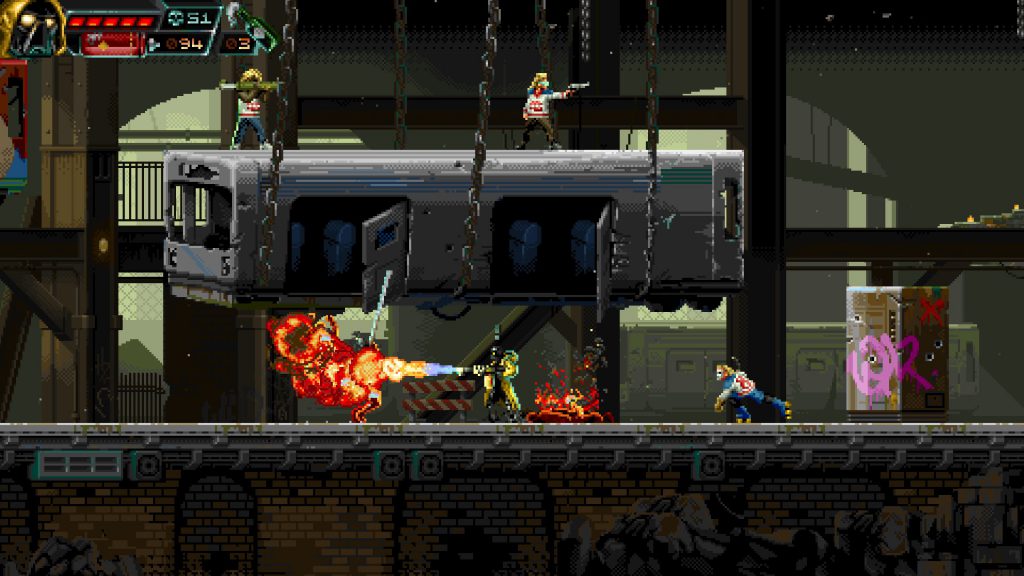 Death for All Tastes

Difficulty is a common hot topic concerning action platformers. HUNTDOWN’s difficulty seems as well crafted as the rest of this superb game, with a campaign that starts relatively easy but gradually ramps up the challenge (I just hate the jetpack enemies that explode at my feet). Each level provides a fair amount of checkpoints, so you never have to go back too far when you die, although it’s still better if you can anticipate the threats ahead (damn those bikes). There are also secrets (3 briefcases to collect per level), and the extra challenge of completing a level without dying, to earn a medal. If you don’t want to occasionally have a hard time you can start the game on Easy, but if you are looking for a spicier challenge, there are more brutal difficulty modes with fewer health points, giving you little room for error and demanding that you both anticipate the threats and play more technically with the game mechanics. Finally, there is an Arcade mode, in which you get a finite number of lives (you can find a few extra lives in the levels and checkpoints still help) and you are tasked to complete one of the four areas. The levels have been slightly remixed from the campaign, your time is displayed, and skulls and other items are contributing to your score (with a satisfying “ting ting ting!”) as you compete in the leaderboards. If you just rush through the story on Easy, there will be at least 5 hours of play. But if you want to get all medals and play on normal, we arrive in the ballpark of 10-12 hours, and then quickly more as you get into the higher difficulty modes and the Arcade. Since the story elements and cutscenes are kept in check, the game is highly replayable, and you might want to invite a friend to share in on the fun. 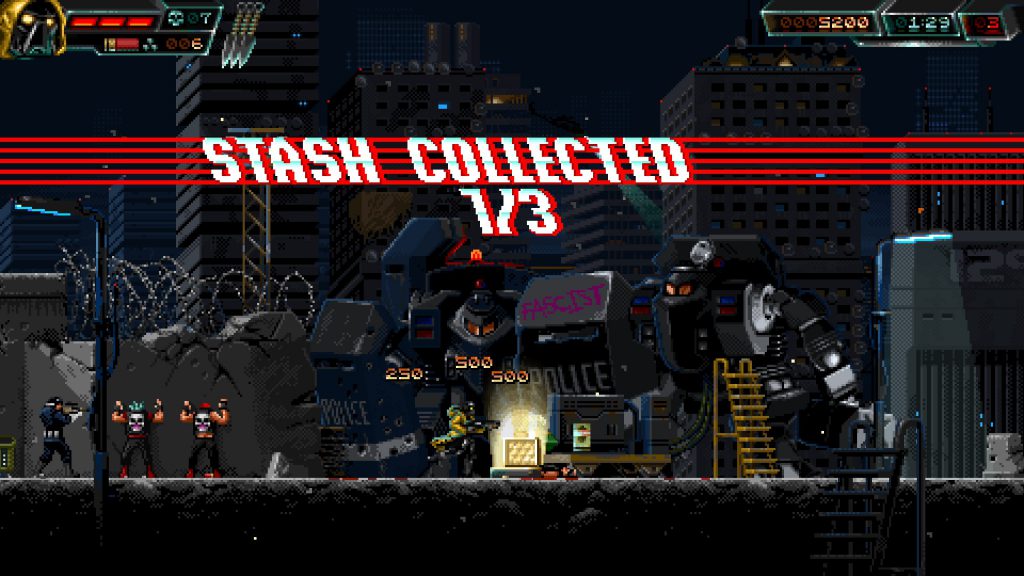 Once a player is down, there are 20 seconds to revive them by mashing the defibrillator over their fallen body. Otherwise, they simply have to wait until the next checkpoint. Coop is not available online (except through Steam Remote Play), only local. The keys are fully rebindable, and it is even possible to have two players on one keyboard. I just can’t find fault with this game. 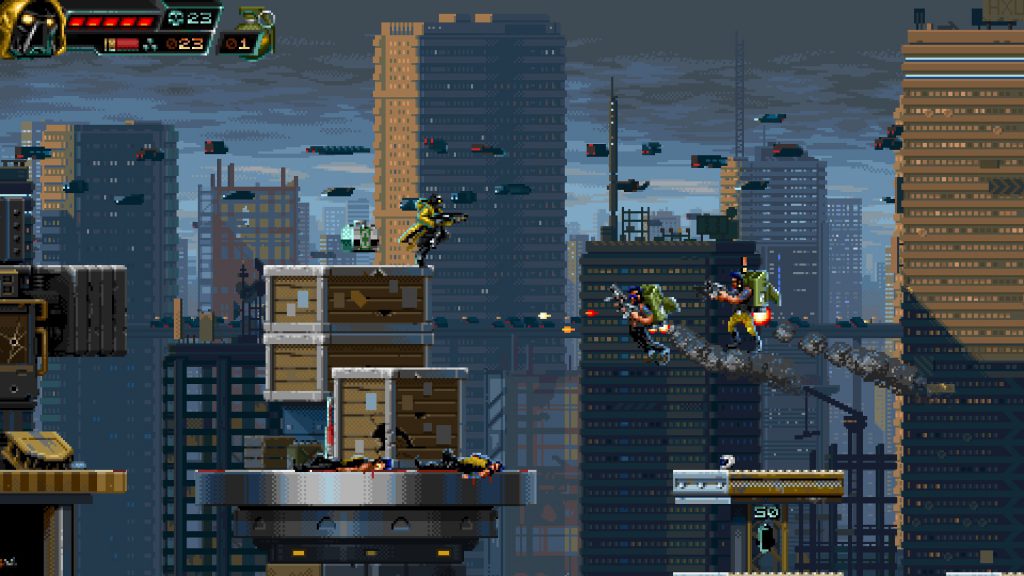 Oh, yes. The elephant in the room. First, this is an external issue and has nothing to do with judging the game on its own merits. Second, while it seems greedy for successful publishers with a hit on their hands to also take Epic’s money, smaller games and publishers always risk releasing their game in complete indifference on Steam’s overcrowded market, so Epic’s money is a safety net and a welcome financial security. At least, now the game is finally on Steam, and it deserves to become successful. Don’t pass on it, as even Electronic Art’s horrors find a strong audience on Steam despite forcing to install Origin: it would be unfair that the small devs get punished while the nasty companies thrive. 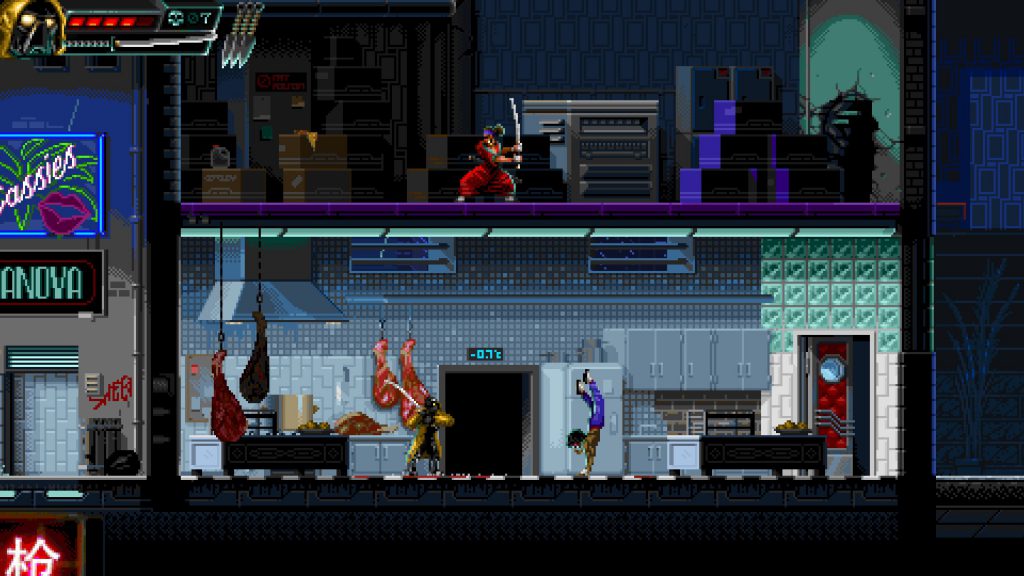 Do You Want to Know More?

Since we get here a crowning jewel in the run and run genre, you might be interested to get a few more recommendations to explore the genre on Steam. For explosive fun, there is the Metal Slug series (playable in coop), with Rive (not in coop) replacing soldiers with robots, or Intrusion 2 (not in coop) focused on physics-based interactions. For a more tactical approach with inspiration from 80s movies, Door Kickers Action Squad (coop). In between, Broforce (coop) is a bag of fun, with The Expandabros (coop) as a free appetizer. For a more cartoonish approach, there is the first Rocketbirds: Hardboiled Chicken (coop) and then the famous Cuphead (coop). If you are all about the challenge and tight level design, Mission: Ammuniton (not in coop). If you want to feel under pressure, OVERWHELM (not coop) is terrifying. If you want a gritty atmosphere, there is BUTCHER (not coop). I’m probably missing a bunch, please don’t hesitate to add more in the comments! 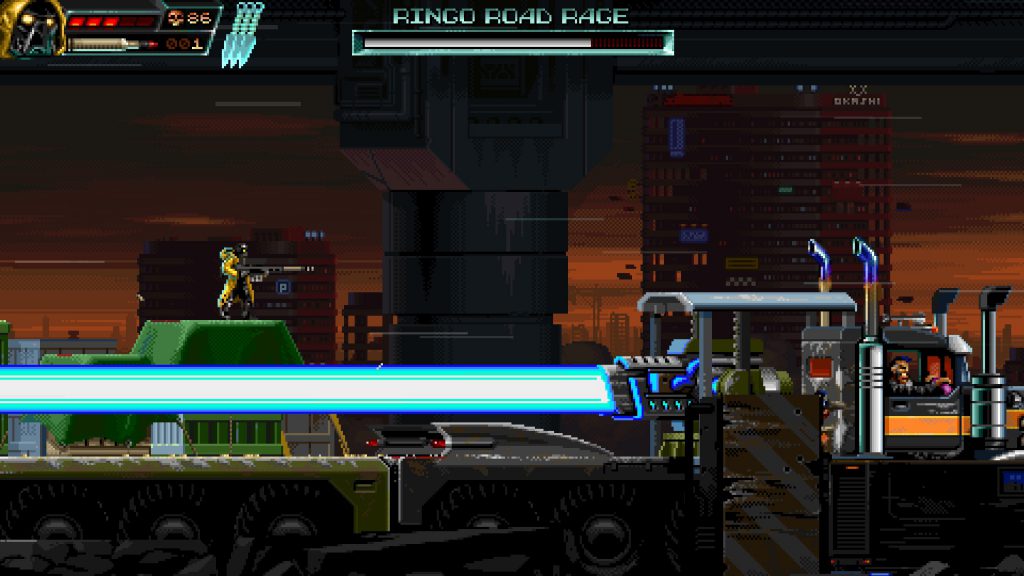 I occasionally had goosebumps while playing HUNTDOWN. Not only does it cater to my nostalgia of an incredible era in cinema and gaming, but it does so masterfully with its gorgeous pixel art full of incredible details, and its smooth gameplay that flows beautifully. Good run and gun games are fairly rare, but this one is exceptional. Well done Easy Trigger Games, HUNTDOWN is a masterpiece.