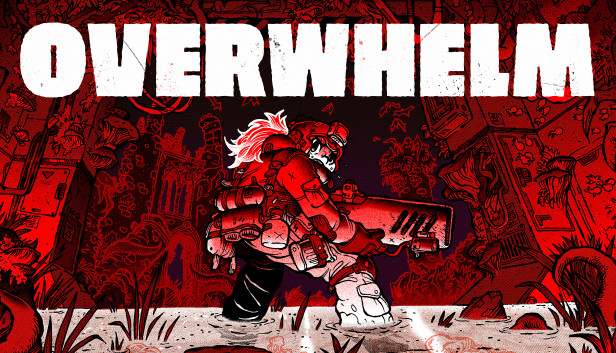 Prepare to be overwhelmed with stress and terror.

When Overwhelm was presented at E3, I was quite surprised to see such a little game (made by one person, with the help of a handful) in the middle of all those heavy-hitters. At first sight, this game does not look incredible. Only three colors, black red and white just like Downwell, minimalistic pixel art that will make haters frown as they grab their pitchforks. And yet, this spot at E3 was well deserved and the game deserves to be better known. With so little, it accomplishes so much…

Once I got around to play it, hands on it instantly felt amazing. Movements are very quick, jumps go far, and there is even a double jump. This double jump is different than usual, it’s a mix between a devastating punch and a dash with invincibility frames. Very very useful, and easy as it triggers either by pressing jump a second time or by aiming with the right mouse button. Ah yes, by the way, this plays perfectly with mouse and keyboard even though gamepads can be used too, and it’s possible to rebind all the keys. I like my jump on W rather than the spacebar. Finally, there is a very powerful rifle that cannot be spammed in full auto, each shot has to be deliberate at a rhythm of one per second or else it can jam. 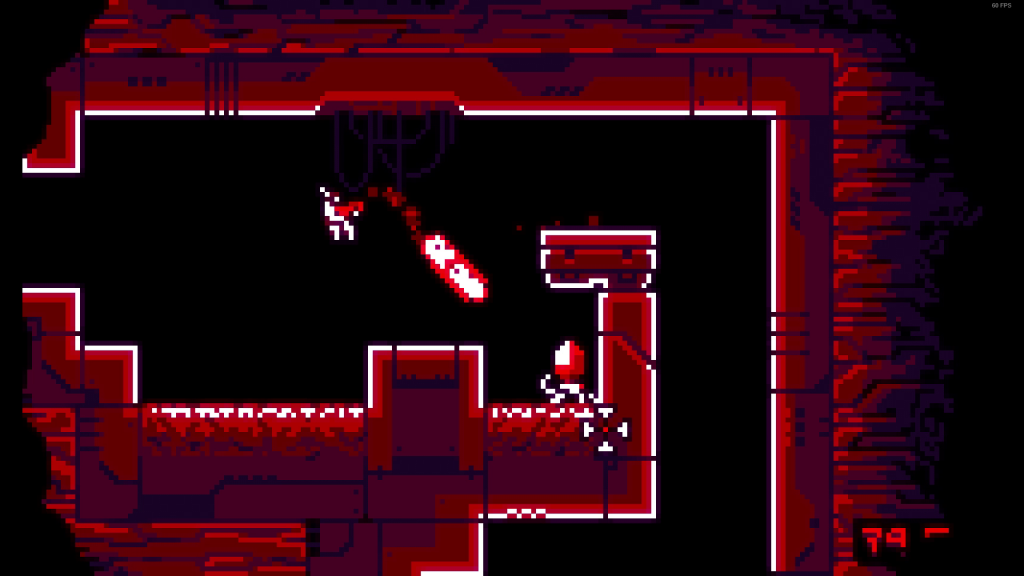 And then, what are we doing with all that firepower? Our main character is some sort of knight sent to destroy some sort of extra-terrestrial hive. For that to happen, you will need to beat five bosses in a small Metroidvania map. Beware, that’s where the complications start. There are only 3 lives, and a game over is definitive, you have to start over and beat each boss again. Over and over until you succeed. Generally, I hate this concept, especially in a Metroidvania because it implies a lot of backtracking. I complained about Hollow Knight for similar reasons, and yet I am about to defend this idea in Overwhelm. 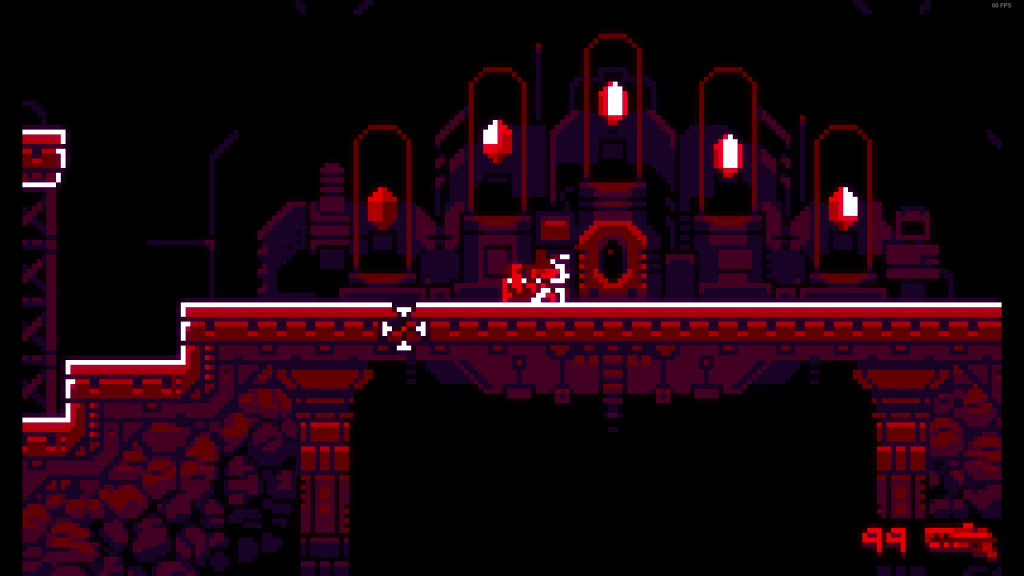 First, checkpoints are very common, so each time that you die you don’t have to go far. Against a boss, you appear right behind the door ready to knock. What about the three lives then? Actually, they can be reset each time a boss is beaten, or whenever a boss crystal is brought back to base. Which means that the player is frequently switching from the state “I have three lives and I can take risks” to the state “I only have one life left, tension is overwhelming, I became paranoid and check every corner before making a step”. 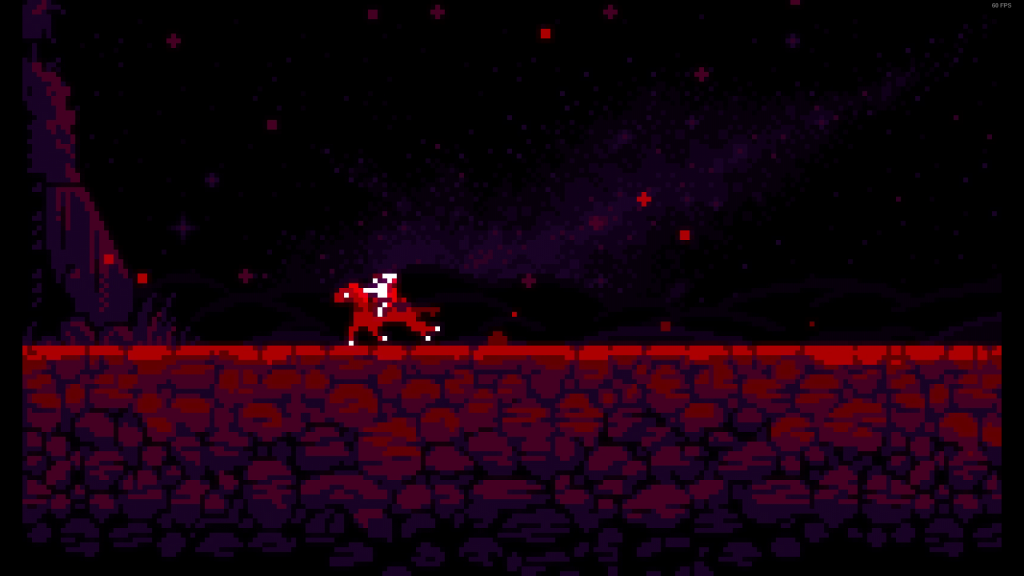 Regarding the Metroidvania aspect, the game is actually rather small and the paths are pretty clear, so it’s neither boring nor confusing to move from one area to the next. However, each time you beat a boss then the difficulty of the game increases in a way that is unique for each boss. Some cause new enemy types to appear, some give new capacities to basic enemies. And thus, even though you are backtracking, you feel that it’s completely different because the enemies have changed. 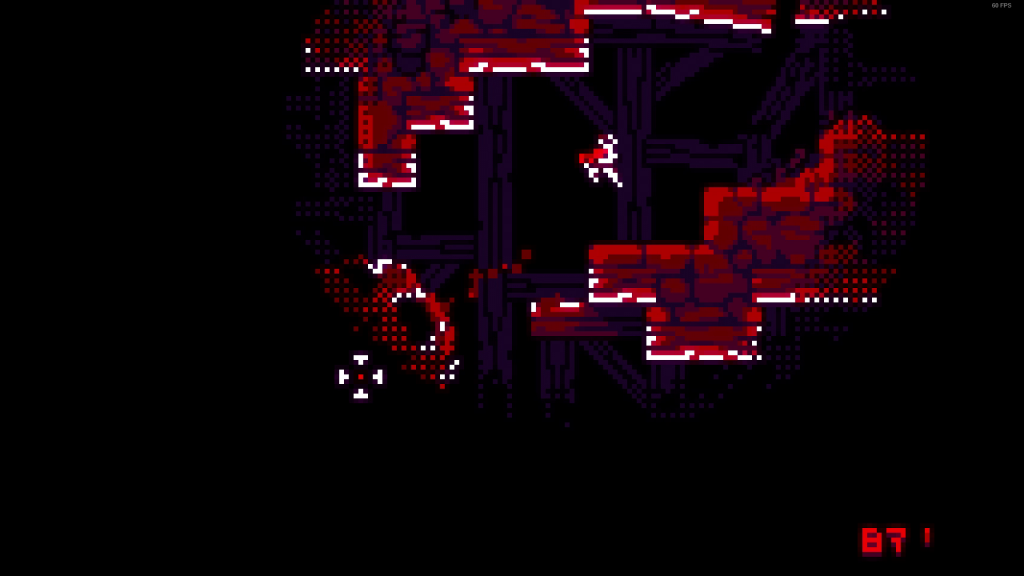 Additionally, enemy positions and their behavior are also subject to change. That might seem unnerving, as usually in most games enemies are always located at the same spot and bosses fight according to predictable patterns, and we rely on our muscle memory to prevail. We know when and where to press a button in order to get past an obstacle. In Overwhelm, this is impossible. Some enemies are often here but not always, others are more to the left or more to the right. And most importantly, most enemies leap on the player in a very unpredictable manner, which makes them extremely dangerous. Same for the bosses, most have unpredictable movements or behaviors, and sometimes the game makes them disappear and reappear for a split second to disorient the player. Special mention for the ant that hides behind the background to surprise the player. And due to all of these erratic and surprising behaviors, it’s one of the most terrifying experiences I have ever played. 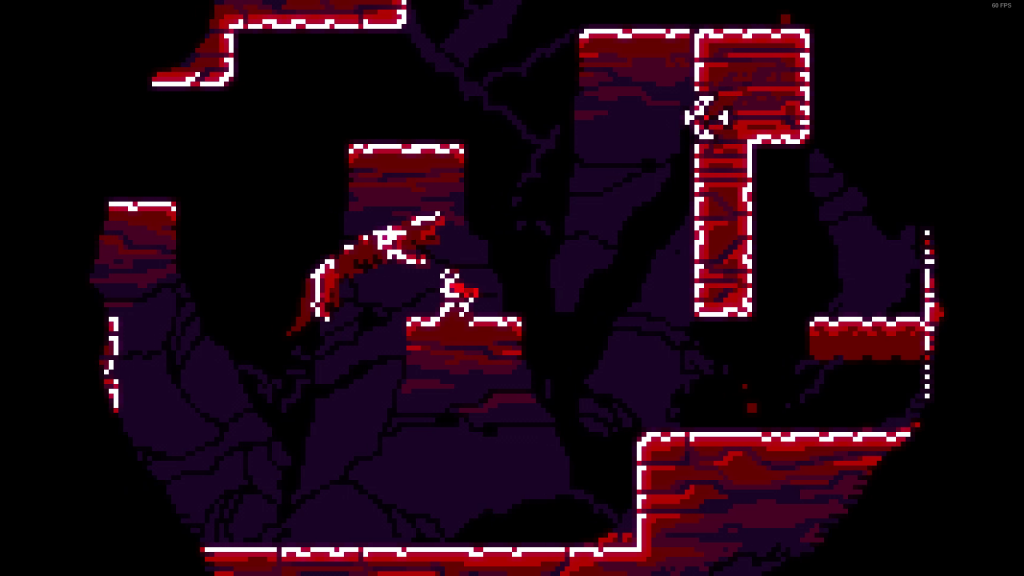 What are humans afraid of, generally? The unknown, and by extension uncertainty. Overwhelm mixes up uncertainty of enemy positions with the violence of their attacks, the tension of imminent death with lost progression, and minimalistic graphics that let imagination paint the rest rather than well-defined shapes which would lose their evocative power. In other words, playing Overwhelm is like being in a vivid nightmare. 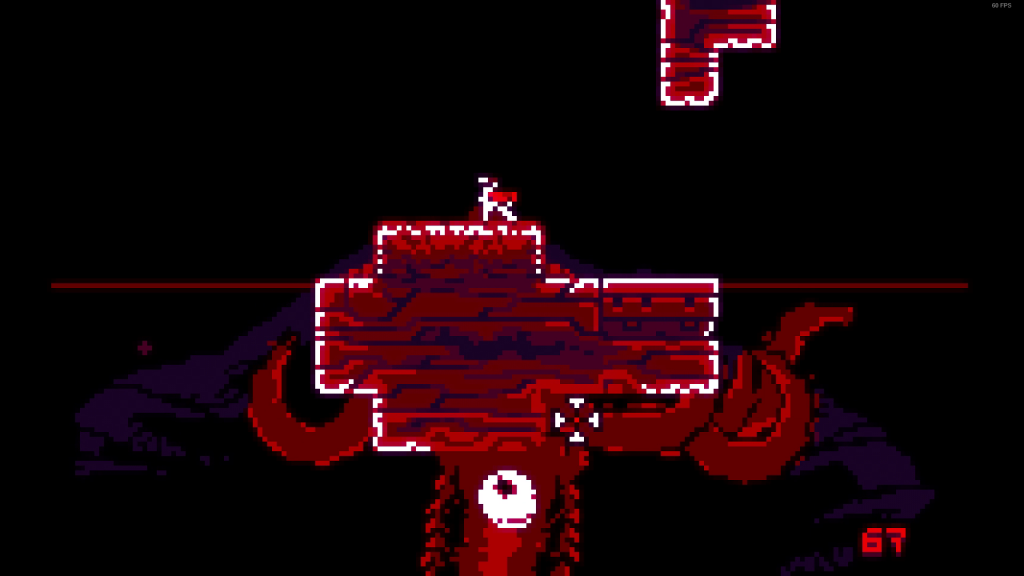 Going back to the loss of progress, the game is not disrespecting the player. I talked about frequent checkpoints, but it’s also possible to choose a previously beaten boss when restarting the adventure. It allows practicing, as well as gaining a little bit of time when starting over. And even though beating the game is very difficult and very few will succeed, it’s still a great experience to explore it and be content with the objective of killing each boss only once. In my opinion, I don’t think that loss of progress here is so detrimental to the enjoyment as players can already experience the whole content however they wish. It’s not like a roguelite in which you have to survive for a lot of levels in order to see everything that the game has to offer. Still, I know that this restarting business will not please everyone and some will hate the game for it, but I hope that I managed to explain how it is essential to the game design of Overwhelm and, for once, used to great effect. 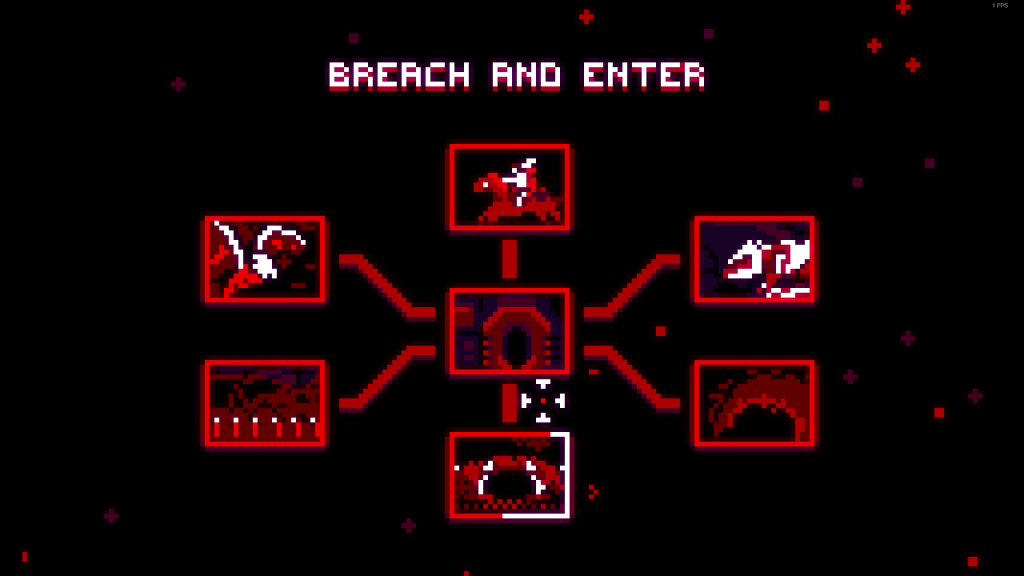 There is a sentence that I often see to describe Overwhelm, it’s that it is a reverse Mega Man in which enemies become stronger rather than the player. And not only is it exactly that, but also, it’s clearly a strong point of this game to encourage players to figure out in which order they will evolve the hive. Should you start with a boss that you often struggle with, or prioritize enemy upgrades that are less annoying to deal with? Also, keep in mind that some areas become much more dangerous according to some specific enemy powers, and maybe you should complete them before the rest. I found this strategizing over the order in which to play absolutely amazing. 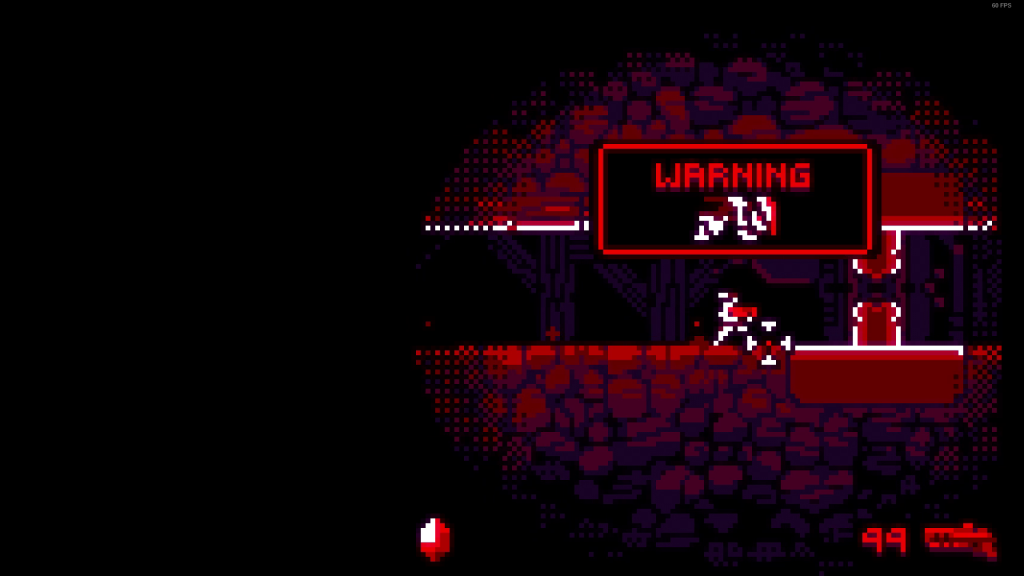 The true worst enemy is the camera

Now that I hopefully succeeded in defending the indefensible, I will still criticize something in this game. There is one single element that can sometimes destroy everything that the game managed to achieve. That nasty troublemaker is the camera. For each death in the series of 3, the sides of the screen are blackened, which reduces sight in an already exceedingly dangerous world (and hides ammo count). And even under normal conditions, it can happen to die from enemies out of sight who jumped from the ceiling and leaped from right after the side of the screen. Even worse, there are moments when the camera is not centered around the player, such as a passage between two areas. The character can be found almost hugging the screen while there is an enemy right behind, and that enemy would be clearly visible if the camera was centered! And this is unacceptable. It is responsible for moments when the game was unfair rather than the player not skilled enough, and approximations like that have no place in a game that is so difficult and punishing. Yes alright, after a while the player learns the places where such dangers can occur, but this issue breaks the rest of the tacit rules between the game and the player. 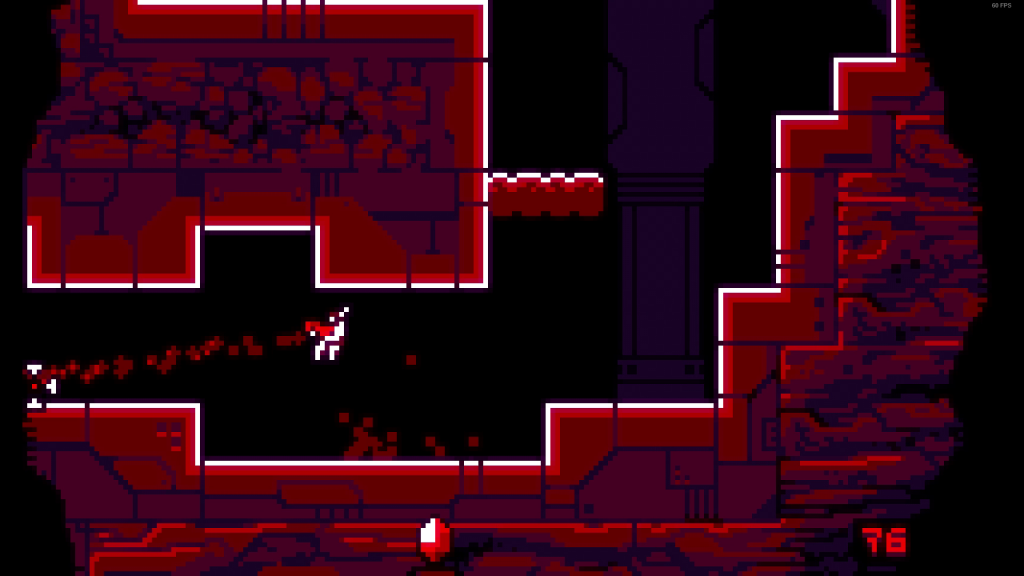 Besides the sometimes flawed camera, I find this game to be a little gem. I was utterly enamored with it and could not rest until I completed it. Overwhelm can be finished within half an hour if you manage to succeed against all odds, but you should prepare for long hours of patience and surpassing yourself for that to happen. If you simply want to enjoy the experience without finishing the whole game in one go, it’s perfectly fine, the game is worth it. Overwhelm is an amazing nightmare, and one of the most terrifying experiences I ever lived in a game.

If my arguments about some particular game design choice failed to convince you, please know that in the options you can fine-tune the difficulty… for example with infinite lives, if you really must. Kudos to the dev for not being an elitist prick.