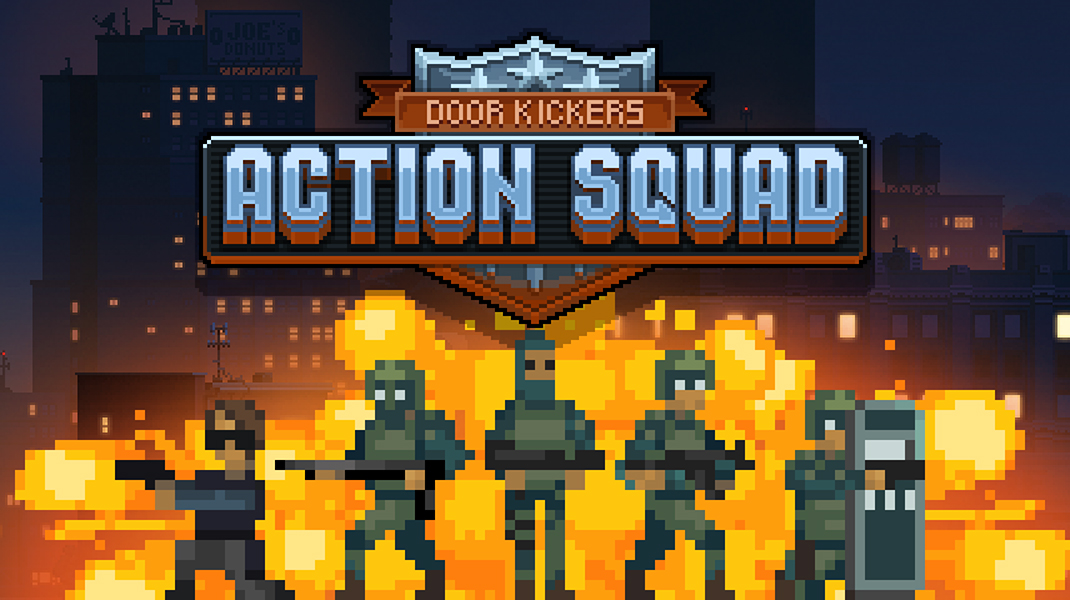 The day I first heard of Door Kickers: Action Squad, I was reviewing Trespassers. Another cooperative 2D shooter, also very pretty and it played well, but that game was ultimately doomed by its boring level design. And then when I saw a friend playing the early access of Action Squad, I noticed that it looked the same: entering room after room while shooting left or right, without verticality or varied enemies to alter the pacing. Thus, I was very skeptical and lost interest in the game until the end of its development cycle and its release on Steam. I am at last glad to report that Action Squad is much better than I anticipated.

Door Kickers: Action Squad is a spin-off of Door Kickers, a SWAT game from a top-down perspective. This was a very tactical game, designed with turn-based actions. Action Squad brings the franchise to a side-scrolling perspective, and the word “Action” in the title is also not there for nothing, as the game feels closer to Broforce than its predecessor. But that’s not to say that nothing of Door Kickers was kept, this spin-off is also a game with a good measure of tactical possibilities. 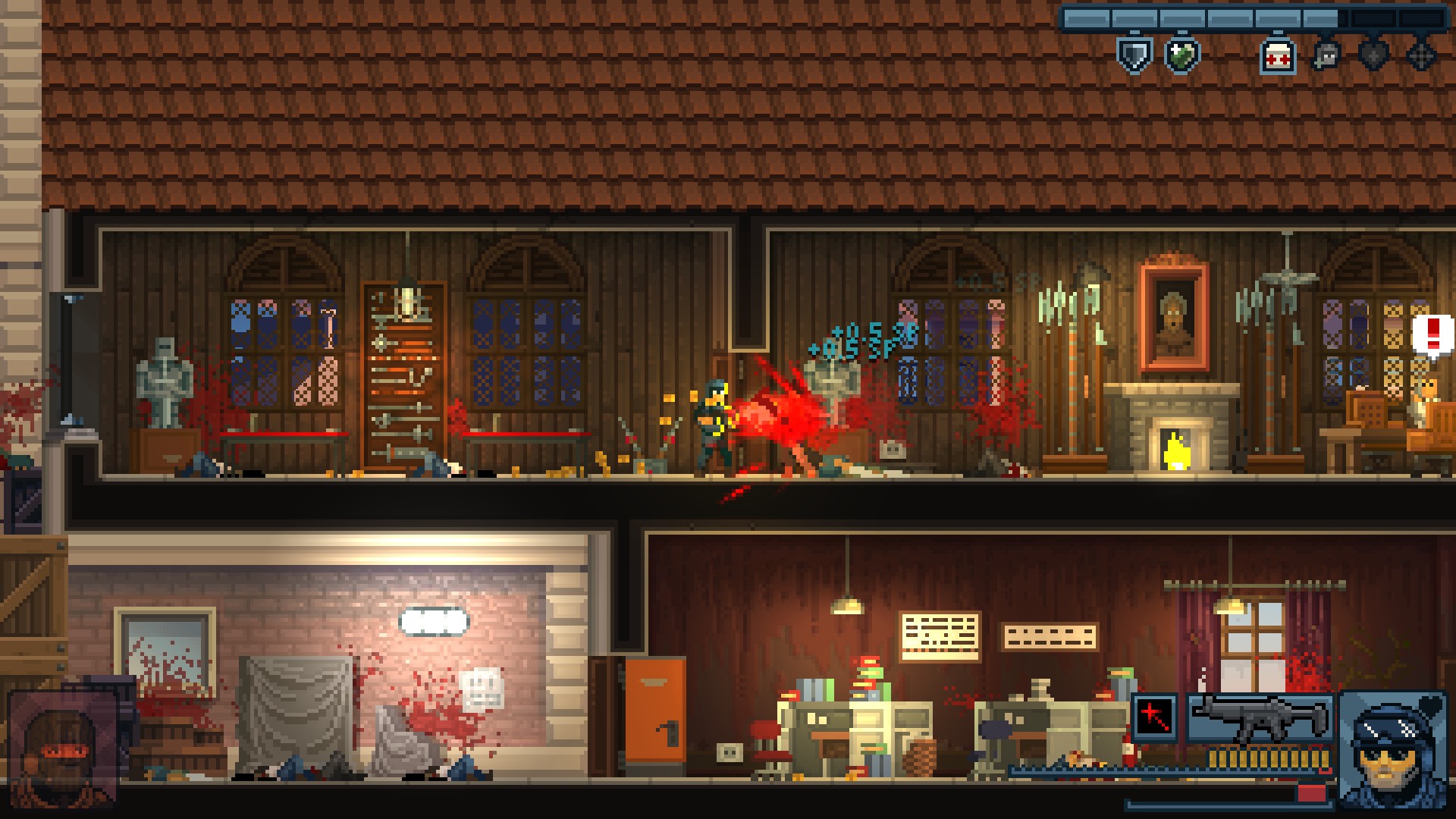 Alone or with a friend, local or online, before each mission the players can choose a cop character between several classes. The recon is fast and makes less noise when opening doors, the breacher is specialized in devastating shotguns, the shield only has a pistol but is heavily armored, and so on. Completing missions grants stars that can be used to purchase permanent unlockable gear such as flashbang grenades, armor vests or powerful rifles. There is also XP and leveling to give stats boosts such as more health, or new effects such as knockback. I am in two minds about grinding for gear and skills.

My complaints are not really annoying flaws, progress happens much faster than in games with micro-transactions. Also, overall the pros outweigh the cons, and I wouldn’t want the system out of the game. 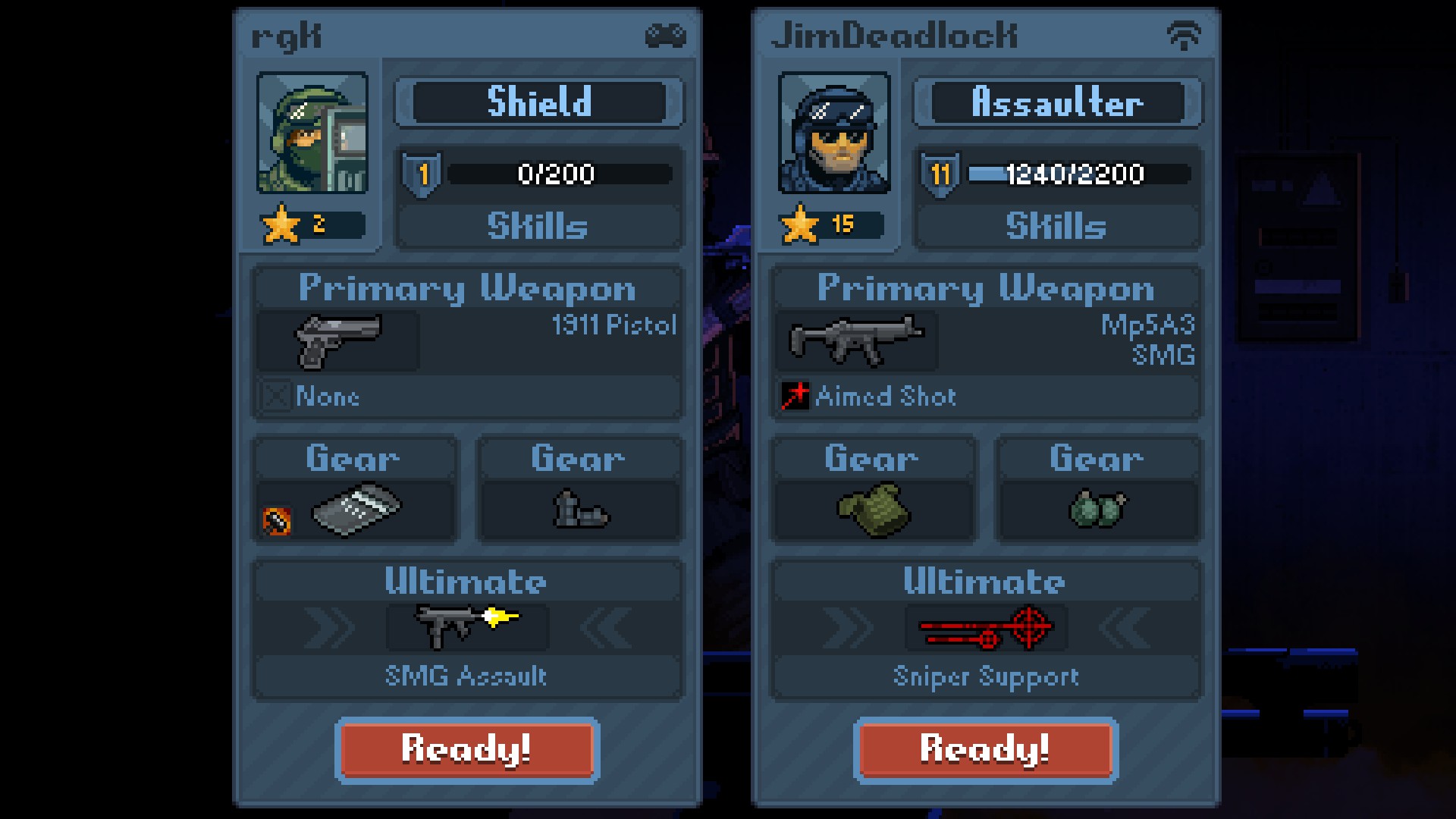 The missions themselves revolve around a few different objectives, such as defusing a bomb before killing all the enemies, or rescuing hostages. Killing enemies might require cops with better firepower while rescuing hostages might require more precise rifles or flashbangs: the objectives clearly impact character picks and tactics, which is a good thing. Regardless, some characters can be versatile enough for all situations, such as with an alt fire for their rifle to switch between full auto or one precise shot slightly above the head of hostages. But some wrongdoers can snatch a hostage, and if you don’t have non-lethal tools at hand you will have to act with extreme caution. Losing a hostage is not an instant game over, it just means not obtaining three stars for the level. 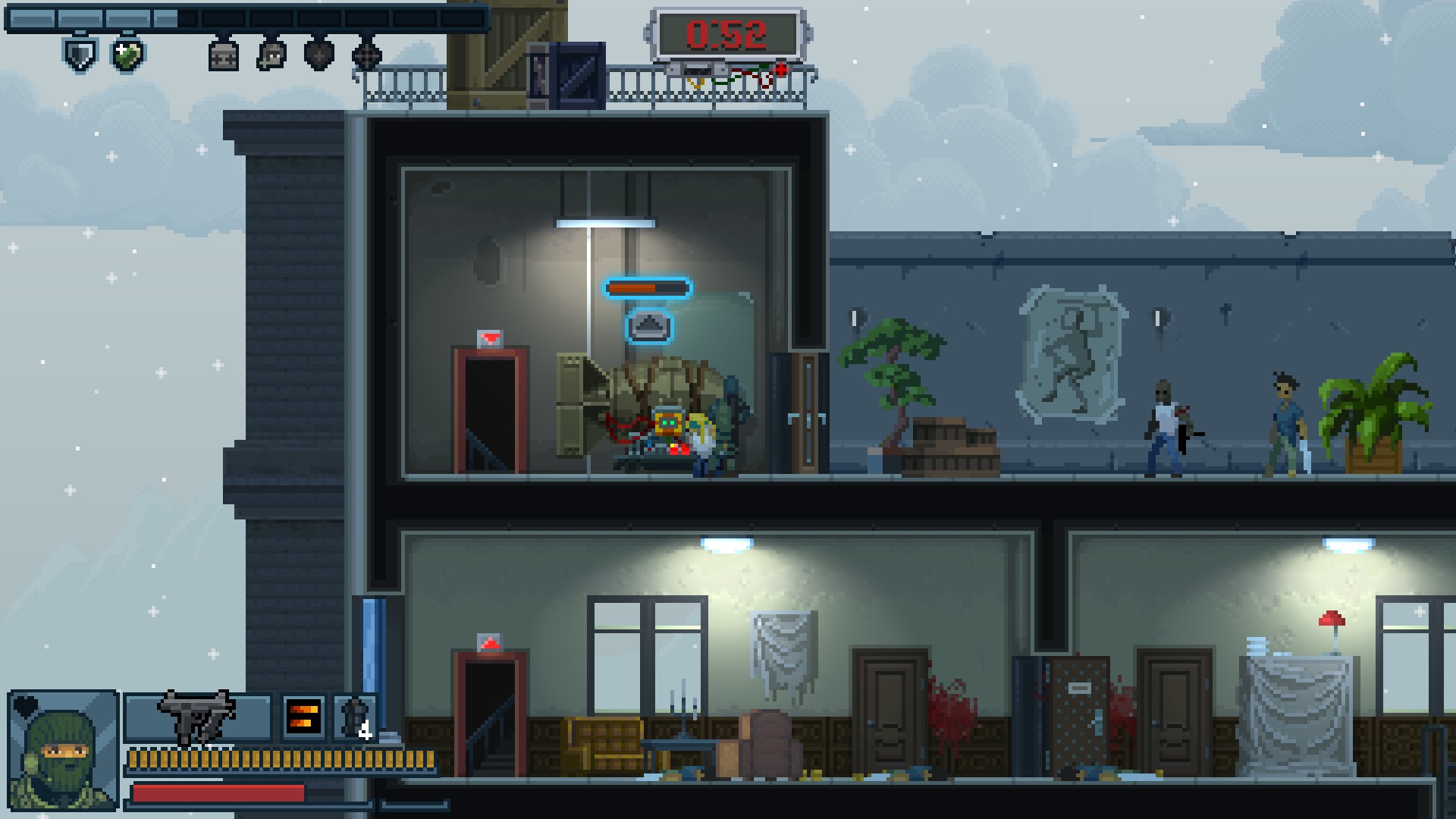 Unlike other 2D games with a flat field that only requires twitch shooting, Door Kickers: Action Squad has doors in its title and its levels. This means that the line of sight is often broken, and players need to get up close and personal. Often, the threat behind a door is known; however, sometimes there is no light in the room and anything can be waiting behind the door. Blind fire can lead to the death of hostages, so it’s better to come up with a plan of action and be ready to change it on the spot. Combat is quick and yet not immediate, most of the time. Both players and enemies can survive several hits, except from some specific attacks. The biggest danger is to get caught by surprise, even worse when it’s while reloading a rifle. Therefore the game does not revolve around running and gunning, it’s more of a stop and go approach: examine your environment, prepare yourself mentally, open the door, quick deadly fight. The levels are not randomly generated, so it’s always possible to learn enemy positions before attempting the level again. Some levels require backtracking, such as collecting a key in a basement before going back up to unlock the ground-floor door. To prevent them from being an uneventful stroll, there are specific doors unloading new enemies even after the area has been cleared, making sure that the player never goes too long without a target to shoot at. 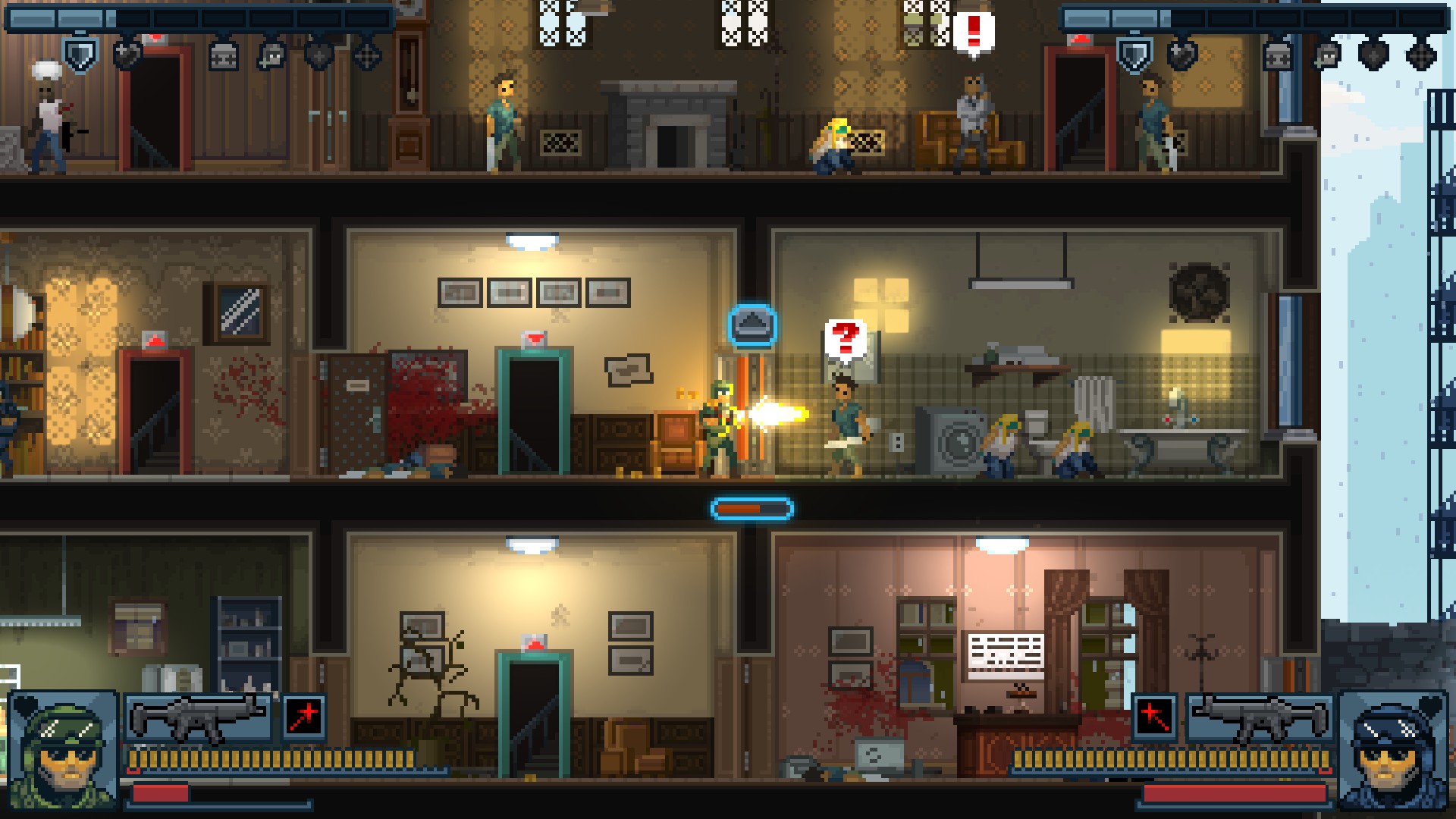 Challenging but not too difficult

During a mission, clearing enemies or freeing hostages earns points that can be instantly spent on bonuses such as medkits or sniper support. This offers a new means of survival or of solving difficult rooms full of hostages and enemies, and once again it contributes to the game sometimes feeling easier than it should, as long as you are always methodical. However, even with these perks, some levels might require several tries before completing them with 3-stars, and due to the repetitive nature of the game, I was glad not to have to repeat missions too many times. 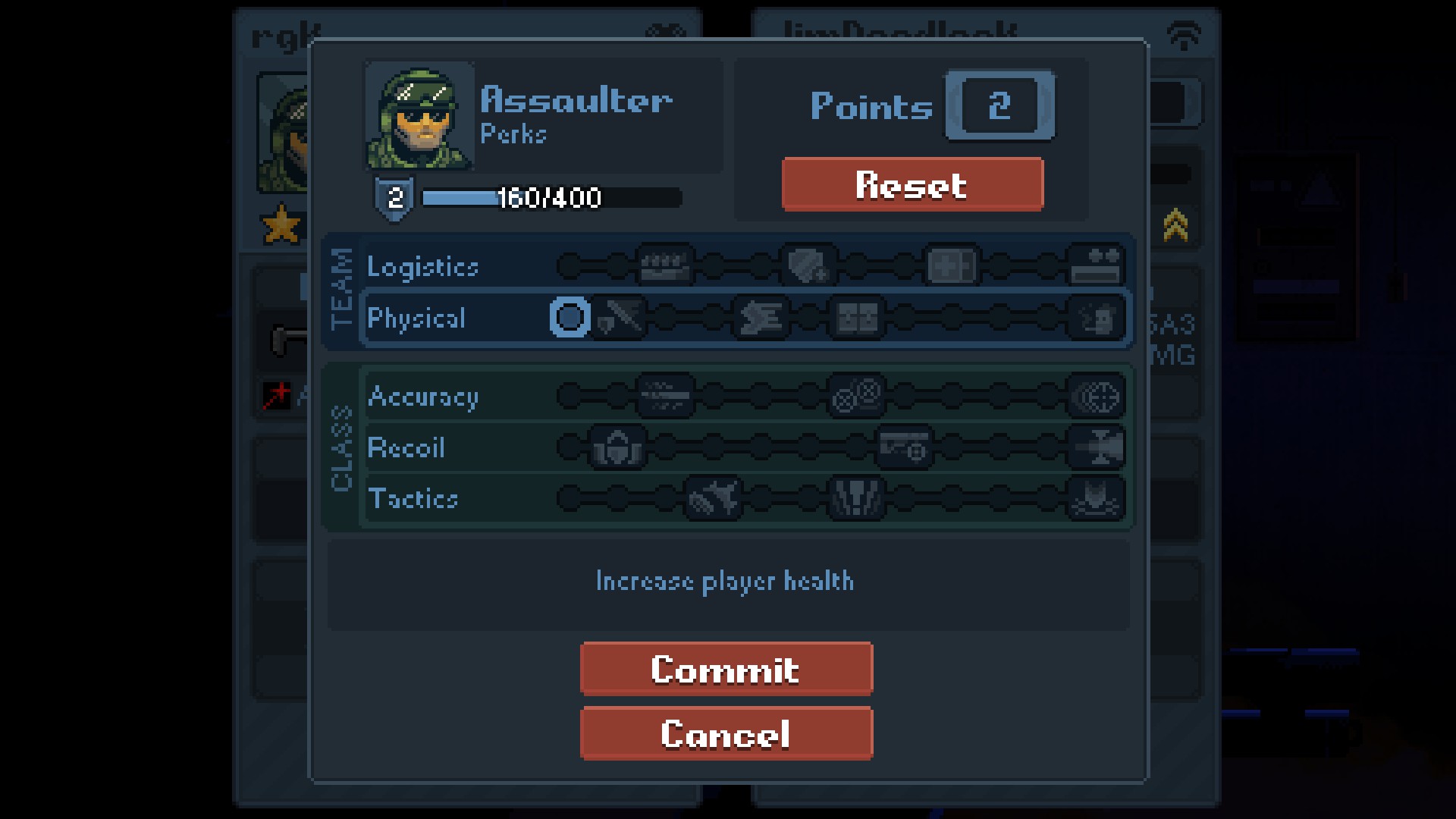 A realm of possibilities behind the doors

While the game tries to vary its level design with elevators or windows to break, the gist of the game is still always breaking and entering. It’s not like a Metal Slug with cinematic assaults, set-pieces and boss fights. Still, the game manages not to feel boring because of variation in its objectives, new enemies appearing (such as a kamikaze), all the different classes, and little details here and there, and most importantly the stop and go pace. Tension rises and drops, it’s not a dull flatline. And while there are so many levels in the first place, a Zombie mode offers a remixed version with new threats. There is a remarkable amount of content there. 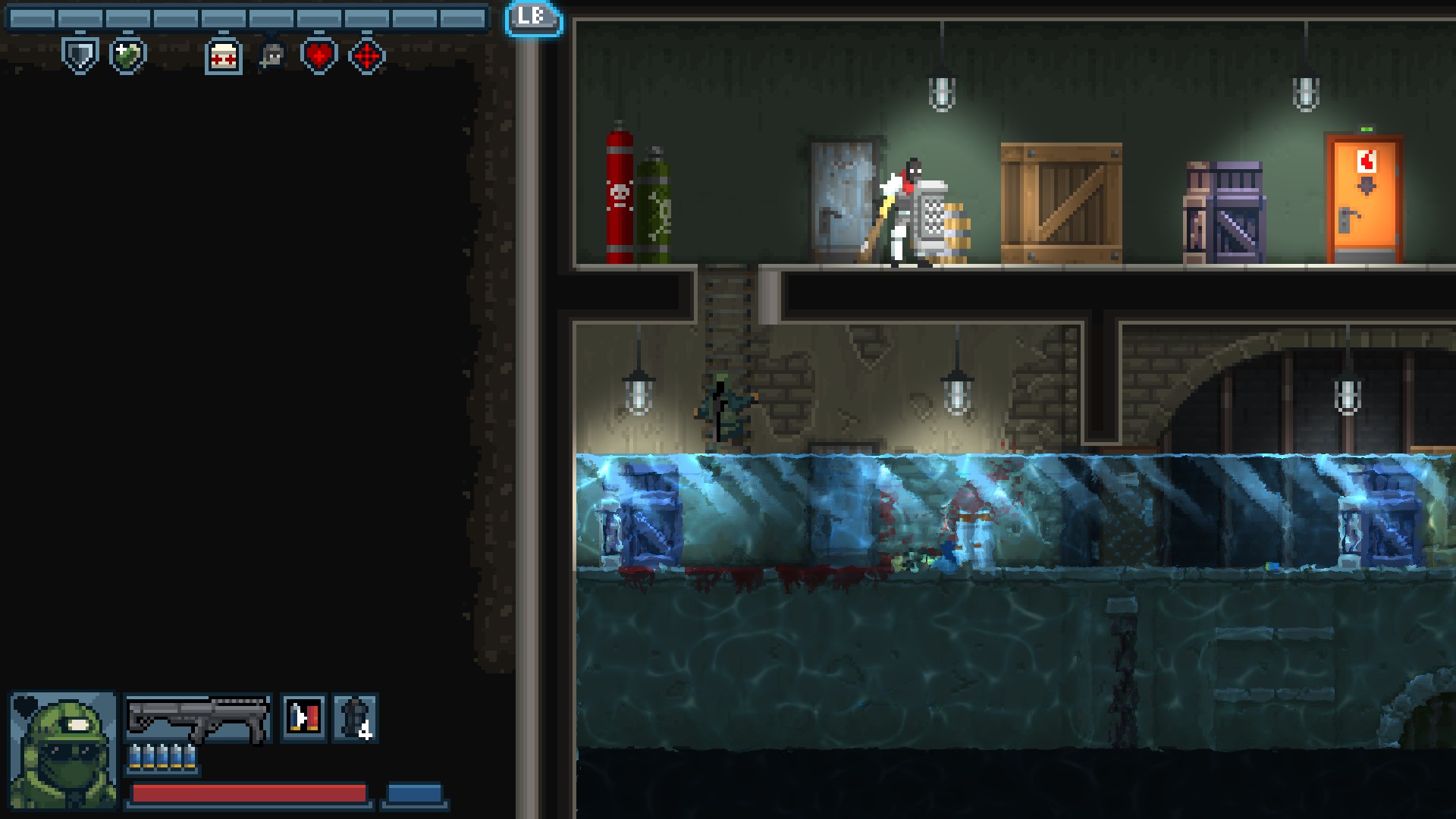 Better with a friend

Since it’s not often possible to have players attack from opposite sides of the room, our COOP tactics were based on one player opening the door and then reacting according to a pre-established plan. There might be one player sniping while the other quickly dispatches enemies rushing with a knife, or one player protecting the other with their shield. Single player is already pretty good in the game, cooperation makes it even better, and we absolutely loved the experience. If you like these sort of games and you have a COOP partner, whether online or offline, this game is an absolute must-have. 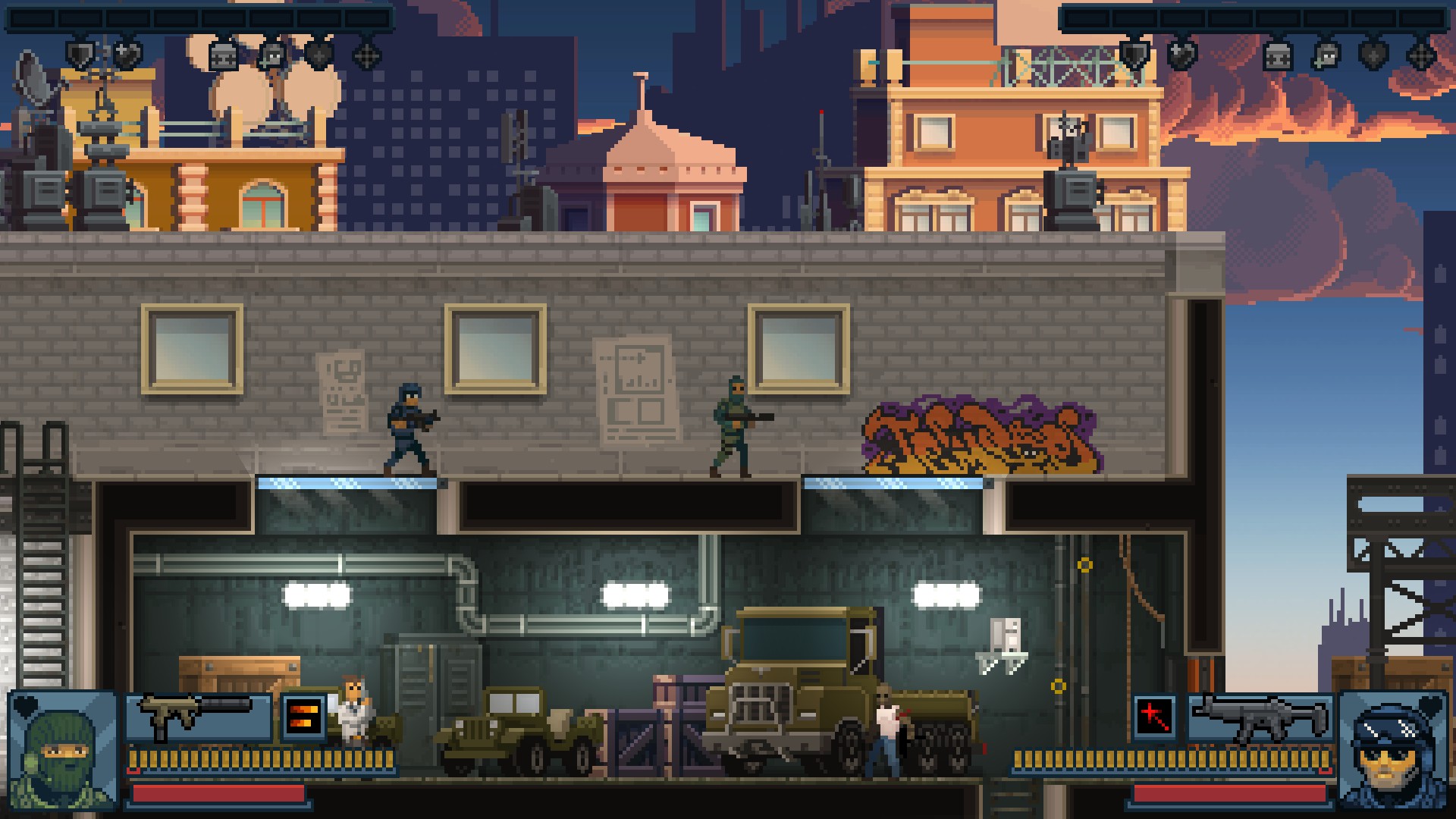 The pixel art is great, enemies are easy to tell apart and the environments are beautiful as well as detailed. This really helps get immersed in each mission as a separate entity rather than simply a new set of rooms. An 80’s vibe completes the picture, with blonde bimbos to rescue to the tune of an energetic music. The game runs flawlessly on Windows as well as on Linux Steam Play, so my only technical regret will be that it was impossible to bind actions to the mouse. Even when I don’t aim with the mouse (which I would have appreciated even if it’s just left or right), I like to use its buttons in combination with the keyboard. It’s possible to play the game with two players on the same keyboard, but gamepads are definitively more comfortable here. 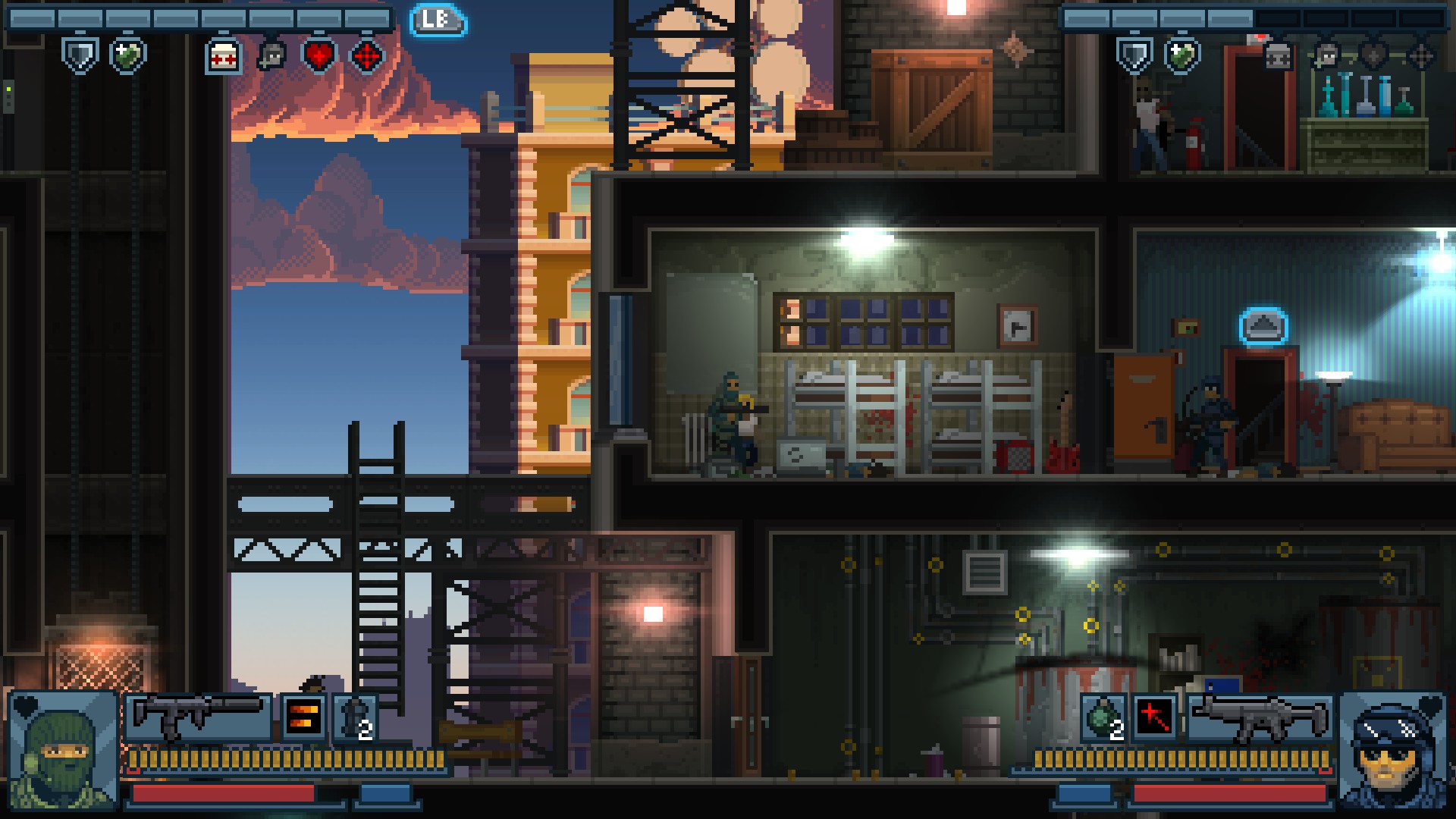 Door Kickers: Action Squad strikes a perfect balance between action and tactics, with the tactics giving rhythm and intensity to the combat. The levels might overuse the breaking and entering trope, but it never gets old when it’s coupled with a ton of content with many classes, enemies and gear. Alone it’s a good game, but it really shines as a duo of organized and deadly cops.