Contrary to what the title leads you to believe, BUTCHER is a game about collecting flowers in a meadow. You get 10 points for daisies, 50 points for dandelions and a crowning achievement plus 1000 points if you find the elusive rose. If you actually liked this idea of a game, get out. BUTCHER is not for you. BUTCHER is hard and unforgiving, and will let you scream in pain from a shotgun blast before splattering your organs on the walls with a chainsaw.

Unlike polish developers Transhuman Design’s previous games Soldat and King Arthur’s Gold (2D multi-player classics), BUTCHER is a single-player throwback to the nineties and more specifically Doom and Quake. Teleport to gothic industrial space stations and mow down bad guys. The feel of the weapons, the secrets, the music and even the menus are all evocative of the aforementioned First Person Shooter forefathers. What else BUTCHER has in common is a tough difficulty that requires skill and quick reflexes above anything else. You pay dearly every mistake as death forces to restart a level.

Very much like Hotline Miami, it becomes important to strategize a little bit before a gunfight by knowing where the enemies are and which weapon they wield, then get in with the appropriate murder tool and swiftly take care of the threat before a new one appears. The arsenal comprises shotgun, flamethrower and railgun. Every weapon has its use and feels great to use with damages tearing soldiers apart while the screen shakes to emphasize the violence of the shot. Unlike Hotline Miami, most levels feel the same and lack a little quirk to separate one from the next. This probably stems from the locations, because it is hard to differentiate one military base from another. Especially if you painted all their walls red with the blood of your enemies. Thankfully, a few levels look different such as the Jungle and the City, but still not a massive difference. Everything is bleak and dark, the game really sticks to its theme all along. 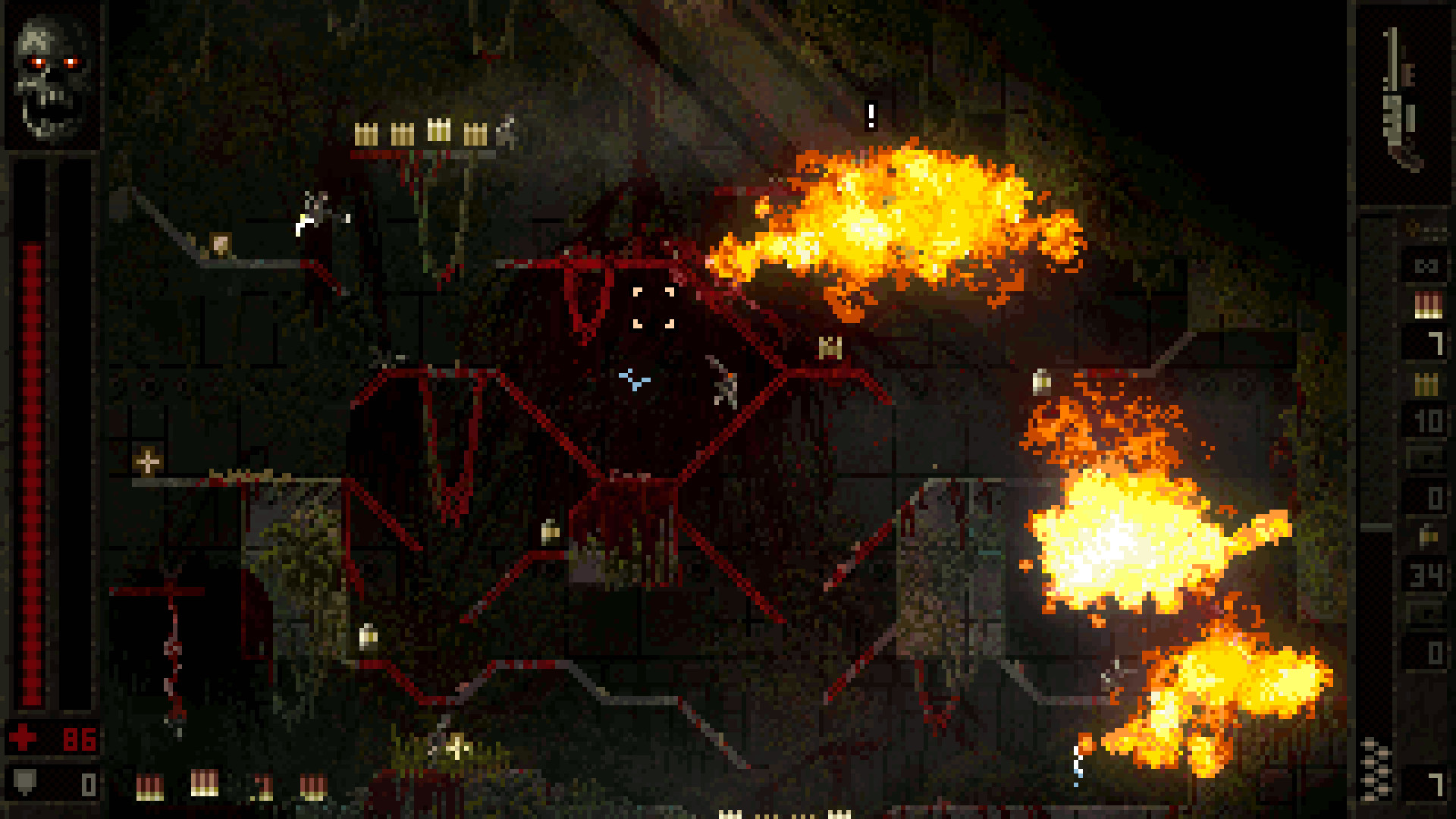 An important part of filthy and disturbing atmosphere stemming from the game comes from the divisive art style. Many reject it for its very minimalistic pixel-art approach. The soldiers almost look like they are out of the Command & Conquer strategy games! However, I find those graphics very evocative, with my imagination filling the blanks; I was thrown in a futuristic but rusty meat grinder and spat out, then I angrily grabbed a shotgun and went to town. The graphic style fits perfectly with the agonizing screams from the enemies that fell and are bleeding out, or the gory intestines dangling from the walls.

However, nothing will change the fact that the enemies blend in with the background quite easily. That’s why there is an additional game mechanism to help visualize the threats. In a way that reminds of Metal Gear or Broforce, enemies that have seen the player and are ready to shoot have an exclamation mark on top of their head. This interesting idea allows the player to quickly see enemies despite their dark figures, and to be ready for a shot coming from that direction. You will never feel that you got shot by a random enemy, you always know what’s coming. Effectively, the game is stripped down of anything related to chance, and you have to brutally force your way through sheer skill. Jump, aim and kill! 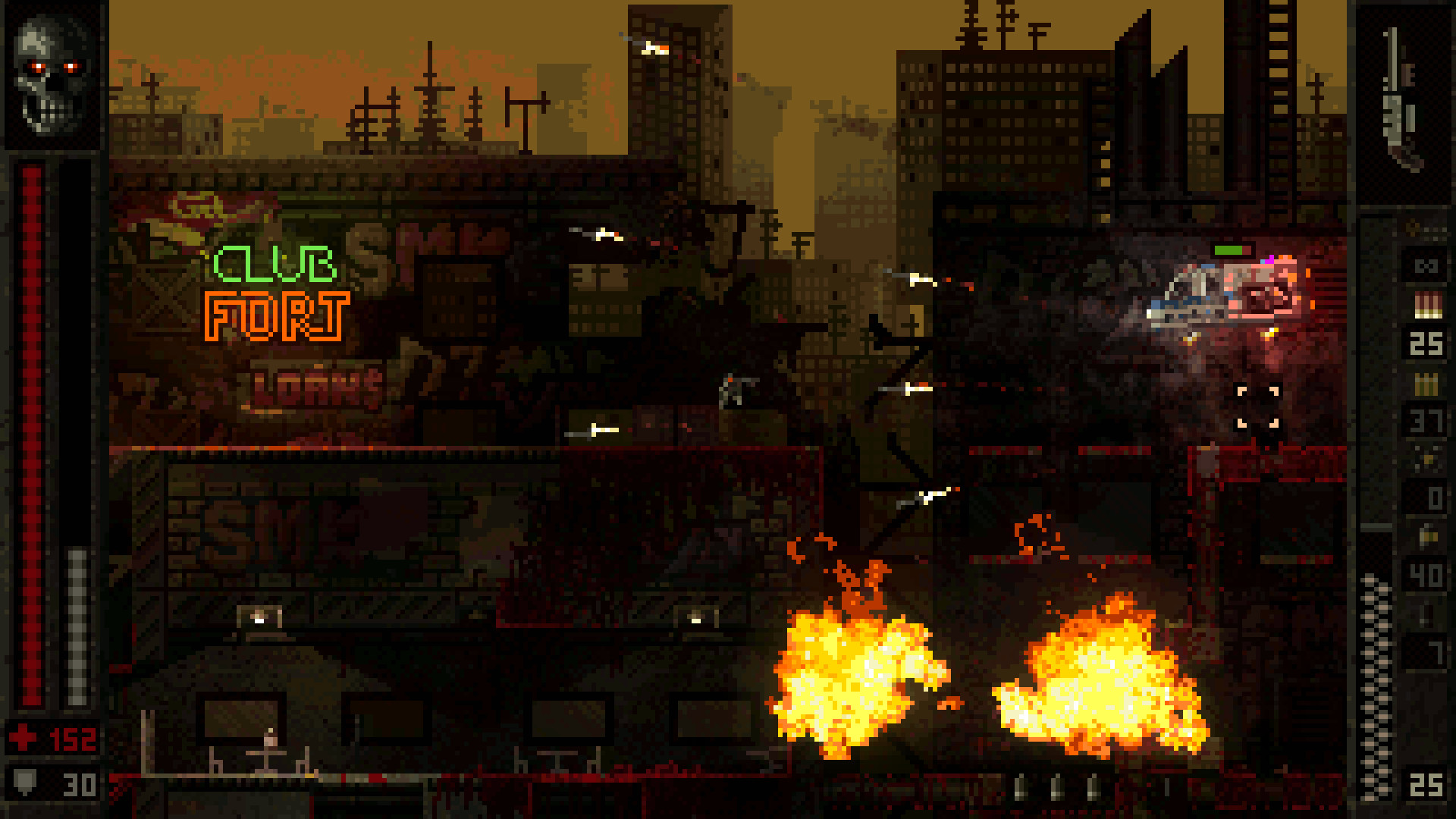 For the most part the game mechanics are very old-school. No double jump, no dash or anything of the like. Instead, BUTCHER makes use of an idea that was never used much since Metal Slug, and makes it essential to its design. Simple platforms can be shot through. Which means that you have a lot of freedom of movement in maps that can be very vertical, while not having your aim blocked by all the platforms. Conversely, there are thicker platforms and walls that cannot be penetrated by bullets, and those can be effectively used as cover. As a slight complaint, laser aim would have made it easier to instantly read if a shot will connect or not.

At first I thought that the game was brutally difficult, quite keen to put a deadly trap at the end of an already difficult level after a series of deadly arenas. But then I learned to use the weapons better while predicting the enemy shots, and never felt that the game was being unfair or too unbeatable. I have a lot of experience in these games though, and I thought that RIVE was fair while many also complained about its difficulty. So if you do not have lightning fast aiming and reflexes, you might want to reconsider getting BUTCHER. 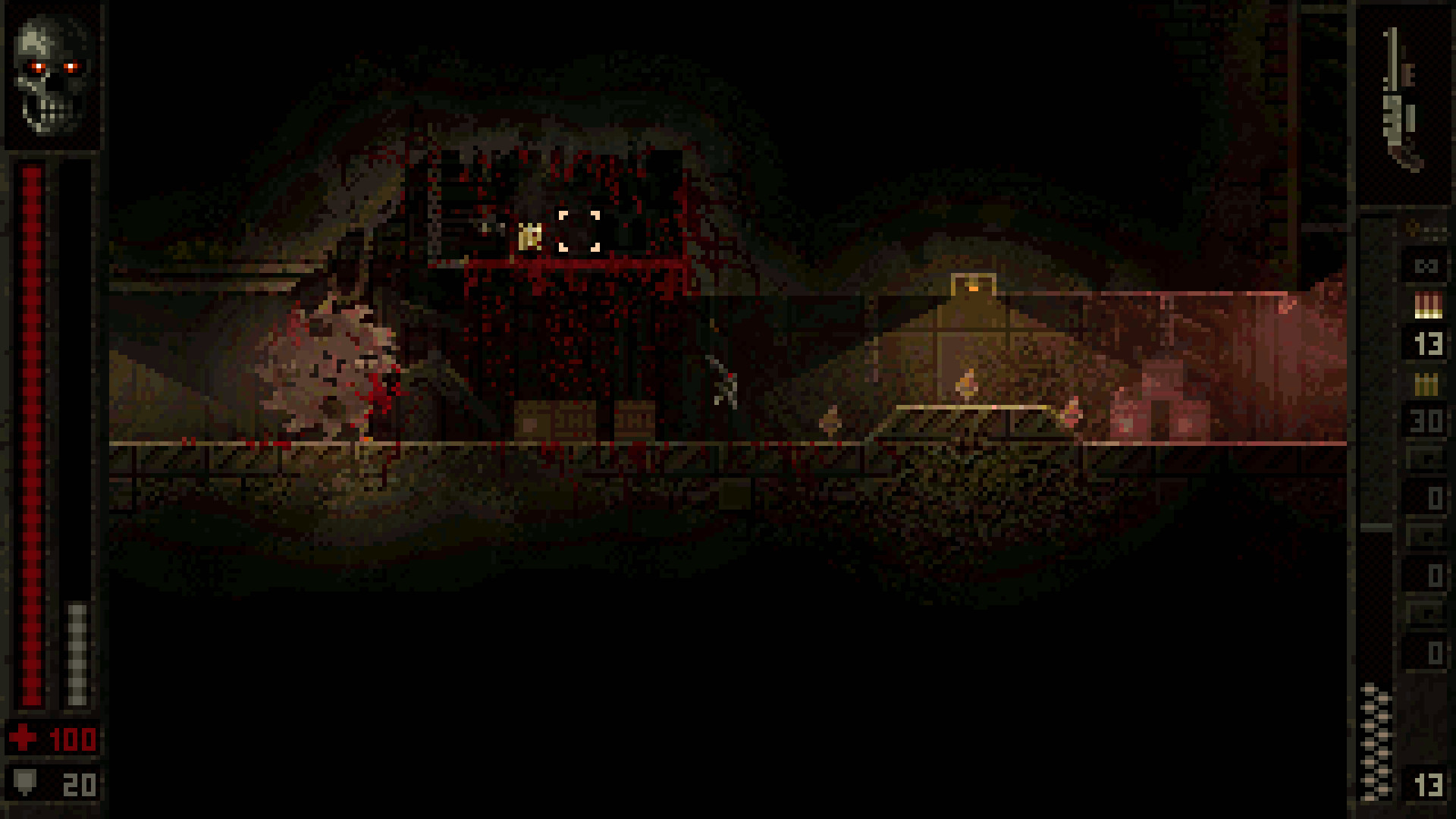 Length-wise, it took me about 4-6 hours to finish the game without finding all the secrets. This might seem a little bit short, however if it was a lot longer the game would risk feeling repetitive. The length felt just right for me. For those left wanting more, there are higher difficulties than Hard, and a Speedrun mode is coming. There is no story, no cutscenes, no loot, no upgrades or anything that gets in the way of shooting. You get in, you kill. Oh, and you might die too, but it’s up to you whether that happens often or not.

Want to see it in movement? Watch me in action right under there.

In conclusion, BUTCHER is old-school to the bone, with a few additional features that make the game very relevant and satisfying to play. A killer atmosphere and challenging gunfights make for a grisly offering to the gods of ultraviolence. Beware the difficulty though, unforgiving and yet not unfair.