I’d like some demons and organs, raw and bloody please.

All FPS games published by New Blood Interactive have an Overwhelmingly Positive rating on Steam as I write these lines, and Ultrakill is not an exception to this impressive list. However, unlike Amid Evil and Dusk which are more typically like the FPS from the 90s, Ultrakill attempts something different while retaining the same essence.

Ultrakill is a descent in the circles of Hell, named after the Seven deadly sins. In our world, they are not so deadly, as we are billions experiencing them daily; however, Ultrakill’s humanity is not so lucky as it is all but extinct, and a machine named V1 was sent down to take out the trash. As we control V1, we benefit from its abilities to dash, slide, and wall-jump: our robot is very nimble, able to quickly move around the cramped arenas presented to us. 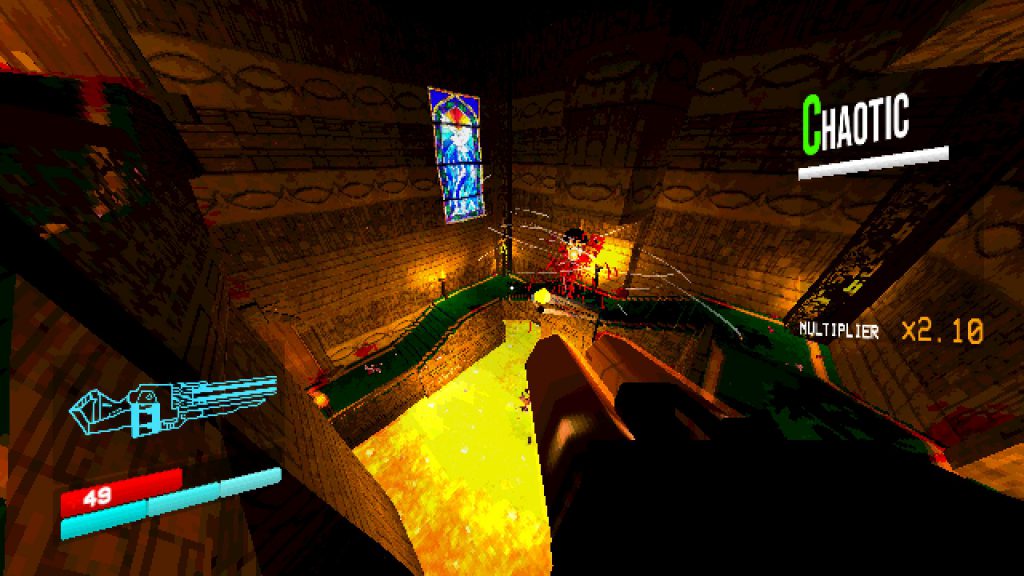 Ultrakill’s levels are rarely mazes, but instead a succession of arenas in which to fight enemies. I say rarely, as some levels require to explore a bit before finding the triggers to the doors, and some arenas in Lust can be a little more complicated. When I started the game, I was surprised to see so many levels that were just basic corridors, but I must admit that I almost regretted their simplicity when faced with some of the later levels that had a lot in common with Quake 3 multiplayer maps (including bumpers and deadly pits). The art-style is varied and good despite what little is displayed and despite the abstract layouts. 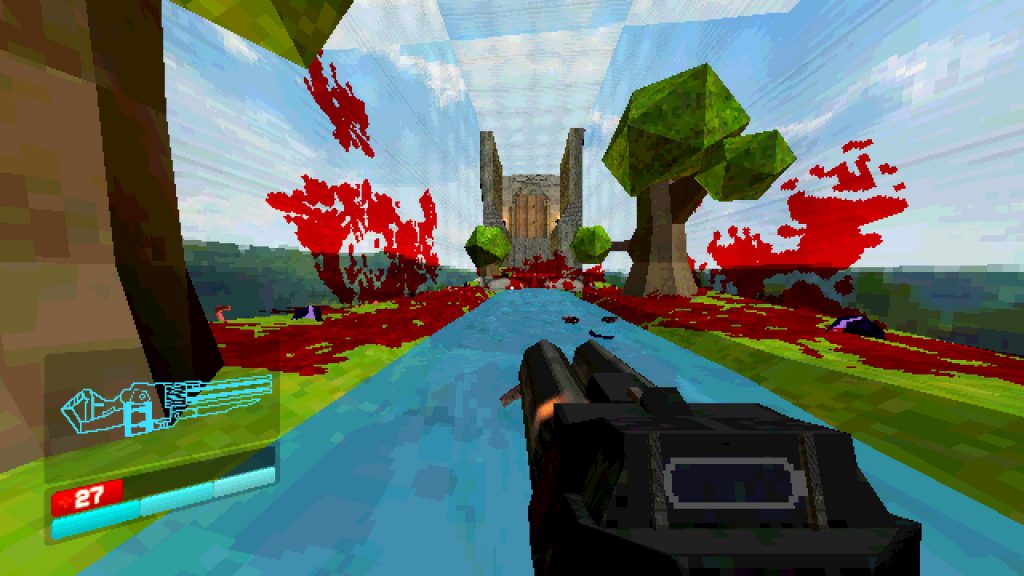 To survive the wave of enemies in these arenas, V1 can wield four weapons: a gun that can charge a piercing shot, a shotgun that can charge a grenade, a nail-gun whose bullets can home in on a beacon sent with the alt-fire, and a railgun. It takes a few levels to collect the arsenal, and everything after the pistol is super satisfying to use, giving great feedback to the player. All the weapons can then be upgraded to different alt-fires, such as a drill for the railgun, leaving quite a nasty mess behind. Looks like Turok 2’s cerebral bore is back in full force, as I saw something similar in Serious Sam 4. Thank goodness that FPS games are leaving the military shooter era behind, and are trying once more to give us exotic or sadistic weapons! To complete the picture, there is a melee attack that can parry or be upgraded to an exciting knuckle-shotgun with a pushback effect (remember that I mentioned deadly pits?). Bind all of this to your favorite keys, as you will need to quickly switch between weapons to dispatch the numerous and deadly threats that are after you. Indeed, each weapon will be a better fit according to the situation, and the most powerful abilities do require a tiny amount of time to recharge, and you cannot afford to stay idle. After all, you need to quench your blood lust. I love it when FPS games experiment with health systems that are not sitting behind a crate like in the military shooters. The new DOOM games incentivize forward momentum with Glory Kills, whereas Ultrakill simply requires to get sprayed by blood right from the source. How does a machine use blood to refill health? No idea, but it doesn’t matter as long as I have an excuse to shower in my victims’ blood. However, while this works very well against most enemy types, this can prove to be more troublesome during boss encounter with powerful melee attacks. The boss fights were, to me, the least fun part of the game, as the risk/reward of getting close for a healthy dose of blood was not as clear as before. The bestiary offers a satisfying variety of baddies: from ranged to melee, and from grounded to aerial, so there are often threats all over the arena requiring to perform a ballet of dancing between them while ripping them apart. Ultrakill can feel as nervous and exciting as a Quake 3 match! 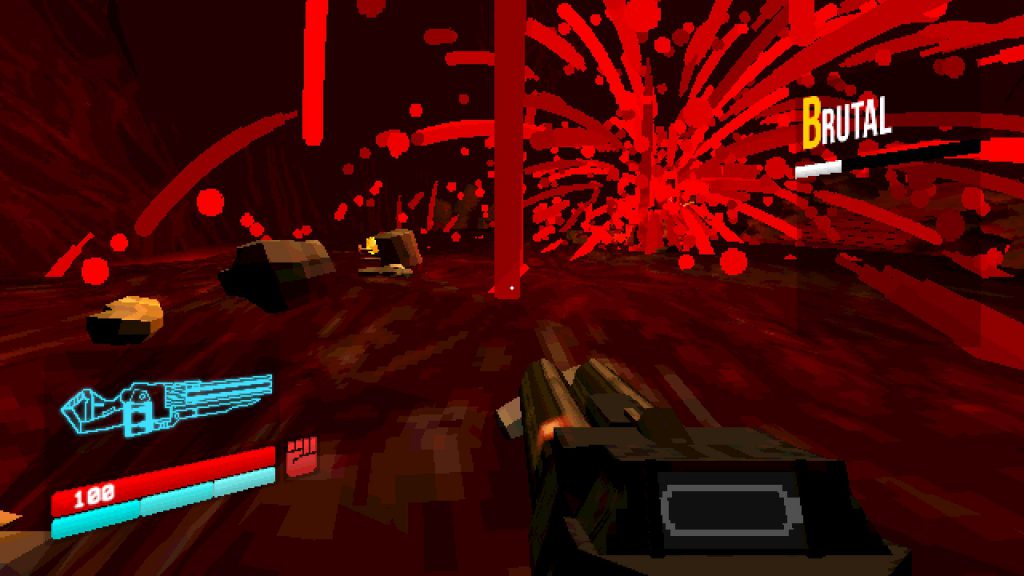 Another reason why you will be frenetically switching weapons to maximize your efficiency is that Ultrakill displays the score of your current combo, pushing you to ramp up the carnage and quickly find your next victim. This can be a bit frustrating during your first playthrough, as spending time looking for secrets will stop your combo (nonetheless, good scores are not required to pass levels). For speedrunners looking to score as high as possible in the leaderboards, this will largely increase the replayability of the game. For now, the Early Access has 2-4h of content for a first playthrough, and it seems like the full release will at least triple that number. Just keep in mind that the game is geared toward hardcore gamers, it is not designed for a gentle stroll through its bowels. 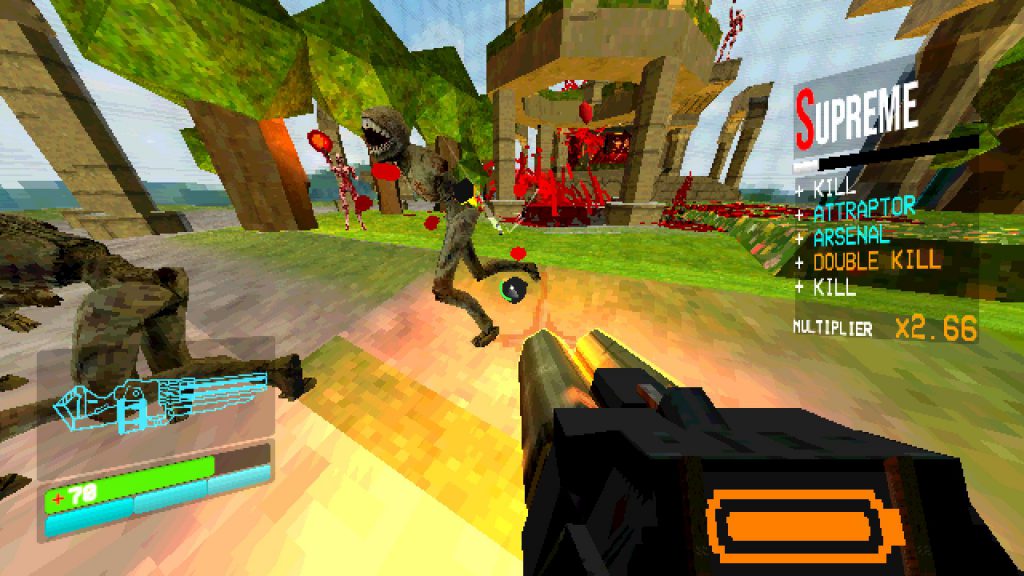 Personally, I prefer the pacing and feel of more traditional neo-retro games (such as Amid Evil, Dusk, or more recently Prodeus), but I can’t deny that I had fun during most of my time with Ultrakill. Still, the punishing difficulty was sometimes too high for me to enjoy myself, especially during some boss fights or occasionally in arenas with too little space to dodge without falling to my doom. 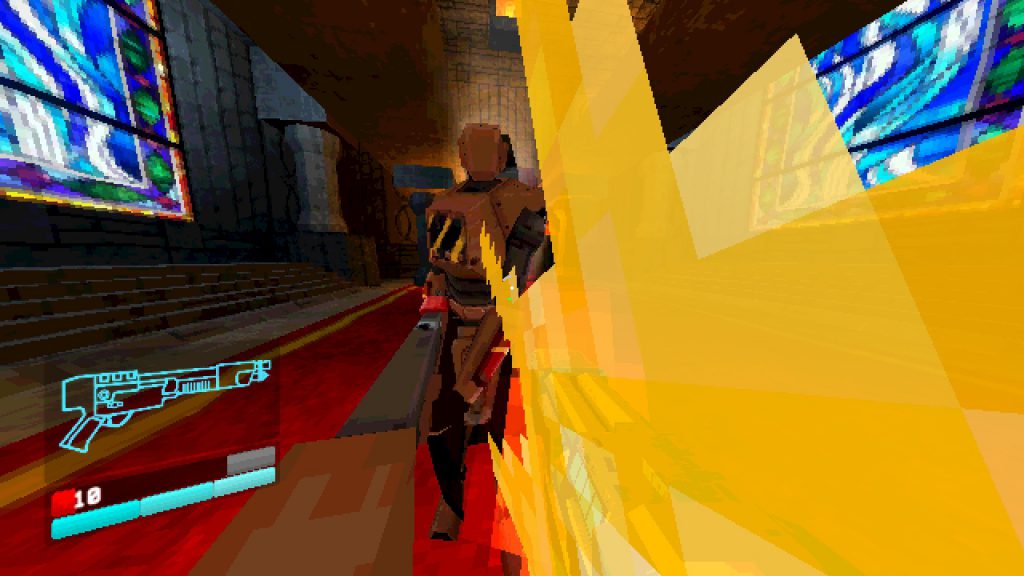 The art style brings back to the first Quake, and there are many options in the menu for you to pixelate or wrap textures to your liking. I increased the effects of what the game proposes at the start so that I could get immersed in the game as if I was in a vivid nightmare, and I loved it. No bugs or performance issues hindered my progress. On the surface, Ultrakill looks like other neo-retro shooters that are bringing us back to simpler times of shotguns and demons. However, this one is less of an adventure and more of a violent scoring challenge for hardcore gamers, with ultranervous gunfights requiring mastery of movements and weapons. If you are simply looking for an outing for your pent-up frustrations, beware, as this one might add to your burden. Only get in there with complete focus and be prepared to sweat.