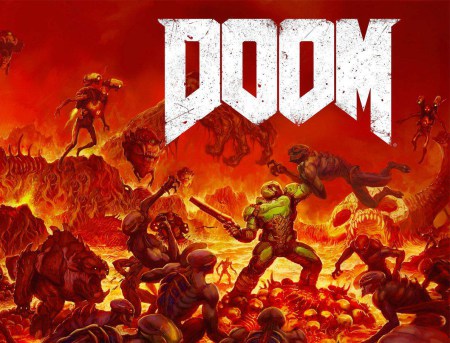 DOOM, released in 1993, is the defining First Person Shooter. A classic that shook the gaming world on its release, combining shameless ultra-violence with fast-paced immersive gameplay in crazy levels. However, the latest games from the development team id Software, DOOM 3 and RAGE, were quite far from the seminal experience of the original DOOM. It was also not a good sign when the new DOOM was criticized then rebooted because it was too close to a Call of Duty experience. Furthermore, the geniuses behind the original DOOM are long gone from the company. Bethesda’s marketing focused on the multi-player, and refusing to give Press copies before release was the last nail in the coffin to destroy all hope that DOOM 2016 would be any good. 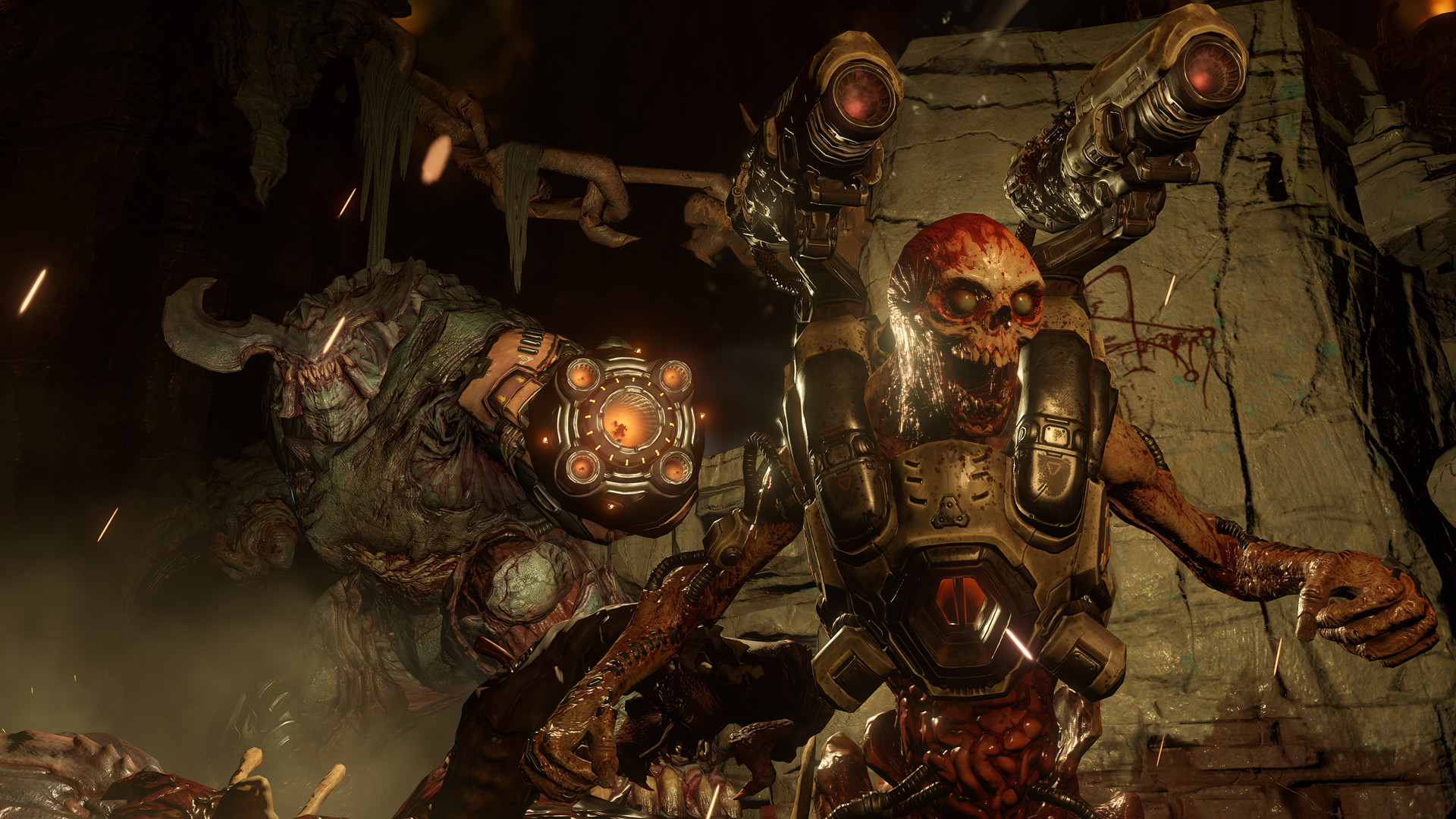 The FPS genre has always kept DOOM’s DNA. However, it has drifted quite far from the purity of DOOM. Cutscenes, scripts, linear levels have all stirred the genre towards a more cinematic experience rather than the sheer joy of exterminating hordes of enemies in great amounts of violence. Painkiller and Serious Sam could be said to be the closest spiritual successors to DOOM, and even these two games are getting old now. More recently, Shadow Warrior’s reboot has been a very satisfying shooter experience. Finally, a mod named Brutal DOOM reshaped the weapons of the original DOOM to have greater ballistics and feedback, as well as amping up the violence with localized damages, executions and plenty of gibs and blood spatters. Just by itself, this mod brought back DOOM to everyone’s mouths. We can be thankful, because it is very likely that it inspired the direction for the new DOOM 2016.

And what a game that DOOM 2016 is. A violent shooter with powerful weapons and hordes of demons to slaughter in joy and mayhem. Except that unlike Brutal DOOM, blood and corpses disappear quickly which decreases the impact of clearing a room full of demons. Each weapon can be modulated with several alternative fire modes, giving more tools for the player to face the threats. Except for the boring earliest weapons, they all feel great and they are quick to obliterate most opponents. A lot of dangerous enemies force the player to think fast, and adapt to the situation by dodging dangerous attacks and prioritizing targets to kill quickly with a heavy. 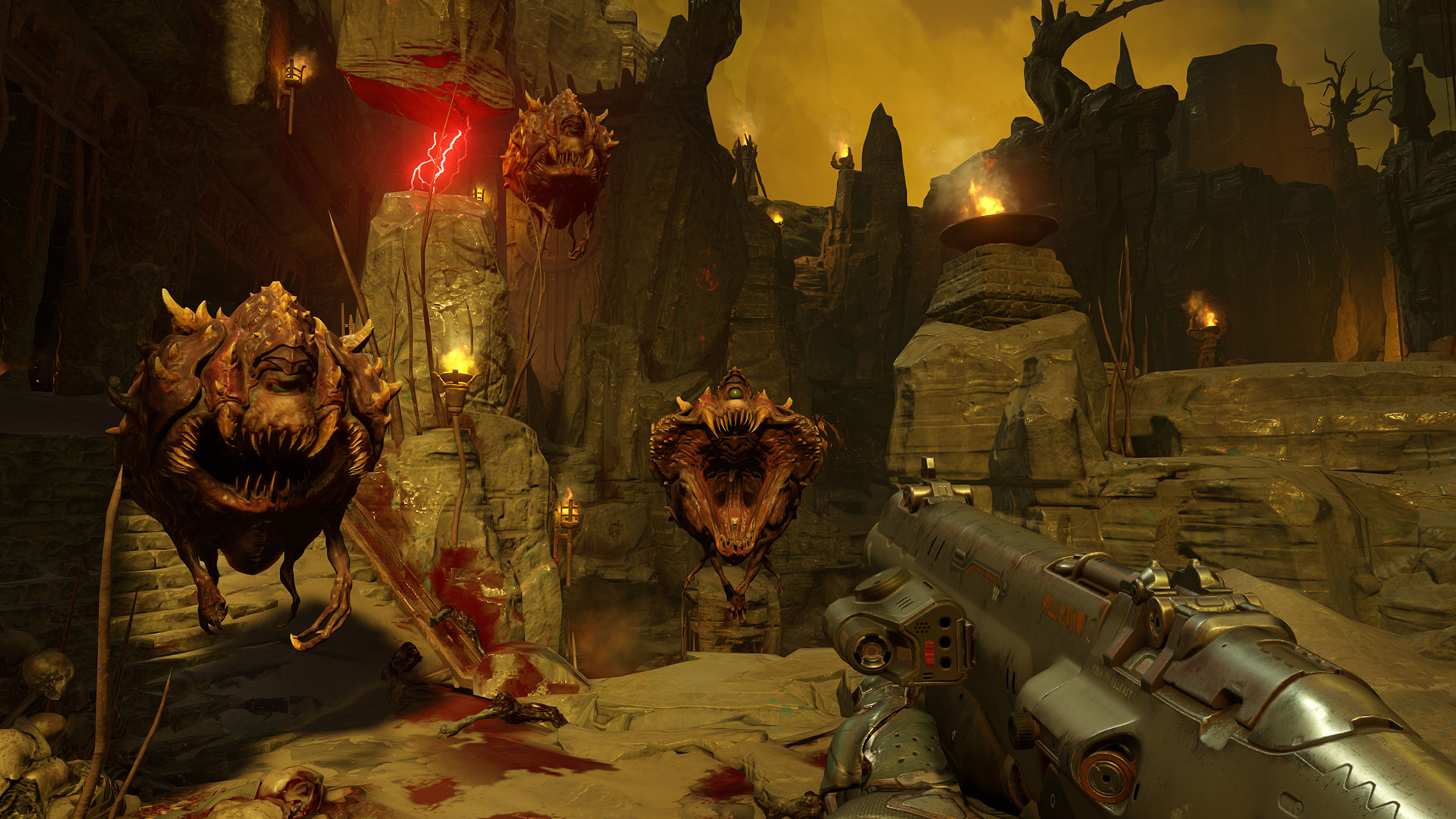 The movements are absolutely fantastic in DOOM 2016, as there is both a double jump and the ability to grab a ledge allowing for quick vertical movements around the arena, in levels that have been designed to let the player move around rather than hide behind a crate. Even the demons have a great move-set, jumping and climbing around. The AI of this game works really well. Another fantastic innovation is the Glory Kill system. While before release everyone was afraid that it would translate into pesky Quick-Time Events, in reality they are very short executions of low health monsters. And better than that, they are tied to the health system of the game as a Glory Kill rewards the player with extra health. This innovative system allows for forward momentum rather than backpedaling or hiding, and it is genius. I still have a problem with it, in the sense that the amount of health obtained is decided by the game relative to the health of the player, which creates a situation in which the player is always low-ish health then saved by Glory Kills, low-ish health then saved by Glory Kills. This loop is good as it creates extra tension, but the game will still give extra health for a non-Glory Kill if the player is low health and the system ends up feeling artificial, decided by the game rather than the player. I would have preferred a fixed amount of health so that the player has to keep more careful track of their health, but it is still brilliant the way it is. There is sheer pleasure in the fights, shooting the most threatening targets then jumping on a low health demon to rip it apart and refill your health before quickly escaping by grabbing a ledge. Without hesitation I can say that the battles in DOOM are among the best the genre has to offer, propelling DOOM 2016 to the position of one of the best shooters ever, sitting proudly alongside the original DOOM. 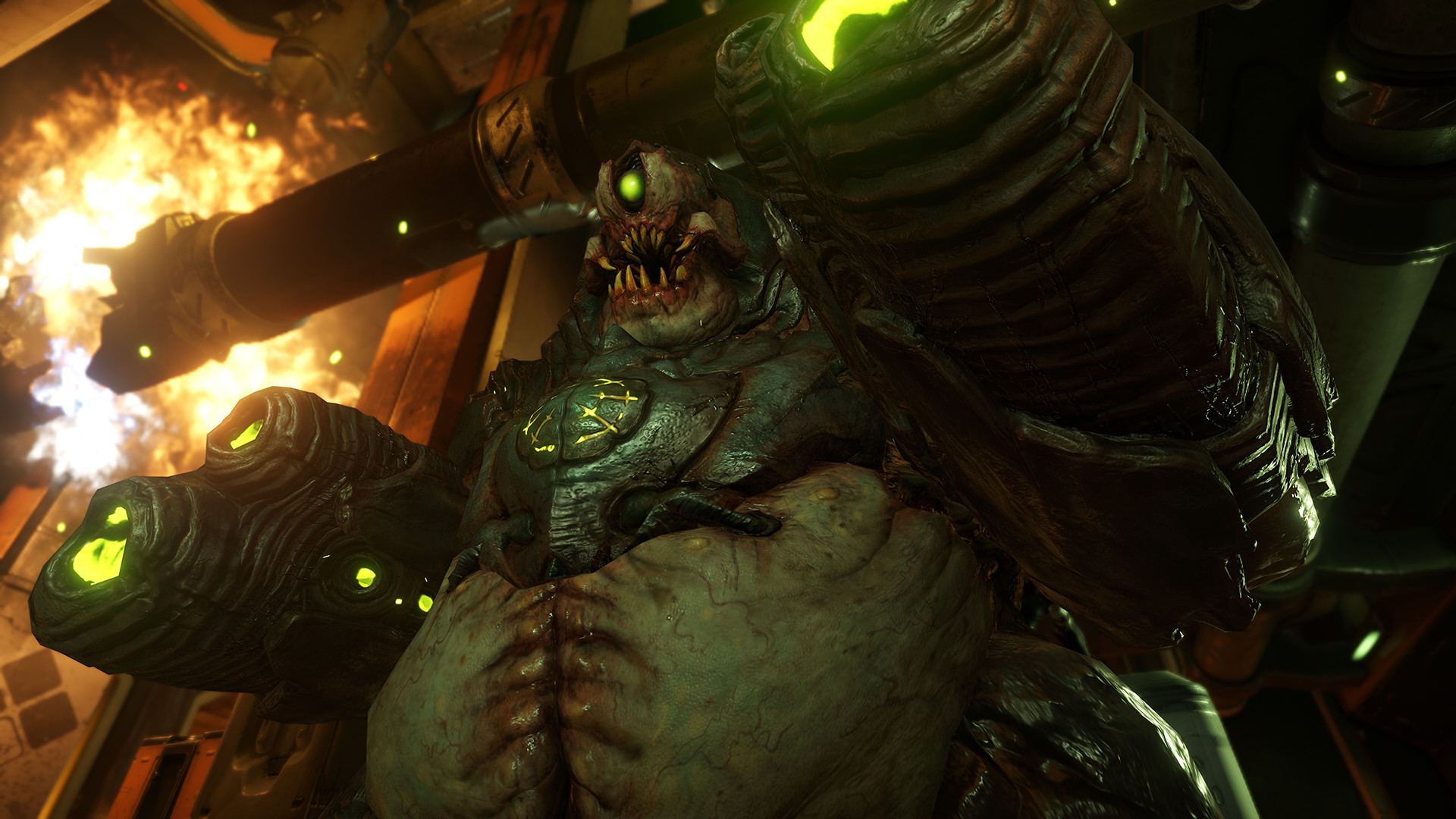 In this paragraph I will talk about health systems in other First Person Shooters. Health pickups used to be the way things worked towards the end of the 90s, creating extra tension when being low health but also hindering the rhythm by adding a need to backtrack to refill health. Then came the complete opposite with HALO and Call of Duty, regenerative health that allowed the player to always start new fights in a fresh state. While it works in Halo with its strong shield, in Call of Duty it forces the player to sit behind cover rather than run, all guns blazing, into the open. Perhaps it feels more “realistic” for war games, but it does not work well for games that aim to be fun with tons of enemies and large areas. F.E.A.R. gets an honorable mention for its portable health kits bound to a shortcut key, letting the player get loose in a gunfight while self-healing. Shadow Warrior gives total agency to the player with a self-healing spell that can be used anytime during a fight while running around, only preventing the player from shooting at the same time and forcing tense evasion maneuvers. Superb. Finally, the example closest to DOOM 2016 is NecroVision with its brutal melée combat that allows to vampirically get health back by performing combos and kills, thus providing an incentive to run amok in the middle of a group of enemies. As you can see, health systems are very important in a FPS as they decide whether the player backpedals, sits behind cover or moves forward. DOOM 2016 sports the best I have seen, with NecroVision and Shadow Warrior. 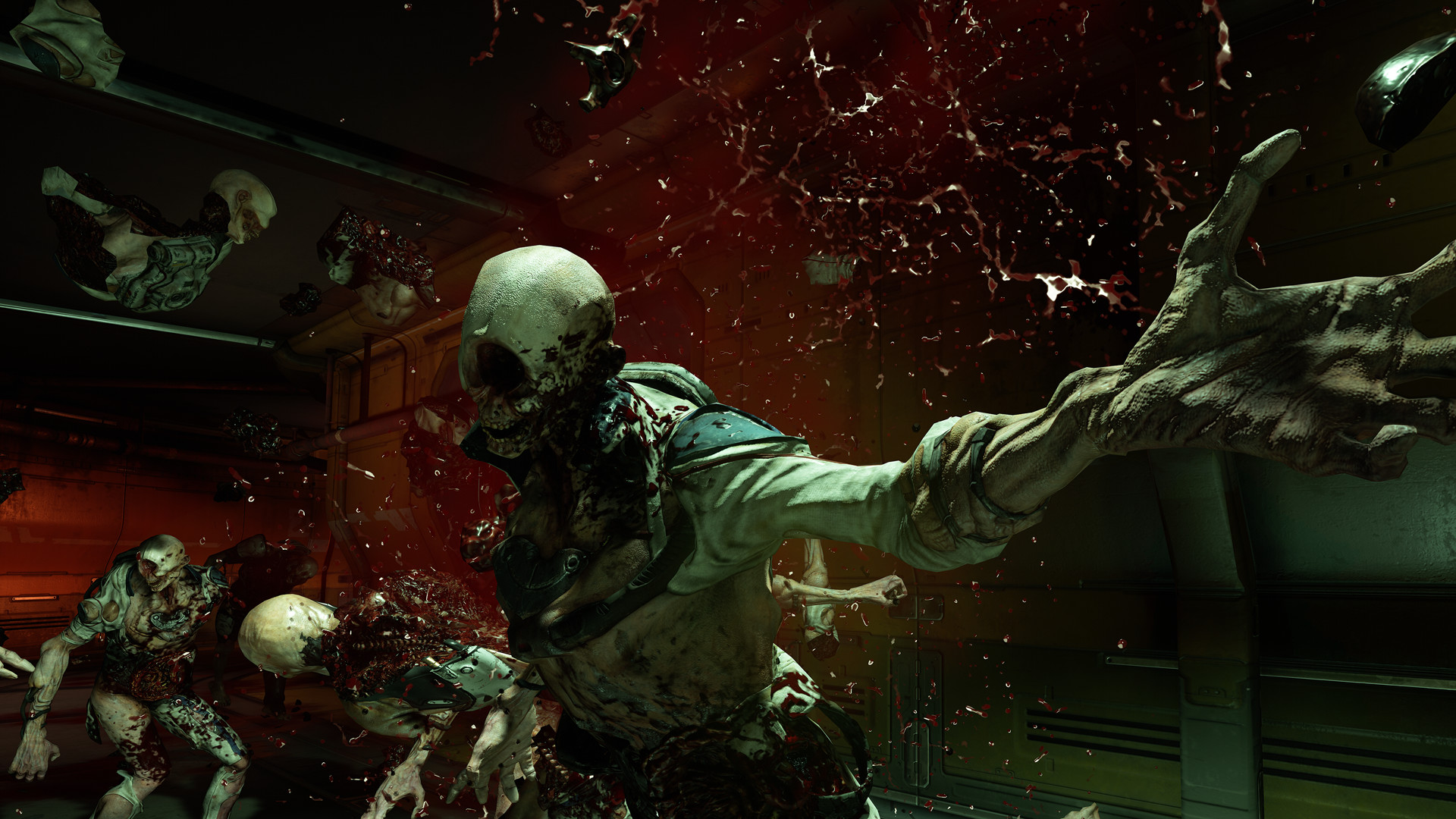 Another important component of a DOOM game is its level design and secrets. Overall, the levels in DOOM are very well done, neither too linear nor too open but with bigger interconnected areas that allow for an interesting treasure hunt, as the game is filled with secrets. And that will become my biggest complaint about this game, as the weapon modifications are to be found in the secret areas. Suddenly, exploring is not an option anymore but a necessity to take full advantage of the weapons, and it completely destroys an otherwise perfect pace. New Game+ becomes the best way to experience the game without having to bother about stopping here and there to look for secrets, but it is not even possible to increase difficulty on the fly to avoid having to find the secrets again when playing on a higher difficulty. Furthermore, manual saves are not possible so exploring for secrets around high cliffs can become a tedious chore. The necessity to find secrets is the biggest false note of an otherwise fantastic game. 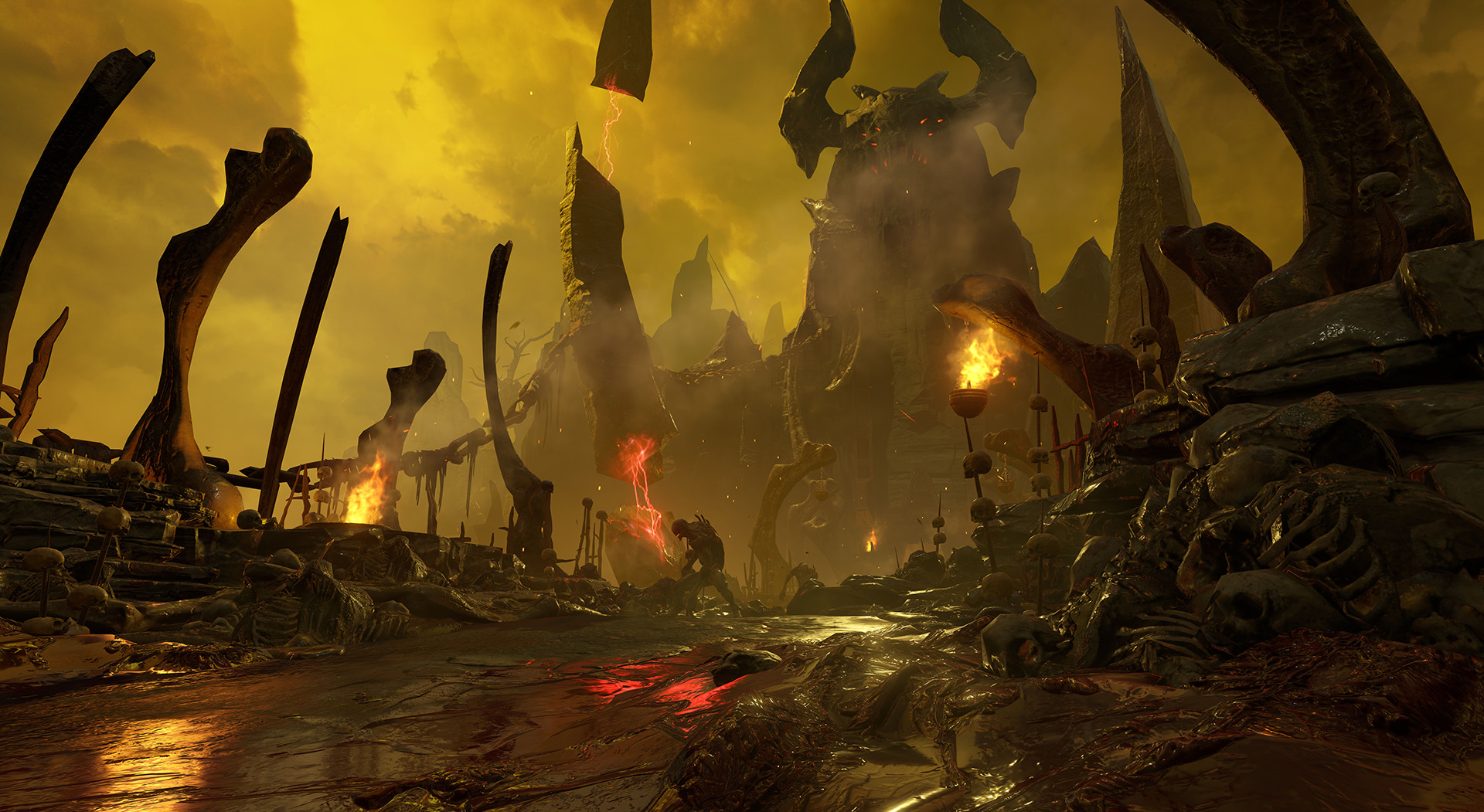 Talking about false notes, the music of this game is great and reflects very well what happens on screen. Out of fights, the music feels like latent aggression, and during fights it will pump your veins. Hell levels sometimes feature epic choirs that will send chills down your spine. Talking about the Hell levels, they are gorgeous and in stark contrast with some of the dull industrial levels on Mars. The story is very simple but also very satisfying, as the DOOM Marine (also called the DOOM Slayer) is like most players and does not care about exposition and story, he will express himself by punching things. There is a strong feeling of bad-ass empowerment, very fitting to DOOM. Finally, the engine runs very smoothly (very rare these days) and the campaign runs for 15-25h depending on your lust for 100% completion and finding all secrets.

Oh, and there is a multi-player mode. Mostly classic fast-paced deathmatch, with annoying perks like the horrendous wall-hack. While it is not bad, I did not have a meaningful time with it and cannot understand why Bethesda’s communication was focused on this part of the game, nor why there were multi-player DLCs rather than single-player ones, although there are pretty armors to collect and it can be cool to play as a demon. Snapmap is a good tool for players to make their own maps, but from what I have seen the final results are not on par with the single-player campaign and this tool cannot replace proper mods. Still better than nothing I guess, but clearly not a strong appeal for this game. 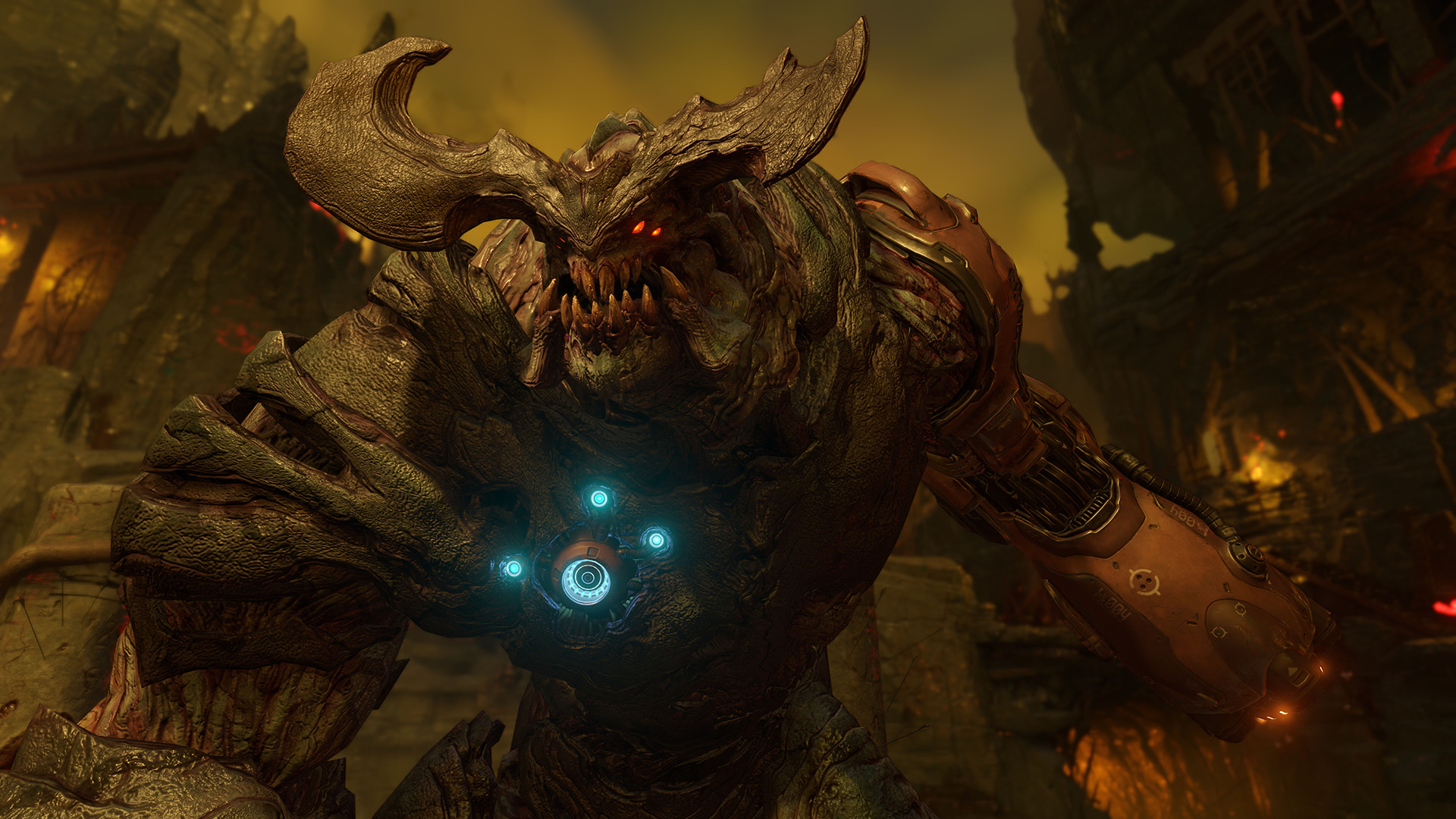 In conclusion, DOOM 2016 is a stellar shooter, clearly one of the best FPS ever made thanks to its brutal Glory Kill system that rewards forward momentum, coupled with joyful weapons, dynamic movements, fantastic monsters and well-designed arenas. The game is gorgeous and runs well, I only regret a tedious beginning with a boring pistol and annoying enemy soldiers before the equipment starts rolling in, equipment that breaks the rhythm of the game by being tied to the secrets. Finally, the game is glorious in its gore and violence, but the corpse and blood disappear too quickly. Still, a breakthrough game that is by far the best FPS of 2016 and it honors its ancestor the original DOOM.

Here is a video with my impressions of the game when it was released: