If you thought that the golden age of the revival of old-school first-person shooters was already over with Dusk, Amid Evil, and Ion Maiden, then hang on tight as a new wave is coming! And it looks like we can expect new quality titles as well, as Prodeus is another wonderful offering joining the aforementioned titles in the pantheon of worthy successors to the best FPS from the middle of the 90s. Briefly before we start, I will comment on the sudden trend of calling these neo retro FPS games “Boomer Shooters”. Three generations marked the second half of the XXth century: numerous babies born after the end of WWII (baby boomers), their children (gen X), and then those born in the 80s and 90s (millennials). At that time, the configuration was roughly as follows: Millennials played the FPS games developed by gen X while boomers complained that they were too violent and tried to ban them. Of course, this is porous, as many gen X parents complained about violence while other gen X played the games too, but the point that I am trying to make is that calling these games “Boomer Shooters” while implying that they are for baby-boomers (currently at the age of retirement) is disingenuous and false. You only get a pass if you mean “Boomer Shooter” as in “Things that go Boom”, as these games are indeed a lot more explosive than the narrative-driven and console-driven games that followed.

Playing Prodeus for the first time feels like familiar territory: in an alternate reality, this game could be named DOOM 3 without raising too many eyebrows. This is especially obvious when facing the equivalents to DOOM’s Shotgun Guy, Imp, Pink Demon, and Cacodemon. Visually, it even sports a resemblance to DOOM (2016)’s red levels like Forge. And then the weapons also share some similarities to id software’s classic weapons. Is this a bad thing to lean so close to DOOM? Absolutely not. There are reasons why DOOM’s formula worked so well then and now, and there is nothing wrong in taking strong inspiration from it. Especially considering that the more you play and encounter novelties, the more you realize that Prodeus is simply using a solid foundation to propose something new and yet familiar. And most importantly, efficient. 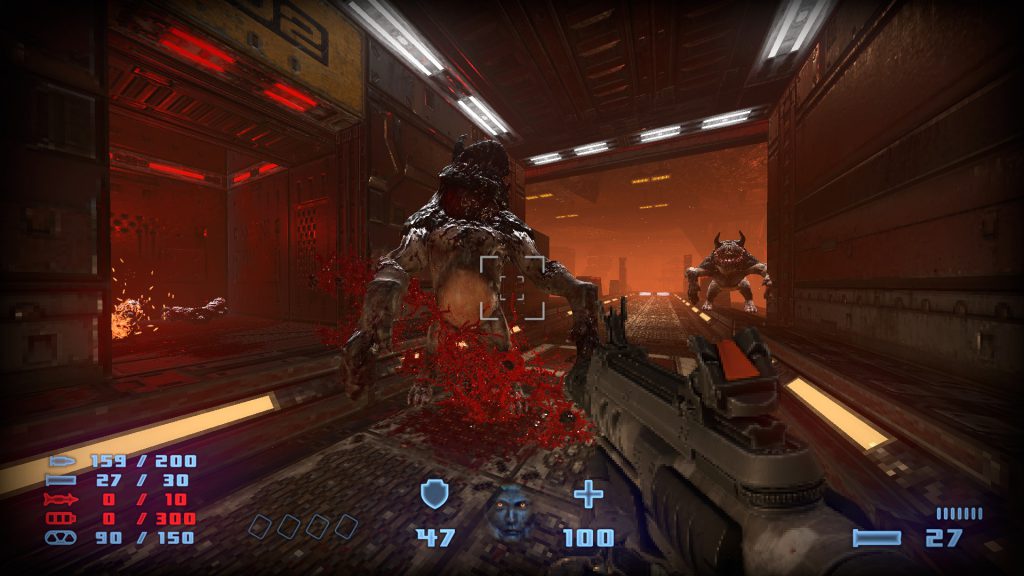 Prodeus’ weapons kick some serious ass, and unleashing hell on your enemies instantly feels amazing and exciting. This is the closest I’ve seen to the ultimate standard that is Brutal DOOM, and this is not a timid endorsement. From the sounds, the particle effects, the dismembering, the pools of blood that spray from enemies that were hit, and the sheer destructive power, it’s all there to make combat incredibly satisfying. Still, there is a need to use the right tool for the job, as the weapons have been carefully balanced (ammol pool, reloading, accuracy, power, etc) to each have a specific use. As long as you pick off enemies one by one, the base shotgun can also prove useful at a distance if you use the incendiary alt-fire that requires to charge a shot. And the plasma gun’s alt-fire is a remote beacon to make sure all plasma shots find their target, even at an angle. Or the grenade launcher’s alt-fire is a sticky grenade to give you enough time to get away before the blast. The equivalent to the lightning gun has an alt-fire that is basically a railgun. Another exciting alt-fire was the Quad Shotgun. This is like DOOM 2’s super shotgun, except that it can fire 4 rounds at once; whatever you were aiming at is now pulverized into chunks of meat. Tasty. The Early Access sports 9 weapons with 8 more to come, but there is one thing that I sincerely missed: a kick or another quick-melee attack button. In any case, the gunfights are sublime, and since the game is not stingy with enemies (waiting for you or teleporting in), you can quickly find yourself pumped with adrenaline, in a mix of frenzy and pleasure. Yeah, this is what I expected from DOOM Eternal, so I am now glad to find it in Prodeus instead. 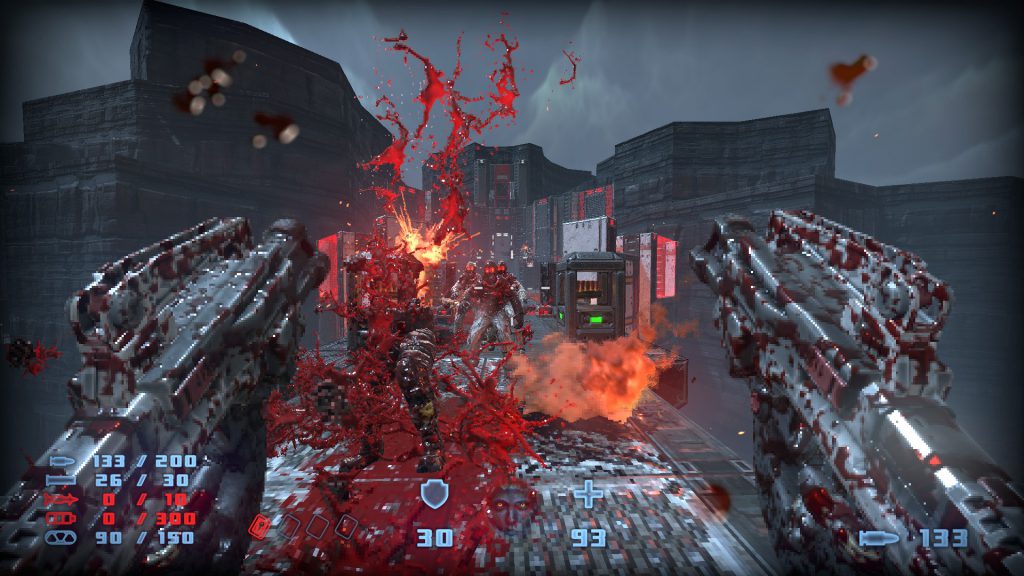 To reinforce your bloodthirsty immersion, the game’s foreboding atmosphere is dark and red. You are inside a nightmare, and your name is ultraviolence. To strike the point further home, composer Andrew Hulshult signs another masterful soundtrack of industrial metal, brimming with latent violence until it blasts its impactful energy into your willing body. Just watch the video accompanying this article, and tell me that you don’t want to play this game. However, while the art direction works wonders with the moment-to-moment fun in combat, it doesn’t really hold up as a whole. This is especially true for the levels, mostly simple corridors of metal with red lights, and it quickly becomes difficult to make the difference between the insides of one generic sci-fi base and the next. Even the original DOOM had more striking visuals and unique sights, making it easier to remember locations that you had visited. Although Prodeus still eventually succeeds to leave a visual mark with the layout of its exterior locations, I fear that overall, the game lacks a visual identity to make its levels, as well as itself, stand out. 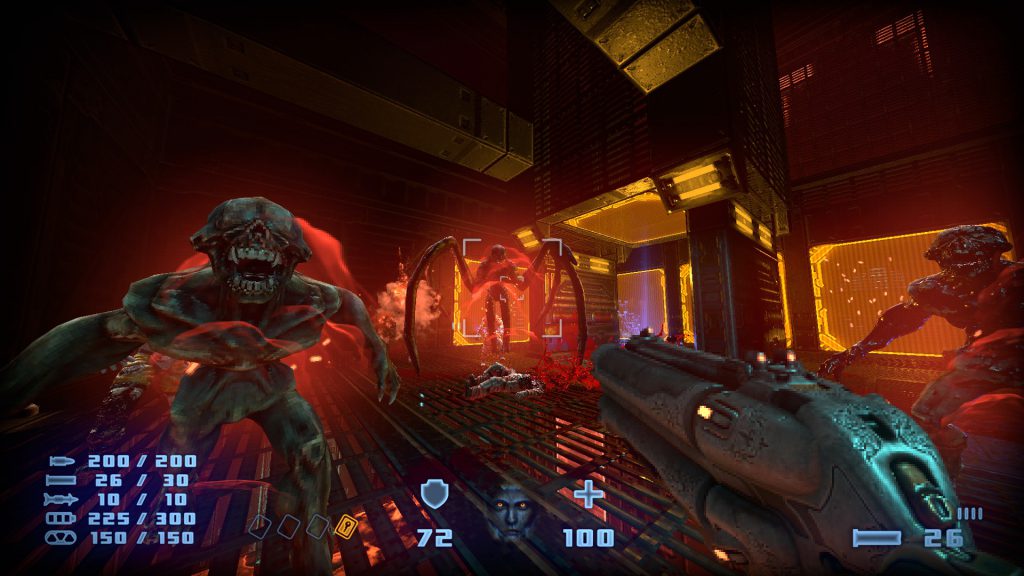 Thankfully, the level design does not suffer too much from the lack of a strong visual identity, as the levels are masterfully designed to guide the player down a certain path even though many levels loop around themselves. Prodeus strikes a nice balance between a linear progression and levels that gradually open themselves and loop back around themselves, without either losing the player in a maze or lacking any freedom to explore. There are lots of small tricks to make progress as smooth as possible, such as the placement of windows to see ahead or doors to create shortcuts back to old areas becoming new again. Some levels ask you to cross several times the same place from different heights or sides or progress through a level centered around inaccessible enemies that harass you until you get the satisfaction of finally reaching their hideout and unloading your frustration directly into their ugly face. Sweet release. There are no quick saves and quick loads: instead, there are respawn points to activate and reappear there upon death (dead enemies stay dead). This manages to strike a balance between feeling the pressure to perform well, without being slowed down by death or quick saves. The length of the levels is also perfect, not too long like I’ve often seen in recent neo retro FPS games. 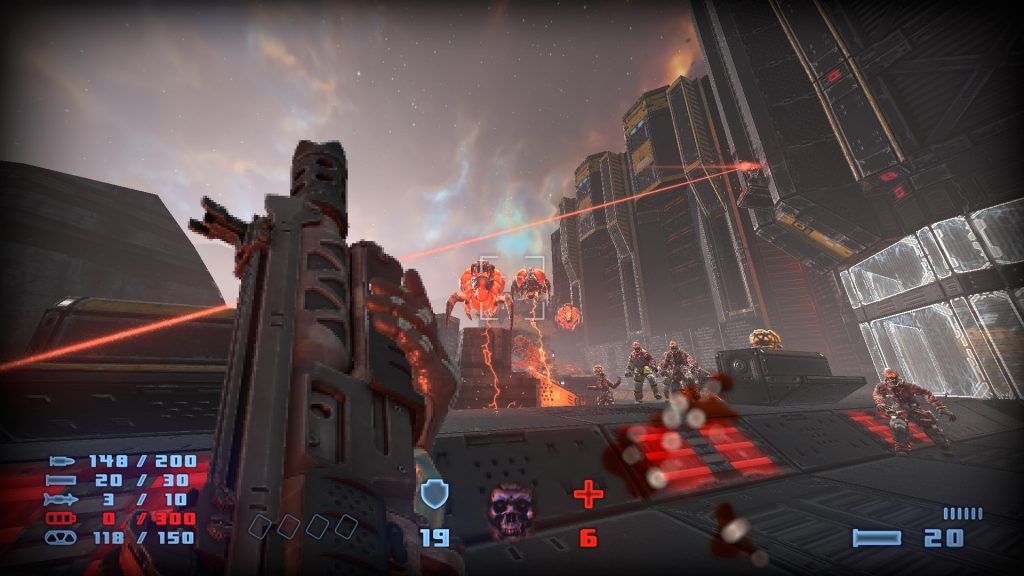 If the levels’ short length, tight level design, and intense combat invite us to dive in once more, this is facilitated by how the levels are presented: rather than a block of levels forming an episode, there is an overview map (like many Super Mario games) letting you pick any level at will, check out your score in the leaderboard and instantly go back to killing monsters. I had fun for approximately five hours in the Early Access, which seems to be about 40% of the final product. And that’s not all, as the game is already equipped with a level editor, and you can quickly find and play other people’s levels and campaigns. Of course, many DOOM maps have already been ported to Prodeus, which works especially well as there are similarities in the roster of baddies. However, don’t expect 1-to-1 ports, as Prodeus quickly expands its bestiary to newcomers, such as snipers that take aim with a laser sight before firing railguns or small scarabs that bombard you while leaving pools of poison behind. 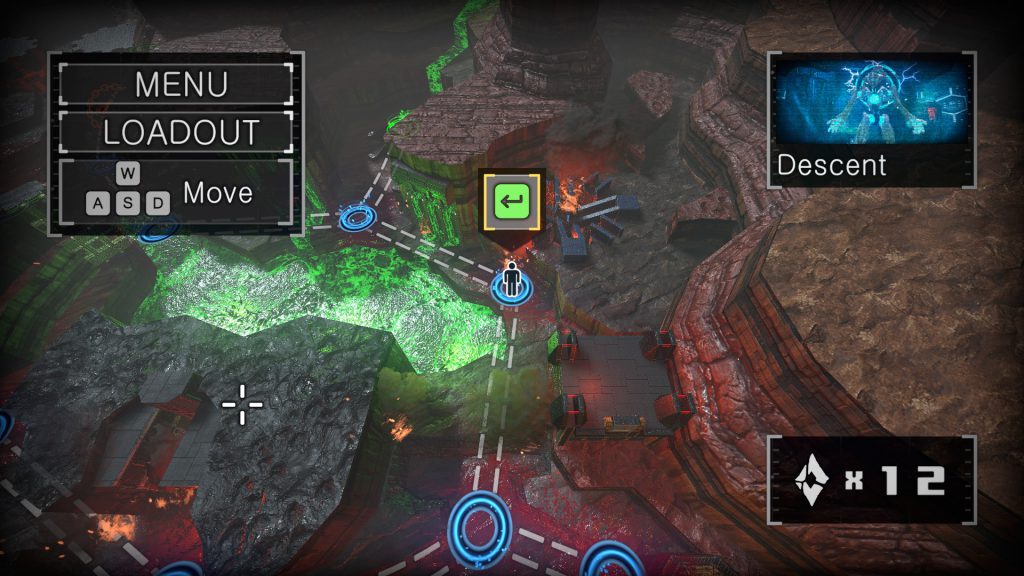 To Sprite or Not to Sprite

The options menu has everything that FPS players could ask for, such as rebindable keys, a FOV slider, the possibility to invert the mouse, and so on. I was happy to find settings to modify the HUD, and I removed the Space Marine’s helmet that was blocking off the sides. Also, there is the possibility to switch between 3D models and sprites for enemies. In truth, the monsters are not sprites, but a 2D render that ignores some frames. Although I absolutely love sprites, here this didn’t work for me, so I was happy with the 3D models with their smooth animations despite their pixelated faces. My only gripe was that I didn’t find a way to let corpses remain for longer, but at least the blood does stay. And there’s quickly a LOT of blood painting the levels red, your lust will be filled. 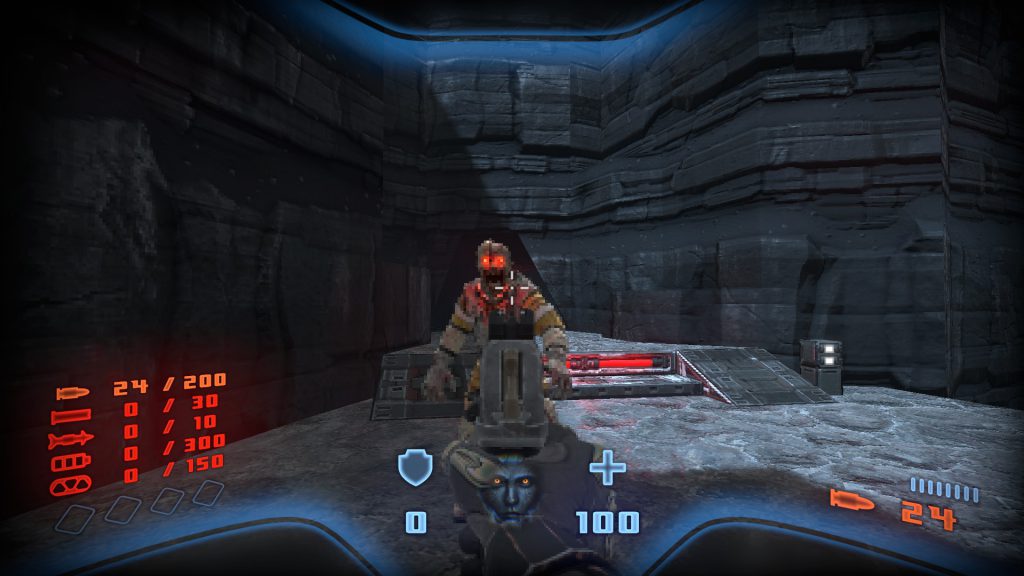 Prodeus is still in Early Access, and yet it directly shoots to my top picks in the neo retro FPS genre. Just like how Dusk was like a direct follow-up to Quake, if you are a DOOM lover then you can’t miss Prodeus. The moment-to-moment action is incredibly satisfying, the level design is tight, and the immersion in this world of ultraviolence will make you see red. My only and biggest gripe is a lack of visual identity, especially inside the structures.