The revival of old-school FPS games continues with Amid Evil, by the same publisher as Dusk.

Amid Evil shows off three of its chapters in the early access build. Many people compare the game to Heretic and Hexen, but as I played both recently I don’t see much in common. The aforementioned games were much slower and more tactical in their combats, while Amid Evil is closer to the visceral fights of id software games – and Quake seems like a closer inspiration, as they share a similar medieval-lovecraftian mood, and common guns. Oh yeah, those swords and maces might have been designed for melee combat, but in the end they are like big fluorescent guns.

Amid Evil takes place in a cosmic and fantasy universe, in which the player slaughters all kinds of monsters in levels with a complex architecture. While the setting sounds like an RPG, this is clearly an FPS. As per a general rule, games with mana-based weapons don’t have the same satisfying feedback as usual guns, but here the developers Indefatigable succeeded. There is the equivalent to the BFG, an electric arc, but most importantly there is a Morgenstern shotgun that is absolutely orgasmic. Oh, and a planet-thrower that grabs planets from their orbit and throws them as if it was a rocket launcher. If you throw Planet Earth, you get an achievement. These overkill weapons are necessary to mow down the hordes of enemies, they are fast and violent. I also noticed that the AI is less dumb than usual, enemies get around obstacles or jump rather that remain stuck. 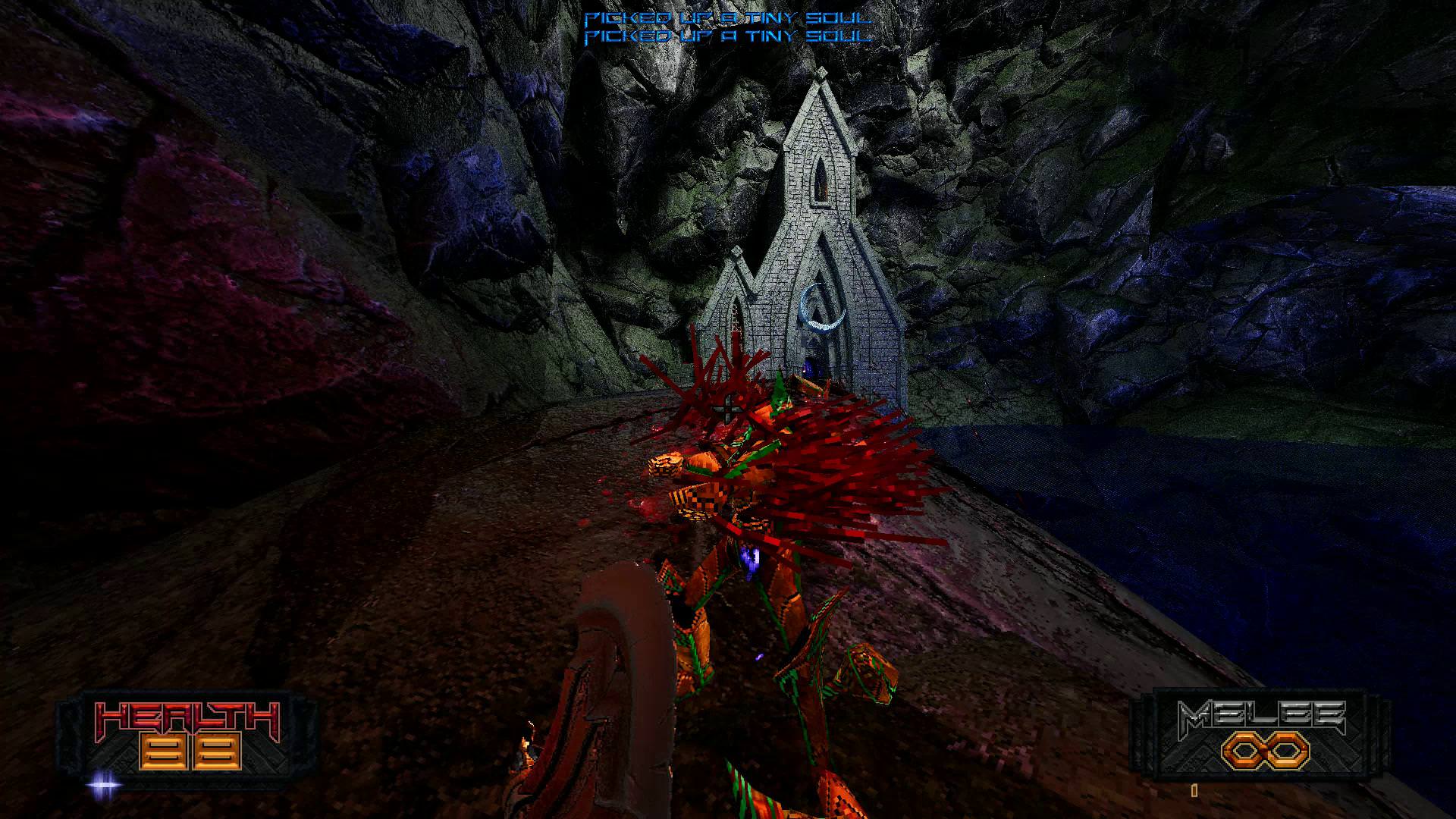 The colourful art direction is an acquired taste. It looks ugly on screenshots and it’s an unwatchable pixelated soup on video. However, believe me that mouse in hand and with the depth perspective it looks much better. Still, some enemies can be quite ugly. The font in the menus is unreadable, I gave up trying to decipher the background in the codex. And don’t forget that you can reduce the size of HUD messages, and remove camera shaking effects when you move. 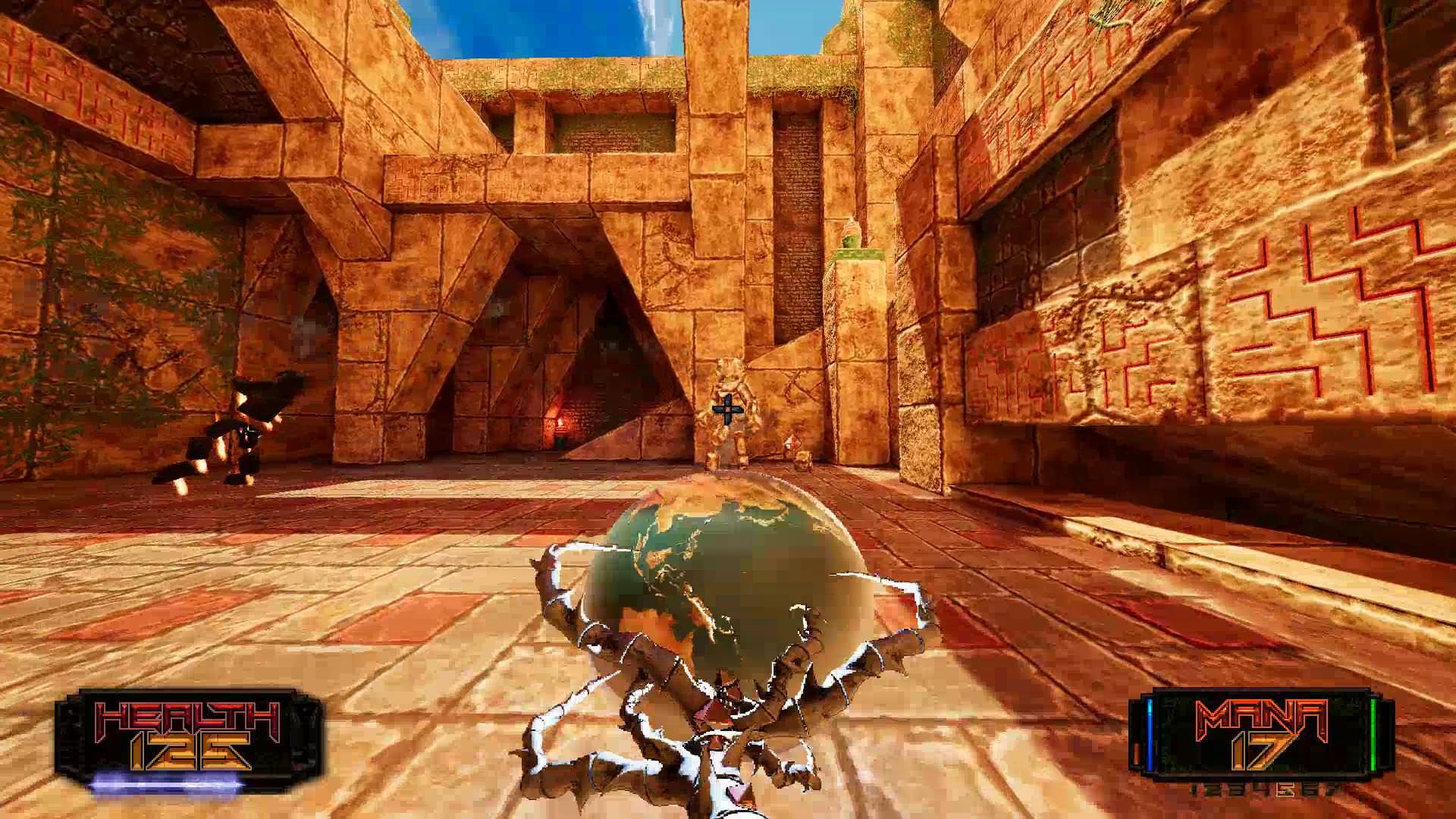 The graphical style is quite interesting, there is some sort of effect that makes the textures muddy, which brings back visions of the 90s when imagination was able to fill the gaps. I prefer this to smooth and clean graphics if they are also too basic to be evocative. There are gorgeous cathedrals and improbable architectures, but the problem is that as the game progresses levels and enemies become uglier. The third chapter is a catastrophe, both in terms of visuals and the feel of the combat. Each chapter features different atmospheres and enemies, which is great. However, creatures from the third chapter are shadows and golems, shooting them gives no pleasing feedback. Another problem with the levels is that they try not to be linear, but often the transitions are confusing and I it took me a long time to find out where to go.  Your progress is not very smooth, especially when a jump is necessary since those do not go very high, it can be frustrating… 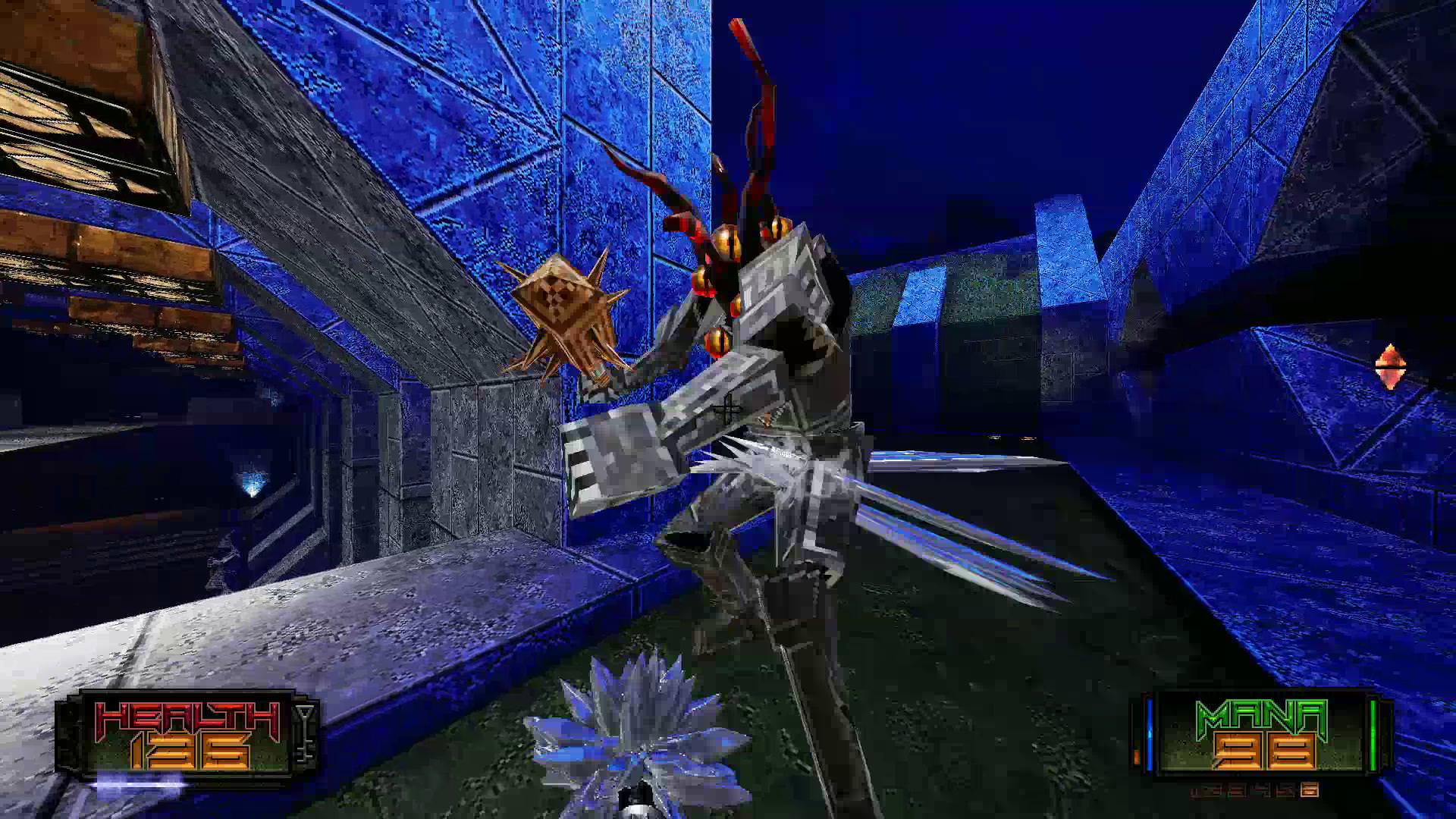 Another big issue is that once I got used to the weapons, I constantly wanted to murder some more but the enemies were too spread apart. There are many empty rooms that would benefit if they were a bit more populated, or even waves like in Serious Sam or Painkiller. And I was often wasting the berserker mode against useless enemies alone in a corridor because this power gets triggered by shooting any weapon. Not very practical. Thankfully, there is a horde mode to vent out. 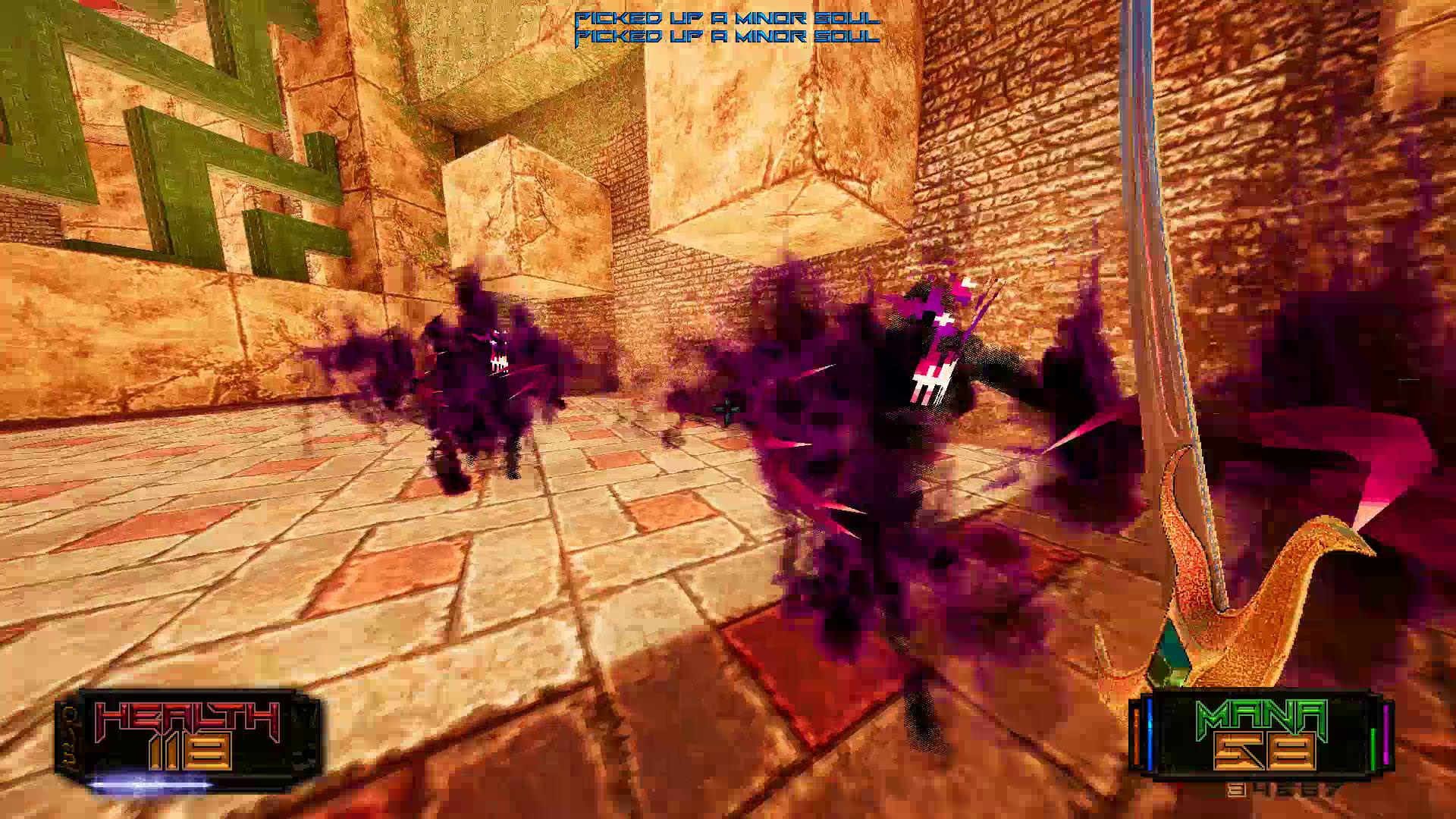 As an aside, I wanted to mention the nostalgia factor. Right now, there is a big revival of old-school FPS games, but aping games from the nineties is not sufficient to make a good game as I have seen with Ion Maiden. I am glad that Amid Evil turns out to be its own thing rather than a soulless copy. 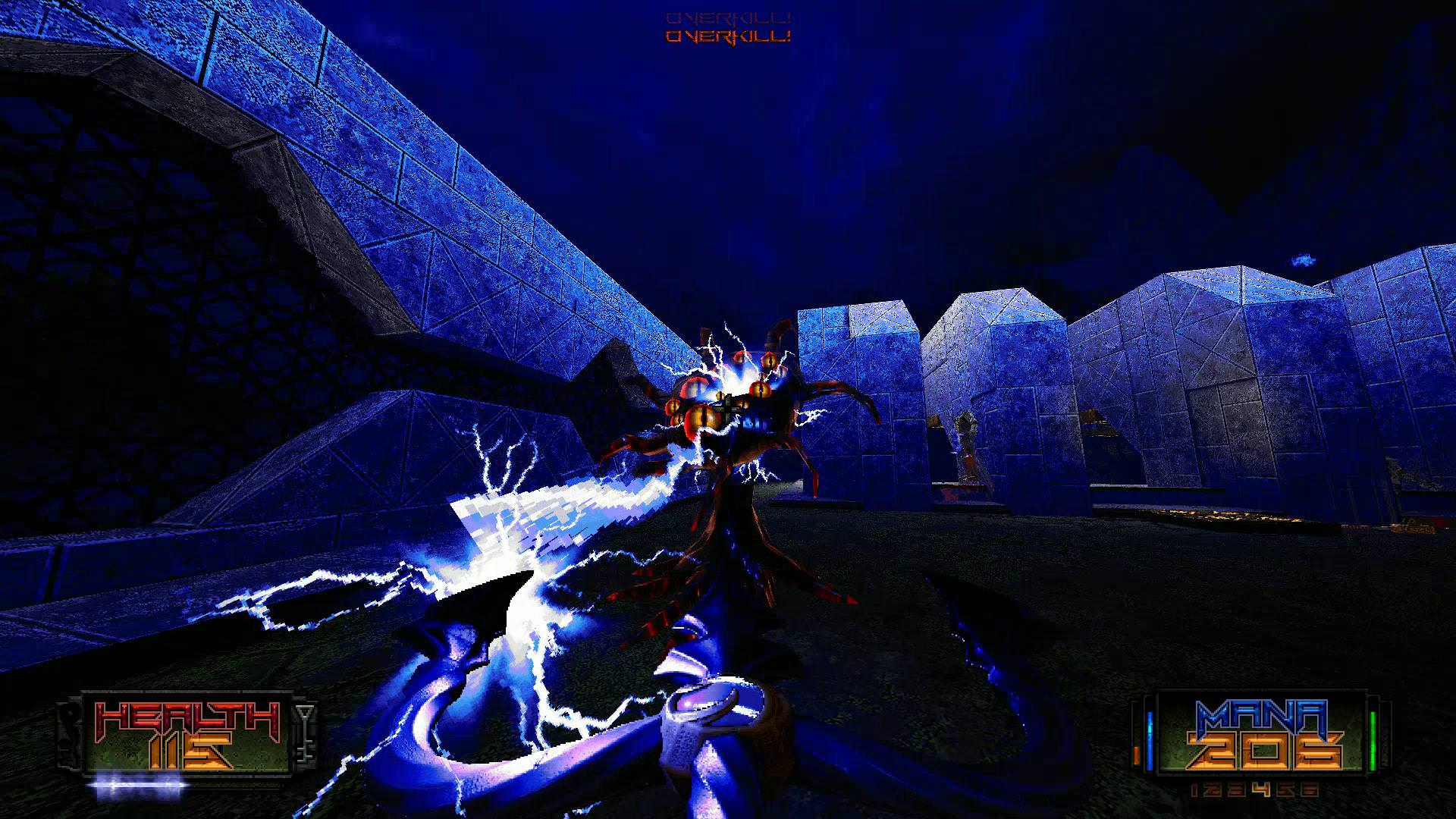 At first, I thought that this would be an ugly and boring game, but actually Amid Evil managed to charm me at places, and it satisfied my violent tendencies. However, it is too uneven to be really good, there are whole parts that would require a lot more work. Up to you to see if this fast shooter is right up your alley, but if you are too picky and demanding, you might not like it. Let’s wait and see if the early access helps to polish this very promising gem into an indispensable fast-paced shooter.