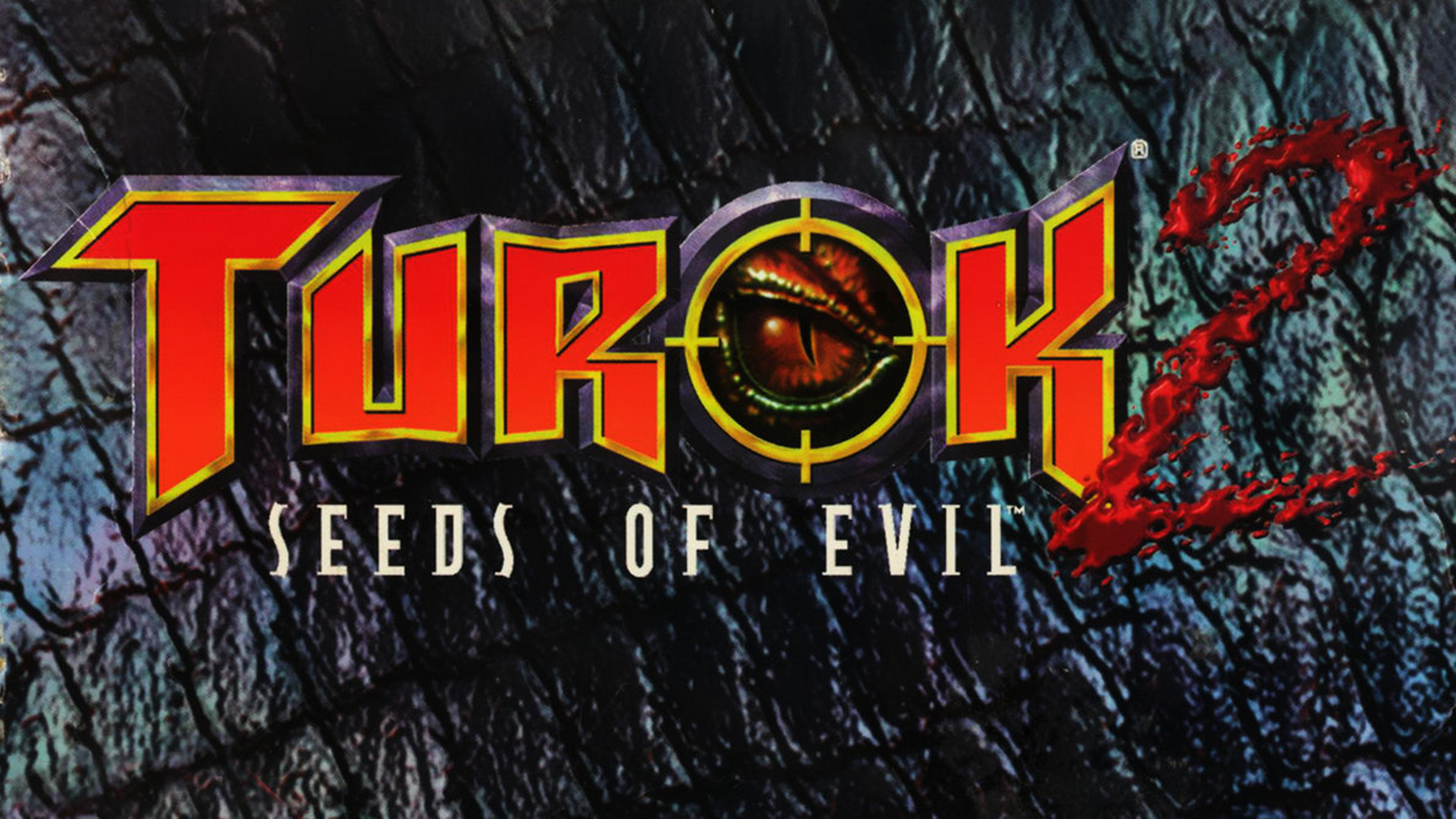 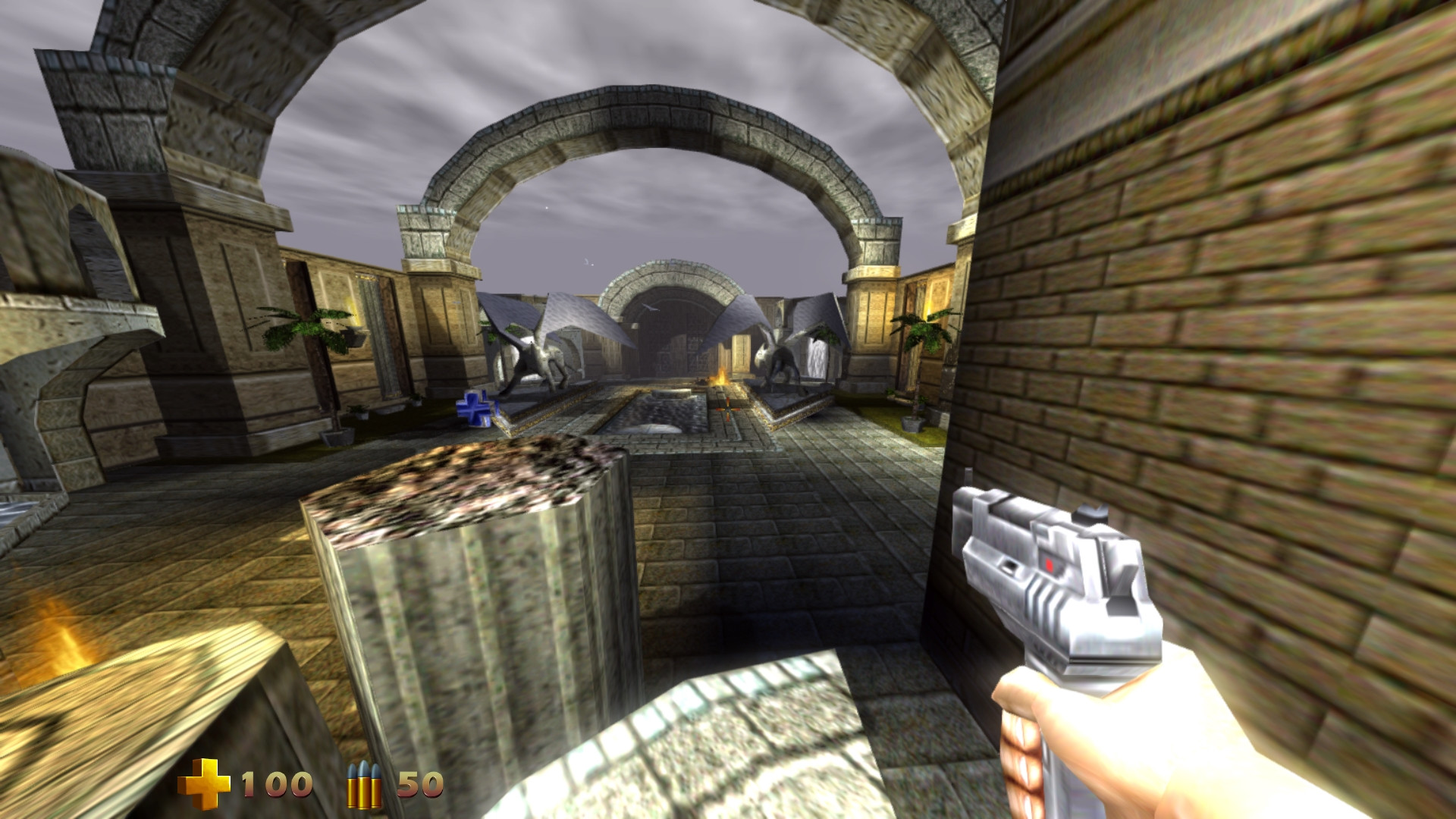 Back in the days of the Nintendo 64, I must admit that I paid very little attention to the FPS games on console. We already had Doom, Duke Nukem 3D and Quake on PC, so even though I was an avid player of the Nintendo 64 I can’t say that I liked playing a FPS with a gamepad. I still tried Goldeneye and Turok, they sounded more grounded than the abstract PC games and it’s true that the first steps in each of those games will remain in my memories. I never persevered, and gave Turok a new chance when it was remastered by Kaiser and Nightdive Studios in 2015. Despite the good controls I can’t say that I enjoyed it, the respawning enemies quickly became an annoyance and besides the cool jungle atmosphere with dinosaurs I was not particularly enjoying it. 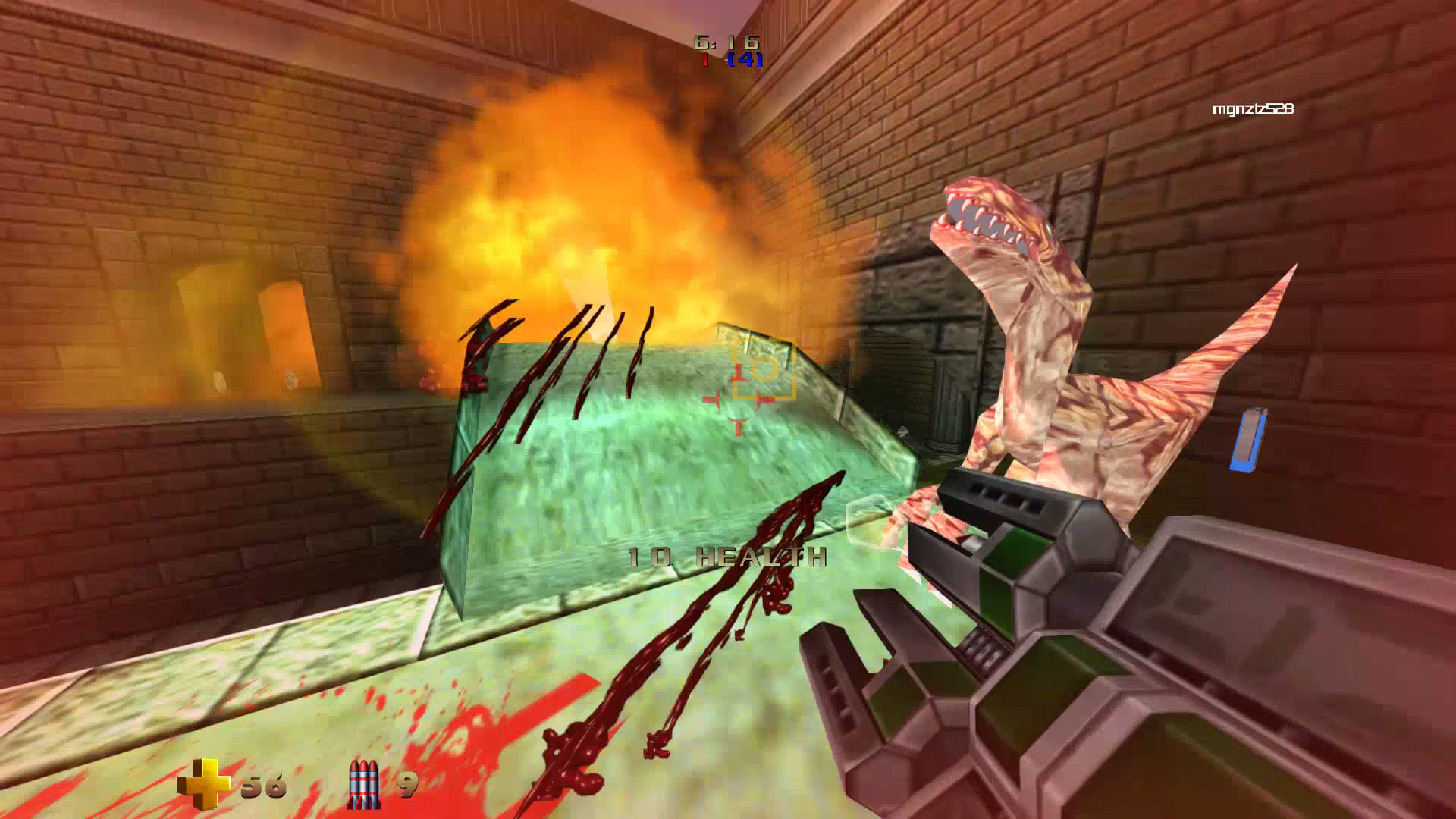 The first moments in Turok 2: Seeds of Evil are much more enjoyable than my experience with the first game. The firearms have a powerful impact, tearing chunks of the enemies and splattering huge amounts of blood as the reptiles writhe in agony. This game is particularly violent, and will appeal to our most sadistic tendencies. Have you ever heard of the Cerebral Bore, a projectile that seeks enemies’ skulls, perforates them to reach the brain while they scream, and then explodes to end their torment? Memorable. Also of note, the blood is not just a chunk of pixels, it actually looks like a liquid pouring like we would only see on the Nintendo 64, with Conker’s Bad Fur Day later on. 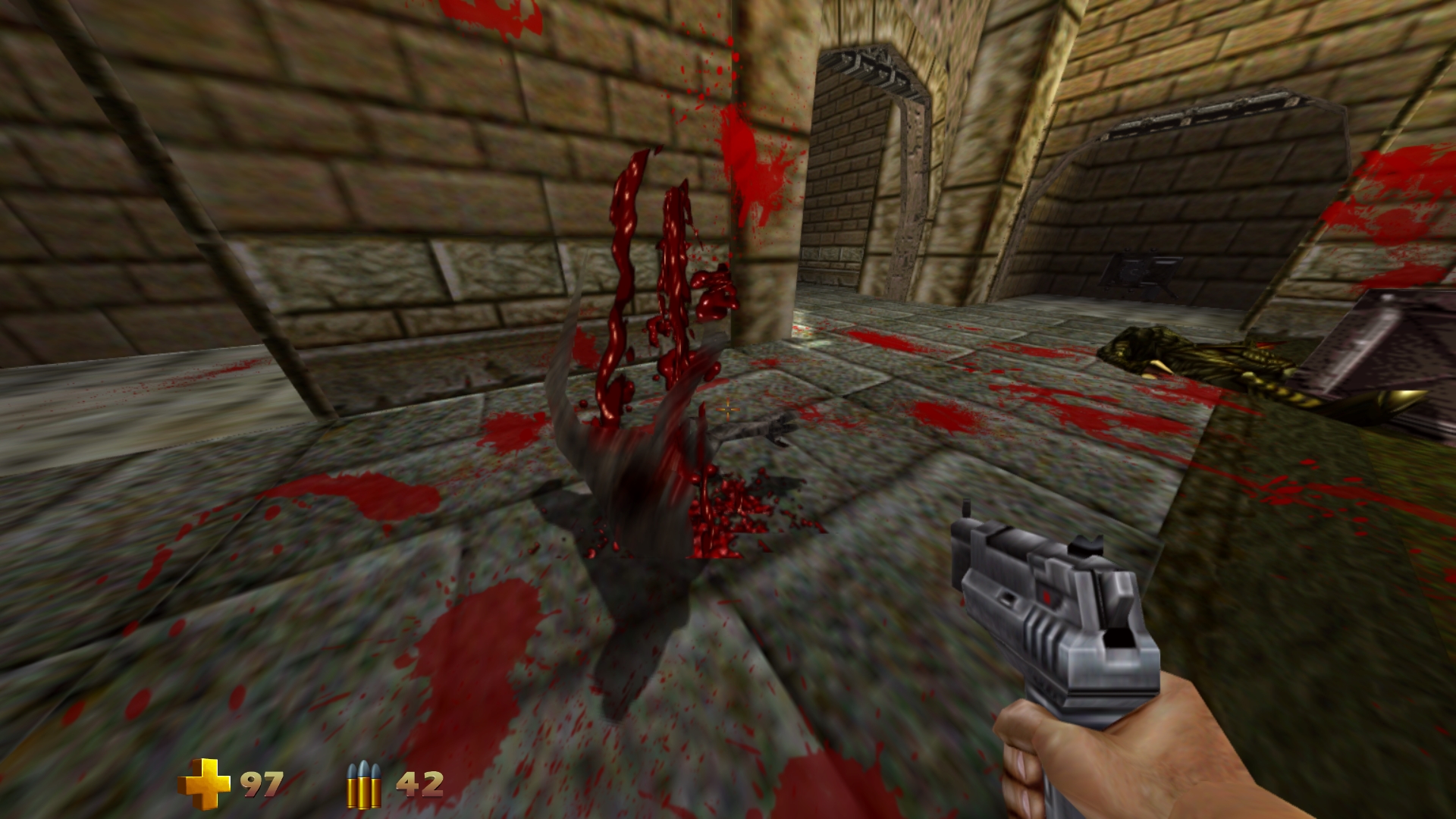 Having never played Turok 2 before, at first I thought that it was fantastic. A bit later, I was surprised at how lengthy the levels were. There are only 6 levels, but they take ages to complete. Thankfully, this remastered version has saves and quicksaves and thus time is less of an issue, but those levels really do overstay their welcome. Even worse, as you progress into the game they are more and more like labyrinths with repeating rooms and challenges that look exactly the same. If the player just had to follow one path as in linear games it would still work out (after all, Halo and Half-Life were very linear), but in Turok there are many interconnected passageways and not only does it become easy to lose one’s way, but also it becomes easy to miss the many many hidden areas that are required to finish the level or the game. You can take two or three hours to reach the end of the level, only to be told that you can’t exit because you missed something and you have no clue where it is located. Great. Then you backtrack all the way, eventually find it because now you are resolved to use one of the poorly written guides on the internet, and you are back on track. Except that you are not fully done with the level, later on you will learn some context-sensitive powers that allow you to reach some new areas and obtain keys to the room of the final boss. Enjoy your lengthy backtracking trips. Oh and also, the enemies do respawn. Not continuously like in Turok 1, but sometimes when you take a teleporter. Overall, it is not a big issue. What is utterly unpleasant is that convoluted level design. 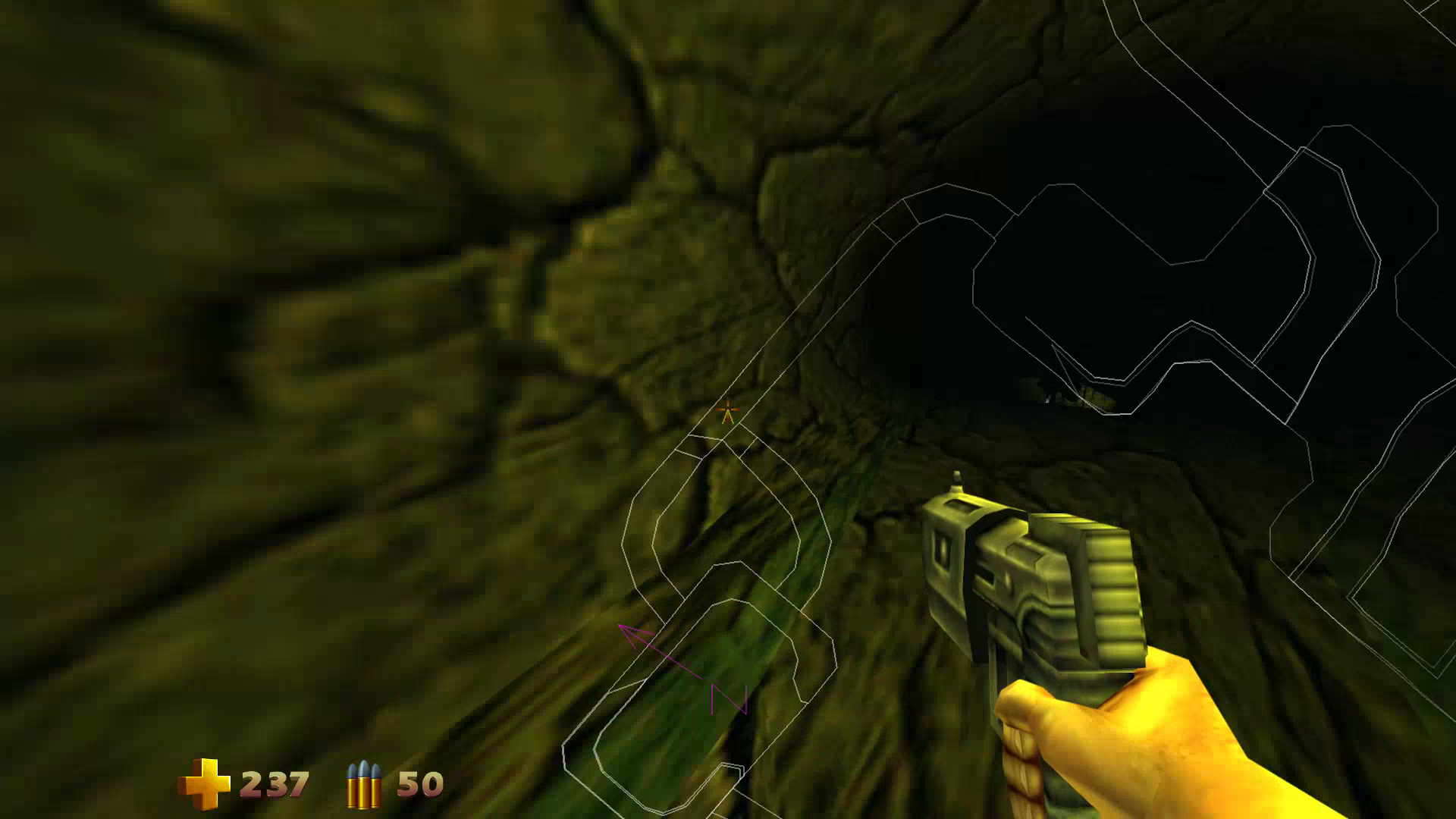 Turok 2 is probably one of the most difficult FPS I have ever played, and I am not using this as a compliment. No wonder that Half-Life released the same year ended up being a huge landmark in the FPS genre, at least anyone was able to progress through the game and reach the end without having to waste time backtracking or searching for unreachable keys, hidden levers and whatnot. I tend to believe that from the moment a player has to look up a guide to normally finish a game, then the developers have not done their job correctly and there are blocks to the enjoyment of a game. A skilled developer manages to always direct the attention of the player to the task at hand or funnel in the right direction, and this language can come from the architecture of the levels, visual landmarks, color of the lights, enemy placement and so on. Turok 2 has some good moments, but so many tedious ones that finishing the game became very laborious. Nightdive Studios tried to mitigate this with subtle changes such as letting the player teleport from any “save-point warp gate” to the other, but I still had less and less fun as I went forward. So… besides nostalgia, where is the appeal in this? 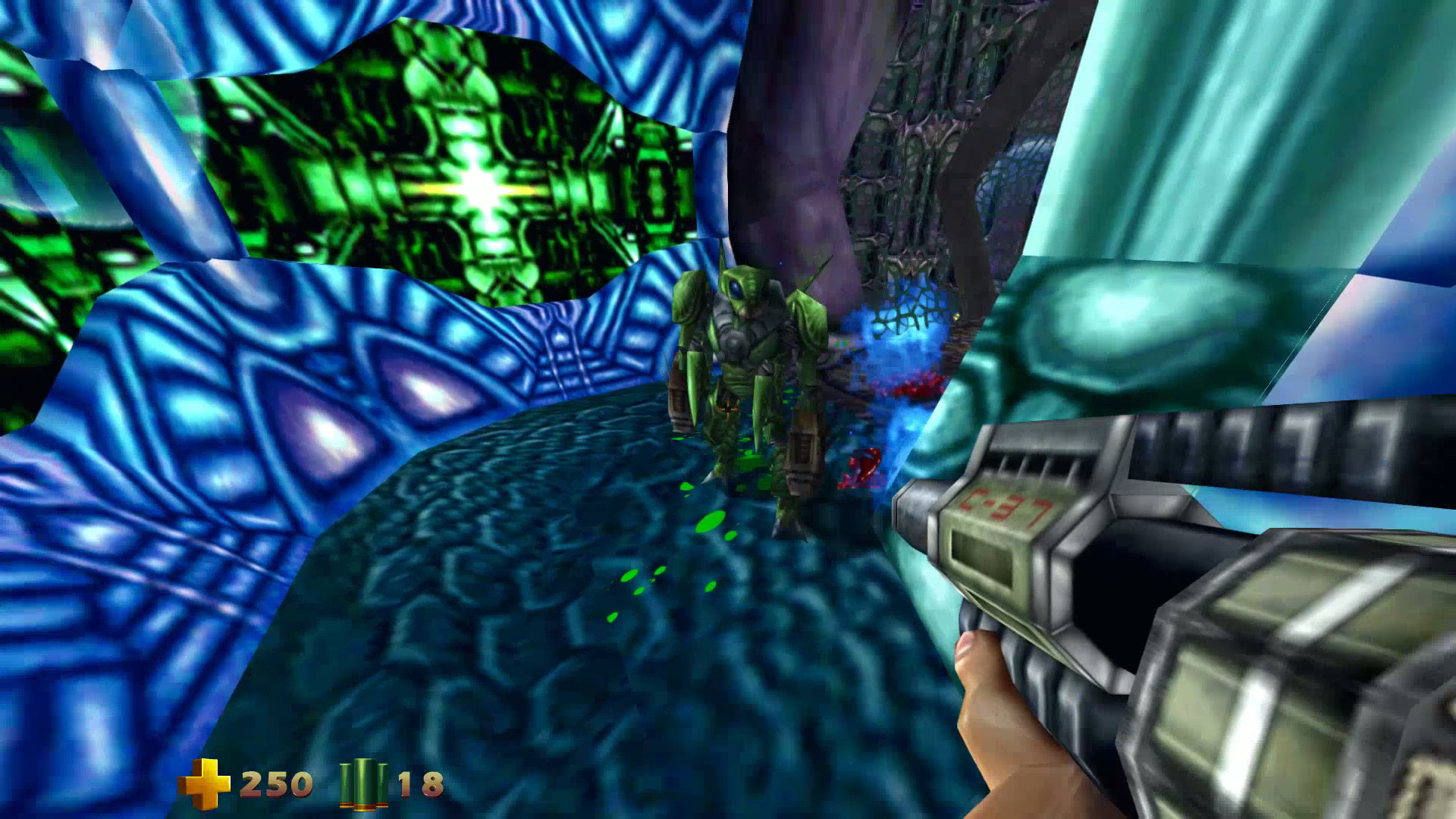 Turok 2 is a huge adventure game. There are jungles and alien spaceships to explore, a gigantic playground filled with secrets and monsters. Actually it makes sense that those that want to be completely immersed in a game for a long period of time will like Turok 2, because there is so much to be found here. Sniper plasma rifles, grenade launchers, shotguns with pellets that bounce around, nuke launchers, claws and let’s not forget the classic bow and arrows. Up to you if you prefer explosive arrows, or arrows that you can pick up from your prey while it’s still fresh. The enemies to massacre range from spiders and velociraptors to alien insects and cyborgs. Some come up close, some shoot at the player from a distance while others do both. Some run in a straight line while others make circles or take cover. Juggling between weapons is an essential part of the gameplay. To hold all of this together, there is a ridiculous story narrated by a funny do-gooder woman whose low poly face and eyes are offensively hilarious next to Turok’s grim richly textured face. And her voice is endearingly laughable “Your oxygen is low :(“. Nonetheless, what is really well accomplished is the build-up of the final boss. Hearing about his evil intents relative to the species you meet each level and having to find those hard to reach keys effectively creates a lot of anticipation! 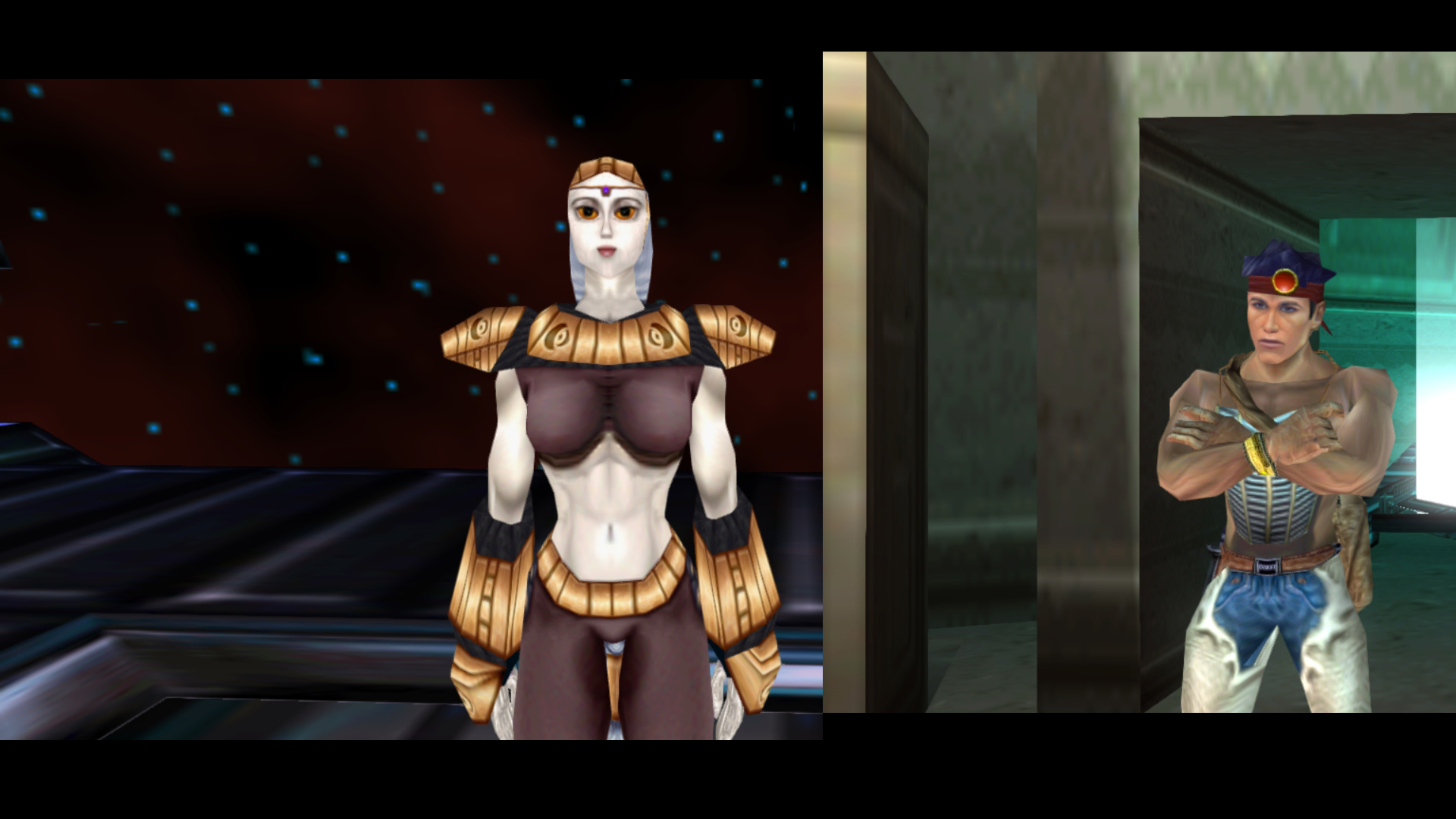 Alright, now that we have dissected Turok 2 let’s talk about the entrails of the beast, the remastering. Well, I am pleased to report that it’s great. My only gripe with it is that capture software made it crash. Apart from that, no single framerate issue. The game has been enhanced with shadows and lighting effects, which can be turned off just like everything else. The increased draw distance got rid of that annoying fog crippling some Nintendo 64 games, and most importantly it is possible to change the FOV (Field of View) to a great extent. Perfect. Mouse & Keyboard controls are on point, except a slight annoyance that Zoom in/out with the sniper is not compatible with changing weapons on the mouse wheel.  This remaster is definitely the superior version, a must have for any Turok fan. Finally, an incredibly useful addition was the highlighting of switches and key items on the HUD (which can be turned off, as usual). I can’t imagine how much worse my experience with the game would have been without this, as it drew my attention to switches hidden in the dark and it let me know what was already activated or not. However, there are still a few elements that are not highlighted (such as barrels that reveal hidden passageways upon exploding) and thanks to Turok 2 I can now fully appreciate the existence of objective markers to orientate myself. This really was a strange feeling, I am not particularly fond of short simplistic corridor shooters but Turok 2 really felt like I should grab them as a comforter while sobbing hysterically in my crib and crying “Dear Raptor Jesus, please make this stop”. 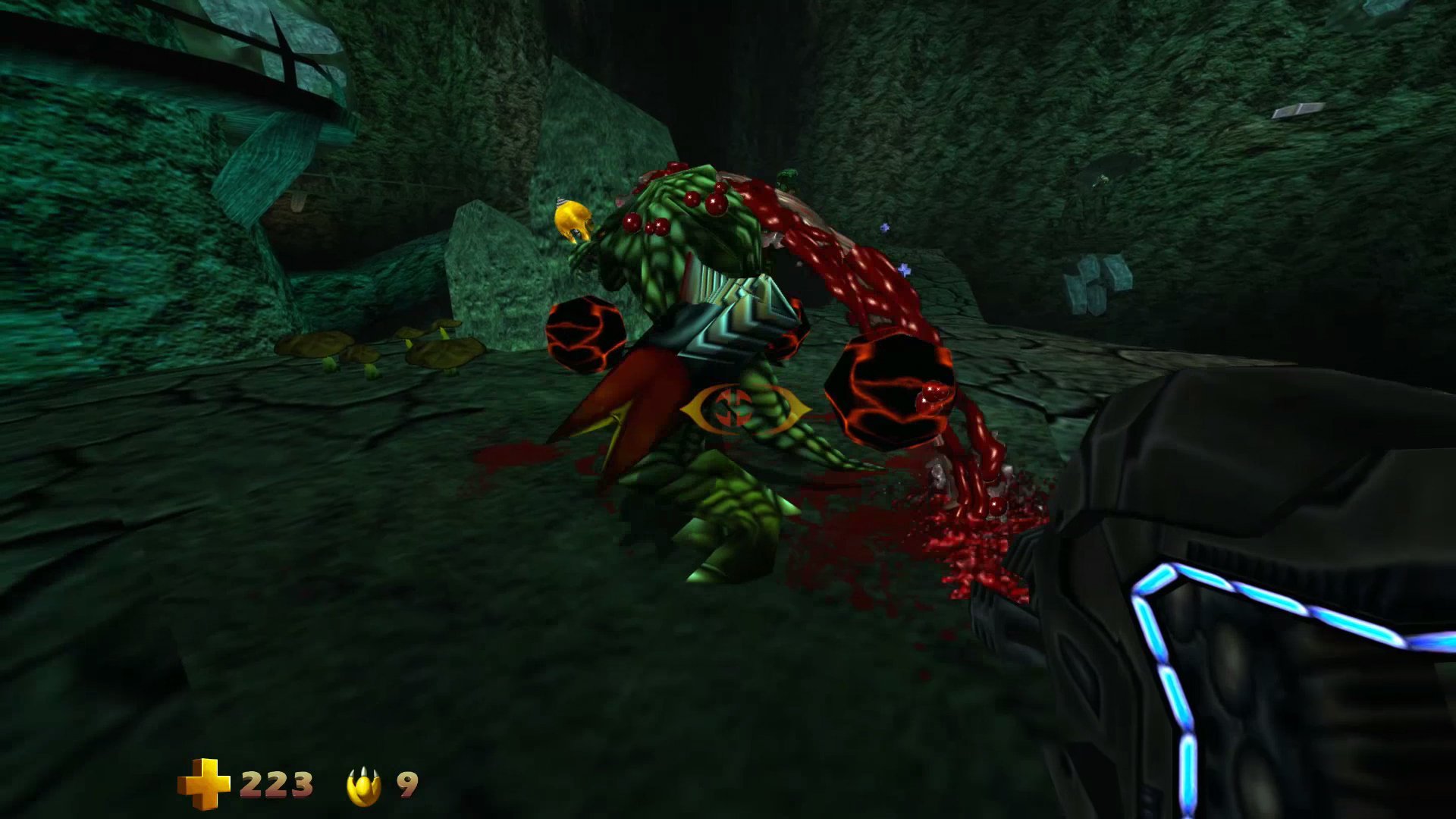 One last mention to the multi-player, Nightdive Studios have done an incredible job. Split-screen multi-player is available, as well as online multi-player. Nice! And unlike for indie games, there are actually people playing this online for now. Groups of Turok nostalgics can enjoy literally picking their brains out with the Cerebral Bore. Not so funny on the receiving end, if you see it on your screen then you know that you are about to die. A perfect time to imitate the AI and scream at your friends. I suppose that you also want my opinion on the multi-player? No, you don’t want it, I keep ranting? Yes, you are right, I did not like it. With keyboard and mouse, everyone is going super fast and we soon witness some sort of incoherent deathmatch mess. 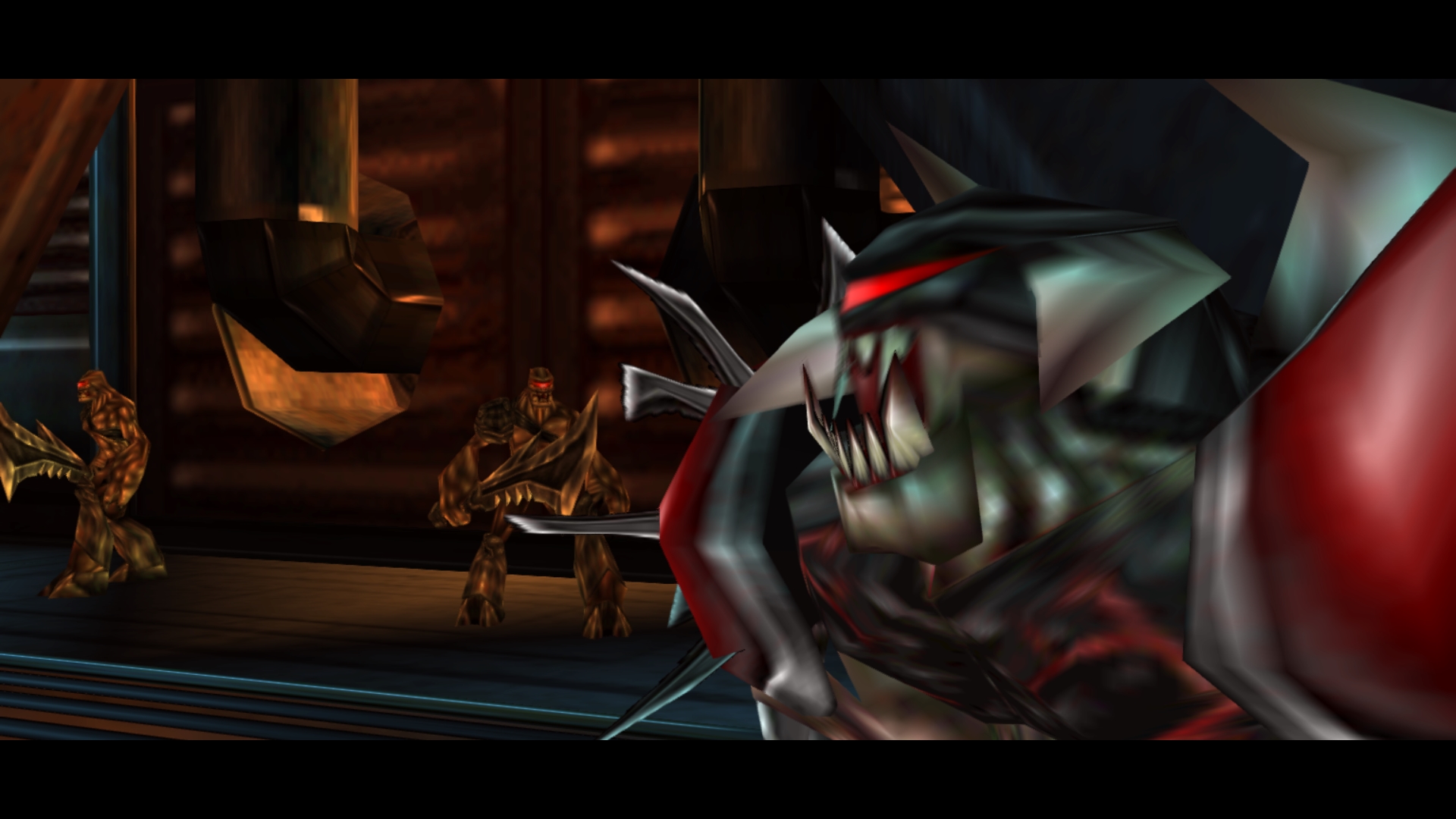 As a conclusion, Turok 2: Seeds of Evil remastered is by far the superior version of this game. Absolutely great port from Nightdive Studios, everything handles as a native PC game should, the options are very complete and any enhancement can be turned off. If you are into Turok, just get it and it’s well worth the asking price. Now if I look at this game in comparison to what is available in the 21st century, and with fresh eyes rather than being clouded by nostalgia… well, the beginning of the game is quite enjoyable with its cool weapons and over the top violence, as well as creative enemy design. But then… the levels keep dragging on and on, needlessly confusing, way too demanding in terms of well-hidden secrets to find, with the unwelcome addition of backtracking. While I can’t say that finishing the game is enjoyable, I can recognize why it would appeal to exploration enthusiasts with its vast and mysterious jungles or futuristic space-ships populated by dinosaurs and many species of aliens. A grand adventure for those that have the patience to bear with its sprawling levels. For others… Save for later. Maybe on sale as a curiosity, or to at least experience one or two levels.

Here is a video if you want to see the game in action: