An old-school FPS made in the Quake engine.

The battle between New Blood Interactive and 3D Realms rages as each tries to publish the best throwback shooter inspired by 90s FPS classics. The neo-retro era has proven prolific to us gamers, with DUSK and Amid Evil on the side of New Blood Interactive, then Ion Fury and WRATH on the side of 3D Realms. The latter seems to take the concept of old-school shooters quite literally as its games are directly made within old engines: Ion Fury with the build engine (Duke Nukem 3D, Blood, Shadow Warrior), and WRATH with id Tech 2 (Quake, Quake 2, Soldier of Fortune). Even better, the WRATH developers were involved in Arcane Dimensions, a mod for Quake that introduces gorgeous new levels and enemies. With such a pedigree, WRATH seems to hold the keys to a resounding success; to say that I was excited for a first hands-on experience is an understatement!

As the game just got released in Early Access, it is an incomplete product that only provides a hub connecting two levels, and the whole experience took me approximately two hours to complete on hard difficulty. Regardless, this was enough to form an opinion on the game, the good… and the bad.

WRATH throws us in a pixelated dark fantasy world. The old Quake engine runs super smoothly and was improved with dynamic lighting, and you can completely fine-tune your experience whether you prefer a polished experience or incomplete animations with chunky pixels. Delightful, thanks KillPixel for giving us these options within the game rather than having to edit .cfg files. Now in terms of atmosphere, while I dig the horror vibe and the character design of the enemies, I am afraid that the levels themselves do not complement well the rest of the game. To be bluntly honest, grey catacombs and brown swamps have been visited so many times that they literally suck the personality out of WRATH. I would have preferred more unique and imaginative places to give the game more character and create a stronger impression, perhaps something gorier in-line with the visual design of the monsters and weapons. Seeing all the other backgrounds for future levels in the HUB area was nice, but I didn’t see anything completely other-worldly. And with such a huge mish-mash of landscapes, WRATH will have even more trouble defining its unique identity. 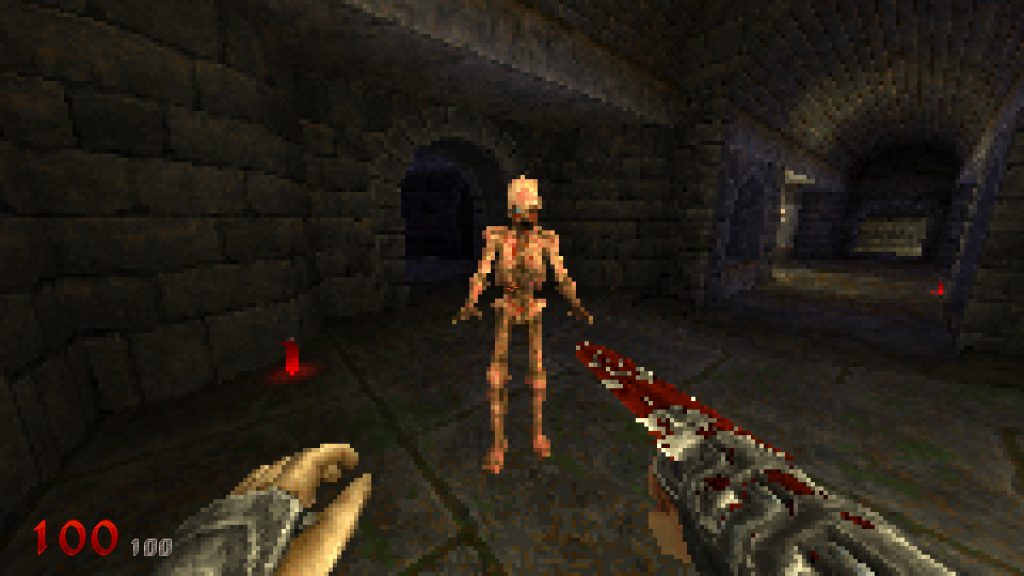 The arsenal starts strongly with a sword that lets you dash forward with its alt-fire, and you can bet that it will help you reach many secrets or violently perforate monsters that dare stand in your way. You can severe limbs and necks, but that won’t stop those pesky Zombies from straddling in your direction! At least the gore is exciting, and you can play football with their heads, which is very satisfying. Then comes a gun with good aim for long-distance engagements, it is neither boring nor exciting but you will soon abandon it for the shotgun. I found the latter useful, but the sound design does not do justice to the power it wields, and it is a bit too slow to reload. Actually, the weapons do not switch fast enough to compensate for this downside; so even though it’s a good shotgun, I was not blown away by its use, and the alt-fire (hold to charge) left me scratching my head. Then comes the Fang Spitter, some machinegun that shoots nails. The primary fire is faster and not very powerful, the alt-fire sounds much better but the rate of fire is decreased. Still, this weapon fulfills its role perfectly when used for crowd control as it mows down weaker enemies and keeps the stronger ones temporarily stun-locked. Then there is some sort of slime launcher; the first firing mode feels like a grenade launcher with a strong projectile that bounces off walls and the alt-fire throws in rapid succession a few projectiles that do not bounce. The arc of the projectiles requires good aim when used at a distance, and the explosion is dangerous in close-quarter combat, which makes this a skilled and interesting weapon to use. Overall, I loved the visual design but did not find the sound effects powerful enough. In terms of balance, I would say that each tool has its use, which makes switching important according to the situation (although I wish that it happened more quickly). The feedback on enemies is stun-locks, copious amounts of blood and then gibs upon death, which all contribute to making the deadly tools fun to use. To conclude on the weapons that I experienced so far: I enjoyed them but I would like to see some fine-tuning. 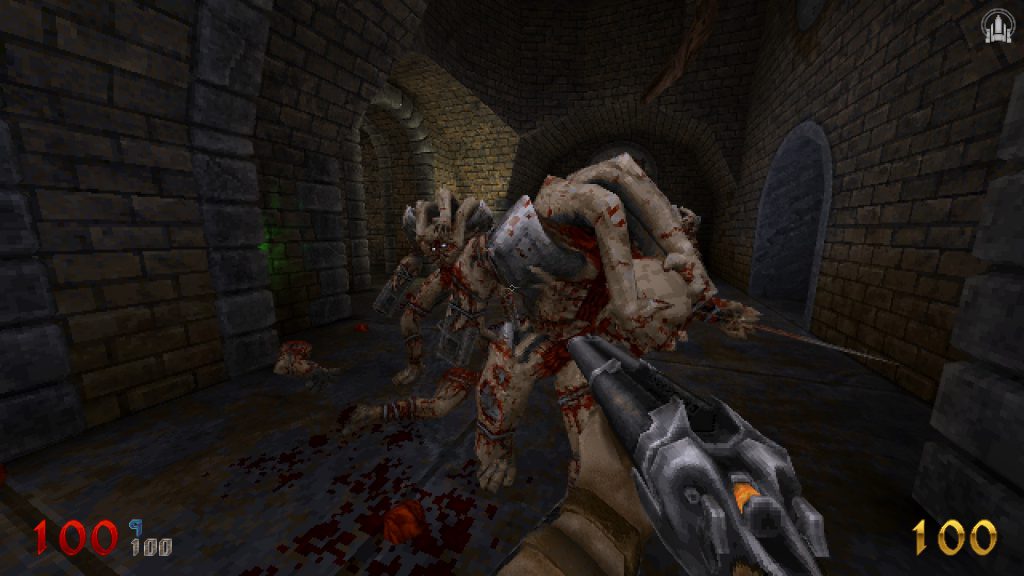 The enemies were for the most part right up my alley: macabre horror and twisted flesh. I loved all the visual designs but the exploding green men, and there is an appropriate balance between melee and ranged, aerial and ground. There are lots of weak enemy types to dispatch with a few well-placed shots and bigger stronger enemies that require more strategy. I only regret that the large bull-type hooded enemy charging the player is hard to avoid: I usually like to kite monsters and play cat-and-mouse, while here it’s mostly about having to kill him before he can close the distance. A bigger issue was that the AI was sometimes stuck behind a corner, leaving its flanks exposed to the merciless player. In terms of sound design, you can expect to hear groans and gurgling in the corridors nearby, knowing painfully well that you are not alone… Some fast runners can even trigger some jump scares out of you with their screams, brilliant! Finally, when enemies die they can drop ammo and health, which provides some incentive to push forward. 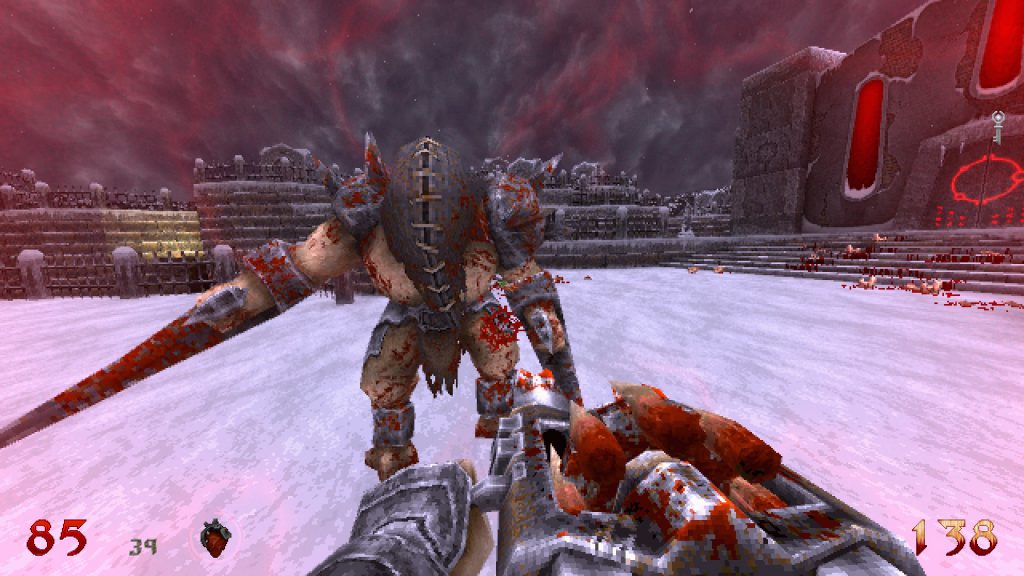 Together, monsters and weapons combine to form very enjoyable fights: sometimes the baddies have to be picked off from a distance, sometimes they lurk behind corridors, sometimes they spawn in an arena. I had to switch weapons according to the threat, prioritize targets and dance between projectiles while cutting my opponents to pieces: all the raw ingredients for a perfect experience are here. However, there is something off with the aim and movements. I had to activate mouse smoothing in the menu, remove some camera effects, but there remained one thing that I could not change: the movements. WRATH is fast, very fast. While I do prefer fast games, the problem here is that moving instantly goes from 0 to 11 with no in-between, and the character does not control smoothly. It feels very imprecise and annoying, which is even worse while platforming as some ledges can almost make you bounce off a surface that you wanted to climb. This is all the more frustrating as there is no quick-save/quick-load in place, and you often have to begrudgingly climb back up only to fail again. This made hunting for secrets a sometimes frustrating experience. You might have noticed that I said no quick-save and no quick-load, and this is due to a completely different system put in place: you occasionally find relics that you store in your inventory and activate to create a save point. I have a neutral opinion on this, as I was sometimes frustrated during the aforementioned platforming sections but I also enjoyed the higher tension of losing progress upon death, while still being able to choose myself when I wanted to save. Perhaps an issue with this system is that it didn’t let the game become too sadistic and throw too much heat on the player so that the experience does not become too frustrating. While I appreciate the route that was taken, I think that it makes the game sometimes feel too easy, and I might have preferred more difficult encounters made possible by the quick-save/quick-load system. All in all, WRATH handles its combats very well but the movements definitely need to be improved before the final release. 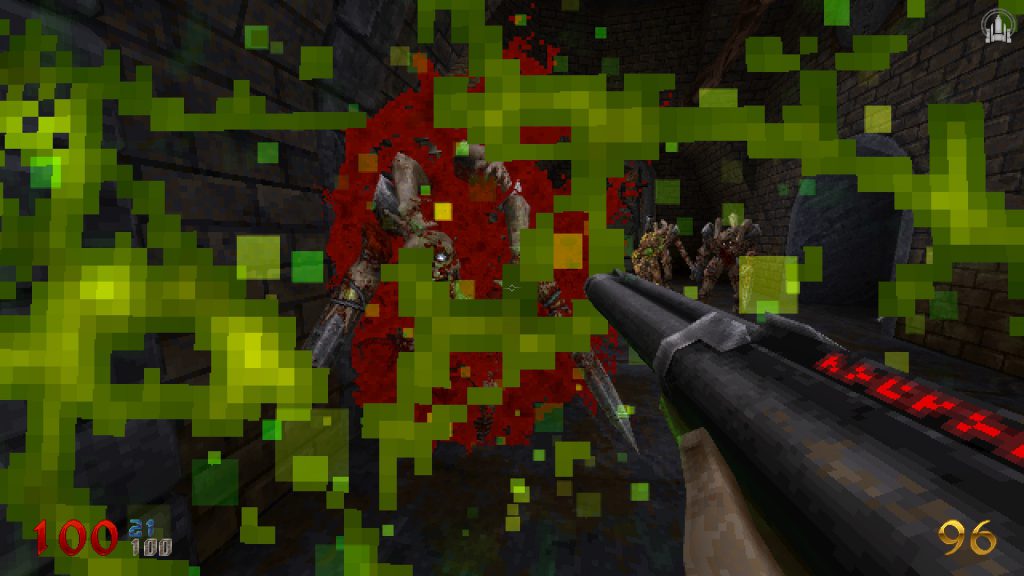 I kept the worst for last. I already criticized the levels for lacking visual character, but the level design is also not up to par with the classics of the genre or DUSK more recently. There are some vast areas that seem to be large just for the sake of being large, just like many games from the end of 90s and beginning of the years 2000s’ once they had freed themselves from the tight corridors of the id Software era. Thankfully, this does not happen too often in WRATH and the vast majority of the levels are encounters within a reasonable distance. However, the problem is that the corridor themselves seem to repeat and many areas are indistinguishable from one another, especially in the catacombs. Not only was it often hard for me to see landmarks to find my way, I also felt that some areas were going on forever. With levels that last for sometimes more than one hour, I think that I have clearly identified the problem: quantity over quality. I am a bit unfair, there are some good moments and the level in the swamps was much better designed. But clearly, the level in the catacombs is a weak link and it needs to be shortened. 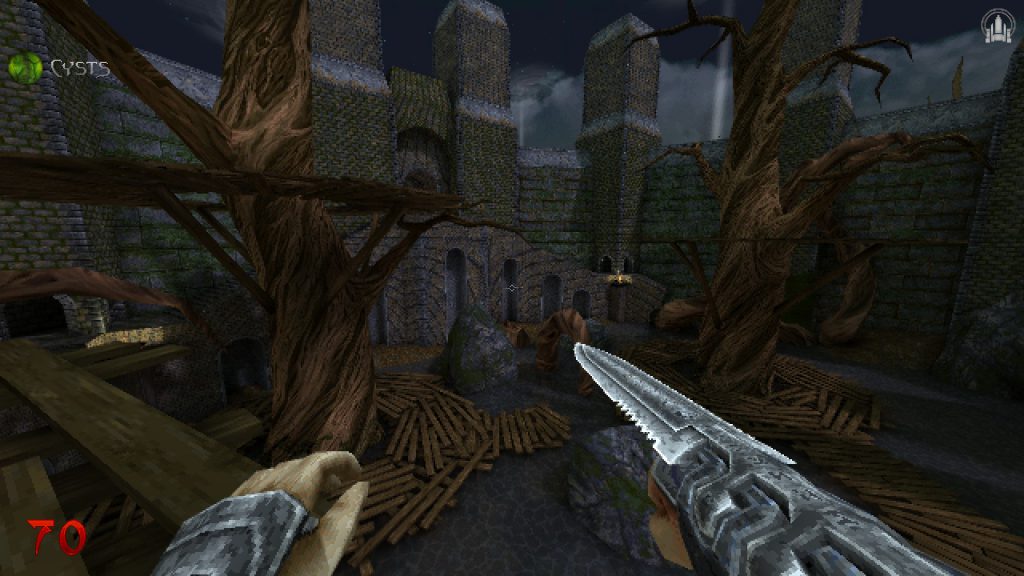 WRATH does not live up to my expectations, but the good thing is that there is nothing that cannot be rectified during its time in Early Access as most of the groundwork has already been done. So far, the enemies offer meaty combat and the weapons are in the right direction. But the movements need more finesse and control, and most importantly the levels are completely undermining the rest of the game! They offer a generic atmosphere that does not let WRATH claim a unique identity, and the levels are sometimes too long, repetitive and tortuous rather than being short and sweet with unique tricks that mark the progression. Constructing shorter levels with a stronger identity is what WRATH needs more than anything if the game hopes to stand out. For now, the path has been laid for a long adventure with many different settings and none that stands out, so let’s hope that the time in Early Access will be put to good use to make a better final product rather than simply adding more of the content that was already planned.