Dry Drowning is a detective thriller visual novel with choices and consequences. We take on the role of Mordred Foley, a cynical private investigator trying to get by and making a living together with his work partner Hera with whom he has a very close personal relationship. The year is 2066 and the future couldn’t look any bleaker. Mass brainwashing, police brutality, political propaganda, and xenophobia are all vastly prevalent. While all this is going on, a twisted serial killer returns from the past, killing his victims in a brutal manner to mimic the scenes from Greek mythology. Mordred and Hera now have a chance to redeem their past misdeeds, but at what cost?

The game mainly centers around the investigations of murders committed by the serial killer. However, there are other important events that are connected to it too, events that have repercussions on a larger scale, affecting the entire city. The city in which the game takes place, Nova Polemos, is an entirely independent city that is gated to the outside world. A lot of political themes play in the game’s plot, and generally the setting has been developed really well. A lot of thought was given to this dark version of the future and how human nature combined with advances in technology create a dystopian society for everyone. 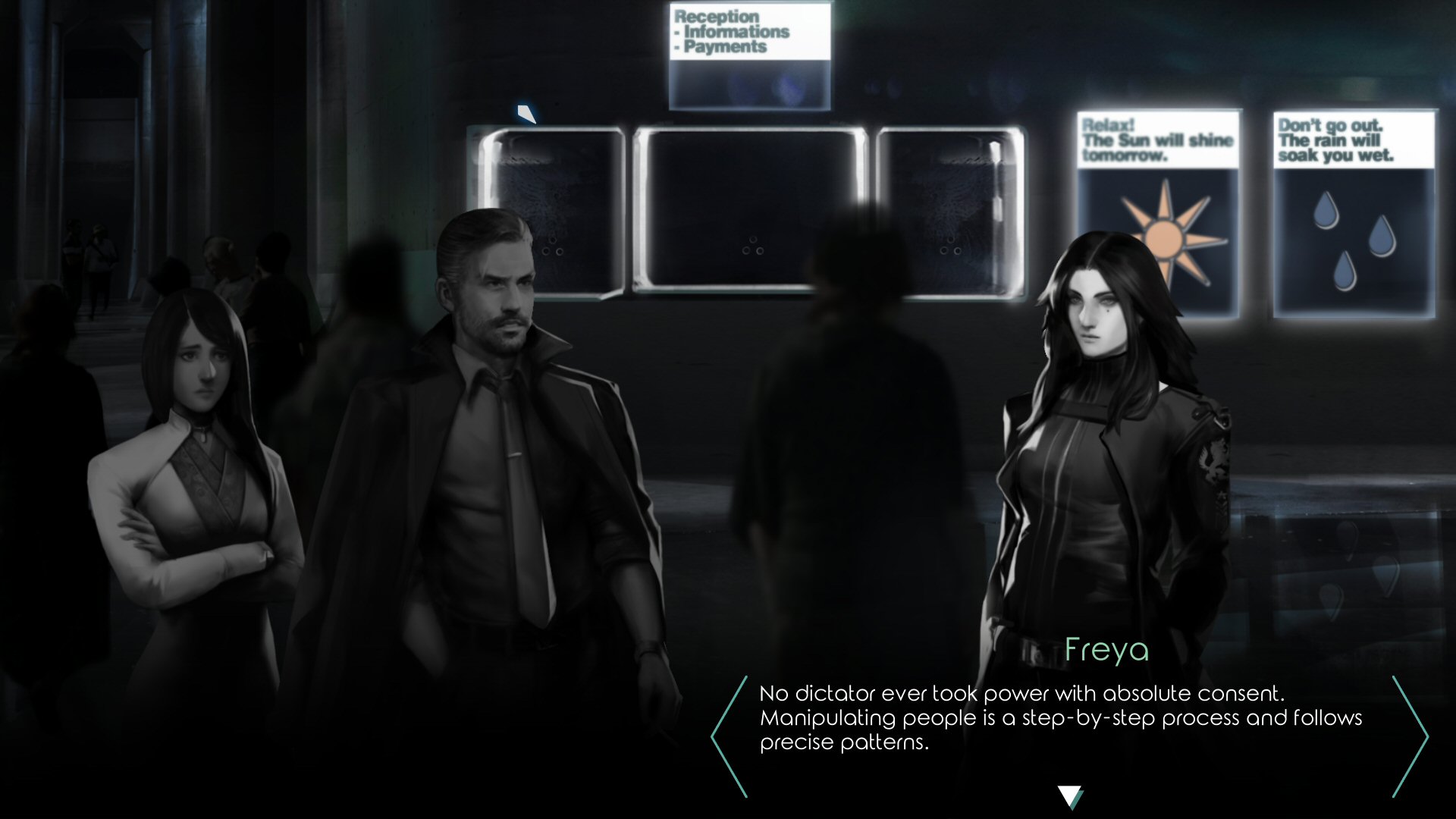 The game is mainly broken down into 3 acts. Each act has its own story arc and they are spaced a few months apart, but all of them are connected together into one overarching story. There is a great deal of tension and mystery in the plot. The game manages to create intrigue well and often manages to surprise us with its events and plot twists. In addition to that, the characters are all pretty interesting and behave like real people. The development of two leading protagonists, Mordred and Hera, is especially good, as they live from one bad situation to another while trying to stay strong and keep trust in each other. 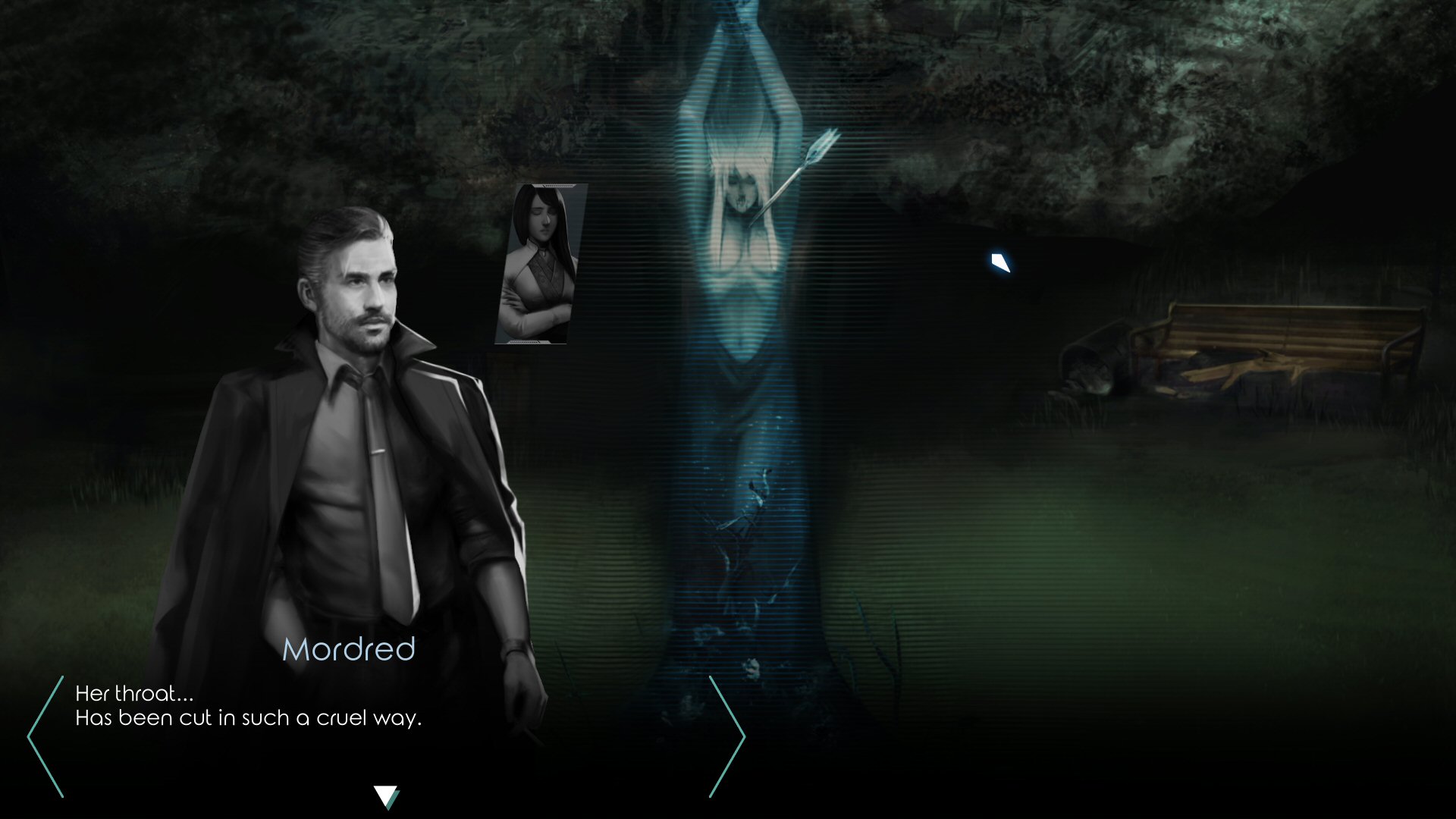 One of the big aspects of story-telling in this game also are moral choices. The game has several of them coming up in different parts of the story and most of them seem to have a pretty big effect on the developing events and ending. It always impresses me to see a game that puts so much effort into making its choices meaningful. Moreover, these choices are often not quite black and white, and even those which seem like the lesser evil often come back to bite you later. With most of those choices, there is no win scenario and you have to make peace with which evil you’d rather have. This game will really test your moral compass and is exactly what choice and consequence games are supposed to do.

Perhaps the only minor criticism I’d mention about the story is that because there are a number of different arcs tied together, at times the plot can feel a bit unfocused and jump too much between the different arcs. In a couple or so parts it does a bit of an info dump on the backstory or character revelations, which can hurt the pacing and plausibility a bit. However, these parts are relatively few in number. 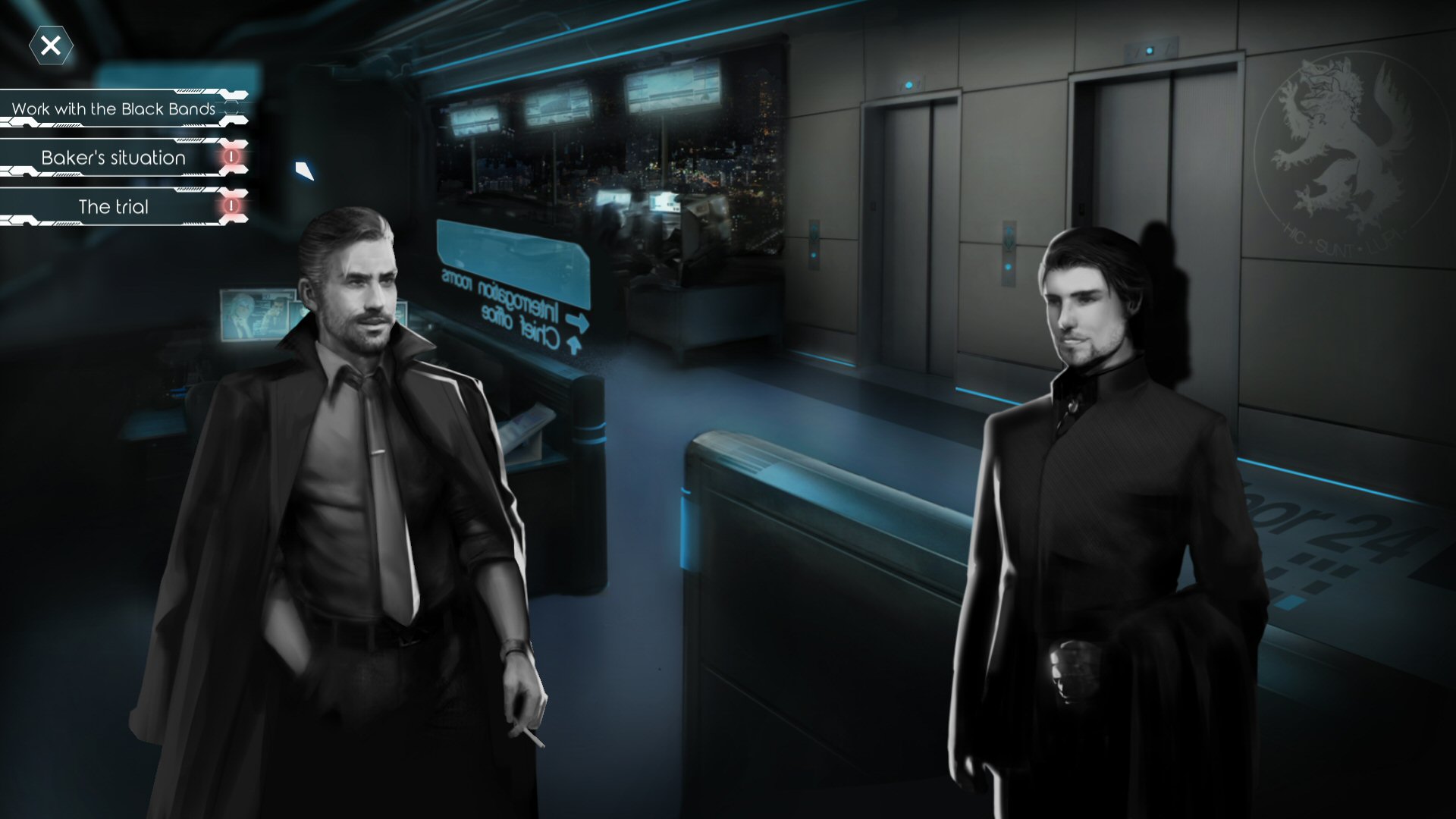 The game is a visual novel for the most part, with some point and click elements. For most of the game we go from area to area to engage in dialogue, explore the locations, and solve occasional puzzles. There’s no actual character movement of the sort. As soon as you fast travel to the required location, the dialogue is triggered straight away. In some of the areas we can investigate the environment and click on various parts. This usually happens when we’re analysing crime scenes. The characters discuss important details and move the story forward this way.

However, there are some challenges present. This is not just an interactive story. We do have to solve each case by collecting enough evidence and then confronting characters about it. 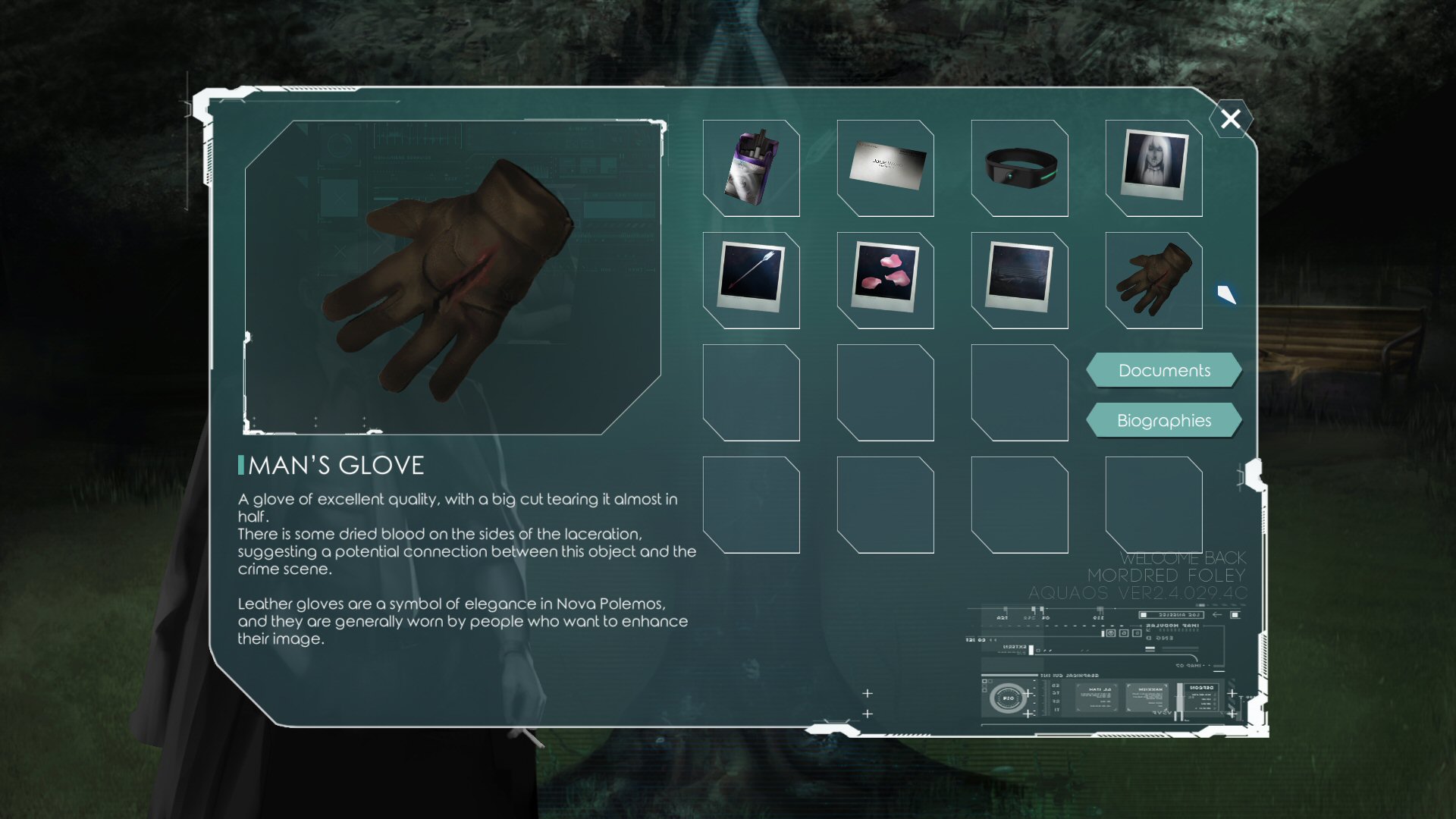 One of the interesting ideas the game has is that the main character, Mordred, has a strange psychological condition where he sees a hideous mask on someone as soon as that character lies. Mordred, being cynical and distrustful of others, has a strong sense towards noticing lies, so when someone is not being honest, to Mordred it’s equivalent to an enemy that he has to overcome, and he does it by collecting evidence and then using his logical deduction to unmask the liars bit by bit. During these important ‘living nightmare’ dialogue scenes, we have to use our wit by choosing the correct evidence to present at the right time and making correct deductions based on what we’ve observed. We’re allowed up to three mistakes for each such dialogue (represented with floating eyeballs above Mordred). If we mess up, we get a game over and need to retry from the start of the entire conversation. 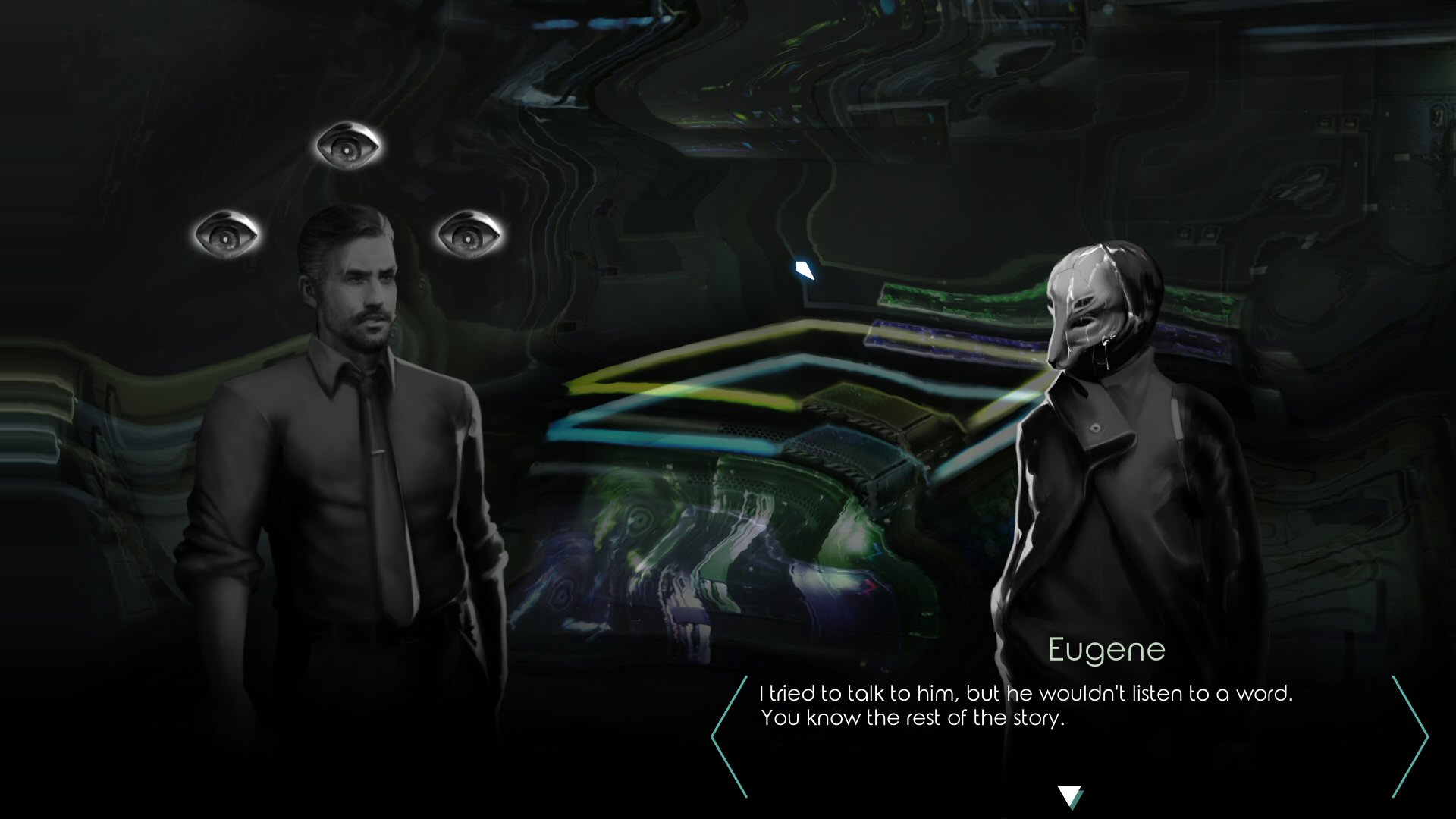 In some parts of the game, we have to solve puzzles and riddles. These are integrated into the plot and do not feel random. As serial killers sometimes like to play games with the detectives in stories, the same applies here too. Most of these take a form of deciphering cryptic messages that the killer leaves behind.

The art style is very good at conveying a dystopian futuristic world. There are nice environmental backgrounds in each area to help with this. But better yet is the character art. It’s incredibly detailed, and the characters show movement during dialogues, such as blinking, breathing, and changing facial expressions. They look very lifelike, which adds greatly to their already nicely-developed personalities.

Some of the still art pieces are also really great, especially to enhance the tension in some of the scenes. 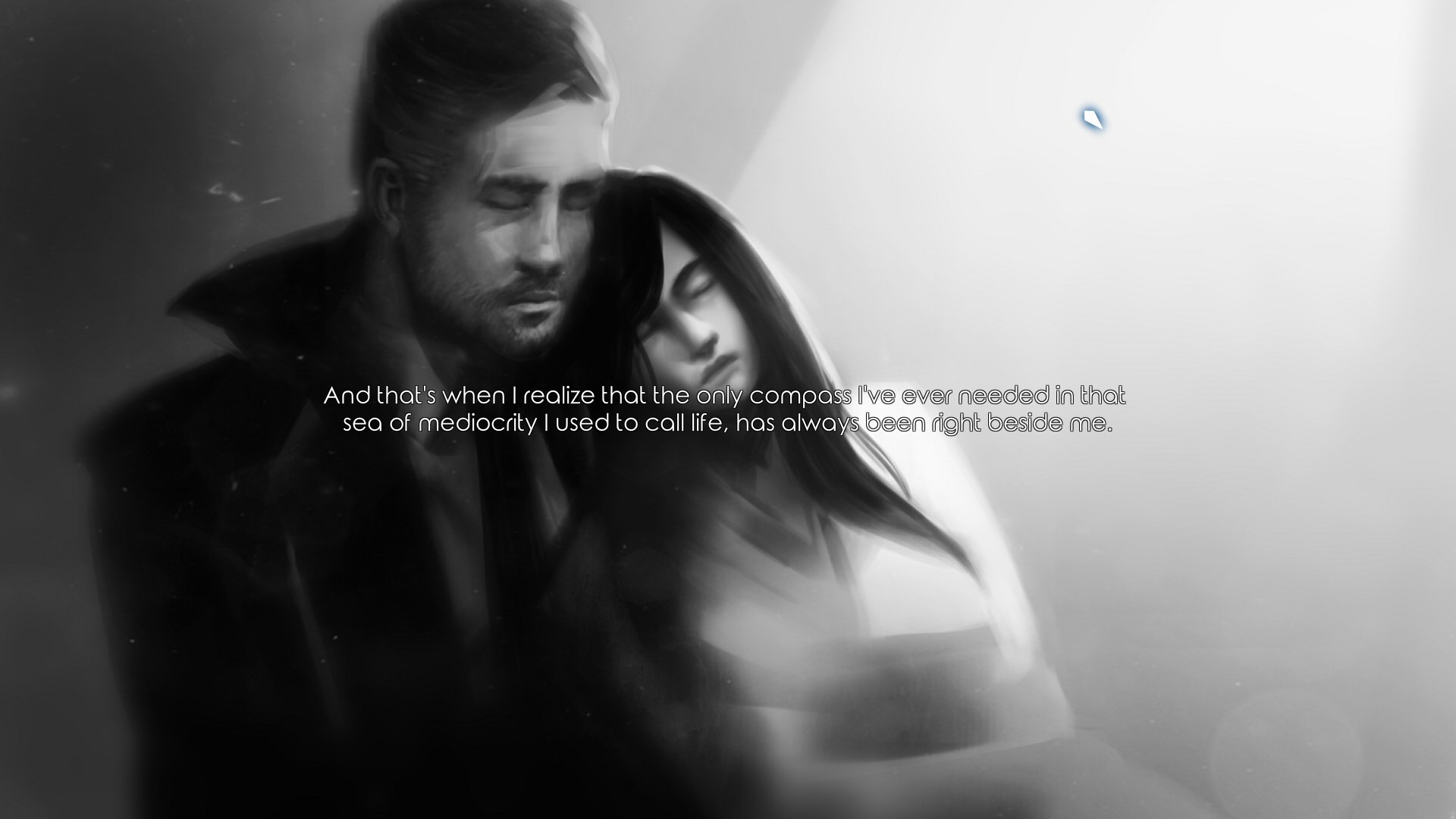 The music is another aspect of the presentation that is pulled off incredibly well. It captures so much emotion and fits every scene perfectly. Analysing the already disturbing murder crime scenes feels a hundred times more disturbing when the music has such a mysterious vibe to it. And having melancholy tunes play during personal moments makes us sympathise with the characters and the burden they carry.

There’s no voice acting. As is common with visual novels, all text has to be read. Since music plays a big role in communicating the emotion of each scene, the lack of voice acting is not noticeable at all. 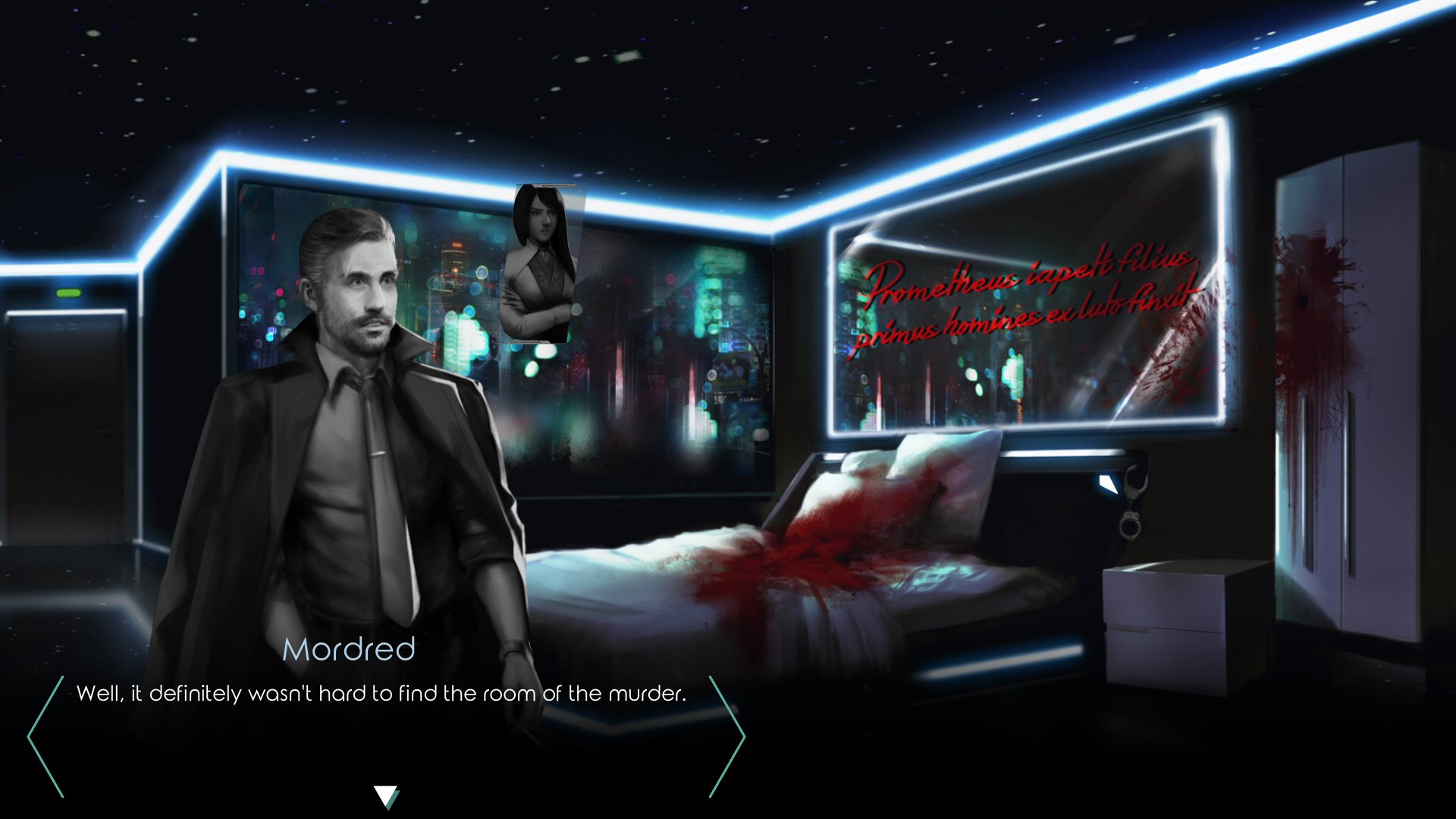 This game kind of took me by surprise. It has a really gripping story and an excellent world-building and character background. There were many parts in it which were unpredictable and kept me hooked. And the meaningful choices make it all the better. I think this is one of the best thriller stories we have in the gaming world so far. The gameplay here takes the supporting role, but it adds just enough to keep the player engaged and use deductive reasoning. The superbly done visuals and captivating music greatly enhance the dystopian mood and tension in each scene and location. If you enjoy murder mysteries, dystopian settings, and disturbing story events that pull no punches, especially when coupled with political themes and personal drama, then go and get this game right now, or at least add it to your wishlist. This hidden gem should not be missed.