Another wild descendant of Quake appears!

Until a few years ago, the market was severely starved for old-school shooters in the vein of Doom and Quake. We’ve since had a bunch of quality releases such as Dusk and Prodeus that quenched our thirst for blood. However, the recent Realms Deep stream of all new releases in the neo-retro FPS genre showed that, if anything, we are currently heading toward indigestion and a serious risk of food poisoning. I’m not even joking, as a fan of the genre I was completely put off by many of the games shown in gameplay reels and underwhelmed by most of the demos that I played. Freshly spawned in Early Access, is Dread Templar one of the few good ones or one of the many crappy ones?

Dread Templar begins close to Quake territory with its brownish underground mazes inhabited by fleshy monsters, notwithstanding its beautifully chunky graphics oozing with pixels. The second episode develops a personality of its own, with its torrents of purple slime revealing mass graves down the sewers. While the first weapons in the arsenal look far too common (and they are not centered on the screen~), the latter weapons look like they were forged by demons and they kick ass. They are probably the most striking elements to the “Templar” theme, as the rest of the game is probably too light on its own theme. Well, apart from the excellent boss fight at the end of the second episode. There is some sort of story in-between episodes, but it’s barely intelligible. Not a bad sign as in that genre, the story comes last. Finally, the metal music is good but too relentless and seems at odds with the quiet moments of exploration in the search for secrets.

Overall, the art design didn’t leave the most impactful impression on me, but it definitely met my expectations and feels far better than most newcomers to the genre. 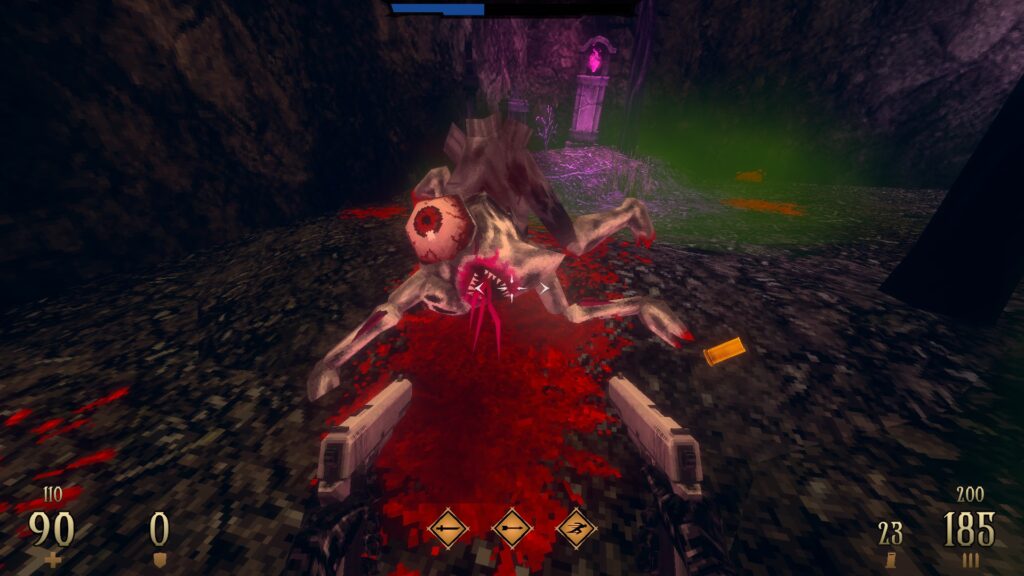 My initial encounter with the game was disappointing because the first level doesn’t flow very well, and I was constantly hindered by some secondary game design mechanics. There are crates to break to find ammo, but this is a Quake-like game, not a slow burn adventure like Half-Life! I don’t want to think about stopping every few meters to break some crates! Eventually, I decided that I didn’t need more ammo for the basic gun and stopped bothering, but this was a painful start. Furthermore, there are no quicksaves and quickloads, but instead, there are manual save points (and autosaves) here and there in the level. These savepoints are a pain too: Press E, click on one of the entries in the list of saves, click save, done. In games all about speed, this is too slow and cumbersome! I wouldn’t mind doing away from multiple entries so that pressing E is all that is required to do. Going back to that first level, the layout is confusing, and there are some unnecessary larger areas with multiple annoying enemies that do not hitscan but are so quick that they might as well be categorized as hitscanners. It took me a few levels, more weapons and more enemies to get into the groove of the game. 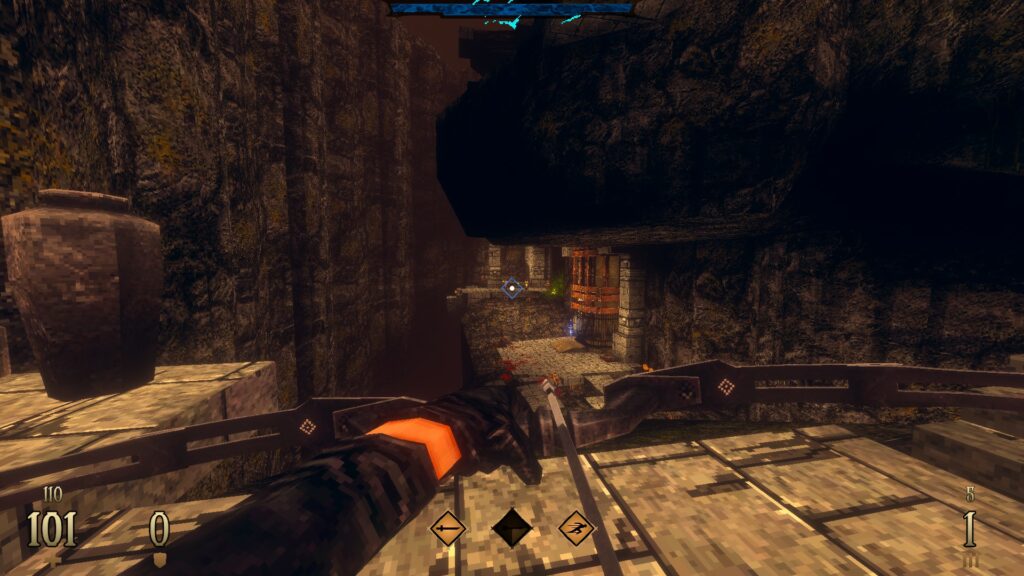 And I am glad that I persisted, as the level design improved drastically even though it was occasionally troublesome to find out where to go because the paths didn’t need to be taken in a linear order. There was that sort of keep that required to open and explore different networks of sewers. There was this cave with poison water and enemies on the walls. There was this vertical descent. There was this ominous large purple room that required to take its underground tunnels before ascending. There was this Serious Sam-like open area with waves of monsters as the player progresses. I am not going to list everything here, but you get the idea: after the slow and tedious start, there is lots of variety and the game kept me engaged. To complete the picture, there are plenty of interesting secrets to find, including upgrades for the weapons that will justify replaying older levels. 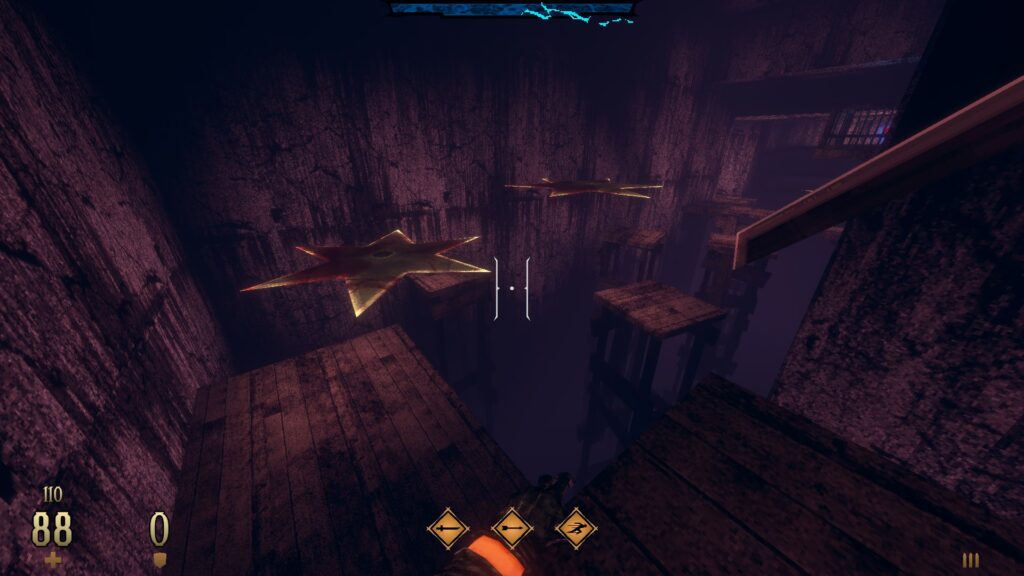 As I mentioned before, my first impression of the game was on the negative side. The first weapon is a sword that can also be thrown, but the throw is on cooldown. Between the cooldown and the switching animation between both modes, it is very cumbersome to use and I often felt frustrated when I wanted the sword to crack open some crates… right after I had thrown it to kill an enemy and my hands were painfully empty. Something needs to be done to smoothen that weapon because the throw is awesome. It acts like a powerful free shotgun shot with infinite range, ideal to initiate a fight or kill a surprise assailant that suddenly appeared at the turn of a corridor. 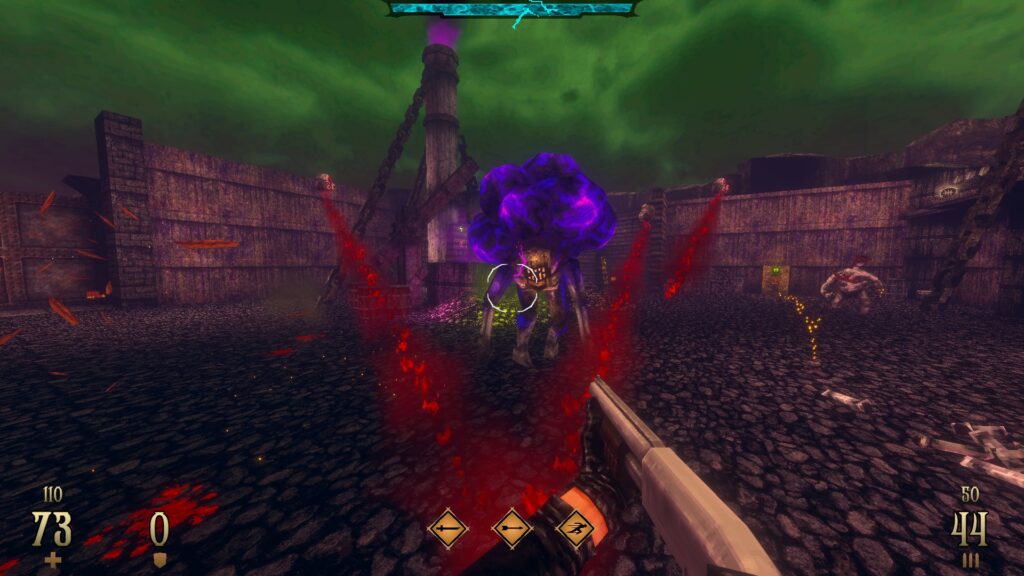 Then there is a useless shotgun quickly made redundant by the double-barreled super shotgun. In DOOM 2 and Quake, the first shotgun deals less damage but it is more accurate over long distances. In Dread Templar I was just annoyed to mistakenly switch to that weapon. That was at the start of the game; once I found the right upgrades, that shotgun performed its role perfectly and I was happy to use it. 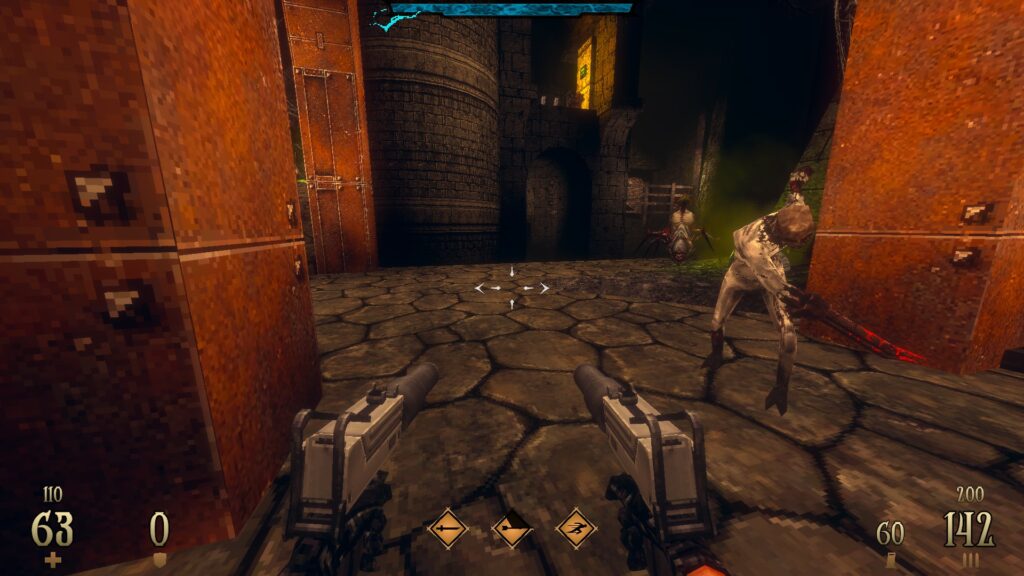 I won’t dwell on describing all the weapons, but I will mention that the last ones on the list are pretty cool. One is a railgun-revolver, the other is some sort of gauntlet with a huge blast that reminded me of Blame’s gravitational beam emitter. 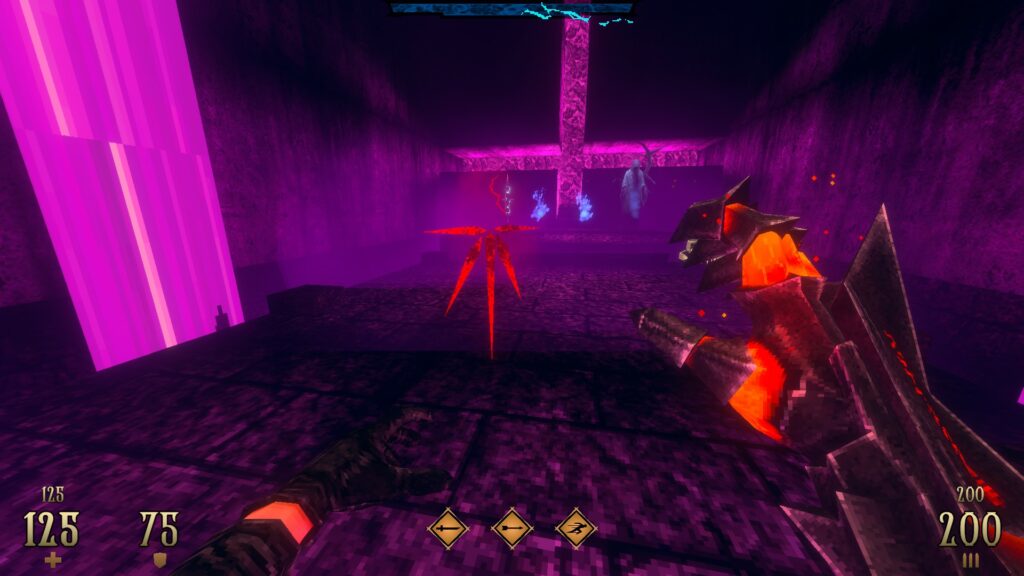 The gunfights are nervous and satisfying, especially since there is a dash to quickly move out of the way. Downed enemies spray blood all over the place. As the game progresses, there are more fights against groups of enemies in small rooms or large arenas, and the game shone a lot more there than during the early skirmishes. Even the AI is more than competent, able to chase the player. There is also a slow-mo ability that refills with each kill and can be triggered at will, which helps when dealing with dangerous foes, as all the right archetypes were included to make for a well-balanced bestiary. 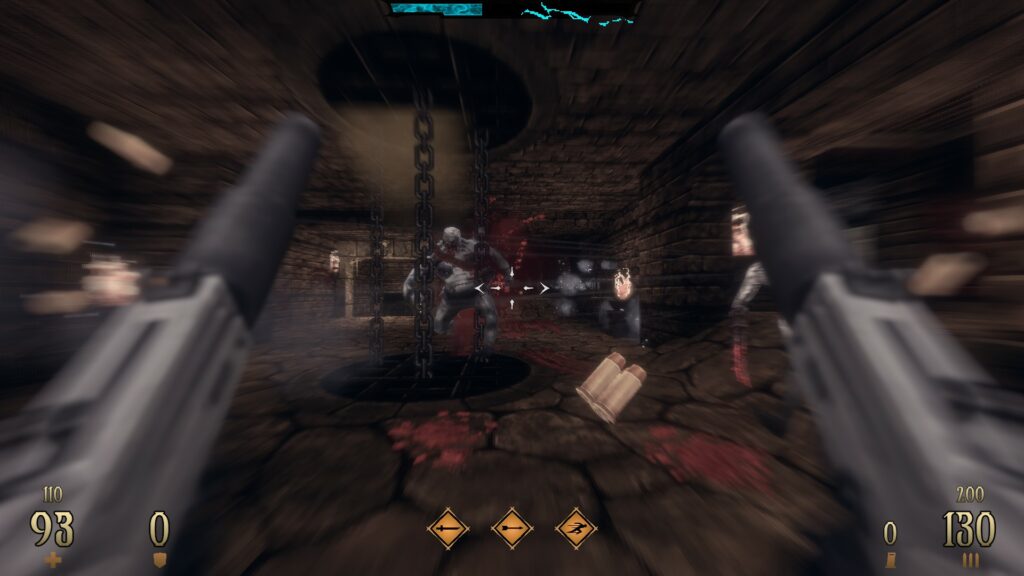 For now, Dread Templar offers from 3 to 8 hours of gameplay, depending on the difficulty that you pick and your drive to hunt down all its secrets. I found the game to have a weak start as some details need to be ironed out, but then it elevates itself to a fun and challenging shooter with intense combat and variety in its level design and bestiary. Despite its imperfections, I am hyped to finish the game upon release, which is more than I can say for most neo-retro shooters. Not quite yet one of my top picks in the genre, but heaps ahead of the incoming torrents of sludge.