HROT released its first (out of three) episode in Early Access, and yet it looks and feels almost like a specific title from 1996: the legendary Quake. While I have a certain distaste for the low-effort mediocre Wolfenstein 3D clones that are being released haphazardly on Steam, the low-poly descendants of Quake in the current wave of neo-retro FPS games have been surprisingly qualitative with successes such as Dusk and Amid Evil. Let’s see if HROT is as good as its faithful looks.

Beware of spoilers: this is the last level of the episode.

From the low-poly graphics to the pixelated brown textures and water distortion effects, from the icon of the game representing a nail to small details like in-game messages and fonts, from the square-shaped blood spatters to the dogs hunting the player and ogre-like enemies launching grenades and basic soldiers dropping backpacks upon death, HROT feels like a Quake mod, or even an expansion pack adding new enemies. And yet, it runs in a custom engine programmed by Spytihněv, solo developer of HROT. The faithfulness to Quake is impressive and will please anyone nostalgic of the classic. 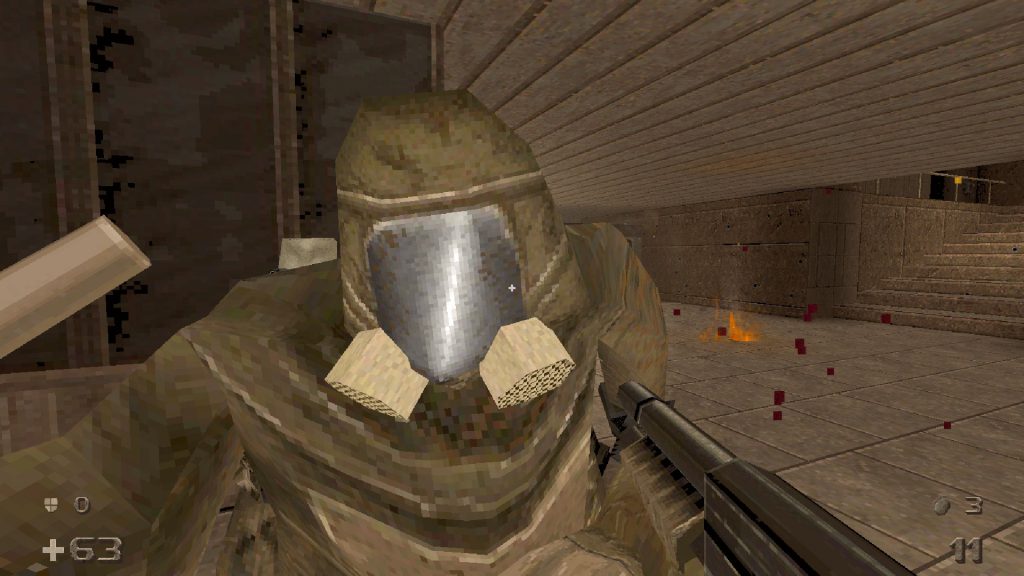 However, while I listed an uncanny list of similarities, HROT still manages to be its own beast as you will gradually discover during this preview. The setting is not eldritch medieval castles nor futuristic military bases, but rather an alternate 1986 Czechoslovakia, seamlessly merging soviet bleakness and brutalist architecture with the otherworldly nightmarish feel of Quake. 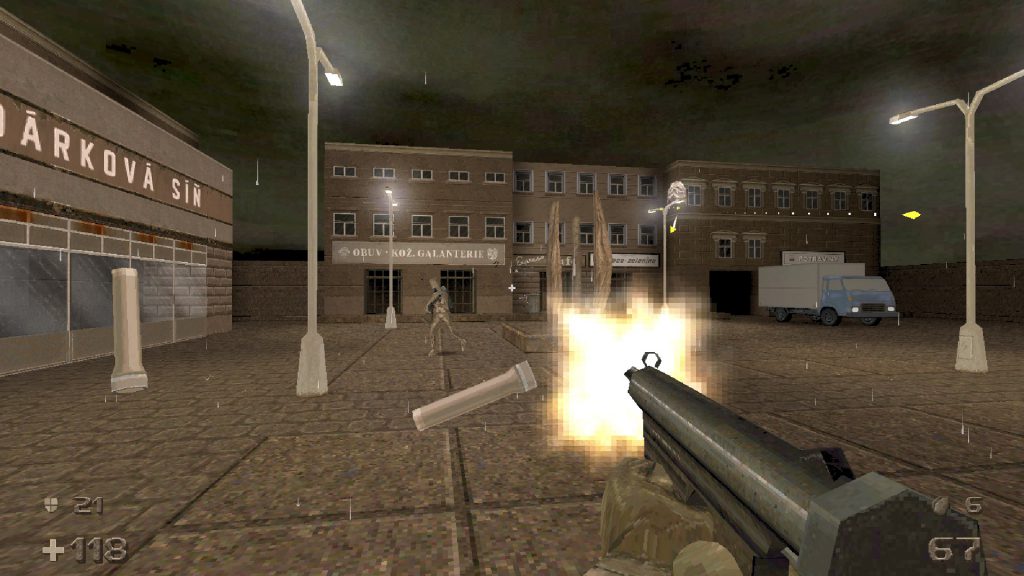 While the underground basements and sewers are a strong reminder of Quake’s abstract mazes, the content of the rooms and the surface bring us closer to Build engine games such as Blood, with more realistic locations rendered in a minimalistic form. In HROT, you can visit Prague’s metro stations, buildings, shops, and even toilets.

Unlike Wolfenstein 3D clones, here the 3D engine is put to good use to offer some verticality and enemies coming from different directions (when they are not hiding behind a corner to ambush the player). While most enemies are dispatched during exploration, there are occasional arena fights with up to a dozen threats to face at the same time, allowing for frenetic gunfights to take place. Each level is bite-sized with a perfect length of 10-20 minutes, unlike Wrath’s gigantic environments that overstayed their welcome. There are your good old locked doors with keys to find in small levels that loop around themselves, offering the classic approach of 90s FPS games.

However, this was not always well mastered and the first level made me very skeptical: I had trouble figuring out an environmental puzzle (shooting an electric panel slightly above and behind me), even though the game was going out of its way to tell me with a text in the middle of the screen that there was something to do. Having to resort to spelling it out for the player shows that the developer is aware that the in-game visual cues are not enough by themselves, and I hope that this will be corrected in favor of a more subtle approach that teaches this essential trick in a more obvious manner but without requiring text. Anyway, during that first level, before figuring out that I had to shoot an electric panel, I kept looking for an alternate exit and often lost my way because everything looked the same in this disorienting maze. Thankfully, all the levels after this one were much better designed, and I had no major complaints. Perhaps a criticism that could be alleviated at the game is that the level design feels very safe and doesn’t leave an impression on the player, but this is only the first episode so we will have to see what comes next as the developer gains experience and departs from the well-trodden grounds. By the way, Spytihněv is always listening to feedback and is quick to improve the game. Keep up the good work! 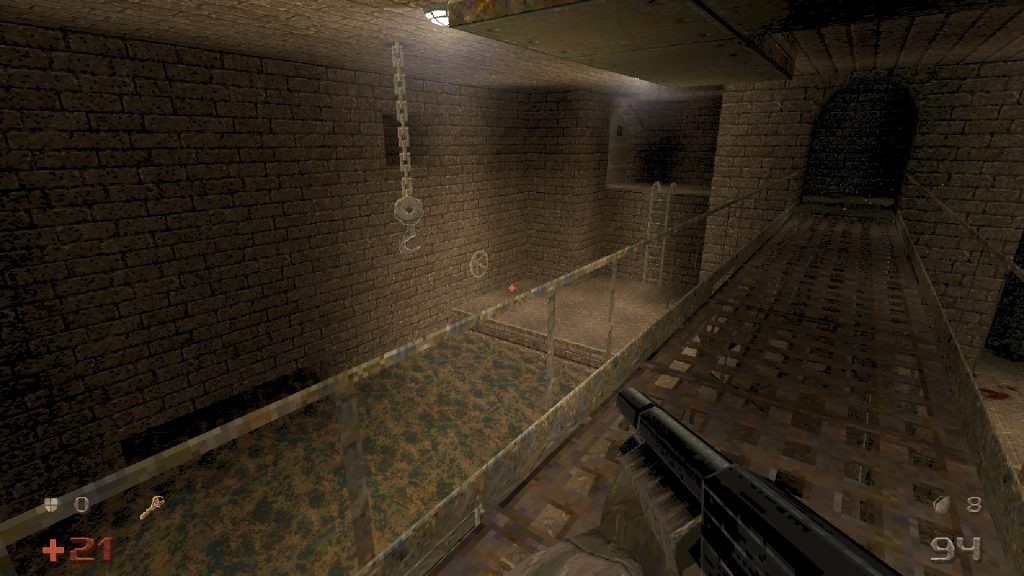 The soviet-era gigantic sculptures to the glory of communism, brutalist buildings with typical names such as the “Palace of Culture”, and the Quake-like world constituted of bleak low-poly and low-res textures are a marriage made in heaven. These recognizable elements (contrary to a purely abstract game) work in HROT’s favor and contribute to the game forging its own identity.

The ambient music is appropriately foreboding and brilliantly adds to the atmosphere. However, I felt that the levels are simply populated with enemies and are too light on horror elements suggested by the appearance of said enemies. Furthermore, id Software’s games are famous for the tension generated by the sounds emitted by its idle monsters behind locked doors, waiting for the player to discover them; HROT would have benefited from more work in that department as well. 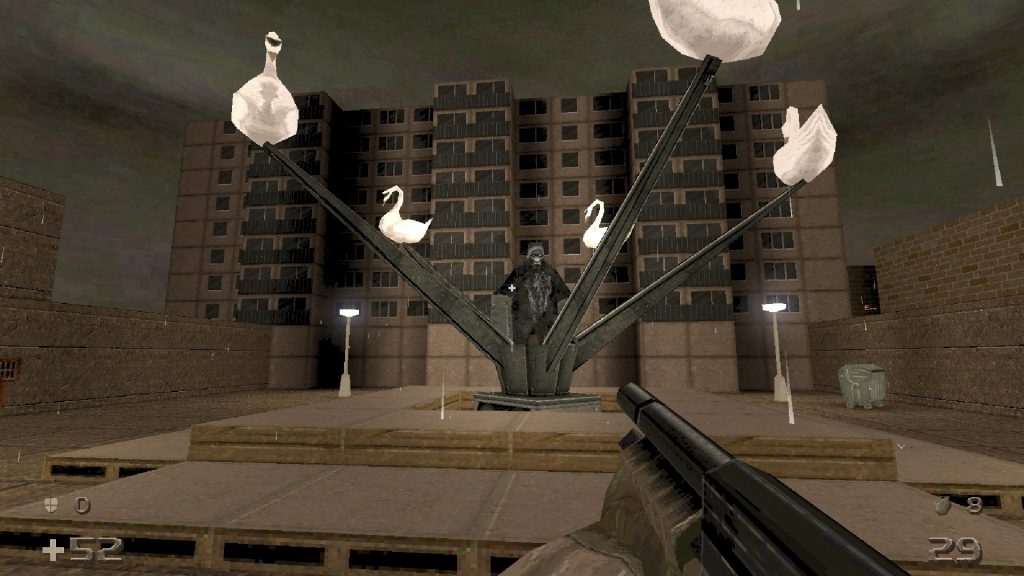 HROT borrows many archetypes from Quake; I already mentioned Ogres, Dogs, and basic Grunts, but there are also the aerial menaces equivalent to the Scrag, providing a well-balanced main force to fight. The only glaring omission is something like DOOM‘s Pinky Demon to focus on melee and corner the player while being less of a pest than dogs. HROT quickly builds on top of this formula by adding its own enemies, such as the Hazmat shotgunners that take a lot of punishment and can scare the player by going back on their feet, or the crazy large horses wearing a gas mask with their unpredictable movements and high jumps. That enemy is so impressive and unsettling upon meeting them the first time, that I think that it will quickly be an emblematic beast elevated to legendary status; they are nightmare fuel. Occasional helicopters or teleporting machine gunners can quickly raise the threat level of an assault. There are several boss fights or weird encounters with crazy monsters, which greatly enhances the uniqueness of playing HROT. HROT’s bestiary is built upon elements from Quake, but it definitely stands out on its own with the excellent character design and lovely 3D models. 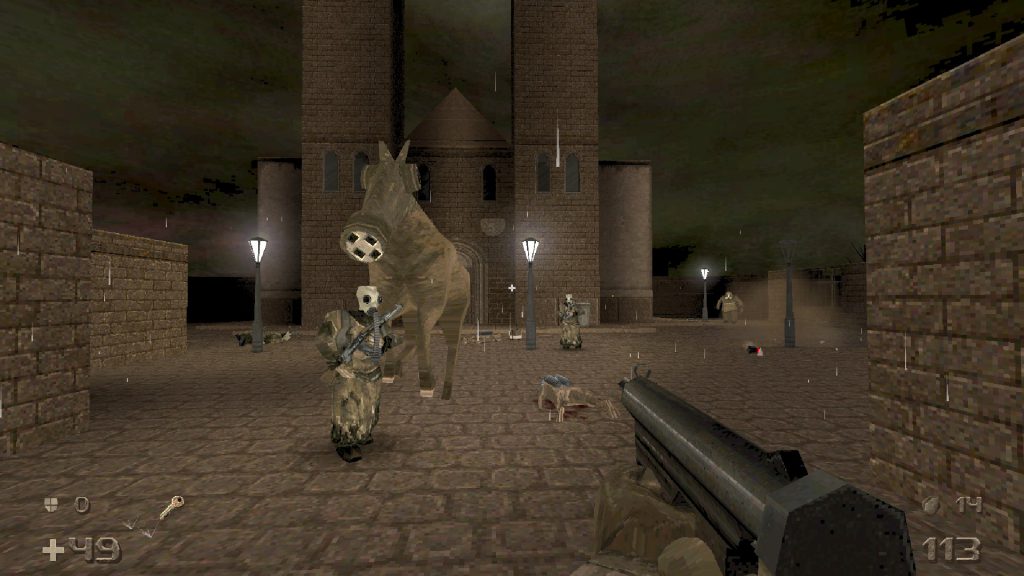 Combat is make or break for a neo-retro FPS, and I am happy to report that HROT does the job. Unlike Quake, rare are the bullet sponges, most enemies can be dispatched fairly quickly and gibbed to blobs of meat (actually, I wish there was more blood, especially after playing Prodeus). The weapons are classic id Software fare, except for one innovation: right mouse click sends a grenade. You will be mostly using the shotgun, which is lethal in close range and is the only weapon with plenty ammo in the levels (ammo and health can sometimes be scarce, but not to the point of harming the experience). However, for now the game lacks something that is effective in mid- to long-ranges. Regardless, the one and only major issue is the sound design of the weapons (except for the rocket launcher). They all sound like airsoft guns rather than terrifying tools of destruction that rip enemies apart. It gives a weird sentiment that the weapons lack feedback, despite them packing a punch and even staggering enemies, which is pretty neat. A small complaint is that there are no crouch and reload buttons; the former is useless but simply contributes to enjoying the first-person controls, while the latter can be detrimental when the machine gun decides to reload at the beginning of a fight. Either have a reload button to leave the player in control, or make sure that none of the weapons need reloading. 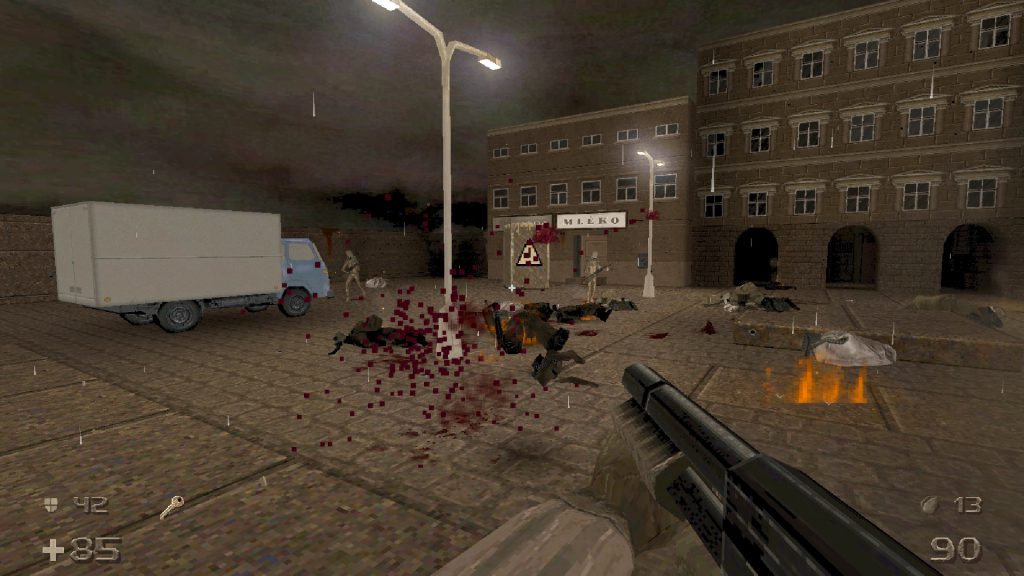 HROT’s first episode can be finished in 2-3 hours, which is a good length. The final adventure might then clock at around 7-10 hours; if that’s the case, I expect that the next episodes will bring at least some variety in terms of the environments visited. The difficulty level seems to only affect the damage dealt to the player, rather than the number of enemies. Most enemies are not dangerous but any hit received counts, as health is scarce; still, you can quick-save and quick-load at your leisure. Once you are done with the campaign, there is an endless mode with waves of enemies. 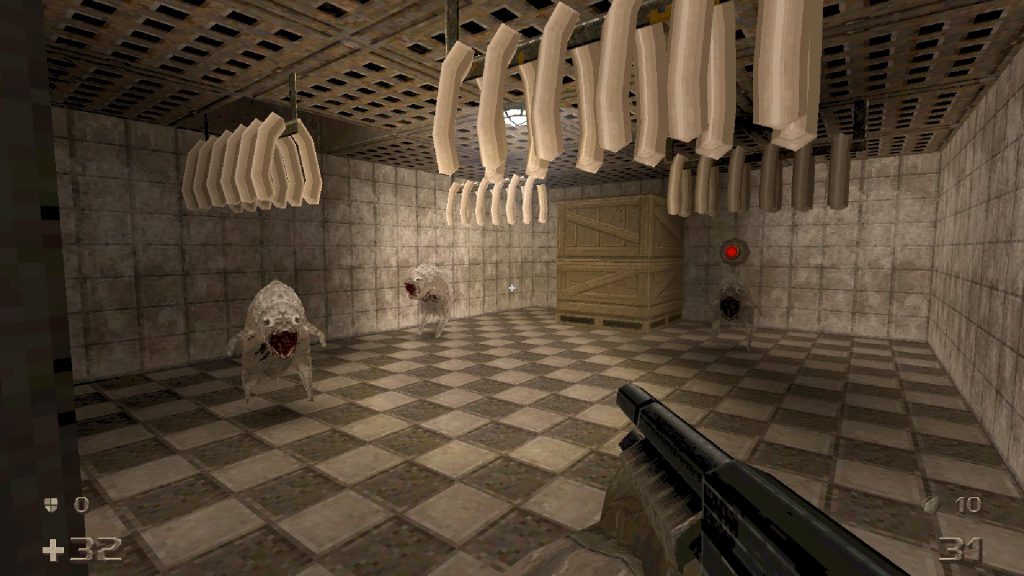 HROT is so faithful to Quake that it could be confused with a mod or an expansion pack. It is almost even closer to the Quake experience than Dusk was, which is both appealing and troubling as HROT offers a nostalgic trip but doesn’t take a step forward with unique new elements that could draw attention to the game in a crowded market. There is nothing new and groundbreaking, and is that bad? To me, absolutely not. HROT does well what it does: propose a Quake-like experience, close enough to feel comfortable and appealing, but with its own unique identity: it keeps the spirit of the “nightmare” from 1996 alive and well, without playing a retread or a boring “more of the same”. The level design is different as it embraces the bleak soviet architecture, and the bestiary is fresh and interesting. Straying too far from the formula risks taking away from what makes these kind of games so simple, elegant and effective. I was very pleased while playing HROT’s first episode and only regretted the weak sound of the weapons.