Taco Amigos is a DLC to the excellent Diner Bros previously reviewed in these columns. If you are new to the concept and curious about what this is all about, here is a quick summary: Diner Bros is a bit like Overcooked, as it is also a 1-4 players party game focused on cooking meals. However, unlike Overcooked, Diner Bros’ main course is a set of permanent restaurants that players gradually upgrade to increase space, unlock recipes and… service new clients. The sense of progression, as well as the quirks of the clients, provide a completely different experience from Overcooked, and we heartily recommend it.

JAYFLGAMES’ previous DLC, Sushi Bros, did not manage to completely seduce us due to the flawed mechanic of fishing that was subject to RNG and very frustrating in a game that requires to be quick or else the patrons leave angrily. Thankfully, Taco Amigos does not suffer from any such issue. This time, the new feature that will be your bane is most likely the bell, ringing to announce rush hour; as soon as an NPC rings it, a bunch of pedestrians runs across your restaurant, getting in the way, and sometimes ordering meals while you were already swamped! I tried to savagely beat that sneaky bell-ringing NPC with my rolling pin, to no avail. What I did not like about this mechanic, is that unlike the joggers in Diner Bros, seeing it happen does not allow to anticipate the meal to serve in order to deal with the situation. The bell only adds to the burden. You can’t try to be smart and avoid purchasing it, as is it a necessary purchase to move on to the next set of upgrades. Still, the inclusion of this bell is not entirely without merits: similar to how Pavlov’s bell triggered dogs to salivate, Taco Amigos’ bell triggered us to swear and brace for impact. 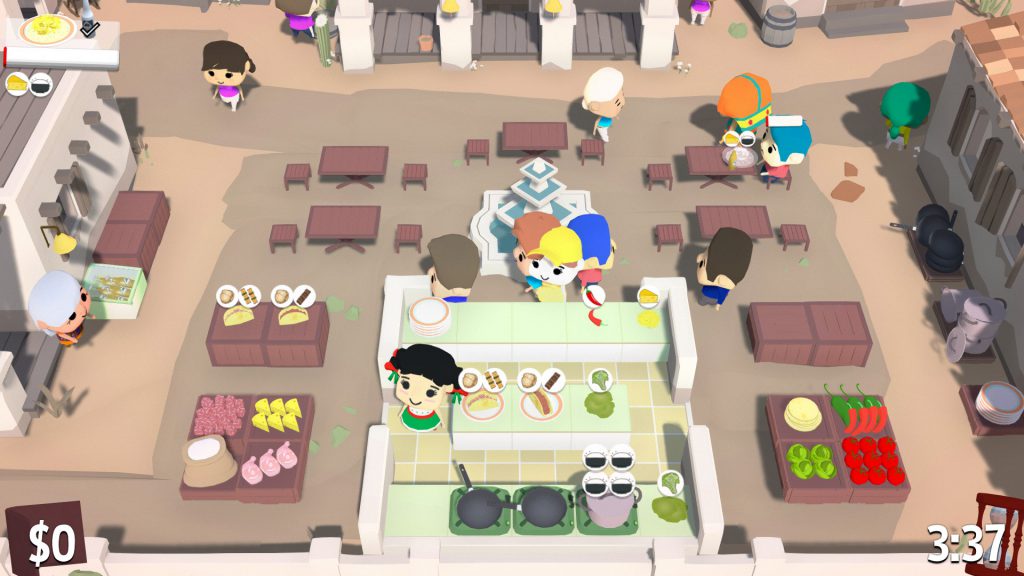 At the end of the day, one of the reasons these kinds of games are appealing is the opportunity to bond or socialize over the game, and features that increase this sentiment work in the game’s favor. Taco Amigos completely nailed it with two new patrons: the Buds forget part of their order quickly after sitting, and the Twins order the same meal but one of the two has blanked ingredients, requiring you to have a look at the similar order to infer what you need to do. These clients force players to remain attentive and communicate, which frequently sparked fun exchanges between us. 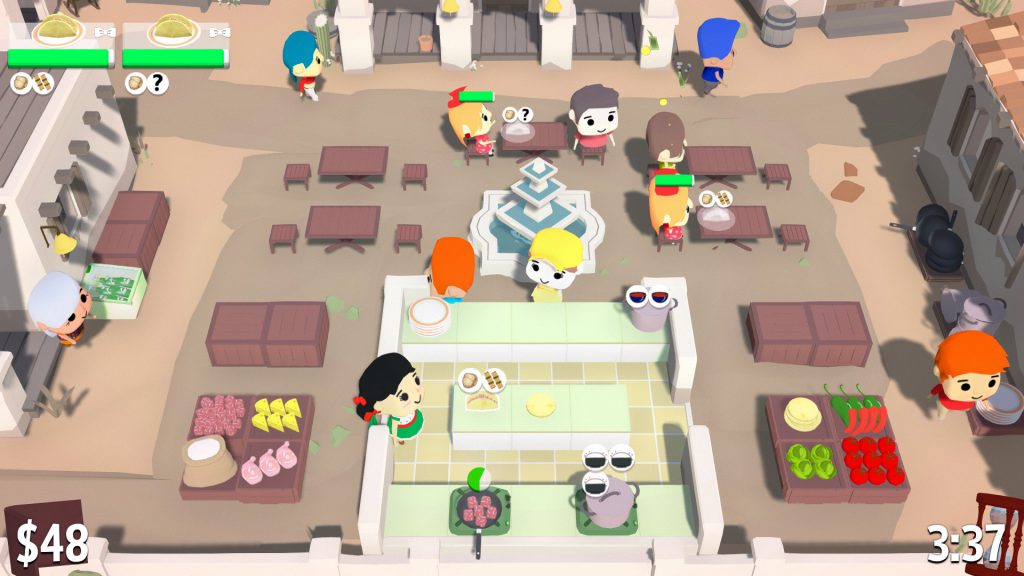 The other patrons are reskins of those encountered in previous restaurants: Luchadors ask for two meals, the Punks try to sneak out without paying, the Muertos steal and mess with the kitchen, and finally, the Mariachi do not sit at the table but request a meal directly in the kitchen, often blocking the way. The more annoying clients can sometimes be overwhelming when a lot is going on, and even on Easy mode we were sometimes forced to prioritize, unable to cater to everyone; if you are not attentive, the situation can quickly fall into chaos. This manages to be challenging and fun, and I would say that overall, this is the best set of customers in any of Diner Bros’ restaurant. Still, I wish that there were more patrons whose needs you can roughly anticipate as they walk in, such as with the joggers ordering a salad. 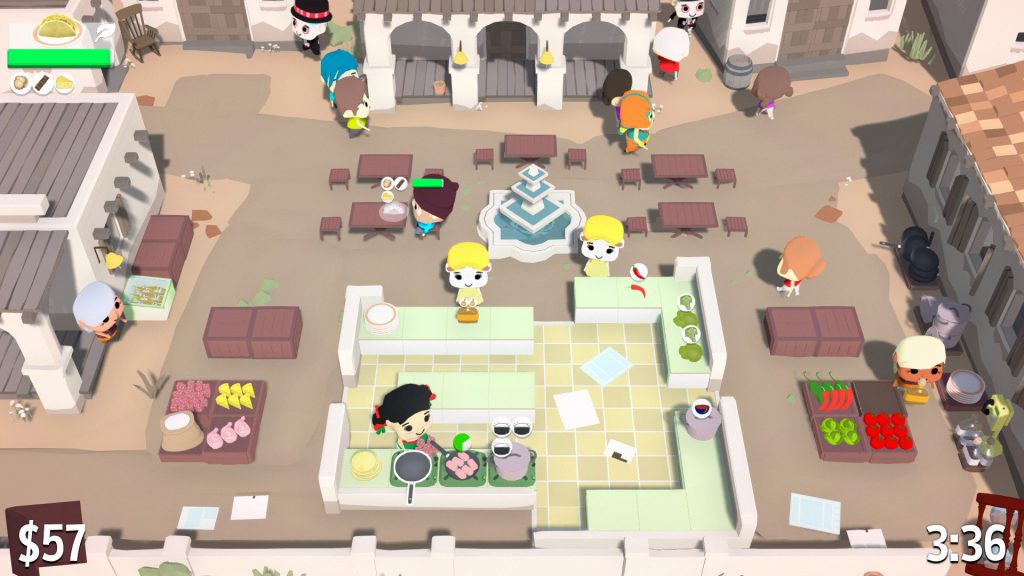 In terms of meals to serve, there are the titular Tacos, and Burritos, although I am not able to tell the difference and simply follow the recipe: chicken or beef, cheese or vegetables, sometimes rice and sometimes salsa sauce. The beans and rice follow the unsanitary breakthroughs of Sushi Bros, as you need to borrow water directly from the ornamental fountain instead of the tap (I really love this, mixing level and game design in a fun way). Tequila can be ordered on the phone. The level of complexity steadily increases as you upgrade the restaurant, and I regretted that these ingredients were combined a little too much rather than split into signature categories (in the free DLC Pizza Bros, fries and pizzas were completely different endeavors). Nonetheless, the different ingredients add up smoothly in the kitchen: pans to fry the meat, pots to cook rice and leave it sitting as long as you want, and pots to mix the salsa sauce but no need to heat it, so you can leave it on the bench. 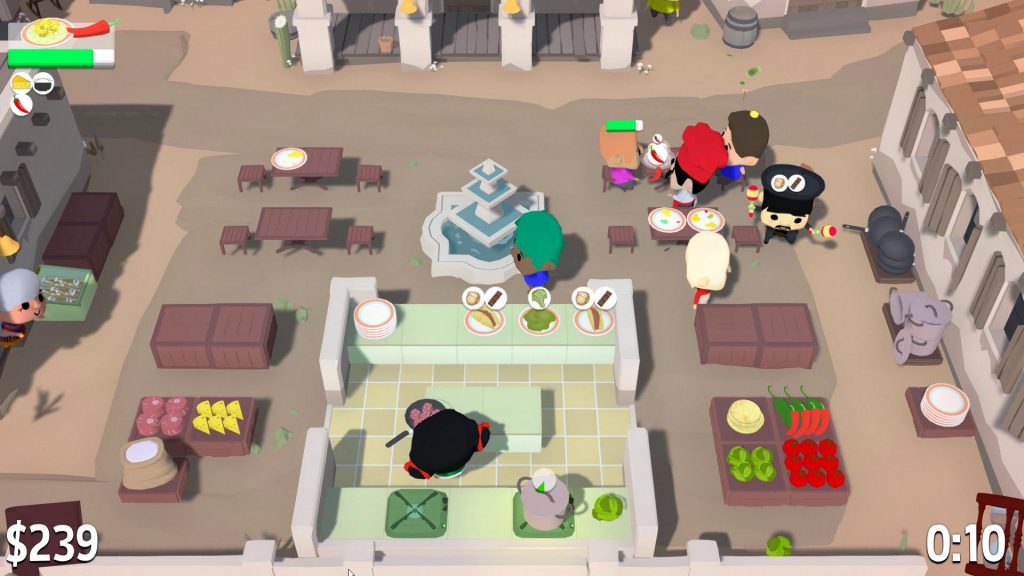 The kitchen itself was increasingly nice to use, and by the end of the campaign, it was perfectly functional with little to no frustration. A bonus to the quality-of-life improvements in the Taco Amigos kitchen was the possibility to hire someone to chop the meat; I don’t mean to chop it each and every time you that need it, but rather to come and chop the entire storage stock so that there is no longer need to chop for the rest of the day… sweet! In single-player, two waiters can be hired to let you focus on the kitchen. You definitely feel the progression of your character and your restaurant, with increased quality-of-life features to match the increased complexity of the meals. 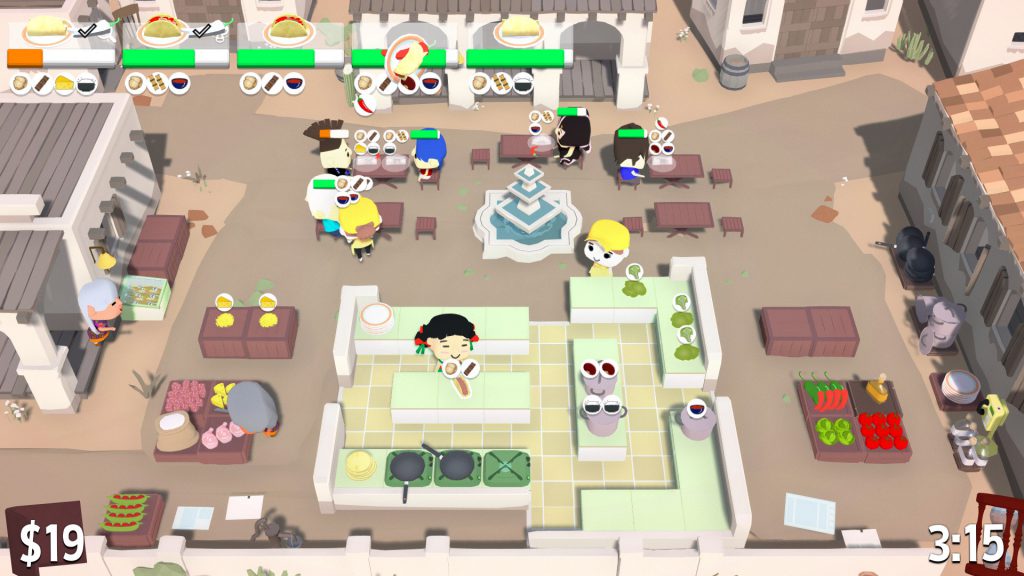 Tacos Amigos is a solid DLC that in practice almost acts as a “best of” compilation of all Diner Bros so far. It features all the regular types of patrons, as well as those with “forgotten ingredients” that require being attentive and to communicate. I only regret that all patrons order more or less the same mix and match of all ingredients available, but this regret pales in comparison to the fun we had in this kitchen. If you wanted to spend a few more hours with the Diner Bros formula, you can’t go wrong with Taco Amigos.