Have your own restaurant in which you can play Overcooked as an adventure rather than a series of minigames!

Overcooked is a staple of local multi-player games. It managed to turn a subject matter completely unrelated to fighting and violence (cooking) into a must-have for everyone, hardcore gamers and casual gamers alike. Everyone? Well, JAYFLGAMES enjoyed playing Overcooked but noticed that it can be very difficult for casual gamers to progress. To unlock new levels in Overcooked, players have to pass the previous one with some stars which require both a strong strategy planned by the players, as well as good motor coordination from everyone in order to execute the plan. This means that, for some players, there is a glass ceiling that they cannot break in order to enjoy the rest of the game. JAYFLGAMES decided to rectify that and make a game with a more permissive structure, while still keeping the core gameplay ingredients that worked so well in Overcooked.

Diner Bros starts with the same idea of cooking meals as in Overcooked, but it brings the concept to an entirely new direction. While you can find a similar experience (albeit less fancy) in a Challenge mode, the rest is an entirely different endeavor. It’s not a shameless copy, the two games can keep on living alongside, completing each other, and not replacing each other. The major difference is that the players are not teleported from kitchen to kitchen, but instead, they own an entire restaurant that is gradually improved with permanent progression. New ingredients are progressively purchased and added to the kitchen, and the restaurant can be upgraded to grow in size. This completely changes the dynamics of the game, as it becomes less interesting to pick it up during a party for just a few moments. Instead, it is more geared towards regular sessions with your partner. This is the perfect… couple game.

Edit: Since this review was initially written, Diner Bros received regular updates and is now boasting a lot of new content that more than doubled its initial release. This review has been updated to reflect this, although not everything has been explored in-depth. 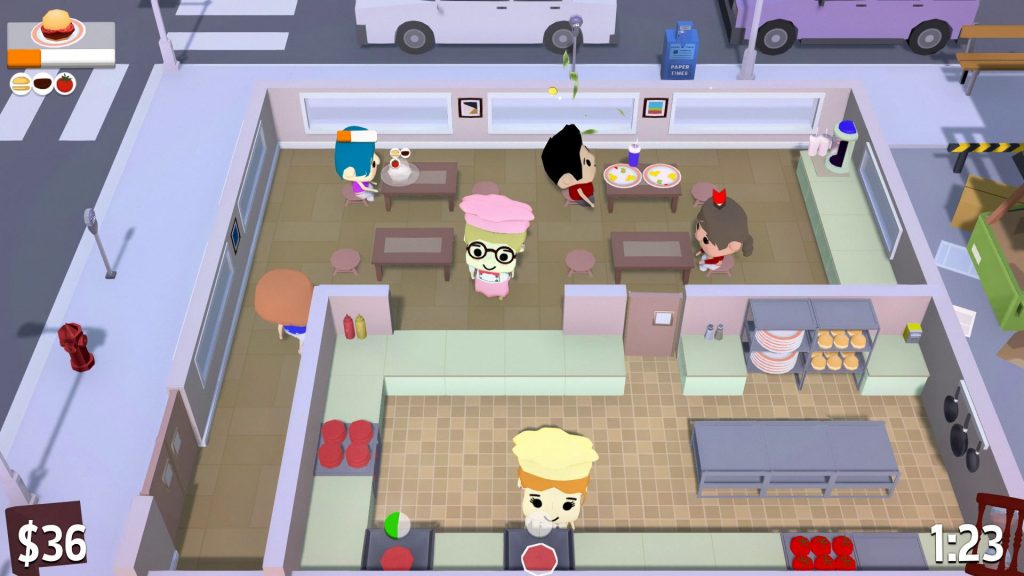 We naturally organized ourselves to have someone skilled in the kitchen and someone less skilled taking orders and bringing meals to the patrons. Yes, unlike Overcooked the restaurant part is functional and active; it is very satisfying to have to interact with clients. This is another point of brilliance for Diner Bros, as there are many different types of customers. 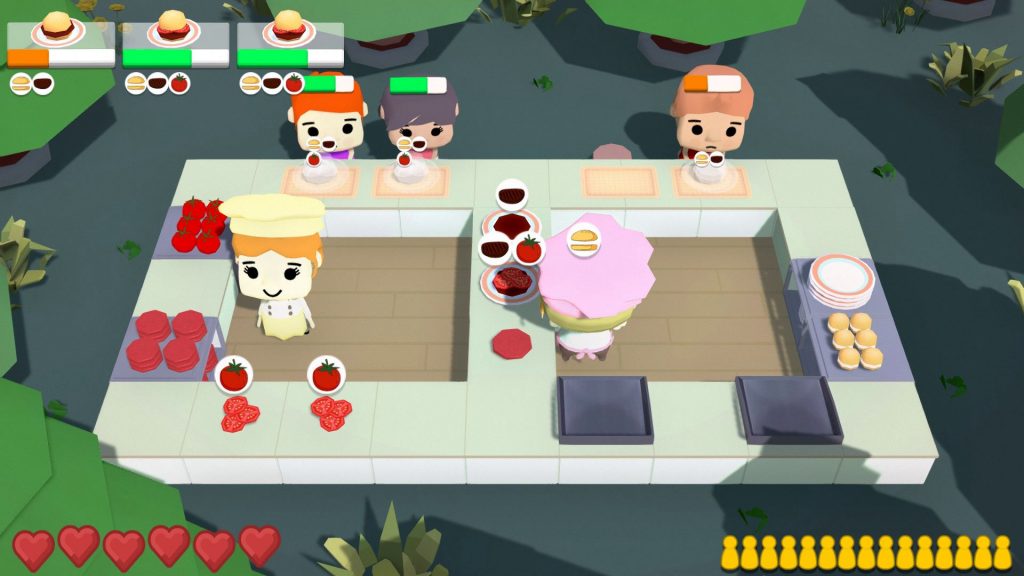 Special customers and their needs

The construction workers will ask for seconds, the critic will occasionally pop in to be served like a king, and those hateful joggers will pop in and out of the restaurant so quickly that serving them becomes a top priority… and it can be the downfall of an otherwise well-oiled machinery. Imagine the situation as everyone is busy with their own task, and one of the players suddenly screams “A jogger is coming! Quick, prepare a salad!” “But I am just finishing a burger for someone who is already angry for waiting too long…” “Later! Quick, we need a salad first!” If the players take too long and the waiting bar of the patrons is depleted, they angrily leave the restaurant without paying. Learning about new patrons and their quirks is a blast, this made the whole experience very colorful and often hilarious. 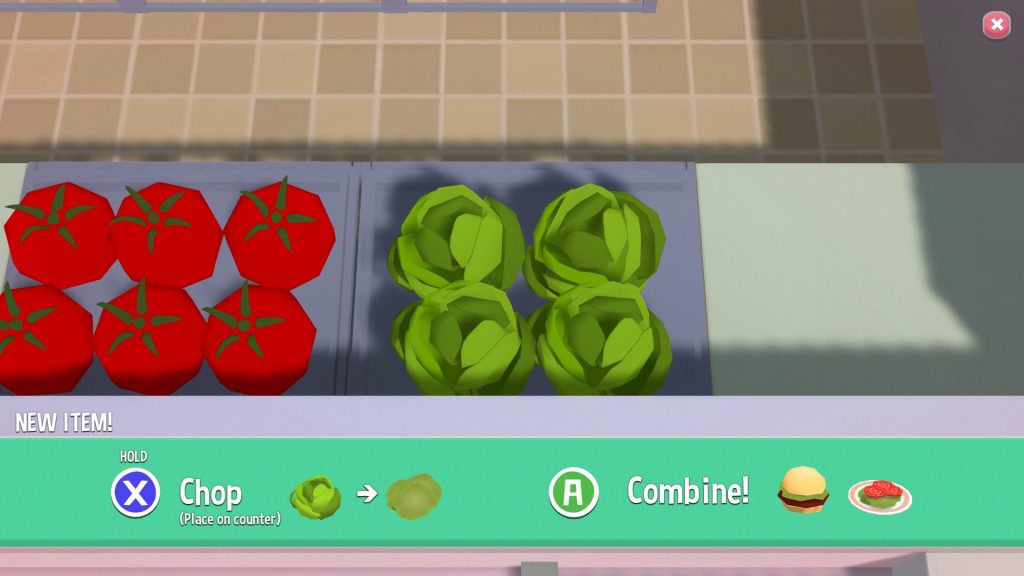 Don’t be afraid of failure

When patrons leave, it does not mean that the day was completely lost and the players need to start over. The game moves on to the next day of work and that’s it, there is no punishment. It just means that some money that could have been earned was not received and that this day might not be successfully counted towards a secondary objective. Secondary objectives such as a specific number of days with 4/5 or 5/5 stars are necessary to improve the restaurant, but it does not matter if it takes five days or a hundred days to complete them. Their conditions are often cleared just by playing, or by focusing on a single type of customer and dropping the rest, which removes the glass ceiling that Overcooked had while still pushing the players to play as well as possible. To be entertaining, games need to walk a fine line between challenging and accessible. Too easy and it becomes boring, too hard and most people won’t be able to make progress and grow frustrated. By default, Diner Bros‘s campaign gradually becomes more hectic as players buy new recipes, along with new drinks and ice creams. If fulfilling every wish of your customers becomes too stressful, you can always tick the “easy mode” check-mark next to your save slot. That should teach a little bit of patience to the joggers! 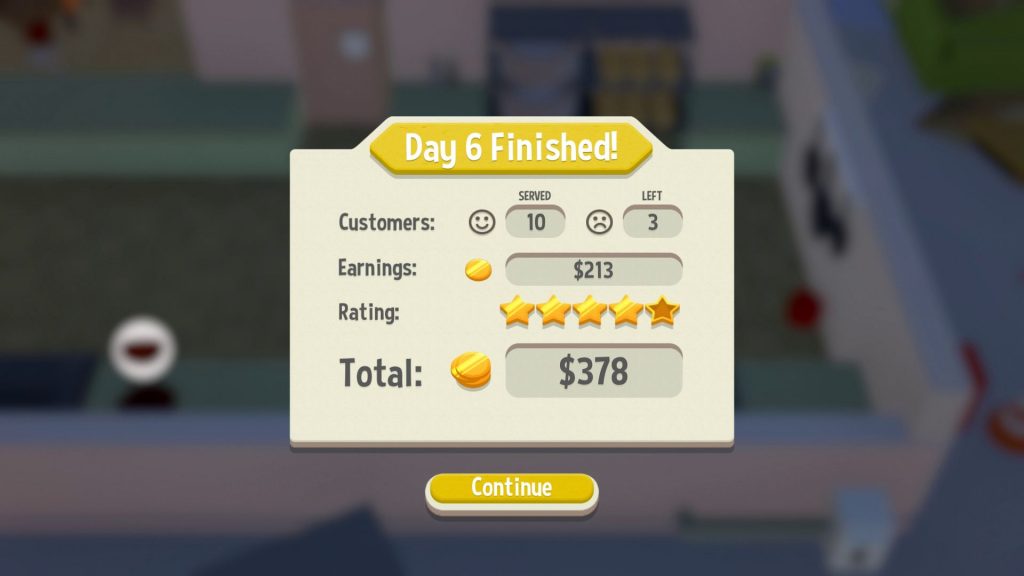 Single-player is actually possible and it works just fine. A large portion of the challenges can be played alone. When it comes to the campaign, orders are automatically taken and it is not necessary to clean the tables. After a few days, it is subsequently possible to hire a waiter who will deliver the drinks and the meals so that the lone player can focus all their efforts on cooking. Perfect! (Although beware if your partner learns that you resorted to hiring help, they might feel cheated) Since there are 3 save slots, it is possible to have a save file to play as a couple, a save file to play alone, and a save file to occasionally play with friends.

As a nitpick, I wish that the waiter would also deliver ice creams as the game became really difficult after buying this new recipe, but as I mentioned before it’s possible to switch to easy mode to decrease the frequency of this particular order. Likewise, it would be sweet if the waiter could be switched ON or OFF for multi-player as well, either to alleviate the role of a struggling player or to allow everyone to work together in the kitchen. 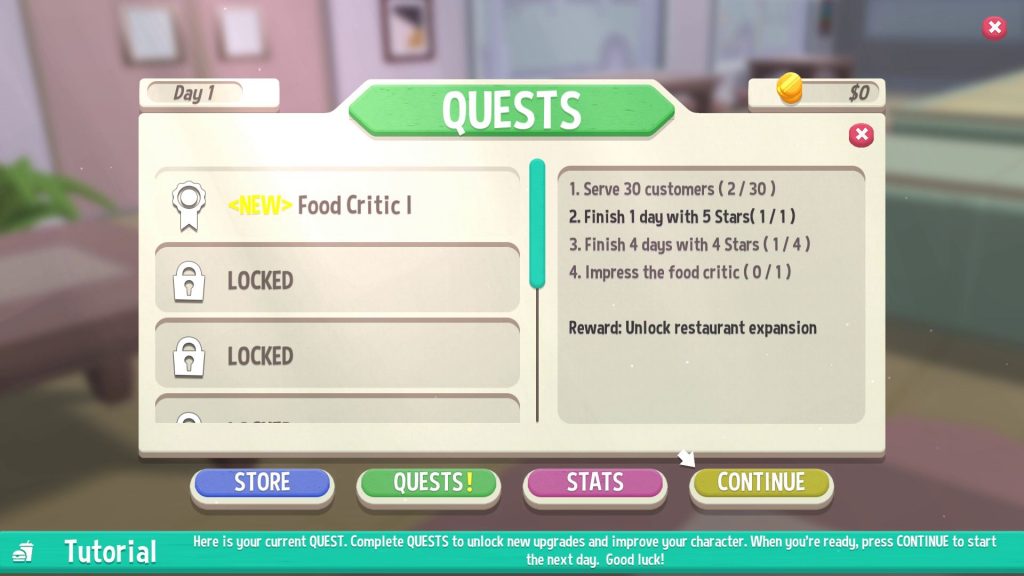 Since the day of release, a lot has been added to the game. I already mentioned the challenges, they have seen numerous new arrivals. What surprised us the most was an entirely new restaurant, the pizza place! It brought new recipes, as well as new types of customers. Cheers to JAYFLGAMES! On top of that, there are endless modes, including a Zombie survival mode in which you have to feed the relentless horde. 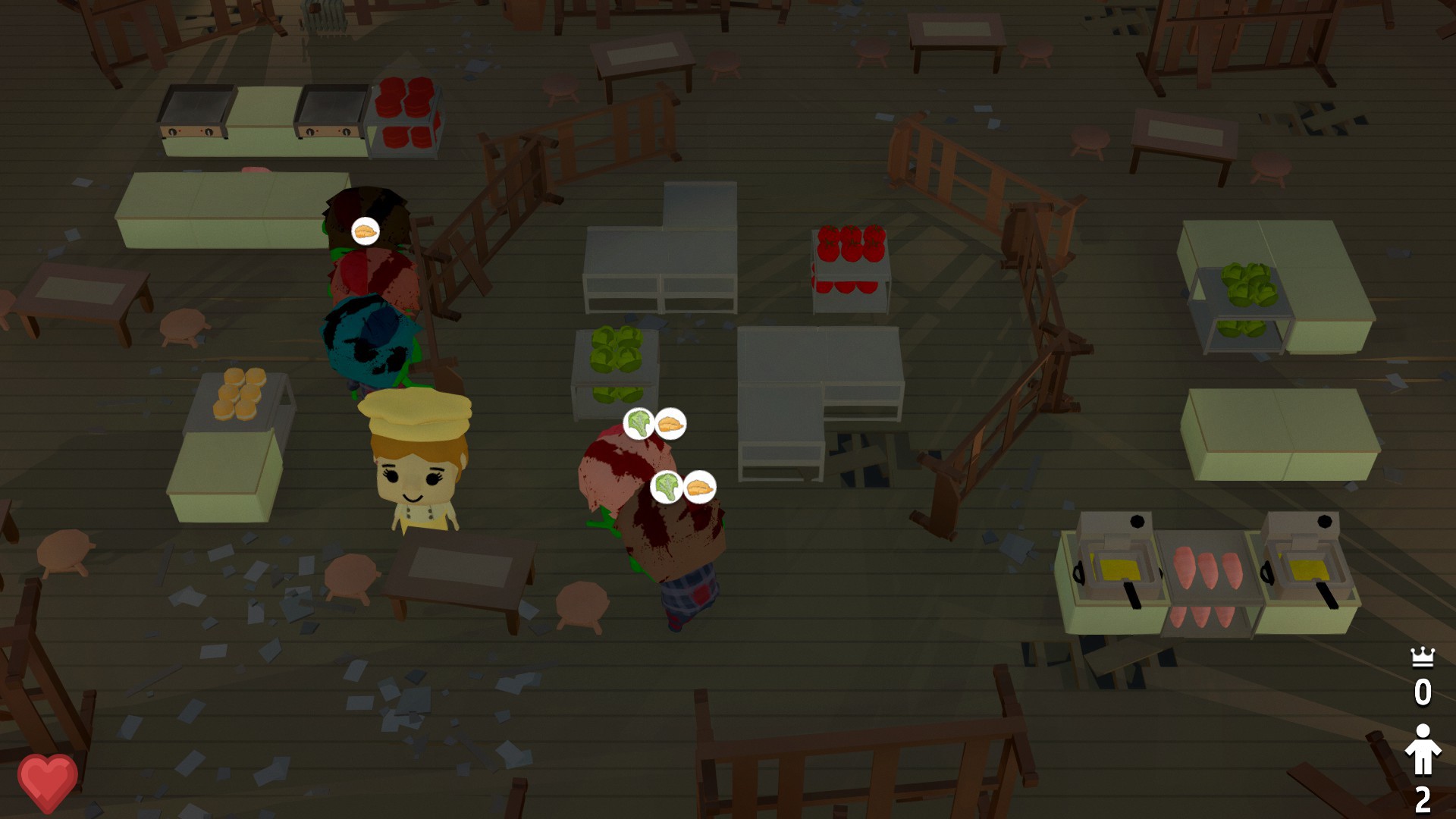 There is no online multiplayer, this game is local only, up to four players. On release I had minor framerate issues when playing on a second monitor, but it seems to be gone now. I am not very charmed by the art style, the puffy player characters lack character and seem a bit bland. I also really don’t like the name of the game, the word “bro” is dumb and has been overused already. It’s also not really fitting the spirit of the content. Finally, it would have been nice to have a bit more freedom on how to decorate the restaurant or its layout. 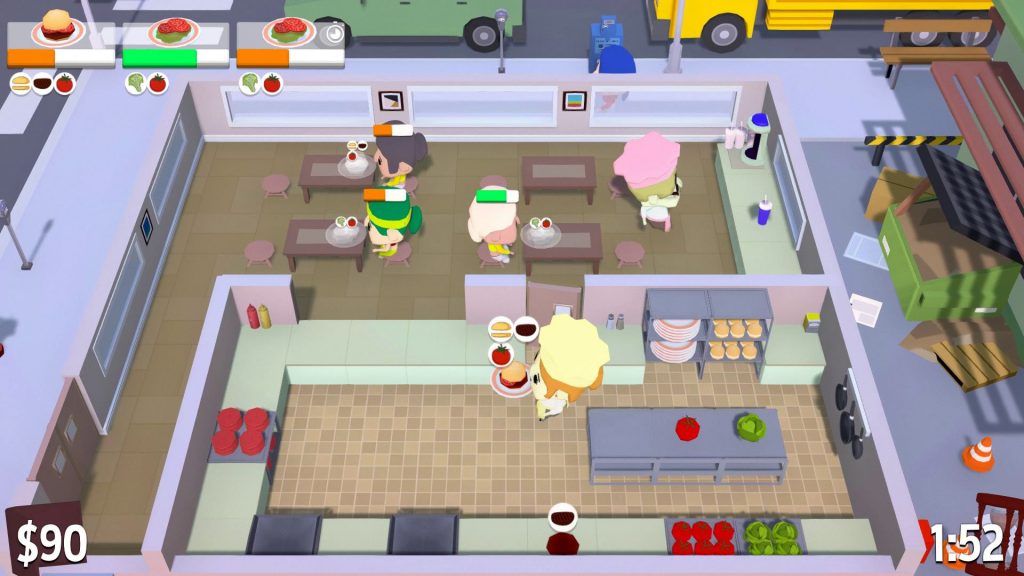 Diner Bros is a really nice spin on Overcooked, expanding the concept towards a permanent restaurant rather than a series of mini-games. This game is perfect for regular sessions of play with someone close, whatever their gaming proficiency is – or all alone, as the single-player mode is well done. Special customers add a very fun layer to the game, both in terms of gameplay, as well as in terms of enhancing the social aspect of interacting between fellow players. Additionally, since the game is rather cheap relative to your average new indie release, I can’t help but recommend it wholeheartedly. It is actually worth more than the admission price! Since its release, the developer added a lot of content: new recipes, new restaurant, new customers! All it would need to become perfect would be an online mode, let’s hope to see that in a sequel.