Diner Bros (read our glowing Save or Quit review) is a party game about managing a restaurant. Yes, like Overcooked, except that there is a permanent restaurant to upgrade, recipes to buy, and customers to serve. Similar feel, different experience. While Diner Bros was a bit light on content on release, developer JAYFLGAMES more than doubled the content with free updates, even adding a new campaign and new recipes in a Pizzeria, making the title an absolute must-have for couples. Now that yet another campaign has been added to the game, it’s only fair for the developer to make it a paid DLC. Sushi Bros also brings a new split-screen versus mode to Diner Bros, except that it is free and also included in the base game, no need to buy the DLC to compete with your friends. Nice! Let’s see what the DLC adds and whether it is worth the purchase.

As the name implies, Sushi Bros tasks up to four players to manage a Japanese restaurant, and not a very clean one! The kitchen is basically a few stacked boxes on a pier, and the cooks use a nearby river’s water for everything. Is there a fish swimming in your teacup? Entirely normal, sorry, no refunds. At least you can be certain that the fish in your sushi have been freshly cooked, as they are pulled directly from the river. Is there a chemical plant pouring their waste in the river as well? Well, we certainly hope not! Please come again! Oops, a cook dropped a pot in the river? No matter, we can find another one by searching the garbage from a street nearby. 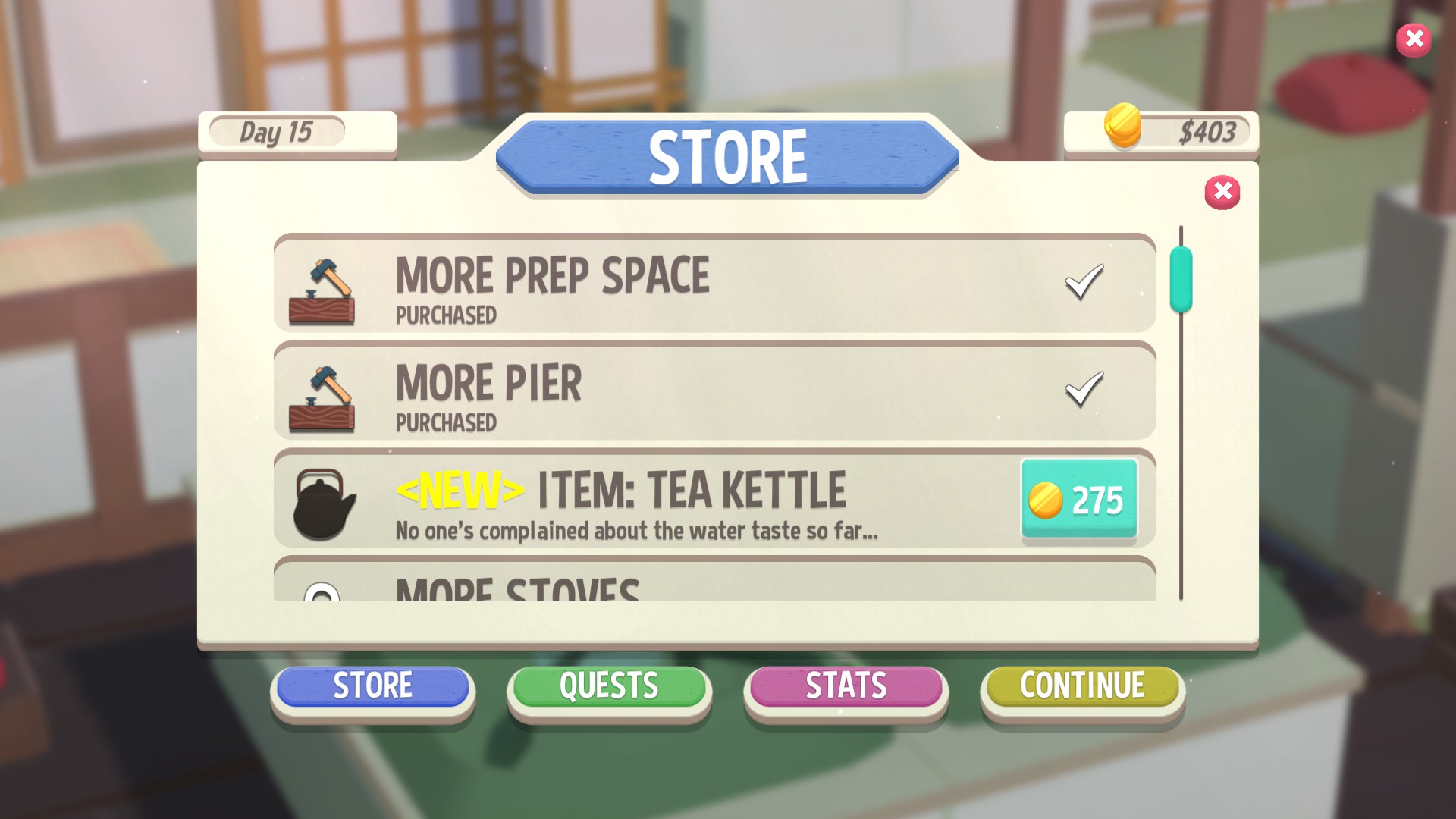 I hope never to eat in the sort of establishment that I have been managing!

Jokes aside, the river does actually provide a lot of ingredients, which is both brilliant and incredibly annoying. It’s brilliant as it adds a lot of fun to the game, and it’s “smart” to have it be the source of water and fish. It’s also incredibly annoying as you have to actually catch the fish. Not only is it difficult to catch a fish with it being slippery, but it can also jump back into the river if you didn’t completely cut it into small pieces. Wait, that’s not all! The worst part is that you later “upgrade” the river to hold three types of fish and they only randomly show up. Your patrons also randomly require a specific type of fish, and it is incredibly frustrating when the client is getting impatient and leaves because the specific type of fish that you were looking for didn’t spawn during the brief window of time that you had for fishing. Or maybe it did spawn, and you missed the fish because you were running another errand, or because the fishing rod is difficult to use. Add to this that you don’t have much space on your pier to store a comfortable stash of fish, and it can really become a nightmare. One time, we received four orders of the same fish at the same time, and we went into full panic mode. Thankfully, once Yakitori skewers are purchased patrons order fish less frequently, but a nightmare situation can still spring on you. By the way, there is also a fun delivery method for the Yakitori, as you need to order chicken or beef on the phone and then you can see a delivery guy come along and drop it. 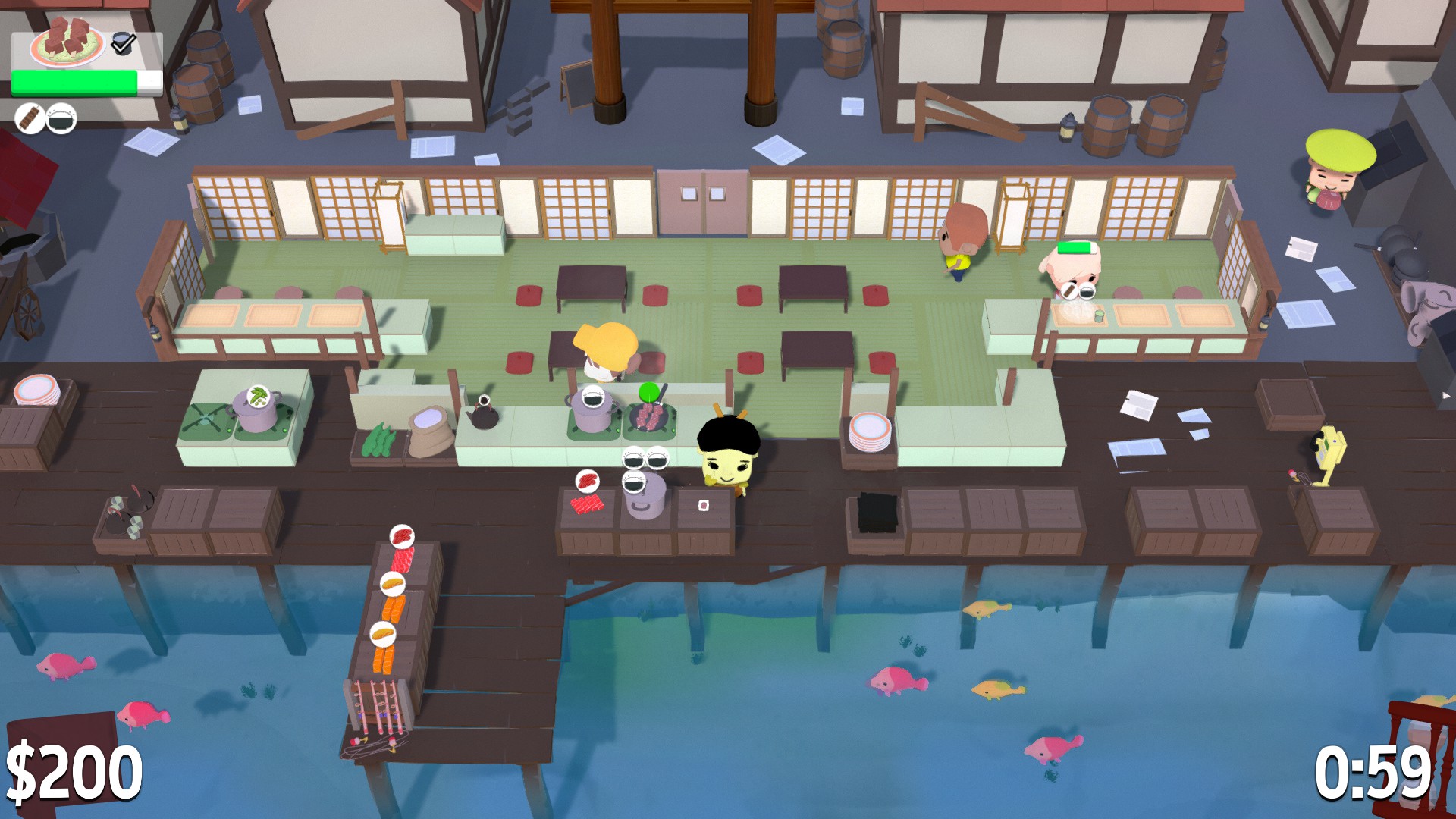 There are other little annoyances. I already mentioned that there isn’t enough space on the pier to store a lot of things, and there also aren’t enough tiles to position finished meals in front of the waiters. It’s already not much in multi-player, but it’s made even worse in single-player as there is a very small number of active tiles that the AI will use, while you have to give them a ton of items. It’s possible to buy new space in the restaurant, but it appears on the other side, near the entrance wall rather than near the kitchen. Basically useless. “Soy” sauces have to be sent individually rather than combined with the plate, and then there are two kinds of Sake. Cooking alone with AI helpers or with a human waiter, I often felt overwhelmed. Thankfully, there is an easy mode, but it still felt very difficult having to manage fishing, cooking and sorting ingredients within the small space available. 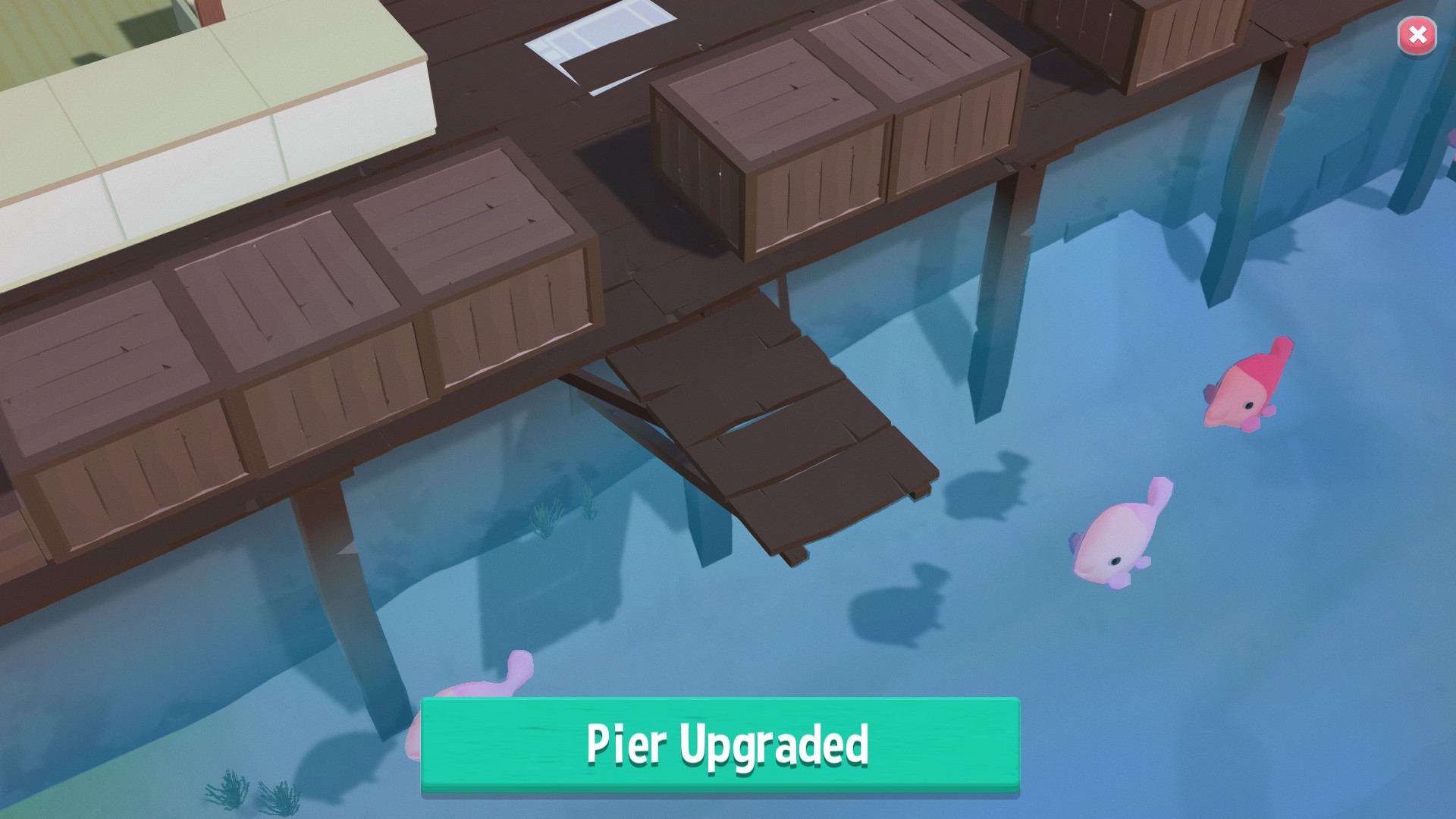 Due to the small space with lots of ingredients concentrated in one tight place along with the many twists and turns on the pier and the precision and speed required for fishing, it actually emphasizes the shortcomings of these types of games as what was somewhat tolerable in Diner Bros becomes a real problem. When I mention the shortcomings of these types of games, I am referring to the difficulty in aiming correctly at the right tile. Overcooked! 2 added some sort of indicator, but it still can be difficult to align the character with the right tile, especially in the middle of the action. Diner/Sushi Bros doesn’t make this any easier, as the river seems to take a toll on the graphics engine, and we suffered many framerate drops, especially when mirroring the screen on a second monitor. During these moments we would sometimes miss a fish and shout in anger. The music is not a good fit with an Asian theme. There are also some bugs here and there, such as the AI waiter that one day refused to serve any more patrons after one customer left before I had time to cook his meal. Also, the AI waiters do not acknowledge one type of customers, the ones with a mask, Mr. Kabuki. It made my life even harder in the kitchen, as not only did I have to do the service myself, but also these characters only intermittently display what they want, and it’s easy to miss while being busy elsewhere. 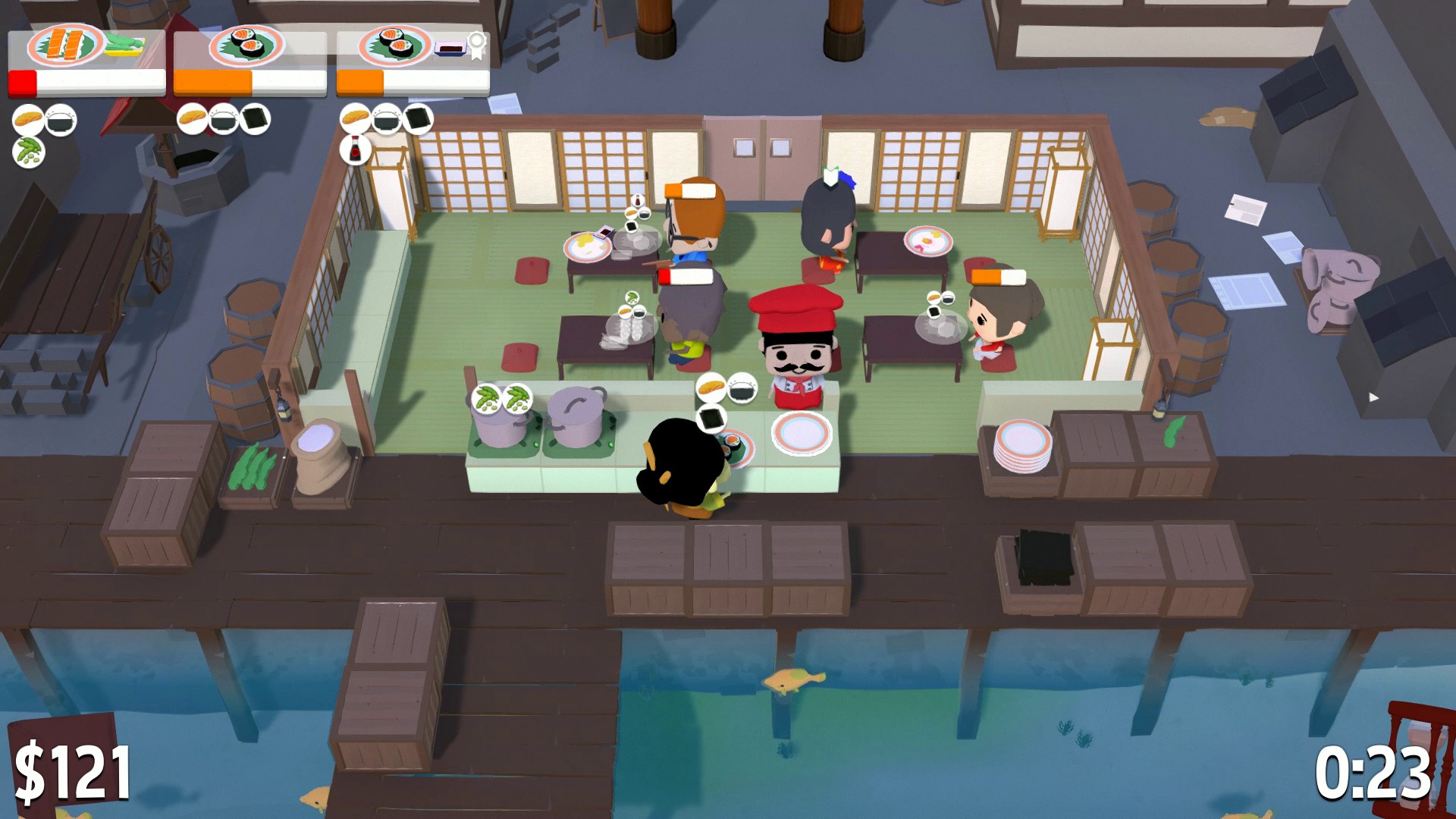 The characters in Sushi Bros are a mix of old and new: Sumo wrestlers require two meals just like the factory Workers from the previous restaurants. Young Punks are exactly like Punks. Ninjas are like Thieves, except that they can be invisible! Princess Hime (Princess Princess? Hime means Princess in Japanese) is new. She says a cute “Domo” when she orders, but then she starts crying if she doesn’t get served fast enough. And as I mentioned earlier, there are also the Mr. Kabuki with a mask: they start singing in the restaurant, which bothers other patrons and diminishes their patience. While we didn’t mind seeing some old customer types again, we regretted that they basically all ordered anything on the menu. In other restaurants, some characters would order specific meals and it was fun trying to guess what they were going to ask (the Joggers ordered several types of salads, never burgers or pizzas). 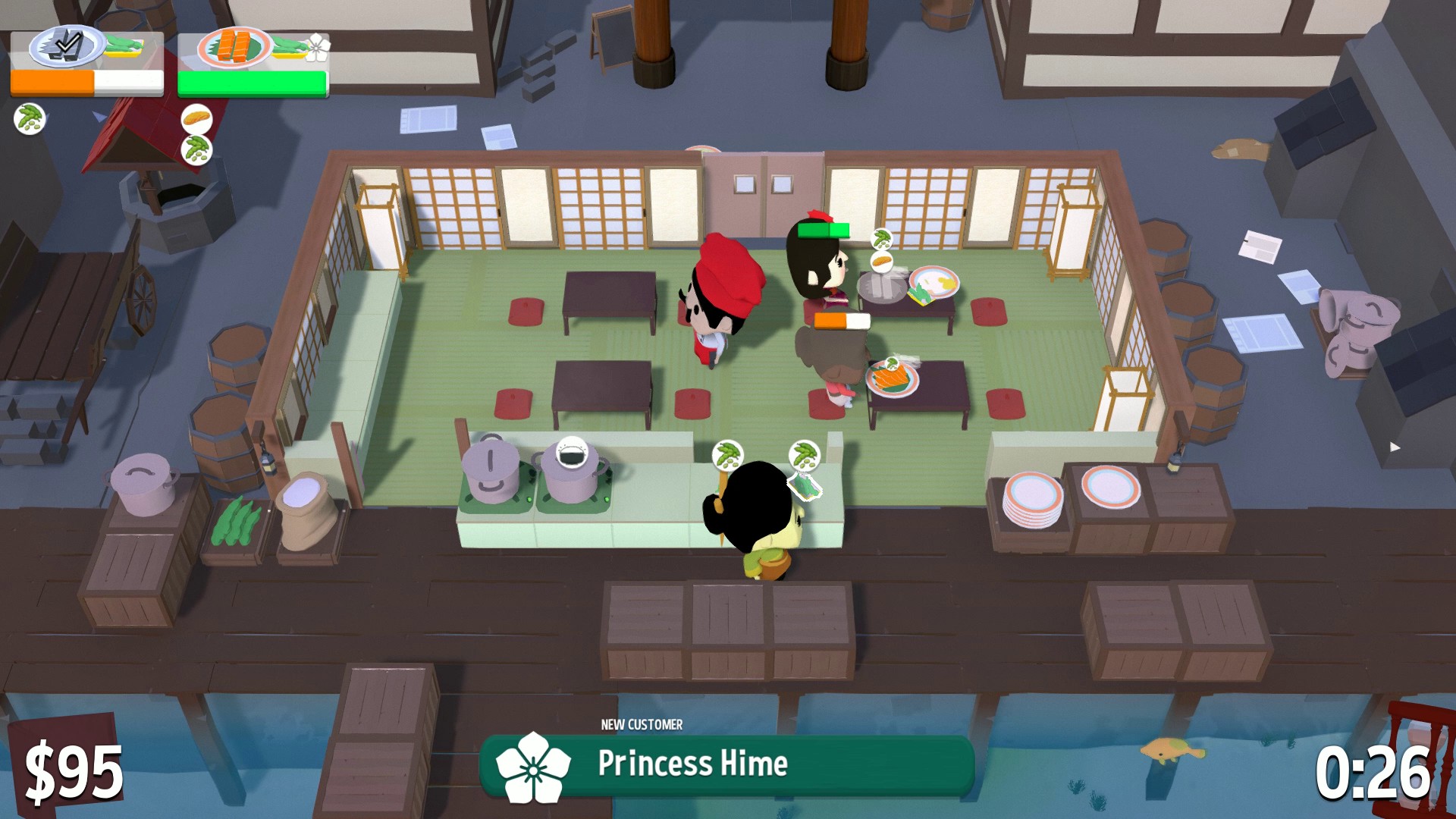 Sushi Bros is full of humor and the river makes for a very interesting experience, smoothly combining fishing, cooking, and serving. All the new things to do make this new Japanese restaurant clearly feel fresh and different from the previous two. However, fishing several types of fish adds too much randomness to what should be a well-oiled machine. The layout of the place does not feel very comfortable to play in, and the requirement for faster-paced action brings Diner Bros’ smaller issues to the forefront, where they do not seem so small anymore. As such, this DLC is less enjoyable than the brilliant base game, and I would only recommend it if you absolutely need to play more of Diner Bros and if you are prepared for a more difficult and frustrating restaurant (or if you want to reward JAYFLGAMES for their continued support of Diner Bros). As it stands, I hope that Sushi Bros sees some more polish: it feels half-baked. It’s still delicious, but this time only half-delicious.