Manage your secret spy organization and uncover the conspiracy in this Cold War era tactical RPG.

At first glance, you’ll probably notice straight away that this game has a lot of similarities to XCOM. And in many ways it does play very similarly to XCOM – the isometric style combat scenarios, the same type of cover system, the same style of managing your organization outside of combat. However, Phantom Doctrine also offers a lot of its own mechanics to make it feel fresh and different to the XCOM series. In this review I will break down each of these mechanics.

At the start we get to choose the background where we start – CIA or KGB (and upon completion of the game once, we also unlock Mossad). Although their plots eventually converge, the introductory few missions are different. A lot of attention has been given to making the setting feel believable. With the KGB background, the main character and other plot-related characters even speak on Russian during the missions, which is a superb level of detail done for the sake of immersion.

Regardless of which background we choose, we start by creating our main character. We can customize their look and attire. This character is important for the plot and so their survival in the missions is important (whereas any other agent we hire is expendable). 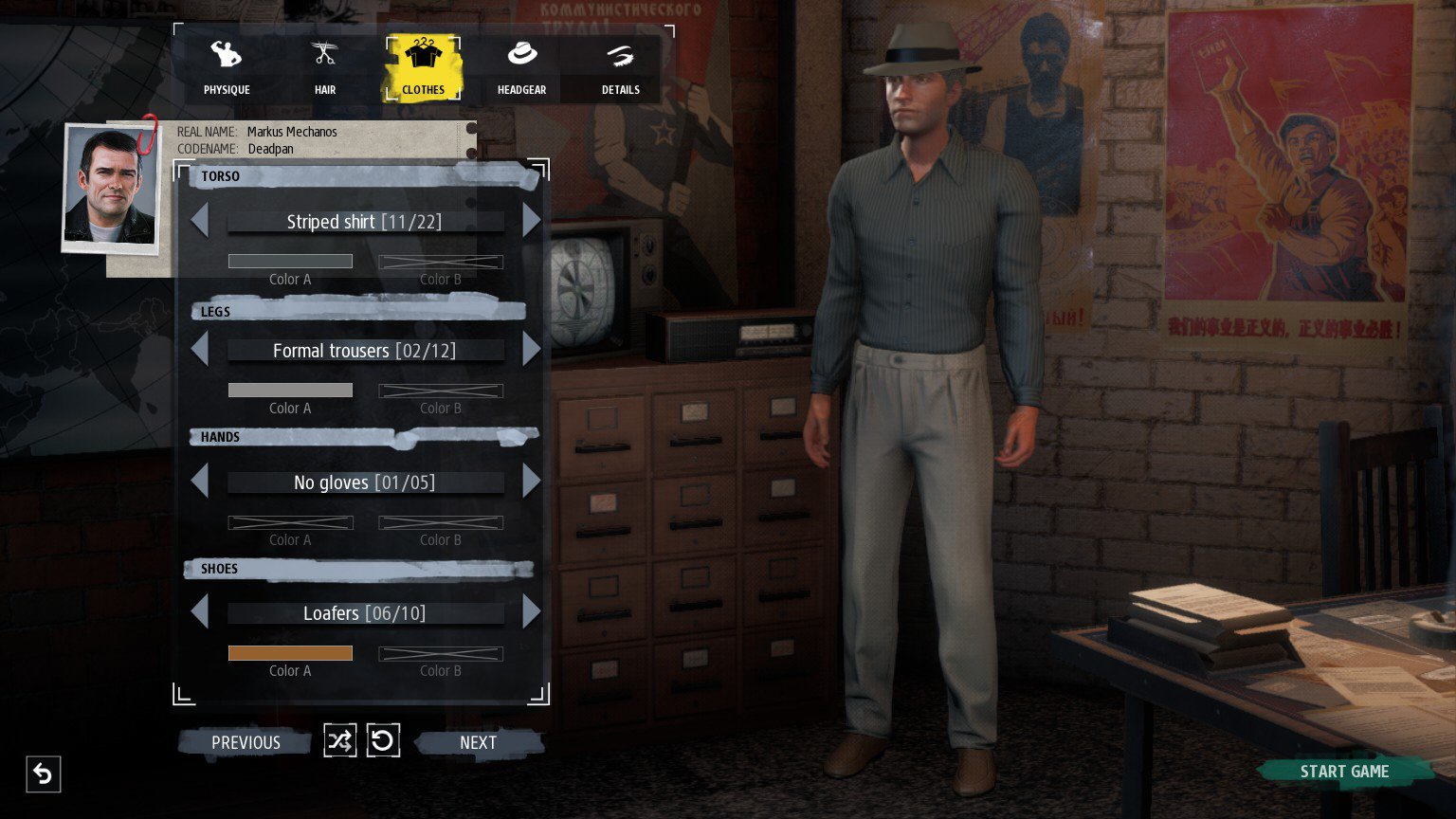 The story generally follows conspiracies and espionage during the 1980s Cold War. It’s not something that I’d consider to be a great plot, but it does its job well enough to service the gameplay. Most of the impressive plot elements are mainly tied to gameplay, such as it being possible for your agents to be moles working for the enemy or your agents ending up having personal problems at some point which you have to pay attention to and resolve in order to win their utmost loyalty.

These sudden events greatly spice up the game and can bear long-lasting consequences. Our decisions affect the side stories of some of our agents, which is a very nice touch. 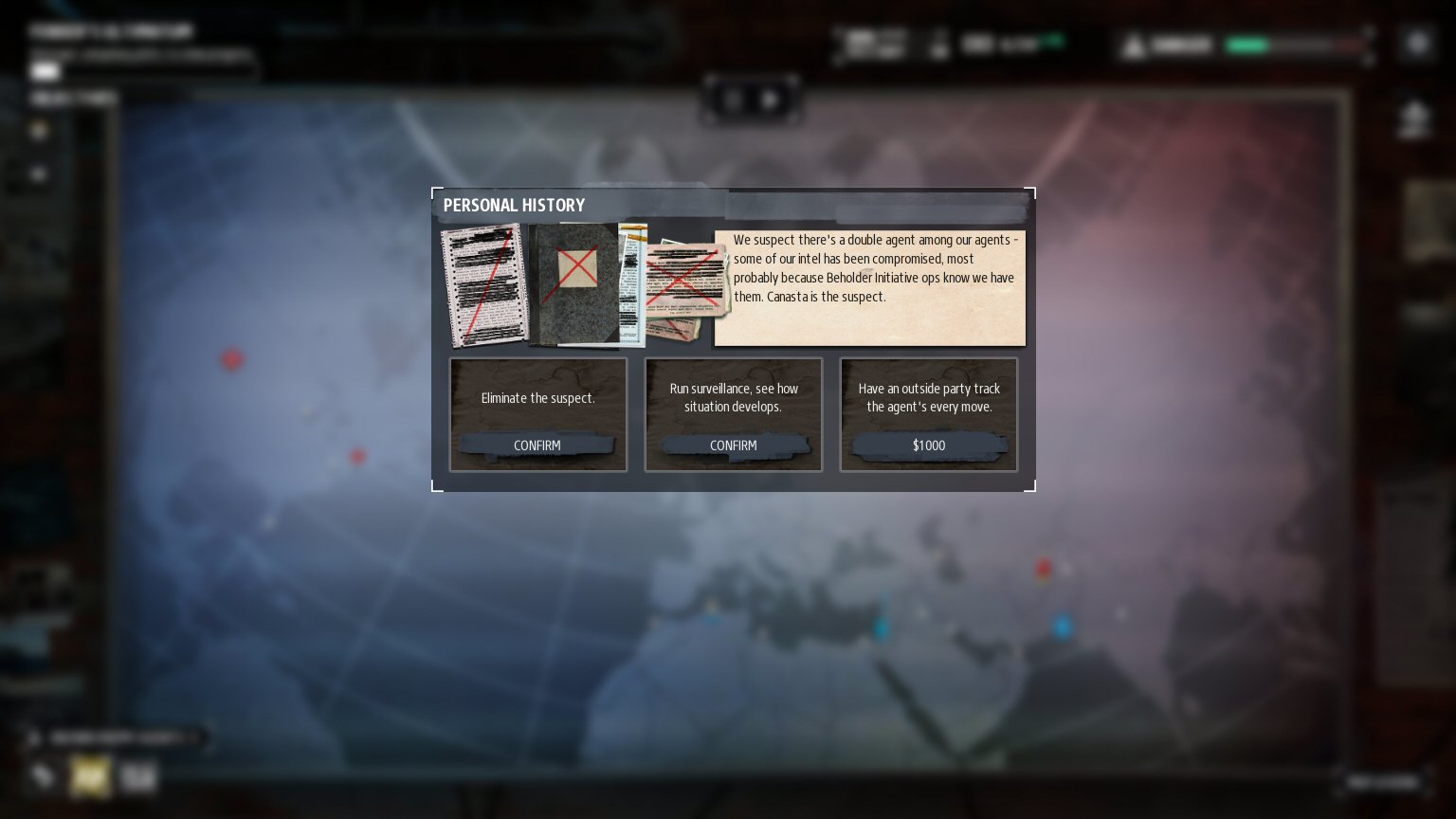 Gameplay – at the base

Just as in other tactics games, we have our base of operations. In the base we do everything needed to train and improve our agents, to prepare for missions, to uncover secrets, and more. Our agents all have different perks, which give them some form of an advantage on the field, whether it makes them harder to recognize when they wear a disguise or whether it’s something that helps them in combat. They also undergo additional training to improve proficiency in different weapons or to improve their stats.

The base itself also needs to be upgraded throughout our campaign via the workshop. We start with a few available upgrades, but as the story goes, we gain access to many more. The upgrades include things such as allowing us to forge more cash and increase base’s income, to having a higher agent limit, to reducing costs of certain services, to having access to informers more frequently, and so on.

During the story, we also collect important documents or receive them from informers. These we have to take to an investigation board and piece the clues together. Some of these are necessary for story purposes, but others uncover other things, such as potential agents we can hire, identities and locations of enemy agents, or new gear for us to craft. 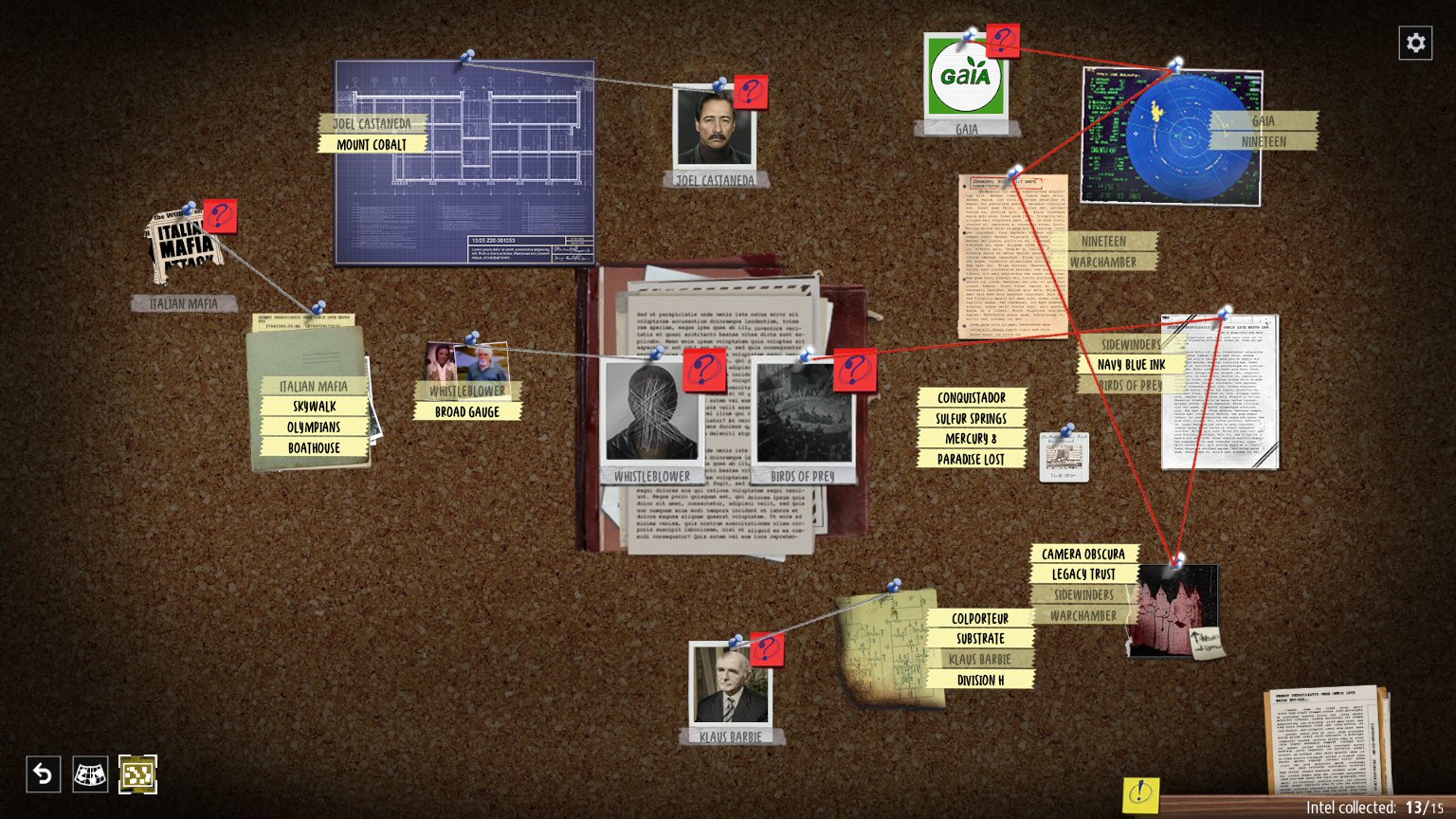 Partway through the story campaign, we also unlock a brainwashing facility. This facility provides an extra depth to our macro tactics. If we capture an enemy agent alive in any mission, we can then brainwash them in this facility in a variety of different ways: we can turn them to our cause, we can erase all their existing perks, we can interrogate them for secret info, we can implant a control phrase which allows us to gain control of this agent during a mission if they’re among enemy ranks, and we can also turn them into saboteurs and make them go back and destroy one of the enemy HQs. The enemy can, of course, do all the same things to our agents if they get captured in any mission. 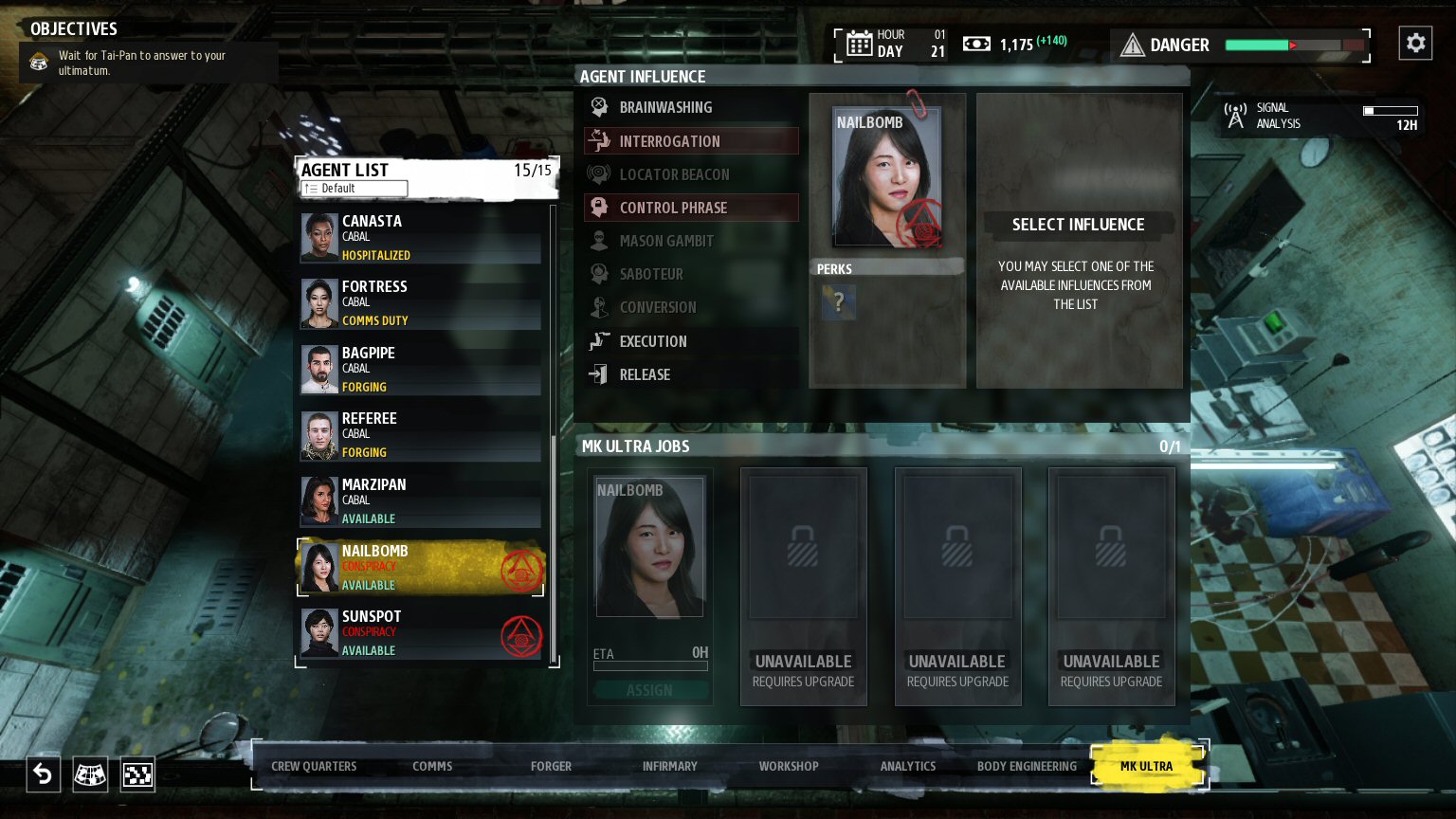 The most important thing we do at the base is on the world map screen (somewhat similar to XCOM), where we assign our agents to the missions on the map and then allow time to elapse. As time goes, new potential areas of interest pop up. Some of those are missions, while others are informers who can aid us in obtaining useful information. The missions vary. As time elapses, enemy agents go about their own business too, and they will try to uncover the location of our base (adding to its danger rating, which forces us to relocate once this gets too high), so some of our missions involve foiling the enemy activities, while others are there to further the story plot. When we do come across an enemy activity, we can tackle it in a variety of ways, depending on how soon we come across it. If we discover it early, we can send agents to simply interrupt their op, or recon the area, or tail enemy agents, but if not, then our only choice is to assault, in which case we send a team into the field. 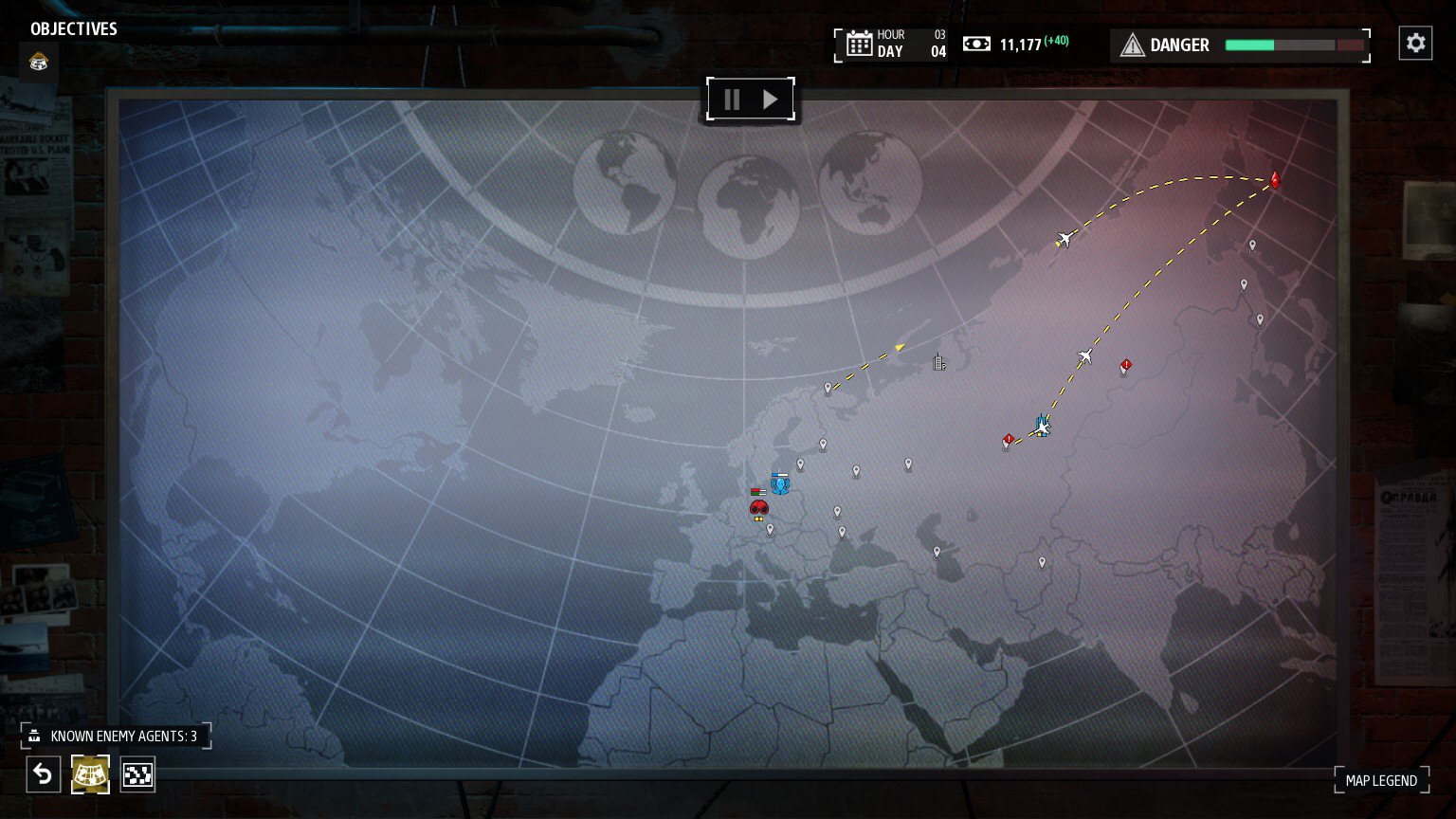 Gameplay – in the field

Whenever we choose the ‘assault’ method of tackling a mission, be it a story mission or simply a way to foil enemy activity, we pick a team of agents and send them into the field, and this is where we’ll find ourselves on an isometric map of some location and move our people on a turn-based basis as we’re used to seeing in tactics-based games. 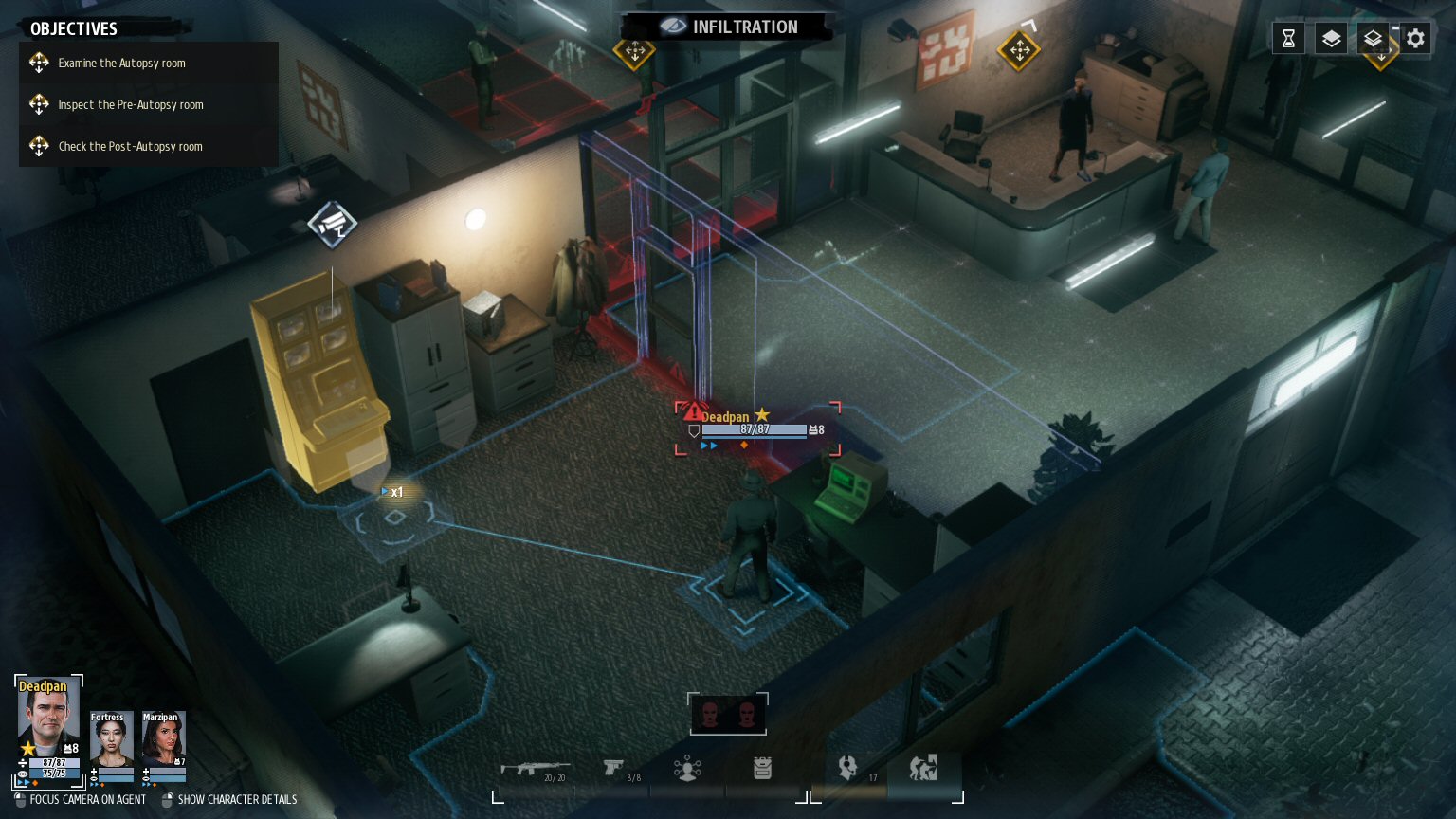 However, we do not go in guns blazing right from the start. Upon arrival, we start with the planning phase, where we can choose the drop-off point for our agents and any tactical options such as spotters or snipers to aid us. Once that’s done, we begin the infiltration phase. In this phase, the enemy is not aware of the presence of our agents and we have the element of surprise. This is where we have to act stealthily and not draw suspicion. If we open fire in this phase, it will trigger an alarm (unless we use silenced weapons). We can, however, knock out the guards from melee range if we manage to get close, and then to dispose of their bodies so that nobody else sees them. Being seen in a restricted area can also trigger an alarm unless an agent wears a disguise. Disguises can only be given to a certain number of agents from the start and only if tactical recon was done on the mission prior to the assault. 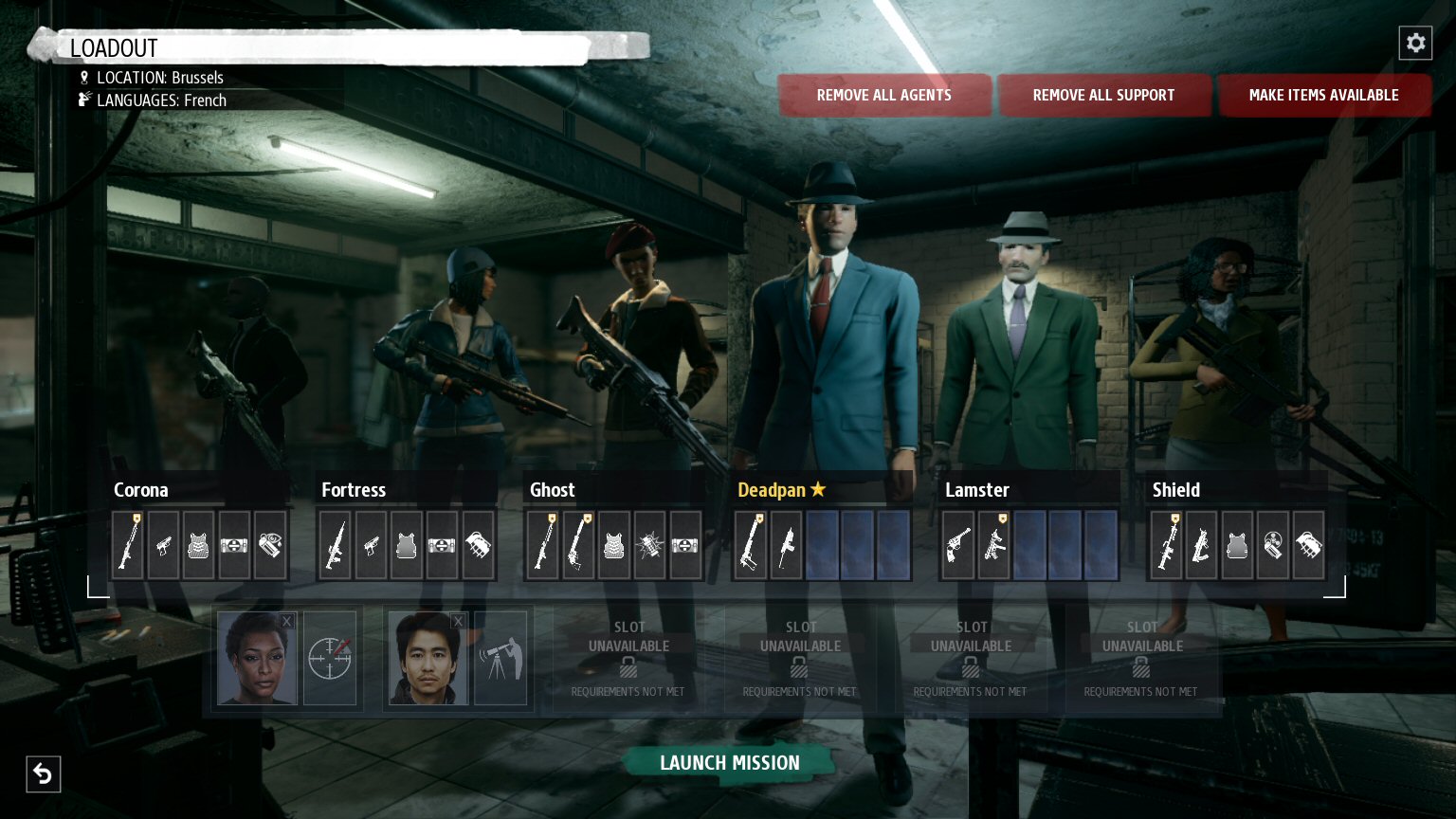 If the mission objectives are done without raising an alarm and the agents evacuate successfully, then the mission will be complete. If, however, an alarm is raised at any point, we enter the action phase, where all our agents take out the weapons they’ve been equipped with and the combat takes place pretty much akin to XCOM games with the cover system. Sometimes this can be scripted and unavoidable, especially if it’s a story mission, but most times this can be avoided and missions can be done with the utmost stealth. Although the missions can be completed by brute force, this is not encouraged by the game, because enemy reinforcements keep arriving after a certain number of turns, which means our agents can get easily overwhelmed if they continue this way for too long. It also causes the agents present in the mission to receive ‘heat’ at the end of the mission, and if the agent receives enough heat, their identity gets compromised and fake new ID needs to be bought or else stealth with them in the party becomes impossible.

One big difference though from XCOM in how combat is handled is that there’s no RNG whatsoever. The shots do not have a chance to hit or miss. Everything is calculated based on the amount of ‘awareness’ points a character has and whether they’re in cover or not. The damage dealt with them would depend on all these factors. The more exposed they are and the less awareness they have, the more damage they’ll receive. 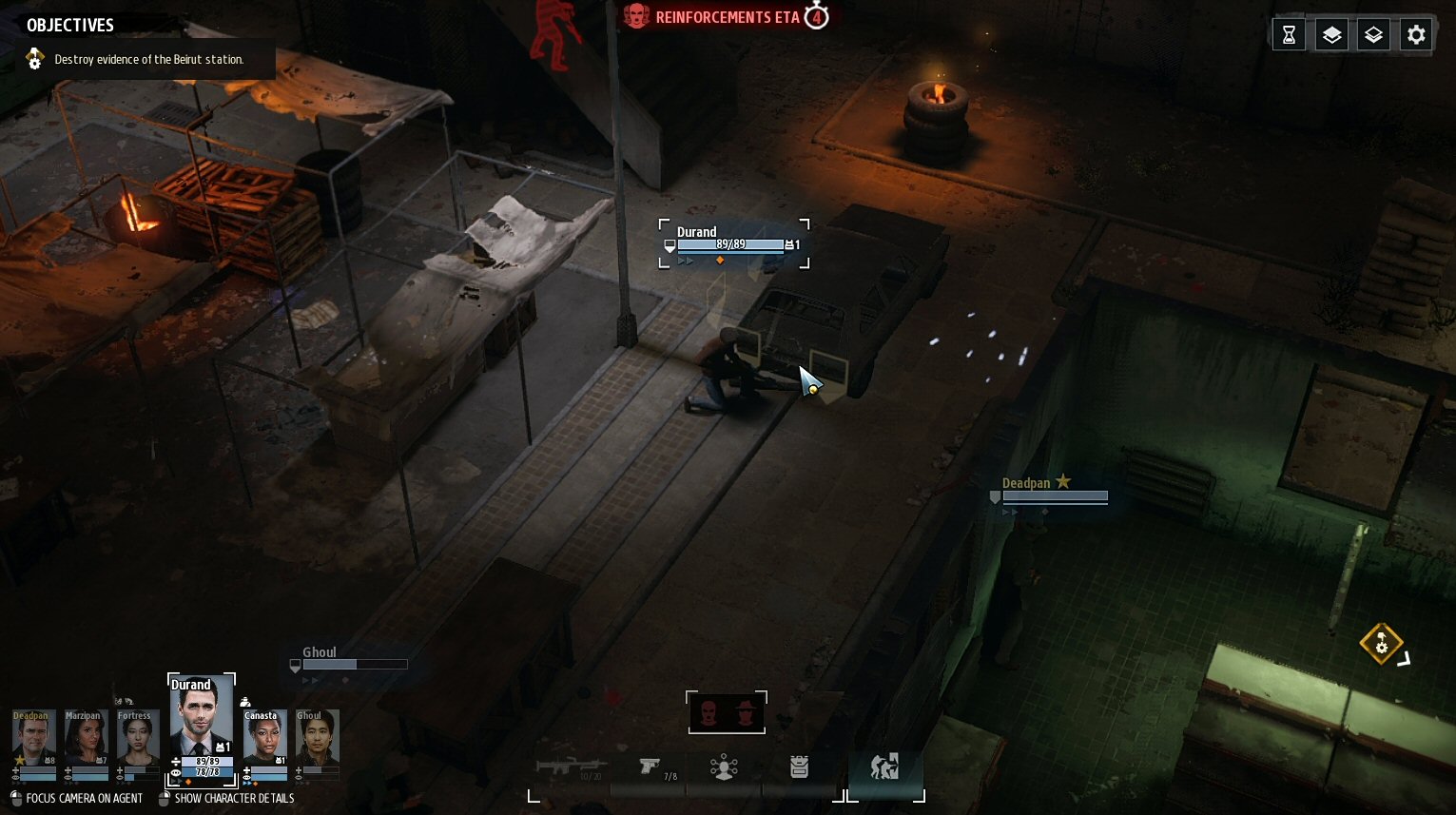 There is also a ‘breach’ ability available to us, which allows two or more of our agents to storm into a room at once and open fire at whoever is inside. This can be useful if there’s a group of enemies inside a room and you’d like to get rid of them at the same time. However, this can raise an alarm if our agents aren’t using silenced weapons when doing this.

There is a big variety of gear that can be equipped to each agent. Each of them can carry two different weapons, two different support items, and wear an armour vest. Agents wearing a disguise can only carry small SMGs and pistols and no support items or armour, so it requires careful consideration to decide who we send in with a disguise. Sadly, on most missions, if you do everything with utmost stealth, you wouldn’t get a chance to use the weapons and support items the agent is equipped with, so in that sense, it can feel that you’ve got all this awesome gear and you’re encouraged not to actually use it because it’s reserved only for the brute force approach which we try to avoid if possible. 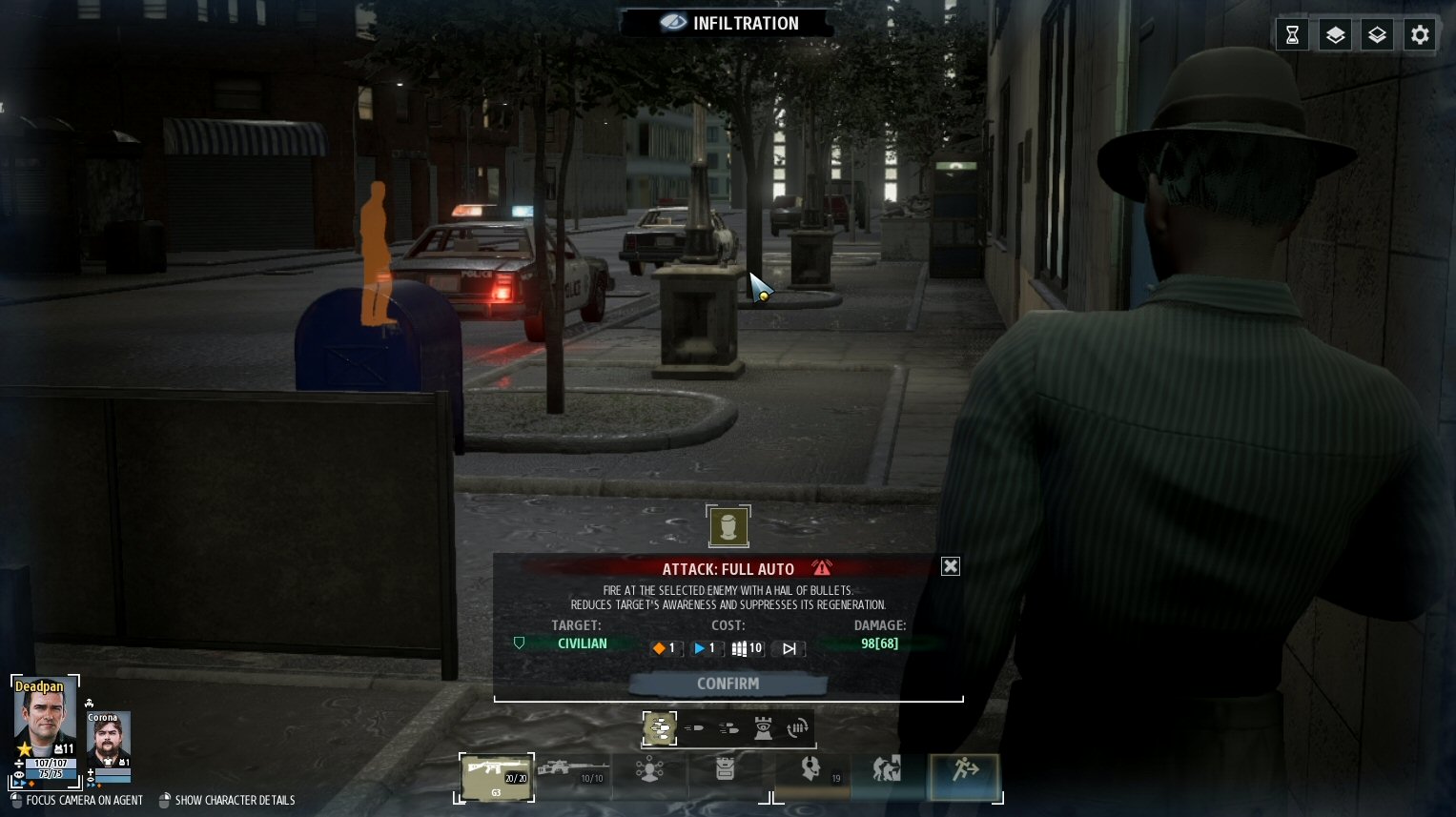 The game has pretty good visuals that do a great job at creating an atmosphere of the Cold War era. Each location is designed well, even if at times some maps do repeat from mission to mission. The interface and menus are all fairly easy to use and all the necessary information is there where we need it, although with so many mechanics being available at once, it can feel a bit overwhelming at first. The map screen is very well-presented and clearly shows all the locations where missions are happening and the plane trajectories of our agents travelling from place to place. And when on the field, the tiles are marked well, including also the tiles we shouldn’t go into (such as those in enemy’s line of sight) which are marked in red. The isometric-style gameplay when on the field is exactly as you’d expect a stealth-based XCOM to be like.

Music is generally nice too. Most of it is ambient and plays in the background. Voice acting is reasonably good most of the time and most conversations happen over the private radio communication on what’s happening in the mission. 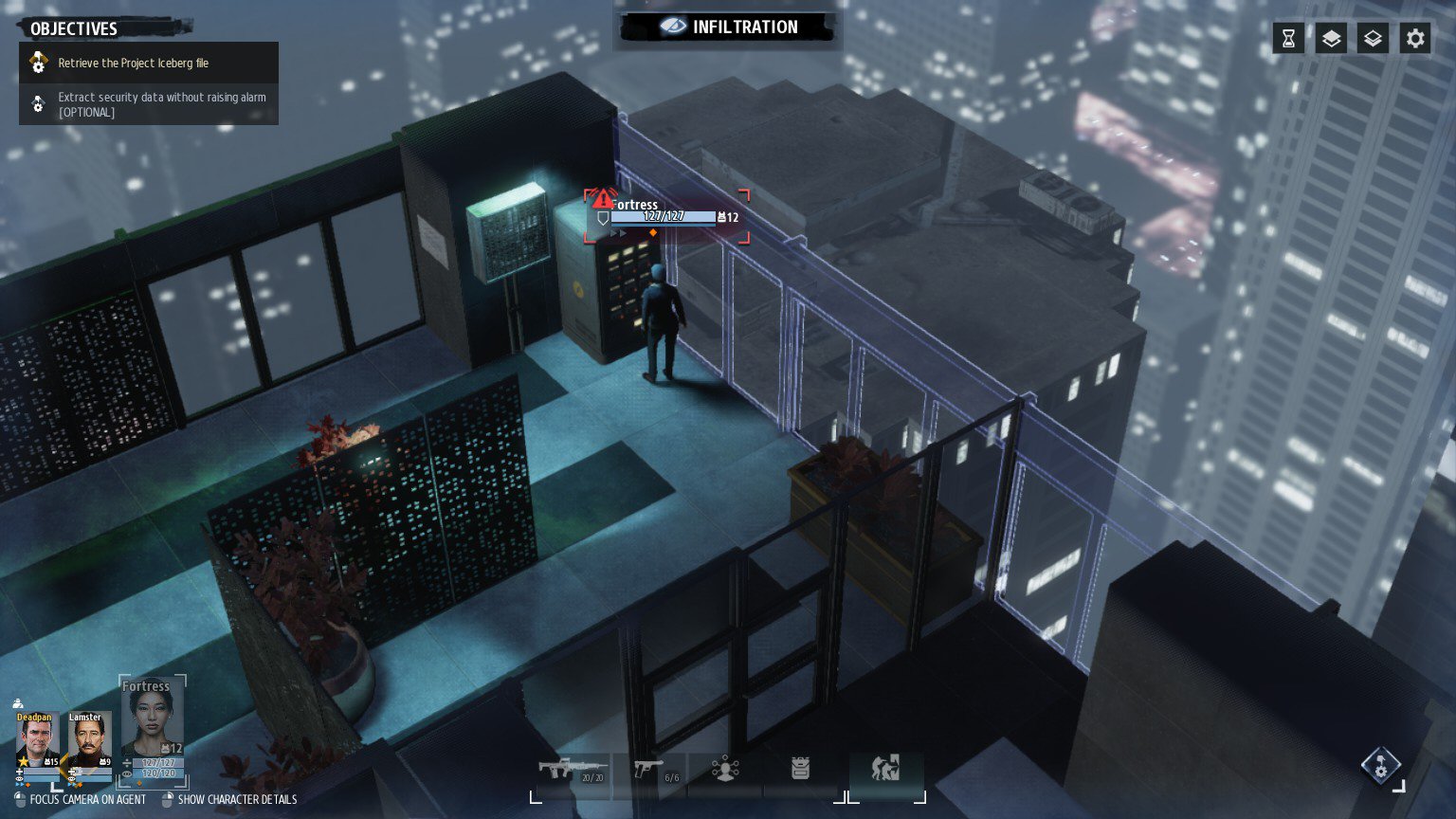 I think this is a rather underappreciated game. It has an enormous amount of tactical depth to it and a lot of interesting mechanics that make gameplay fun. A single campaign can feel a tad long (took me just over 45 hours to do a single playthrough), but with so many gameplay mechanics available and so much choice on how to approach the missions, it feels worth it and there’s a lot to love here, and the game is very replayable.

To me, Phantom Doctrine easily deserves a place on the top tier of tactics games, along with the titans of the genre such as XCOM and Darkest Dungeon.