Another great and gripping sci-fi story about a highly probable dystopian future to add to your list.

State of Mind is a near-futuristic thriller story. It is set in the year 2048, where the world faces many of the issues that our own world is going to face very soon, issues such as body modification, virtual worlds, robotics, sentient A.I, cyberwarfare, memory manipulation, and mass surveillance. The society faces a lot of civil unrest in connection with these issues, with many people being negatively affected and powerless to change anything. Social inequality and corporatocracy are also strongly prevalent, as is the case with many stories set in the near future.

At heart, this game is a 3rd person point and click interactive story with some choices that have consequences and occasional puzzles to solve.

The game starts us taking control of and alternating between two characters: Richard Nolan, a cynical technology-hating journalist living in Berlin whose family life is falling apart, and Adam Newman, a wealthy and successful man but whose personal life is also starting to get shaken. Over the course of the whole story, we also get to play as a few other characters too which are connected to the story events and even to witness the backstories of some of them.

For the most part, the story revolves around Richard, as he wakes up from a car accident and realises that his wife and son are gone and nobody knows of their whereabouts, so he begins using everything at his disposal to find them. 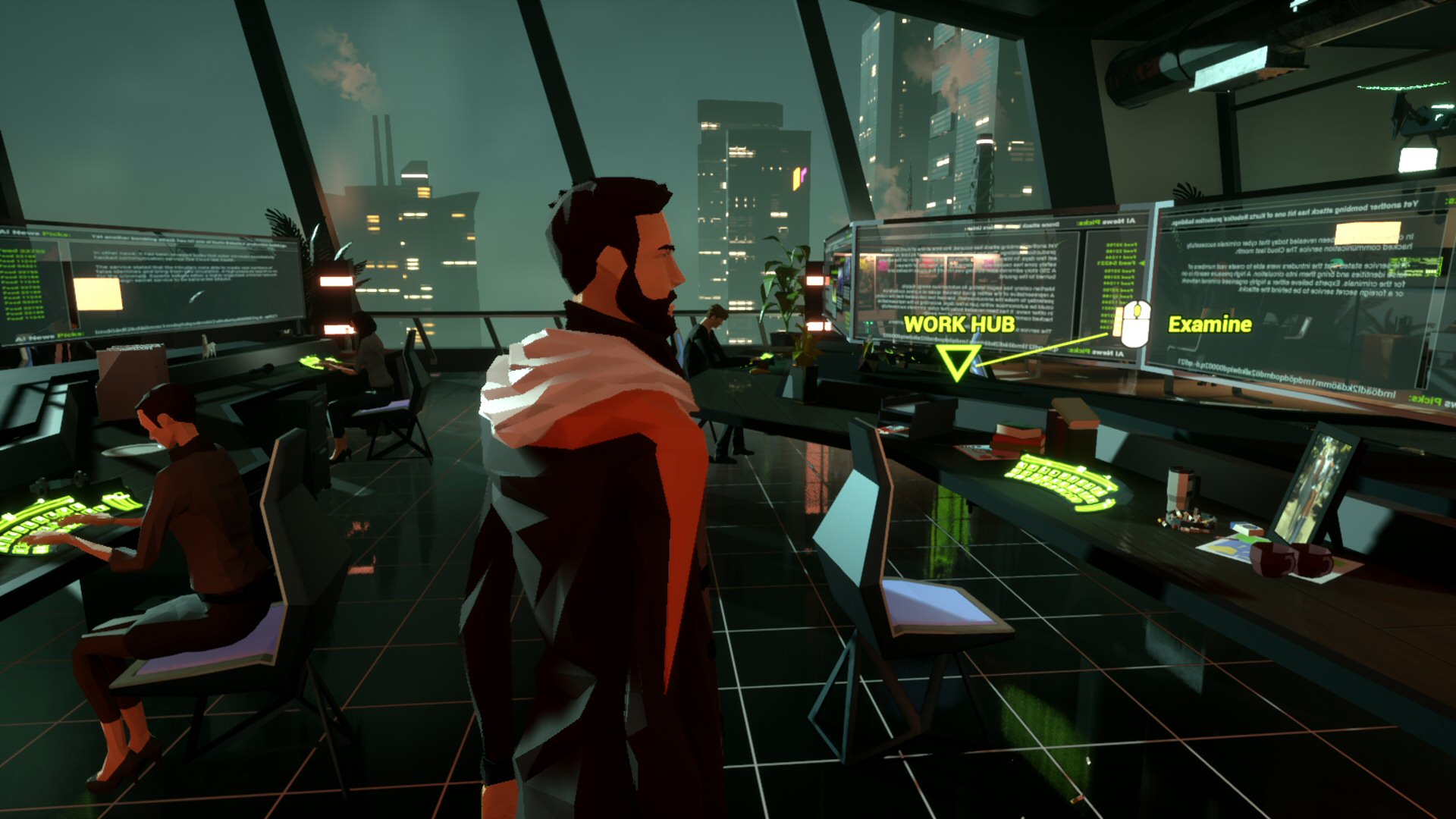 Throughout the game we also get to access flashbacks of the past of some of the characters and learn more about them. These were well put together and even had emotional moments. They were a great way to learn what sort of person each character is and what motivated them. Aside from human characters, there is also a prominent and very likeable robot character, Simon, who is a lot more aware of what’s going on than other bots. 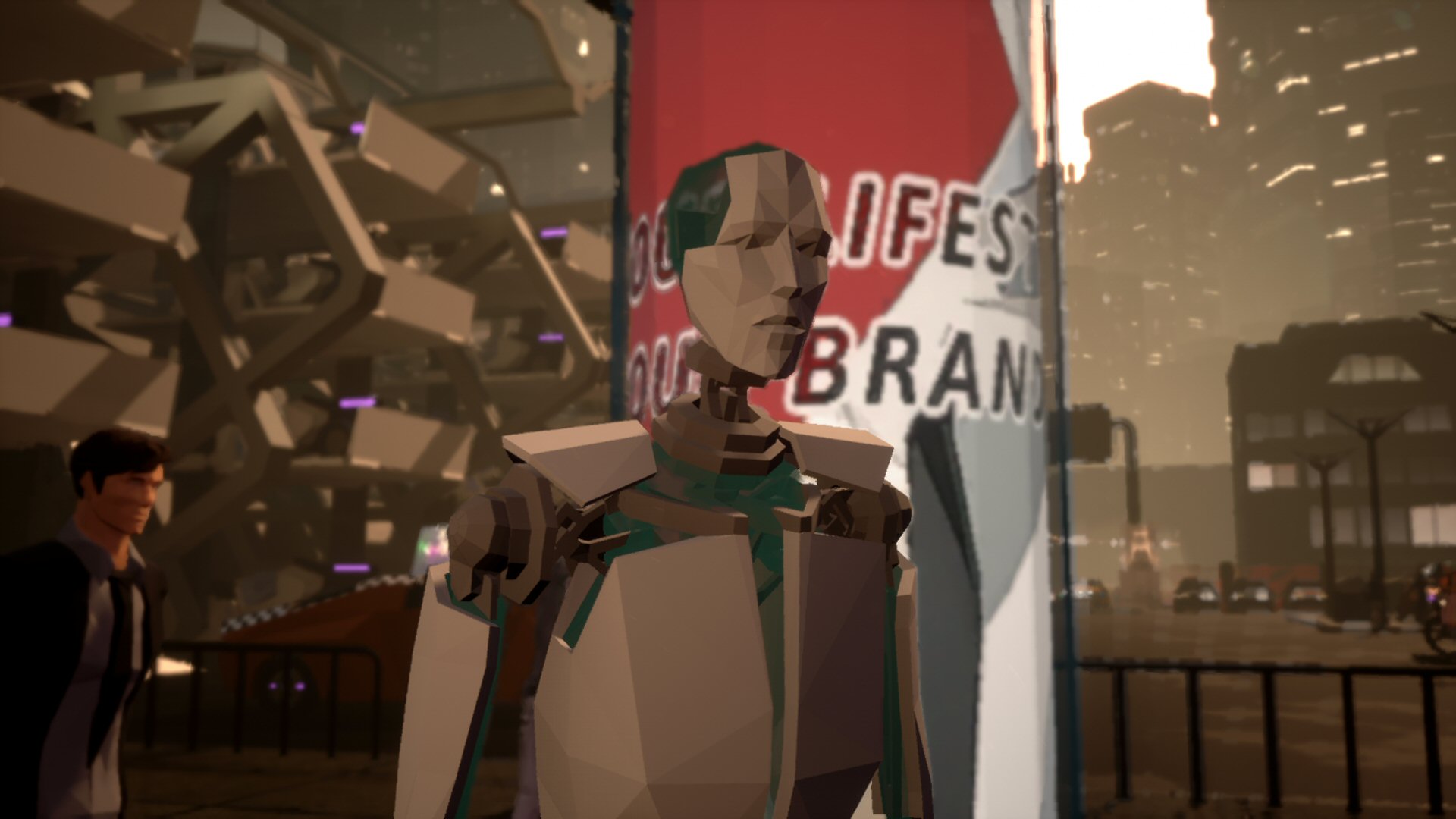 A few parts in the game, particularly when we follow Adam’s side of the story, can feel a little flat and uneventful, but for the most part, the story flows nicely, and the slower parts are there mainly to develop characters and show us what their relations are like with each other.

I think story-wise, one significant drawback would be a lack of real choices. Considering that we get a lot of choices through the game, both during dialogues and also outside of conversation, the impact those choices have on the events and even on the endings seems quite small.

In general, State of Mind is a gripping story that kept me immersed throughout. It has a very good character development and superb world-building, making it not only believable in the context of the game, but also as a very real possibility of our own world’s future. 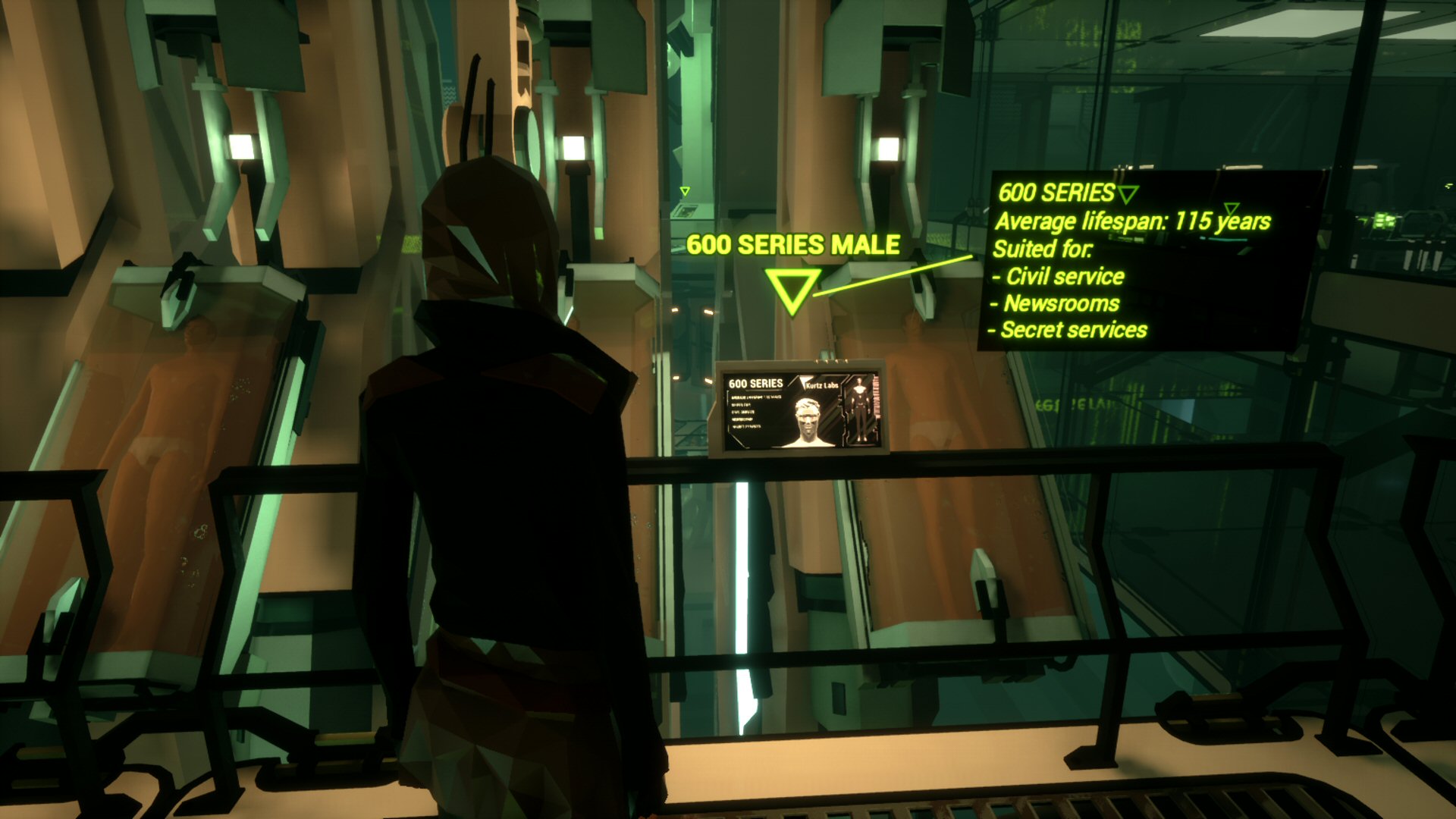 State of Mind’s gameplay is rather simple. Most of the time we’re interacting with the environment and engaging in dialogue with other characters. The parts of the environment that can be interacted with are all highlighted with a triangular symbol. Many of them we can examine to gain some information about them, and some of them can also be directly interacted with, such as ‘use’, ‘talk’, ‘take’ and so on.

A lot of the dialogues have choices where we can react a certain way, although for the most part those choices don’t seem to have much of an impact on the overall story and rather just change the tone of the conversation. 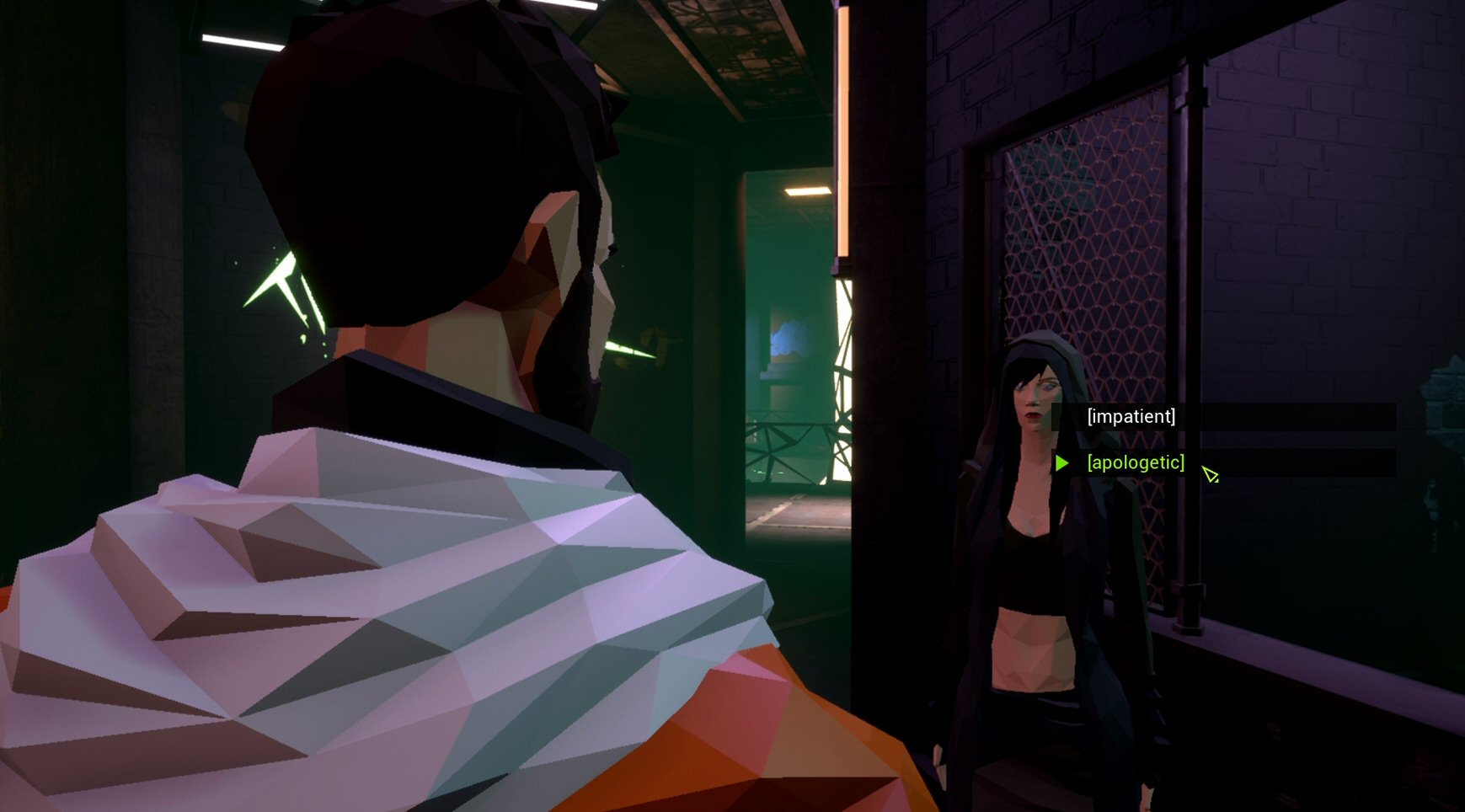 There is a good number of puzzles present to spice up the gameplay a bit and make us use our brain. The puzzles aren’t hard and there is a reasonably good variety of them in the game, ranging from simple ones such as hacking minigames, to more sophisticated ones, like sifting through various news clippings on the computer so to find those which are relevant to the person or event we’re after, or trying to navigate through an area while hacking security cameras and trying to stay away from their field of vision. 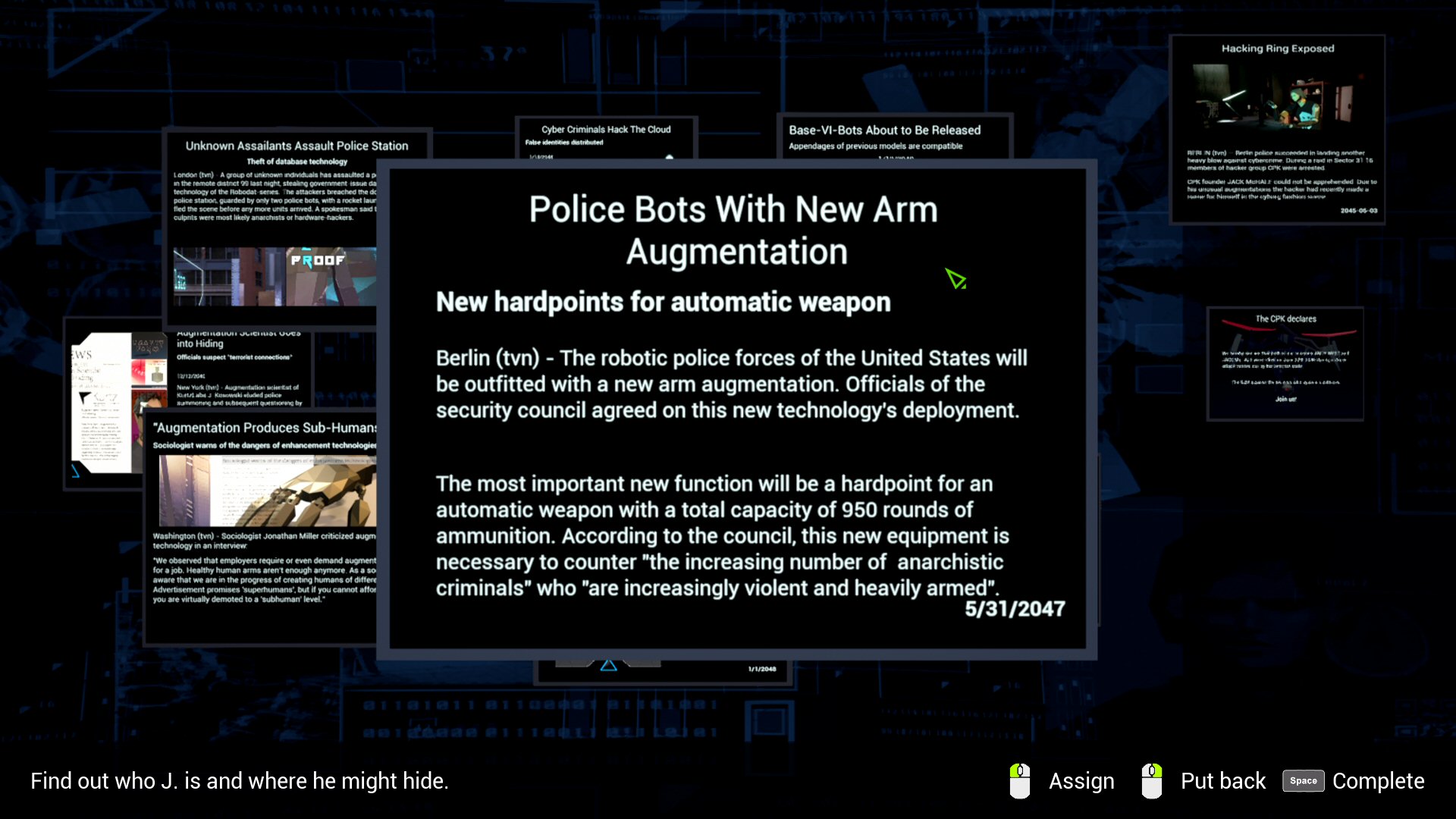 It’s suitable for casual players and for those who are mainly after a deep narrative. The story is the focus here and gameplay only supplements it so that we’re not just moving from one cutscene or dialogue to another. Even the occasional stealth parts in the game do not punish us with a game over or an overpowered enemy to fight. The character simply stops before stepping into a security camera’s field of view and says that we need to find a way to disable it. So, those sections are just treated more like a puzzle. 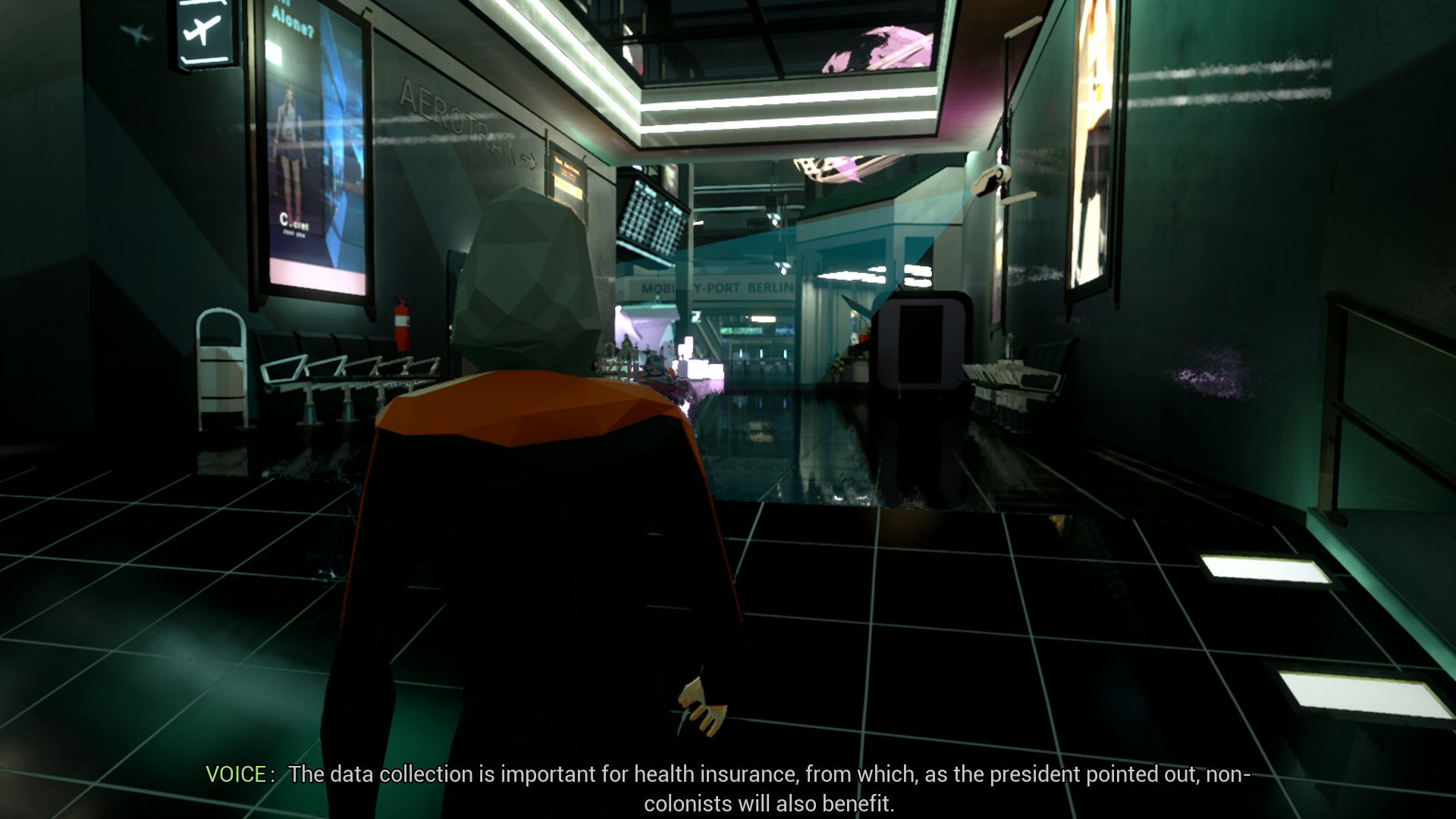 I really enjoyed the game’s presentation, especially on the visual level. It’s got a unique look. The low-poly 3D models of the characters are charming, stylish, and can even feel a bit nostalgic. Instead of going for the usual photorealistic and grimy look, State of Mind takes on a more colourful and creative approach, and it works well and does not detract from the game’s serious narrative and themes at all. It works both for the peaceful safe areas and for the rundown urban areas. 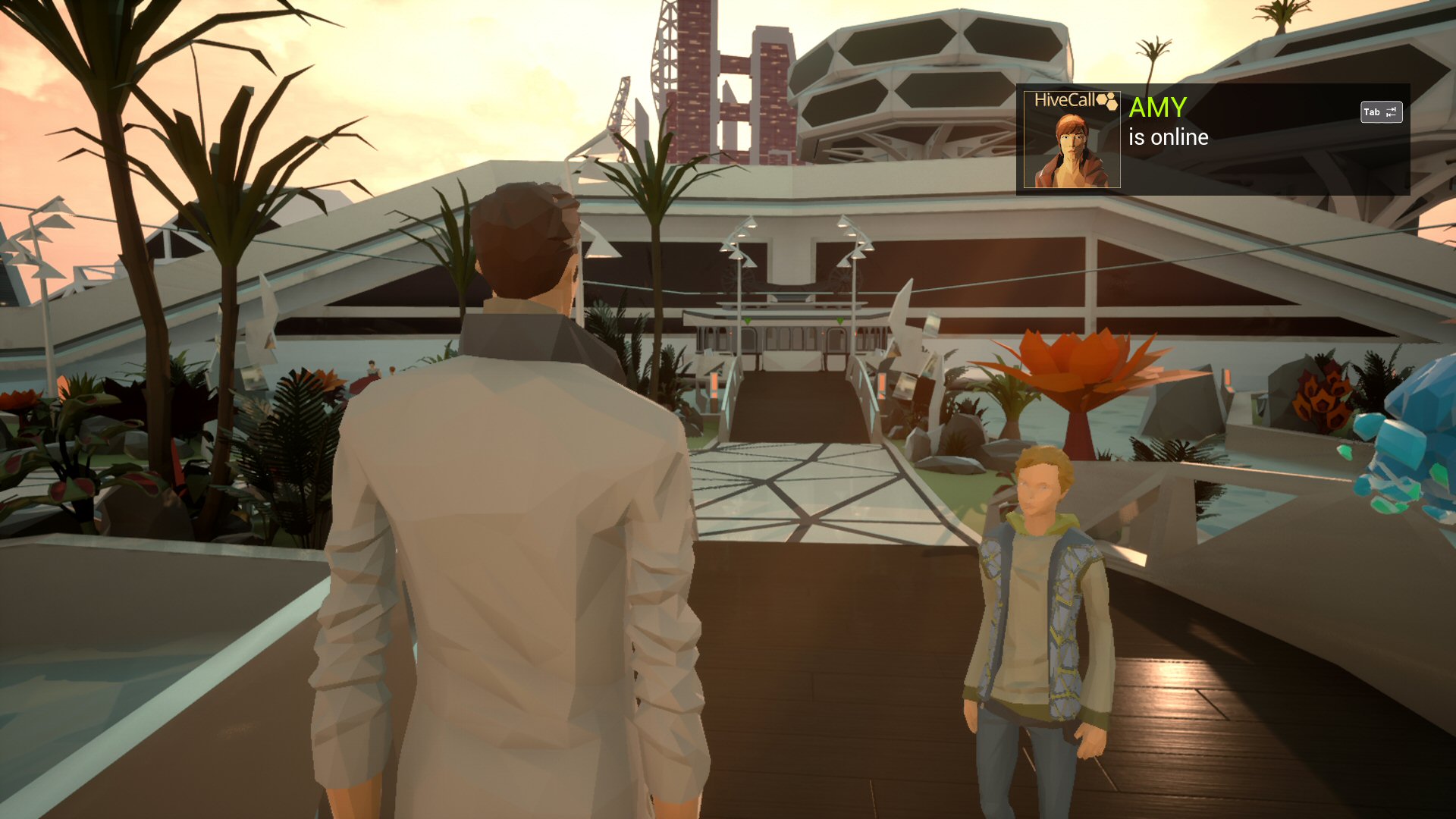 Voice-acting is excellent, passionate, and believable across the board. It did great at enhancing the interactions between the characters, even when the characters were communicating through online to one another.

Music was also very nice. Although most of the tracks did not particularly stand out to me, they all did a reasonably good job at helping the scenes and even entire locations to convey certain emotions.

It’s a pity only that the game doesn’t have a manual save. It tends to autosave only when we move from one major location to another through a loading screen or when any major story scenes have occurred. 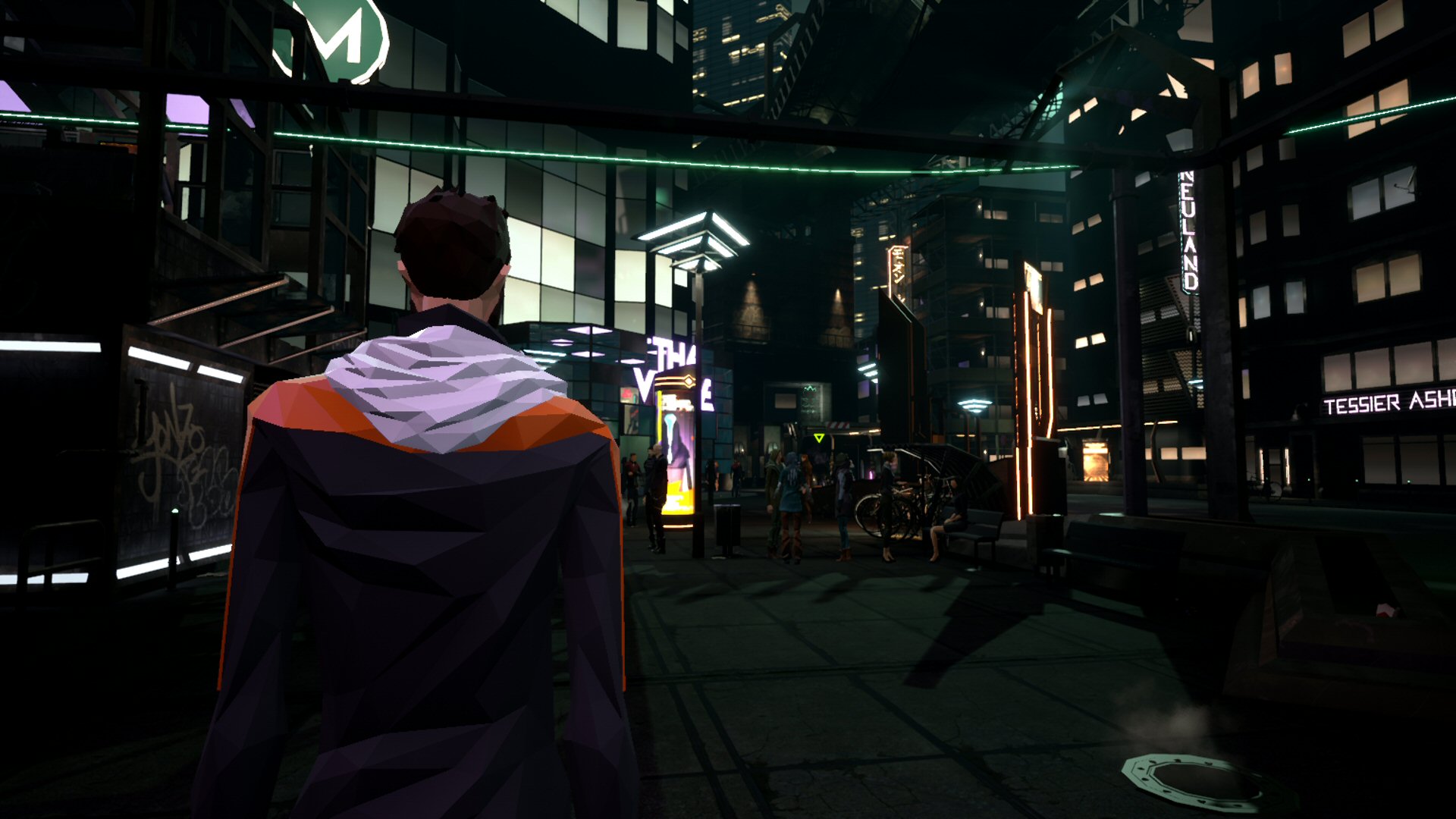 A gripping and deep near-future sci-fi story that any fan of futuristic stories should delve into. In addition to good world-building, the game also has many interesting characters with backstories that we get to witness for ourselves. It’s one of those games where I kept wanting to play on so to uncover more about what’s going on and was looking forward to each play session.

The gameplay is straightforward and casual for the most part with occasional puzzles to keep our problem-solving gears in check.

Some aspects of gameplay and some parts of the story can feel a little meh, but they’re easily overshadowed by the good aspects, and generally this is a solid game.