REVIEW: The Legend of Heroes: Trails of Cold Steel II

A must-have JPRG back then and even more so now.

Does the quality continue?

So recently, I’ve been thinking about the JRPG output of the PS3 generation. Certainly there were some IPs that kept on trucking but I was somehow still missing something that another big IP, that shall not be named, has left a void. Little did I know that I was finding another classic series that scratched that particular itch. Luckily, though I do have the PS3 versions, my first run in with The Legend of Heroes: Trails of Cold Steel was on the PS4 that came with a ton of additional improvements and all the DLC. This made is the it the definite experience and a recommended version for console players, even for those who only played it on PS3 and loved it.

The first one was already a delight to play close to every part of the way. This left me with another question… Is the sequel as good as the first one or even better? 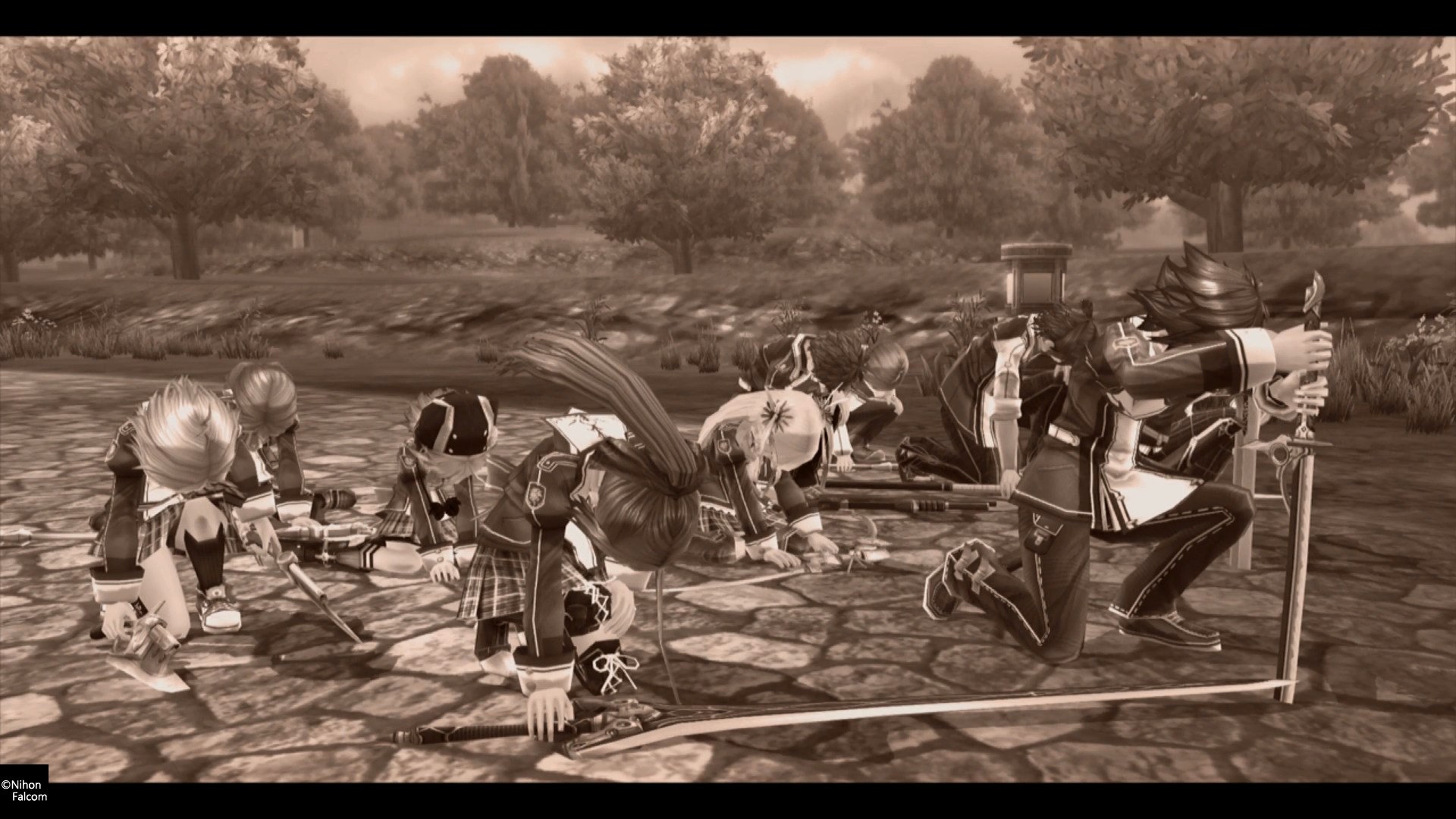 The Story continues where the first game has left off. Due to the cruel twist of fate, things didn’t end on a high note in Trails of Cold Steel I. Our protagonist Rean Schwarzer was forced into retreat only to wake up a month later. Things don’t get better though. Just as bleak as the ending was, the current situation is just an escalation of the prior events. At least he finds himself in a familiar place. While things were starting to go upwards for our Hero, it doesn’t take long for him to find himself a reminder that there is a war raging on. A war that leaves no stone unturned. After much deliberation, it becomes clear of the necessity to assemble Class VII once again to decide their next steps regarding the war. Although things are looking straightforward, you’ll face a certain feeling that there’s much more brewing within the undercurrents than just a simple war.

While it is recommended to play the first game, there’s still an extra option that tells a summary of the first game split up in several parts for those who either skipped it or need a small refresher. Though it does cover the main plot of the story, you will be missing many of the finer details. As I have already mentioned in the review of the first game, the story isn’t just about the major plot points. It is a sum of meticulous world building using the NPCs of the world. The Thors Academy plays a big but also subdued role within it because you will have to find its students and bring them into your crew. 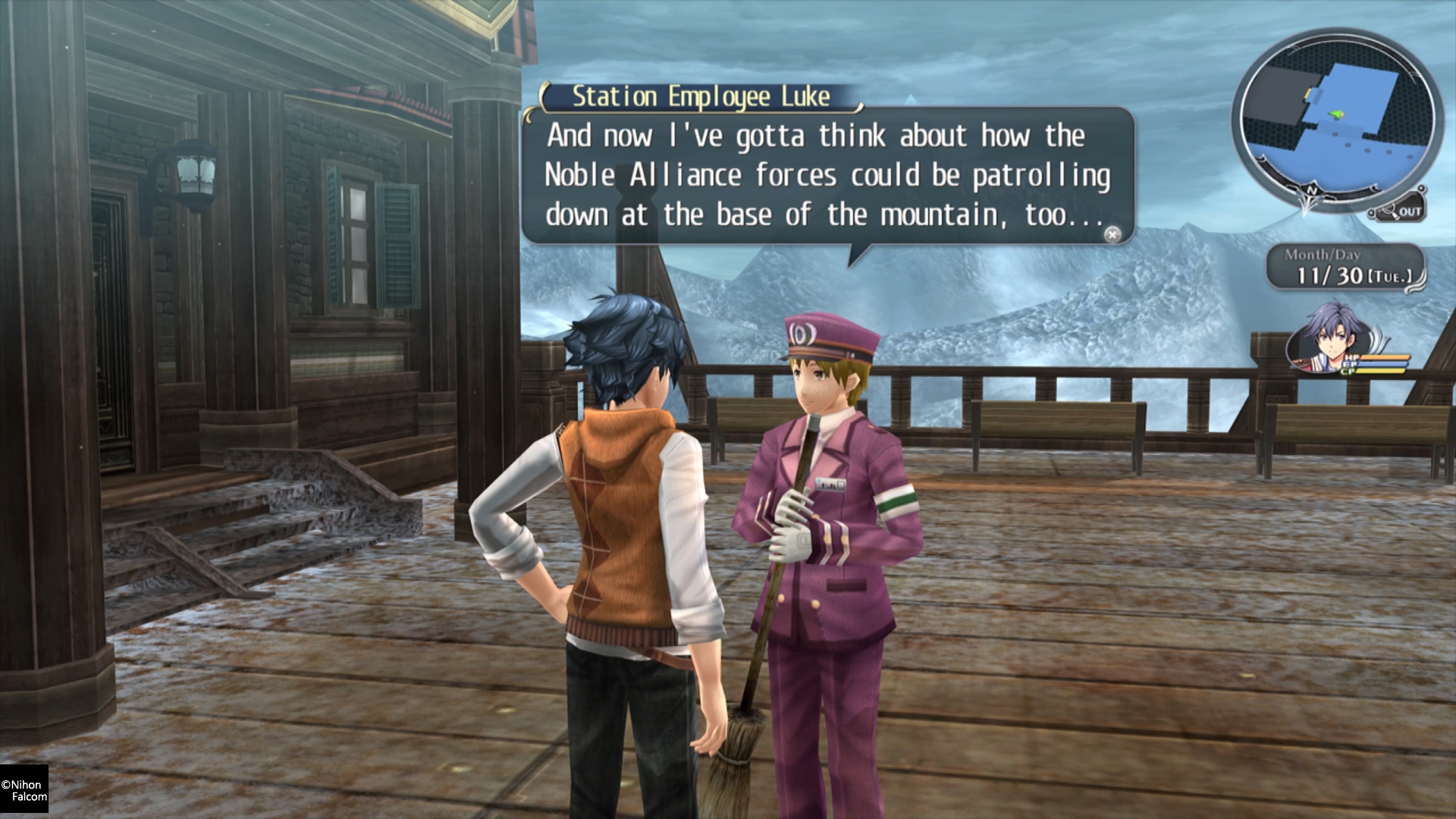 The game rewards you for exploring and talking to NPCs with recipes for cooking or books of a novel called Gambler Jack. By talking to the NPCs you will get a feel of the location’s circumstances, creating a more detailed world utilizing conversations in an organic way. In case you missed or forgot some historic details of Trails of Cold Steel from the library of Thors Academy, fear not, you will get a chance to catch up again later on.

So let’s talk about the story and its characters. Gone are the innocent days. Our friends of Class VII have to face the fresh war-torn world and decide how to approach the situation, including taking care of their loved ones. Unlike other classes, Class VII was special. They were traveling the lands, learning about its different people, traditions and their problems. Finding a solution to the latter was part of their curriculum. They are an undecided faction that was forged by the people and their experience. Friend and Relationships between the characters are already done growing for the most part. Ready to show their resolve and the fruits of labor from their time at Thors Academy and leaving more room for the story of the world to unfold. Rean Schwarzer is finding himself in a bigger role than before and therefore the Ashen Knight will still have a lot to learn. Feuds and farces that found their introduction prior are taking the main stage as barriers to overcome, resulting in steady pacing in storytelling and keeping the interest high.

In case anybody is wondering whether there are any bad surprises that subvert your expectations by acting out of character or out of nowhere developments, there are none that I know of. Everything is properly built up and sometimes dropping small hints. The only thing you might want to nitpick are plot armors but let’s be honest here, it’s a common occurrence and there’s nothing egregiously noticeable. 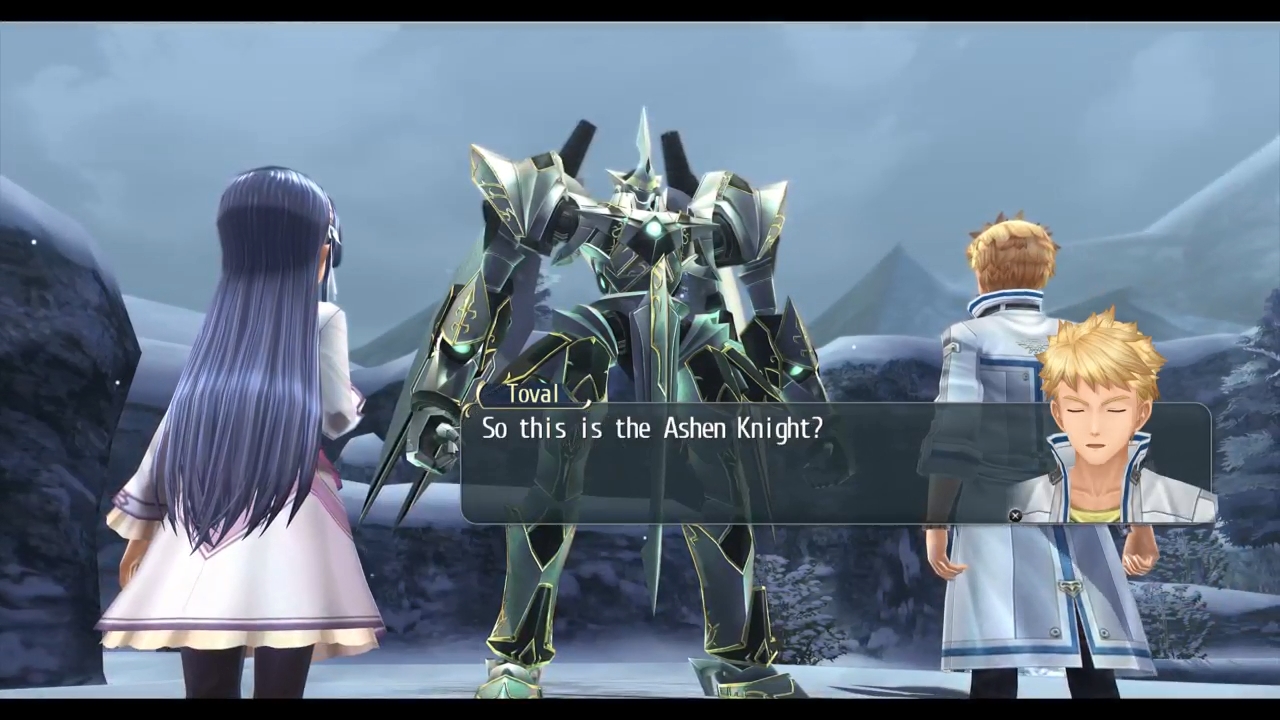 In terms of gameplay, most of it is already covered largely in the review of the first game. Trails of Cold Steel II expands upon what is already there with a few small additions, most notably more action with the Divine Knight that you get a short taste of at the end of the first game with an extra twist for depth. 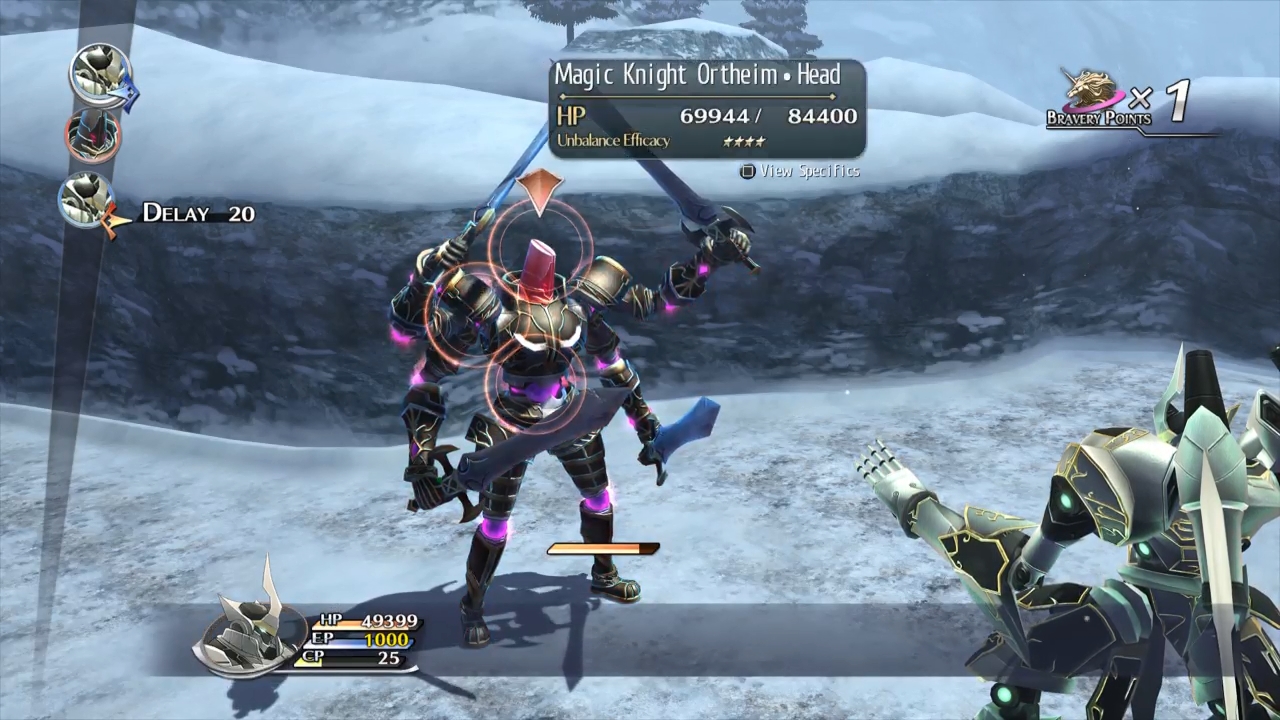 One of the new additions is the Overdrive. It’s a special gauge that fills up while fighting. Once you’re stocked up you can activate it together with the partner you’re in link with. On activation, you recover a little bit of HP, EP, and CP, heal all status abnormalities and do three attacks in sequence. Arts do not require time to cast. All attacks automatically unbalance the enemy resulting in guaranteed follow up attacks with their partner. 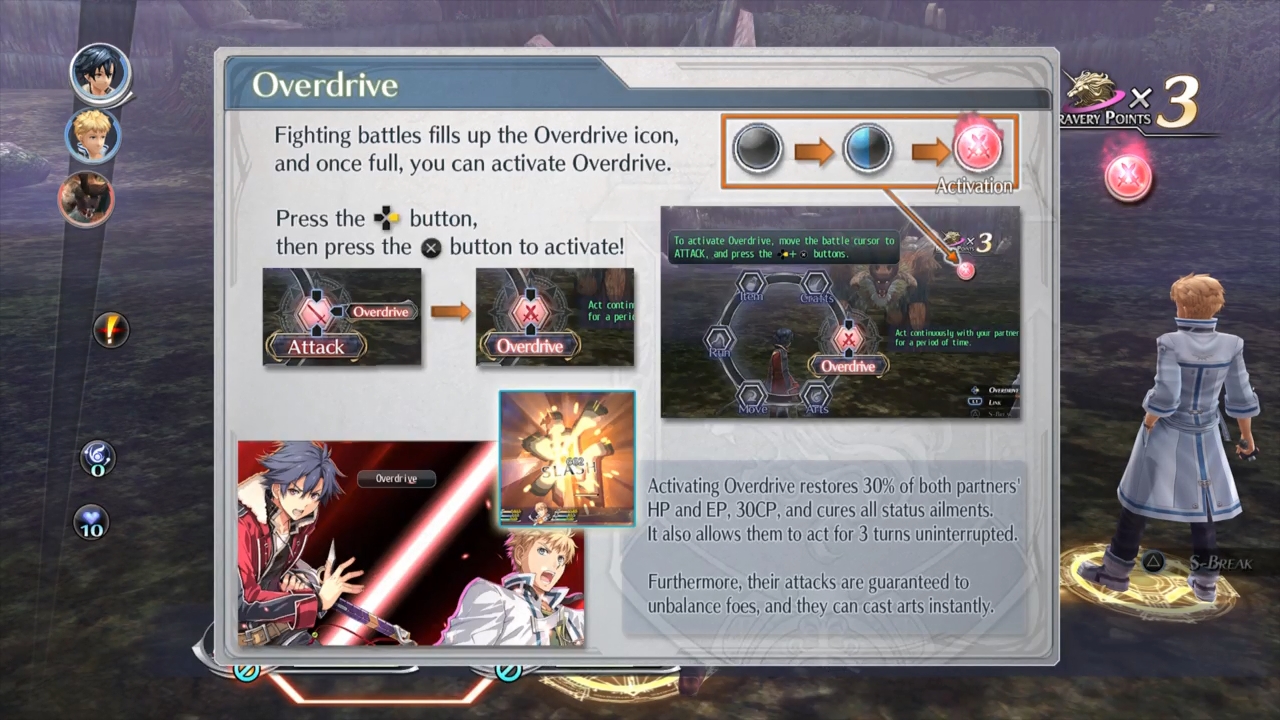 Here’s the catch. In the beginning, only Rean can activate Overdrive with all Members. Finding Trial Chests put predetermined characters into a battle to unlock Overdrive between them. This mechanic adds more depth in how you strategize its usage to turn around specific situations like the random bonuses. Another optional one is the Lost Arts. Powerful moves that are only available once a fight. Some have supportive effects while others attack the enemies.

Enemy roadblocks who may be too high level or just strong can be weakened straight after losing against them as an option. Feel underleveled? The enemy attacks are too damn strong? No need to quit and reload. What if you lose again? Here’s the good news. The effect can be stacked, so try again against an even more weakened opponent. Is it too easy? Don’t fret, you can choose from four different difficulty levels at the beginning of the game.

On non-battle/Overworld side everything is the same old. Buy weapons, upgrade, craft new Quartz and upgrade slots with elemental Sepith. If Turbo Boost and running aren’t fast enough for you there are additional faster options to unlock along the way. The trick to an advantageous encounter I mentioned in the review of Trails of Cold Steel still works but with a slight adjustment. You have to attack twice before moving because the first hit takes too much time before you can move again. A lot of things can be leveled up like the Master Quartz, character levels, and links. The latter gives additional bonuses for unbalance extra attacks.

At a later point, you’ll be able to move across different locations in a flash and you’re given the freedom to decide on the sequence you want to tackle the missions with. Multiple Master Quartz, finding recipes, books, Lost Arts, Trial Chests, optional missions, etc. There’s plenty of content to go around and even with the additional Speed Boost there’s easily 40+ hours of playtime. Taking your time to explore every nook and cranny? I’ll leave that to your imagination.

Like the gameplay, there’s not much to talk about. There’s even less to mention since it’s a direct sequel with reuse of assets because you do go to locations you’ve already gone to and let’s be honest here, there’s no need for a change of music either. Rather it’s quite the opposite. It would feel wrong to have a change in music for locations you already have been before, raising the nostalgia and familiarity. All the more reason for new areas giving you more of an impact. Nothing quite sticks out as off. On a personal note, the battle music gets you pumped for sure.

It’s a revisit into a slightly changed world. As much as you can expect for a timeframe of a month. Lost Arts are another eye candy that rewards your efforts for getting them. Considering this is a game that was released on Vita and PS3 it looks serviceable. If that’s the tradeoff for the fast load times and smart turbo mode I’d take it any day over better graphics but that’s just my opinion.

So where does The Legend of Heroes: Trails of Cold Steel II leave us? At a very good place! The battles are fun. NPCs aren’t just there to make the places fancier. No, they are of intrinsic value helping the game set the stage by delivering details in small pieces. The story’s steady flow keeps it engaging throughout the adventure. It’s not only the story that’s steady but also the characters. Not all are moving in leaps but you feel them growing and maturing when it becomes their time to take the stage. For less patient players, the Turbo Boost will aid you in accelerating the animation, offsetting the scenes on the slower side.

I can hardly find anything to fault in Trails of Cold Steel II and if there is it’s more personal nitpick. One of them are RNG mechanics like attack accuracy and evasion. Both feel a lot more frequent than other RPGs of its kind though still nowhere enough to be frustrating. Unbalancing is another RNG factor that crops up. Which means you have to consider multiple outcomes and plan how to follow them up. So in a sense, it’s there to keep things fresh. 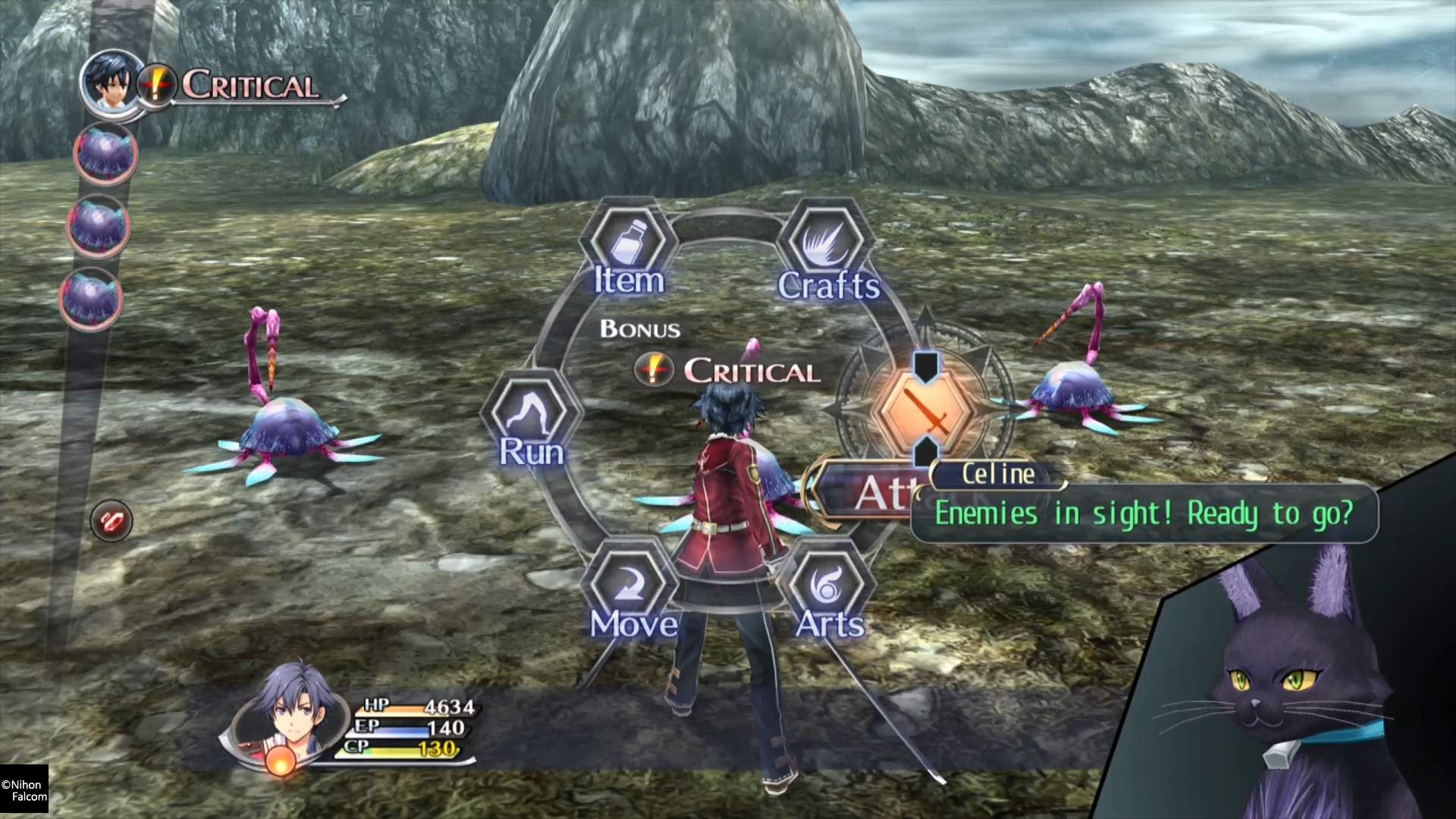 If there’s a list of JRPG must have titles within the PS3 and PS4 generation like Persona 5, then The Legend of Heroes: Trails of Cold Steel II and it’s first part are at the top for sure. This is especially so with the improvements you are finding in the PC and PS4 versions. Giving this game anything less than an Autosave would be a disservice.