Balancing anything in life is hard. It just seems like there’s so much to do, and yet you don’t have enough time to do it all. It’s a little worse while in school, as each class just gives you a pile of homework and tests just keep on coming. Or you’re a master procrastinator (*cough* like me *cough*) as you try to finish all your deadlines the day (or even hours) before it’s due. Honestly, I have no idea how one of my friends managed to do a couple of AP classes, be in a school play, and work (I was barely able to handle the AP classes myself). Some people just make it seem easy I guess. Well, time to put those skills to the test in Persona 5. 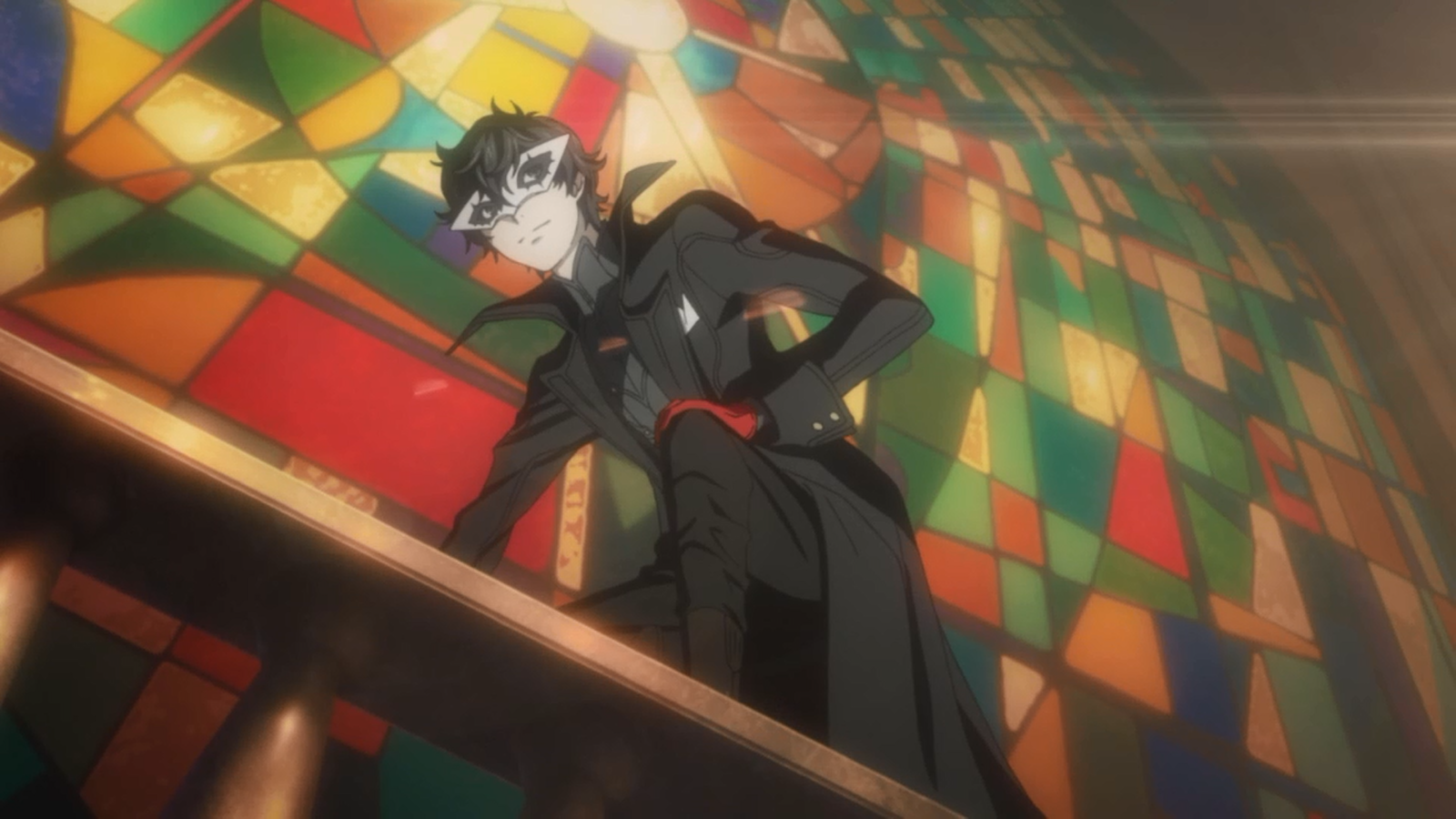 You’re thrown right in as our silent main character and his teammates, who you will soon be acquainted with, are at the tail end of one of their heists. However, this one ended in you getting caught and beaten to sign a false confession. Luckily for us, Sae Niijima decides to take the reigns as she simply asks you to start from the beginning, before you became a Phantom Thief. 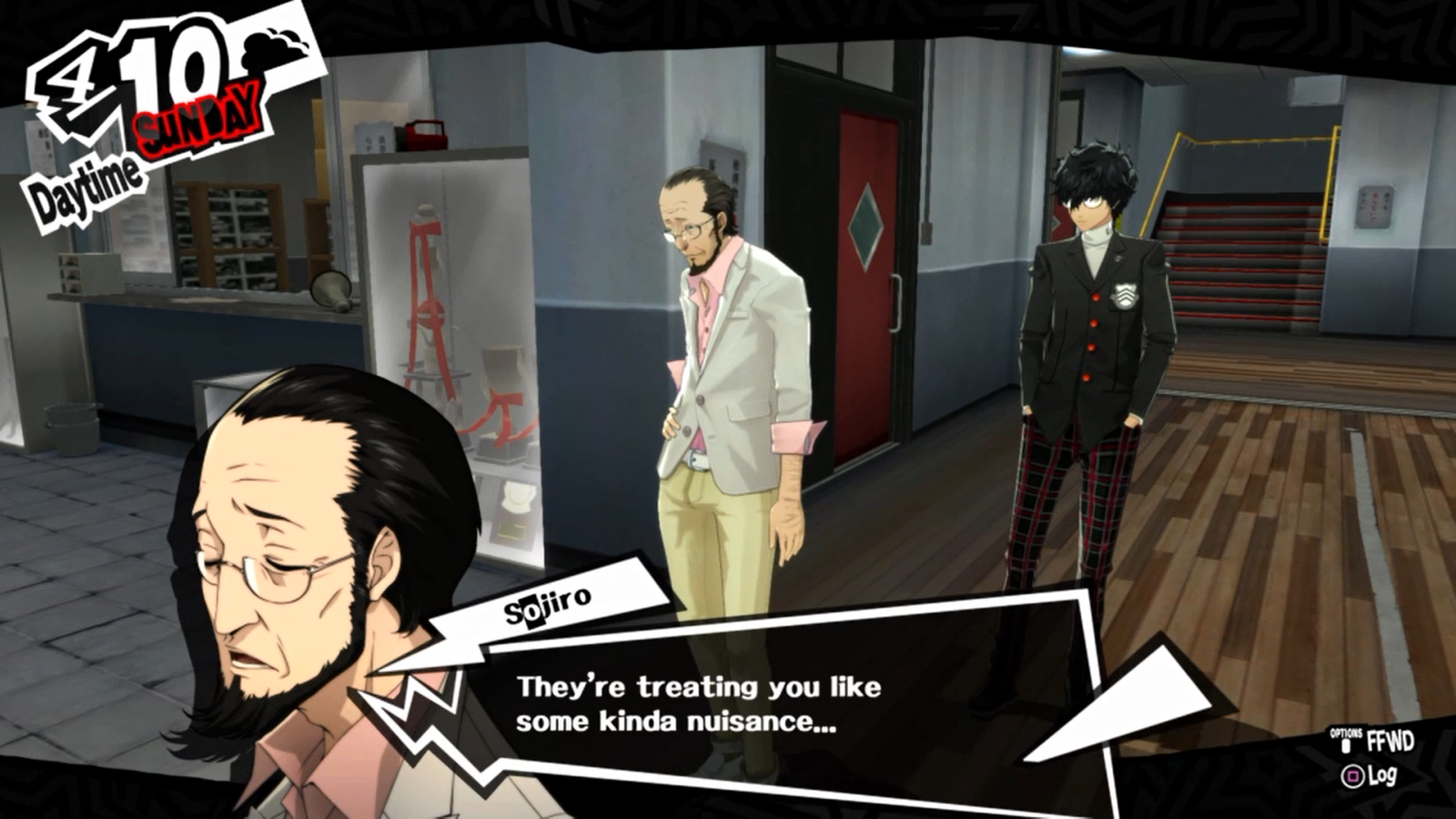 It turns out that your circumstances leading up to this are anything but great. Even though you tried to save a woman from being harassed, you’re charged with assault even though the man tripped over his own feet. You’re then sent away on probation to Cafe Leblanc under the care of Sojiro Sakura, who isn’t too keen on housing you. Even worse, the school you’re transferring to, Shujin Academy, already has the teachers weary and rumors about you spreading around. Even if you wanted to have a decent school life, that’s all gone now as everyone seems to either hate you or avoid you. Well, mostly everyone. You do manage to become friends with another outcast, Ryuji and later on with Ann. 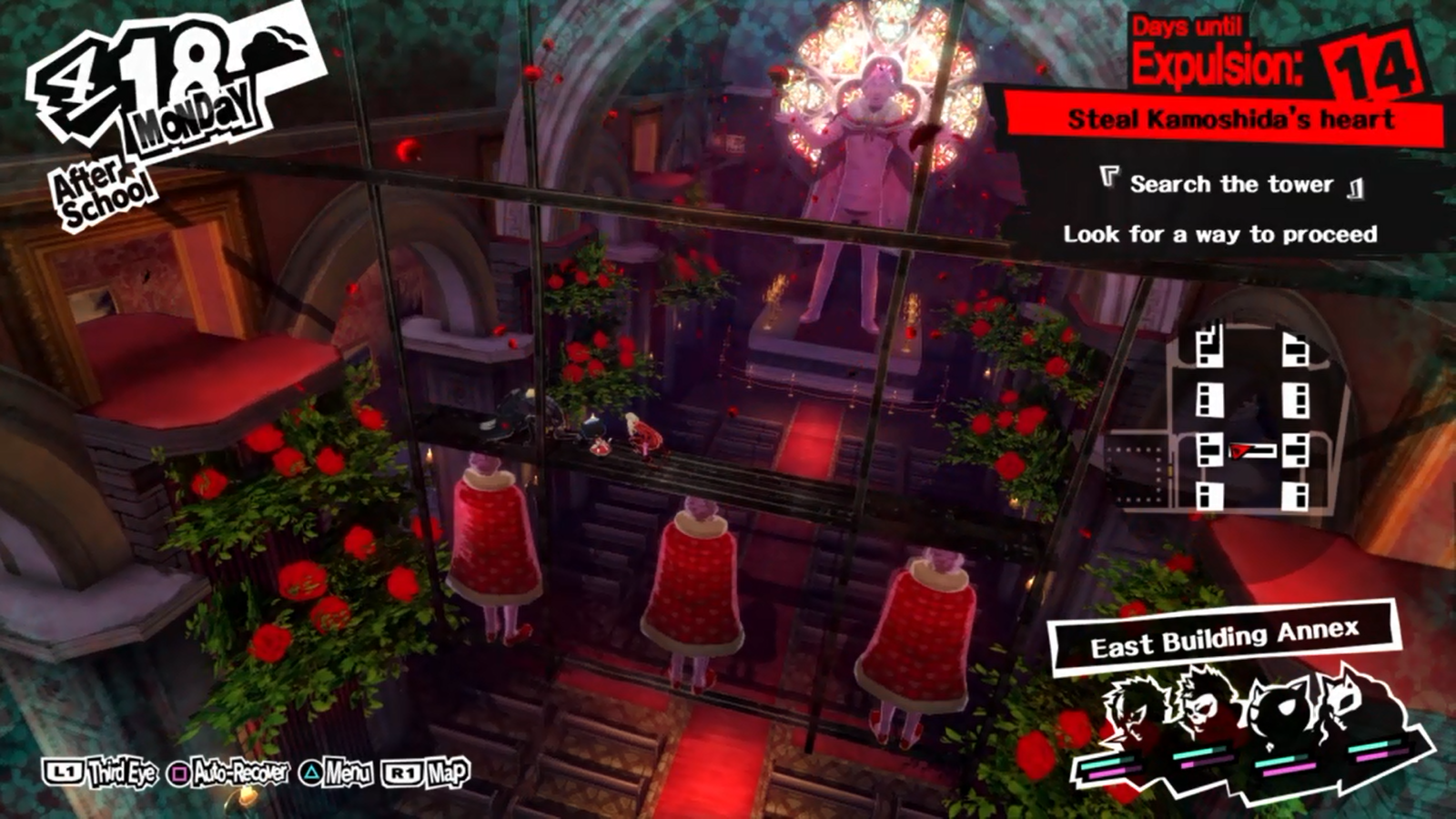 Soon enough, you’re even introduced to the Metaverse, albeit on accident. With the help of Morgana the human, you learn that you stumbled upon a Palace, which is a strong manifestation of someone’s distorted desires and thus a window into how that person really sees others. All you really have to do is steal the Palace’s treasure, or the source of the person’s desire, to trigger a change of heart before the time runs out. Of course, that isn’t going to be easy. Shadows lurk around every corner, ready to beat you up. Of course, combat is turn-based as usual. Each teammate has access to their own personalized gun, which has limited ammo, a melee weapon, and of course a Persona that specializes in an element (well except you, who can use multiple Personas). Tasking you to plan ahead so you don’t run out of ammo or SP (or keep enough SP recovery items) too fast. 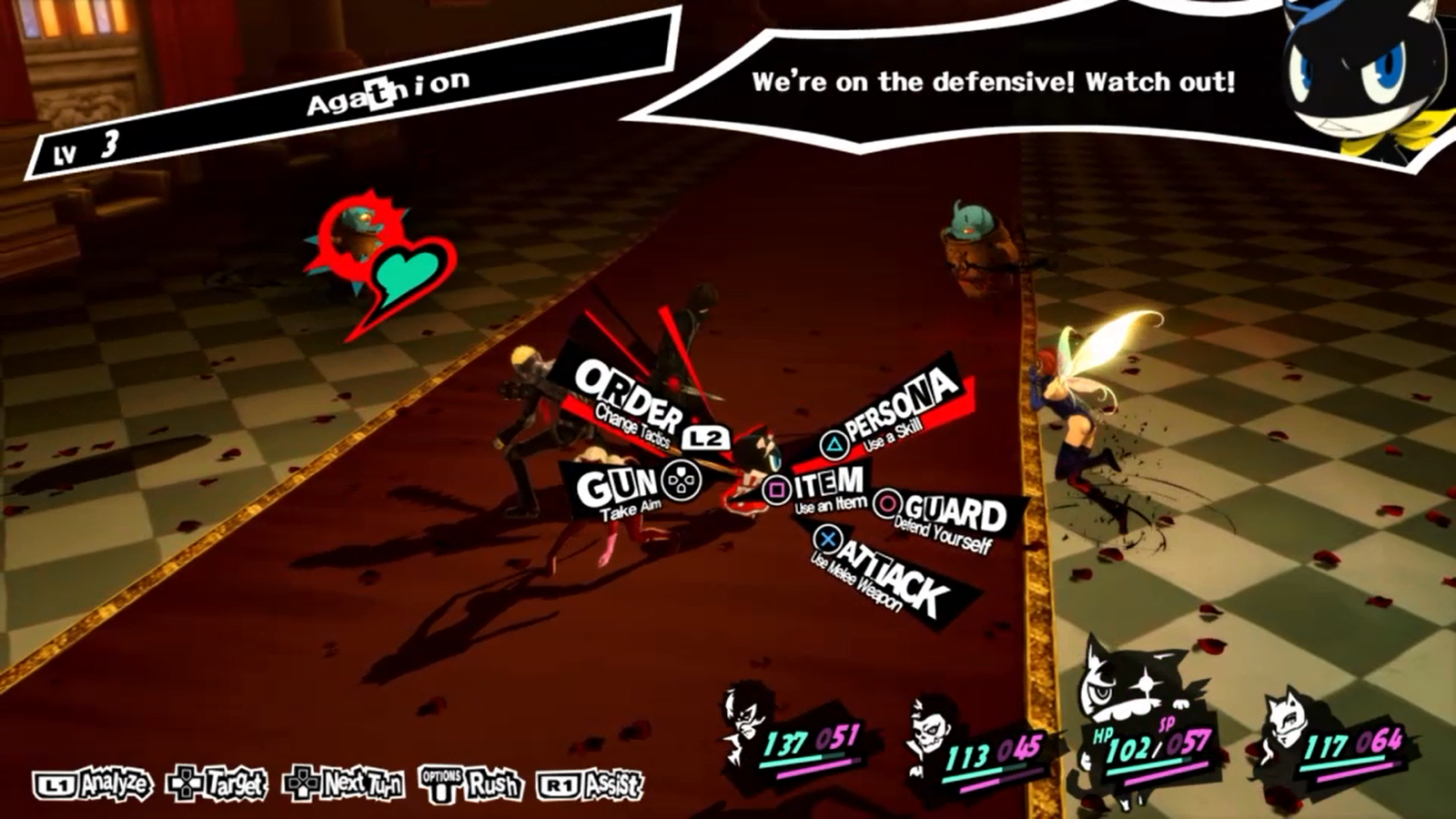 You’ll learn a few tricks to stay alive like how important stealth is. First and foremost, it’s used to keep a low profile as being spotted will raise the Palace’s security level (if it reaches 100% you’ll be kicked out), but it will also let you ambush Shadows so you can attack first. Though if the Shadow initiates the fight, your team will be ambushed instead and you’ll be put into a sticky situation. It’s also important to find the Shadow’s weakness and exploit it, while at the same time managing your SP. This not only will cause the Shadow to take more damage, but will also let you take an extra turn or pass it on (though a teammate will have to have Baton Pass from ranking up their Confidant first). 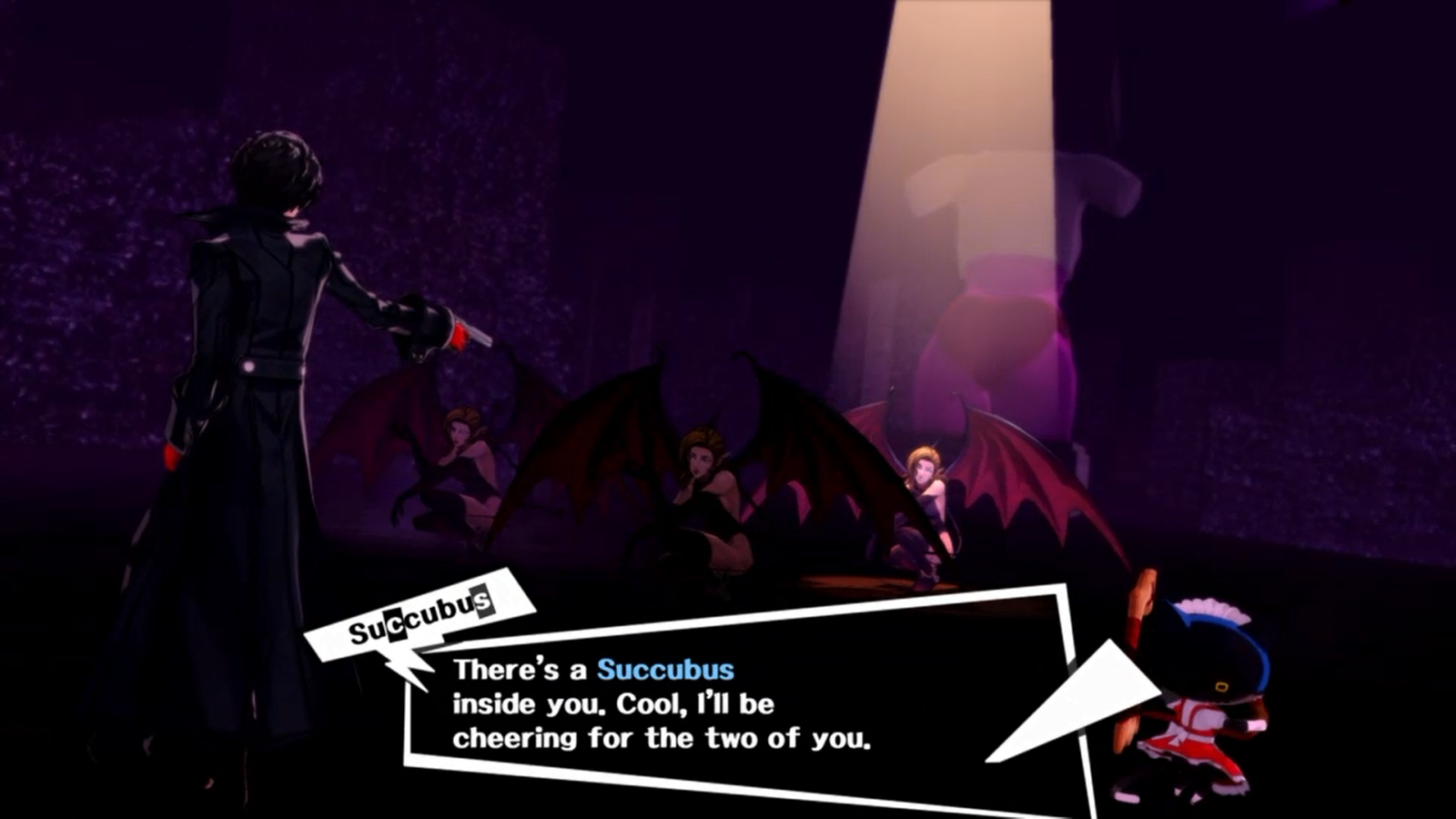 Not only will exploiting their weakness grant you an extra turn, but you can also activate a Hold Up if all of the Shadows are knocked down. Here you can go for an All Out Attack, dealing massive damage and will show a Finishing Touch screen if all the shadows died due to it, or negotiate. Negotiation can either land you some money, items, or even have them become your Persona. Though, getting them to agree will require you to be at least the same level and answer two questions that match their personality (which is pretty hard to decide even if you know what you’re doing). Being a lower level than the Shadow or causing it to be neutral towards you will grant you an item instead, while angering one with your answers will resume the battle. There are some conditions where getting a Shadow to join you easier. Certain Confidants can make it easier if you rank them up, one even letting you bypass the questions, a single Shadow low on HP has a chance to beg for mercy (though this is dependant on their personality), and already having them in your Compendium will let you bypass negotiation as well (so no worries in needing to do it all over again). However, if the Shadow exploits your teammate’s weaknesses, there’s a chance that they will hold your teammate hostage. The only way to appease the Shadow is to give them what they ask (namely HP, SP, or money). If you refuse, well you’re teammate is a goner. 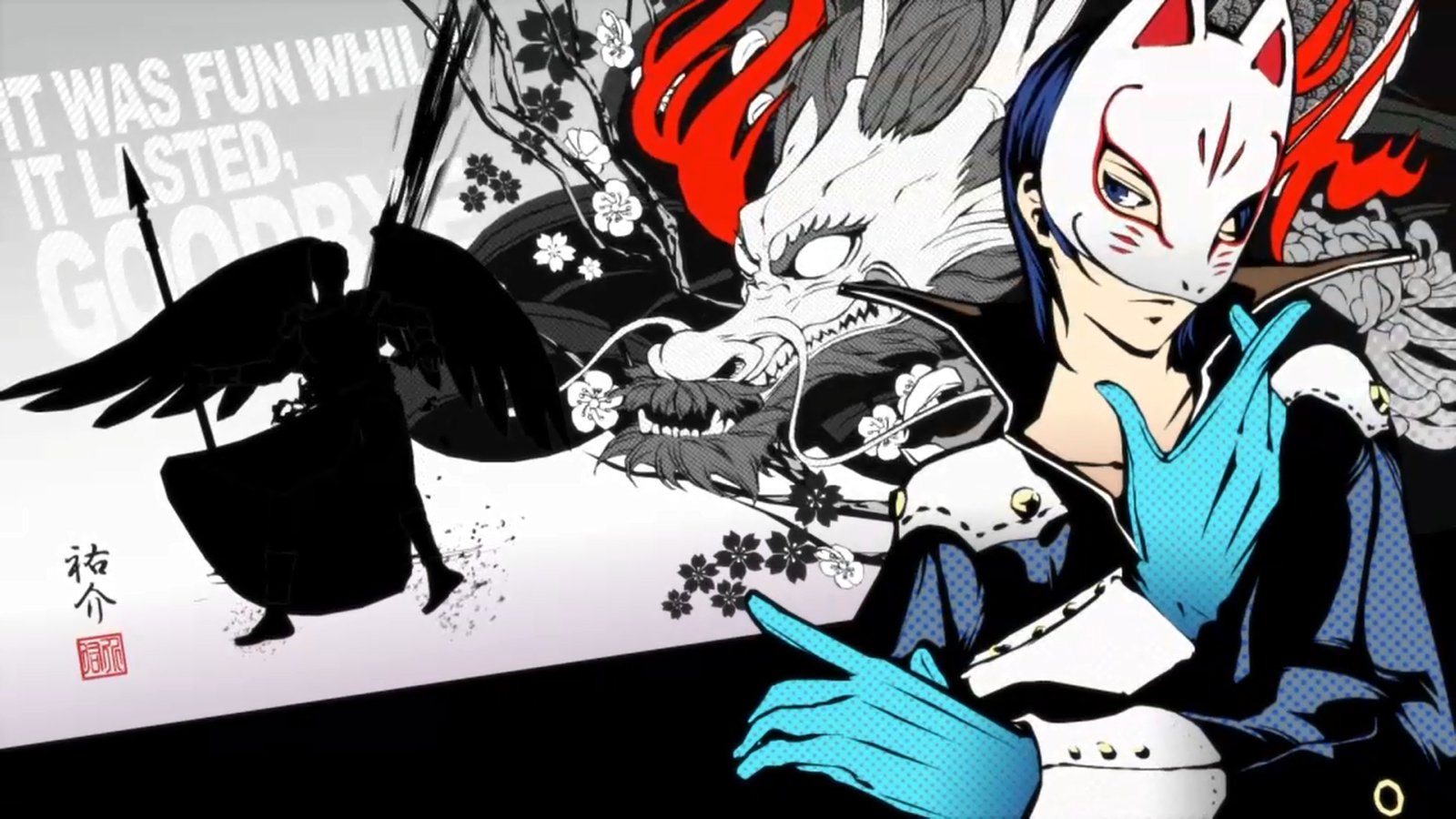 This all may seem like it takes a while, but everything is fast paced once you know where everything is. Before you know it, you’ll know the menus like the back of your hand. Also as a tip, if you’re wondering “Why isn’t there a way to rearrange the Persona’s skills”, well there is and it’s available in the Persona’s Stat page by pressing the square button. Personally, I didn’t find out till halfway through my NG+ playthrough.

After the first Palace, the game will progressively open up for you, and oh boy is there a lot you can do here. Most of your time will understandably be taken up by school, especially when tests are around the corner and you haven’t studied yet (thank goodness you don’t have homework). Managing your time is a huge part of Persona 5 and being good at it is needed. You’ll also be able to go out and do various activities that will raise your social stats (like reading or crafting tools); work to gain money and depending on the job gain social stats based on how good you did; or hanging out with your Confidants that you will meet throughout your playthrough (either being a fellow Phantom Thief or an acquaintance). Hanging out with a Confidant will let you get to know them better and get some nice benefits. However, your Confidants won’t be available all the time and several of them have social stat requirements. 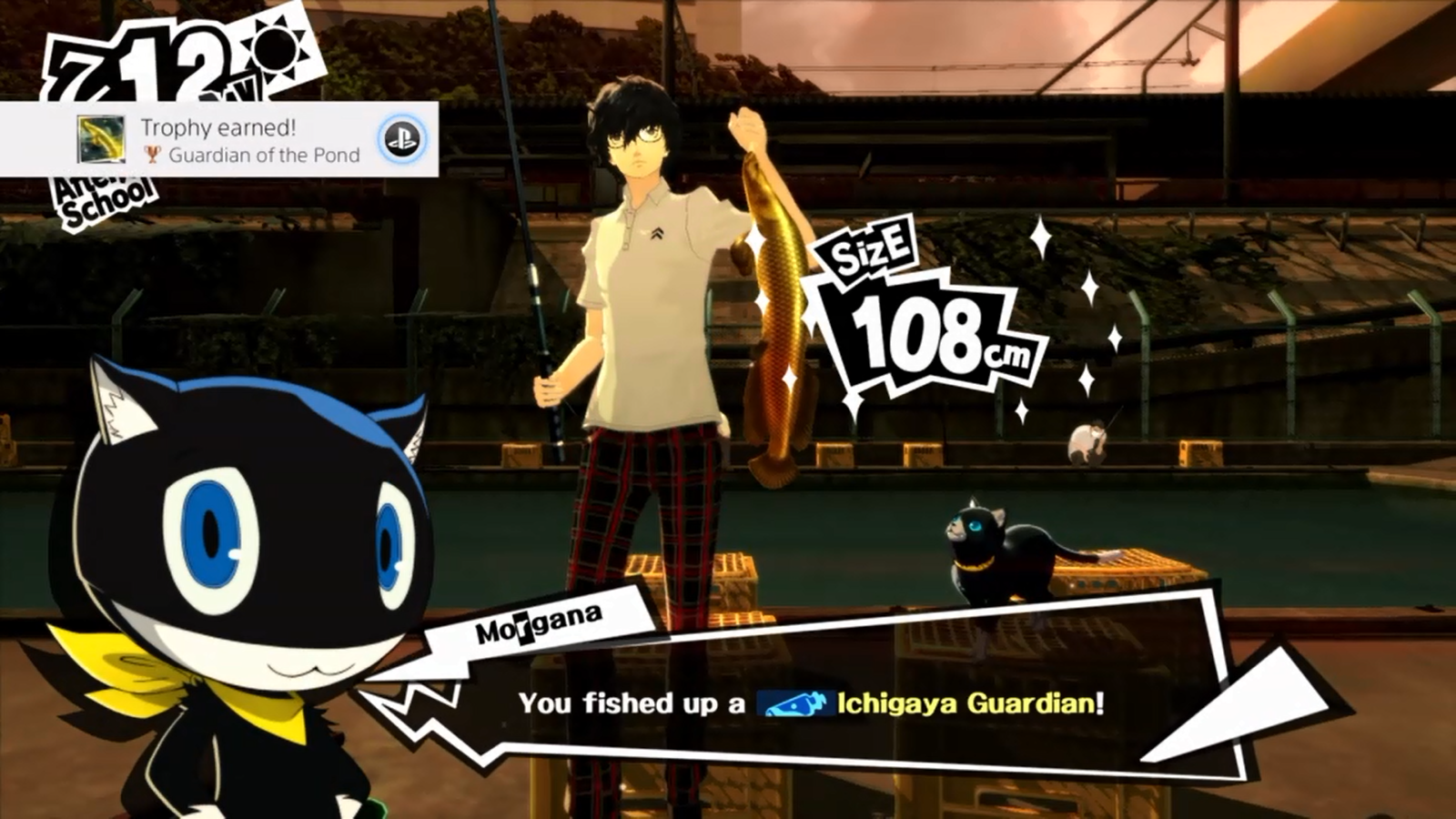 I wouldn’t stress over trying to do everything in your first playthrough. While I heard it is possible as long as you’re following a specific guide, there’s no margin of error and it just ruins the fun. While all the choices available will probably overwhelm and stress you out like it did to me, going in blind is the way to go. Go at your own pace (while keeping the Palace time limit in check of course), plan out the days as you’re playing, and accept all the mistakes you make along the way. Just have fun. Once you finish your playthrough, you can then do all that you weren’t able to and even find out what you missed in New Game+. 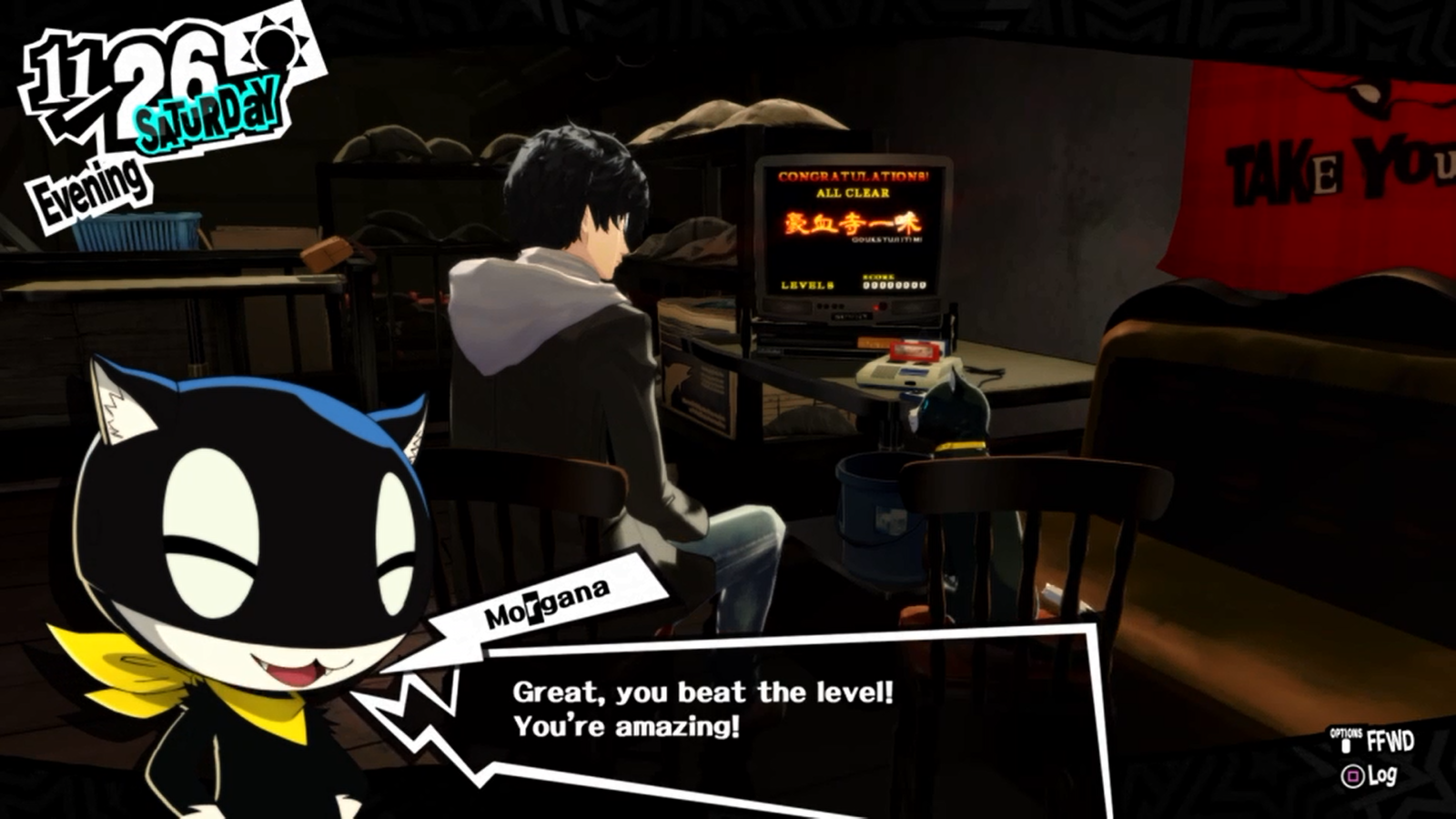 New Game+ will make it a lot easier to do everything as all your social stats, equipment (excluding consumables), Compendium, confident items, and money carries over. So you won’t have to spend a lot of time raising your social stats and you can breeze through Palaces with late game equipment if you want to. Not only that, but you also get access to a new persona you fuse and an incredibly hard optional secret boss.

While this is my first Persona game, I have heard snippets on how the previous installments were like. The most prominent is that the Palaces are fixed rather than randomly generated. I’m honestly really glad they decided to have a fixed Palace as each one was incredibly beautiful and unique, matching their respective owner. Not to mention that the stealth mechanic wouldn’t be able to work as well if the Palaces were randomly generated. 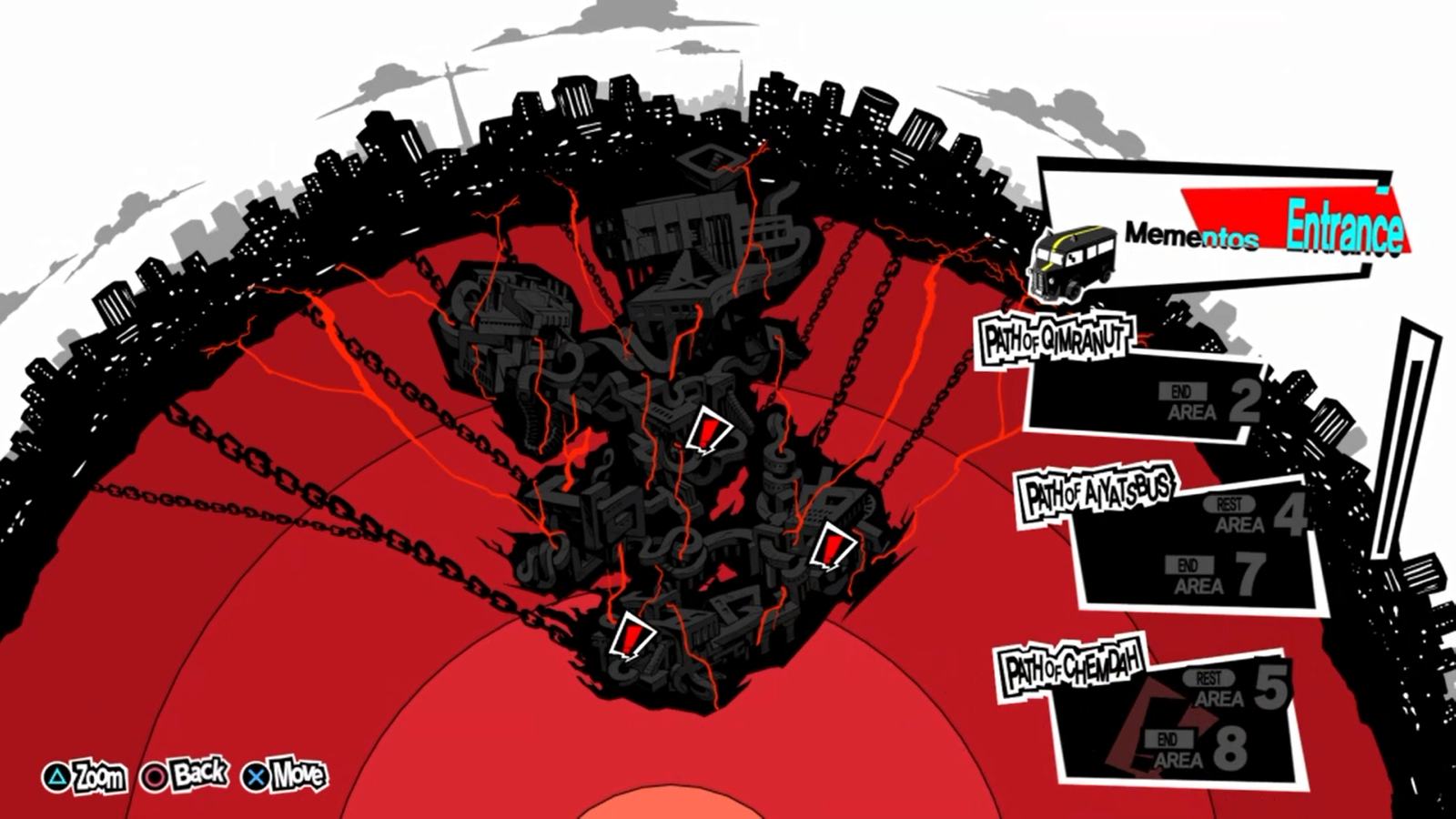 This doesn’t mean that there are no randomly generated dungeons. The randomly generated dungeon in Persona 5 are Mementos, which acts as a Palace for everyone. Divided into multiple levels that open up as you complete more Palaces (or get more well known to the public), you’ll travel through subway tunnels to encounter shadows and complete any missions you receive. More importantly, if you never managed to grab a certain Persona while infiltrating a Palace, you’ll be able to grab it in Mementos afterwards. Just be careful staying in one spot for too long.

While the characters are handled pretty well, I will say that I’m a little disappointed with how Haru was handled. I love her regardless, but she wasn’t given a chance to develop as much as the others were and her social link came late along with needing a social stat to be maxed (I was barely able to utilize it my first playthrough). It would have worked better if Haru was introduced earlier and have her social link open up more after she joins the Phantom Thieves. This way, you’ll be able to interact with Haru more, utilize her garden earlier, and perhaps get hints on her family life before she actually joins. I do hope that Haru is on the list of what will be fixed in the re-release (rumored to be Persona 5R) as Haru feels like she was added in the last minute. 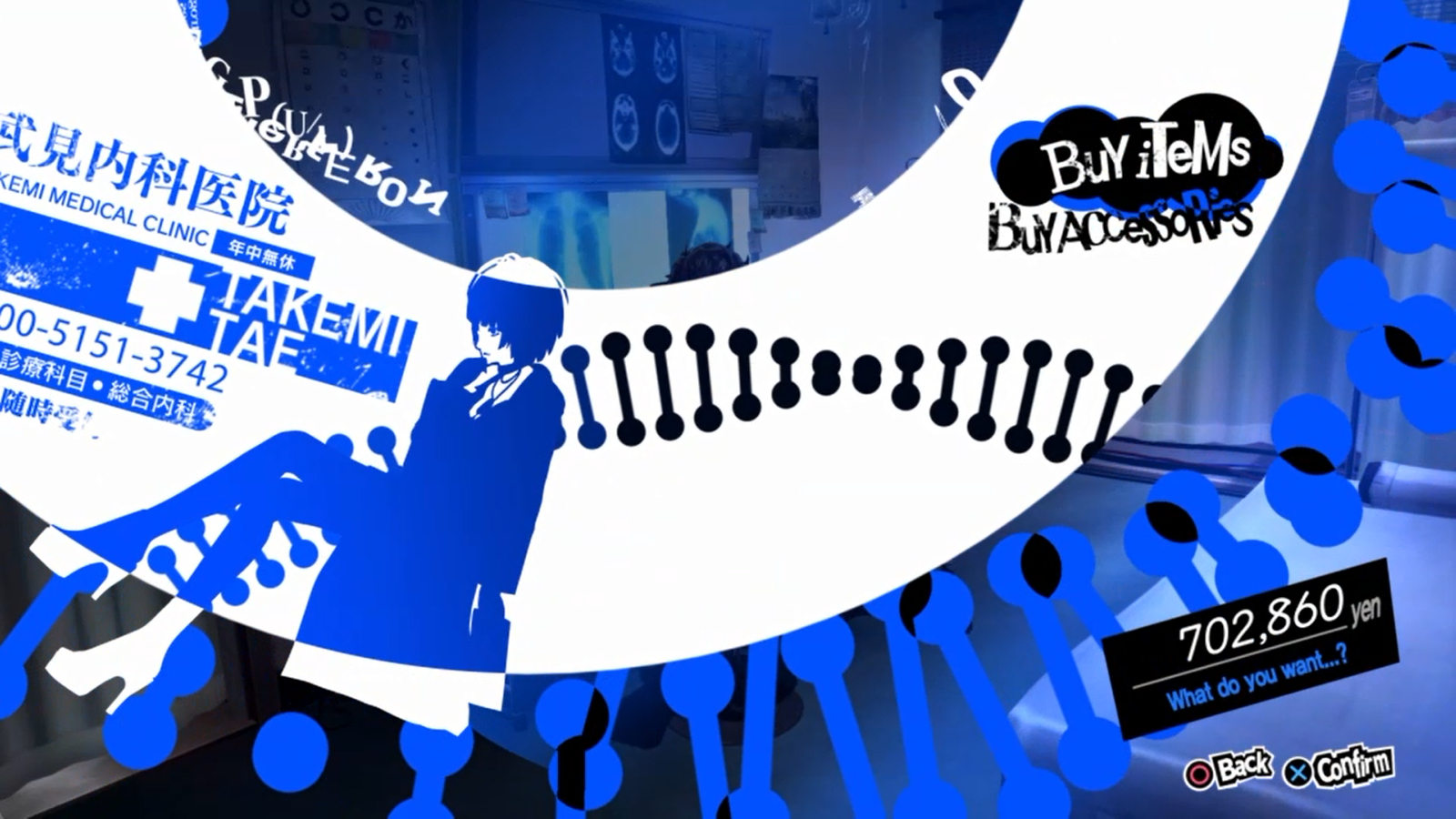 If there is one aspect that Persona 5 absolutely nailed is the visuals and the music. This game just oozes style as nothing, not even the shop menus, were skipped over. You know when a game did something right when fans are cosplaying as the battle menu (which I get, it is pretty snazzy). Not only that, but the music is perfectly nailed as well. Each fitting their respective areas and each one able to get stuck in your head. I often found myself grooving with it and even lightly singing along (especially when Beneath the Mask was playing). Let’s just say, I bought the soundtrack as soon as I could. 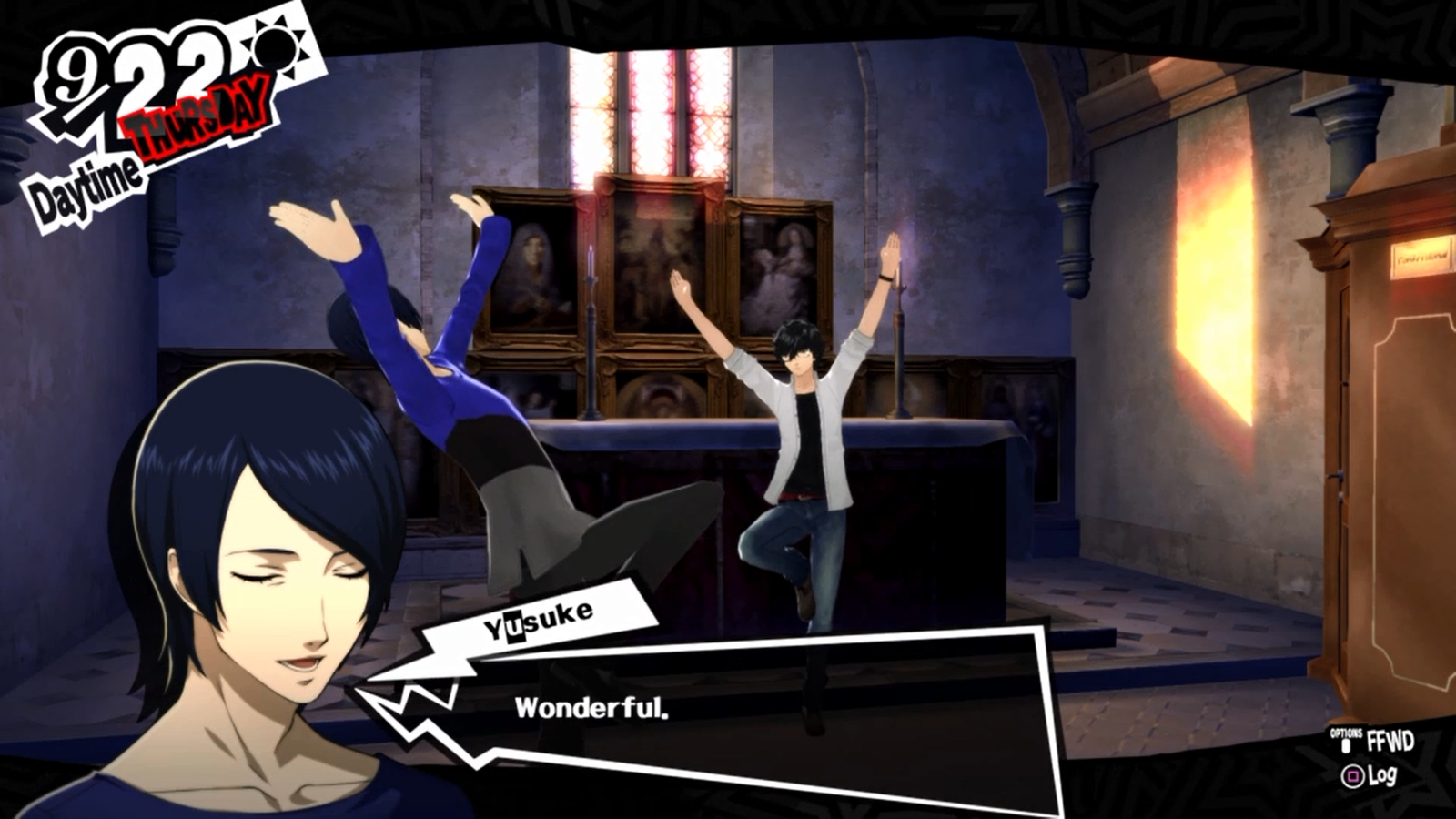 I absolutely loved Persona 5, despite how it may look due to how long it took me to finish and write this review (I got way too busy when I was initially playing it oops). Persona 5 isn’t perfect, but it’s really close. The combat is complex without being too difficult or taking up a lot of time, the story is great (despite how obvious one of the twists are), the characters are great (Sojiro best dad and Futaba best girl), and the visuals and music are absolutely fantastic. Heck, even managing your time between school, free time, and being a Phantom Thief is fun as there is a lot you can do. Even with the few flaws it has, it doesn’t detract from how enjoyable the gameplay and story is.

If you haven’t already and own a PS4, Persona 5 is a must have title. Before you know it, you’ll have around 100 hours and even more going into NG+. If you’re new to the Persona series, Persona 5 is also a great starting point and may even compel you to pick up the previous installments (like it did to me).

Now excuse me as I can finally listen to the Persona 5 soundtrack guilt free.