I didn’t know what I was missing~♡♪

Cupid Parasite follows a particular character which you get to name, but I’ll refer to her canonical name, Lynette who is residing in Los York. Lynette works at a company called Cupid Corp which, as the name suggests, combines it’s sophisticated software and their bridal advisors (which are more like matchmakers at first) to pair you with someone that they think is most compatible with you. And they’ll help you out right up to your wedding, which you can even have there. Not to brag, but Lynette is Cupid Corp’s top bridal advisor despite only being there for a month. However, one day Cupid Corp’s President, Shelby Snail, sends Lynette an ominous email that ends up worrying her on what Shelby is calling her for and if he knows her secret. 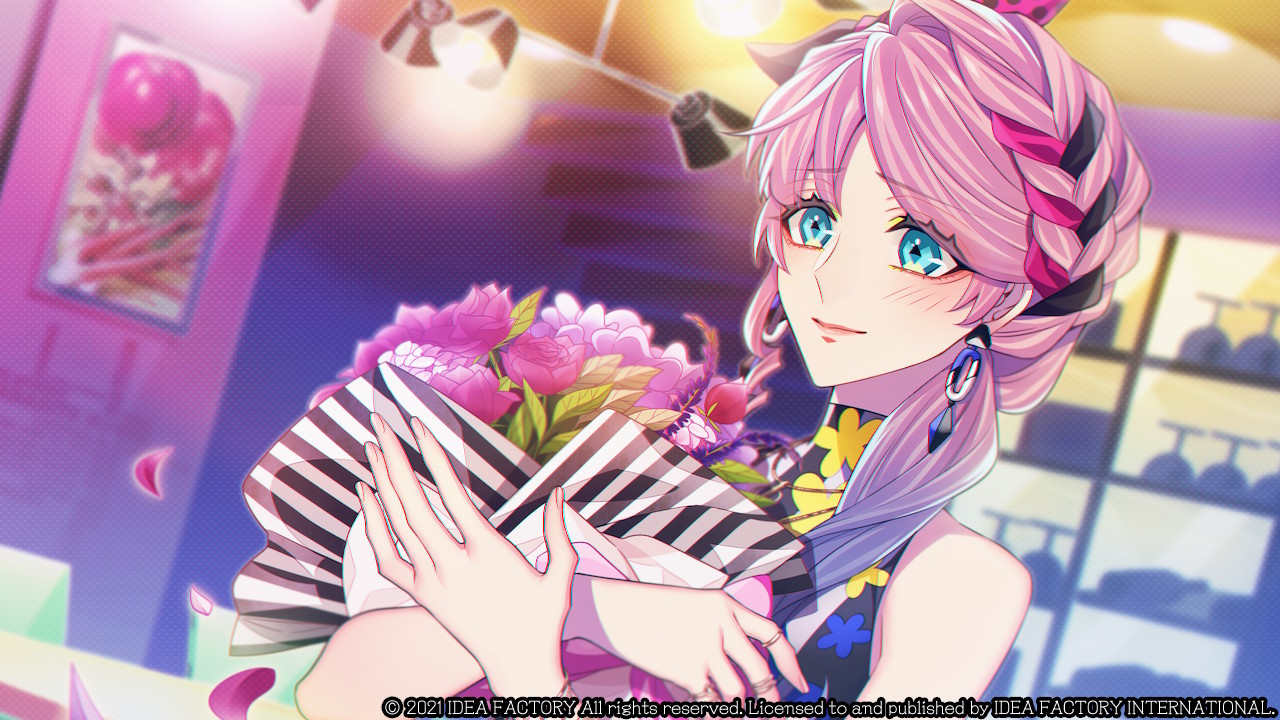 However, this secret that she desperately wants to keep secret from everyone isn’t that she never been in a relationship. Well, that is true, but not the secret we’re talking about. She is actually Cupid, the Goddess of Love, who ran away from her home in Celestia to live like a human. You see, marriage rates have plummeted and her father figure, Mars, seems to put some of the blame on Cupid not being perfect and doing the job of Cupid and Juno. Cupid also believes that humans don’t need god intervention, or at least Celestia really needs to evolve just like humans do, so she decided to stick it up to Mars by living like a human and proving humans aren’t as foolish as he thinks by matchmaking without her bow. And after finding out about Cupid Corp, she aimed to climb to the top before going back to Celestia and throwing her achievements in Mars’ face. 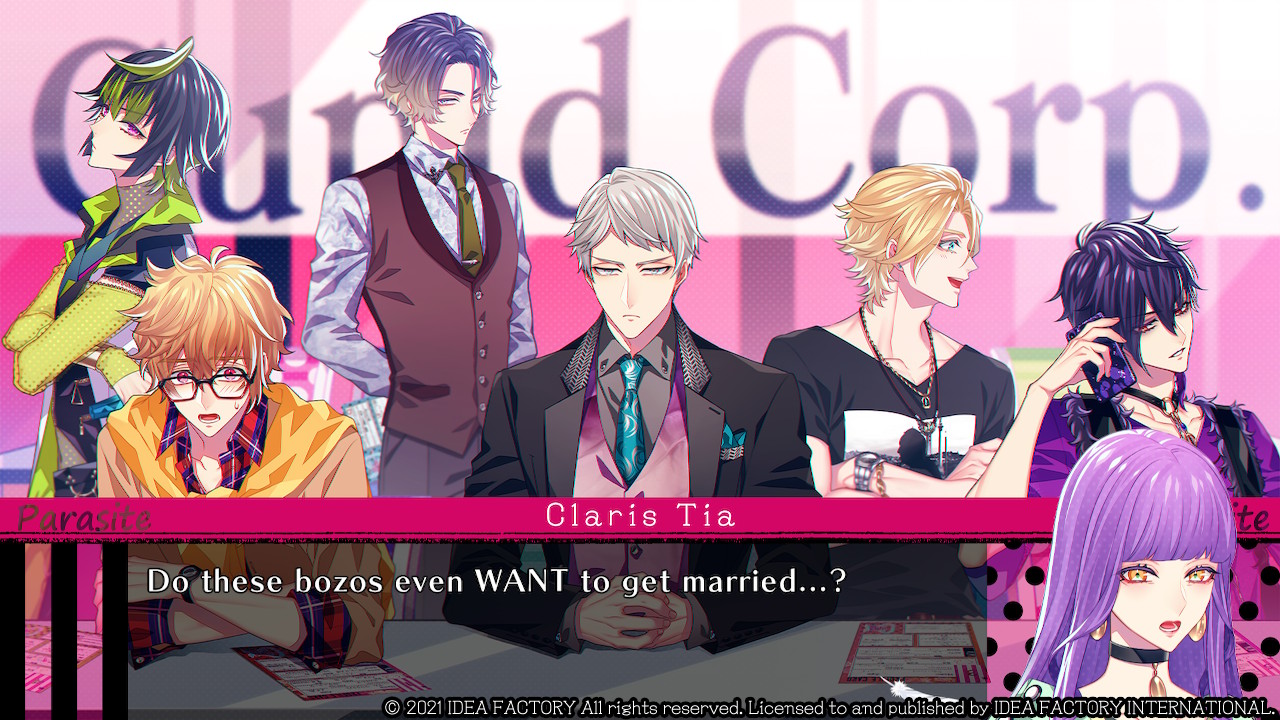 Anyway, that email launched what would give her the promotion she needs before returning to Celestia… but she has to deal with the dreaded Parasite 5. And while Lynette doesn’t know this yet, this may also cause her to fall in love with one of them. The Parasite 5 is Cupid Corp’s most troublesome members, even when a bridal adviser is only handling one of them, and well with Lynette being the top bridal adviser she has to deal with all of them at the same time. There’s Gill Lovecraft, who was actually Lynette’s first friend and who taught her all things human and is the Lovelorn Parasite as he’s still caught up on another girl. There’s the Prestige Parasite who totally isn’t Shelby Snail that is dedicated to staying SS Rank, needs to get married to hide the fact that he’s single, and wants someone who is either as much of a workaholic as him or is fine with him not being there for his wife. Not to mention that to keep his secret, he’s using a representative go in his place for dates. There’s Raul Aconite, a famous Sillywood actor, who is the Obsessed Parasite and is absolutely obsessed with mythology and will overwhelm his dates with his knowledge. Not to mention every conversation will in some way involve mythology. Next up is Ryuki Keisaiin, the Glamor Parasite, who only sees beauty and will not recognize you as human if you fall underneath his beauty standards. And lastly, Allan Melville aka the Thieving Parasite who is super flirty and seems to only be interested in women that already have a boyfriend. And well, knowing that he’s actually an incubus doesn’t help.

To make things worse, Cupid Corp managed to land a reality tv five episode special surrounding the Parasite 5. Where they and Lynette will live together in a house where she will be filmed on how much progress she makes with them. I can feel how tough this endeavor is for her, but reading through the Common Route was really fun and you’ll soon branch off to the individual character routes. 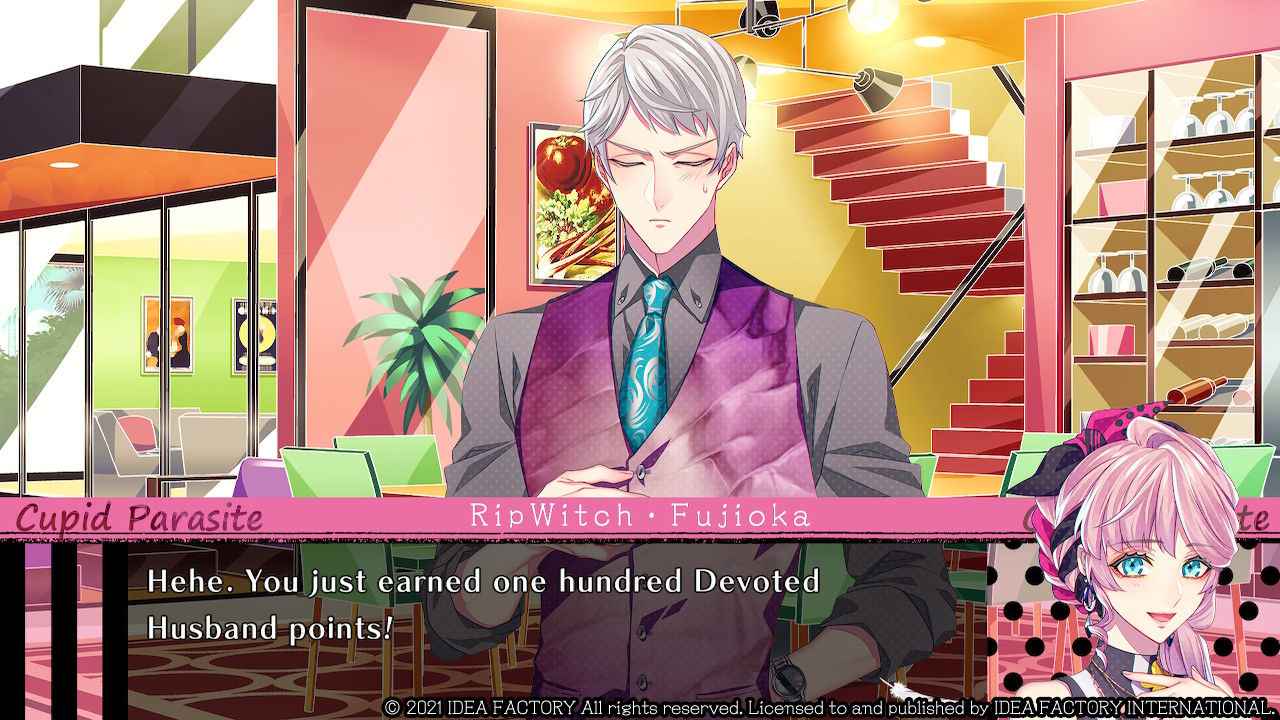 Honestly, they do have redeeming qualities hidden underneath their terrible qualities that they can’t (or won’t) improve on. They actually do come out during the Common Route, but their worst qualities quickly pop back in. Luckily, Lynette is not someone you can just push around. For example, Gill still can’t get his crush out of his head, won’t stop talking about her to his dates, and is literally a step away from being a stalker; but it’s obvious that he is very devoted, wants to spend a lot of time with his significant other, and will give up anything for his love. And while Ryuki is really rude to those that don’t meet his standards, he actually does have a lot of respect for his grandmother and is a master at finding the perfect makeup and outfit combinations for someone. While romance between Lynette and the Parasites build over the course of their individual routes and wasn’t the main goal for Lynette, it was really nice reading the situations Lynette finds herself in, seeing the Parasites improve themselves with her help, and Lynette slowly falling in love with them.

And not only will you get to learn about the Love Interests, but also Cupid as we see how she is when paired with the different guys and even her background. 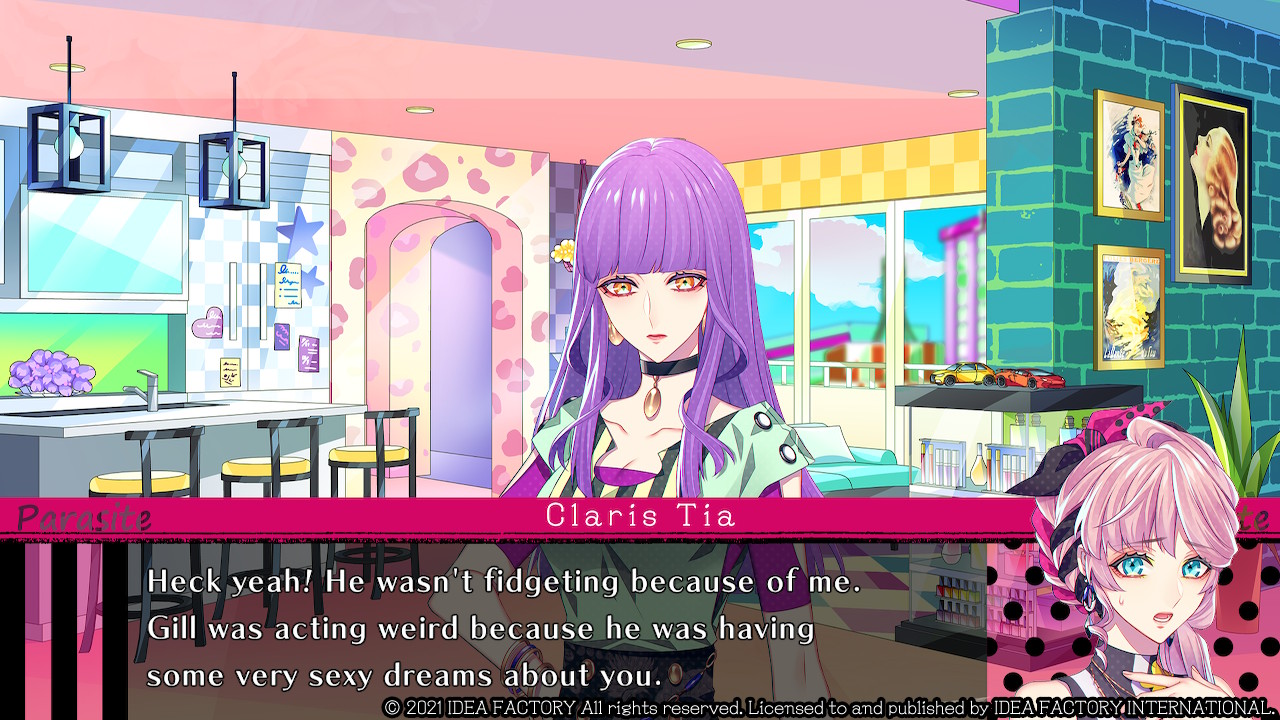 Each route has a best ending, a normal ending, and a couple bad endings sprinkled in. These are based on the choices you make, which some do give you hearts which accumulate into points. Some bad endings are based on choices, while some are based on your love points (which you may have to go back into the Common Route to get enough points).

By the end of my playthrough of all the routes, I ended up really liking all of the love interests here. While I didn’t really see myself liking Ryuki or Raul (though Raul’s love for mythology is a bit contagious), I ended up really liking them as their route progressed. Not to mention all of them are pretty fun to read through and I couldn’t stop smiling as Lynette and the love interest have fun, bond, and improve themselves. I have to recommend doing Allan’s route last though as it is the best route, and it has a lot of lore in it. I know Allan is tempting, I was actually going for his first route before I was actually put into Gill’s. but trust me do his last. 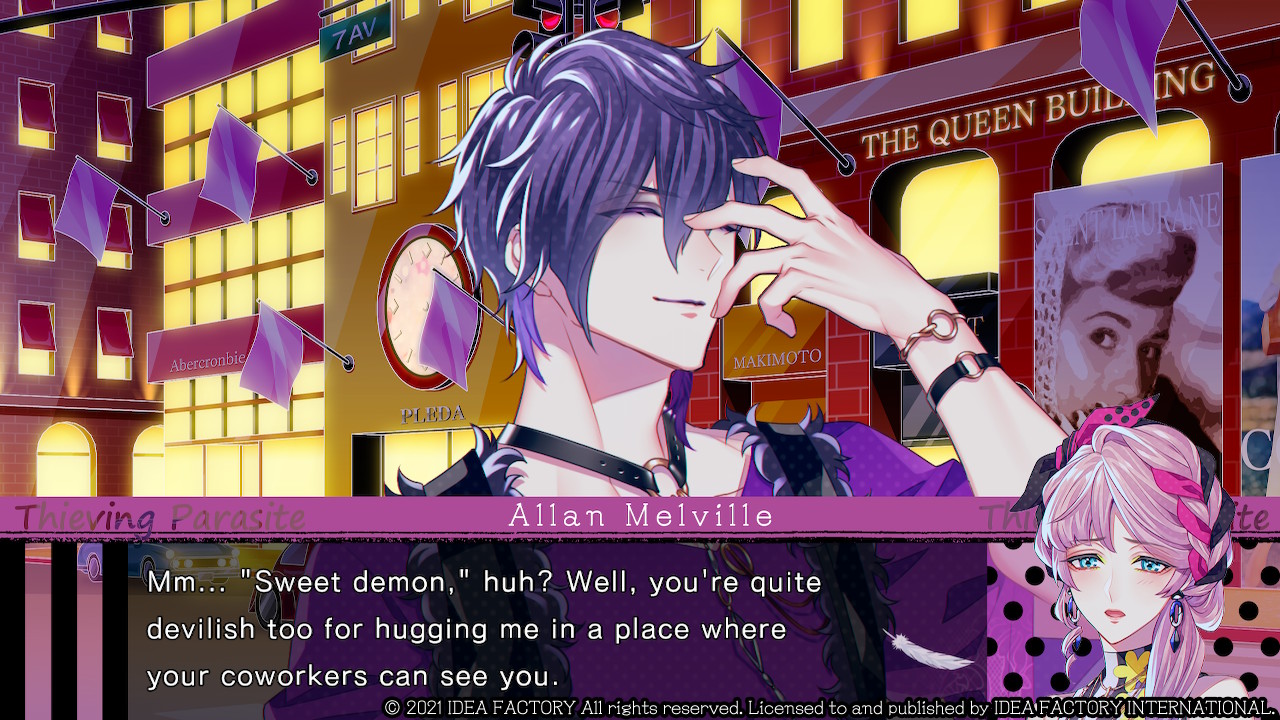 One thing that I was quite surprised about was how quickly some secrets were revealed. Like with Allan being an incubus (which isn’t a spoiler if it’s revealed in the first hour) or that Gill is hung up on his crush on Lynette. Shelby Snail’s secret of being the Prestige Parasite wouldn’t make much sense keeping it as a secret, but keeping it a secret from Lynette did bring on funny moments (including when Lynette finally finds out). There are secrets that are truly hidden though, and at most will get hinted at in the other routes, so don’t worry about every secret being immediately revealed.

Despite how much I really enjoyed Cupid Parasite, it does have some problems. Of course, this has the usual small translation/grammatical mistakes that accidentally gets looked over here and there, but three routes are highlighted where most of them are in. Raul’s is one, though I didn’t find it too bad. It has more mistakes than I noticed in the Common and the other two routes (I played in order, so Gill and Shelby’s). Ryuki’s is worse, but it’s still understandable and wasn’t as bad as I was envisioning based on what others were saying (like it wasn’t so bad it’s unreadable). Both of these do also have text overflow and labeling a dialog box to the wrong character as well. There is also the Secret Route, which is bad as well. I really like the Secret Route, but it not only has the translation and grammatical issues, but also the text will overflow out of the dialog box, the text isn’t properly layered, and there are three dialog boxes where the text is put as the header, which will cause a crash if you try to load that dialog box in the backlog. 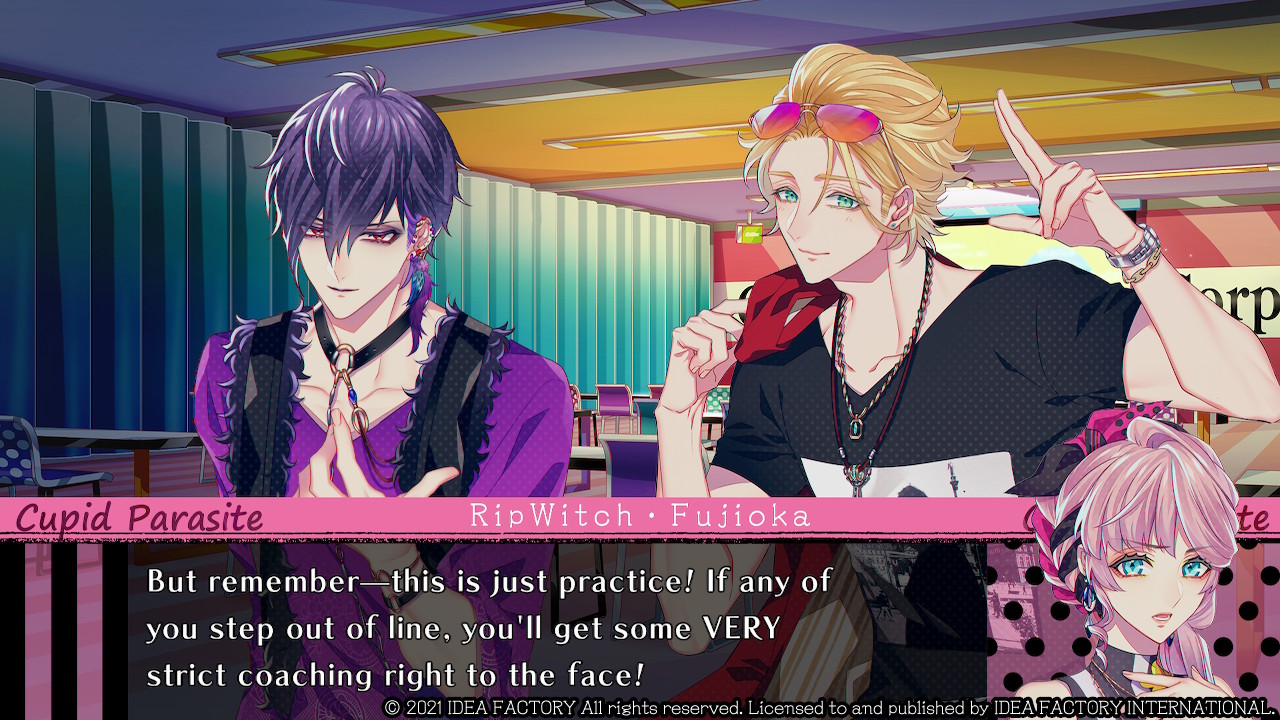 Granted, I’m pretty lax on this aspect as I’m more or less fine as long as it’s not too distracting and doesn’t detract from my enjoyment of the game. The worst for me was the Secret Route, but by that time I was at the end and I was still enjoying my time with it. Though, for those that are bothered by a lot of localization mistakes, this is important to know. There is a patch planned to fix these issues, though it’s been pushed back since, so we will be getting a fix for this eventually (and hopefully soon).

I loved the colorful aesthetic this leaned into and the character designs. Well, except Shelby’s stupid vest as I feel it would look better with a unique pattern as the pink really pops but the plain wrinkled-looking pattern lowkey bothered me; certain outfits Ryuki designs, and I did wish the game used different patterns than mainly dots. The soundtrack also really fits, both with the aesthetic of the game and the characters or locations that it’s tied to, and ties everything together; with my favorite tracks definitely being the opening theme “You Can’t Hurry Love”, the ending theme “Magic Hour”, and “Top Bridaladvisor”. 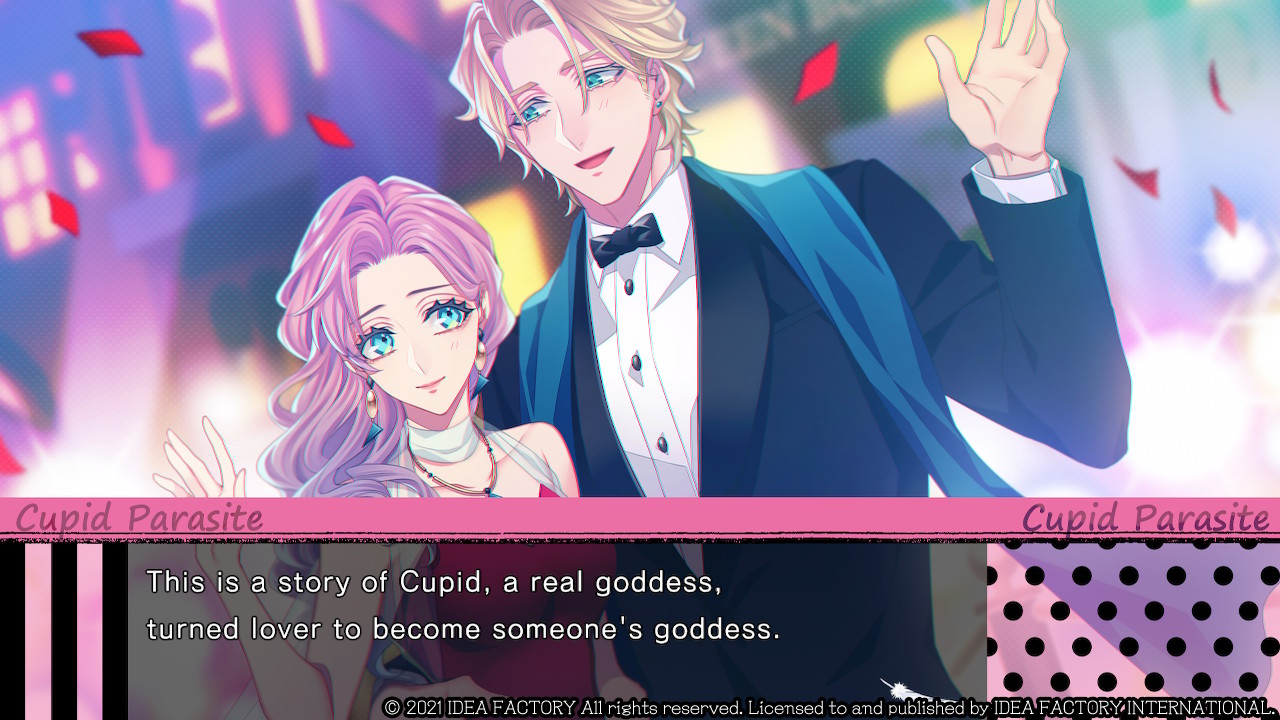 I can’t believe I hesitated so much on whether to play Cupid Parasite or not. While there is localization issues and some small aspects that I didn’t like, I absolutely loved my time with Cupid Parasite and I just wanted to keep playing, er, I mean reading (if only we didn’t require sleep). It was a lot of fun reading through everything and even though Allan is my favorite route, I can’t simply rank the others other than having it a five-way tie for second place. It was a delight having Lynette/Cupid as the main character, I really liked how the love interests were handled and their interactions with Lynette, I loved the aesthetics and the soundtrack, and I loved how Cupid Parasite didn’t take itself too seriously. There’s no doubt about the fact that Cupid Parasite is now my favorite otome game I’ve played so far.

Due to the issues Cupid Parasite has, I had to think over my rating. I loved Cupid Parasite, but the issues it has would bring down anyone’s score. However, keeping in mind that Idea Factory has acknowledged the problems and does have a patch planned (albeit, pushed back to maybe before 2021 ends) and my enjoyment didn’t suffer too much, I think I can give Cupid Parasite an Autosave with a clear conscious. I do recommend keeping an eye for the patch before purchasing, but if you decide to get it before it comes in, you’ll still have a great time.