Punch your friends and avoid deadly traps to prove that you are a knight worthy of the crown.

Obstacle courses filled with dangerous traps seem to be an entire subgenre of party games, calling to our inner masochist. Big Crown: Showdown is a bit tamer than its fiendish brothers, replacing sadistic traps with an emphasis on interaction between players. I played it online with fellow Save or Quit writers Aythadis, Hotshot, and the occasional guest appearance of JimDeadlock. Here is what we thought after an evening trampling on our friendships.

Big Crown: Showdown’s first impressions weren’t very good. The first launch inevitably crashes, a second try seems to work, and then there is a choppy intro cutscene leading to a clunky menu. It’s not possible to rebind keys, or practice against bots: the only two choices are to play the game locally or online with (backstabbing) humans. The person who opened a lobby creates a playlist by choosing among the 15 levels available, and then our little knights get ready for a deadly race. And what a cute race! The graphics are simple, but pretty and the levels are bursting with details such as statues or background bystanders, supported with cheerful music. 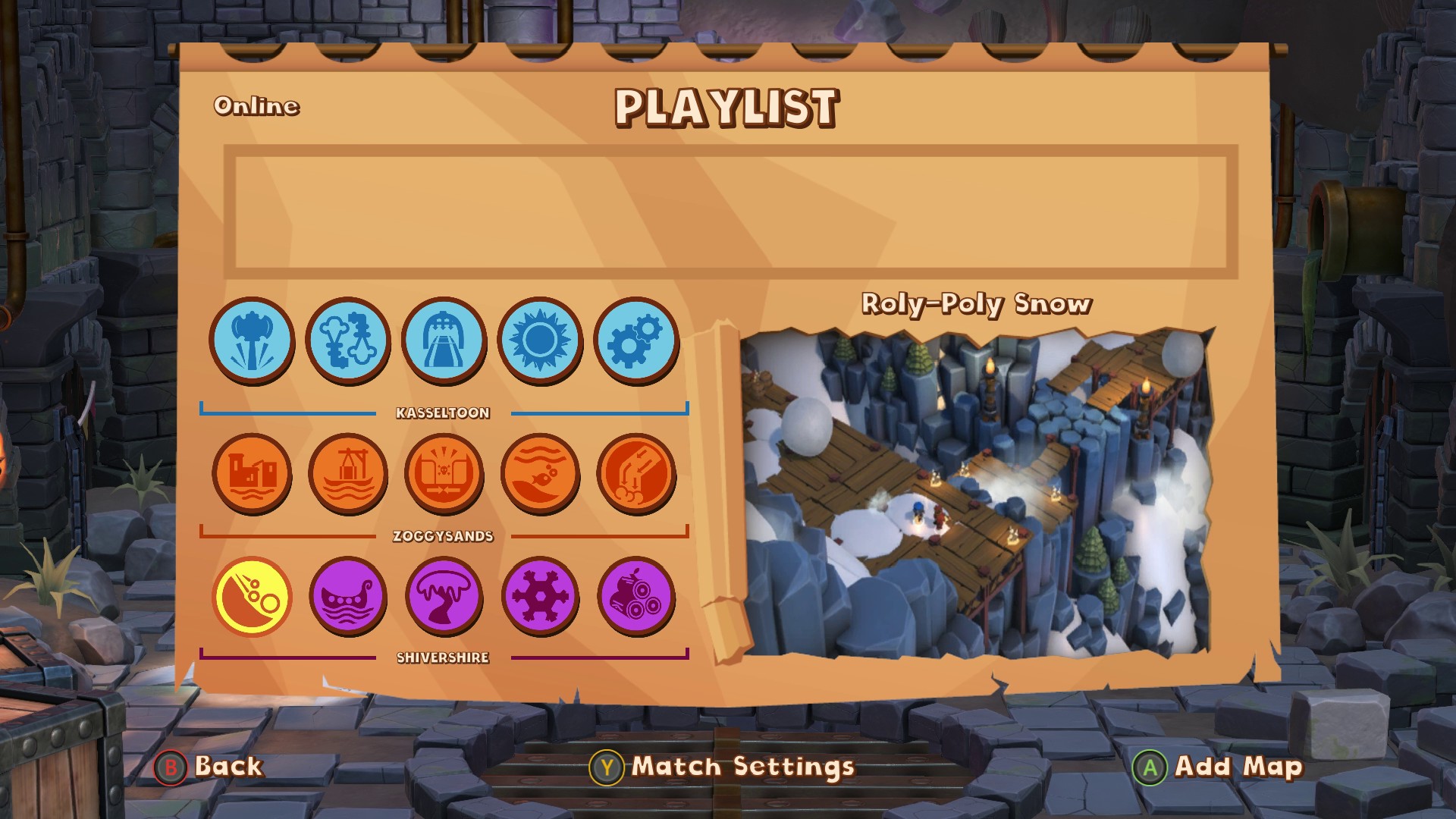 The camera view is auto-scrolling, there is no point being first. The goal is to kill others to score points, and hopefully not lose your own 5 lives. At the end of a circuit, jumping into a portal will add all extra lives to the score, and the first to 20 wins. To kill other players, pressing the X button will trigger a punch that can send them into dangerous areas, while holding X will charge a stronger dash-punch. Once you are charged there is an auto-lock on a nearby player, which is not exactly desired. In order to save yourself from a punching maniac, you can either block with RT or jump above the menace with A and laugh as your friend propelled themselves outside the play area and died in shame. The last part of a level forces the knights to stay in an arena until a portal opens so that we can cash our extra lives, and this was consistently a great moment as we took this opportunity to battle it out or work on a quick escape. 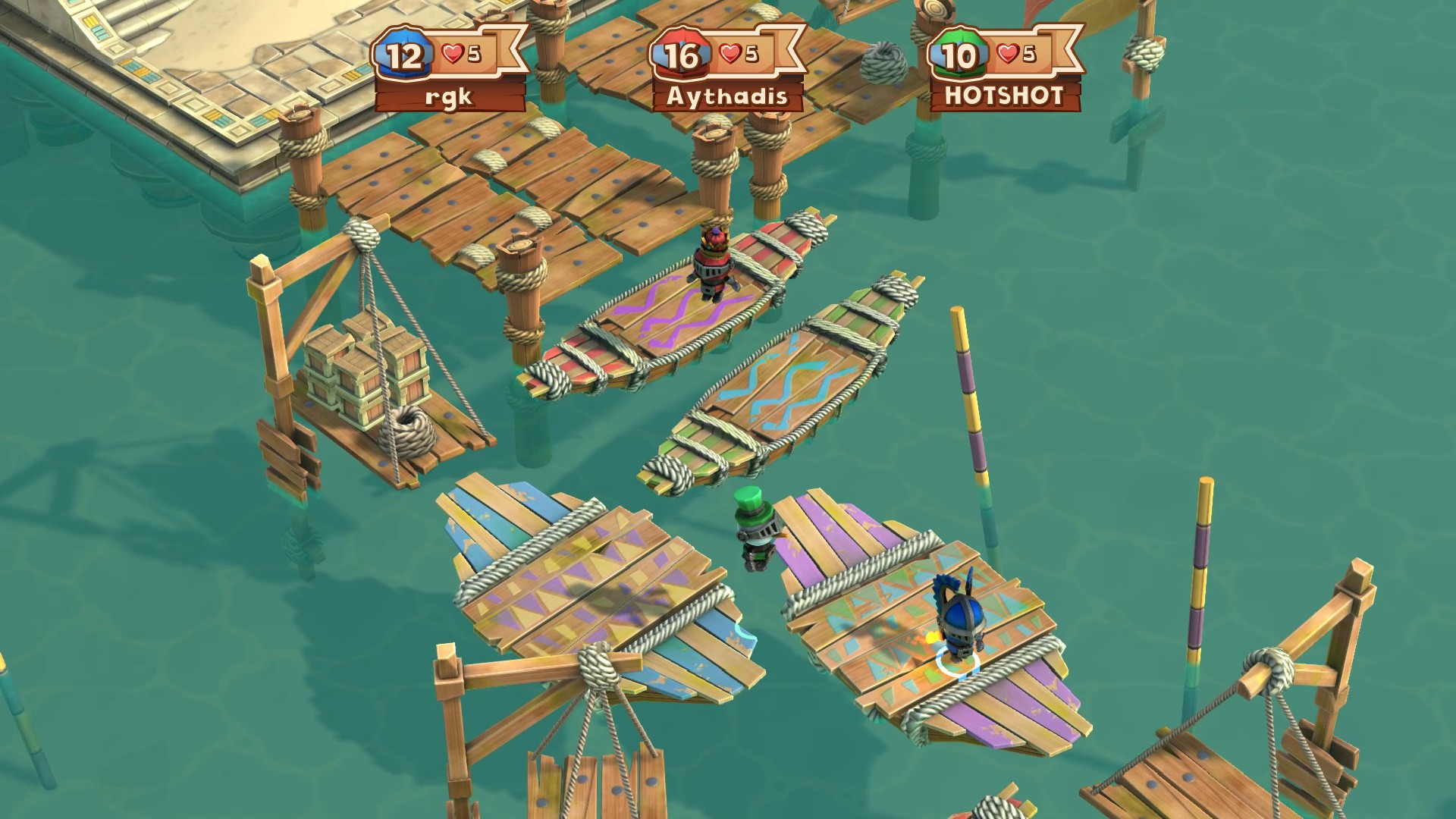 There are a few hiccups, such as a bit of lag or some collisions issues (defending sometimes does not work as intended), but we were not taking ourselves too seriously and the competition was in good spirit; we didn’t pester against the game. What was far more annoying was the respawn system: players are hanging above the level with balloons, but they can’t control their trajectory, which would sometimes make us fall directly into traps or far from the boat that we should have come aboard. I understand that it might have been worse if the players had full control over their trajectory and missed their landing completely, but still, the current system was an occasional source of frustration. Another flaw is the lack of feedback from most actions, there are no satisfying sounds when punching a player or a chest and collecting coins (the current sound is barely audible). Finally, we were disappointed to see that trapping someone (messing with the platforms) would not yield kill points, it simply counted as a suicide. 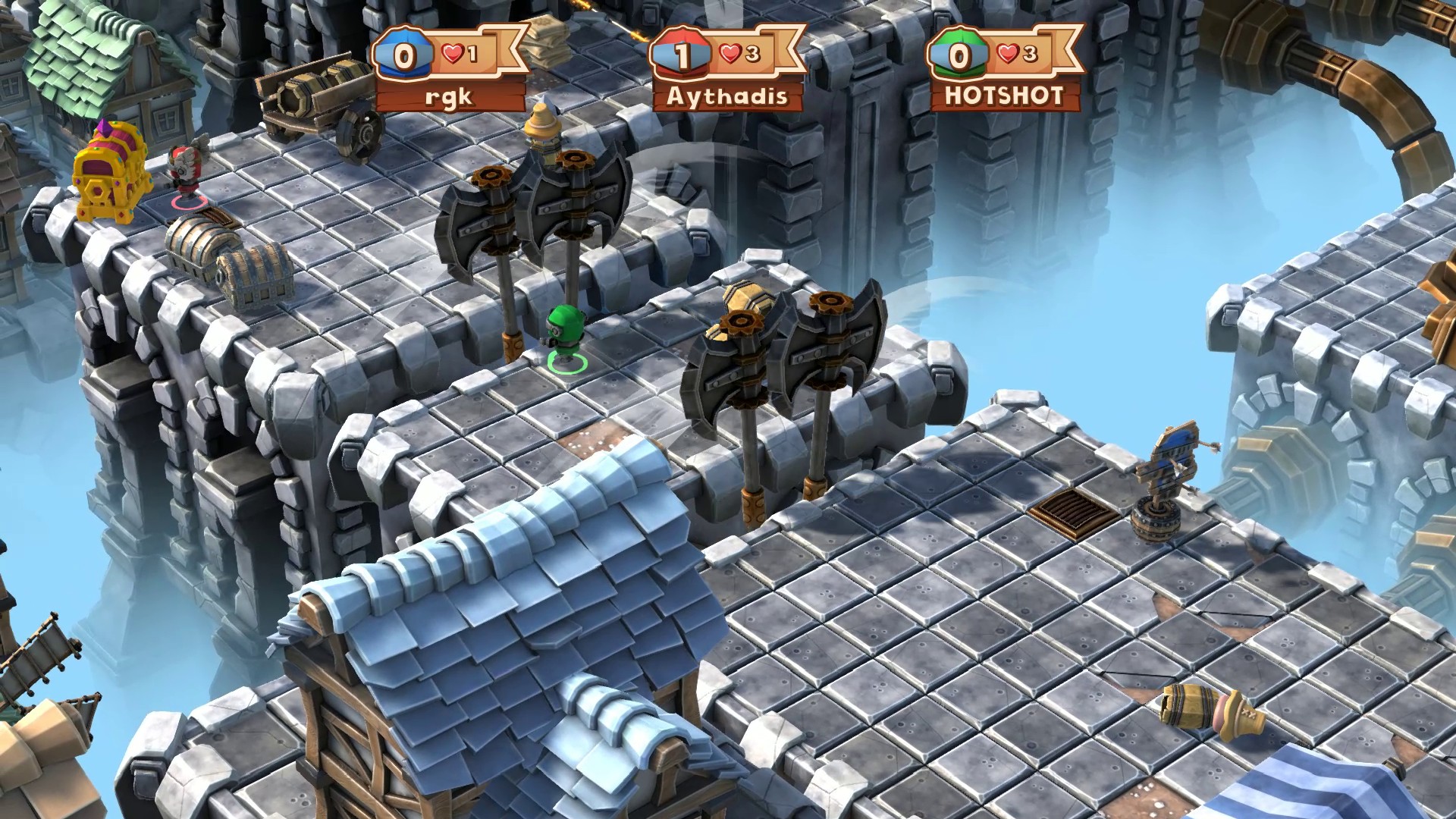 Overall, it’s quite easy to grasp and pretty accessible, although the top-down 3D platforming can sometimes be confusing with its perspectives and gaps. The first world with steam obstacles is way too easy and will only be selected for beginners. The ice world has some nice rides with moving boats, but the snowballs could have communicated better where they will land. The desert world was probably my favorite, with rising waters. Three environments with lots of identical traps is actually not much, and we had seen everything in under less than an hour. My fellow knights suggested that a lava world on top of the others would have been a hot idea, and I agree. 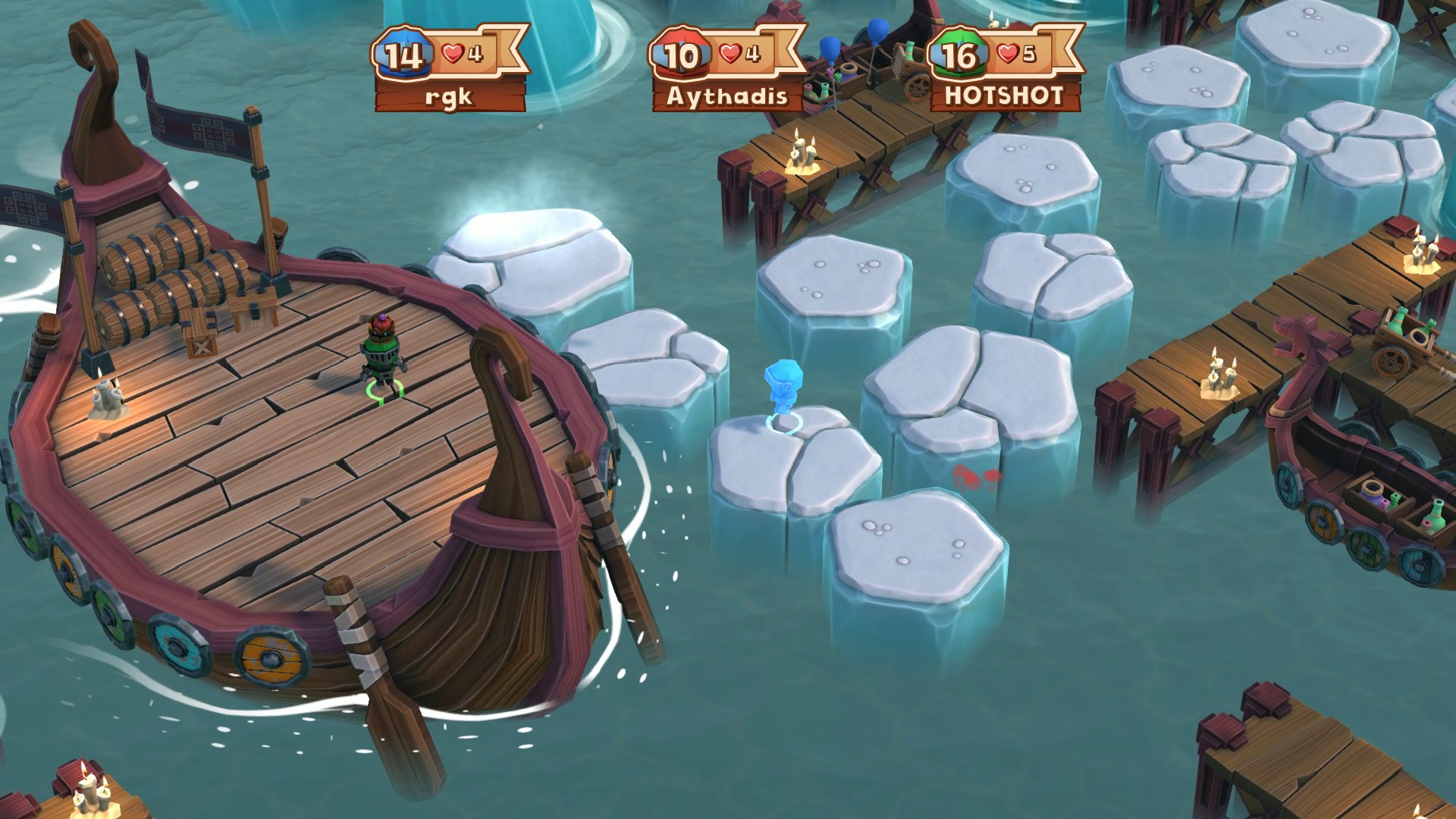 However, even if there was more content, this probably wouldn’t extend the game’s life expectancy to more than a short evening. It’s a bit too simplistic to get us hooked, even though we had fun. We did laugh many times, we were exhilarated after a crazy comeback, and we had a pleasant time with the game. So… mission accomplished, it fulfilled its purpose as a party game. But this is not a game that you will come back to often, it’s a bit pricey in that aspect, and unlockable hats won’t change that fact. There are way too many hats and you only get a few per hour, this is truly an unwarranted grind. It would have been better to have them all unlocked straight from the beginning. 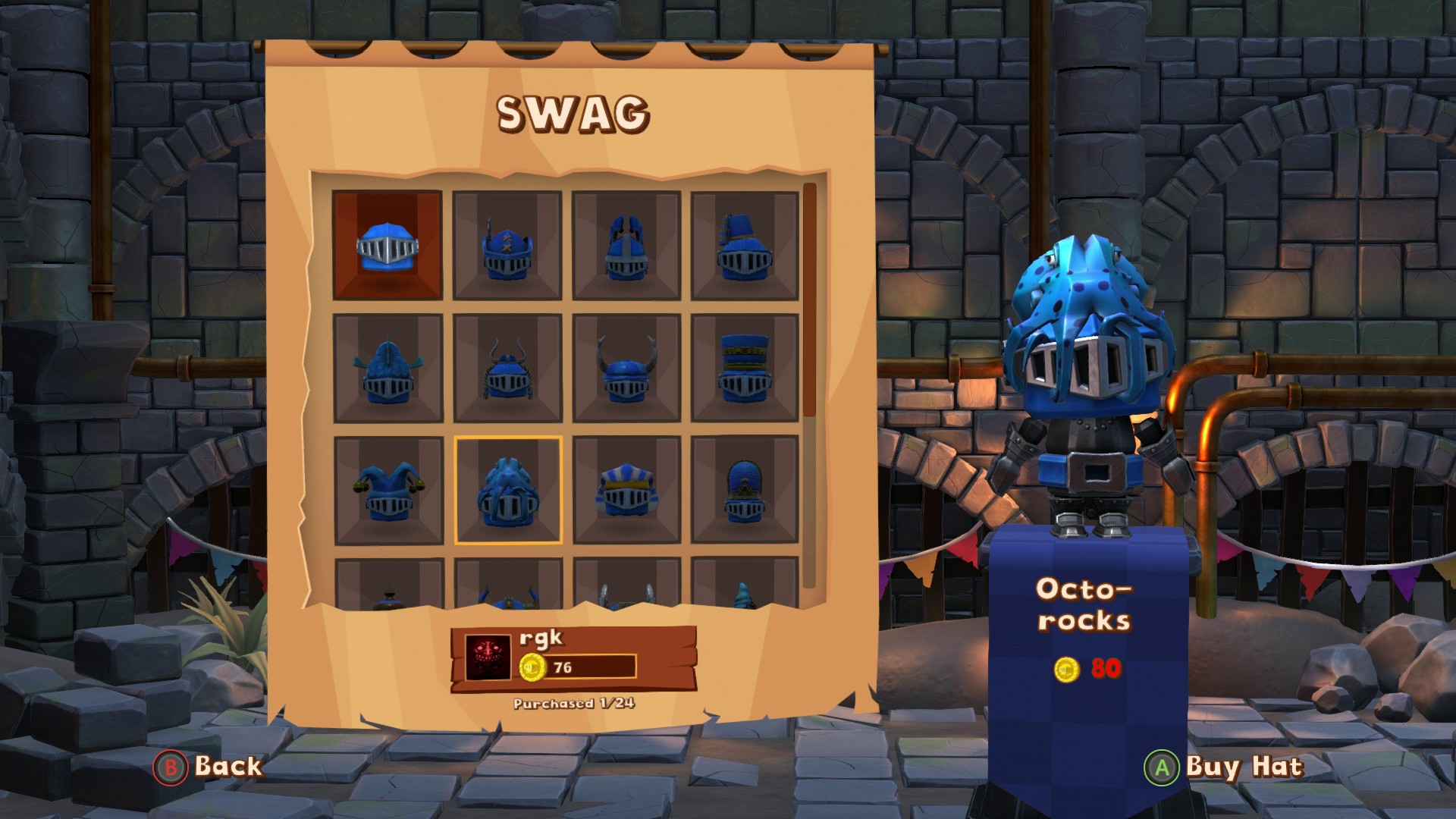 Big Crown: Showdown is a casual party game that will put a smile on your face for an hour or so, and might trigger you to swear at your friends when they nastily push you in a crusher. The flow of each level is good, and the game understands well that it’s gloriously fun to let players kill each other. It can even be played online! We laughed a lot and had fun, that’s the most important thing that a game like that can deliver. There are rough edges, but they aren’t too impactful. However, there isn’t all that much to do or see, the traps are mostly too easy to navigate, so you should be aware that it’s a disposable experience, and you should only get it at a discounted price.