A modern shooter that excels at gunfights.

For the past few years, indie developers have gone back to the roots of the FPS genre and released games inspired by DOOM and QUAKE, as if most (if not all) evolutions since then were just unnecessary fat added to an otherwise perfect formula. And yet, another pinnacle of the FPS genre appeared in 2005: F.E.A.R., proving then that modern games could also be fun to play, that they could deliver new shooting and movement sensations. With Severed Steel now and Trepang2 soon after, it looks like we are finally seeing F.E.A.R.’s babies come to life!

The Right Way to Play

When I started playing Severed Steel, it took me a while to get into the game, because I was playing it wrong. While the presence of a slow-motion button to feel like a character in The Matrix can be pretty cool, I tend to prefer a fast pace in my games, so most often I do not activate anything that slows down my experience. And I kept being killed over and over by the very reactive enemy squads who put an end to my frail life with only a couple of well-aimed bullets. I gradually learned that all the extra movements options, also called stunts (I will come back to that later) granted temporary invincibility, but that wasn’t enough, the movements were messing with my aim and I was forced to activate the slow-motion. At once, I started getting a few more kills before dying, but I was pestering against being forced to go through so many hoops and press so many keys just to kill someone. When exploring the options menu, I discovered that it was possible to automatically trigger the slow-mo during stunts without having to press an additional button, and my fun in Severed Steel finally took off at that moment. And what joy it was. 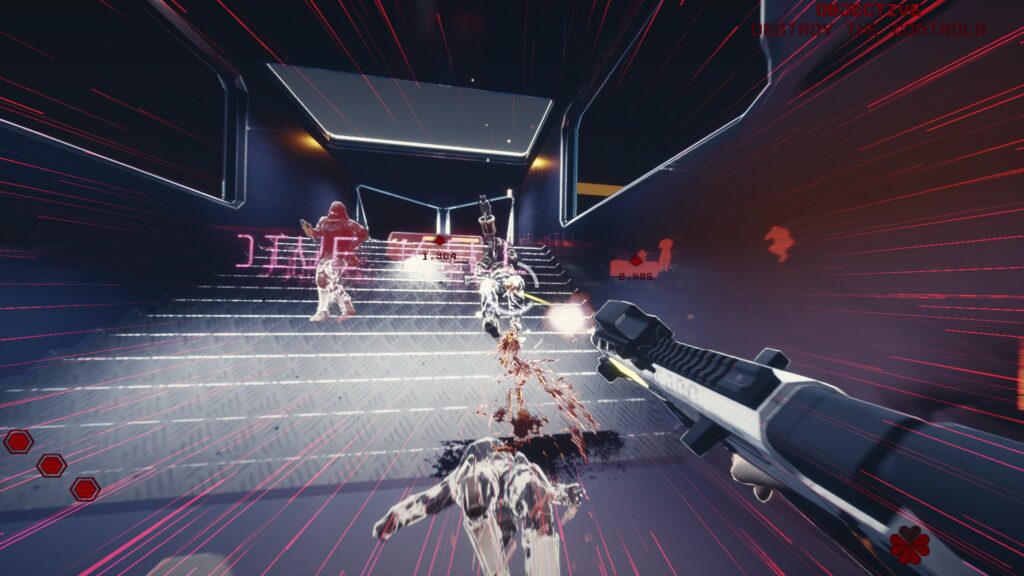 On top of a double jump and a kick, there are additional movements called stunts in this game: it is possible to wall-run, to perform a slide-crouch, and most importantly, a dive. All these stunts grant invincibility during their duration, so you should constantly make use of them to avoid enemy fire while you are moving. And you should always be moving, because the AI soldiers tend to be very dynamic themselves, chasing your last known position to flush you out or gunning you down from afar. The only safe way to get a kill is to approach them while under the protection of a stunt, and that’s why the dive is so important: jump then dive in the direction of your enemies to give you the opportunity both to get closer and to line up a few shots thanks to the slow-motion. This system is excellent because it rewards forward momentum: playing aggressively becomes pure fun, letting you feel like a fearsome predator. While most FPS games require their audience to shoot from behind corners or keep circling backward, a few manage to reward rushing into enemies; NecroVision lets players regain health through kill combos, and DOOM (2016) & DOOM Eternal let players perform glory kills on staggered enemies to gain health points. Therefore, Severed Steel managed to find a way to engage in forward momentum without a health incentive, by combining movement mechanics with slow-motion! As an aside, health in Severed Steel is limited to a few health points that regenerate automatically to some extent; the character is a glass canon. 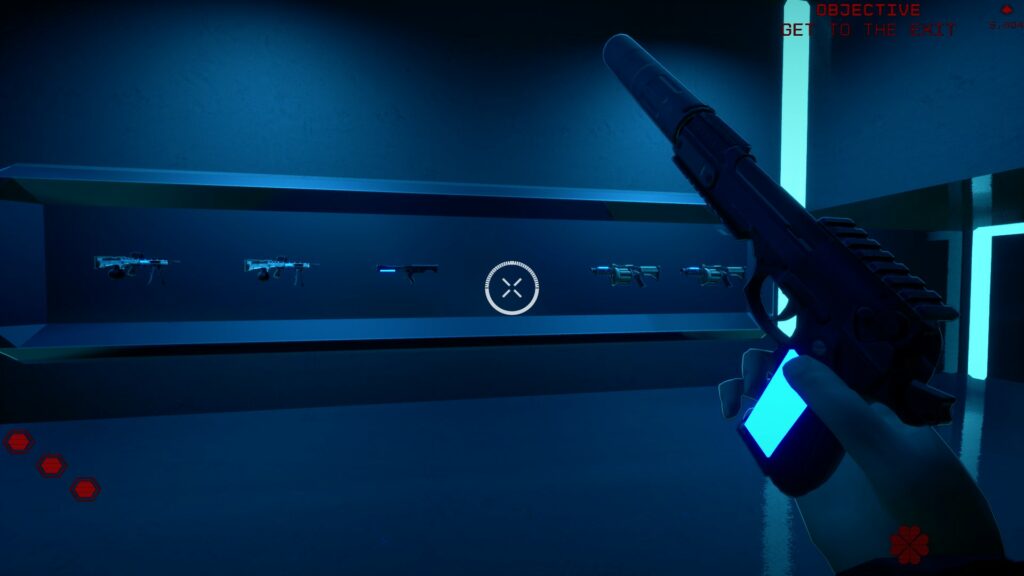 Other game mechanics fit nicely into this system. Our main character, Steel, has been amputated one arm, so she can only carry one weapon and she cannot reload it. Therefore, she has to constantly move toward enemy positions to pick up new weapons (done automatically if your magazine is empty), and something brilliant was added to that: your enemies don’t need to be dead for you to pick up their weapons. They carry side-arms that you can pull off of them! Now picture this not-so-rare moment: out of ammo, you dive above an enemy. The camera is getting flipped, but with the slow-mo you can still see what is going on. As your trajectory intercepts the upside-down enemy, you grab their gun, then you shoot them in the face and get rewarded with blood and a satisfying crunch sound. Orgasmic. The weapons themselves have incredible punch, Severed Steel‘s shotgun is godlike, even at long distances. 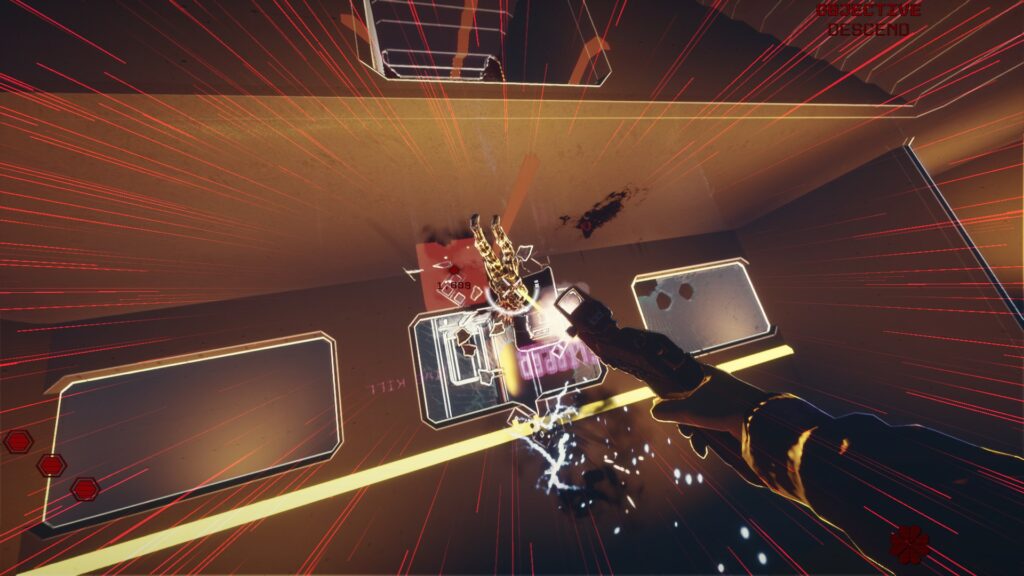 Already at that point, this is a game worth playing, but then it goes one step further. F.E.A.R. boasted excellent environment destruction effects for the time, with bullet impacts defacing walls and clouds of dust emanating from the plaster. Severed Steel’s weapons punch actual holes in the walls. A rarely-seen dream ever since the first Red Faction graced us with the technology but was too coy with it to let its players abuse it and make the levels unplayable, so there well lots of indestructible surfaces. Severed Steel doesn’t care: the game replaces your severed arm with a canon, and you can shoot below your feet and fall out of the map. Serves you right. Next time, use it better to shoot below enemy feet and see them fall to their death! Or create yourself a shortcut to the end of the level! A voxel technology powers walls and glass, letting you and your opponents go wild. At the end of the carnage, I was always taking a break to admire with awe the levels punctured with holes that had more in common with Swiss cheese than with human architecture. And that flamethrower level was pure bliss. Most of the game features minimalistic graphics in the vein of Tron’s neon or wireframe art style, which goes hand in hand with the electronic music. A few maps try to inject more textures, but they are usually very blocky and not as nice as the almost transparent levels. 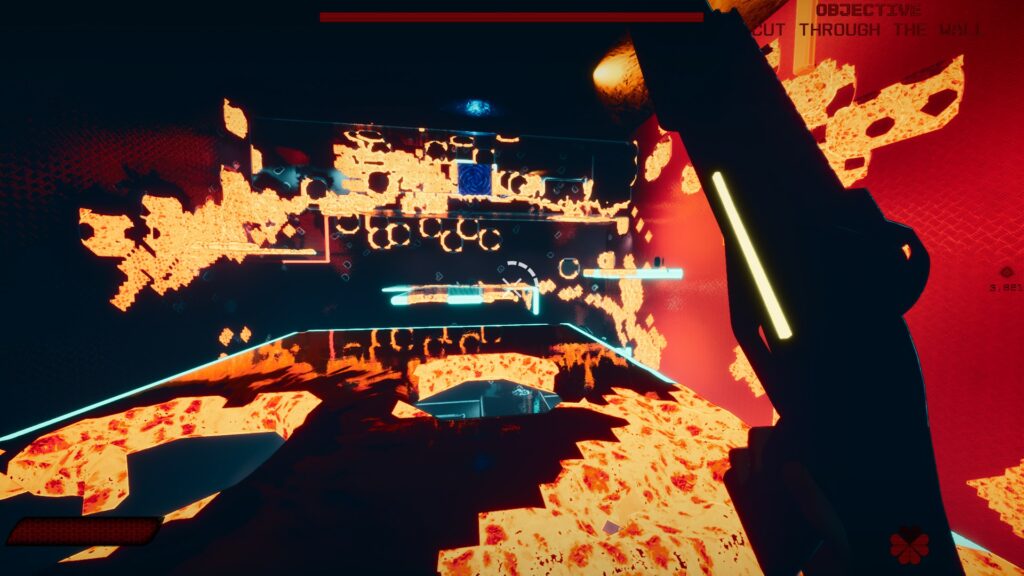 Not Everything Is Shiny

While the trade-off for invincible stunts is a trajectory that makes it harder to aim, the trade-off for complete level destruction is an impact on the framerate. Thankfully, both are mitigated by a very useful slow-motion that replaces twitch reflexes with a deadly ballet. Sadly, the game has other flaws, such as the script for enemy AI sometimes not triggering at all. I played some levels without any opposition whatsoever. The sound can stutter during the occasional short cutscenes. Oh yes, there seems to be a story in the game, but I have no idea what it was about. At least the story doesn’t get in the way of fun: the levels are entirely focused on combat, with no exploration or dialogues. 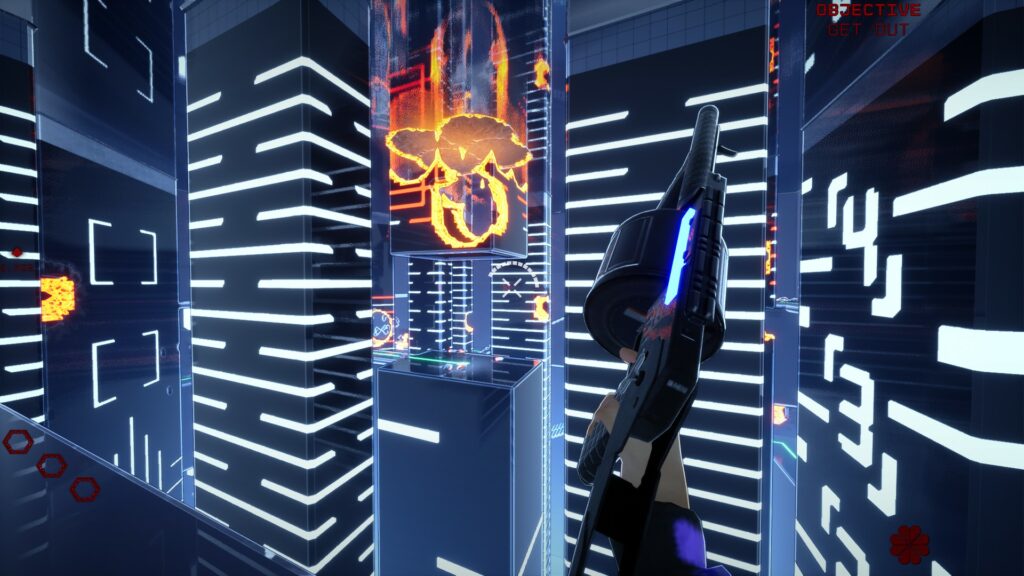 As a consequence, the game can be rather short, with people playing in lower difficulty reporting 2.5 to 3h to finish the campaign. In higher difficulty modes, aim more toward 6-10h. Weirdly, I think that the first level is the hardest. It’s a combination of getting used to the system and a very open layout that gives no respite to the player, so it’s a tough beginning but also a way to force us to adapt to the game mechanics before letting bad habits set in. Swim or sink, basically. However, once the basics are mastered, the sense of flow is perfect. Considering that the game is about gunfights rather than story, replayability is high in the next available game mode: Firefight. There is a score leaderboard for each level, as well as specific challenges (kill 2 enemies by knocking doors into them, kill 4 enemies while being flipped, etc) that allow you to unlock new starting weapons for the Firefight mode. And if that is still not enough, there is a level editor. Considering the possibility for gimmicks allowed by the combination of levels and game mechanics, I am certain that the community will soon have a lot of interesting maps to offer. 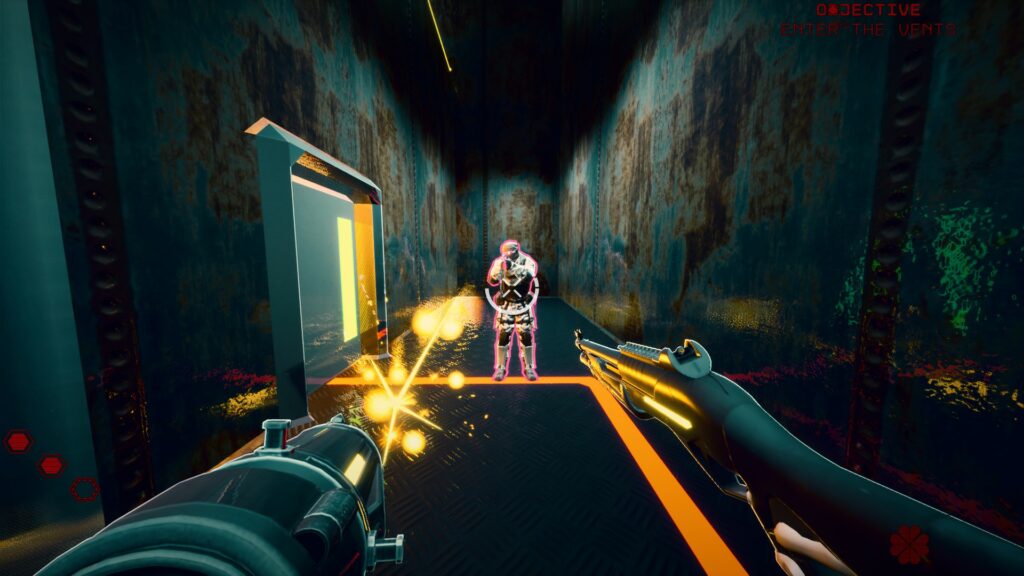 A Game of References

If you need big names to draw comparisons, here is what I get from Severed Steel: F.E.A.R.’s advanced modern combat and melee, with the feel of its enemy soldiers. Spiced up with some of Titanfall and Mirror Edge’s aerial feel with wall-runs and jumps. Maximum Action’s stunts and slow-mo (but done right). Tron and Superhot’s minimalistic color palette, with the latter’s minimalistic approach to story. Red Faction’s level destruction. Then Hotline Miami’s nervous die & retry approach to the levels… and its iconic mechanic of pushing doors onto unsuspecting victims. 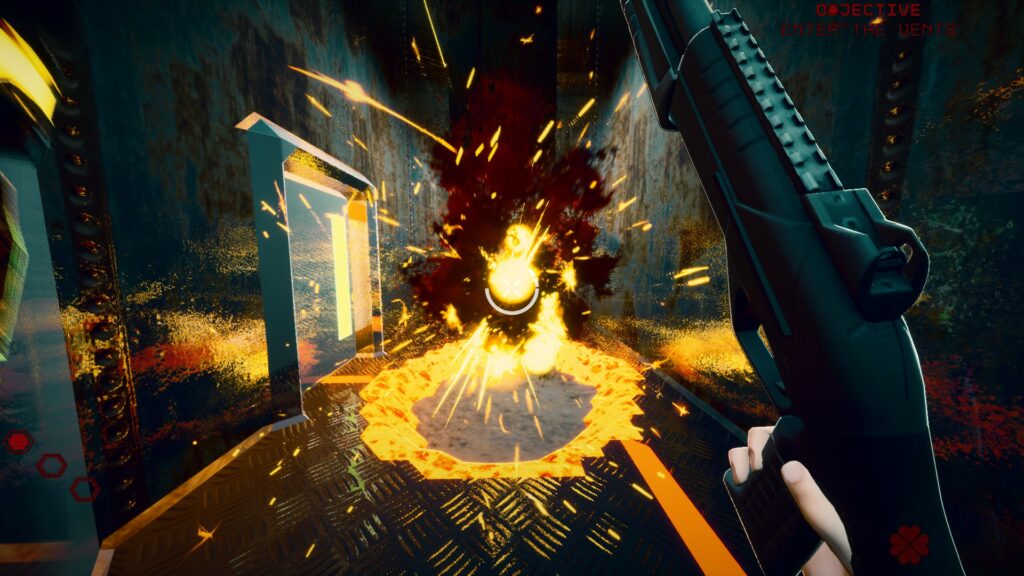 Despite its few flaws, Severed Steel is an incredible game, the quintessence of modern first-person shooters, delivering what the evolutions of the genre always promised to offer but never managed to put together in a tight and coherent package. After some getting used to the game mechanics, this is some of the best fun I have had in a while: a focus on stylish shooting and destruction without any dead weight.