Use bullet-time to kill baddies, with style.

New Blood Interactive seems intent on grabbing promising neo-retro shooters for itself, as it is publishing Dusk, Amid Evil and also MAXIMUM Action. All these games evoke the sweet flavor of nostalgia with their low-poly models and big chunky pixels, and yet each is a completely different endeavor. MAXIMUM Action leans heavily towards Hong Kong movies from the 90s and their birthchild, The Matrix. Case in point, the game’s most prominent feature is bullet time, letting you dive into the air while shooting akimbo guns like Neo or Tequila.
As a testament to the nineties, the menu is inspired by the VCR era, and the levels are “scenes” for you to shoot in both senses of the word: once you are done clearing the level, you can replay the action and watch your clunky avatar as you customized it. The camerawork, however, is very janky… just like the rest of the game.

I already struggled in the first scene, as picking up weapons and wielding them separately or together takes some getting used to. Moving is also very clunky, as aerial control is lacking and I sometimes felt like the body of my character was dragging me or getting stuck somewhere, stopping me right in my tracks. Nonetheless, I learned to move better, I got a better handle on the controls and I started to get a good flow. Jump, slow-mo, kick a bad guy into the window, jump, dive, shotgun someone’s face. It is fun!… then I prepared myself for the next encounter and realized that one of my weapons didn’t want to reload… sometimes both. Or even worse, enemy weapons disappeared and I was left with only my punches and my tears… You can see that I was suffering from one of these issues at the end of both videos included in this article. MAXIMUM Action is in early access, and it is clearly still very rough around the edges. 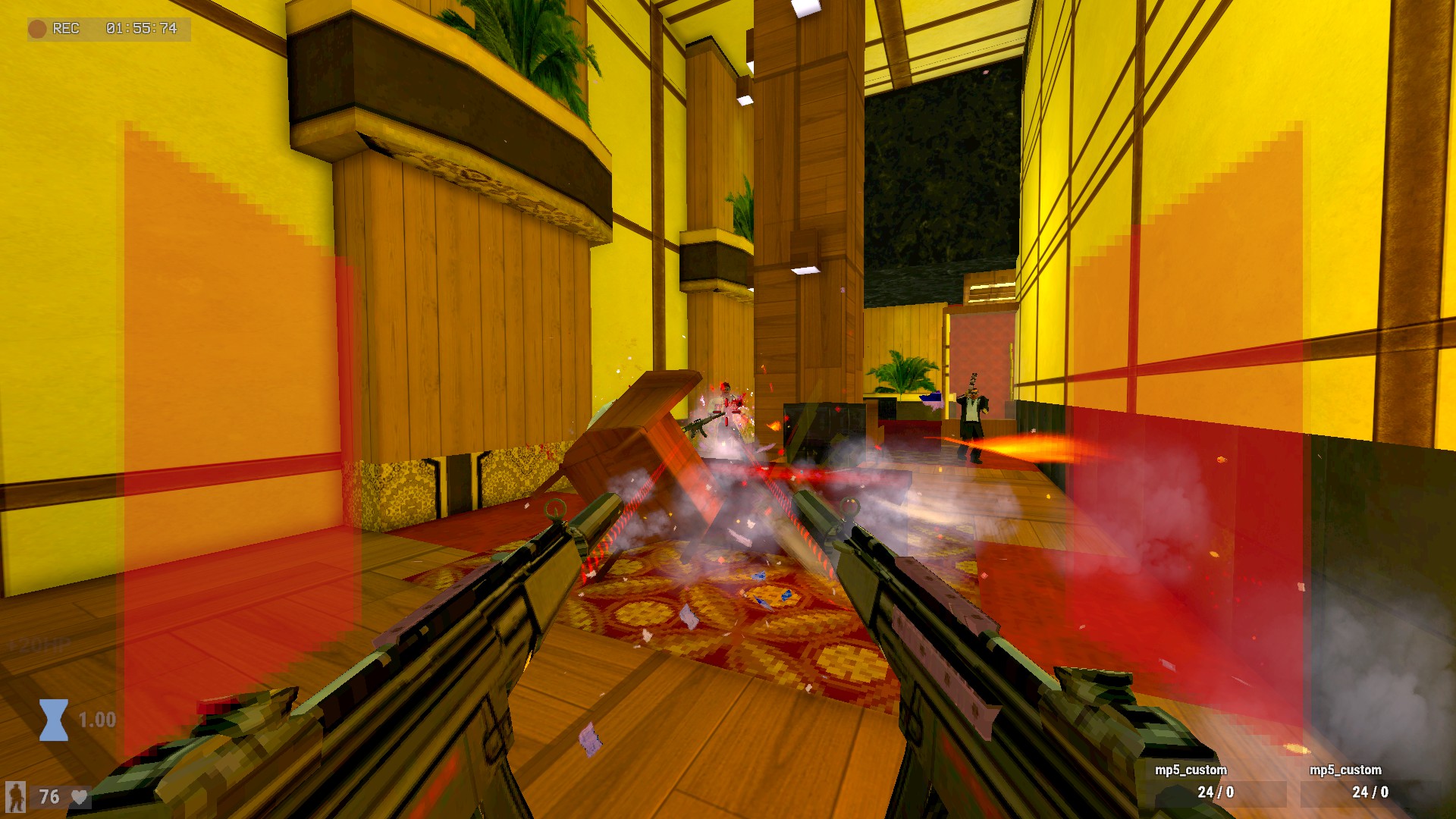 The enemy AI is completely uninteresting, and most levels have a very simple blocky layout, so the game doesn’t really stand on its legs like a traditional FPS. Without the slow-motion, I might have confused it for a game made with FPS creator or the likes! It only becomes good once you play for scores… and style, most importantly. Don’t try to simply clear the levels, do it in a way that sounds cool to you. The more you replay a level (they are fairly short), the better you see how you can have fun with it! After all, there is no story, there aren’t many levels, and you can tackle them in any order that you wish. What is more interesting here is that each level aims for a different atmosphere (a different movie inspiration, if you will), from the streets of Hong Kong to a rooftop chase with helicopters. Along with the different architectures, there are also many many weapons to wield, and the Western area has fitting colts and rifles. I only regretted the sequences with long-distance gunfights, as they are not very satisfying, unlike the close to mid-distance fights: the weapons have a sweet recoil and sound, they also tear apart the enemies into blood spatters and limbs that fly across the screen (you can adjust the level of blood in the menu, but don’t expect something as crazy as Brutal Doom). 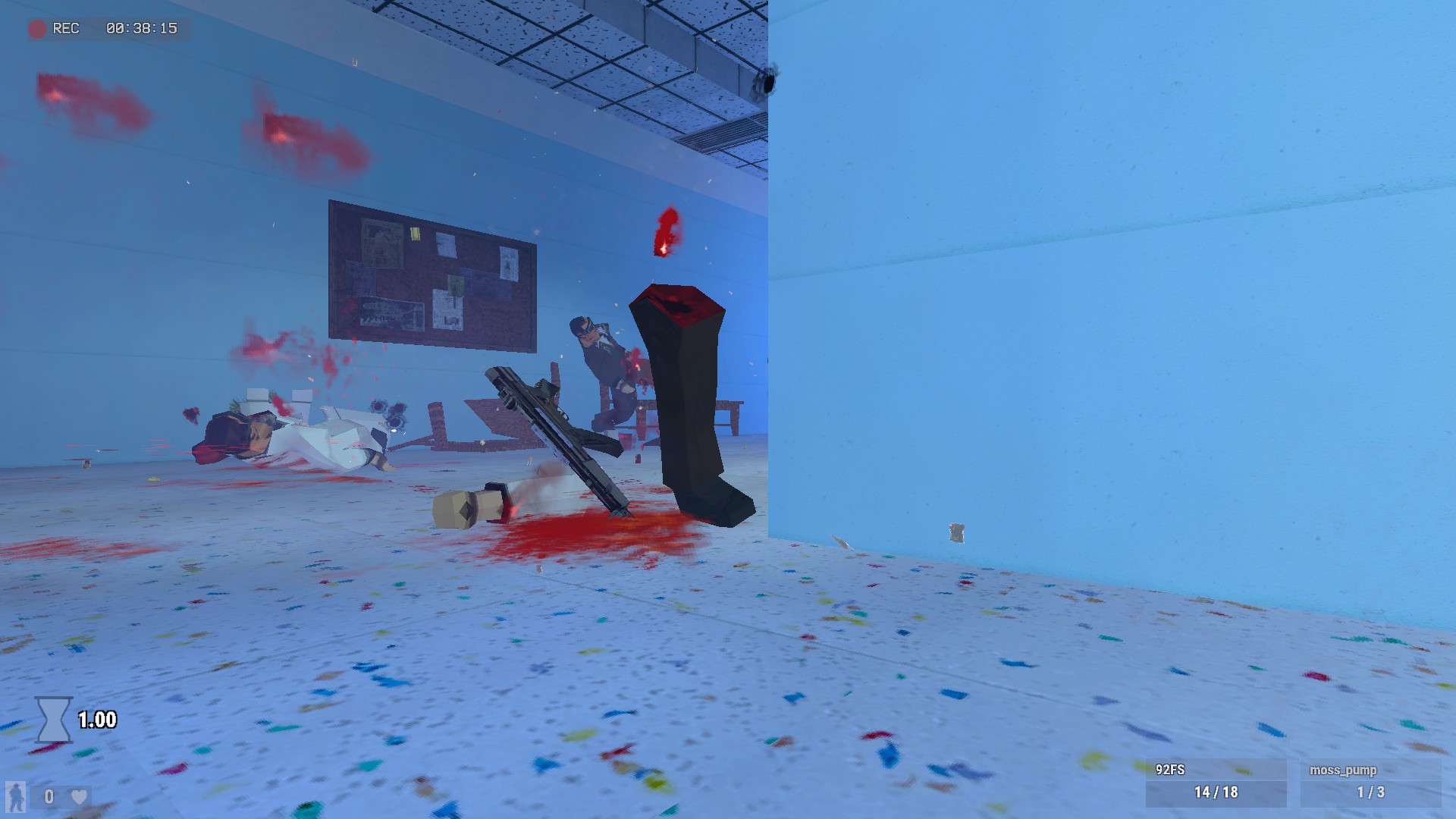 Apart from the eight base levels that can be completed fairly quickly, there are endless levels with enemy waves (one of them is made after Dusk) and a level creator, so you can probably expect some really cool stuff further down the line. 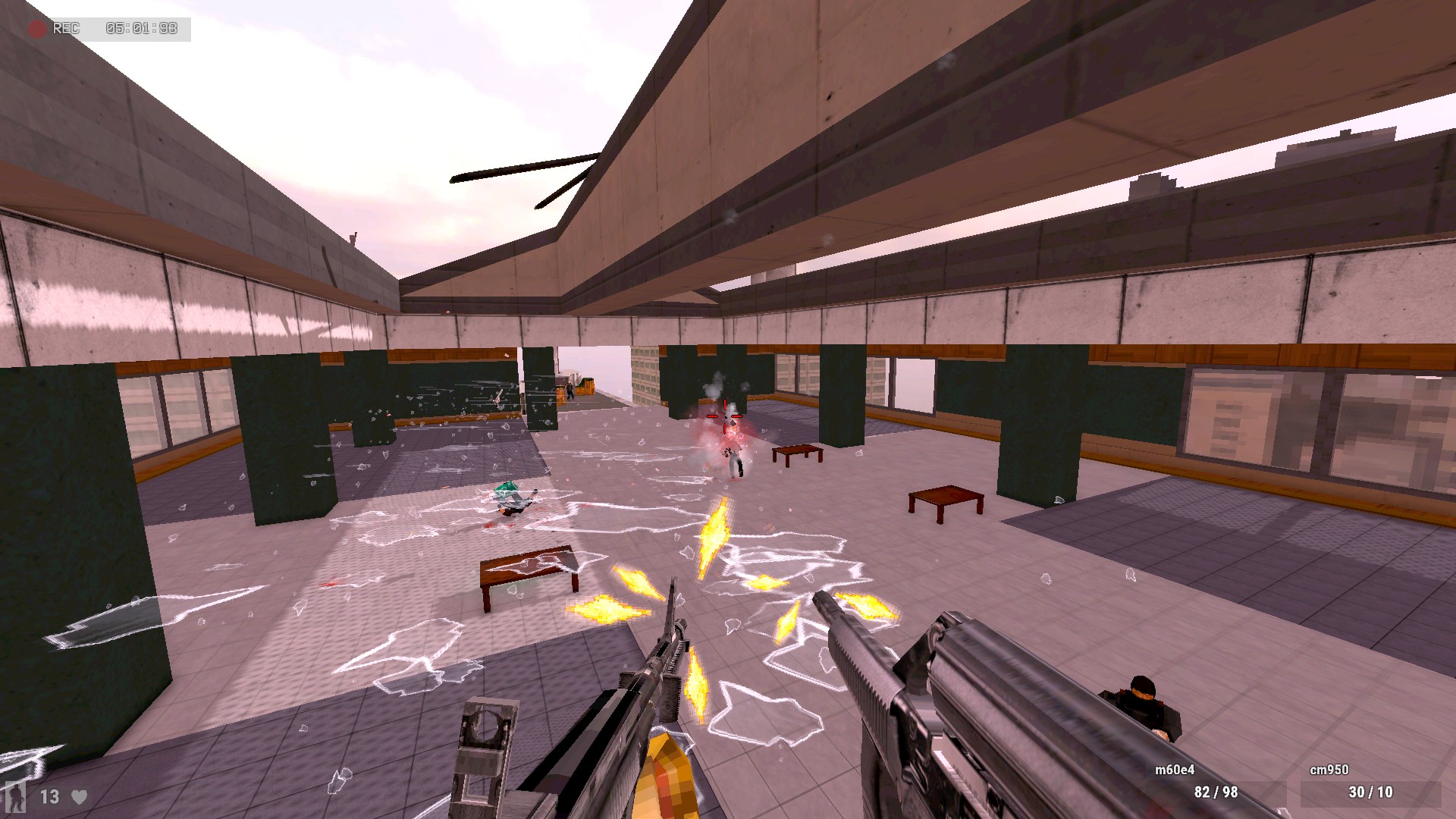 I had a hard time getting into MAXIMUM Action. Handling the character feels too clunky for what the game sets out to be, there are many bugs that are certain to hinder your flow, and it sometimes looks too much like an amateurish FPS creator game. However, when you swiftly move from enemy to enemy doing cool moves and enjoying the effect of the weapons, then it can feel worth it. For now, I would suggest that you hold off on purchasing the title and check it again later during its early access cycle.