A narrative-driven cyberpunk RPG with virtual worlds, choices to make, and cases to solve.

Gamedec is a CRPG that takes us into a cyberpunk world during the 22nd century where virtual life on the net has become even more widespread and important than now, where entire communities conduct their business and where some spend a better part of their lives. This RPG focuses heavily on narrative, dialogue, and making choices in order to make progress in the story, as well as a lot of reading. It’s very reminiscent of games such as Shadowrun and Disco Elysium. 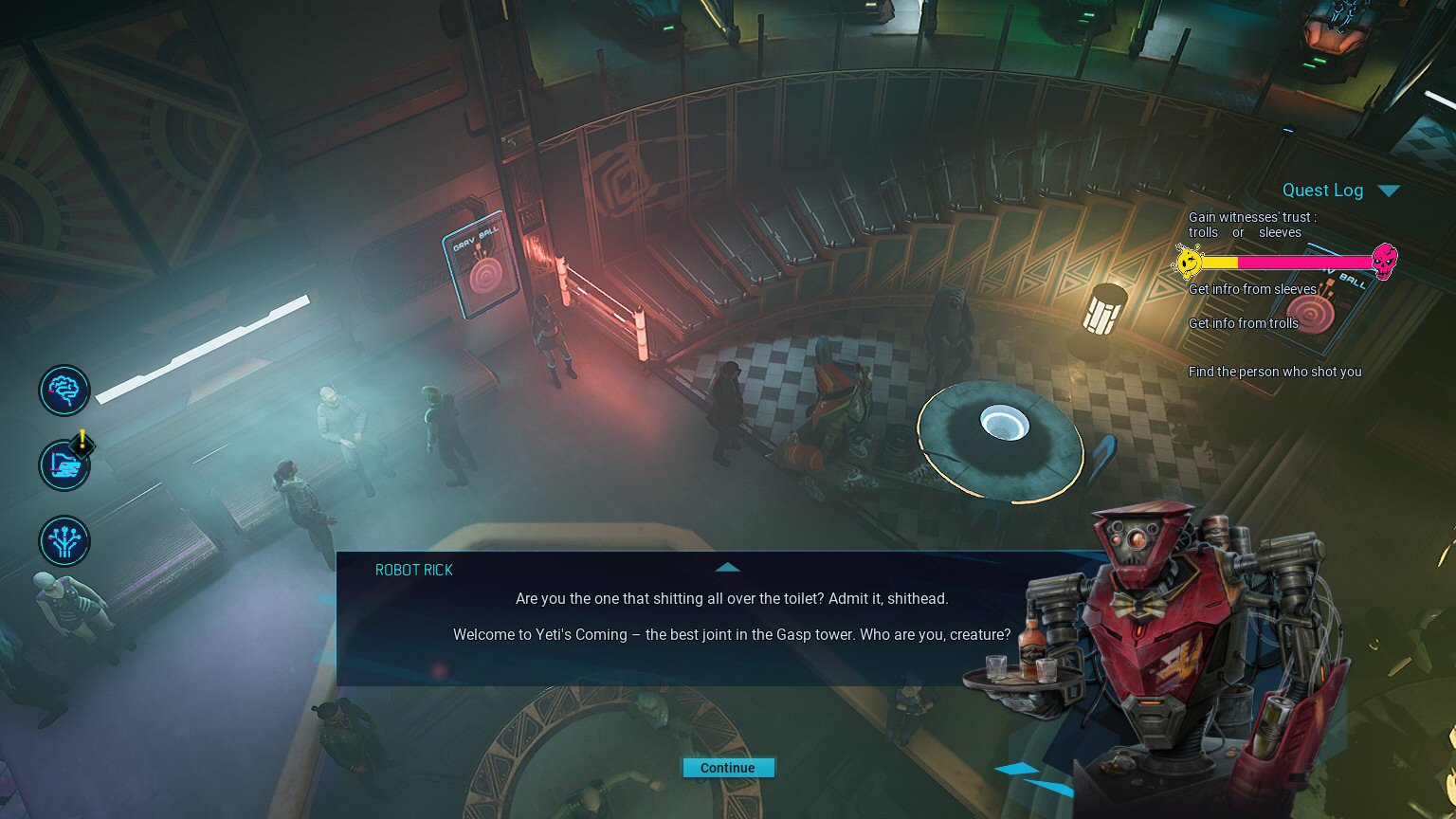 As mentioned above, the game world is quite detailed and has a lot of lore, which is mainly centred around the concept of virtual worlds and how they impact people’s lives. The game uses the terms ‘realium’ and ‘virtualium’ a lot to distinguish between real world and virtual world. Our character is a gamedec, which is short for game detective. A gamedec is a sort of a freelancer who takes contracts from various clients to do investigations within game worlds. These investigations could include getting sensitive information the client is after or solving a crime even.

Without giving out any spoilers, the main story really has our character going about his or her usual contracts, and eventually things start leading us towards a certain and unusual set of events. Maybe this is our biggest case yet. 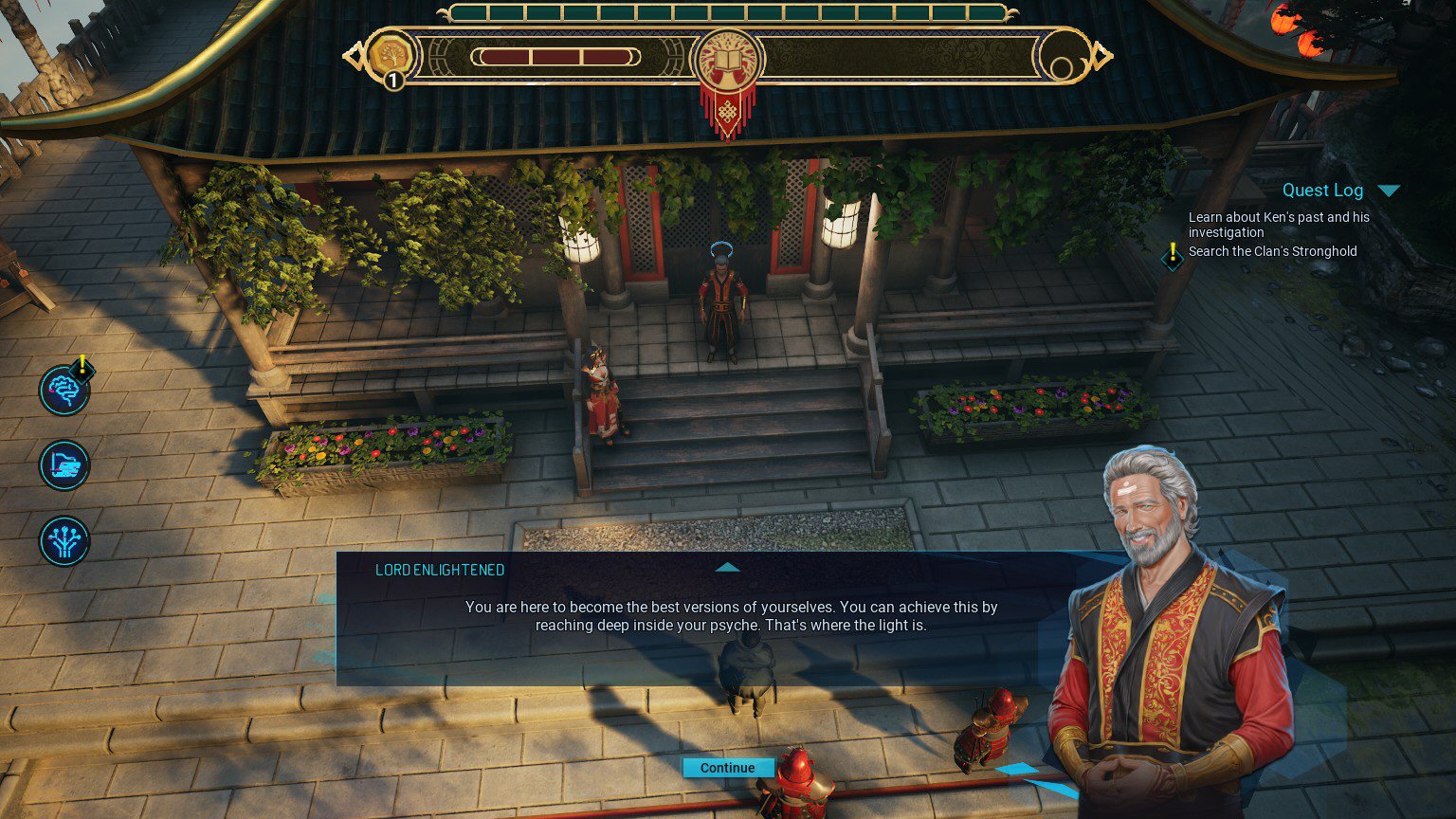 The gameplay is generally slow-paced. We have to spend a lot of time investigating, talking to NPCs, interacting with the environment, and trying to figure out what happened and who is involved.

When talking to other characters, we often have many dialogue choices. Some are merely for information-gathering, while others are choices that can steer the conversation one way or another. With some characters we even need to win trust in order to unlock new dialogue or some juicy clues. When we talk with these, we often see a bar with padlocks on it. If the character warms up to us and develops trust, the bar moves to the right, while if they start to feel hostile towards us and get filled with negative emotions, the bar moves to the left. With many such instances, the answers we seek can be gotten in both ways. What’s important is to commit to a certain way rather than to dilly dally and teeter between being kind and being rude. It’s a rather interesting dialogue system that makes us think about what we should say. 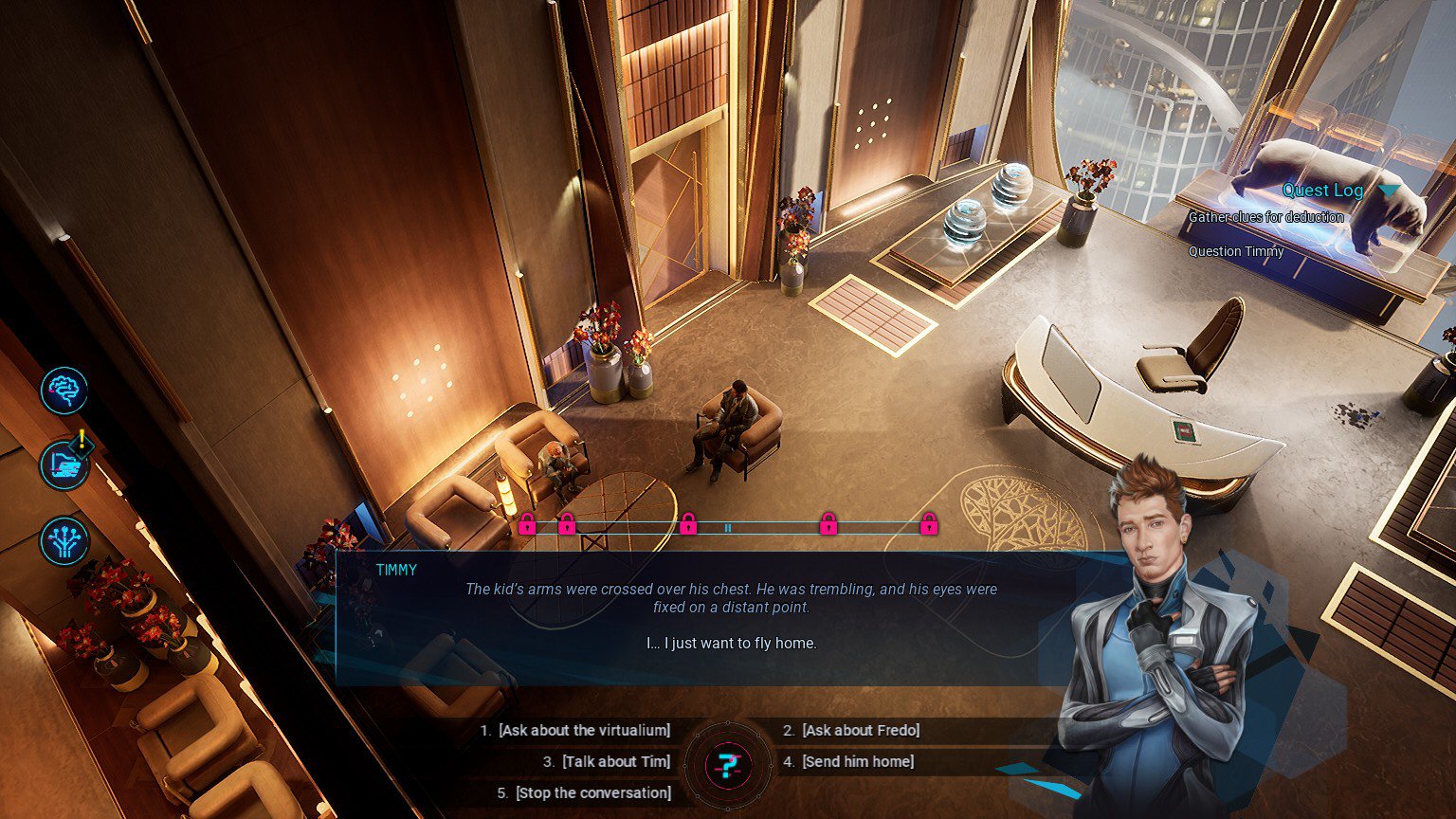 Getting information is very important in Gamedec, because it helps us in making our deductions during investigations. These deductions can then lead us towards specific story choices and outcomes. For example, if we accuse the wrong person of a crime, it could sour our trust with them, and they could be relevant to other story events later. There’s a lot of conflicting information during each investigation. Some NPCs will lie to us and try to give us incorrect information. At times information, even accurate one, can give us the wrong idea about something, and only if we uncover more, do things make more sense. Doing our deductions is necessary in order to move the story forward, so we can’t stay hesitant and neutral. Even if we’ve not gotten enough information to make an informed decision, we have to make a conclusion anyway and hope that it’s the right one. 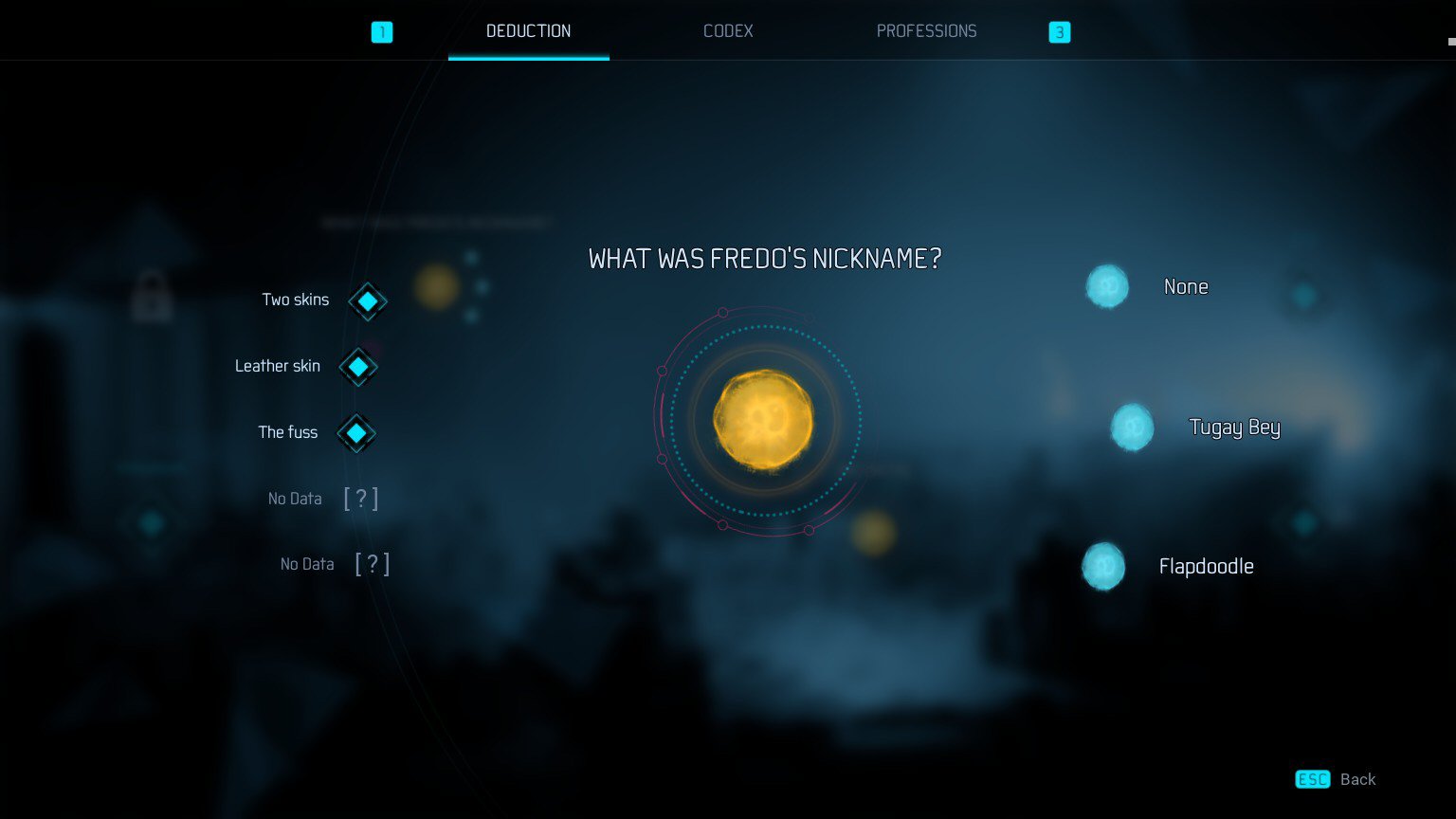 Of course we have some abilities and tricks up our sleeve. Or rather, we learn these as we make progress. There are 4 main types of skill points, indicated with icons, and these are associated with different personality traits we show when we interact with others or solve the cases. To simplify it, we have proactivity and determination (shown as a red fire), innovation and creativity (shown as a yellow lightbulb), logic and discipline (shown as a blue jigsaw piece), and kindness and compassion (shown as a green heart). These are needed to unlock the abilities on the ability tree.

The strange thing, however, is that rather than one type of skill point being relevant to specific parts of the ability tree, it’s all a stirring pot. For every ability, you need to have sufficient number of 3 or 4 different skill points. So, in essence the game encourages us to diversity in our approach and to do a bit of everything rather than to specialise in a certain area. I personally found this quite unusual, especially that most times it’s not clear which of our actions will grant us skill points and what decision will grant us what skill point. So I ended up getting the skill points very randomly rather than what I wanted. This meant that the upgrades I had to get weren’t always what I wanted, but rather what was available with my current skill point types. A lot of the time I had too much of one skill point type and not enough or none at all of another, which made things annoying, because this made it impossible to acquire enough abilities. 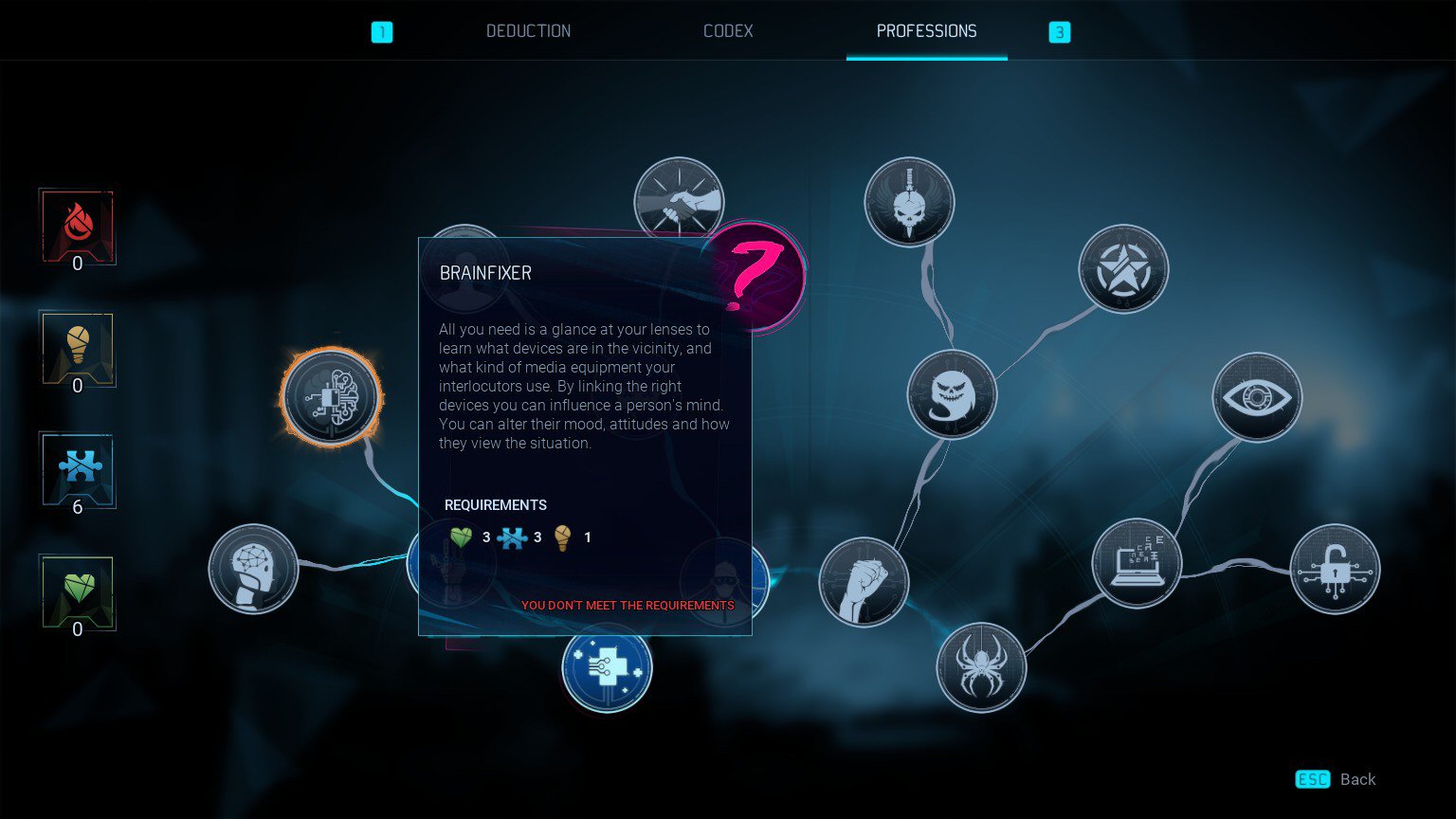 Why are abilities important? Well, abilities unlock new ways of tackling challenges and completing tasks. We might need to use one of the special abilities to convince a difficult NPC, or we might need specific computer skills to hack into something, or we might need sufficient medical knowledge in certain situations. So in that regard, the game did pretty well, because there are plenty of times when a certain ability comes handy. And whether you have a certain ability or not could affect in what way you solve a case and as a result what the outcome might be.

Because of the nature of upgrading, as I mentioned earlier, you often end up picking abilities from different trees, and this can be a bit strange for the role-playing narratively. One moment I could be coming across as a serious medical professional, and in the next line of dialogue I could be acting like a bubbly internet celebrity, and it’s well weird that other characters can even take us seriously when this happens.

So, generally I liked the inclusion of special abilities and them being useful to unlock new ways of interacting with people and environment, and the idea of 4 different skill point types is also great. But I think the game should’ve had certain abilities unlock only by 1 or 2 specific skill point type, rather than by a bit of each of them. This would encourage players to specialise rather than being a jack of all trades. The jack of all trades approach makes narrative role-playing strange and also makes upgrading along the ability trees rather unsatisfying because every ability simply starts to feel like just another means to unlock more options for interaction. For example, I can’t even remember what the difference is between a Brainfixer, Vox Populi, and Molecular Scripter. I just remember that all of these open up new dialogue options of swaying NPCs to do what we want, so you just treat all these abilities as the same thing.

During the progress of our investigations, sometimes we play mini-games and solve puzzles. These are virtual game worlds after all, and sometimes we need to win points or money to do certain things in those games. I had a bit of mixed feelings on those, as at times I felt like it was sidelining me away from the main investigation and trivialising the whole experience. We all came to Gamedec to play a cyberpunk RPG, but in some tasks we’re required to farm pumpkins and strawberries or to collect timber and iron and make tokens. 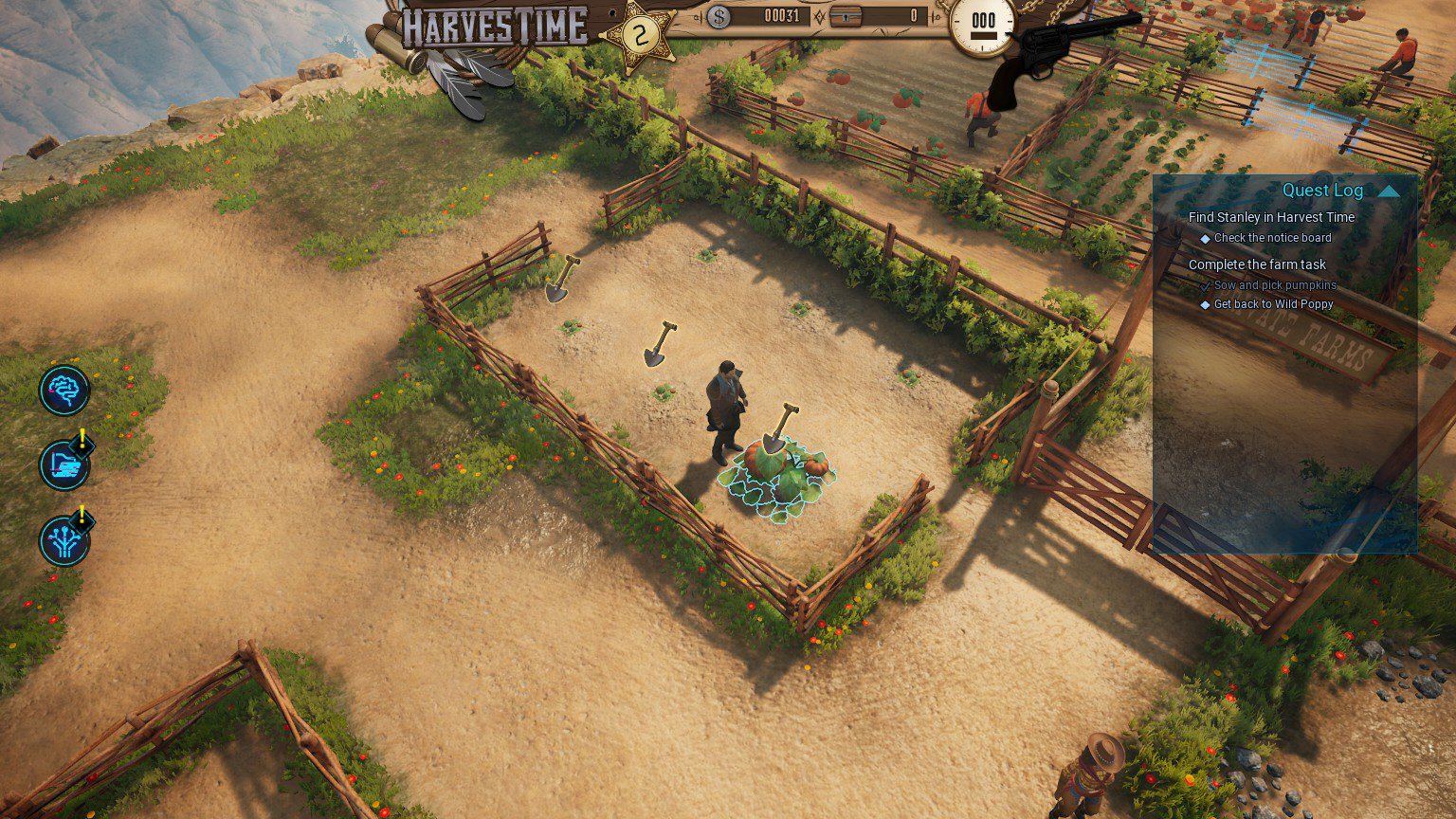 The game has excellent and stunning visuals, helping to create the atmosphere of the place you’re in, whether in realium or in virtualium. The realium places are full-on cyberpunk as we’ve come to know it. The virtualium locations on the other hand are varied, ranging from a wild west setting to Eastern Buddhist temples and the like.

The character portraits are all nicely-drawn and stylish, and the interface is generally crisp too. There is a fair bit of reading though. In particular there are many codexes in the menus with a lot of background info. And at times during some conversations with NPCs, there can be a lot of flavour talk. So, expect to do a lot of reading and needing to get familiar with the game’s lore at least to some degree, even if, like me, you choose not to read most of the codex entries aside from the most crucial ones. 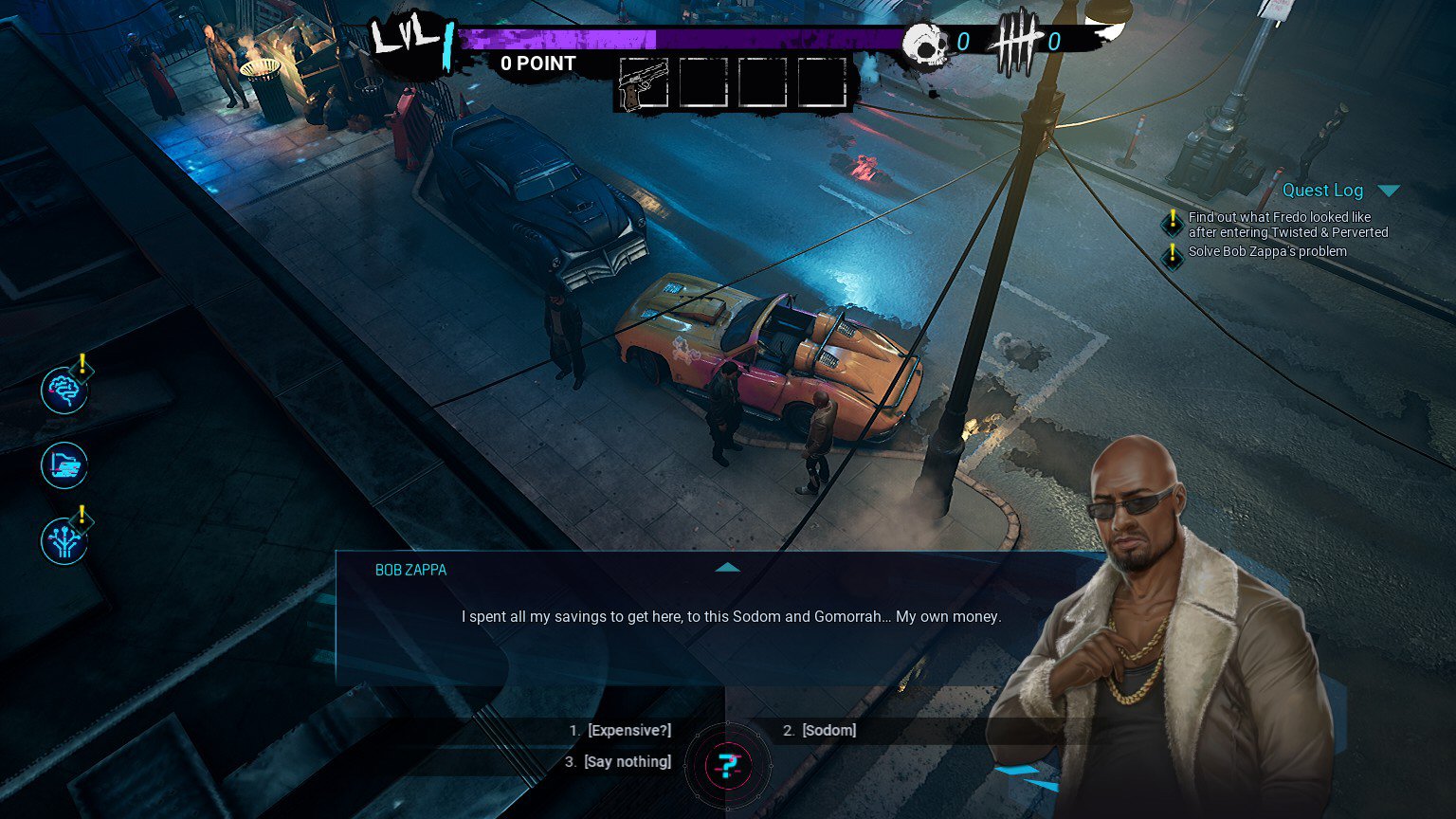 Sound-wise the presentation is more minimal. The music is mainly ambient and in the background and there’s no voice acting.

Not come across many glitches in the release version of the game, aside from an occasional difficulty for our character to walk around the NPCs in order to talk to someone, as well as a few instances of text here and there still not translated from Polish, and there was also one crash that required me to end task the game from the Task Manager.

Despite some strange design decisions regarding game mechanics and pacing, Gamedec is generally a good quality RPG with a detailed world and a healthy variety of ways to accomplish the tasks in order to make progress. But, I would recommend you to wait for a discount. I was actually strongly considering giving it a ‘Save’ rating, but I think its full price is too high for the enjoyment it provides, as parts of the game can feel really mediocre and a slog to go through. If you are a massive fan of games like Disco Elysium and Shadowrun and cannot wait to sink your teeth into another game like that, then perhaps Gamedec would be worth the full price for you, but otherwise, I’d suggest to wait for a discount.