We are going all the way back to October 1944 as World War 2 is nearing the end as the German Army is about to withdraw. However, they have something else up their sleeve that their enemies, and maybe even their allies, won’t see coming. In this alternate history retelling, Germany set up a secret division called Okkulte-55 that put its focus on the occult. I suppose anything that has the possibility of giving them an edge in the war is worth looking into. However, unlike in our reality, it turns out helpful in this universe as the general in charge of Okkulte-55, Friedrich von Darka, found out about an ancient curse. A curse that will surely change the tide in their favor. 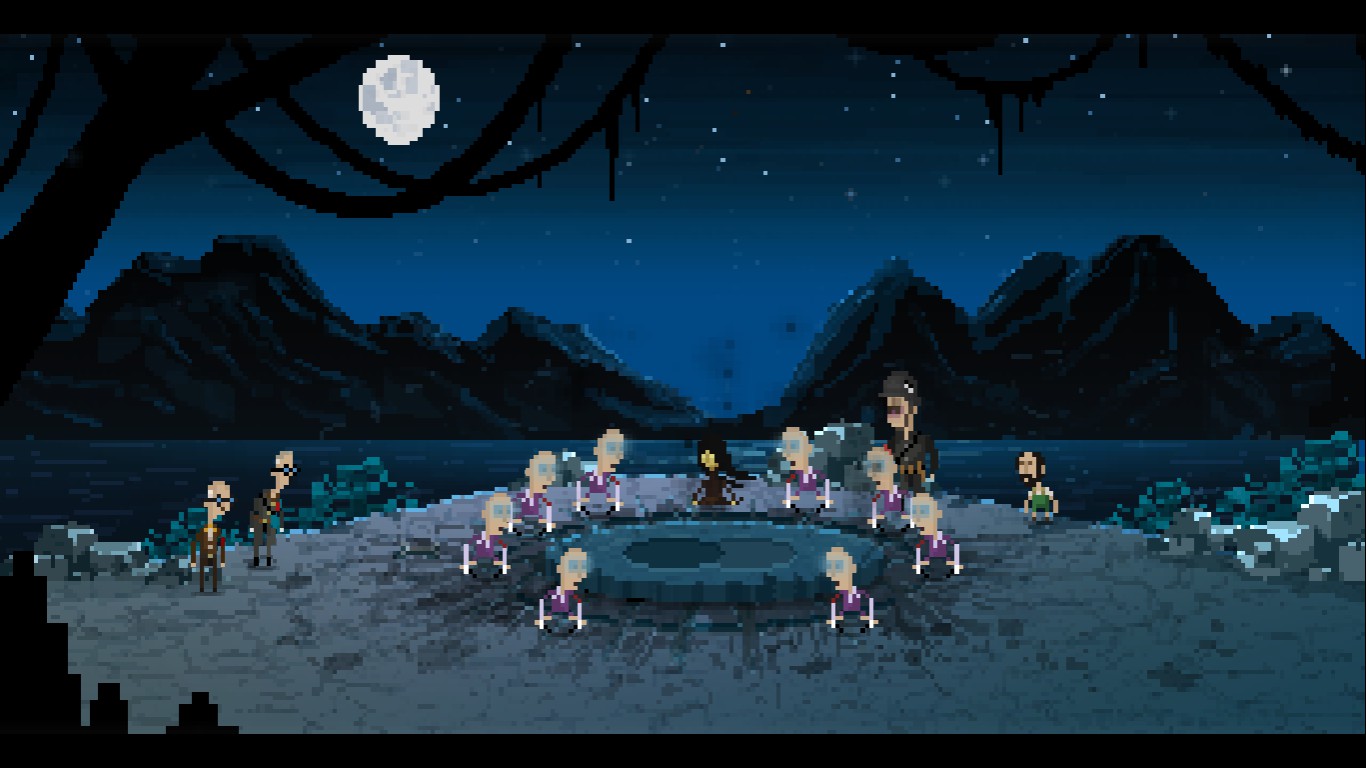 On one dreadfully rainy day, we meet our two protagonists: Alexei Krakovitz, a quadriplegic professor of occult science, and Akiro Kagasawa who is his faithful assistant. They’re visited by the Prime Minister with some frightening news. In a small Norwegian town named Sundäe, Okkulte-55’s general and head scientist kidnapped a witch to perform a ritual that released the curse. It hasn’t taken effect yet, but once the dark moon it created has fully eclipsed out own it will. So in an attempt to stop the German Army’s plan, Krakovitz and Akiro is sent to infiltrate Okkulte-55 while their celebrating their future victory at Eklipse Fest to stop the curse before its too late. 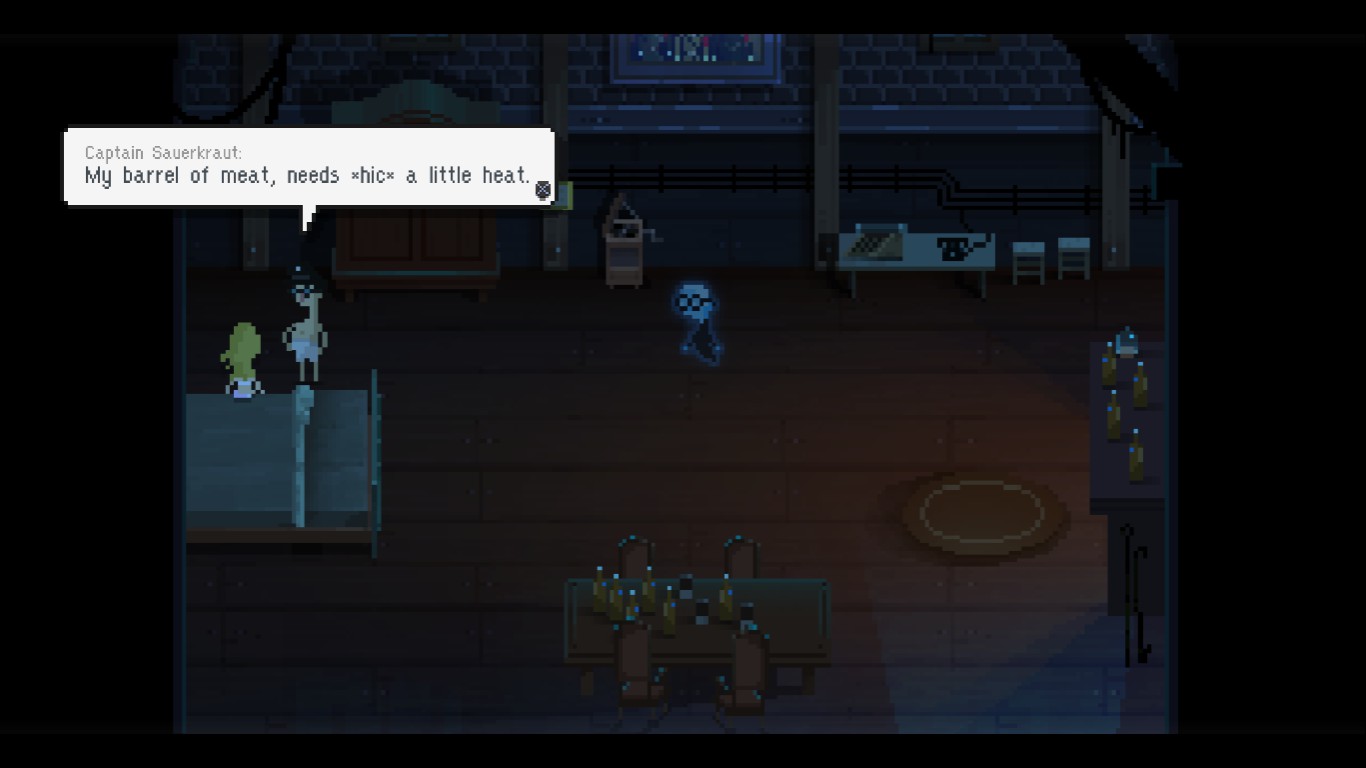 As you’re going through Sundäe to gain access to Eklipse Fest, as of course it’s not going to be so easy, you’ll be switching between controlling Krakovitz and Akiro. They compliment each other pretty well, both in their personalities and the way they’re played. First is Krakovitz who can’t really do much due to his disability, but is still helpful in his own way. Unlike others, he can put himself into a trance to separate his spirit from his body, giving him the advantages of being a ghost without actually dying. He can talk to actual ghosts (which he can sense) to get some much needed information, he can ping interactive points (though it only pings those in his range and it can be difficult to tell if it’s two different points or just one if they’re close together), he can go through locked doors to see what’s inside, and he even later gains an ability.

With Akiro, you’ll be mainly playing as him since he’s the one in this duo to be able to open doors, pick up items, and interact with the environment. He also has a gun. There are a couple of shooting sections sprinkled in where Akiro will have to defend himself. These happen right there in whatever location you’re in and you’ll have to line up Akiro to the enemy and shoot while also dodging out of the way of your enemy so they can’t hit you. Akiro’s gun has a tendency to jam, so you can’t exactly fire nonstop and you’ll have to make sure you can dodge out of the way if your enemy tries to shoot you. These sections start out easy, but ramps up as it throws enemies with higher health, more enemies (which will be sent in through phases or periodically walk in), and require you to protect Krakovitz from dying. Luckily, as the difficulty rises, various other guns are scattered around that will deal more damage and won’t jam, but will have limited ammo. 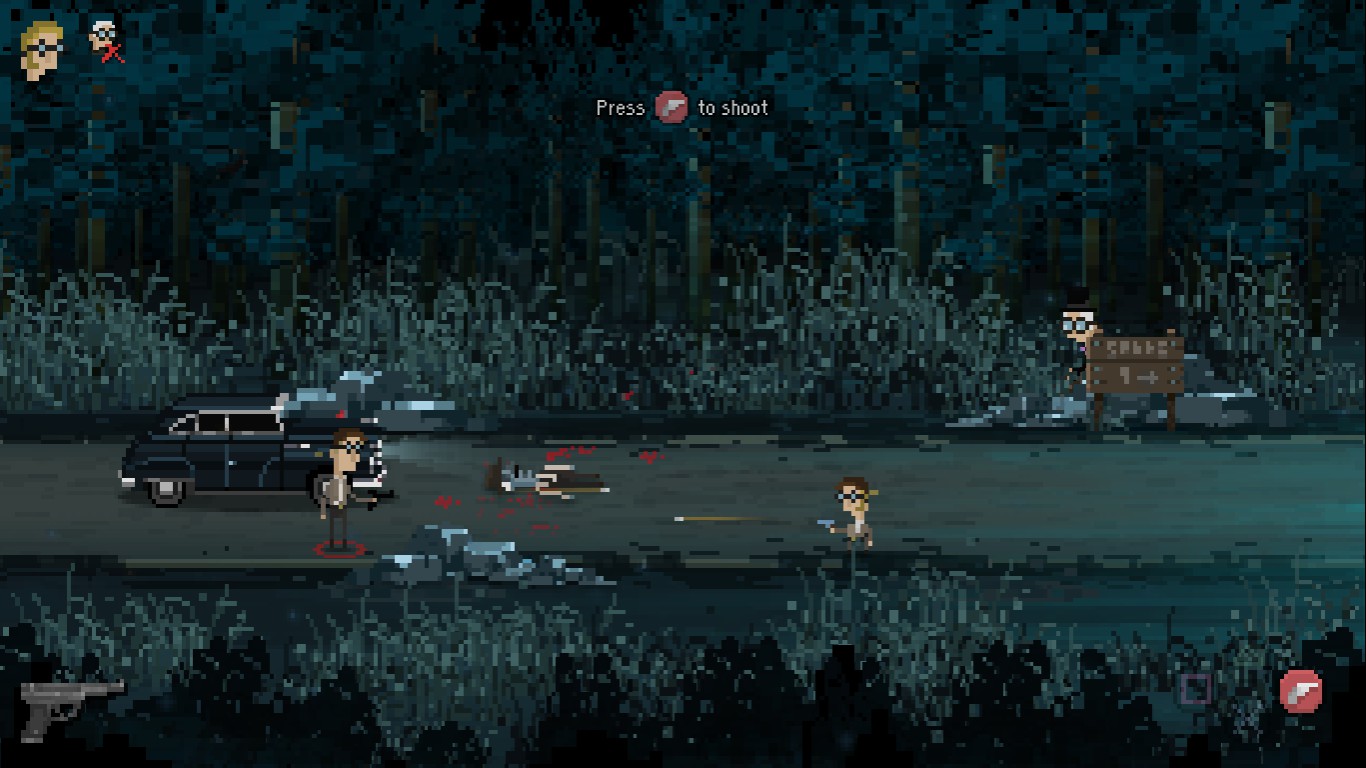 Honestly, I enjoyed the shooting sections. Sure, they do get hard and it can be annoying when you’re constantly failing (especially when you know you almost had it), but it was certainly rewarding taking what you learned from previous failures and finally succeeding. If you just don’t want to deal with the shooting sections, or just want to continue the story rather than being stuck on a shooting section, you will get an option to change your setting (or “sell your soul to the devil”) to basically skip them.

Puzzle-wise, I’d say it leans towards the easy side enough that you’ll be able to tell what the game wants you to do while occasionally needing to think about it. I did get stuck a couple times, but it was either due to me wanting to do something too early; having the right idea, but not placing myself to interact with the item I needed to or not having the timing right; and the needed item having multiple ways to get it, but the game wanting you to get a specific one. 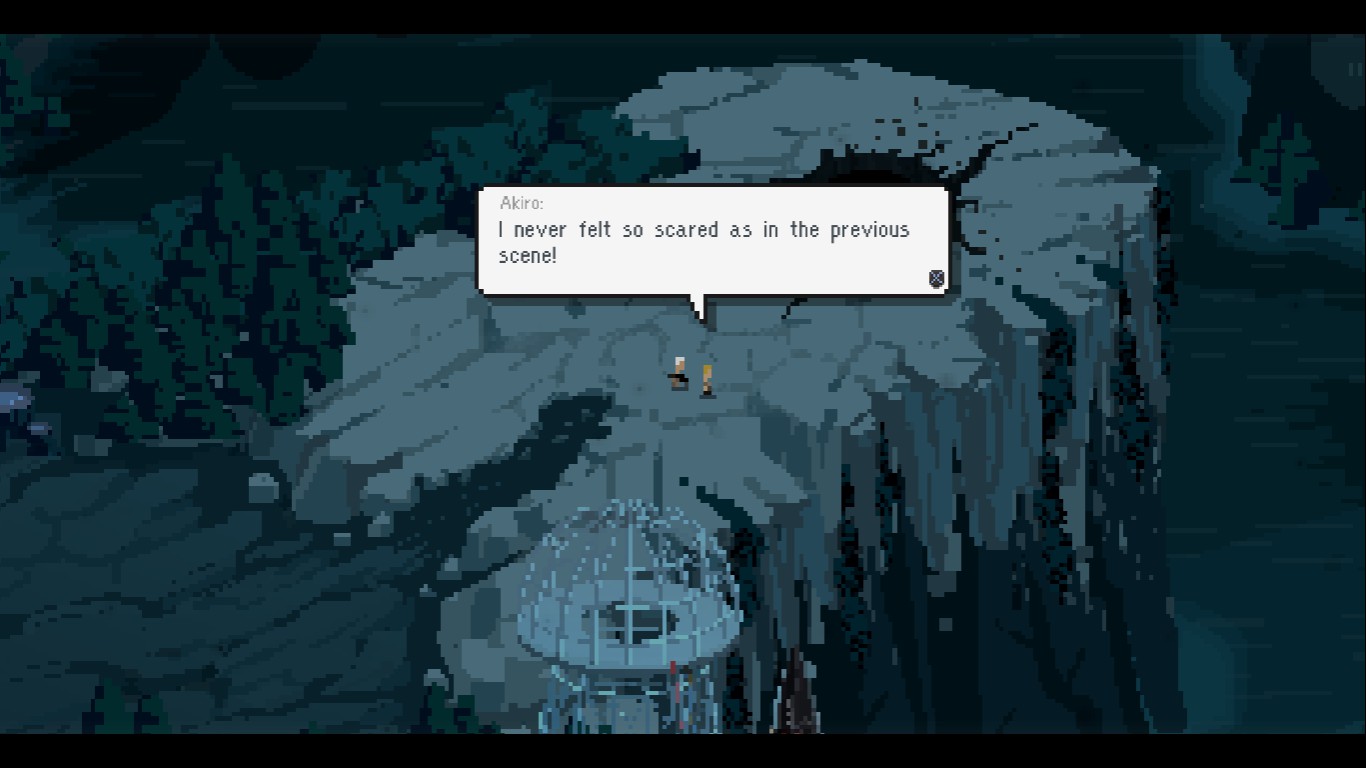 The one thing that drained me was the humor. There are great funny moments, but there are so many poop, fart, genital, and fourth wall jokes that it just got old and stopped landing for me. And I’m someone that still enjoys fourth wall breaks in games, but they just keep happening as jokes here to the point where the developers even show up and weirdly a Star Wars reference. With the toilet humor, it admittedly got me as I didn’t expect it, but it was used a lot (and I would rather not hear a minute of someone pooping).

I only ran into one bug where the character I wasn’t controlling wouldn’t follow, making me switch between both to travel so they’d still be in the same area (and hopefully fix itself as the game does autosave). It did fix itself after a minute or two, but I’m not too sure what could have possibly triggered it. 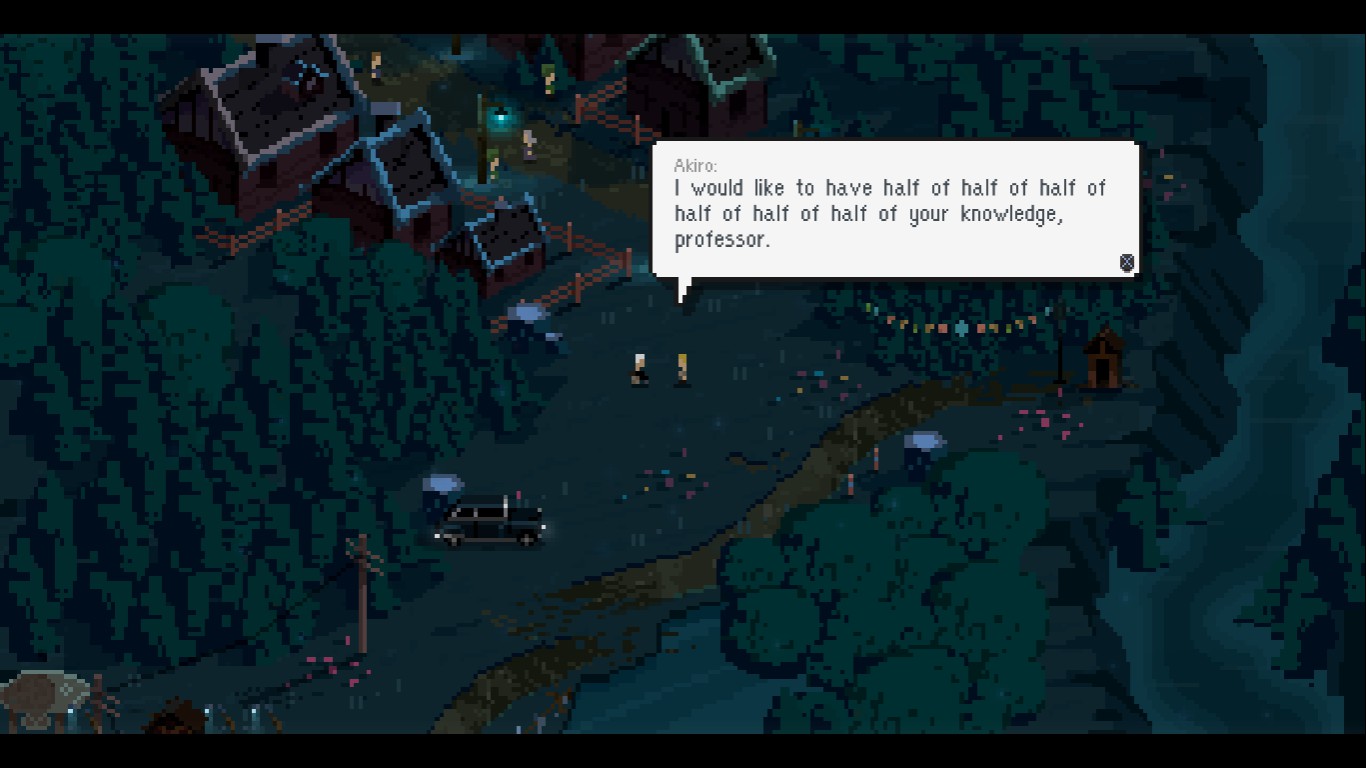 Nine Witches: Family Disruption is a good point and click adventure game. Everything from the opening, which is available in a demo, hooks you and it puts up a fight to not be shaken loose. I certainly didn’t want to tear myself away. The story is interesting, the mechanic of switching between a quadriplegic man that can leave his body as a ghost and his assistant worked well, and the great pixel art tied everything together. The only thing I didn’t really like was the humor. We all have different senses of humor, so this might not even be a problem for you, but I just felt it leaned way too much onto breaking the fourth wall and toilet humor. I also a bit disappointed that Krakovitz and Akiro didn’t have different lines, as it would have been interesting to see how they responded or thought differently, but it’s fine.

I’d say if you’re looking for an interesting point and click adventure and is someone that tolerates or can’t get enough of toilet humor and not tired of games (or other bodies of work) breaking the fourth wall, yah pick this up. There’s a low chance you’ll be disappointed.