A cyber-ninja running and slashing his way to the top of a neon tower.

If one were to compare Ghostrunner to other games, one wouldn’t know which to pinpoint most accurately. Mirror’s Edge and Titanfall for the parkour? Hotline Miami for the music combined with a violent die & retry experience? Or even Super Meat Boy, for tough platforming sections to memorize and an uncompromising difficulty? Let’s see in more detail what Ghostrunner has to offer, but let me warn you that the cyberpunk atmosphere is not a reason alone to slip into the shoes of a cyber-ninja: you also need the skill level that goes with the job.

Upon launching Ghostrunner for the first time, I was immediately awed by its world. We start with a violent drop-down kill surrounded by gigantic dark buildings adorned with colorful neons, and soon after the rain drips on the screen. This game is splendid, and the gorgeous neon city runs smoothly on an aging system. The art design of this game is so fantastic, that I had to open this review by emphasizing how impressed I was. From the colors of the city to the subtle hints showing the path to its players, the mastery here is undeniable. Finally, Daniel Deluxe’s synthwave/darksynth music is a perfect soundscape to the violent exploration in the bowels of the futuristic tower. 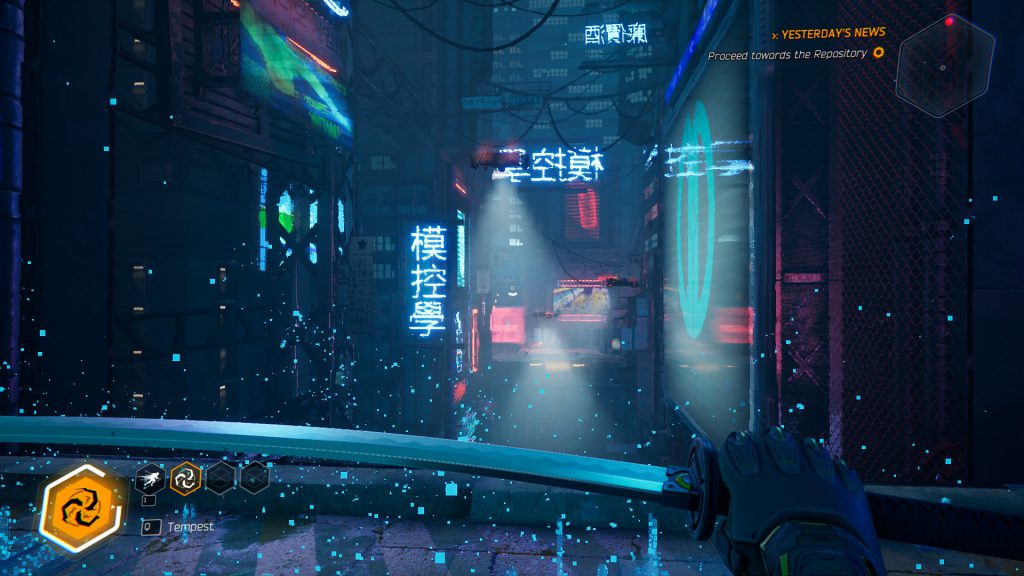 I still have shivers down my spine when thinking of the awfully boring story-telling cutscenes in DOOM Eternal compared to DOOM (2016)… Conversely, Ghostrunner’s cutscenes are short and sweet, just to get a good look at a character. The rest of the story is told while playing, through the conversations of the main cast: the Architect accompanying Ghostrunner 74 on his adventure, a human named Zoe, and the Ghostrunner himself. The voice acting here was better than simply solid: the voices and their delivery were perfect to further get immersed into Ghostrunner’s world. The story itself is not earth-shattering (go kill the evil lady who took over the city), but the characters are well fleshed-out and we want to know more about them and their fate. For further details about the lore, secret items to discover give little insights into the inner workings of the city. 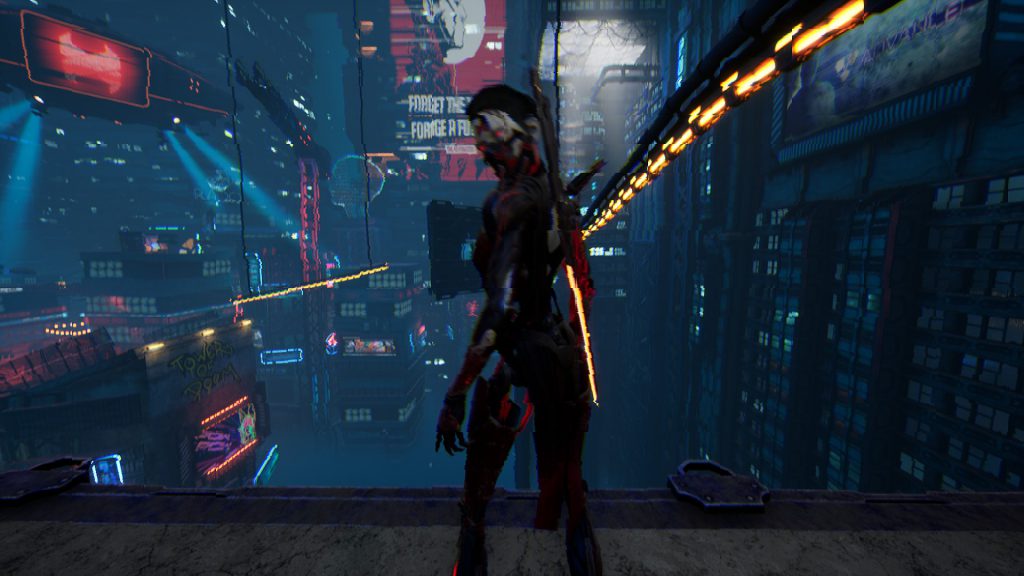 Movements in Ghostrunner are incredibly smooth without requiring complicated controls, therefore they can be performed almost without thoughts. Our character can jump, dash, and slide, but also grapple on high rings (right mouse click) to quickly travel long distances and reach higher ground. After jumping on a vertical surface (such as a wall), he will automatically keep running straight on that surface. There are also rails that he will automatically grab, which is another way to quickly move from one point of a level to another. The control scheme is very simple and yet allows for very precise fast-paced navigation across the levels. Finally, dashing while in the air triggers a slow-mo effect, allowing to carefully pick a surface on which to land, or the ability to dodge something dangerous. To complete the slash attack with the katana, a focus meter can be used to trigger special attacks acquired during the adventure. 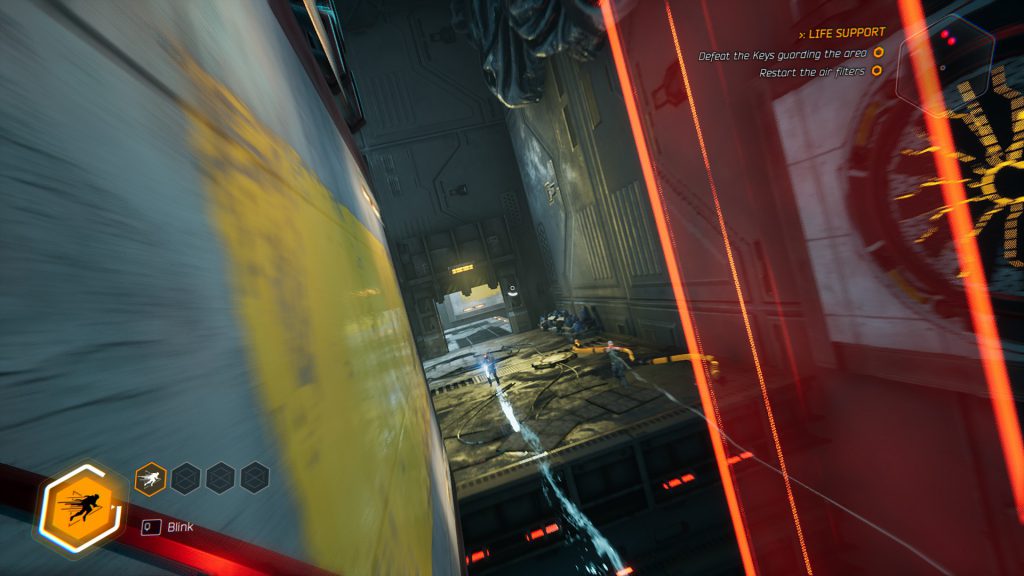 Danger comes in the form of level hazards, but also a bestiary of baddies with each their own completely different ways to attack (projectiles, dash, shields, and so on), although they all die from one slash. And this is where things start to get interesting… and also substantially difficult. The enemies in Ghostrunner benefit from incredibly precise aim and quick reflexes. The smallest fry can kill you faster than the blink of an eye, leaving you scratching your head as you try over and over to get past them. And then when the stronger types of soldiers and machines show up, you know that you will suffer. This is where Ghostrunner will be divisive: if you are looking for a power fantasy, this won’t be the case here. Your character dies from a single hit, and no matter how fast you are, getting close to an enemy is most often a death sentence. Now consider the following: for the game to save your progress, you will need to dispatch a whole bunch of enemies within a limited space. This means that you need to perform a difficult series of kills before being allowed to progress, and if you are not skilled or at least willing to put in the effort to learn the sequence of moves that will bring you to victory, chances are that you will very quickly get stuck in Ghostrunner, unable to get past one fight or another. There is no easy mode to alleviate this for those who only want to experience the universe and enjoy the feeling of parkour. Before disserting more about the choice to make Ghostrunner so hardcore, I will briefly mention that all enemies can be eliminated once you figure out how they work and how to deal with them within the context of each situation, but the one enemy type that I hated completely were the exploding horrors toward the end of the game. Our ninja focused on melee cannot get close to them, and sequences with them get frustrating real quick. Sometimes there are specific ways to get rid of them, but many encounters are simply painful and not fun. 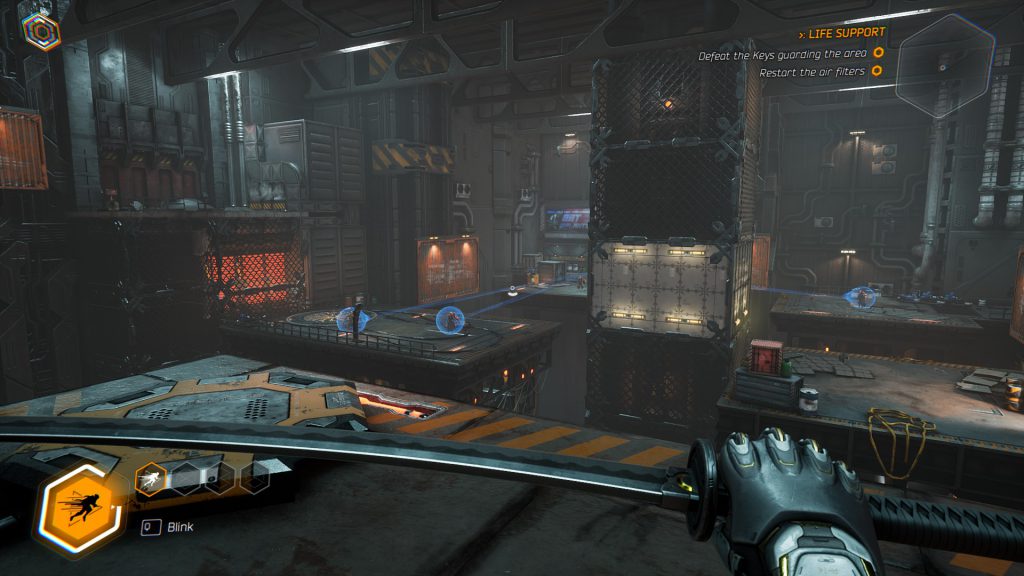 To enjoy Ghostrunner, it is mandatory to embrace its die & retry gameplay. And I did have fun figuring out how to approach a combat sequence then executing my plan, especially as there is no unique solution forced by the game: different elements in the level give the freedom to parkour all around the enemies. However, the game gives very little leeway once getting close to an enemy. As you can see in the video illustrating this article, I tend to try as much as possible to play without using slow-mo, because I enjoy more fast-paced flows than being forced to slow myself down during a fight. In Ghostrunner, this is almost always suicide. I did not feel the dynamic of freeform chaos like in Hotline Miami, having to quickly adapt to a change in the situation but still prevailing because of my fast thinking and reflexes. Ghostrunner feels closer to the most difficult levels of Hotline Miami 2, as you have to approach combat more like a puzzle to solve quickly rather than brute-force your way through sheer skill and fast reflexes alone. Death comes too easily to really get into a nice flow, and without Daniel Deluxe’s powerful beats, I might not have enjoyed my time here. While Ghostrunner is fun for hardcore players seduced by its tough-as-nails approach requiring careful planning and quick execution, there is a missed opportunity here. There are all the elements for a fun FPS adventure with incredible combat, and all that is missing is less competent enemies to let players strafe through them with just a little more ease. Still, I can’t blame Ghostrunner for its focused choice, as it does exceedingly well what it set out to do. Except for the daunting boss fights, as Ghostrunner will lose half its audience with the difficulty spikes experienced there (strangely, the final boss fight is easier than the others, thanks to frequent checkpoints). 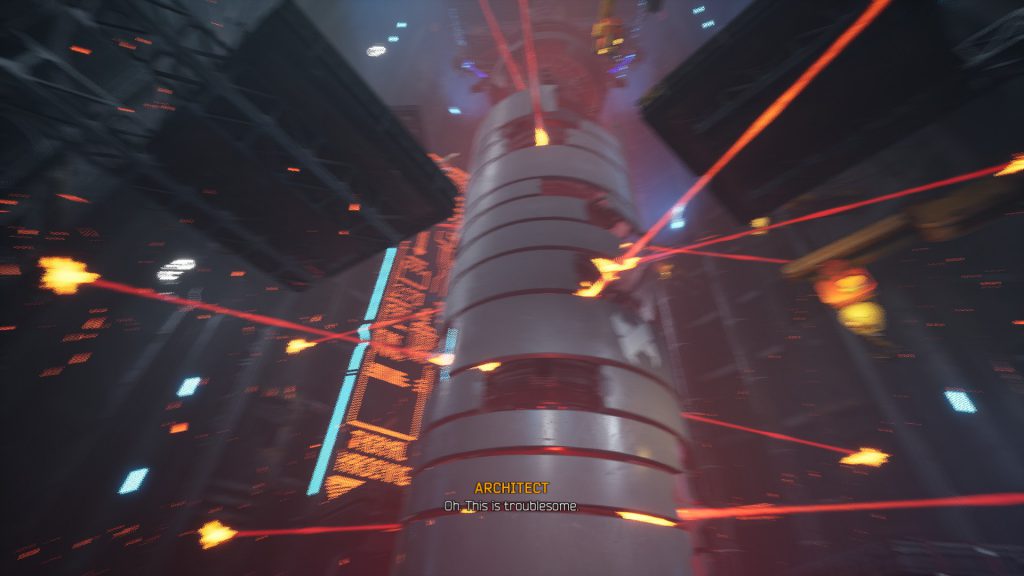 There are four different types of sections encountered during Ghostrunner’s 8 to 12 hours-long adventure: parkour sections, combat sections, puzzle sections, and boss battles. The puzzle sections take place in the cybervoid, a virtual space focused on navigating strange levels rather than using parkour abilities. While I appreciate having the occasion to breathe in-between fast-paced levels, some of the cybervoid sections can be too frustrating to be enjoyable. I have two main culprits in mind: the cubes changing gravity ask for too many orbs to collect, and the confusing corridors that lead to geometrically impossible doors are a pain to figure out while all I wanted was to get back to the adrenaline-pumping running and slicing. 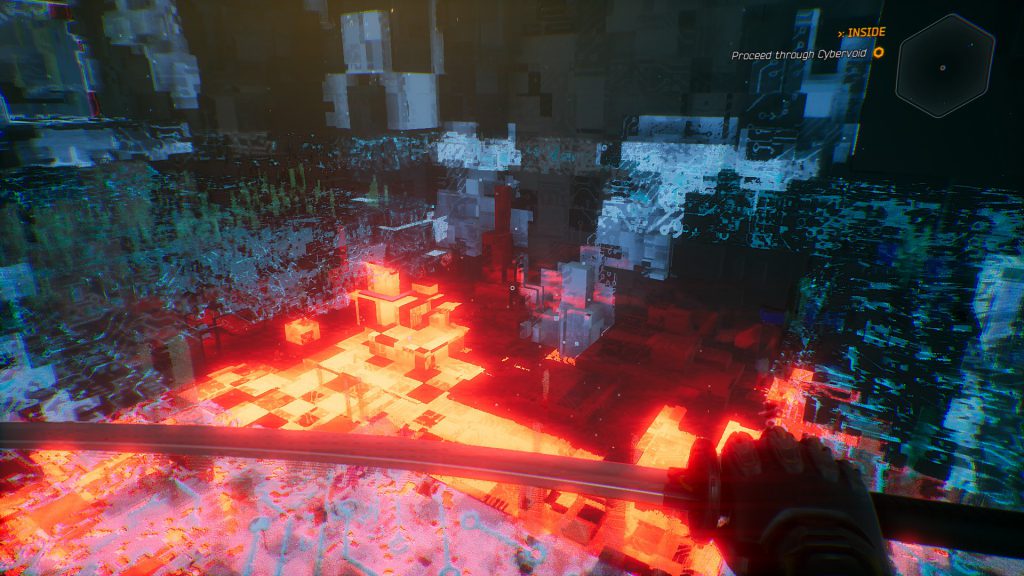 Ghostrunner is slick, polished and ambitious, but its choice to go for hardcore players only will disappoint those who simply wanted to experience its gorgeous cyberpunk setting and have fun with exciting cyber-ninja abilities. However, if you accept that Ghostrunner will combine the difficulty of die & retry platformers with first-person melee combat geared like a lightning-fast puzzle to execute, you will have an incredible time with this game. A top choice for speedrunners.