Trek across the galaxy while controlling an armada of drones.

It has now been a while since I grew tired of military strategy games with base-building and resource management. Just give me armies directly, and let me fight immediately! Since then, I always keep an eye out for real-time strategy (RTS) games with new and original game mechanics that do not rely on the old formula. And I am in luck, as Drone Swarm gives me exactly what I have been looking for, and then more with its original concept of drawing with the mouse to give orders to the drones.

Earth has been ravaged by an unknown assailant using an armada of drones, and for some reason psionic humans have managed to hijack the 32,000 drones. After seizing the mothership, humanity’s last hope is now to find another habitable planet, which means a trip across the stars! However, it appears very quickly that the galaxy is already teeming with activity, as we stumble upon several warring factions of alien species. This will be start of a cringey journey, from the comics-style cutscenes with weird facial animations to the worst series of decision-making I have ever seen in science-fiction. After suffering through the dialogues, I was quickly rooting for humanity to be left to die, deeming that they deserved it. Here is an early example: “Two alien races are fighting, but let’s just show up right in the middle of them and scan the nearby planets to see whether they can be our new home. Oh, you don’t like the rationale of finding a new home in enemy territory? No worries! They will never notice us. Uh-oh… Everyone, to battle stations!” Or that character sometimes lamenting at the horrible things other alien races do, in between missions in which she simply jokes around while committing war crimes. Let’s just say that I will not recommend Drone Swarm for its story, which is fine as in video games I am more interested in game mechanics. 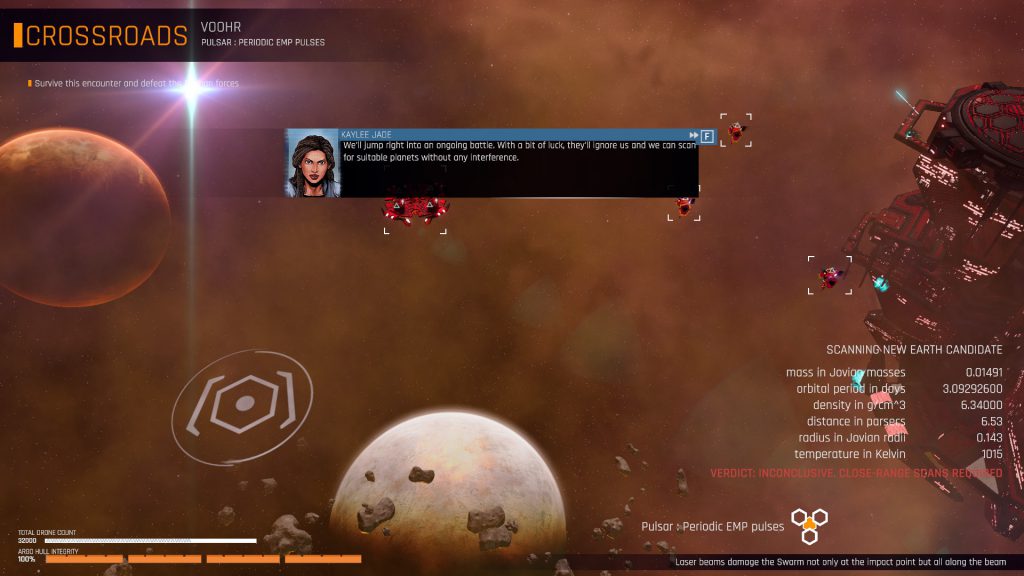 Added to the tone-deaf dialogues are the numerous technical issues, such as communications from the mission being delivered over characters talking during a cutscene, mission communications simply disappearing too quickly to be read, cutscenes showing progress in the story and then the end screen that takes us back to where the characters were before the cutscene, transported materials that are visually left behind, or even mission triggers that are missing and leave no choice but to restart some missions. Missions with many alien ships can also negatively impact the framerate. Overall, there is an alarming lack of polish for a game released at its current price of 20€ / $25. 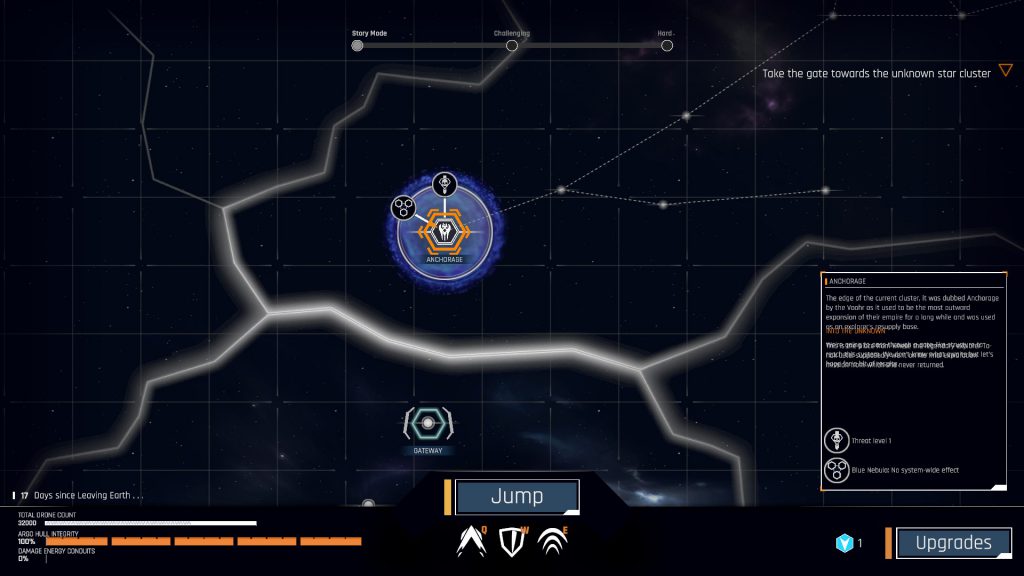 Drone Swarm puts its player in control of a stationary mothership, the Argon, whose death means failing the mission (missions can be restarted, this is not a rogue-lite game). The mothership gradually gains upgrades such as railguns and disruptors, but it is never under the player’s direct control. Instead, you are in charge of the 32,000 drones, by default hovering around the Argon. If you draw a pattern with the mouse, a number of drones will follow your directions (depending on the length of the trail that you leave, upgrades, and the availability of free drones). At the start, there is just an attack pattern, but there quickly comes the possibility to erect walls of drones, and then the ability to focalize them in an area to push or burst out, as if they were a shotgun. This can be used to push enemy ships into gas fields, or asteroids into enemy ships. An upgraded version allows to leave small patrols of pushers, which is incredibly useful against enemy destroyers that are attempting to stand still to charge their lasers. Drones which accomplished their mission eventually come back to base, but you can speed up their return by cancelling any order with the right click. Q, W, E and R are the keys to press to change the type of orders that you will give next. An active pause to give orders while freezing the game would be nice, but this was not implemented. 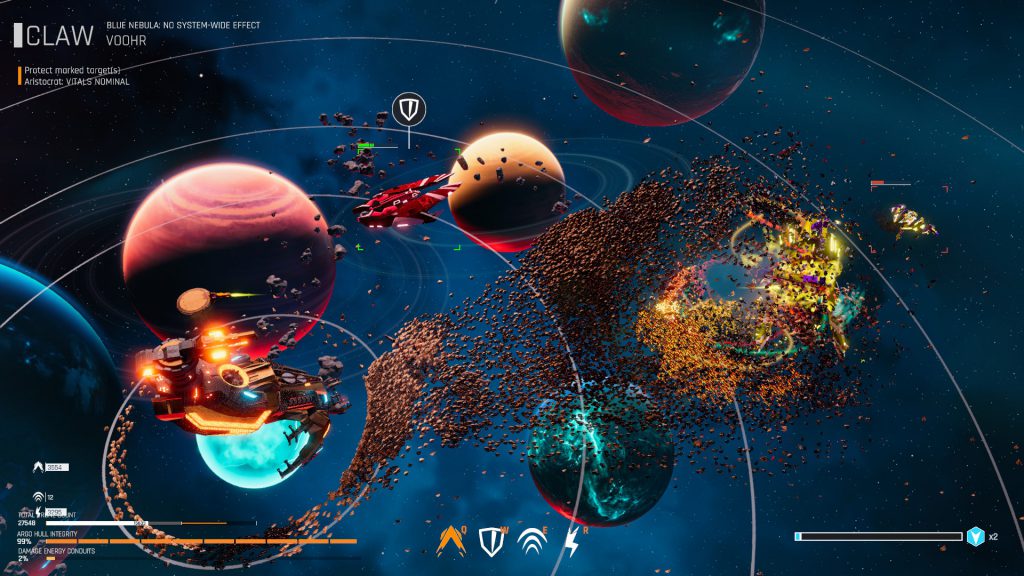 The orders to give with the mouse make for a very tactile feel to the fights, as you quickly draw defensive patterns around you and attack patterns around the enemy ships. The small toolkit of modes gradually expands to accommodate for more subtle and intricate controls, and it can be incredibly versatile. For example, it is possible to use a shield of drones in front of an enemy to force its missiles to inflict self-damage, or to draw a formation of shields in the trajectory of small enemy ships to hinder their movements and effectively trap them. 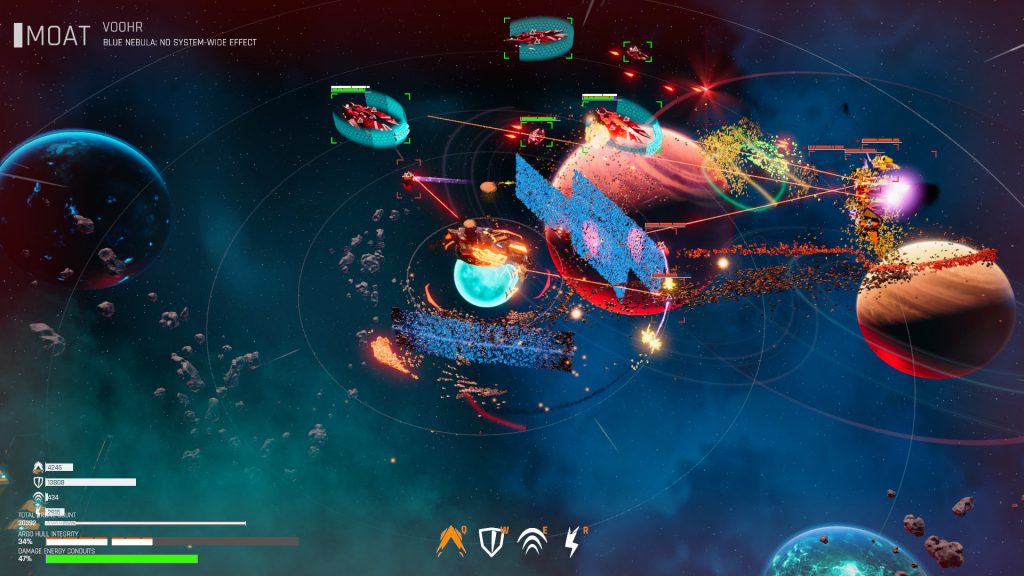 Different enemy ships have different ways to move and attack you. I mentioned earlier destroyers that require wind-up time for their incredibly dangerous lasers, but there are also small ships interfering with your defenses, or motherships staying in the distance while constantly spawning smaller vessels. I only regret that the ships look very similar to each other, and there is no bestiary/encyclopedia to remind players of each ship’s characteristics after their first introduction. There is some variety in the enemy factions and their ships, and the missions can also provide some modifiers such as dangerous areas, asteroids and ships to protect/escort, but overall, it can feel repetitive to always be repelling incoming waves of ships until the mission is over, contrary to being on the offensive and finding tactics to break through enemy defenses; as the Argo does not move, this sort of scenario never happens. Perhaps controlling the ship would have worked against the fluidity of the control scheme, but it might have been necessary to figure out a way to elevate the strategic layer of the battles, and to give players more agency in this game, which cumulates with the lack of agency in the main story, experienced in a passive manner while being frustrated by the characters’ decisions. 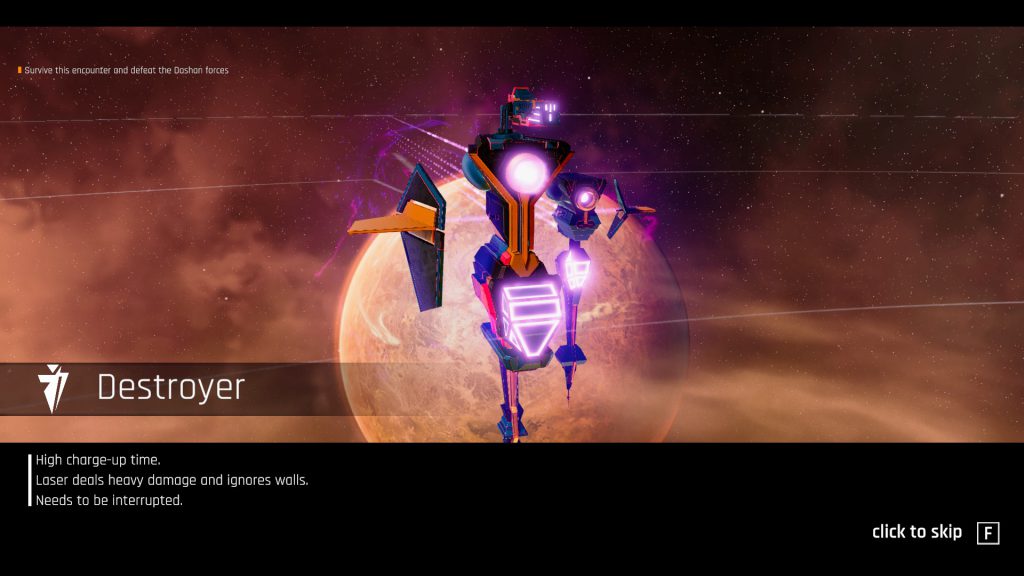 There are several difficulty modes, and I must admit that even normal difficulty (termed “Challenging”) required so many restarts that I spent most of my campaign on the “Story” difficulty. The initial missions give a false sense of security, and then the difficulty curve becomes pretty steep until the player has unlocked many upgrades and learned to use the game mechanics effectively. Sometimes I was frustrated by difficult missions and wanted to call it quits, before feeling super powerful in the next missions and feeling compelled to keep playing. Roughly, it takes 8 hours to finish the campaign while completing all optional side-missions to unlock all upgrades. Some will regret that the new skills are unlocked in linear fashion according to the missions, but I preferred that to a tech tree that would have pushed me to specialize instead of exploring all the functions permitted by the game. 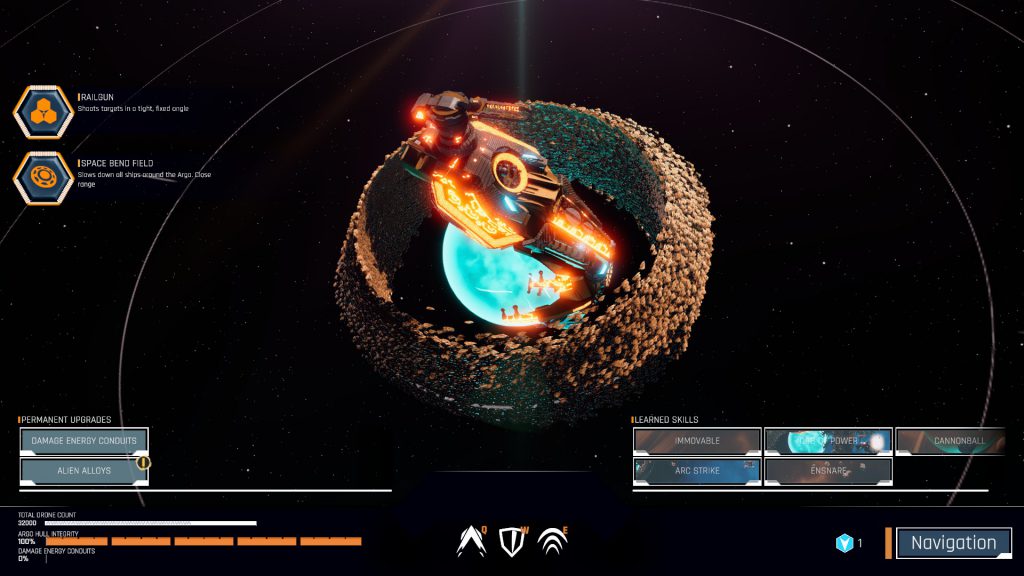 Drone Swarm feels fresh and novel, and I enjoyed controlling an armada of drones by drawing trajectories with the mouse. The gradual increase in skills and power gives a satisfying feel to the progression, allowing for more intricate tactics. I have never played anything like Drone Swarm, and I cherished that experience. However, this game feels too rough around the edges to truly convince most players. Those seeking an immersive story will be left most disappointed, while others might bounce against the repetitive nature of the battles, focused entirely on defensive tactics and lacking variety in the higher-level strategies of the encounters. If you simply want to feel something new, then I suggest that you give Drone Swarm a go when it is on sale.