Maybe the aliens wanted some parents of their own?

Phoenotopia Awakening puts you in the shoes of a young orphan girl named Gail. She lives in a world where centuries before a Great War destroyed Earth to the point where life couldn’t be sustained and it’s only until recently that humans came back to the surface to re-establish their communities through new countries. On the day we join Gail, she wakes up from a nap to needing to gather the other orphan kids for dinner. Of course, they aren’t just playing outside but out hunting for a fallen star. You track them all the way to Anuri Temple and after going through the dungeon and defeating your first boss, you find out that it’s a robot head. However, this is just the start. On your way home, you witness a mysterious spaceship hovering over your town and learn that they abducted all the adults. Thus, starts your journey to figuring out who and why they took all the adults, get the robot head fixed to see what it knows, figure out how to save the parents, and help others along the way. 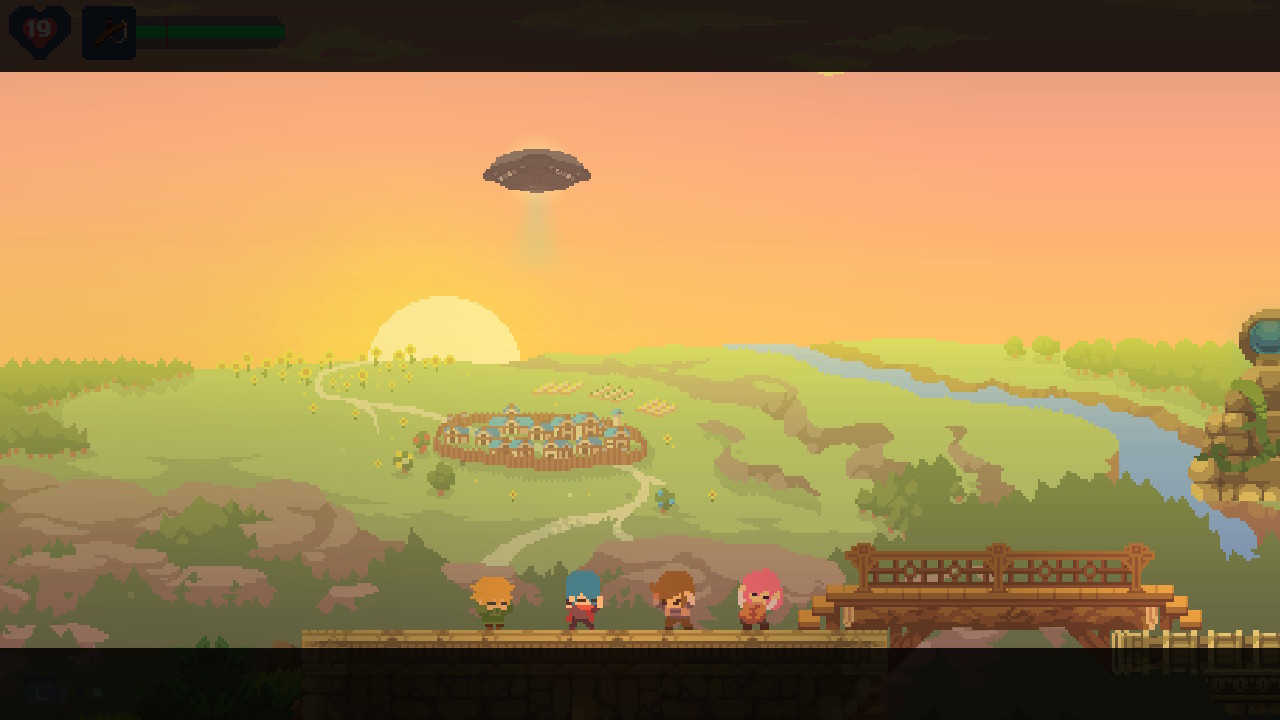 I’m just going to outright say that this game is difficult, most likely more than you’d expect (certainly more than what I expected). When you’re in areas other than towns, you’ll inevitably cross monsters or other humans that will attack you once spotted. To defeat them, Gail is equipped with a bat for a melee weapon and a slingshot (and a crossbow later on) for range attacks. Every attack you do depletes stamina, as well as running, and once it’s below a threshold you won’t be able to attack. It’s only when you stop trying to use actions that deplete stamina will it start to replenish. It also doesn’t help that you need to be up in your enemy’s face if you want to hit them, so you’ll need to learn how enemies attack, about how often it takes between attacks, and the queue that the enemy is winding up their attack. The bosses, which are harder to deal with, are more difficult, but they have clear patterns that you can take advantage of. Though, that doesn’t mean you won’t still die a ton. I admittedly took some breaks once I just couldn’t get past a certain section only to come back with some tips. The combat difficulty pretty much stays the same throughout, with some spikes in difficulty. You can of course run away, but there are situations where you can’t and you need to be good at dodging.

Other than fighting, you’ll be exploring the vast land. Most areas are connected with a world map where you can guide Gail and dodge enemy icons. Though, the downside to this is that it’s sometimes difficult to tell where you can actually enter even on towns you need to get to for the main story as the cobblestone indicator can blend in easily. Though, there are a lot of hidden locations to explore. There are puzzles for you to solve, places to platform to and see where it leads, and npcs to talk to and papers to read to learn more about the world, get humorous lines, hints to what you’re going to face, side quests to do, and even be given items. 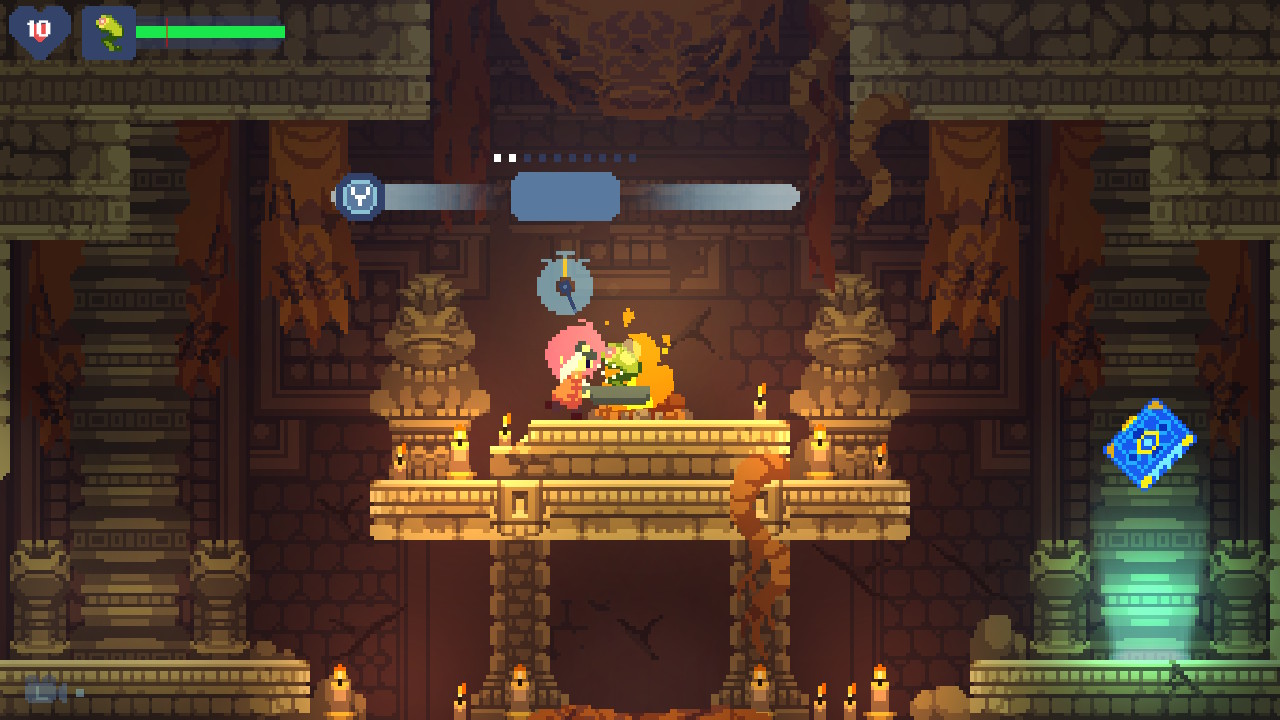 To help you survive longer, you have two important tools. You will either find food or monsters will drop some and most can be cooked over fire. Cooking will have you pressing buttons as the cursor reaches the middle and will increase speed and how many buttons you need to press as the health benefit increases. I highly recommend cooking, partly since you do have limited pockets and if you successfully cook it you’ll get more health once you eat it. Though, if you fail it’s best not to eat it. However, eating will require you to equip it and spend time stationary to eat it as each food item takes a certain amount of time to eat. I honestly really love the animations with eating, but it can be difficult to squeeze it in especially during boss battles. You can also fish with a trusty fishing rod. All you have to do is to make sure a fish sees your hook and the first one that does will bite. You’ll then go into a minigame where you’ll need to keep your cursor within a patch of green in a radar. This does deplete stamina if you’re not in the green and you’ll fail once you’re out, but getting the fish will reward you with food. This is a great source of food to cook or a source of money to sell as fish will respawn and there are at least one area you can fish at in a region. 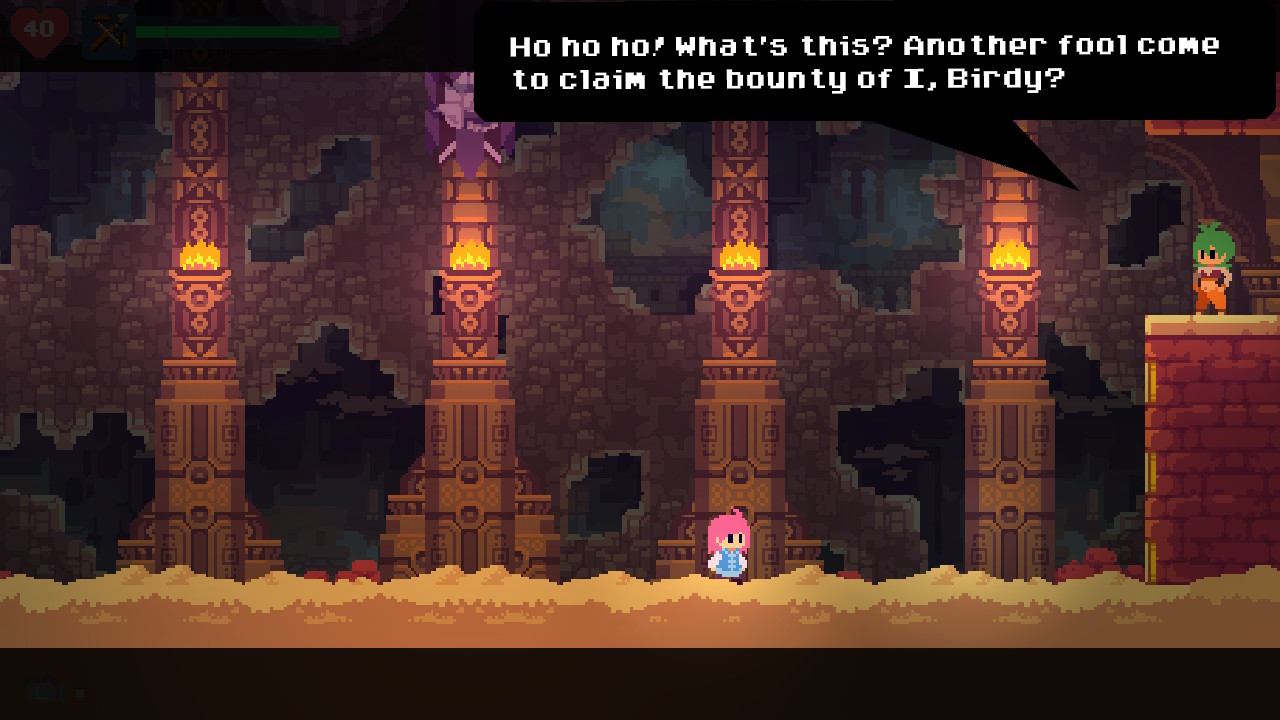 Saving is especially important to keep your eyes on. Instead of being able to save anywhere, there are designated save points scattered around. And trust me, you will want, no need, to save as often as you get the chance. Even if you think you’ll be fine, save just in case. You do not want to pass various save points as you gather food or do side quests and then die. There are also areas where there is a long stretch between save points so it’s best to gather more than you think you need just in case. It’s best to save and be prepared too much rather than getting frustrated because all that work went down the drain.

Though, if you are having trouble there are accessibility options that you can enable. You can make combat a little bit easier by making it to where regular attacks won’t use up stamina, make cooking easier by having the cursor go slower, enable eating through the menu rather than in the overworld, and even making fishing high level fish easier. These don’t make the game a breeze, trust me the game will still be difficult, but it won’t be as bad.

In terms of whether or not the game tries to encourage you to go back to previous areas, or if it’s just linear, it does everything it can to encourage you to explore each area you come across and go back later on once you gain more tools to pass obstacles you couldn’t at the time. The collectibles here are used to help you rather than just something fun to find as well. The main collectibles are heart rubies and energy gems, which will give you more health and stamina respectively, and moonstones which can be used to upgrade your tools and enable teleportation later on. The other collectibles deal with the side quests, which in turn either rewards you with more hearts/stamina or something else that is useful like more money.

If you’re someone that would not rather go back to previous areas and just want to do the main story first, you can. It’ll make things harder on you, as you won’t have as much health to last long or stamina for attacks, but you’re not necessarily locked out. You’ll just need to bring a lot of food and get good at dodging attacks. 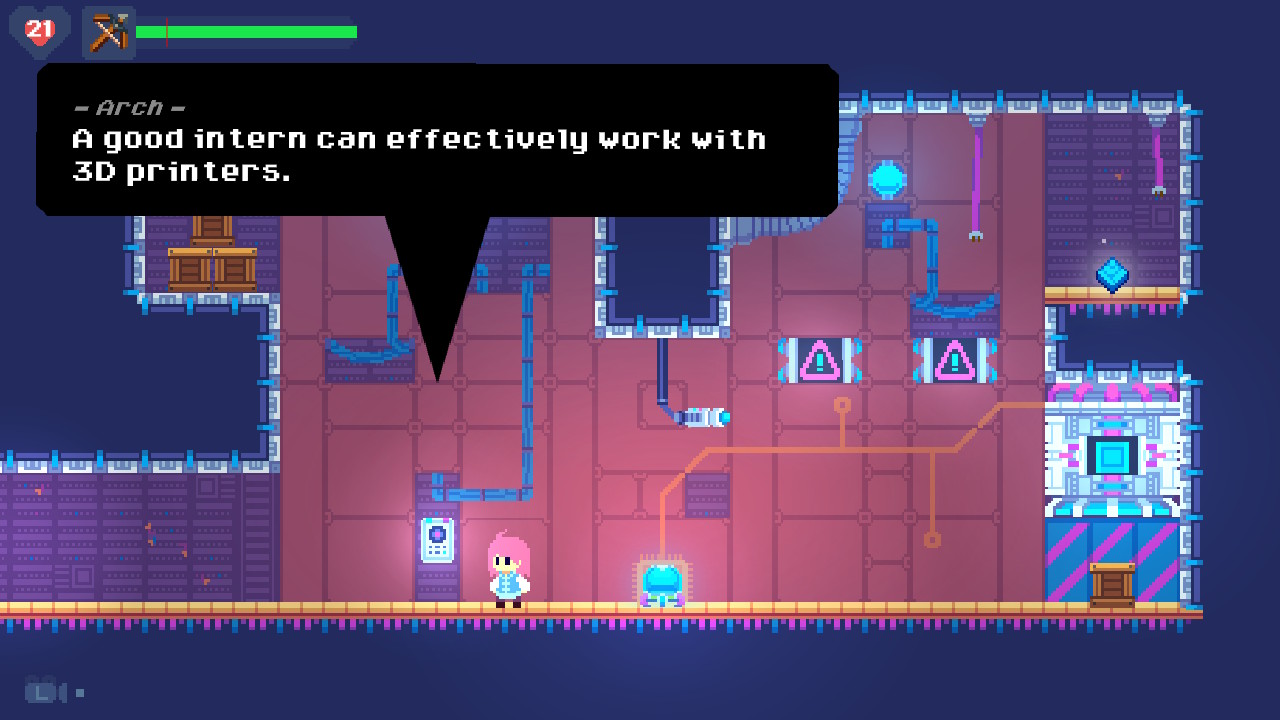 Lastly, I’m sure that you looked up this game for more information and found out about another just called Phoenotopia. So what’s up with this one? It turns out that this is a remake of the original flash game. So why should you even bother buying this one when you can already play it (well, other than Flash discontinue date coming closer every day). Well, a lot of changes were made to make it worthwhile. I didn’t play the original Flash game so I don’t have personal experience, but from what I’ve heard and seen, the art has immensely improved (like wow); added new locations, characters, tools, and mechanics; slight changes to the story and tweaks to existing characters; a new inventory interface (with a Gear Ring for easy access), new bosses (with way more optional ones being available), and bosses returning gets revamped both in appearance and how they’ll attack you. 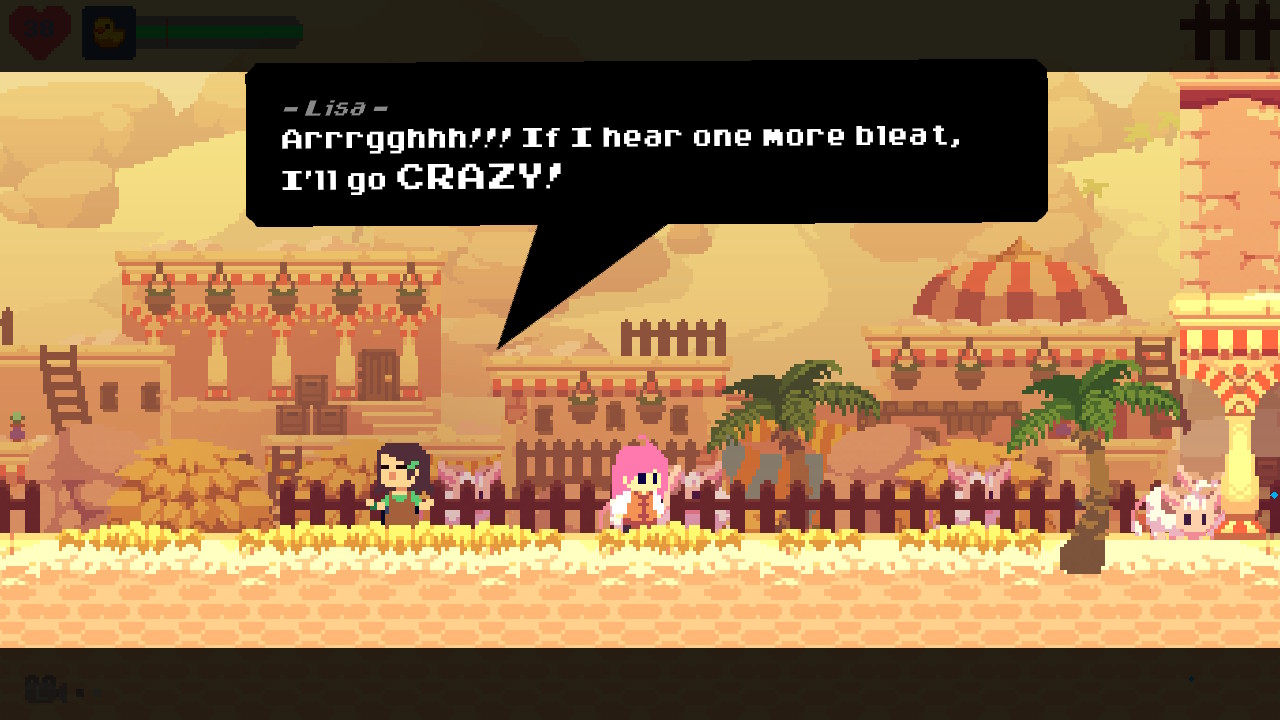 While Phoenotopia Awakening took a while for me to warm up to it, I can’t deny that it’s a great adventure game to jump into. There were only a few negatives that disappears as you continue (like having a way to track what you need to do to advance the main story gets solves), this got a gorgeous art update, the music is amazing, and really the only thing that will stand in your way is the difficulty. So if you’re looking for a more casual game, this is going to be more frustrating than anything. Otherwise, definitely consider picking this one up soon. While this is only available on the Switch, the PC release is still being worked on as well as the sequel (though from what I’ve heard it’s still a ways off).

For those that base their purchases on how long the game will last and wondering if the store page is telling the truth, I can assure you it is true. It took me about 25 hours to complete the main story and considering how much extra content you can do I can definitely see how it can take 50 hours to do everything.