Excellent 2D fighter, if you have the skill and the will to persevere.

I saw Superfighters Deluxe recommended several times in party game discussions. “Cool,” I thought. “I can try it out with my friends during our next single-screen multiplayer session.” Usually, party games should be picked up and enjoyed by complete beginners within a minute or two. Five minutes after launching Superfighters Deluxe, my friends were already beating me! That is, with their controller: as the in-game controls were too difficult, it was much easier to hit me in real life.

As I mentioned in the introduction, the controls are quite peculiar. The tutorial taught us to punch, kick, drop-kick, drop-punch, block, throw, hold and punch, hold and throw, roll, use items, tap a button to crouch and double-tap to climb down ledges, double-tap a movement key to run, then press crouch to dive. There is a lot to swallow, and our first minutes in-game were spent awkwardly button mashing to kill a baddie with bare fists. And then when it was time to use weapons, we lost it: right stick to switch weapons, not to aim! And there is a button to hold in order to take aim with the movement keys while standing in place. So complicated, so ineffective! Later on, I played alone and thought that the keyboard & mouse control scheme would be put to good use; I couldn’t have been any more wrong. Although it is possible to rebind keys, it’s not possible to access the mouse, neither for aiming nor for binding buttons! The controls are awful and complicated, and I was ready to dismiss this clunky mess… 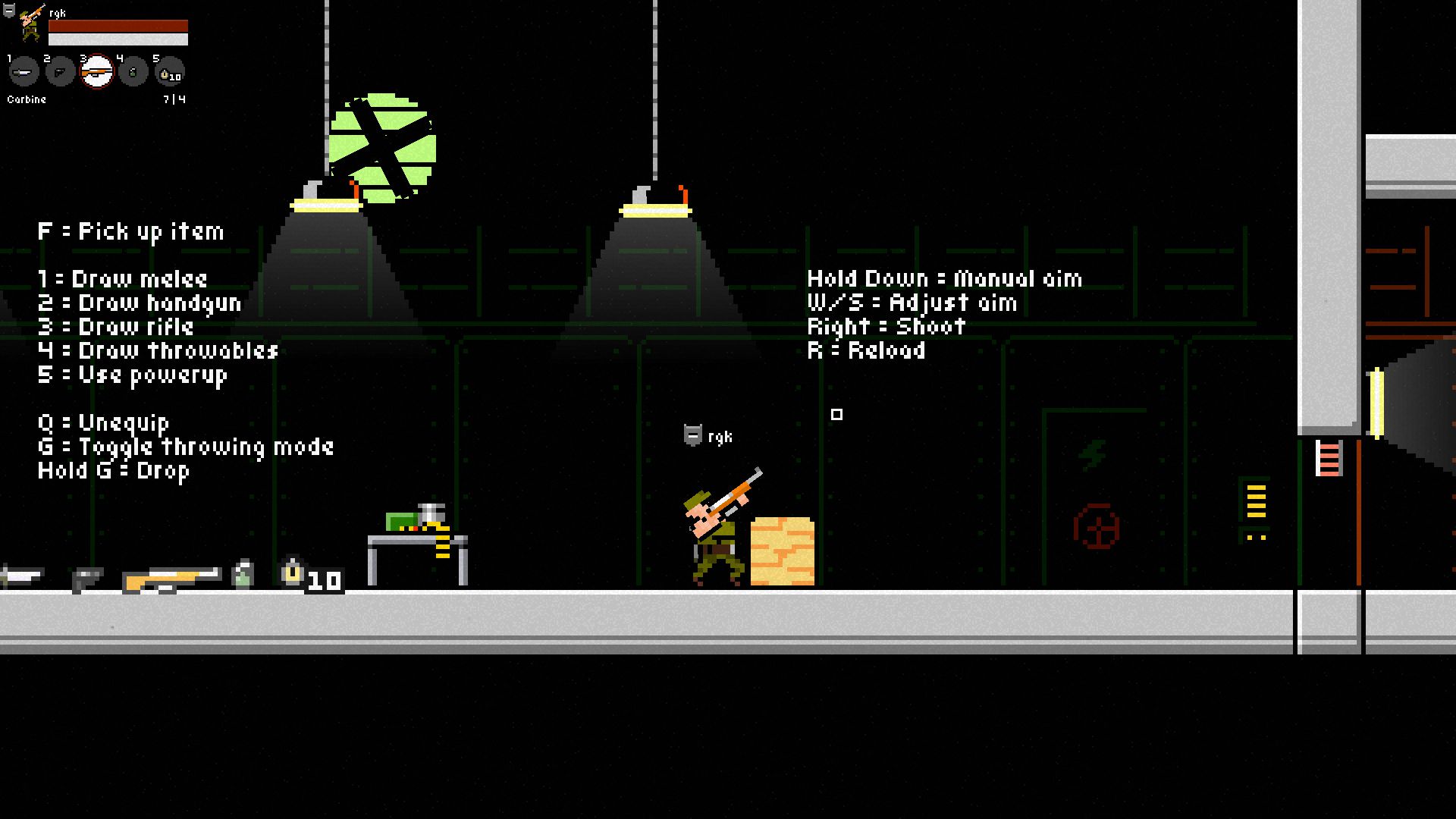 …until I tried an online game. You can see the result in the video accompanying this article: I certainly had my ass handed over to me, but some other players were incredibly impressive. Their movements were smooth, and they were showing off all the possibilities offered by the game to perform crazy moves, giving a very cinematic vibe to the game. That’s when I learned that our off-putting first impression was not because the game was bad, it was because we were terrible at it. However, I can imagine that it takes a lot of practice to reach that level of skill; Superfighters Deluxe has a steep learning curve. 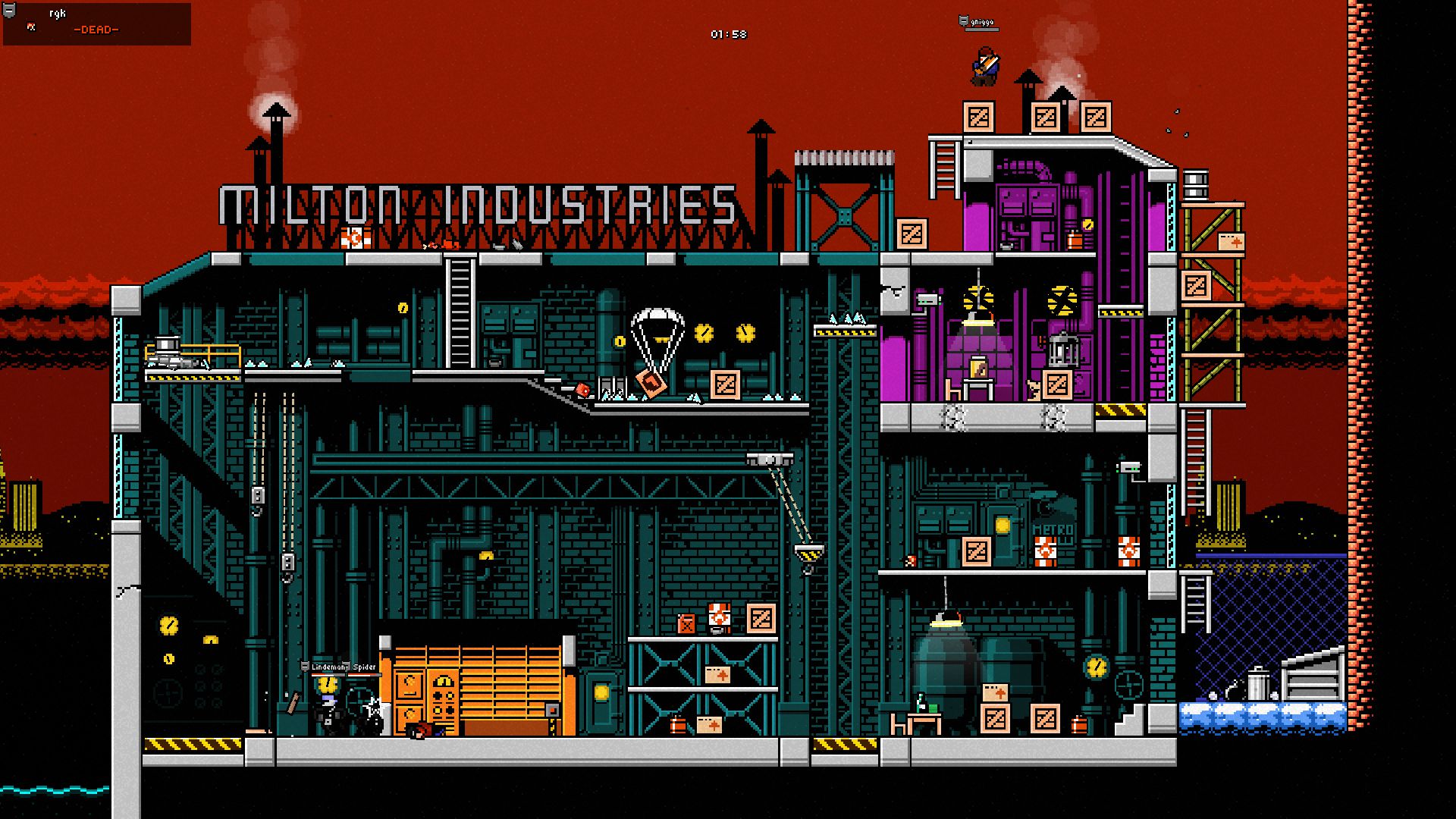 The graphics and levels are simple yet full of details, reinforcing the cinematic vibe. Frequent crates drop, and when split open they reveal one of the (many) weapons. Most often it takes quite a while to kill someone, it’s not a single hit-kill as in most party games. Eight players can fight each other in deathmatch, and the game can also split the band into several teams for a team deathmatch. Unlike many other similar games, there are actually people playing Superfighters Deluxe online, and this longevity is a testament to its complex and yet powerful combat system, its many levels and many weapons. When skilled players are fighting, it is beautiful to watch, especially as the levels are filled with ladders, lifts, crates for cover and explosive barrels for pyrotechnics. 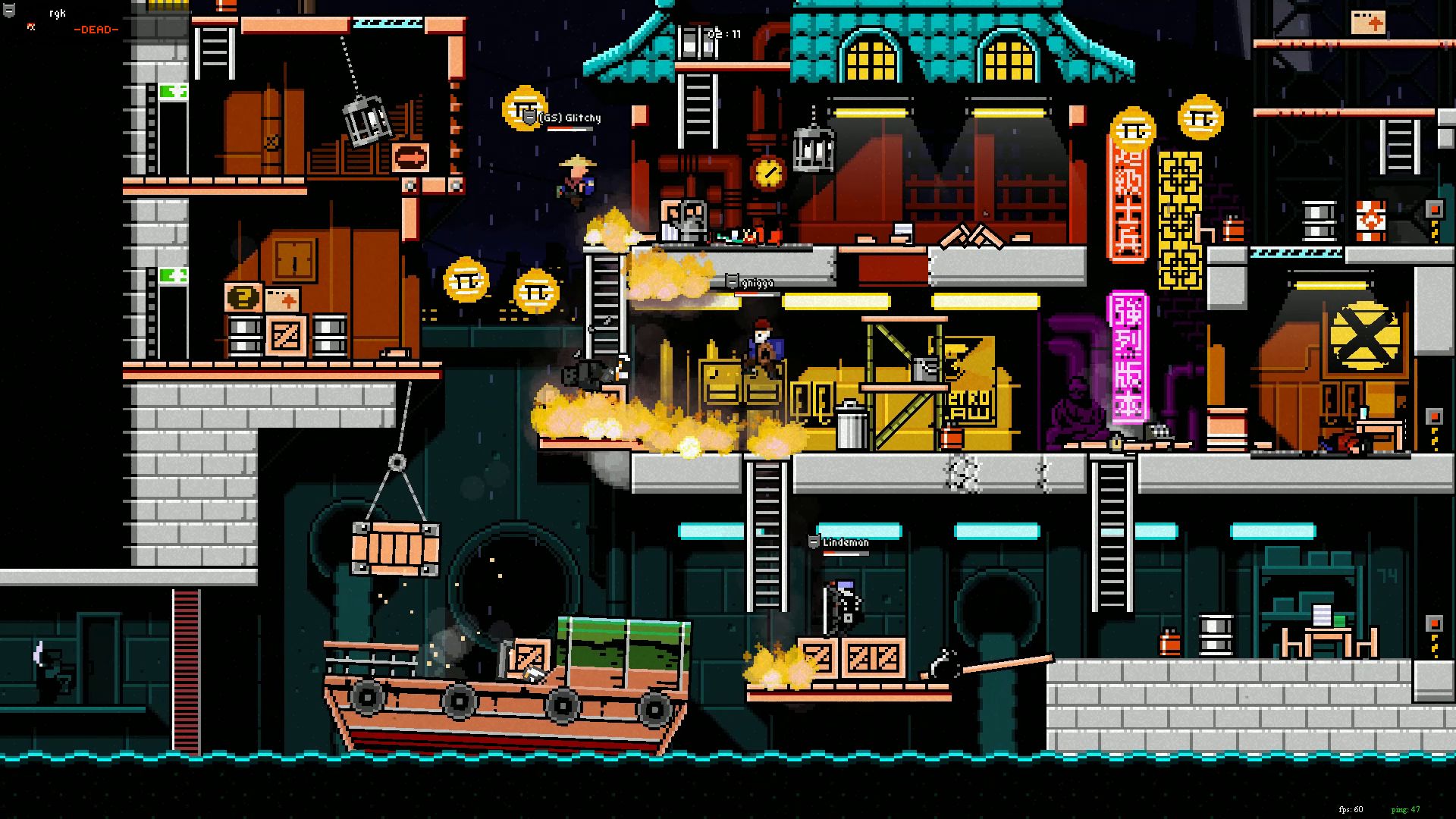 In additions to the deathmatch modes, up to four players can attempt the survival mode or the campaign, whether online or locally. There are also a lot of solo challenges, fighting against a bunch of AIs in many maps. If that wasn’t all, there is a powerful map editor compatible with the Steam Workshop! 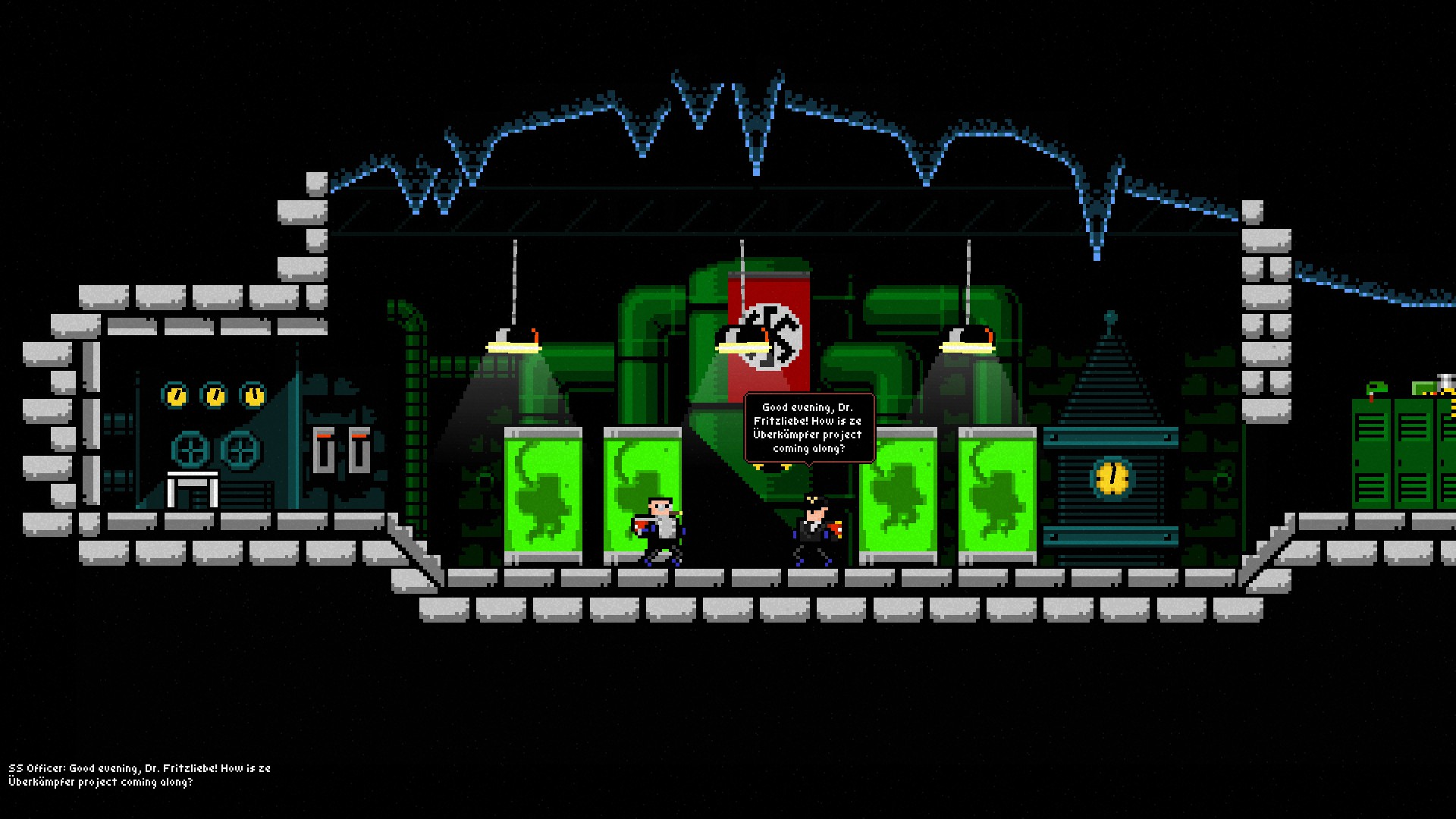 The first out of three campaigns that I played is surprisingly well made, with characters, dialogue, and a Wolfenstein vibe as a ragtag band of soldiers attempts to fight the Nazi regime during WWII. The dialogue is humorous, although the font can be too small to read. However, don’t expect a smooth and accessible ride: it’s pretty hardcore. The levels can be lengthy with no checkpoints and fearsome AI. There are tons of enemy soldiers, so it is often overwhelming. Just like the players, AI troopers have plenty of health points, and they are able to aim in all directions and even disarm the player. This made the fights all the more difficult and frustrating for us when we attempted the campaign… considering that we weren’t yet able to move and aim correctly in the first place. Oh, how I wish that I could use the mouse! 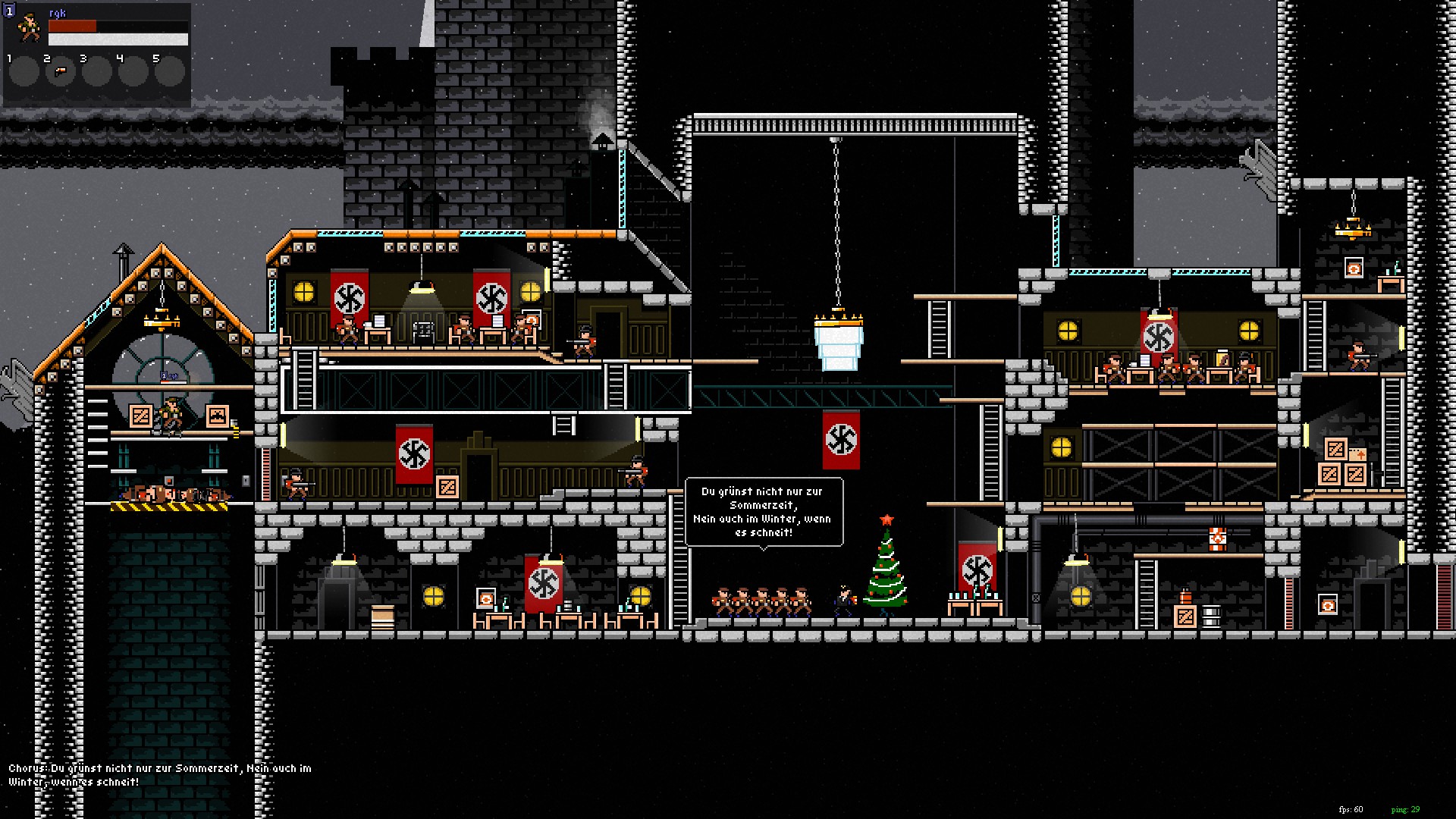 More ranting about the controls

Going back to the controls, here is some more detailed feedback on why I really couldn’t get into them, and likely never will as I do not have enough patience to stick around. I will use Guns, Gore & Cannoli as a case study. Guns, Gore & Cannoli, like many COOP games designed with controllers in mind, only features directional shooting for both the player and enemies. It plays perfectly well, move where you want then shoot horizontally. Metal Slug lets you shoot in diagonals, but it’s a trick when you switch from vertical aim to horizontal aim with the machinegun. Still, overall, it’s very intuitive: you shoot in the direction in which you move. Guns, Gore & Cannoli 2 was more focused on online play and understood that its players would gladly switch a controller for a mouse: it’s possible to aim smoothly in all directions. With the mouse, it’s as easy as pointing where you want to shoot, and with controllers it’s just like a twin-stick shooter: one stick for aiming, one stick for moving. It’s not as easy with a controller, so I prefer the first game for local play. Online, though? The second game is perfect. 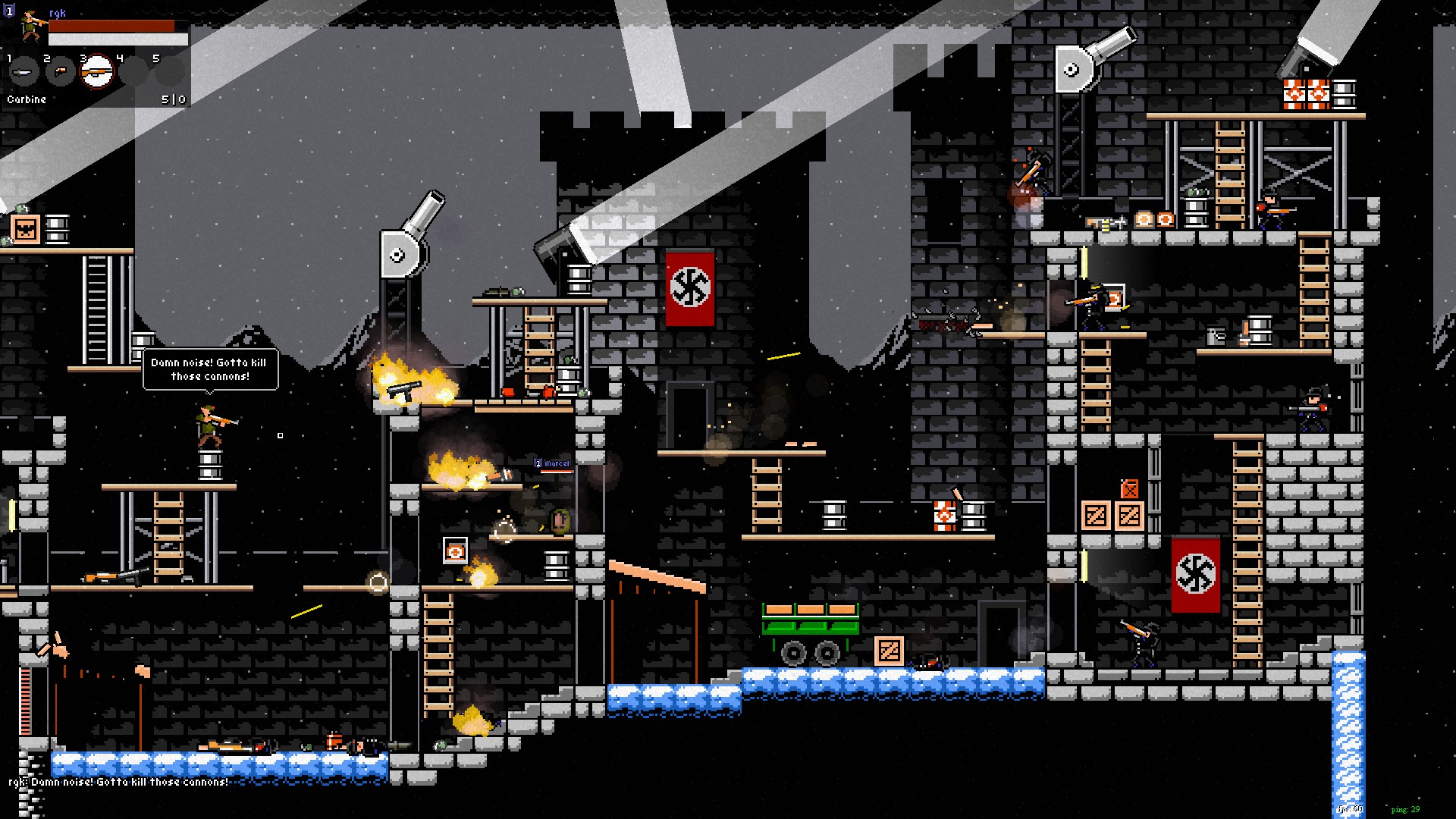 Superfighters Deluxe, however, sits weirdly in between. Everyone can aim in all directions, but not with the mouse or the second stick. The result is incredibly clunky to control, and, honestly, a pain. It’s neither as simple as a game with directional aim nor as smooth as a game with free aim. When playing the game, I was reminded of our wonderful time with Door Kickers: Action Squad. The gunfights were less messy, we felt completely in control. To summarize, here are the main two things that did not sit well for us when we played Superfighters Deluxe’s campaign: 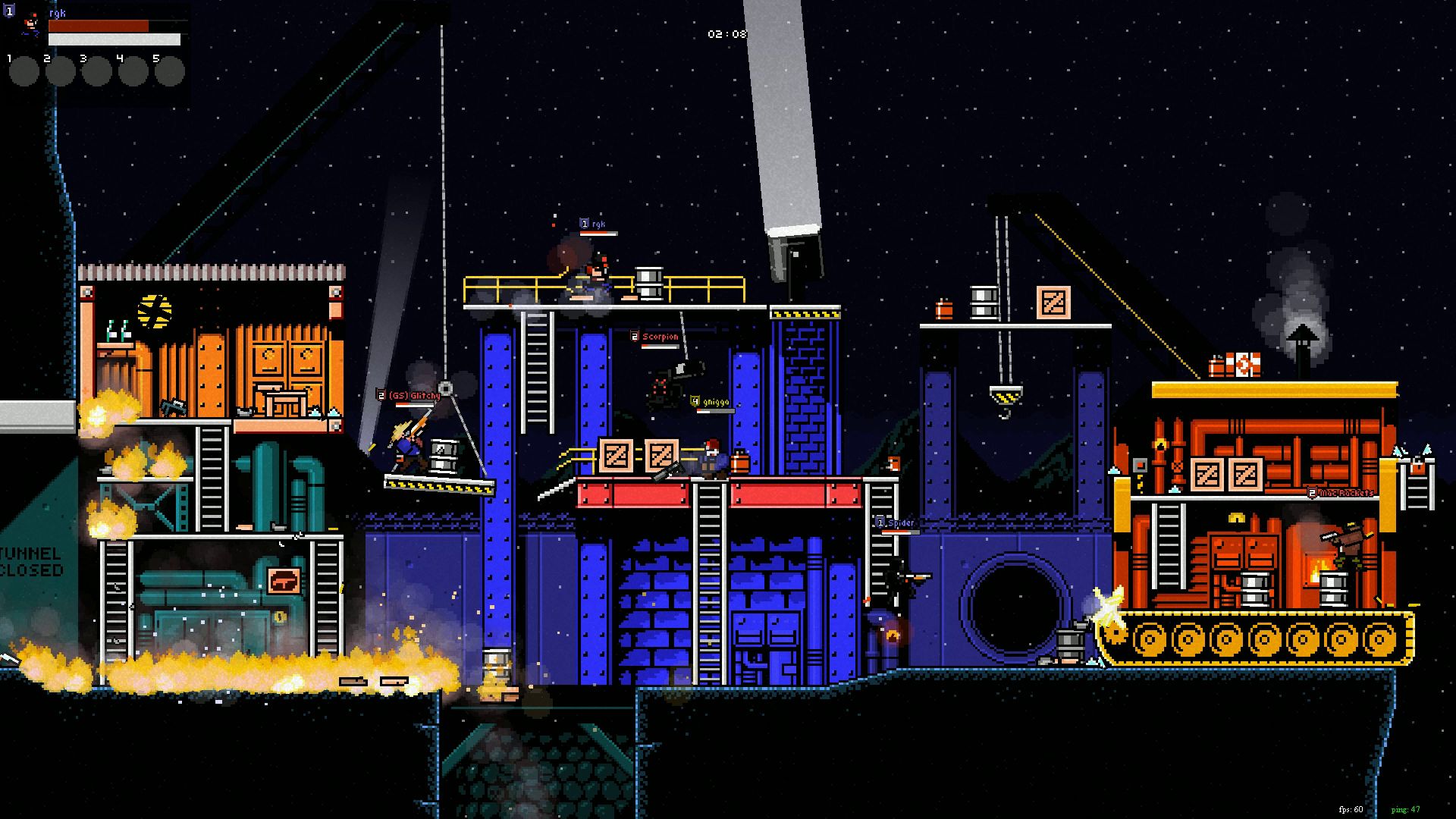 Superfighters Deluxe is a tough 2D fighting/shooting game. The lack of mouse controls or twin-stick shooting and the sheer number of possible moves make it very hard to control, but then skilled players that persist through the steep learning curve will get richly rewarded with a fun and explosive game in which they can feel as cool as an action hero from an 80’s movie. As a party game among experts, it has the potential to be as good as Duck Game, but I wouldn’t recommend it for beginners seeking immediate and accessible fun. Save it for bloodthirsty “pros” who will spend a lot of time honing their skills. If you belong to that category, there is plenty of content here to satisfy you, and fierce competition online.