REVIEW: Whispers of a Machine

Being augmented may make things easier, but good ‘ole detective work still needs to be done.

When the local police can’t seem to find their suspect, it’s time to bring someone new in for a fresh perspective. On the heels of a new murder investigation, you play as Vera Englund. Being a special agent in their Violent Crimes Division, the Central Bureau sent Vera to a little town named Nordsund. However, Vera was actually supposed to look into a murder from a week ago, not one that happened the day of. Considering that Nordsund is a small community, having two murders in less than a week is suspicious. 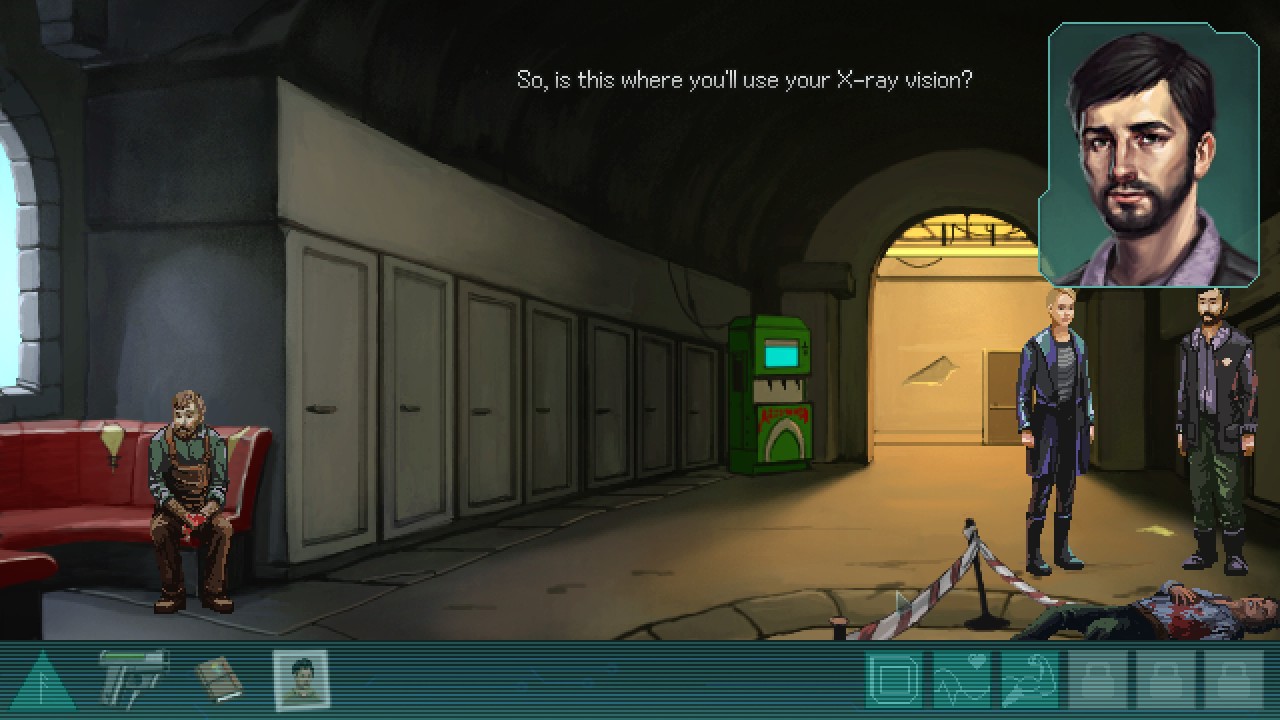 If the murderer suspected that they’ll get away scot-free, they’re wrong. Vera isn’t like the other cops running around. Due to her high position, she is cybernetically augmented with Blue (or nanofluid). This allows Vera to be way more efficient as an agent. With Blue, she can have enhanced strength for a couple of seconds (though it charges just as quickly), monitor heart rates just in case someone she’s interrogating is lying, and is her own personal scanner. The scanner, in particular, will pick up forensic anomalies, analyze it, and store the collected sample(s). From there, you can switch between the default (Smart Scan) to the sample you collected so you can detect it in other areas or confirm information. For example, if you plug in a murder victim’s sample, you can use the scanner to determine what is theirs due to a high concentration of fingerprints. Alternatively, you can see if the blood on someone’s hands match the murder victim’s or is their own. 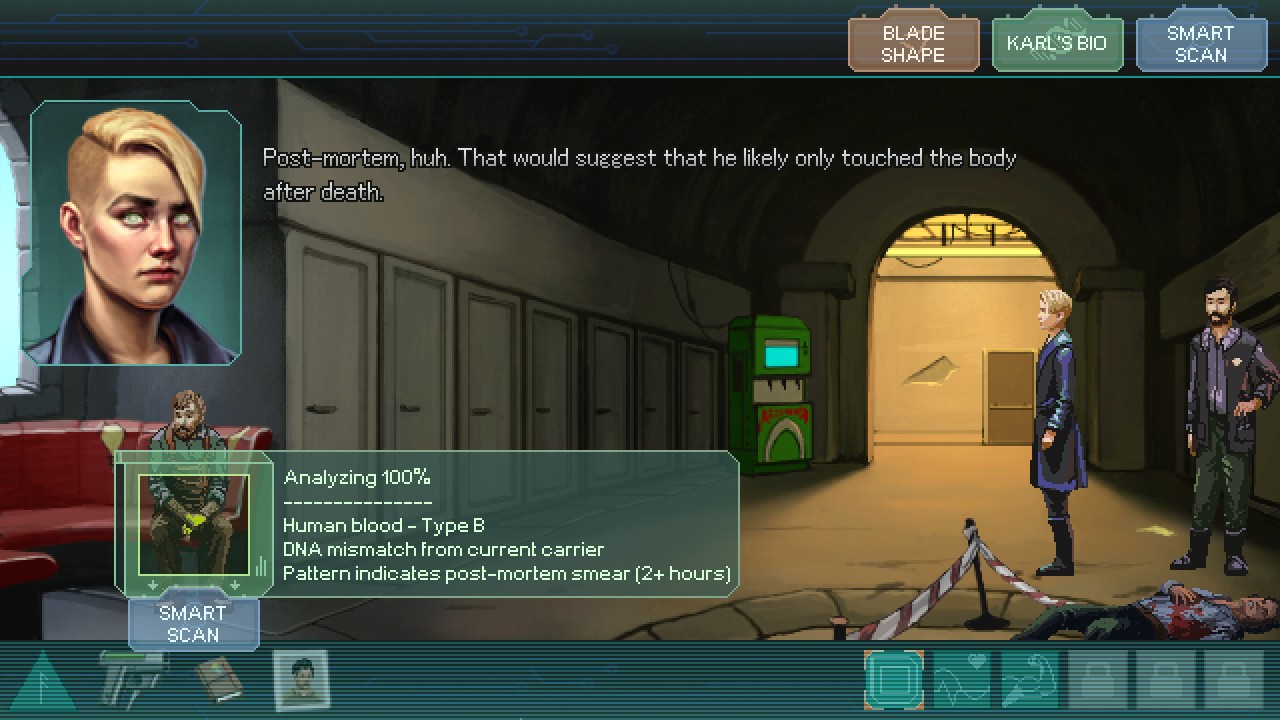 Once you have finished investigating the area Karl was murdered and interrogating the man who found his body, you’ll also be told that a Maja Strand was the first murder victim. Maja’s murder was actually the one Vera was supposed to investigate, but by the time she arrived Karl turned up dead. Unfortunately, the murderer made the right decision to kill Maja in the museum as the area was quickly cleaned. Though, you can still analyze her body at least. Once you do, this brings in a new slew of questions. Both Karl and Maja were stabbed to death and upon scanning, used the same blade (or at least, the same type of blade). This is further backed up by the mortician who suspected that these were premeditated murders by one person. If both of them are truly connected, then why would someone murder two people that seemingly had no previous connections?

As you continue to uncover clues to who your suspect is, you’ll also get some background on both the world and Vera. With a world set in a future where humans can be augmented, there is a lack of robots and any high tech equipment. Well, it turns out that Vera lives in a post-Collapse world. You won’t exactly know the specifics at first, but there are clues around Nordsund till the museum opens up for you. The only robots you see are replicas, ones a quirky man with a robot shop displays (which he also has to specifically say don’t have any CPUs in them), and the few in the museum. Previously, Vera passed by a class where they discussed that making things that can think for themselves is illegal. This makes things apparent that something went wrong between introducing robots to now. For Vera, it mostly comes in the form of side effects the Blue unfortunately has. She may be having hallucinations of her dead husband. 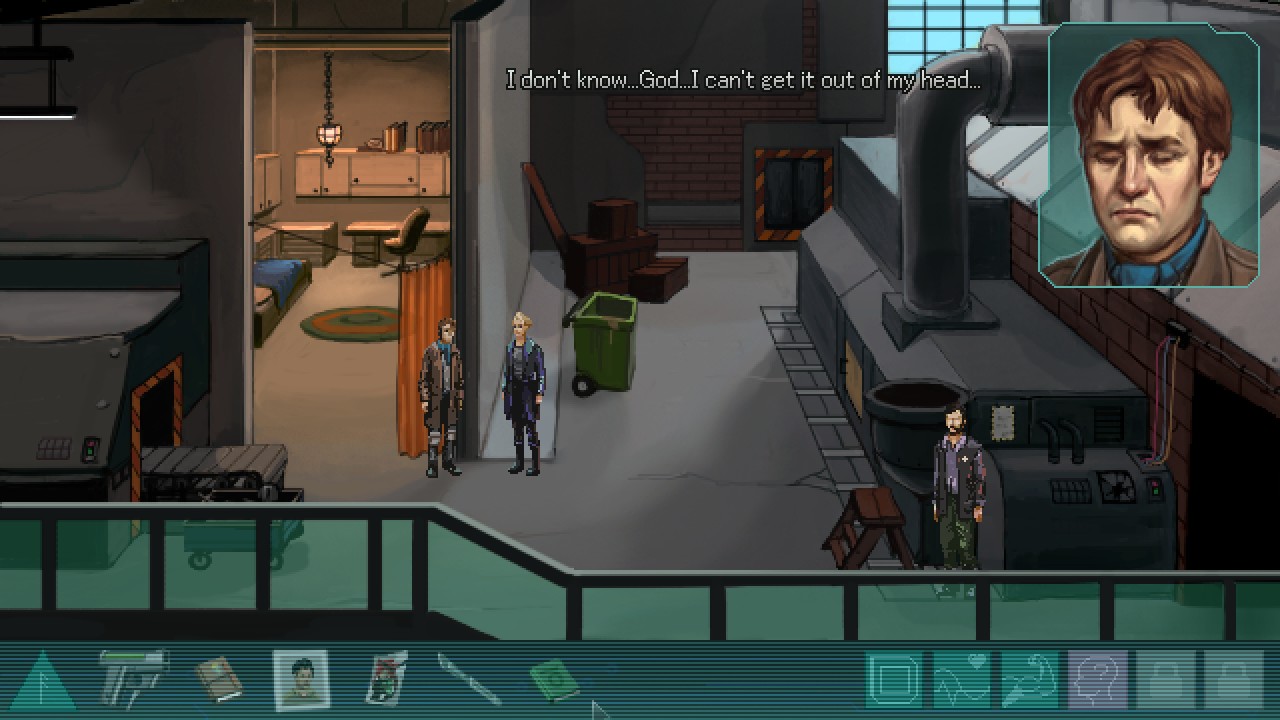 From the beginning, the choices you’ll make in Whispers of a Machine will build upon Vera’s personality which hides behind her calm facade. Mostly, this is based on your dialogue choices and somewhat on how you decide to complete some of the puzzles (the first one being the most important). You’ll advance either Vera’s empathetic, assertive, or analytical side. The added bonus that Whispers of a Machine has is that this isn’t just on the surface level. When you start the game, you’ll notice that some of the augmentations are locked away. Well, these are directly affected by which personality trait is the most dominant at the time. Be more empathetic and you’ll unlock the ability to wipe someone’s short term memory, for example. That’s not all, these augmentations directly impact how you complete upcoming puzzles. Heck, you can have two different personality augmentations and an end-game puzzle will account for that. This is great and gives players all the more reason why they should considering replaying.

On the topic of puzzles, I’d say Whispers of a Machine is just hard enough to where you won’t be breezing by, but not to the point where it just drags the story down. There are some that certainly seem to be out there, but once you get it or look it up, it makes sense. Personally, the one I got stuck on made me feel dumb for not getting it. Just, don’t rule out everything in your inventory and be sure to remember some resources Vera has access to. 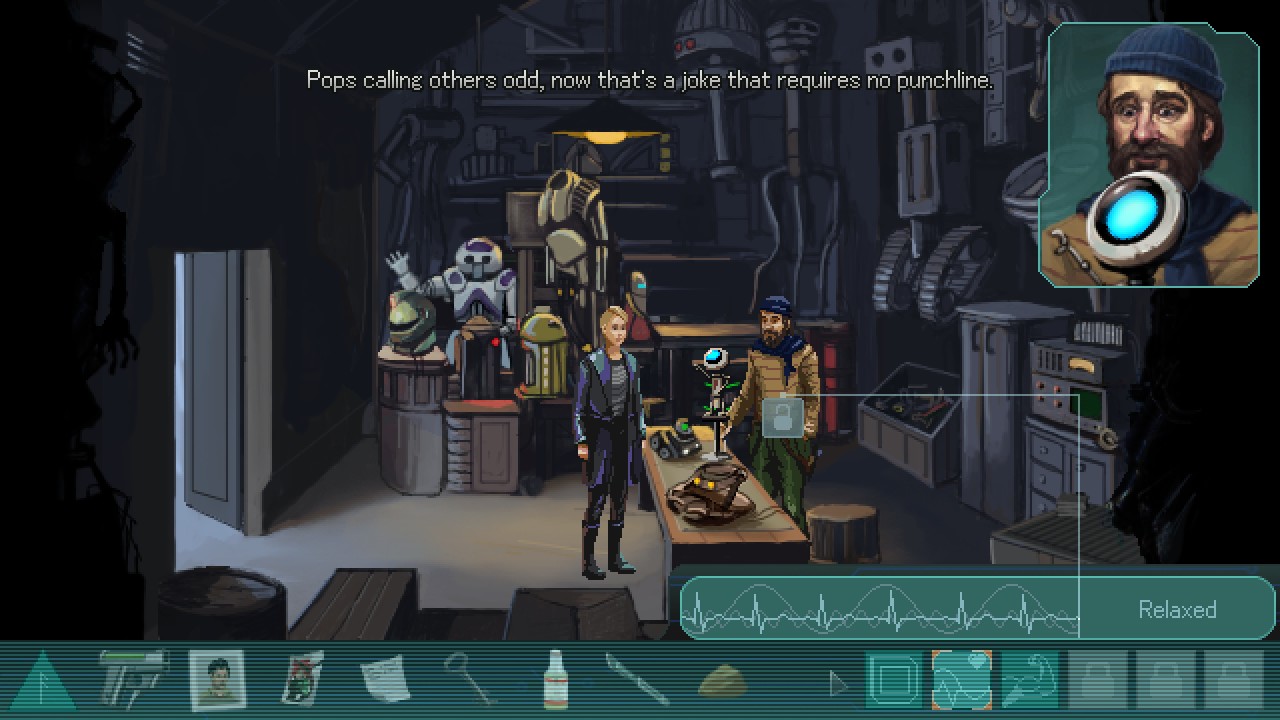 Whispers of a Machine does use an autosave feature, so the choices you make will stick with you. I’m not sure when these autosaves kick in, but it doesn’t seem too far apart (whenever I exited I wasn’t far from where I was) and even then you can save and exit sometimes. While this doesn’t bode well for those who want to replay it, at the same time you’ll probably want to begin at the start (unless you’re going for a mixed augmentation run). It helps that Whispers of a Machine isn’t a long game, so you can quickly get to the puzzles and see how each changes. 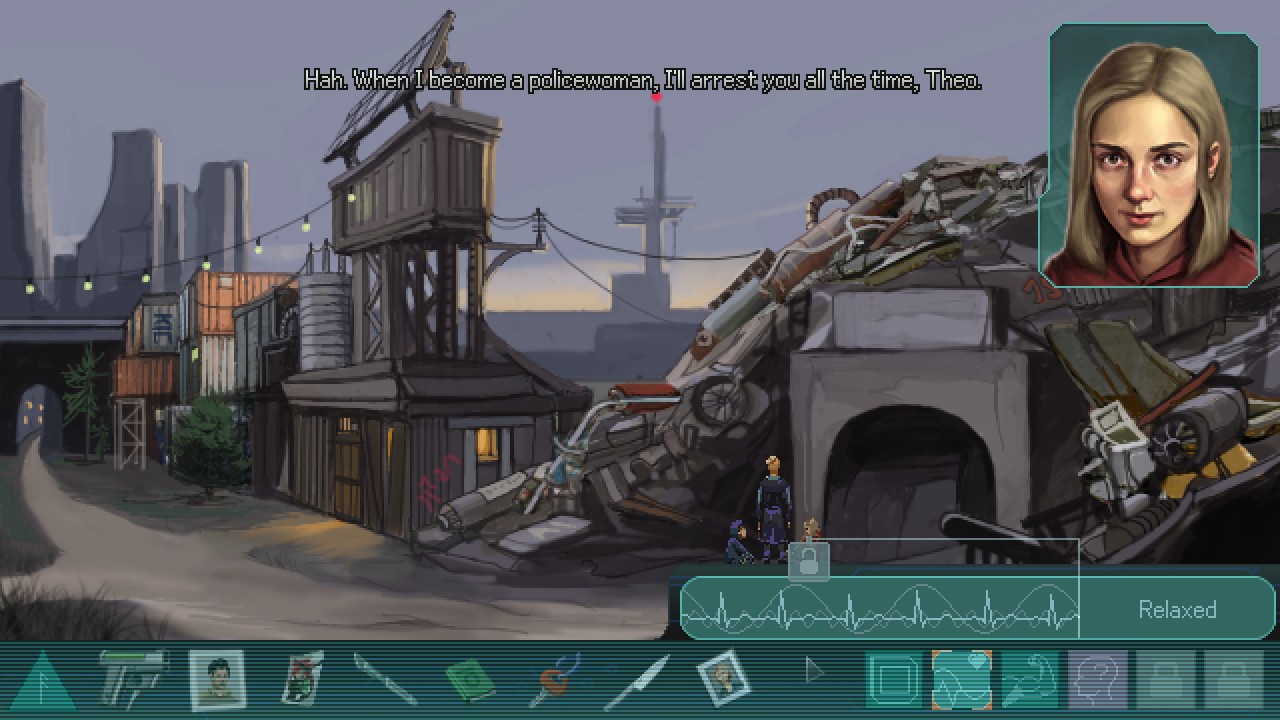 Overall, Whispers of a Machine is a good, simple point and click game that fans can sink their teeth into. The background art looks beautifully done, the characters look good in both their pixel art models and portraits (if you look closely, you’ll notice Valter controlling Nisse and moving a robot’s arm whenever you enter and exit himself), the voice acting is superb, and it really is great that most of the puzzles have multiple solutions. There is a small downside that it doesn’t go that in depth with certain story elements, though. Nonetheless, if you have the time consider picking up Whispers of a Machine.