After 7 years without a single Sudden Strike game, Sudden Strike 4 comes along and delivers a solid real-time strategy experience with a major focus on Second World War tactical combat.

Sudden Strike 4 is the latest installment in the tactical Second World War real-time strategy series. Very much like games such as Blitzkrieg 3 and the Men of War series, Sudden Strike 4 , just like its predecessors, focuses on delivering a solid calculated military experience, by focusing on the unique features of each unit, rather than base building or building up a massive army.

First of all, I must say that I have never played the otherSudden Strike 4 games, so please bear that in mind. If you were hoping to find some sort of comparison between this and the old titles, unfortunately, I won’t be able to provide that to you, at least not today. In any case, I must admit that real-time strategy is a genre which I don’t delve into really that often. I used to be a huge fan of it, during the Westwood era, but in recent years I’ve moved towards turn-based games. With that said, I guess that this is where my interests align with Sudden Strike 4 , as both it and turn-based strategy games are highly tactical.

Sudden Strike 4 is yet another game that provides its own take on the Second World War conflict. Here you’ll be playing throughout various different scenarios from all across the Great War, from the initial German invasions of Poland, France, and the Soviet Union, to the counter-offensives against Germans, and the eventual downfall of Berlin. 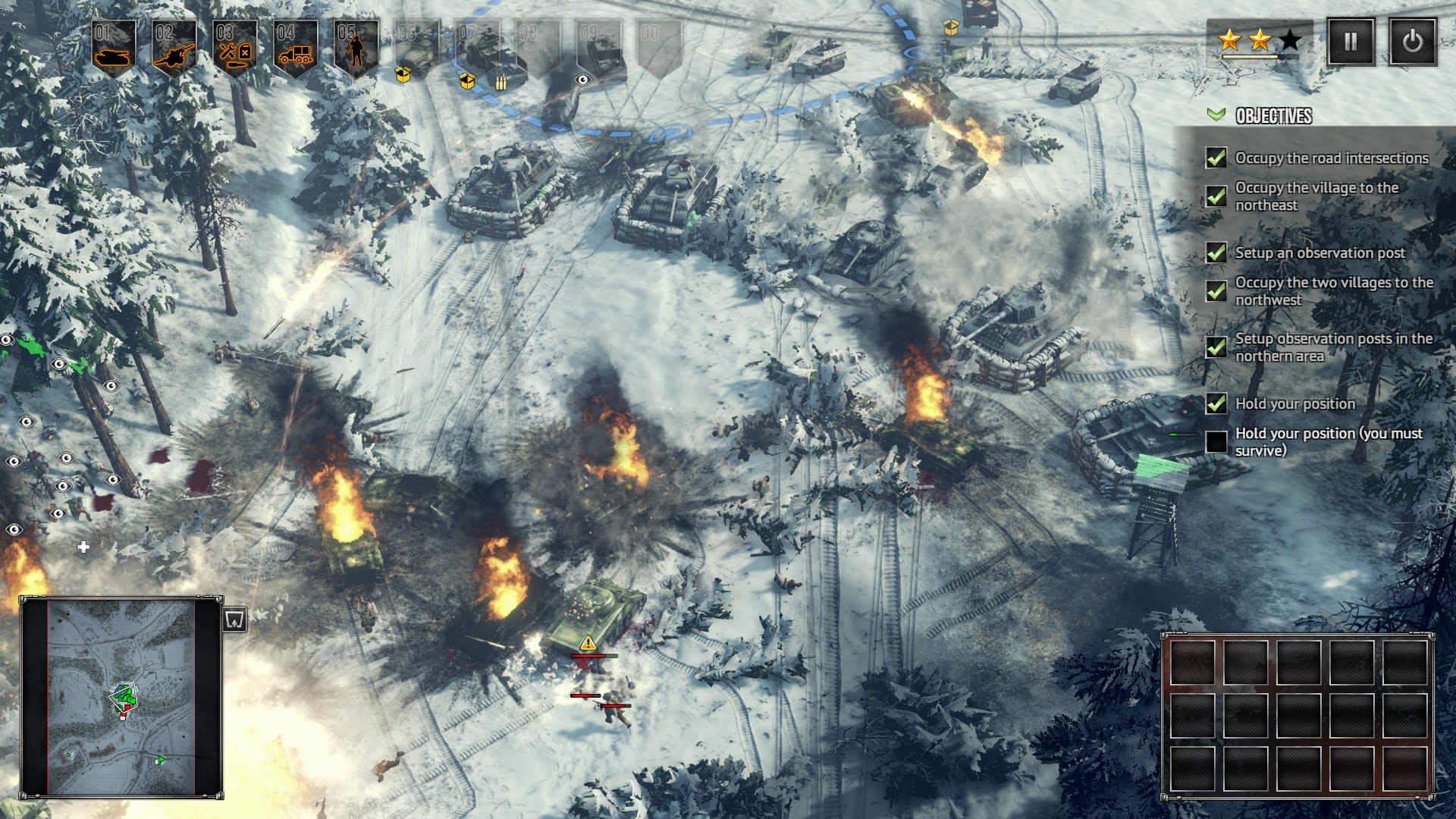 World War history is something that you either find boring or very interesting, and having found myself in the latter group, I was surprised to see that the game provides a surprising amount of historical background for each of the missions. While the narrative is clearly not the focus of Sudden Strike 4 , there are a few elements of storytelling between missions. From short briefing sessions, and recounts of the events that led to the battles that you’re about to take part in, to your general’s journal notes at the end of each skirmish, there is a remarkable amount of effort put into providing a solid historical background for those that might not be familiar with the peculiarities of each conflict, as well as those that are into the history of the Second World War.

The base game comes with three different campaigns (German, Soviet, and Allied), which you can play in any order you like, but it also offers online PvP, AI skirmishes, as well as Steam Workshop support, which lets you play player made missions. Aside from the actual battles in which you play on each of the campaigns, there isn’t really much variety in terms of new things to experience throughout the game. However, the tactical element plays very well in conjunction with the different map layouts.

Given the tactical nature of combat in Sudden Strike 4, you’re not going to succeed if all you do is throw your units at the enemy. Careful planning and using the terrain to your advantage might just be what you need in order to turn the tide of a battle where you’re severely outnumbered. For instance, units in vegetation are harder to detect, which makes infantry ideal for revealing the fog of war and scouting targets for your artillery. Most often than not, this creates the perfect opportunity for the player to overcome enemy numbers and strength. Sneak up your infantry around the enemy, with some anti-tank capabilities or mortars, and then make rain fire on your enemies from the safety of the woods. Meanwhile, once any potential anti-armor guns have been dealt with, use the brute force of your armored division and sweep in from the order side in order to deliver the killing blow. MLG strats. 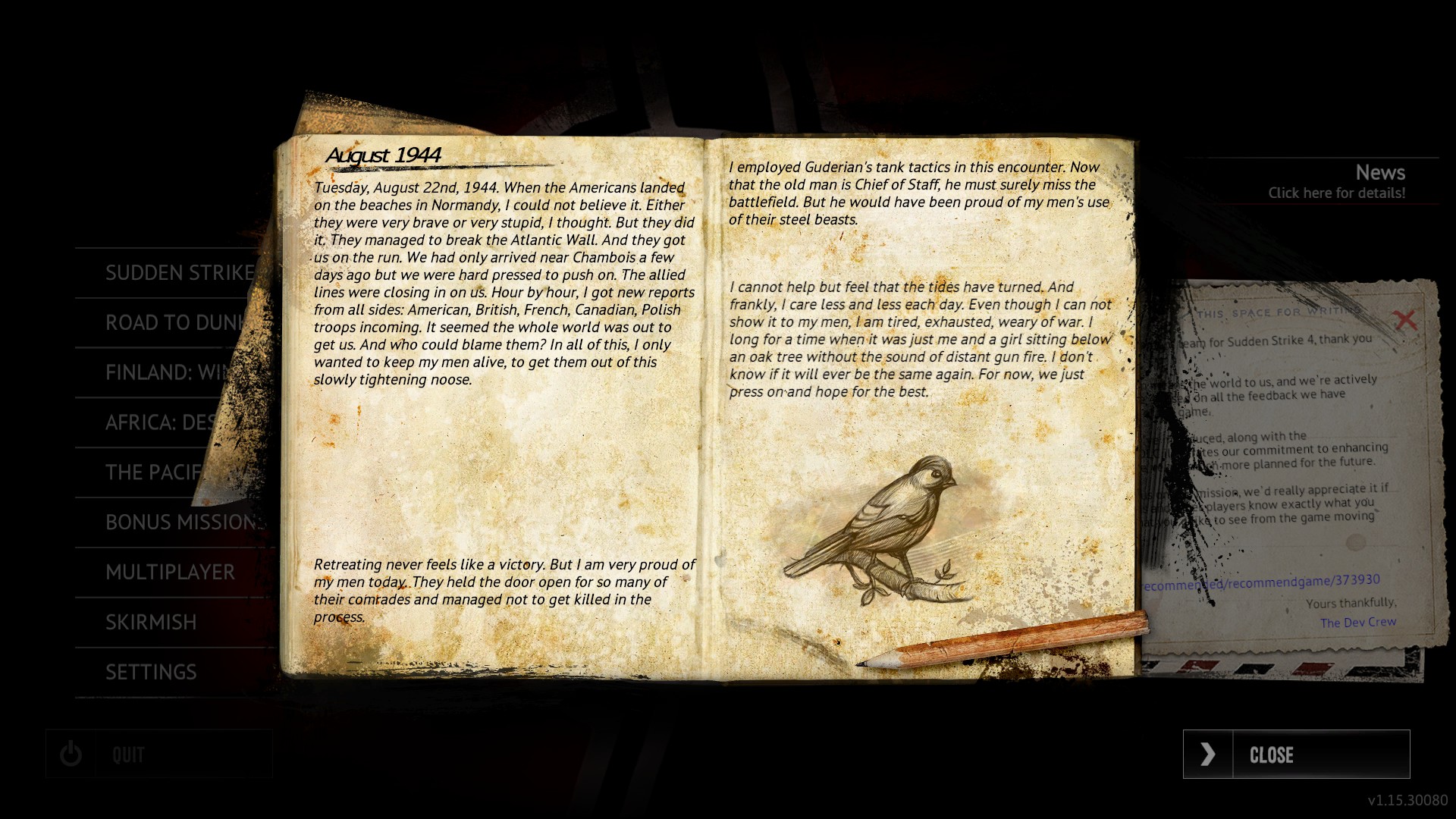 The game is not all about shooting things though, as there is quite a fair bit of logistics involved as well. Apart from your standard infantry, anything that fires actual explosive rounds uses ammunition, and all vehicles require fuel in order to keep the engine running. This is where repair and supply trucks, and supply depots, come in. These fragile fellas are your best friends in times of need, as they’ll make sure that your artillery can keep firing without running out of ammunition, keep your vehicles repaired and ready to go, and keep the juice flowing through your tanks so that they can keep on crushing. Trust me, the last thing you want is to have one of your tanks caught with their back facing the enemy, as this is pretty much all tanks weak spot, because they ran out of fuel or got their tracks damaged.

One of the things that makes combat so special is that there is no ultimate unit and that every single unit counts. Each unit, no matter if it’s a rifleman or a medic, a tank or an armored personnel carrier, serves its own purpose, and, depending on the situation, the combined use of these can create the ultimate battle plan to deal with the enemy. Furthermore, you can also use infantry to barricade inside buildings and to take control of vehicles that you might find in the battlefield, and you can also tow anti-tank guns in order to execute more elaborate attacks. Now, combine all this with air support, and you have the ingredients to crush any opposing force. 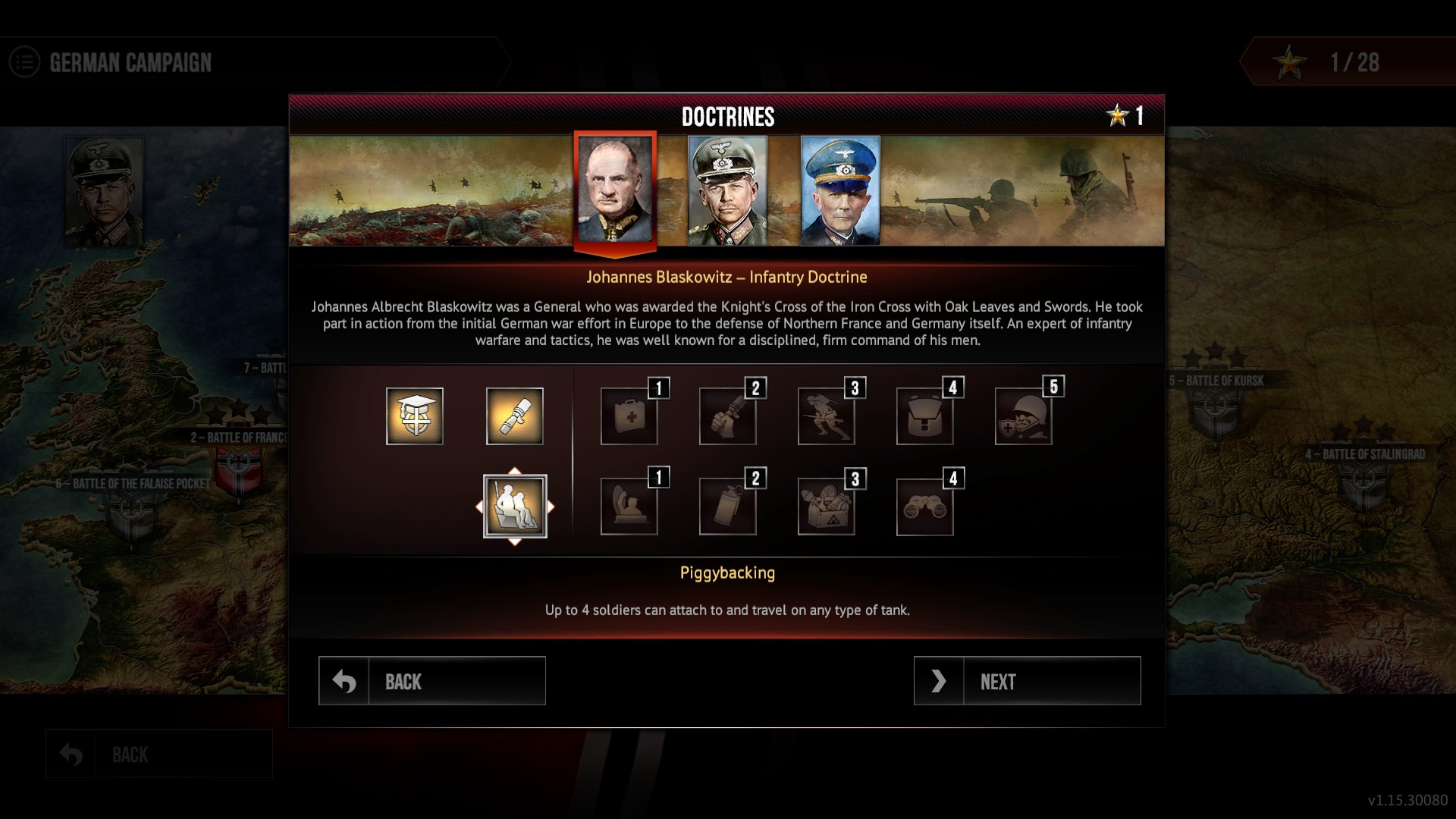 Sudden Strike 4 also lets you pick one out of 3 military doctrines before you start each mission. Depending on your performance on each mission, you’ll be awarded stars, which you can use to unlock new skills for each of your generals. Each general has their own strengths and weaknesses, but they do share some common traits. While one might reinforce your armored divisions, another will grant you infantry bonuses. It’s nice that the game gives the player some leeway so that they can choose whatever suits their playstyle. Sometimes, if you get stuck on a mission, switching between these can actually prove useful, as you always have a fixed amount of units on each mission. You can’t summon new ones, sometimes, in some missions, you will receive reinforcements, but that is about it. There is little room for sacrificing units and supplies.

While Sudden Strike 4 mechanics are what makes it a truly enjoyable game to play, there are some things that could use some tuning. The most apparent one is clearly the weak sound effects. For a game where you spend a lot of your time hearing machine gun fire and explosions going off, I would’ve liked to see the audio get some better treatment. On a different note, there’s one small inconvenience which I tend to be quite critical in games whose missions can take up to an hour to complete, and that is the lack of an auto-save feature. If you carried on during a mission and forgot to save, you risk having to restart the level in case you end up failing an objective. Likewise, you might also get unlucky if the game decides to crash on you for no apparent reason like I’ve experienced a couple of times. 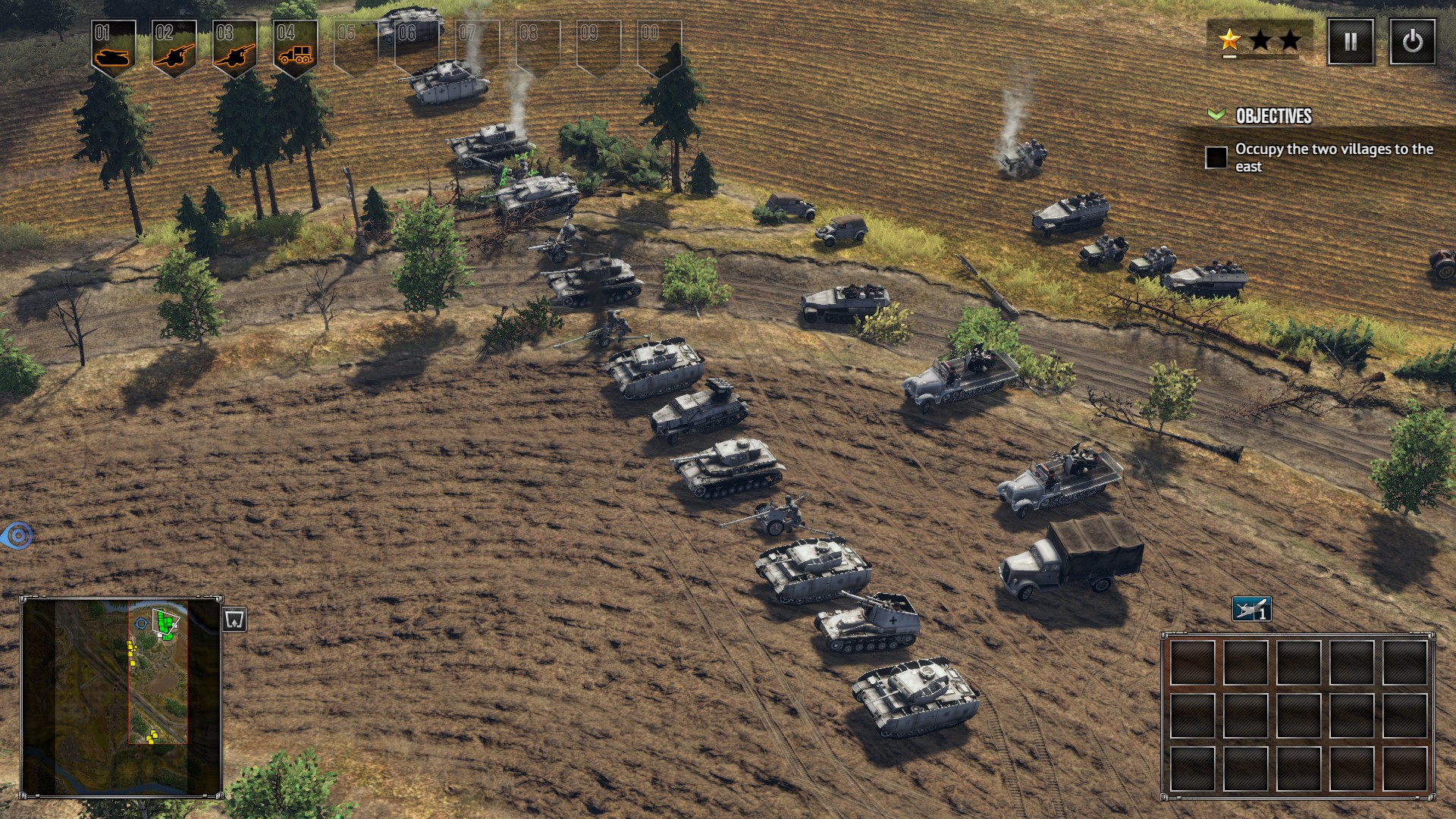 In today’s day and age, there are very few real-time strategy games coming out, and even fewer ones that focus on tactical combat and that don’t feature any sort of base building. In this context, Sudden Strike 4 does a good job in standing out on its own, and even though it will turn 2 in a few months, it’s still a game worth picking up if you’re a fan of Second World War strategy games. Despite its robustness, I wouldn’t really recommend getting this game at full price, even though it offers dozens of content. Given that there are currently 4 paid DLCs that add their own campaigns to the roster, I’d personally just wait for a sale and get the whole package.