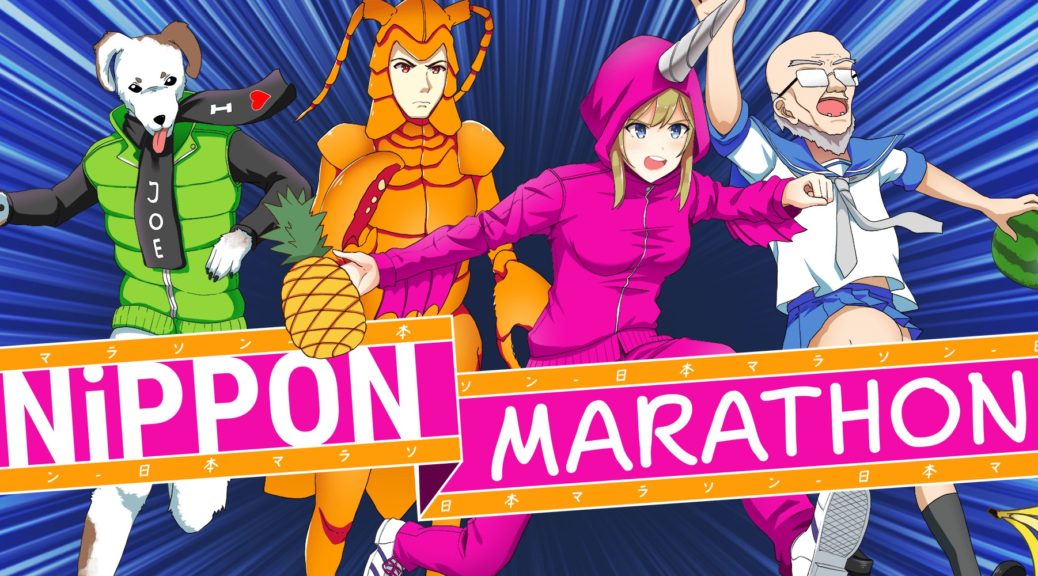 Your group of friends will love it

I set up my laptop in the living room and handed out controllers to my friends. “OK, what do you want to play today?” I asked. “Nippoooon Marathooooon!” replied one of them. “Yes, Nippon Marathon!” shouted another. I own probably a hundred party games. The simple fact that my group picked this one among all the contenders in my collection is ample praise: this game has staying power. Let’s see why you should also add this game to your collection!

Nippon Marathon is a racing game, of some sort. The contestants are not on karts or bikes, they are simply running, but there are still a few items in the vein of Mario Kart, such as a banana or a heat-seeking watermelon. The appeal of the game is that it’s presented as a Japanese TV program like Takeshi’s Castle, effectively becoming a dangerous obstacle course oozing with the archipelago’s famous brand of insanity. As catchy Jpop plays, a monkey taking a selfie will appear in the corner of the screen while contestants dodge Shiba Inu dogs and a commentator adds funny remarks in broken English: the events taking place are completely bonkers, and it’s a joy to participate in such a funny race. 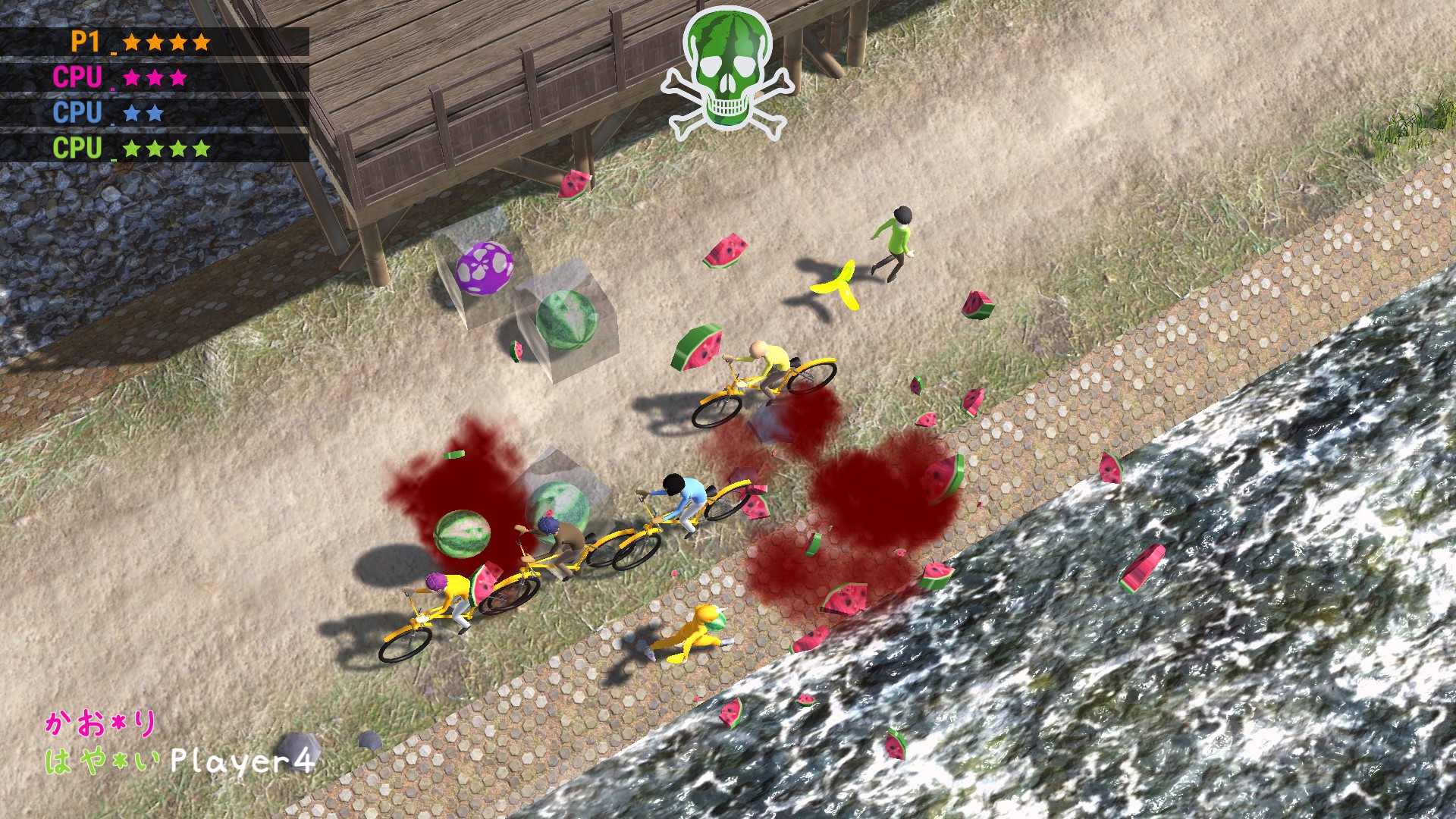 Each level is unique and interesting, from a race atop a bullet train to a stroll through a sake factory. Those who lag behind or fall to their doom get temporarily eliminated until only one remains, then everyone respawns in a line and the race can continue. These events earn or lose stars, which contribute to the tally of points determining the final winner of a race. Another variable contributing to one’s total points is popularity, which is gained by accomplishing specific actions such as using items or kicking businessmen, but don’t pick up mushrooms or hit fans or you will lose points. Sometimes, a mini-game randomly pops up, it can be either a special maze level or a series of words to assemble in a sentence that makes a modicum of sense. The results can sometimes be hilarious. 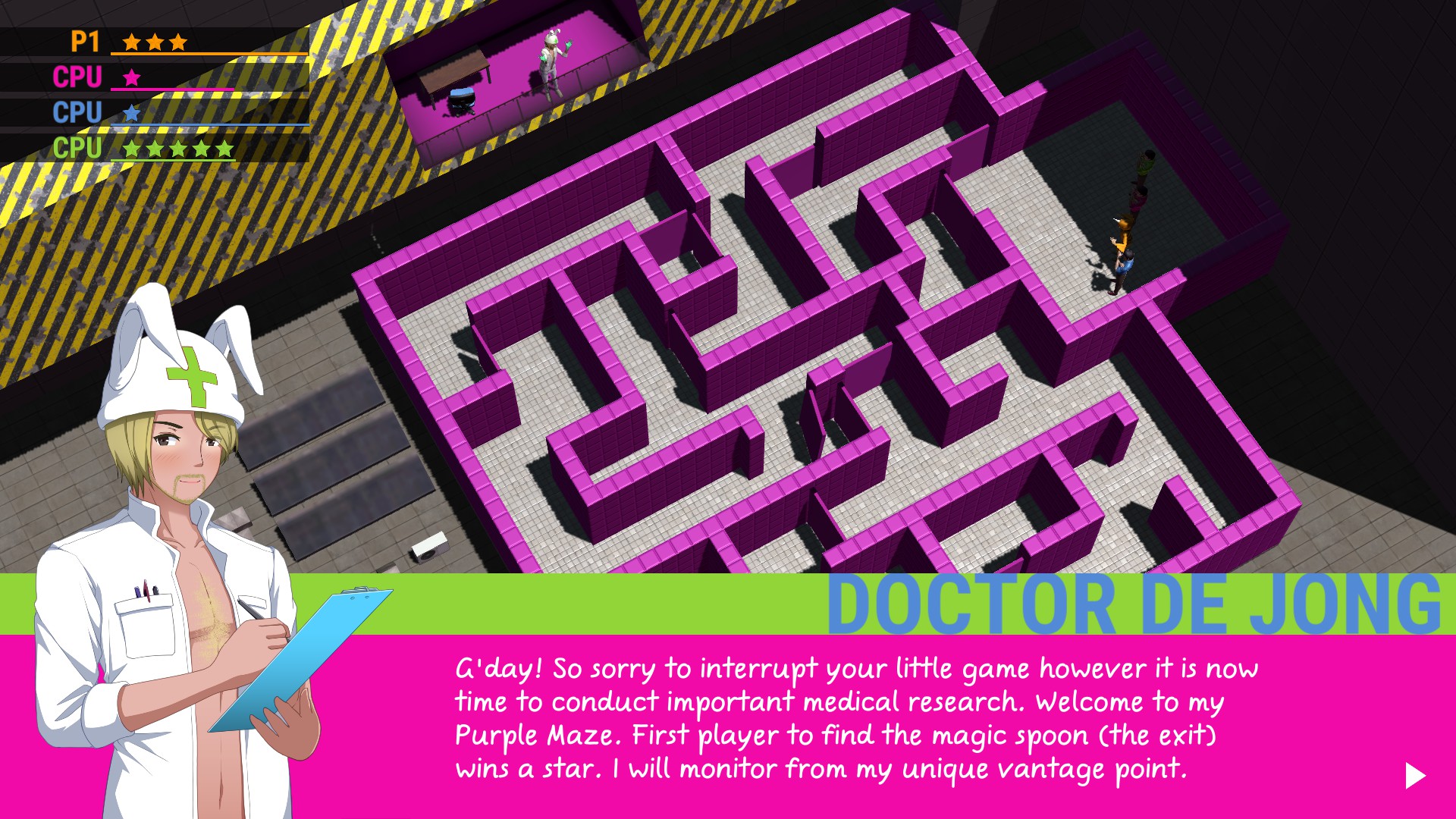 The graphics contribute to the weirdness, a mix of flashy colors and characters with hyper-realistic background textures. As cyclists get in the way, earthquakes cause items to fall on the contestants’ heads, cars run over players and dogs chase racers around, the first impression that the game gave us was pure unaltered chaos. The strange physics and character animations (pedestrians fall in a secure yet hilarious embryonic position) cement the feeling that this game does not take itself seriously, which will allow us to forgive the occasional bug—it’s sometimes broken: AIs can get stuck, choosing an alternate path can be seen as leaving the fixed screen and losing, making a character that glitched out the winner. In any case, it’s so colorful and energetic that it’s hard not to have fun and enjoy the moment. 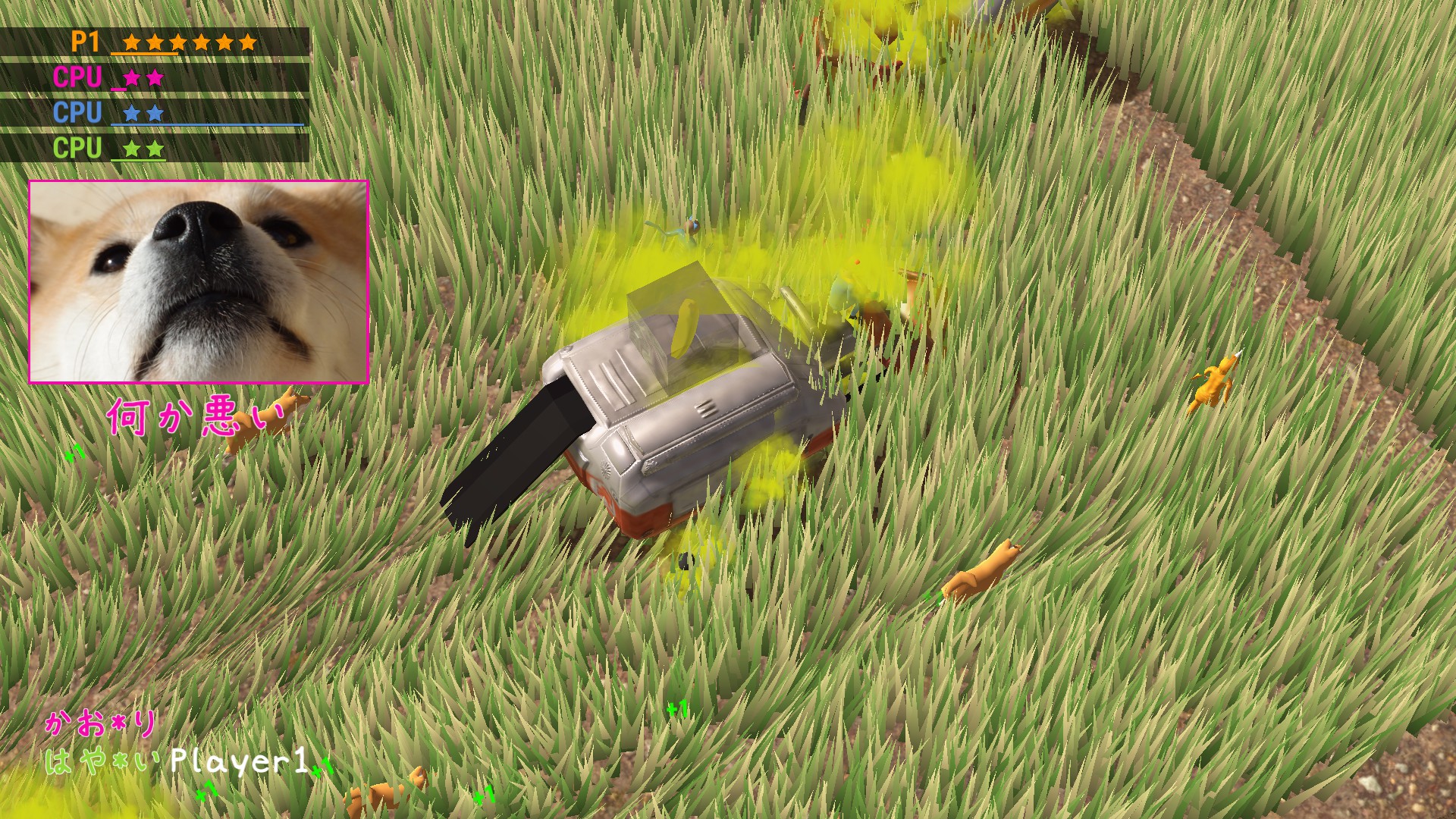 It’s possible to change the controls, but the default controller layout is good: A to jump, X to dive (when there is a large gap to get across), B to crouch (to avoid some obstacles), Left bumper for an item in the left hand, Right bumper for an item in the right hand (press to use, hold to eat and gain a speed boost); it’s very quick to understand and master. There is so much going on that even losers have some fun goofing around, and the game often puts everyone back together. It’s not a super technical game where you will get better the more you play it, it’s just a super fun title that you launch at a party, and quickly everyone laughs. 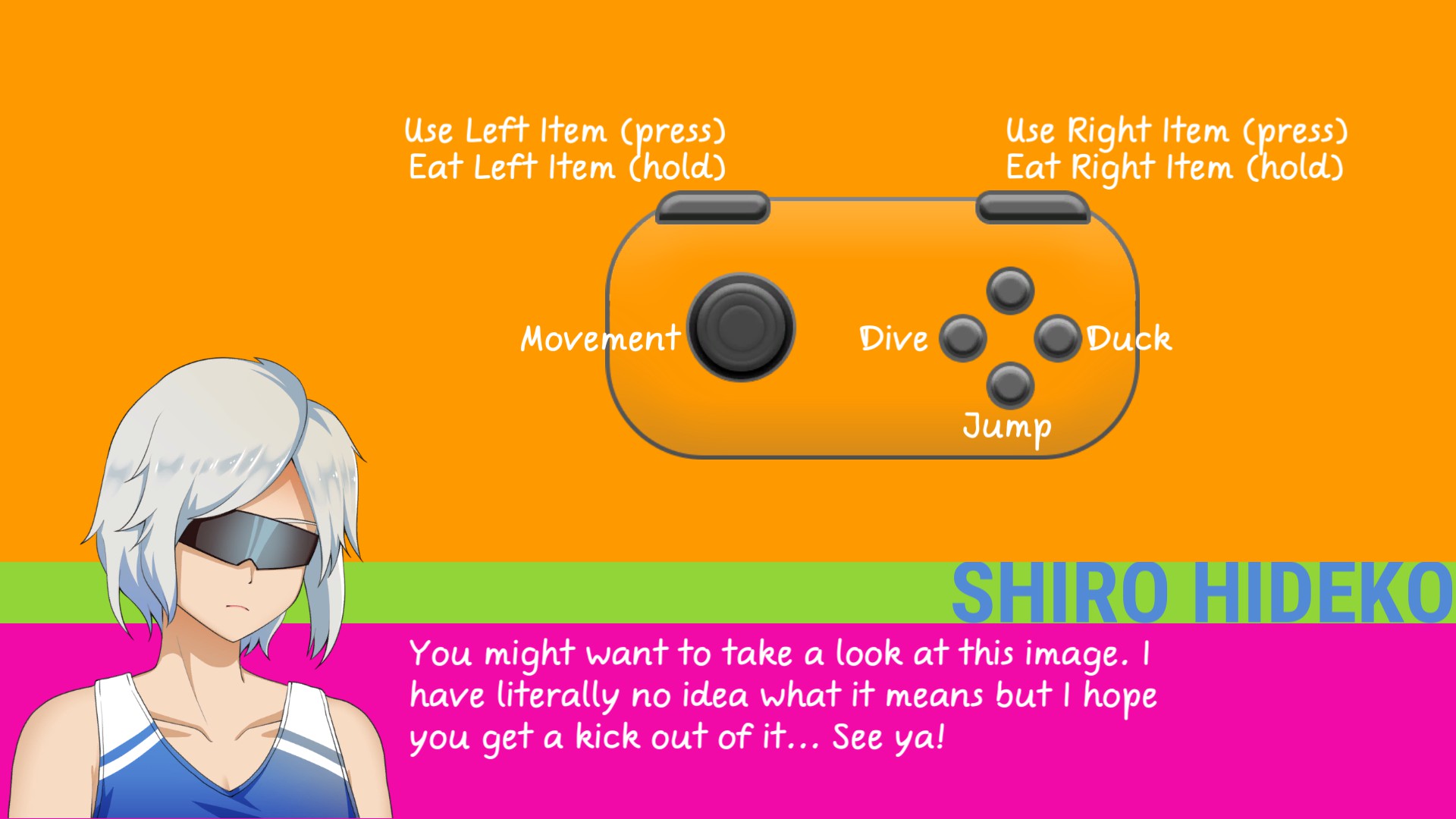 The game released in Japanese and I had to blindly find English in the options menu (gear at the bottom), but I don’t hold it against the game. There is a shop to buy new contestants with in-game money, and also additional options such as a turbo mode (the game plays much faster) and the possibility to customize items. It’s possible to pick from one of the 8 races or play a bunch together in a marathon, but there is also a Lobster mode that procedurally generates an obstacle course, brilliant (it’s also a hot seat, the controller is passed from one player to the next). The only sore point is that there is no online mode. Finally, there is a single-player campaign. 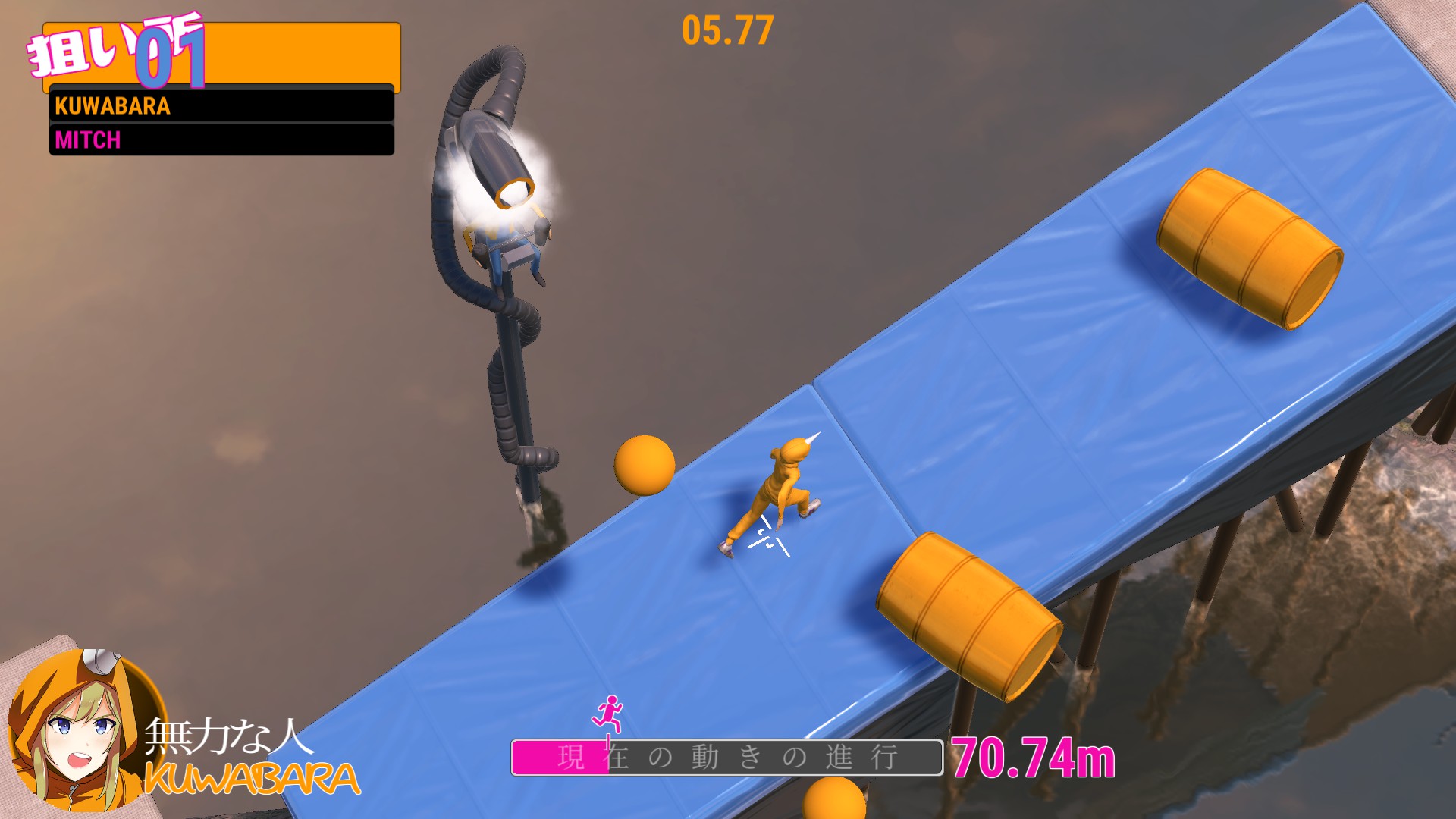 Surprisingly, there is a story mode with a bunch of cut-scenes. It’s roughly the same story for the four characters to choose from, but told from a different angle. The dialogue is surreal and the plot is completely silly, but that’s why we like this game after all! The campaign takes approximately two hours to finish, and it’s not very difficult except if a glitch forces you to restart a race. For completionists, there are hidden pages in the game that lets you complete a travel guide with funny stories and tips to boost your popularity score. 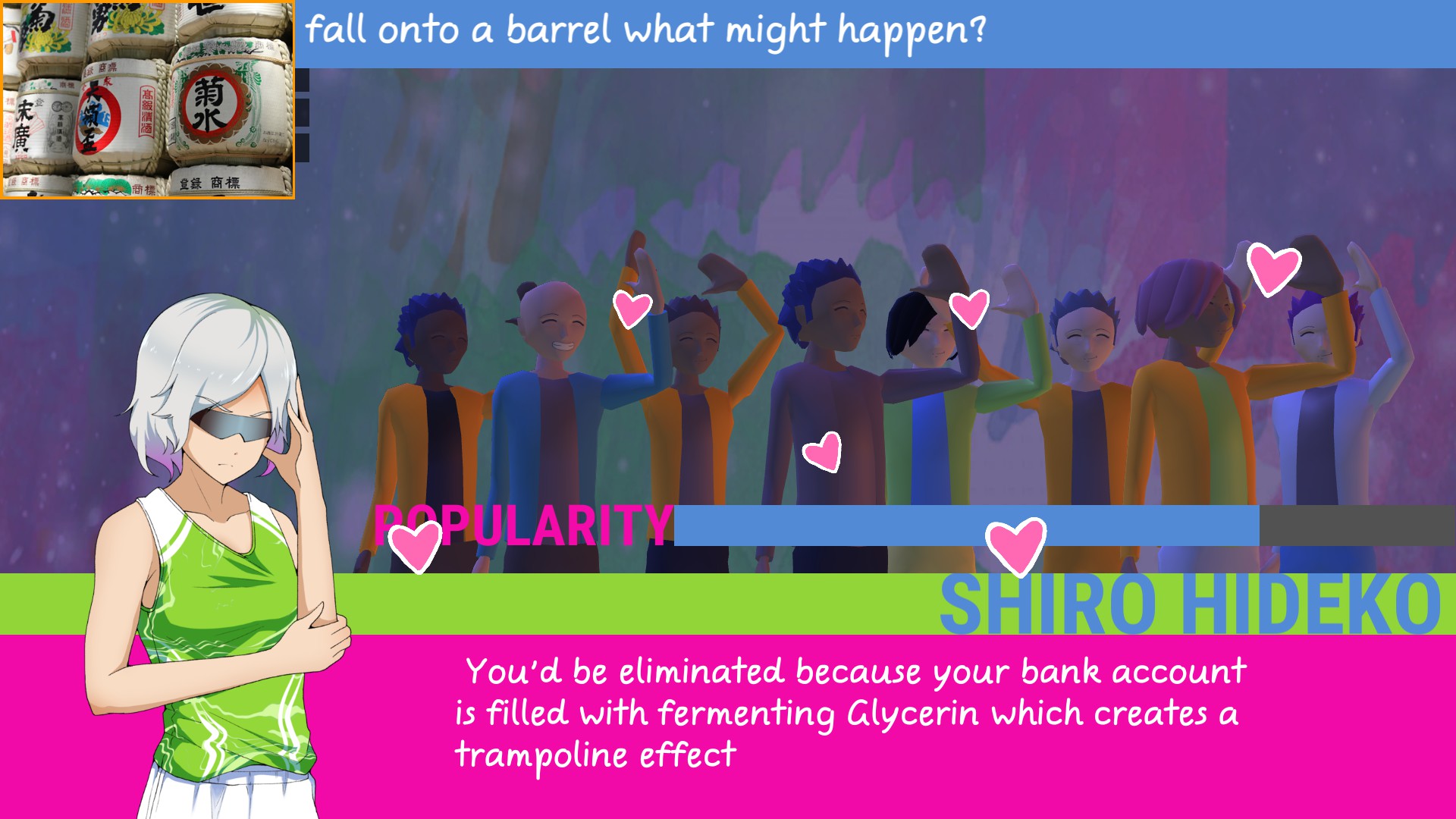 Nippon Marathon wears its (broken) heart on its sleeve. Don’t start the race expecting something deep requiring intense skill, what you can expect is a solid amount of content that will have you and your friends laughing to tears. It’s a blast, a definitive must-have in your party games toolset: unabashed fun and silliness galore. The only downside is the lack of an online mode.