Zombies have risen. They are thirsty for blood, hungry for brains. Logically, their first step is to… challenge surfers to a dodgeball game on floating logs! And wouldn’t it be more fun if the ball was a hatchet?

Log Jammers is a game in the vein of the old arcade game Windjammers. It’s also a 1 versus 1 fast-paced game about getting a projectile past your opponent… but you might have to kill the cheerleaders first in the titular game mode variant, as they block the path of the hatchet. That is until they are split in two and disappear to the bottom of the pool. 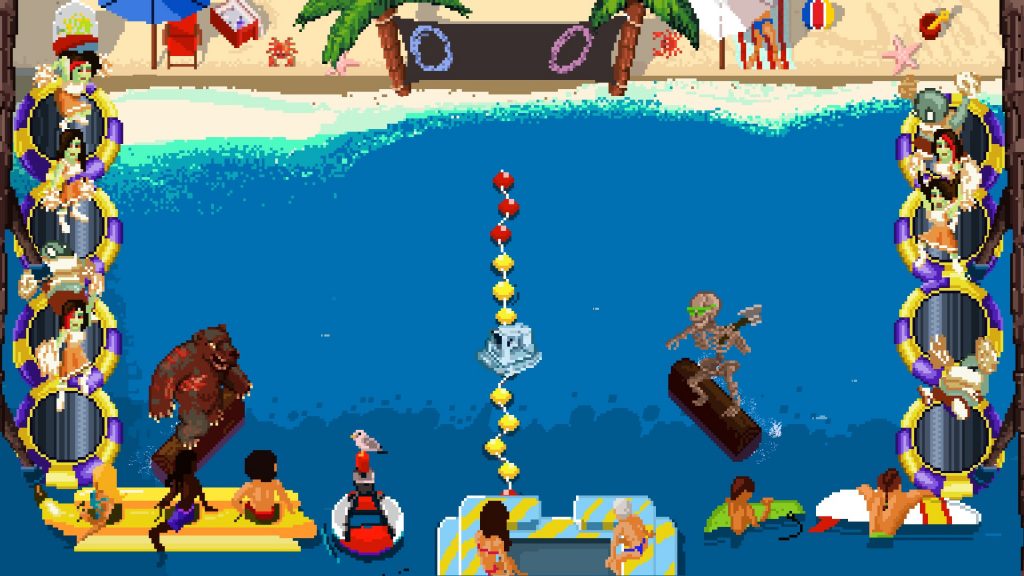 Quick play allows to play against a local human adversary, but there is also an online mode if you plan on buying the game with a friend. Finally, there is also a single-player tournament in which you have to defeat all characters in a row. Pretty much everything that you might need is covered! 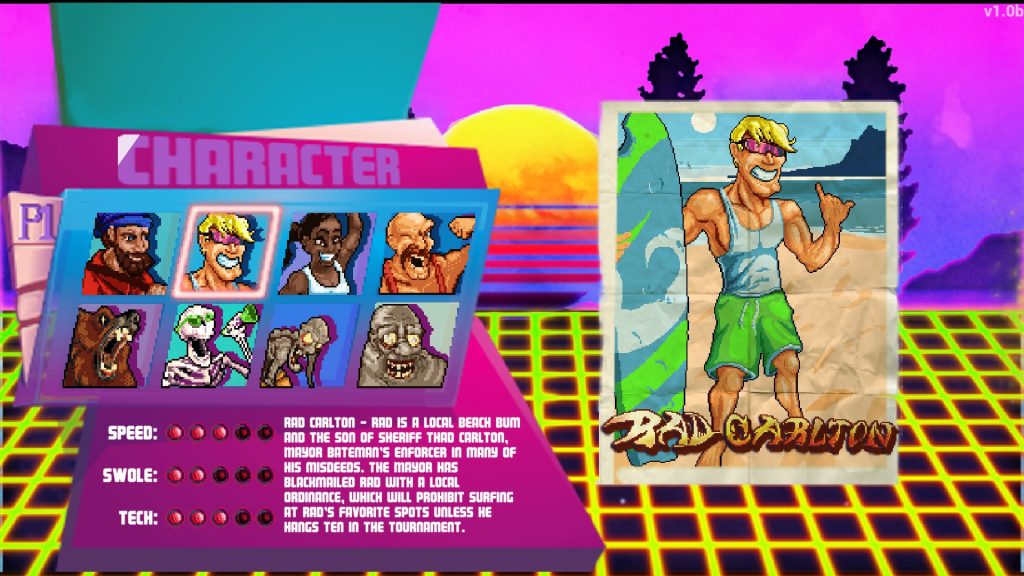 The gameplay itself is not too difficult, but a tutorial to explain the finer details is so far missing. There is a dash, but also a special attack that I never figured out (perhaps it’s not implemented in the game yet). Something that it took me a long time to realize is that when an enemy throws the hatchet in your direction, there is a small window of time for a reactive counter that instantly hits back a super-quick cannonball. Finally, there are power-ups that appear in the center and offer the choice whether to grab them and risk being temporarily out of position. Their effects are not intuitively communicated to the players and most power-ups remains a mystery for a while. 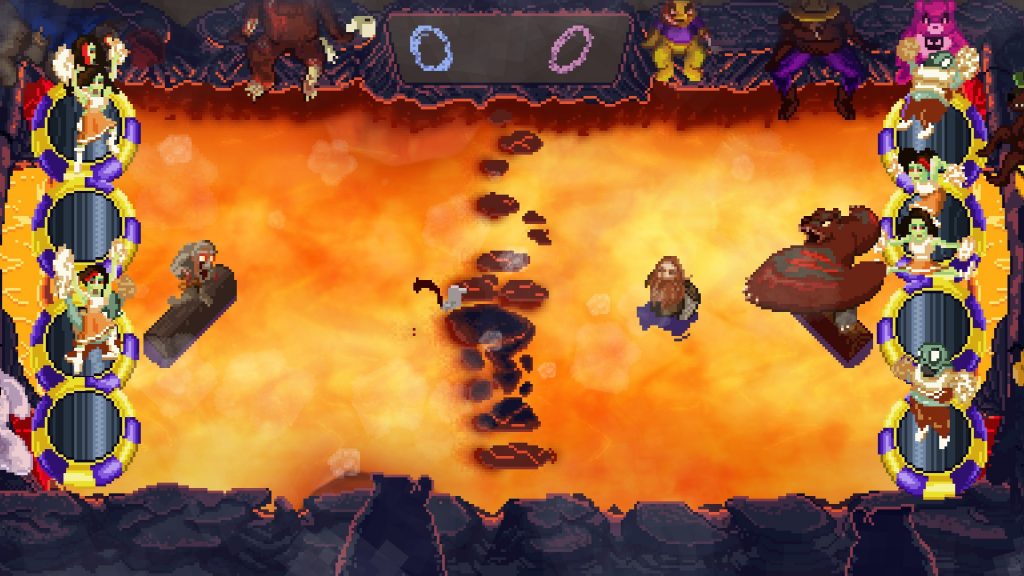 Each battle is fast-paced while involving a little bit of mind game to lure your adversary somewhere while you shoot the opposite direction. The characters (each with their own stats for speed, swole and tech) hurl hatchets at each other and automatically catch them until someone manages to get past the defenses and hit the back of the level. Then according to the location (center or edges), a score is given, and the first player to get past 10 wins the round. 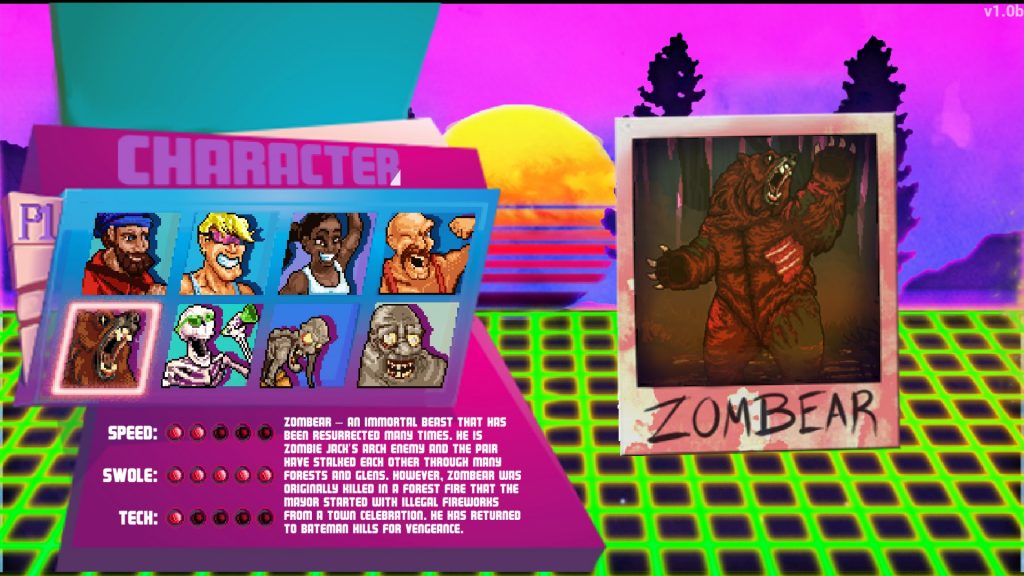 Not much to do

While there are many different maps, beyond their looks they play exactly the same. Truth be told, there isn’t all that much to do and the game quickly feels boring and repetitive. The area of play is just too limited as each player is constricted to a small vertical band, and while it’s fun to play cat and mouse with your opponent for a few rounds, the game does not lend itself well to prolonged sessions. Ultra Space Battle Brawl that I tried at the same time and within a similar genre offers much more depth and provides more interest over time. 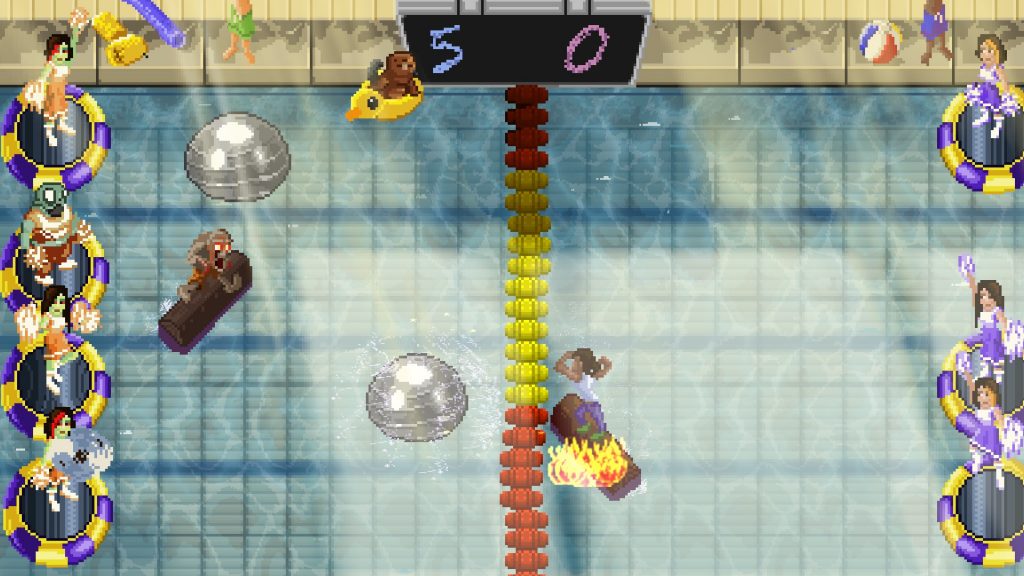 Log Jammers looks great and features both single-player and the complete multi-player package, but despite all of its good intentions it quickly feels too repetitive. With all the other amazing party games on offer, I am afraid that we did not wish to stay long with Log Jammers. I don’t fault the game for its (good) execution, but for its concept.