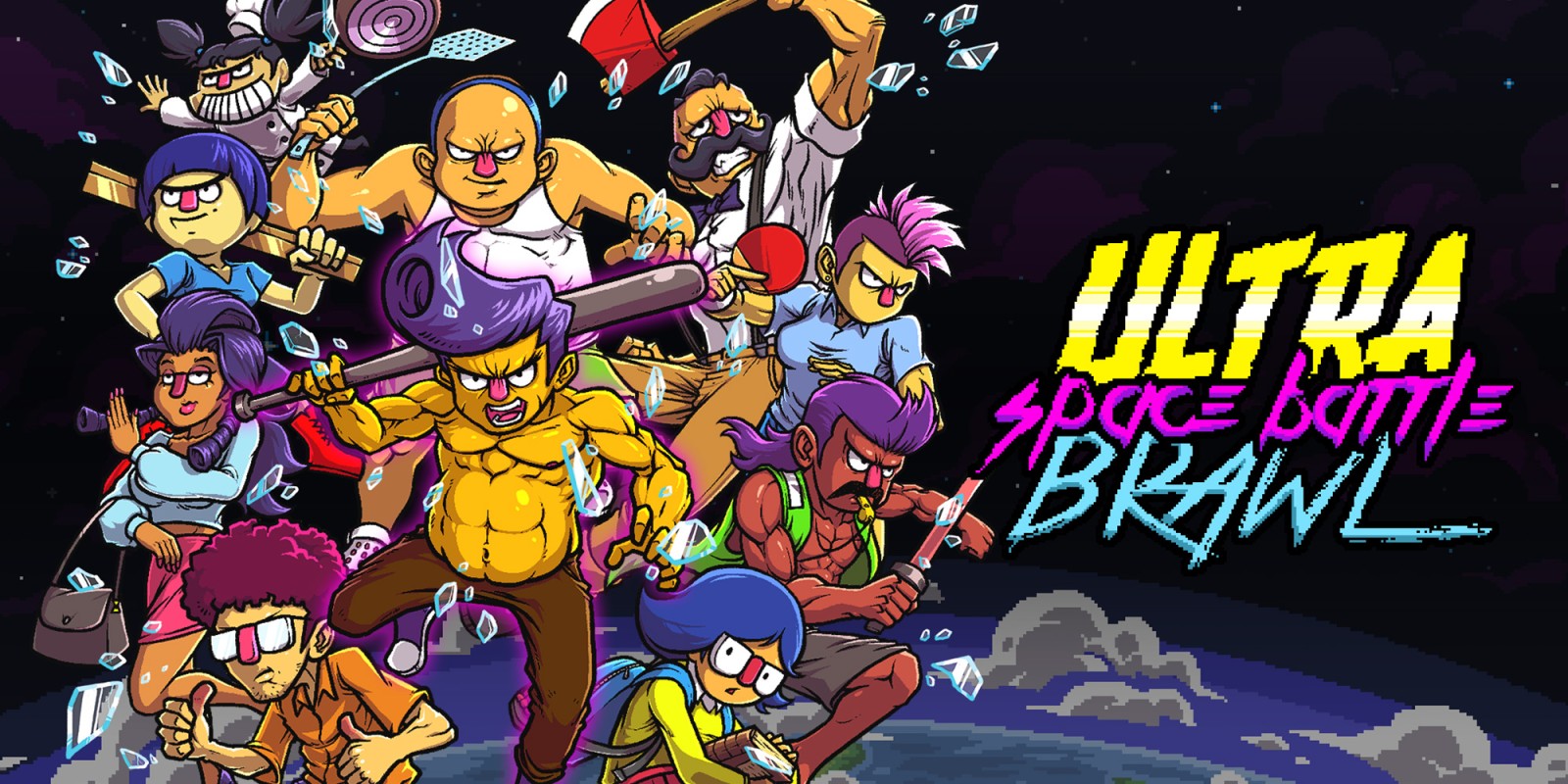 There is a tournament raging across the solar system. The skies of Neptune are ablaze with energy bats discharging the full power of an ultra swing. Another battle has started, and it won’t be pretty as the opponents won’t hesitate to resort to the dirty tactics they’ve been honing for years.

Ultra Space Battle Brawl is a local multi-player game (no online) for up to four players that takes ideas from Pong, Lethal League, and Breakout. Each fighter had a crystal to defend, and that crystal is initially protected by a circle of little heads. We liked to call them the little Trumps because some do look eerily similar. There is a ball in play, and each player has a character which is able to hit the ball and impact its direction to go for a direct hit or to rebound on the edges of the screen. It takes a few hits to clear off the little Trumps and leave the crystal vulnerable, which means that the battles are not resolved instantly and require sustained attacks to prevail. 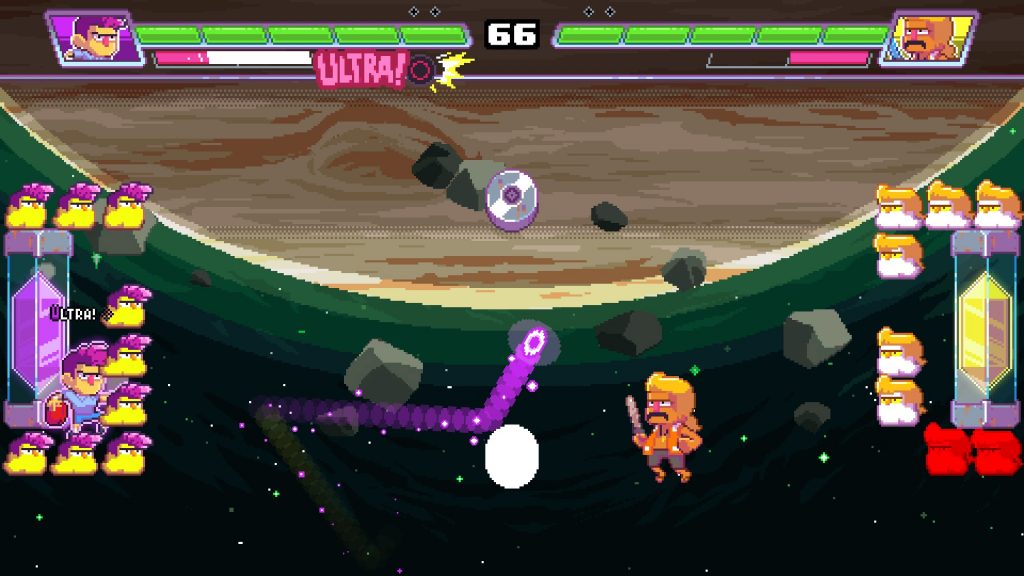 This is actually good because the game mechanics give ample room for skill and mastery to shine. Besides the directional smash, there is a dash and also specific power to each character. These ultras range from invisible balls to black holes and swarms of flies. A lot of map control is involved in the strategy. Will you stay back to defend more effectively, or push on and get so close to the enemy crystal that you can hit it multiple times in a row, but open your side for a devastating counter-attack? Furthermore, once a ball has been hit by a team, it takes that team’s color and does not damage their own defenses, which brilliantly gives the aforementioned possibility to focus on attack and control rather than just reacting to all incoming balls without a strategy. 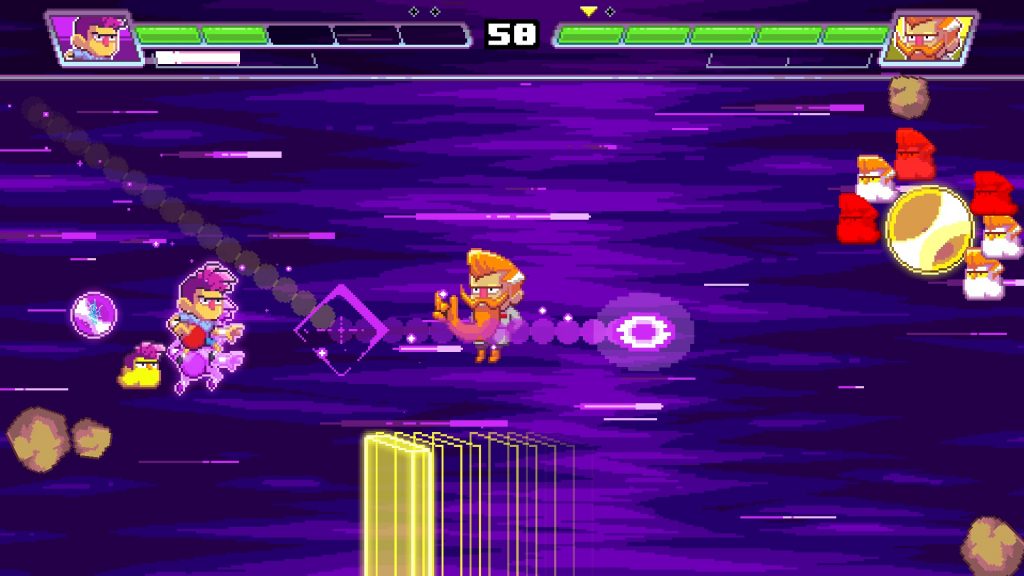 A lot of variety

There are 10 characters and 5 maps, each map proposing a different layout for the defense and sometimes adding obstacles that can help temporarily trap the ball on one side. Since there is so much to do, if you enjoy the concept you won’t be bored within a few minutes. 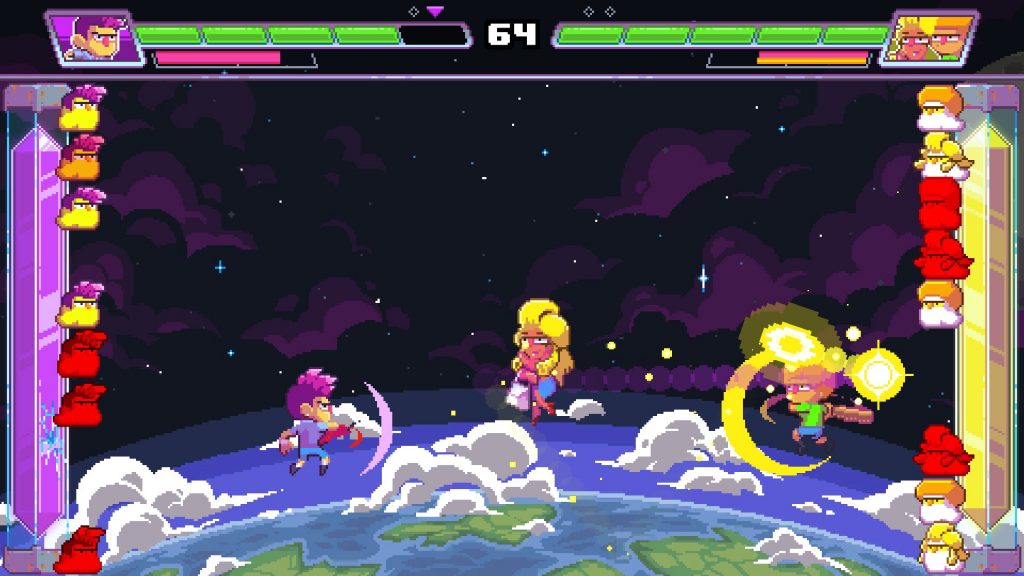 Conversely, when I played with my friends they quickly asked me to switch games. They clearly did not enjoy Ultra Space Battle Brawl, and I guess that’s because it’s more or less a sports Pong/Breakout kind of game than a battle game like Lethal League/Wand Wars. With four players on the screen, it was a bit chaotic and confusing, and my friends were more interested in resuming our Catastronauts campaign than taking the time to learn Ultra Space Battle Brawl. This is a shame as it is the main reason why I did not give this game a higher rating despite its qualities, it simply did not federate players during a party. 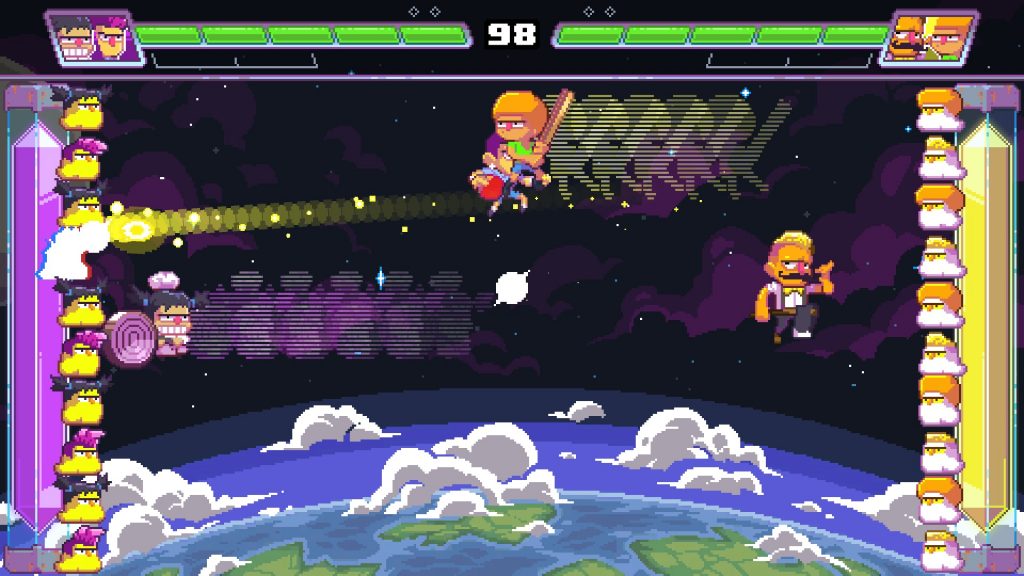 Even though I was overthrown by the dictatorship of democracy, I was still able to spend time with the game as it features bots and a single-player campaign tasking the player to beat all opponents during a tournament. Normal mode has infinite continues while the hard mode doesn’t, thus the difficulty settings can satisfy everyone. I had fun playing solo and mastering the gameplay while learning the colorful background of the playable characters. 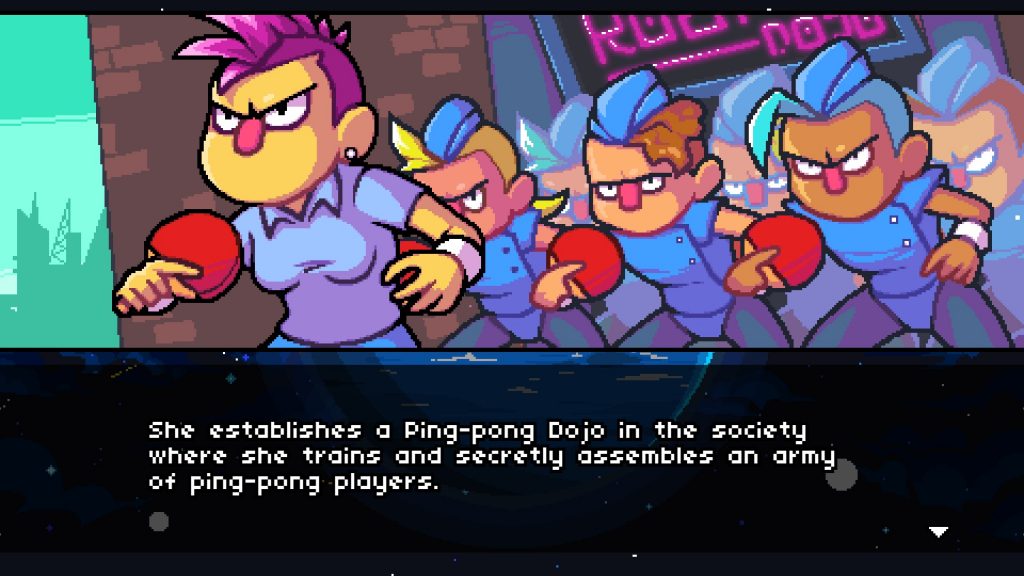 The style is very 80’s cartoonish pixel art, with an exotic layer sprinkled on top as the developers are from Indonesia. Animations are smooth, the music is great, and sound effects are excellent. This really feels like a polished game. The controls are quick, both normal buttons and shoulder buttons can be used. It’s just a shame that it’s not possible to rebind them. My only issue is that the Playstation controller buttons were displayed on the screen even after the aforementioned controller was unplugged and I was using an Xbox type of controller, making the button prompts a bit confusing during the first minutes. 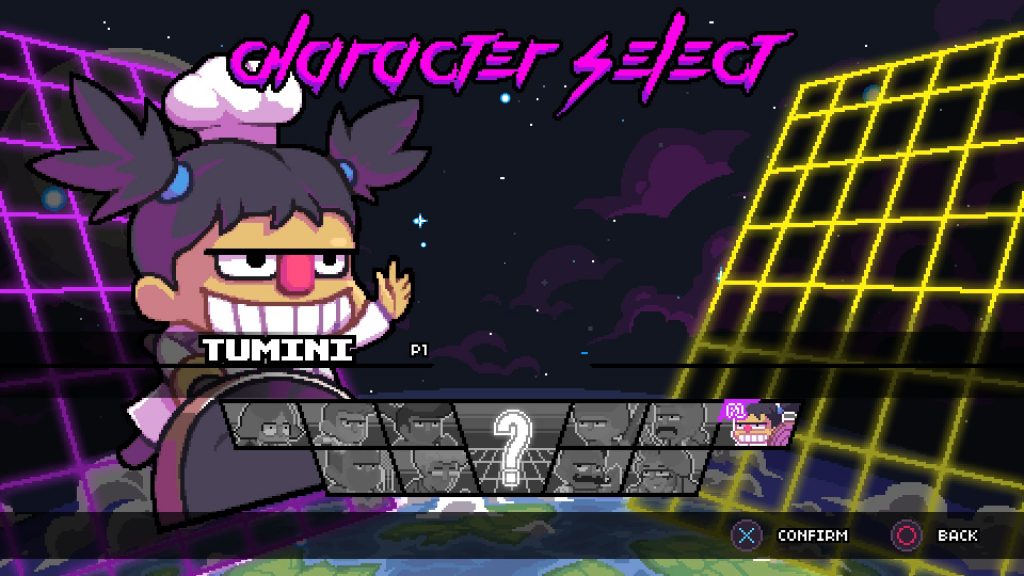 Ultra Space Battle Brawl is a great sports/fighting game between Pong, Wand Wars, and Breakout. It’s polished, its game mechanics and maps offer rich battles that I thoroughly enjoyed once I had mastered the basics. I think it is best played in 1 vs 1, as our 4-player experience turned out too messy to learn and play.