Ship-to-ship battles on a single screen.

A decade ago, Killer Queen made an impression on the small world of arcade cabinets with its team-based action platforming. Bombastically announced during E3 2018, Killer Queen Black then brought the alien battles to online territories on our PCs. Despite being well-loved, the title remains obscure. And yet, the exciting gameplay inspired a new descendant: Plunder Panic, trading the insectoid setting for a pirate theme.

Gameplay Video with the Developer

Plunder Panic’s action is contained within a single screen, in between the ships belonging to two teams, each with four objectives: 1) Bring back enough gold 2) Sink the enemy ship with a canon in the center of the map 3) Kill the enemy captain a fixed number of times 4) Ram a rowboat full of dynamite into the enemy ship. Completing any one of these tasks wins the round, and this is where things get complicated and interesting. The game can be played with up to 12 players or AI (6 vs 6), so good luck tracking everything that is going on! 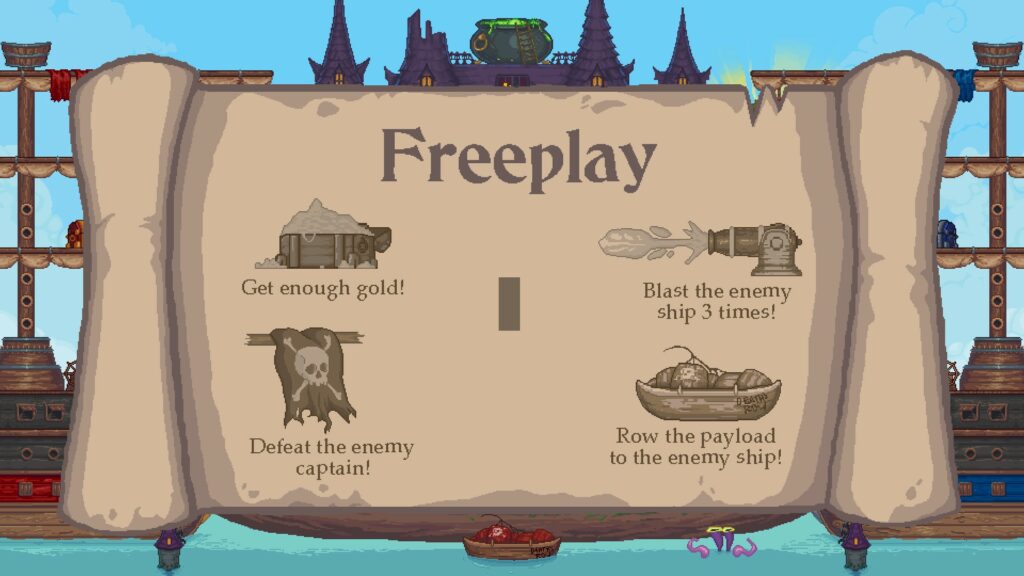 At first, I was overwhelmed by everything moving in all directions at the same time. But the more I played, the more I realized how much potential this provides: on a micro level each player can focus on an activity that they feel more comfortable with, whereas on a macro level team coordination can make the difference between order and chaos, between having no visibility to coordinating effectively attack and defense. Furthermore, it’s only a single screen, but brimming so much with various possibilities and different events that I never saw the game as repetitive. 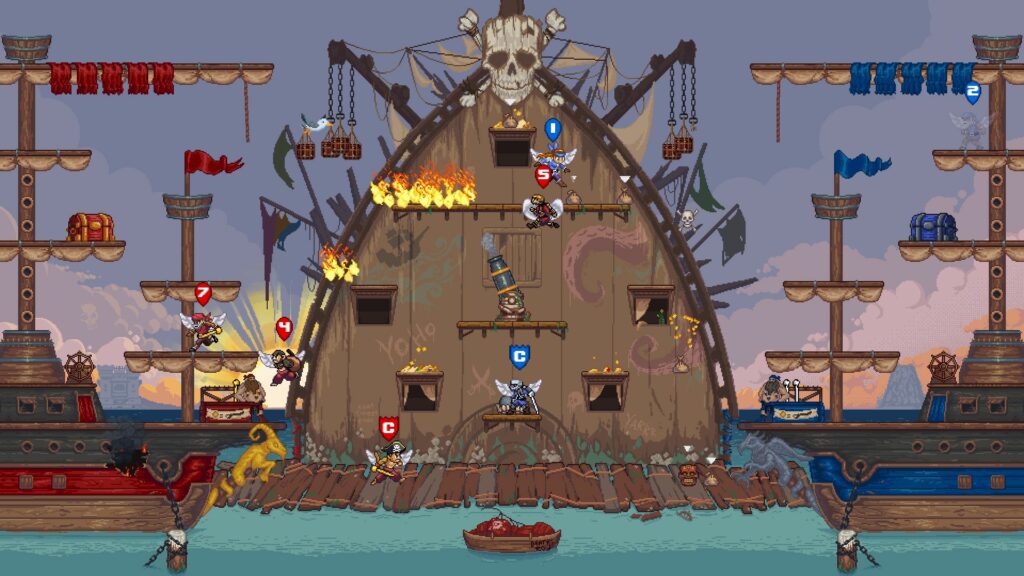 The controls are fairly simply: 1) a button to jump, 2) a button to pull or sheath the sword or drop items, and finally 3) a button for actions such as attacking with the sword or interacting with the environment and picking up items. Less buttons means that the game is easier to pick up for newcomers, and there aren’t complicated attacks to learn. The game is intense enough; depth comes from mastering the items and map control. While a lone warrior can make the difference, it is all about contributing to the overall goals of the team, and most actions require to sheath the sword and become temporarily vulnerable. 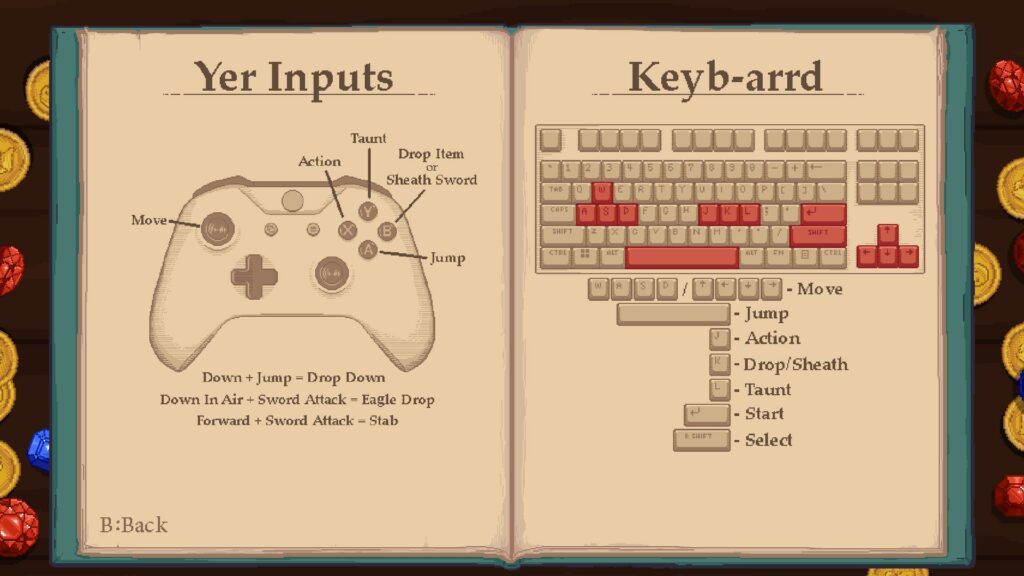 While the overall structure stays the same (two ships and a canon somewhere in the middle), there are several maps with each slightly different positions for their platforms, and a different theme. Most importantly, items give more options than just killing with the sword. Grab an idol meteors will fall in the general direction of the idol! Grab a squid and spray ink on enemies to mark them for the Kraken! Pick up wings and fly above the terrain! All sorts of items add variety and randomness to the proceedings, and they can be deactivated for competitive play or increased in a customization menu. Plunder Panic seems to work both for parties and esports, as its elements tailored for fun cohabit seamlessly with deeper strategic layers. 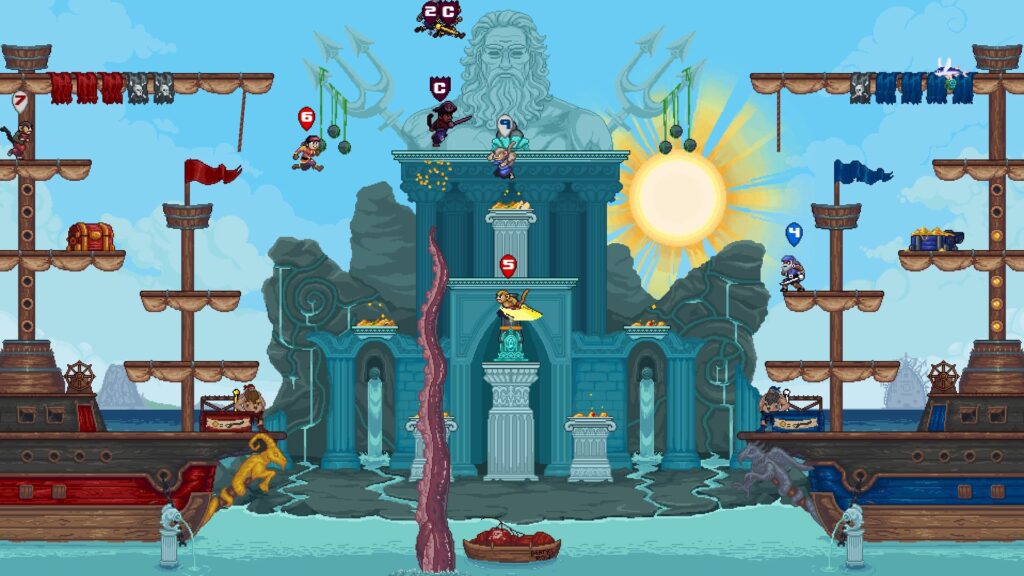 During our session, Will Jeffery from Will Winn Games commented that, in contrast to Killer Queen, the pirate setting is easier to understand for newcomers, and I cannot agree more. You can check out my baby steps and more game mechanics explained by Will Jeffery himself in the above video (cut from 1h to ~30min). Even though it took me a few moments to get my bearings and realize that while the captain always spawns with a sword, other sailors need to purchase their own swords with gold, everything is fairly intuitive and easy to learn with visual cues, although some finer points might be difficult to catch while in the thick of the action. In any case, once the player grasps a new concept, its execution is fairly simple. 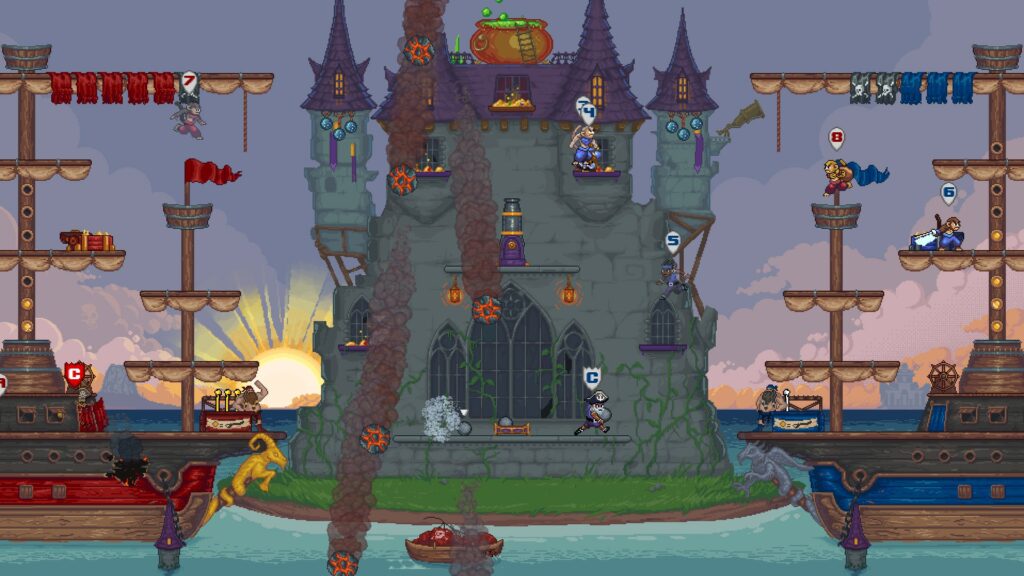 Devil in the Details

Plunder Panic is also very generous, with tons of small details that reveal layers upon layers of possibilities within the game, providing a pleasant learning curve. For example, the canon’s fuse shortens with time and can be cut before the shot. Or the dynamite can explode the enemy coffers and spill their gold all over the place. Hanging coconuts or other props can be cut to provide items. The captain can dive with the sword to attack from above. No sword? No problem: dropping a cannonball on an opponent sends them straight to pirate heaven. Even the backgrounds feature funny animations and monsters lurking under the waves. The pixel art is cute, and the sounds are perfectly aligned with the mood of the game. 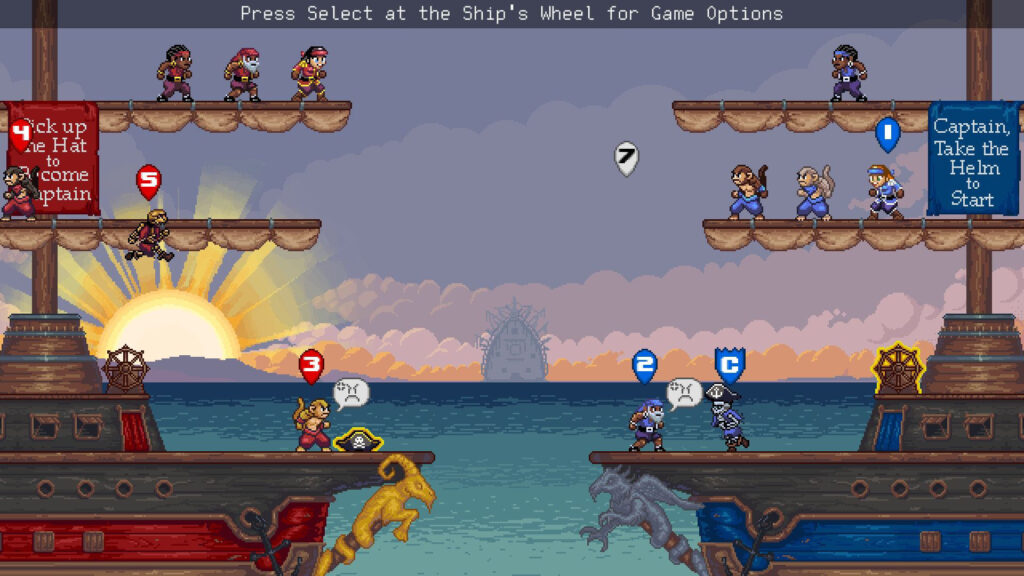 The game can be played locally. As I write these lines, there is no online matchmaking, but it is possible to play with friends online through private rooms. Alternatively, you can find sparring partners on the game’s Discord server, prominently featured in the game’s menu. For indie games, a lack of online players is always to be expected, although a strong community can always grow on Discord, so it remains to be seen whether Plunder Panic will be populated or not. On the extra plus side, console versions are on the roadmap, and with crossplay, there should be enough fodder for 12 player massacres. As a side note, even though I played across continents, the delay was barely noticeable, so the online experience seems pretty solid. 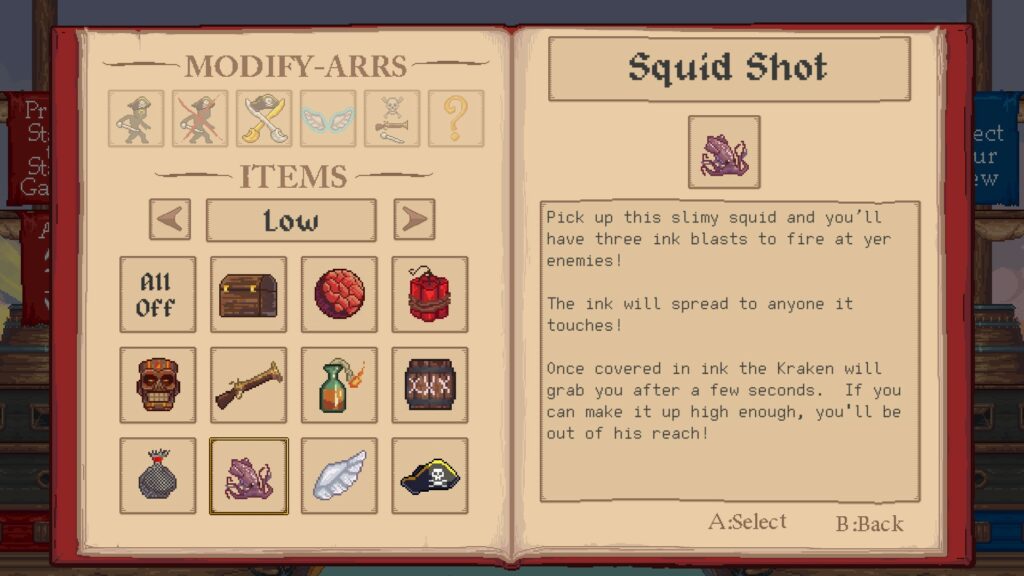 For now, my only negative criticism goes toward the interface in the menus (despite funny pirate language all over the place). For example, it is not possible to go back to the main menu in the character selection screen, until a character has been picked. To read about the items, I had to use the customization menu from within a lobby. I was confused on how to launch a single-player game with only the AI (leave with your ship, then the game lets you pick the number of AI opponents on the second ship). Finally, and most importantly, it is not possible to rebind keys, so the keyboard actions are on J K L by default (the movements are either WASD or the arrow keys). I recommend playing with a controller. The game is still in Early Access, so these points might get improved in the future. 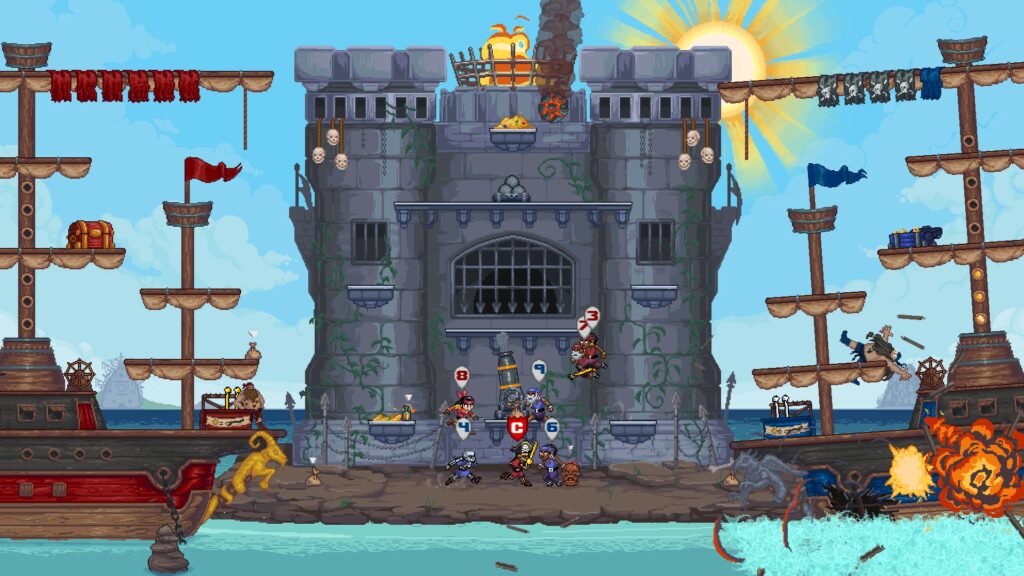 Plunder Panic has all the right ingredients to succeed both as a party game and a competitive game, as it provides plenty of fun and strategy. This is a labor of love, and it shows. It doesn’t even look like an Early Access game: it is stable and with enough content to pass off as feature-complete, down to every last detail. Still, there is room for some extra polish, new maps and tightening the ship, so if you like what you saw don’t hesitate to dive in, no need to be mindful of sharks: the developers won’t bite you and are eager for feedback before the full release.