Oh why couldn’t this case be as simple as it seemed?

Set in Vancouver that has since been walled off from the outside world, we play as Howard Lotor. Howard is a private investigator raccoon that’s really down in his luck as he’s only gotten the boring, mundane cases since he started. He actually has a case right now as Odette, a pregnant otter, wants you to find her husband and photograph him on whatever he has been doing after work. She suspects he’s cheating and she wants evidence for when she goes to divorce him so she gets custody for the kids instead of him. Howard tracks him down to a bar called The Bite, which is owned by the mob headed by a polar bear named Clarissa who is also in good talks with The Apes (which are the rulers of Vancouver). Except this simple case of catching a suspected cheating husband in the act turns out to be so much more. You uncover a horrifying fact that The Bite is a front for literally butchering up some of their customers and selling it to cannibalistic Ministers and The Apes. And at list until the end of Act Three, you try to figure out more as this is the case that will help a lot of people. You even scored yourself a partner who is a fox writer named Renee which basically call the shots once she starts helping you. 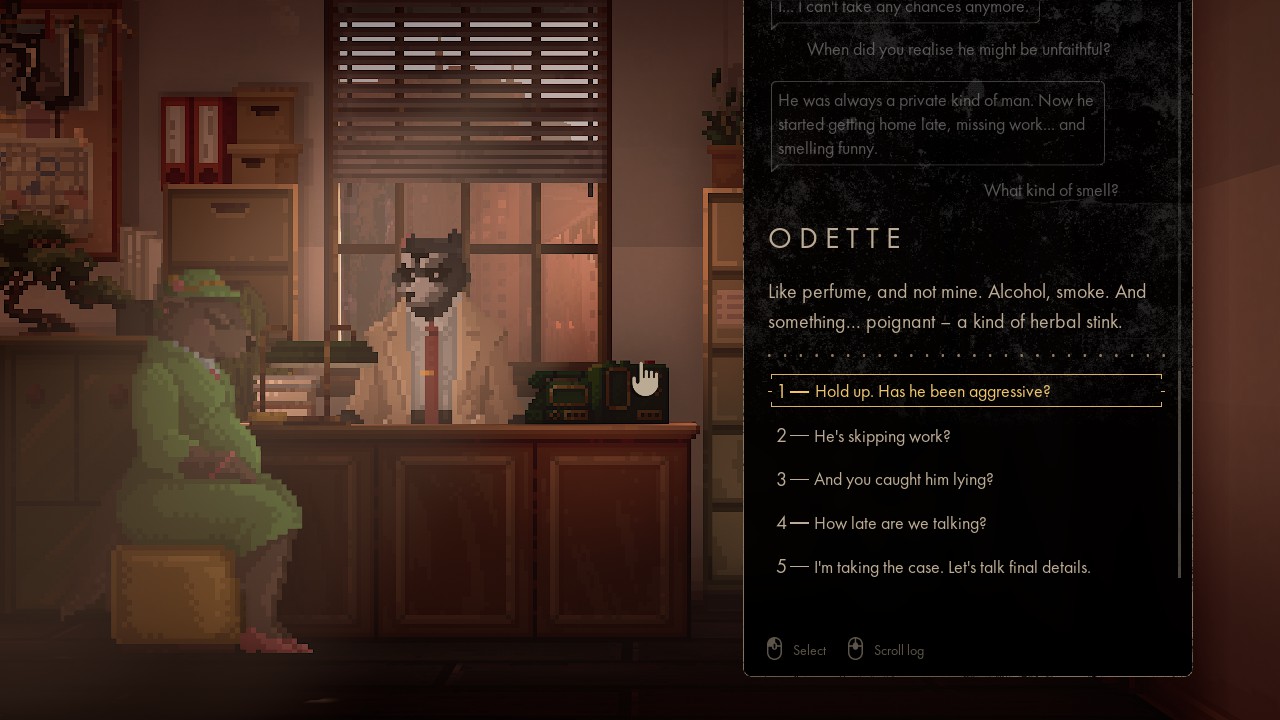 And well, I guess I’m going to turn negative early this time around. I really loved and was hooked with this case that was simple but got Howard tangled up in something bigger than him and got him to meet Renee who wants to do something more than just writing a book someone else wants her to write. I also really liked being introduced to this world and finding out more about it and the people (or well animals?) that inhabit it as I had Howard interacting with them. Backbone does a great job at wanting you to solve this case and unraveling this conspiracy, which is good for a mystery game, but bad for Backbone specifically considering what it does after Act Three. 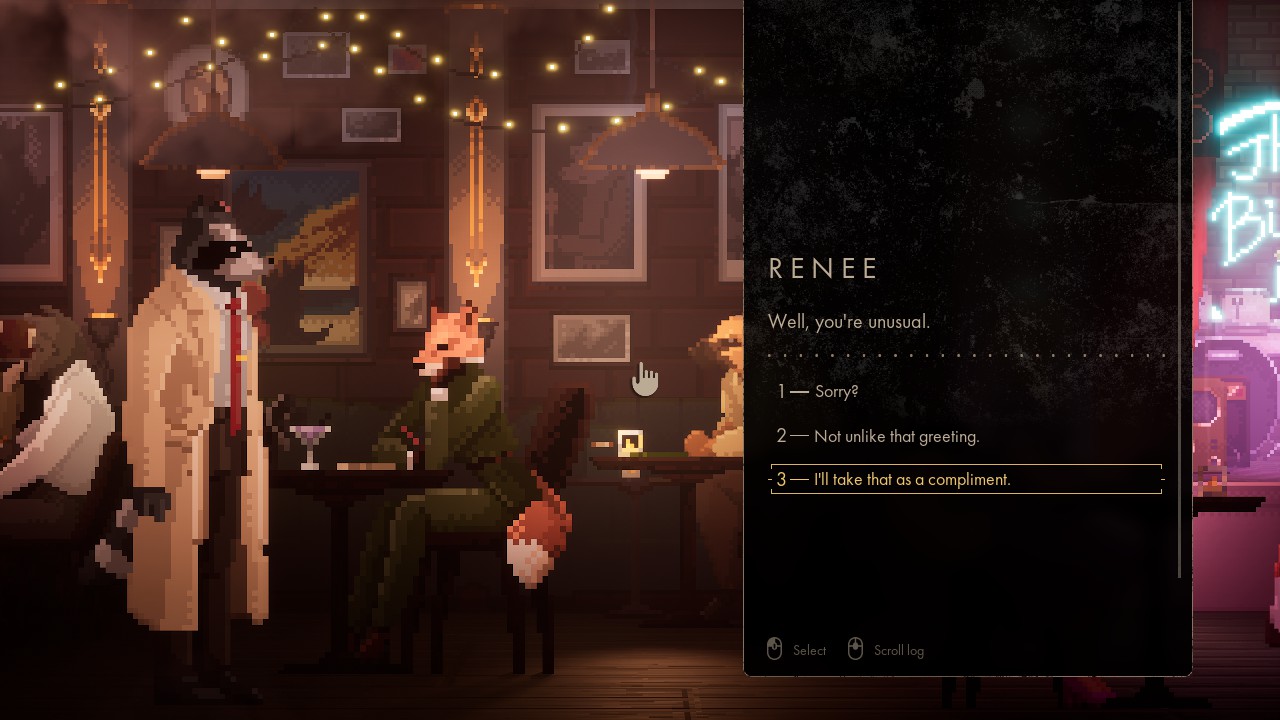 It mostly starts with the Prologue, which is pretty much the best part of the game. Based on the Prologue, which was released two years ago to hype people up and get a taste to what the full game will be, we saw that we’ll be getting puzzles, stealth sections, and multiple ways to confront a problem (ie getting into The Bite again). However, once you get past the Prologue, we don’t get any more puzzles, we get one more stealth section which was pretty easy, and the rest of the game being linear. It really is misleading to what the full game ended up being.

The dialogue choices you’ll be able to have also won’t affect how the story is going to go or end (it’s been confirmed that this only has one ending), but rather how Howard is shaped. However I did find instances where the game didn’t remember what I did before. In the Prologue you meet Florence and learn that she hasn’t been allowed to talk to her daughter and she believes that something bad has happened to her or she’s being held there unwillingly. This is filed for later on when Howard goes to investigate the connection between some missing girls. This obviously leads you back to Florence who remembers seeing you, but acts like she didn’t tell you about her daughter or to try to look for her. Acting surprised and pissed off even though she was the one that told you about her daughter. There was also one in my playthrough that happened immediately after a choice where I chose to use a normal mug, but then the game then just decided that I picked the mug that was obviously meant to offend the one I was giving it to.

While Backbone has beautiful pixel artwork to bring this world to life, great music, and good writing (as well as having the dialog to the side Disco Elysium style the whole game), the story simply could not live up to the potential it had with the Prologue. The puzzles, stealth sections, and multiple ways to tackle a problem that was showcased in the beginning turned out to not appear again (except one more stealth section) and the story turns into a mess in the last third of the game when it takes a sudden turn. Not to mention the sudden ending. This is also short, taking me around five hours to complete. I was conflicted on how I was going to rate Backbone, as this isn’t a bad game, but after sleeping on it, I don’t think I can recommend Backbone. The story is unfinished, in fact the case is far from resolved as more is added in during the Epilogue, and gets unfocused to introduce the sci-fi twist. This might have been different if we got the full story here, or if the sci-fi twist was handled differently if Backbone must have it (which I feel the game was perfectly fine and interesting with the mystery it introduced), but that isn’t the game we got.

While I was hoping this was getting a sequel, it looks like it most likely won’t as this is considered as the full game, the full story, the the developers (and honestly, I would have still been down to play a sequel since I do still want to see the case to the end, what happened to Howard after the ending, and the unlikely partnership that started in the Epilogue). So yeah. If you don’t care about the the story being unresolved I guess get this on sale (or play this through Gamepass). But otherwise don’t, especially if you were sold on the Prologue. 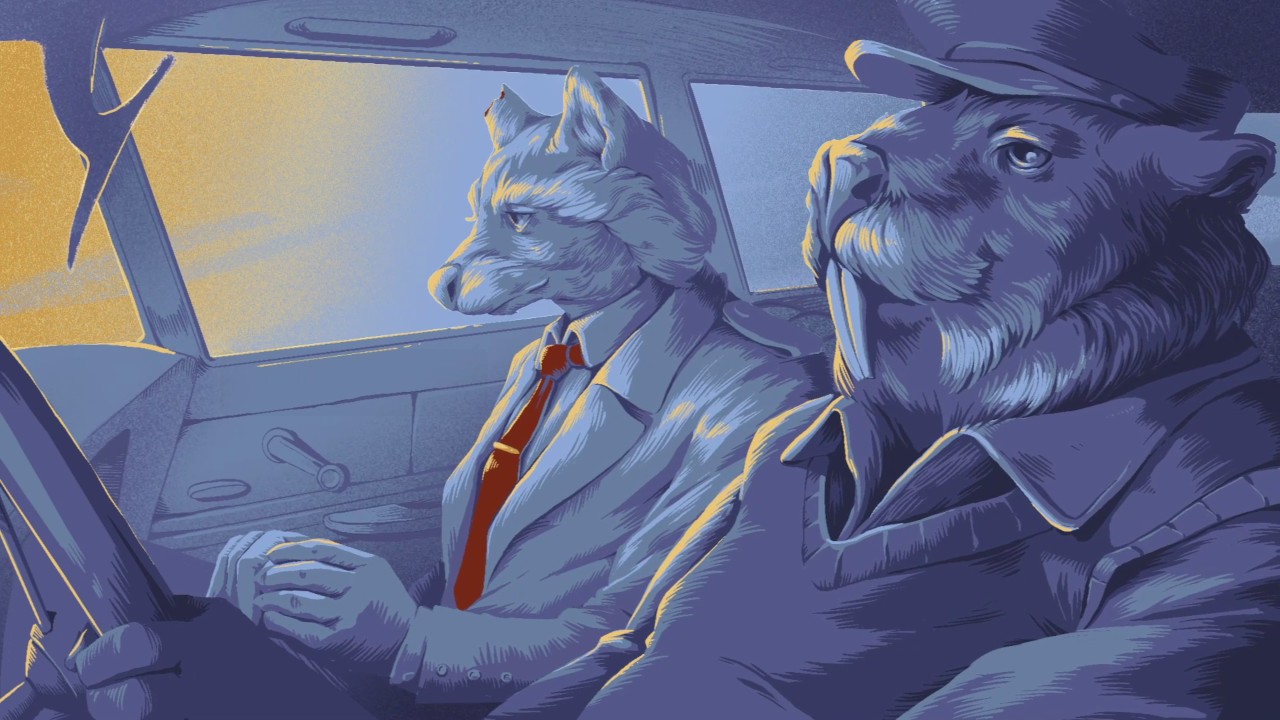