Simply put, one of the best RPGs ever made in all gaming history. New Vegas delivers exceptional quality on all fronts.

Fallout New Vegas (FNV) is a first and third person RPG set in the Mojave Wasteland, two centuries after the world was devastated by nuclear Armageddon. Players impersonate “The Courier”, at first a mere errand boy on a trip to deliver an unassuming package… that holds however an invaluable item. After being ambushed and left for dead, the Courier is rescued by a mysterious friend, and starts a legendary quest to take back what was taken – shaping the destiny of the Mojave and its inhabitants along the path.

Bigger, Better, Faster, Deeper
New Vegas improves on all aspects that made Fallout 3 a solid RPG, also adding entirely new ones. From a much more useful crafting system, way better written and thought-out roleplaying to the entirely new weapon modding and deeper skill / perk systems, New Vegas’ gameplay is a timeless masterpiece in all aspects. The main story and characters encompassing it are interesting, well-written and coherent with the setting, making it grand at all times from start to finish, while the choices open up for many possibilities.

Lost in the Wasteland
If there is one title so intricate, full of secrets, quests, nuances to make even veterans of the genre lose themselves into it for countless hours, it would be this one. New Vegas still today stands as one of the most shining milestones for the RPG genre as a whole, sporting not only an impressively vast world with literally hundreds of quests (many of which are not even marked), but also maniacal care for detail in each character, location, lore entry and environment. Exciting progression system, amazing weapon / enemy variety and outstanding roleplay variety complete the circle.

Collectors’ Delight
The world of FNV is packed full of collectibles, unique enemies, items and lore, tons of that too. Those who enjoy reading and scouting every little nook and cranny of every place will feel at home here, as the game is designed to greatly reward this type of approach. Rare and powerful weapons, lost prototype armors, upgrades for your companions, unique perks… all out there in the Mojave and beyond, waiting to be found.

Ultimate Edition
The DLCs included in the Ultimate Edition are nothing short of amazing. All of them without exclusion. I fully recommend getting the Ultimate version of the game not only because it’s more compatible with certain mods, but mostly for the amazing content it delivers. Each expansion brings about a completely new story, setting, enemies, weapons and everything else one would expect from a DLC with capital “D”. Now that is how expansions are done right. Modern devs take note. 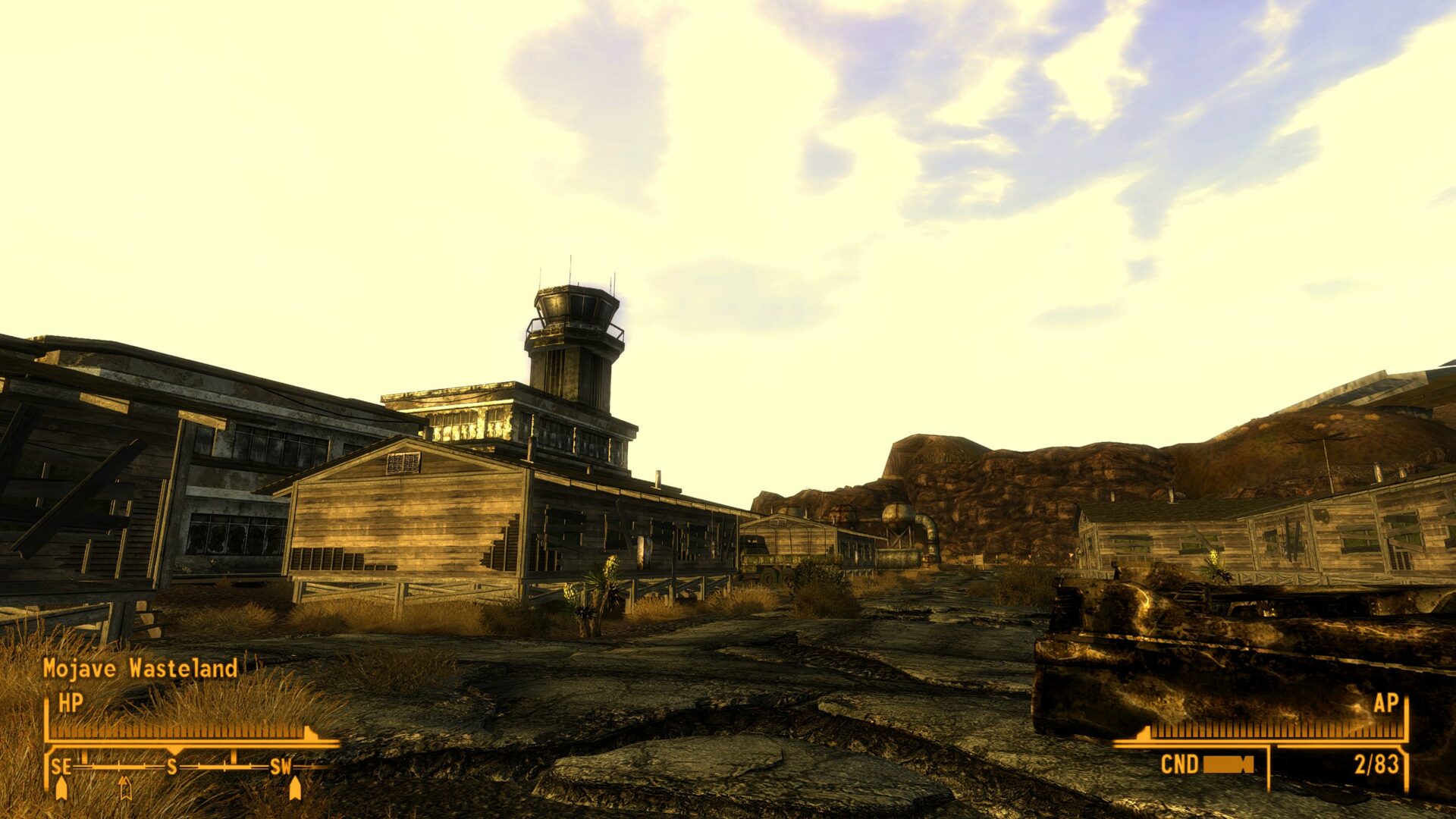 It’s bugged. Who would have guessed!
Fallout… Fallout never changes. Expect bugs ranging from minor glitches to catastrophic quest-breaking, game-crashing train wrecks of ridiculous magnitude. Community made patches and fixes can alleviate this by a good margin, however some remain and there’s nothing to be done about those. Anyone intending to play this game should follow guides, install the proper fix-mods and set up the files properly – which is annoying, but a necessary evil. 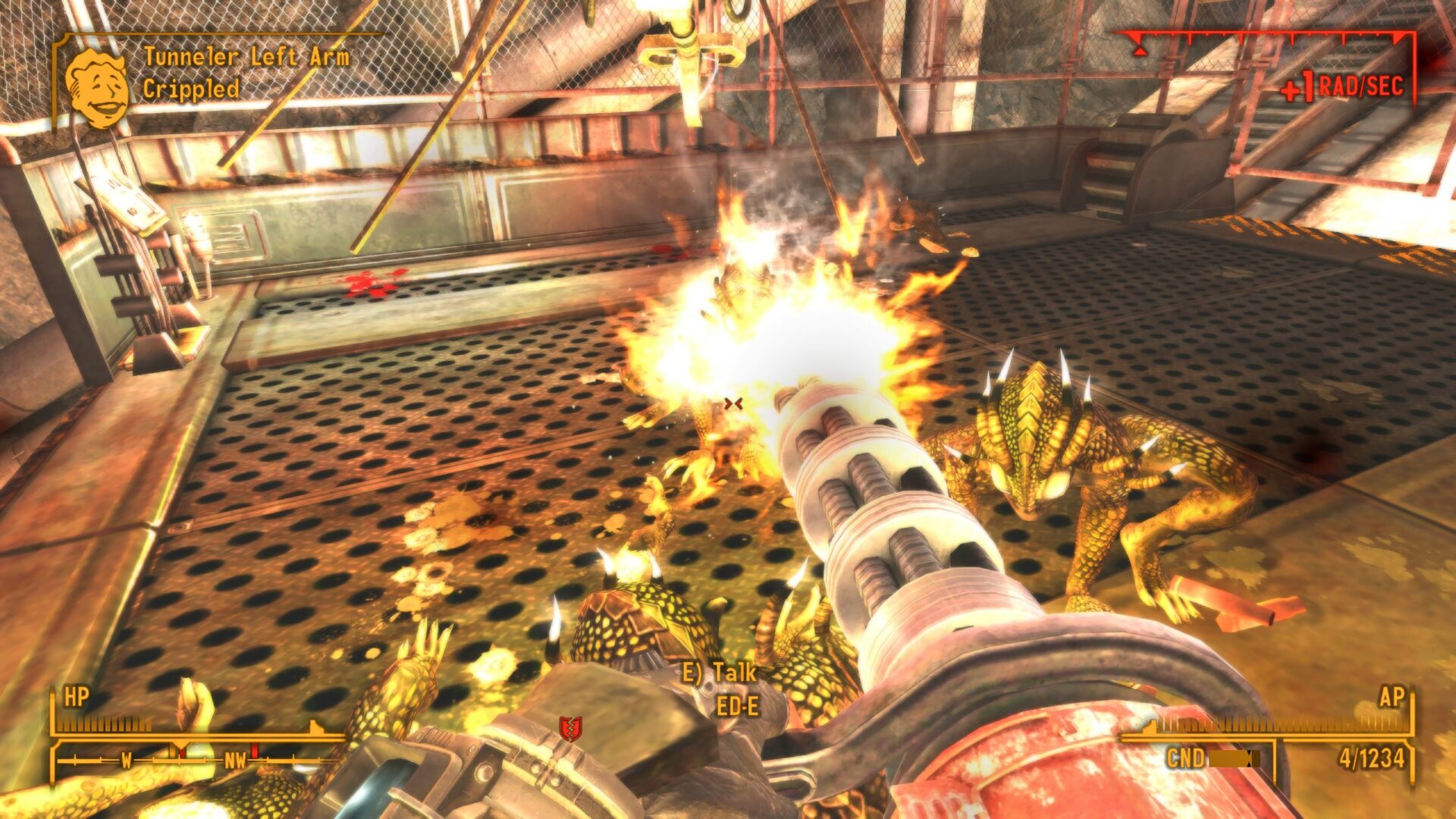 Exploration
… is performed on foot, patrolling the Mojave (and wishing for a nuclear winter). Along the road, The Courier will find many places, be they remnants of the Old World, bandit coves, ramshackle cities, or the jewel itself: New Vegas. Each location often has its own story, quests revolving around it, or other secrets to find: this makes every single dot on the map a carefully crafted, unique experience. Fast travel is possible at any time outside combat. The Hardcore mode (optional) also adds survival elements to exploration, such as thirst, hunger and sleep – other than more realistic weight values, companion permadeath and secret modifiers to certain locations.

Combat
… is performed in real time, or also with the signature VATS system, which simulates a turn-based fight by using Action Points, allowing the Courier to aim successive shots at enemies, influenced by CtH% based on their and enemy stats – just like in a turn-based Fallout of old. This system is however a secondary gimmick and not the main star of the show. Combat has been expanded upon since FO3. It now has attribute requirements and skill thresholds to use weapons effectively, more specialized perks, weapon modding and generally less spongy enemies: a marked improvement over an already good system.

Character Management
… is done via a series of menus comprising inventory, skills, perks, status and reputations. Each faction in the world changes its opinion of the Courier based on their actions, allegiances and other factors. One can even disguise themselves as a member of a faction to slip by unnoticed – but also risking attack by otherwise friendly ones. There is a deep, coherent reputation system encompassing all the Wasteland, eventual companions as well, which leads to being locked out of certain quests, or opening others in turn. The level cap is a whopping 50 with all DLCs, with new perks all the way to the top.

Roleplaying
… is performed mainly during environmental interactions and dialogues. Based on the protagonist’s skill set, held items, previous actions and even read lore files, there will be new options available for many such events, which can change the way NPCs react, situations develop, or quests proceed. An immense variety of masterful writing all across the board guarantees one of the highest quality roleplaying experiences ever realized, equaled only by very few other games. 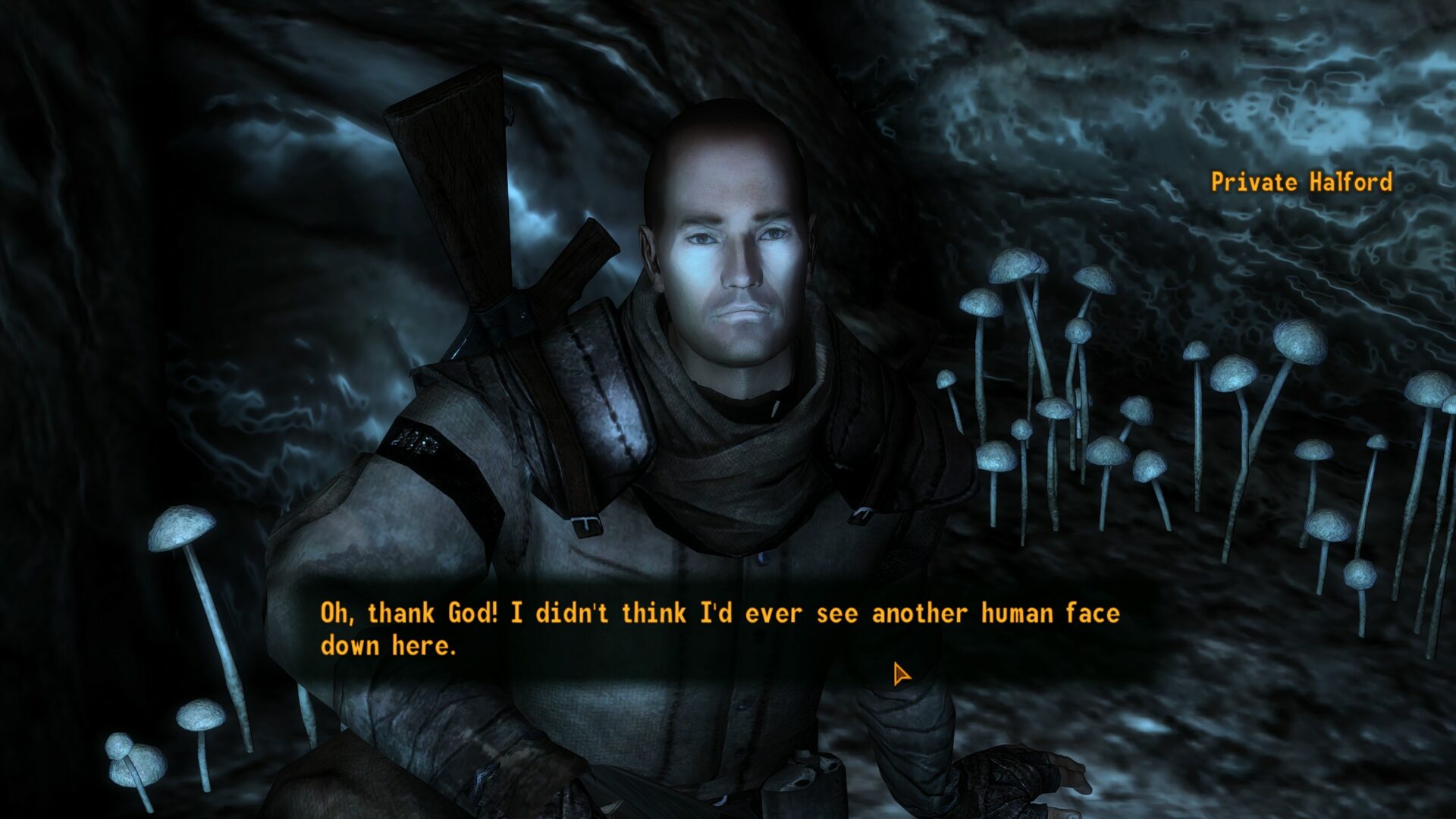 Fallout: New Vegas is a monument to everything and anything role-playing games should be. From its deep, well written and cohesive characters, to its exciting gameplay formula offering endless variety and its iconic locations, this is an adventure that enraptures and never lets go until it’s done. And after that, the fond memory of an amazing game never leaves one’s heart.