A visually charming 2D souls-like that however fails to deliver exciting gameplay.

Biomass is a 2D side-scrolling souls-like set in a post-apocalyptic sci-fi world. Players impersonate a being with no memory of its past, catapulted into a world so alien and foreign. After escaping a treacherous entity, a journey across desolate ruins of past civilizations, militia encampments and horror-infested tunnels begins. Many characters carved their own paths across the land; how the protagonist interacts with them shapes the path ahead, for better or worse. Good luck, Pilgrim.

Worn out places, worn out faces
The setting of Biomass is an ensemble of post-apocalyptic ruins and sci-fi contraptions more or less haphazardly put together, dotted with ramshackle encampments of drifters, militias and cults. There is a subtle sadness transpiring from the emptiness of many places, coupled at times with brilliant scorches of landscape. As with many souls-likes, it mostly uses indirect narration, visual cues and fragments of lore for players to piece together and form an opinion. Most characters have something to say, quests to give and interactions, some in the form of choices that influence what comes next.

Many dangers ahead
The locales forming up the world are home to a good variety of enemies and threats, from belligerent militants armed with firearms to deformed monsters sporting superior resilience. Weapon selection is well-characterized, as each murder tool has its own special attacks, patterns and style nuances. Boss fights are challenging and feature evolving patterns, other than a “secret” attack style that may unlock if specific conditions are met. In addition, choices and alliances heavily influence what bosses will spawn.

Better luck next time
The narrative premise focusing on choices, that result in diverse location conditions, allies and bosses, promotes a solid replay value. This factor combined with some build diversity possibility (albeit limited), give Biomass replay value for at least another run, or more, in order to truly see everything it has to offer. 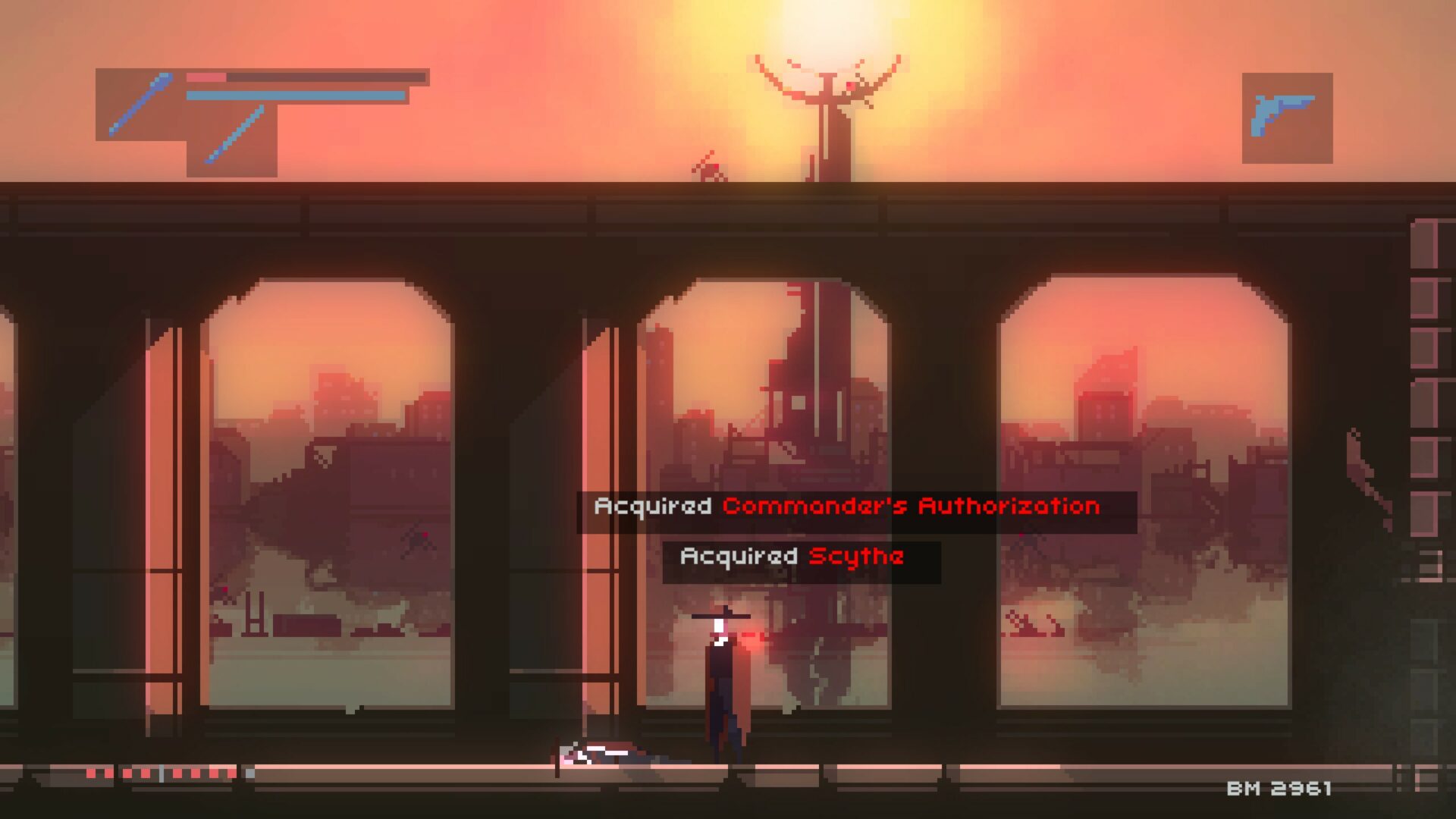 (Bio)Mass isn’t always substance
The combat, despite being challenging and having its moments, ultimately doesn’t feel satisfying for a number of reasons. Character control feels clunky, a sensation further amplified by the inability to jump or cancel attack animations partway with a roll. Secondly, weapon-unique special attacks are a nice feature but prove to be unremarkable and not worth using compared to regular ones. Dodges in my experience had a negligible i-frame duration while parrying is a pixel-perfect single-frame animation which is annoying to use reliably in combat and doesn’t warrant the risk-reward in the slightest.

I can’t believe it’s not speedrunning!
Healing in Biomass is a bizarre affair. Instead of traditional consumable healing of souls-likes, the game uses a kill-based gauge that fills up the more kills and damage players deal. Half gauge can be consumed for 33% healing, while for 100% a full one is needed. This would be a good concept if said meter didn’t deplete over time, exception made for the halfway charge (33%) which instead won’t deplete once reached. Ultimately however, this ends up forcing players to rush constantly, plunging into the heat of battle with recklessness, or lose most of the accumulated heal power.

Balance problems
Enemy strength and weapon effectiveness aren’t well-calibrated; for instance some of the most lethal enemies can be found early-on, while those seen later are quite less threatening. For weapons, using a heavy scythe or perhaps a rotating saw should do considerably more damage than your basic laser-blade… except that’s not the case. Heavier weapons don’t have the punch expected from them. Bosses are generally decently designed with their patterns and attacks, though some of them are far too spongy or have unfair mechanics, both factors making them annoying instead of fun. 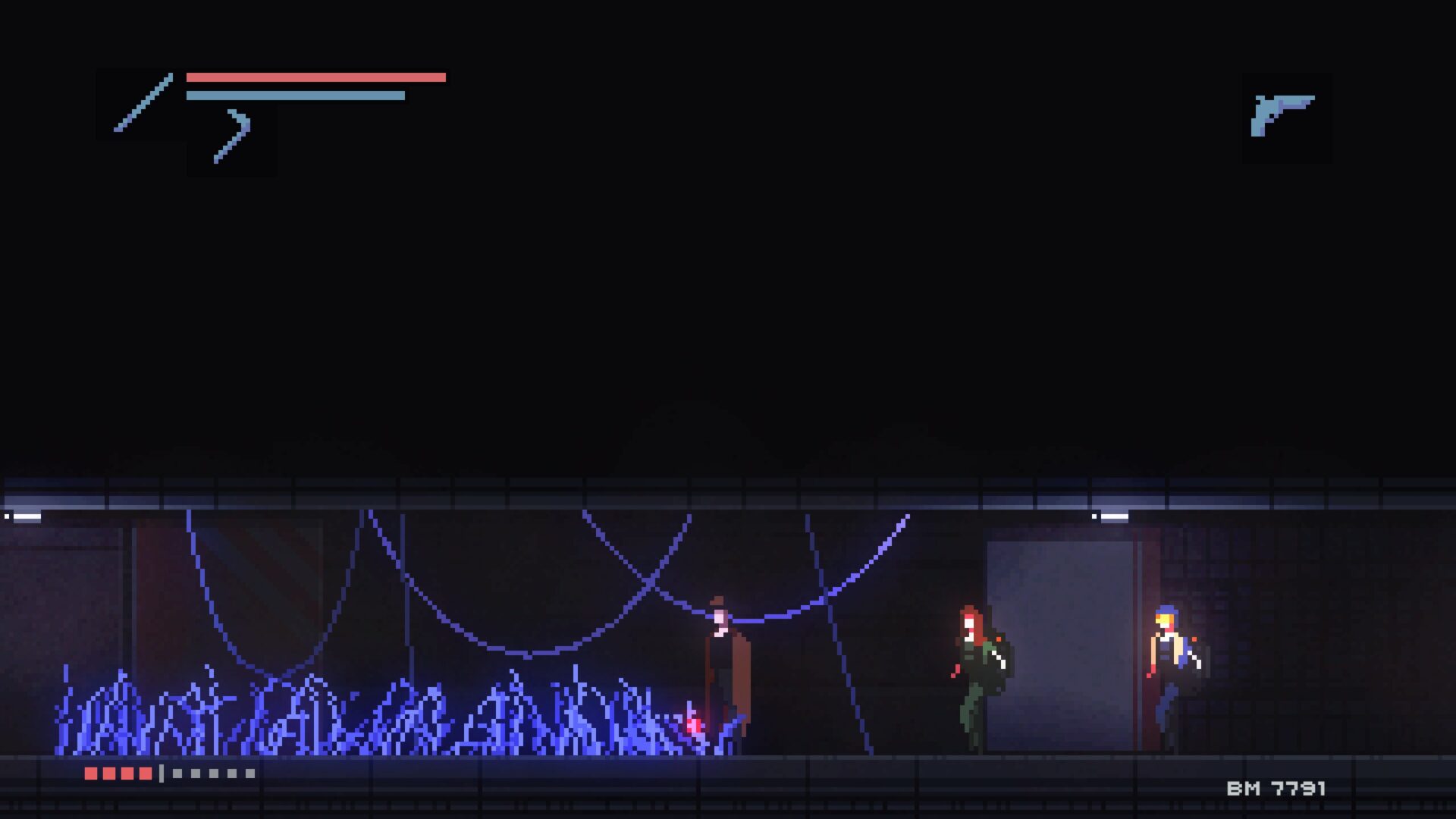 Gameplay is divided into Exploration, Combat, Character Management and Quests.

Exploration
Is performed on foot, and occasionally by traversing ziplines or using elevators. As customary for the genre, the game doesn’t have a map – which isn’t really needed either, since each location is not overly complex and has few if any secondary areas. While exploring players come across various characters that may react differently in relation to previous choices or the garments worn at the moment. Some side-areas may house unique enemies or equipment pieces. Terminals act as bonfires, allowing healing, upgrading and crafting – all done using Biomass (souls).

Combat
Is done in a side-scrolling fashion, with melee or ranged weapons. While the first don’t consume any stamina, firearms will, but also have unlimited ammo. As expected from a souls-like, enemies have attack patterns one has to see through to locate weaknesses, then strike – or dodge using the well-known rolling animation. Unlike most however, the roll has no i-frames which will definitely upset purists of the genre, while enemies don’t seem to have stagger thresholds, weaknesses to elements or any more complex statuses to exploit or inflict.

Laser weapons can deflect or even return to sender bullets and other laser weaponry, a cool but ultimately gimmicky mechanic that sees seldom any use. The combat has decent foundations but then goes into the realms of the bizarre and shallow, ultimately delivering an experience that leaves players wanting, or puzzled at some design choices.

Character Management
Is simplistic, and consists in using Biomass to upgrade one of four attributes, either upgrading health, stamina, ranged or melee damage. Each level costs more then the previous, of course. Terminals can also be used to craft utility items with the right blueprints, such as consumable buffs or throwing weapons like grenades. Weapons and gear cannot be upgraded, and neither can the passive Mods one may have available, often enhancing the character but also with drawbacks.

Quests
Are often cryptic in nature, and given by random NPCs of the world. Sometimes they might be a more clear escort mission, or a repair task. Clearing them often results in rewards, areas unlocking, and the global story taking a certain path. Failing them results in different events. 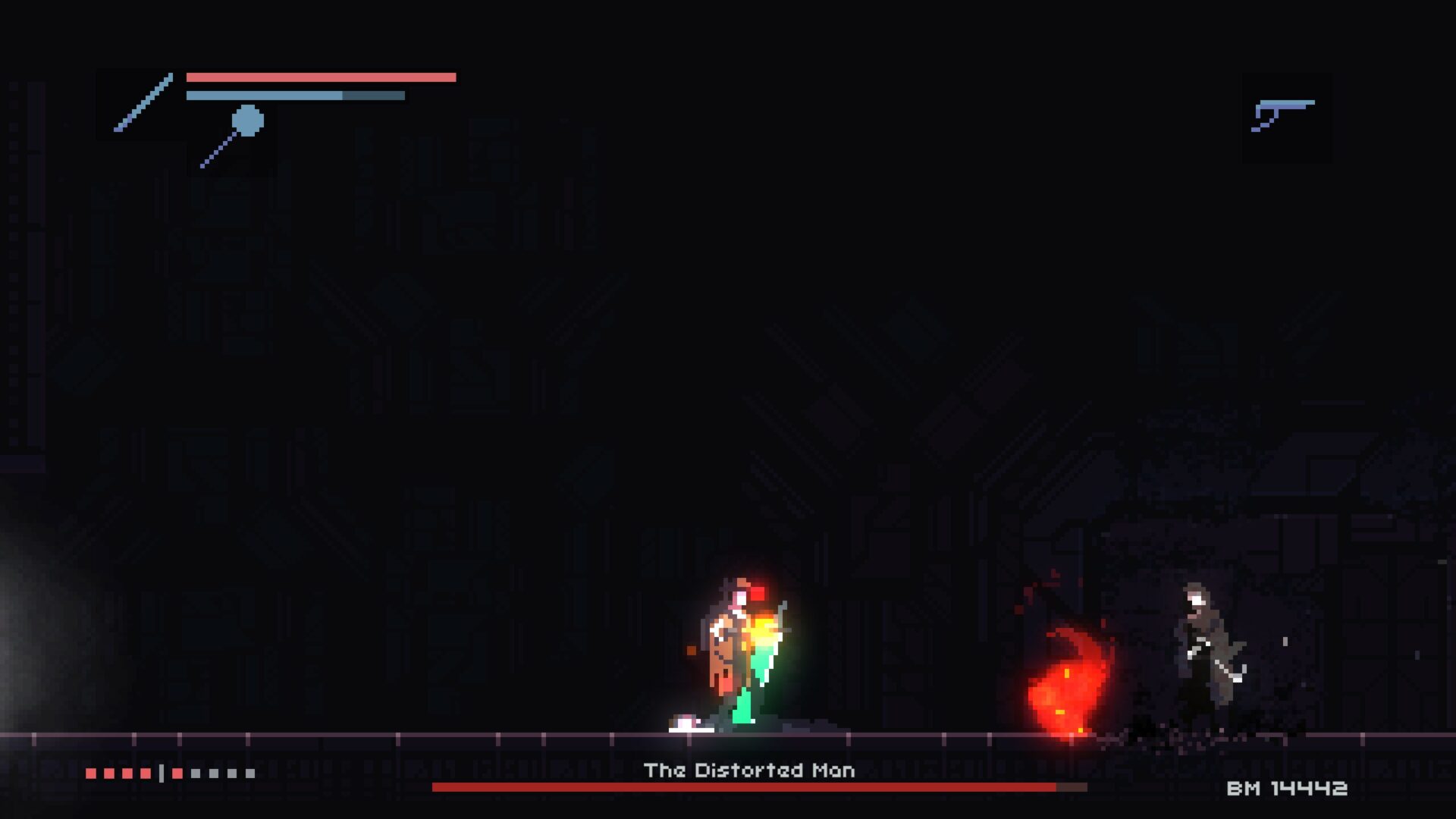 Biomass is a charming title with appealing visuals and challenging combat, some unique mechanics as well. However, it treads far into the experimental realm as far as this genre is concerned, making some bold design choices that ultimately don’t work well and compromise the flow of gameplay in its entirety.