Bound by the need of friends.

Blightbound is a rather interesting and fresh concept – a 2D style brawler/hack n’ slash dungeon crawler ARPG with an emphasis on cooperative multiplayer. It does feel very much in the Early Access state it currently is – needing both content and more reassuring player base numbers but the core game presented has the potential of something truly fantastic and fun.

Blightbound works like an Action RPG at the core, but with the novelty of being in 2D – almost like a brawler such as Streets of Rage. There are 3 classes, each with associated characters with not only their own lore, but also unique skills, making them feel like subclasses.
As the Warrior, you are the tank of the squad, defending lots of damage and taunting enemies in order to keep them away from the squishier classes – the Assassin and the Mage. The Assassin has great DPS capabilities due to backstabbing and critical damage bonuses but lacks the health and defensive capabilities of the Warrior. Both these classes and heavily dependent of the Mage, a very squishy class that has really powerful spells and has the ability to heal, making him a jack of all trades that requires constant protection from the other 2 squad members.

The combat feels really good, the Mage’s being my personal favorite. There’s a great deal of different tactics and communication required as the enemies deal a lot of damage so making good use of class synergies and balancing combat among all characters is crucial for a successful victory. 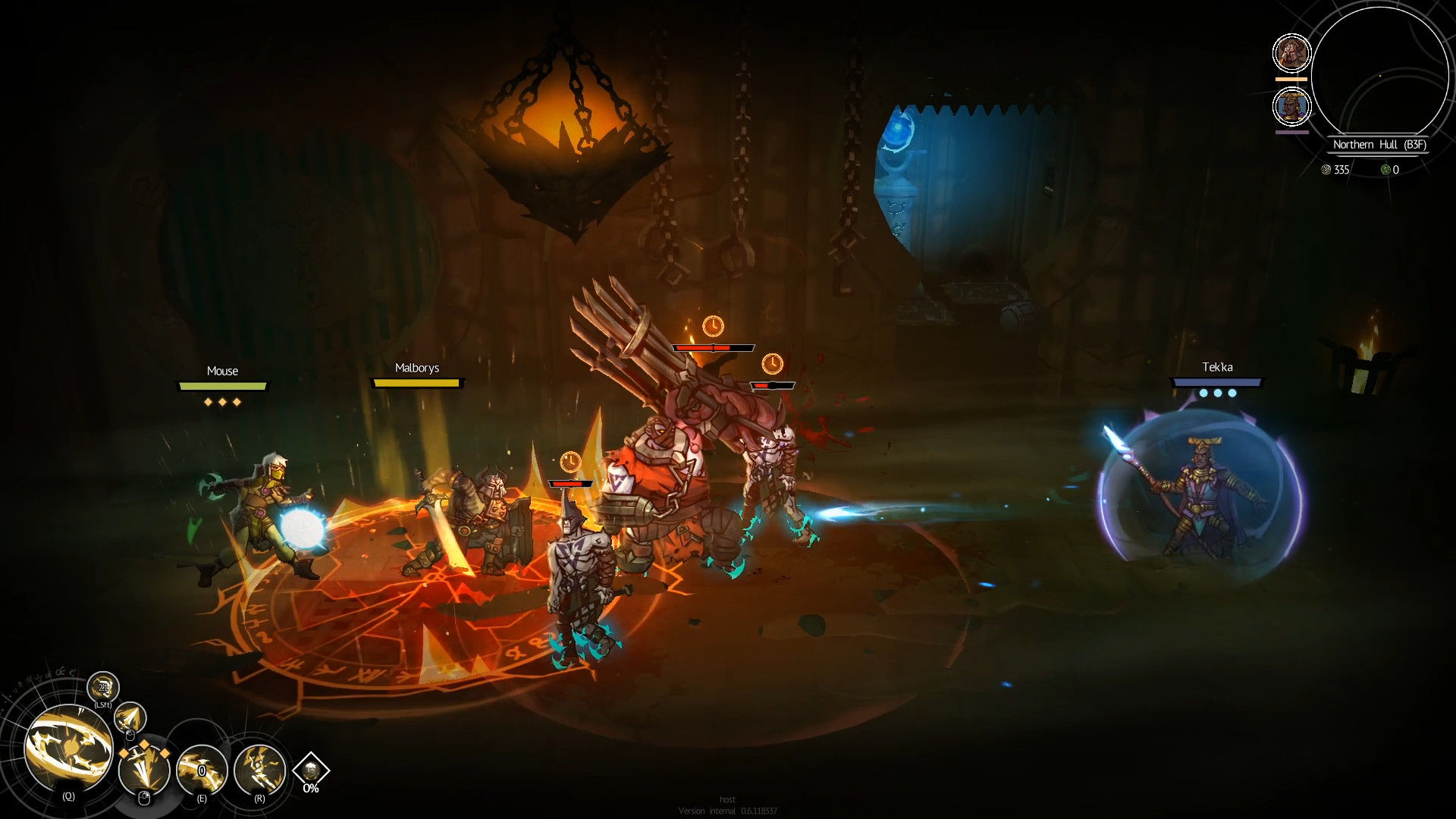 You start your game in the Refuge, a town-hub of sorts that lets you manage everything – all your characters (level their stats, cure their blight or give them better gear), buy and sell loot you found on levels and recruit other folks to help you progress. Progression in the Refuge is done by playing – your characters will get stronger but your Refuge will also improve – giving you access to more features such as crafting, the above-mentioned merchant and so on.

I mentioned curing Blight above, so what is it? There are two interesting mechanics tied to playing levels:

– Blight will “infect” your character after exiting a level, especially in two ways – level completion (if you beat the level successfully, your blight will be considerably less) and downs during gameplay (which give a multiplicative increase to Blight gained). Once you reach your maximum blight acceptable (threshold increases with Refuge upgrades and stat upgrades for your characters), the character

– You have Notoriety attached to your party – starting at 0, after completing levels with the same party (be it made of randoms or friends of yours) it will increase and thus, raise the difficulty and the loot rewards for following levels you play, thus rewarding parties that work and stick together throughout multiple levels and completing them successfully.

I like both of these unique concepts but I cannot get behind the Notoriety system right now for the simple fact that there are not many players in the game right now (averaging about 150 people at any time per day across all regions), so you either have 2 friends to play with and you play together levels in a row or you have to queue and wait (at times I just could not find a third player at all and the game doesn’t start with 2 players) and pray that someone doesn’t leave after the level is done. Your loot is directly tied to the luck of good random mates or that you manage to get 2 other buddies to play with you, it’s frustrating and takes away the motivation to play a bit knowing you can’t get the best loot possible most of the time.

You are forced to play with 2 other players at all times so you can’t even go for some offline play or grind a bit to catch a friend – technically you can, but you need to queue and get other players, whose levels don’t seem to be balanced with yours, so I was often queueing with fellow players that already had the legendary late-game gear (there isn’t that much gear to choose from, actually) that would just absolutely SHRED every single enemy on-screen since my Notoriety was typically at 0 so the difficulty was low and I was just basically spectating the entire time while some assassin with +200% backstab damage just smashed all bosses in 2 nanoseconds.

But… the times the teams were at similar levels and gear scores, the difficulty felt right and I actually had to sweat a bit to beat the level, the game felt fantastic and I can’t recommend it enough. It’s in a very Early Access state and it shows, I faced quite some bugs during gameplay (most of the game-breaking ones such as desync issues have been fixed in remarkably fast hotfix releases) so beware when buying that there’s quite a bit of ironing out needed before you have a stable experience. 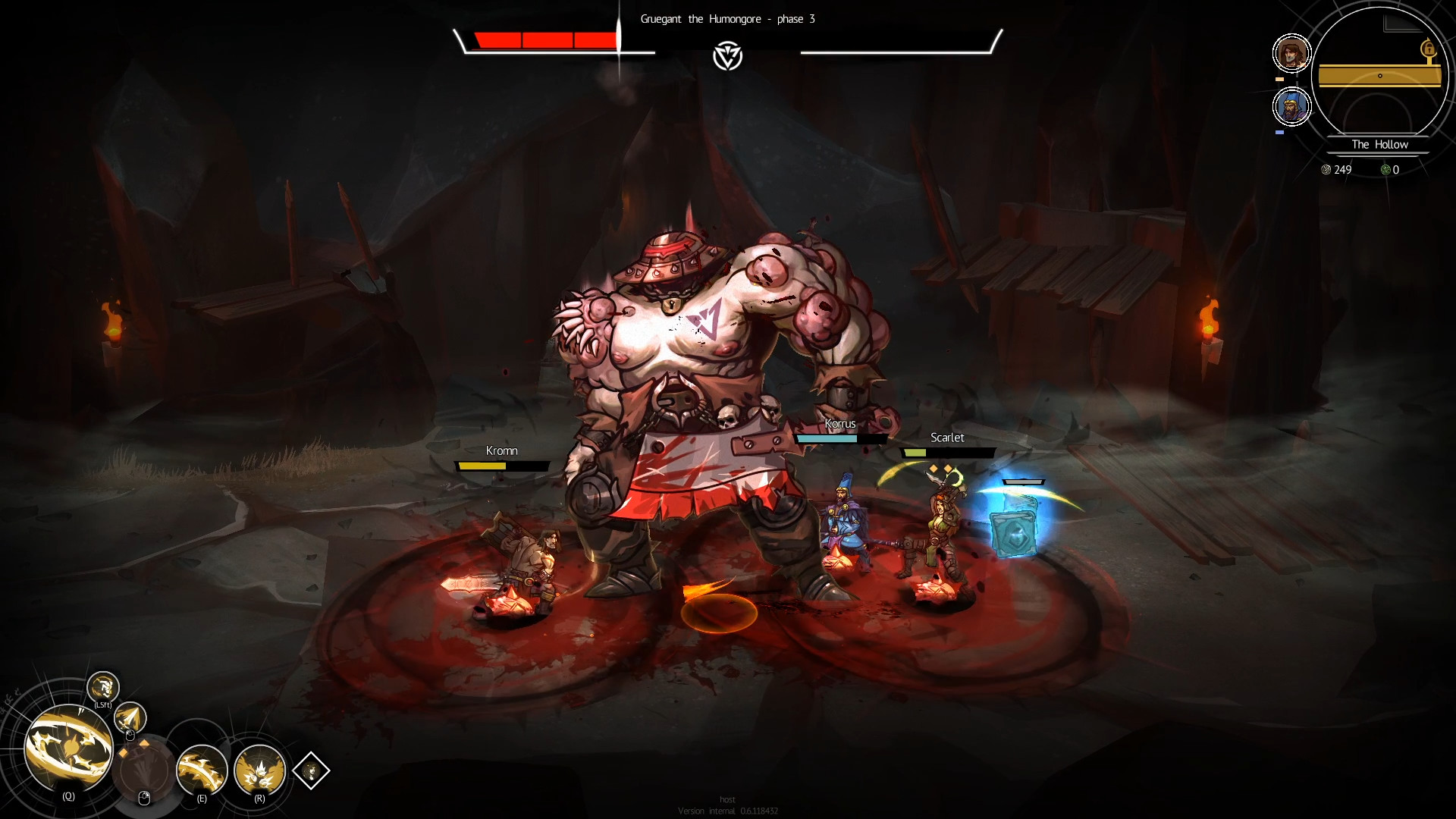 Overall, Blightbound has a great blend of Action RPG and 2D brawling as the core gameplay during combat and exploring levels feels fantastic. There are also some really unique and interesting ideas but sadly some are not well thought out and feel like a gimmick rather than a proper mechanic to beware of – the lack of players also doesn’t help some mechanics such as Notoriety and the overall matchmaking experience can be less than fortunate depending on region and hour of the day.

Firstly, the phenomenal soundtrack. Really great tracks during exploration or when managing the Refuge. The sound effects during combat help the melee feel better than what you’d expect from the average 2D Brawler. Each character has its own (well done) voice acting that generally fits each personality really well.

Graphically, Blightbound has a really stylish (and well done) cartoony art style that will resemble a lot of the Klei Entertainment games (Griftlands, Shank and Mark of the Ninja, among others), with a very charming cell shading attached to the cartoon style. The lighting and the color palette change depending on the level and give a great sense of atmosphere and grimness in the blight infested world you’ll find yourself in this game. 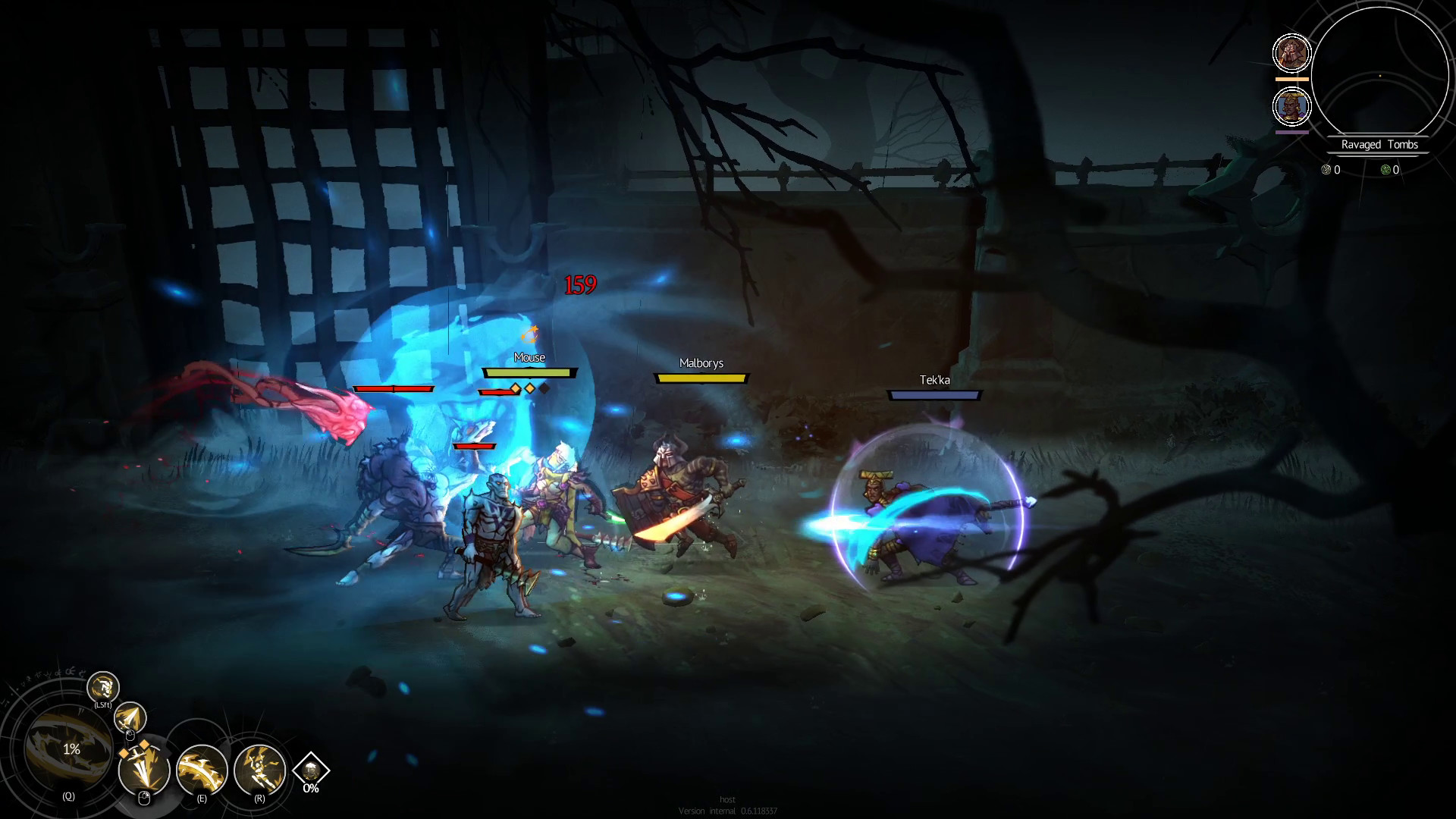 The only downside on the technical part is optimization, which can be forgiven due to the Early Access state of the game. It’s nonetheless frustrating playing a game I should be running flawlessly at 10 FPS (!!) during more intense scenes (also known as about 8 enemies are on-screen and some visual effects from attacks are displayed) which do not justify the performance drops AT ALL.

Despite a considerable amount of flaws both on gameplay (poorly thought out mechanics) and overall framerate/performance, Blightbound remains a really fun game to play with unique mechanics that give it a much-needed freshness, enhanced by its 2D gameplay perspective. Definitely recommend keeping an eye out on this game on a sale or further down the Early Access period as it’s not worth it for solo play at the moment. I can fully recommend it if you can buy the 3-pack on steam, currently at 41,99€ which is absolutely worth it if you have friends to split the pack with.