And an even bigger heart.

As the car hums past different scenery everyone fidgets slightly. The young girl and boy in the back seats look around, bored probably, as the car zooms along towards a destination unknown to the player. Steering the bright red convertible, a brunette woman in shades shifts her gaze slightly, accompanied by a man that lets his arms hang outside the car every now and then. This is the beginning of a quiet little camping trip. 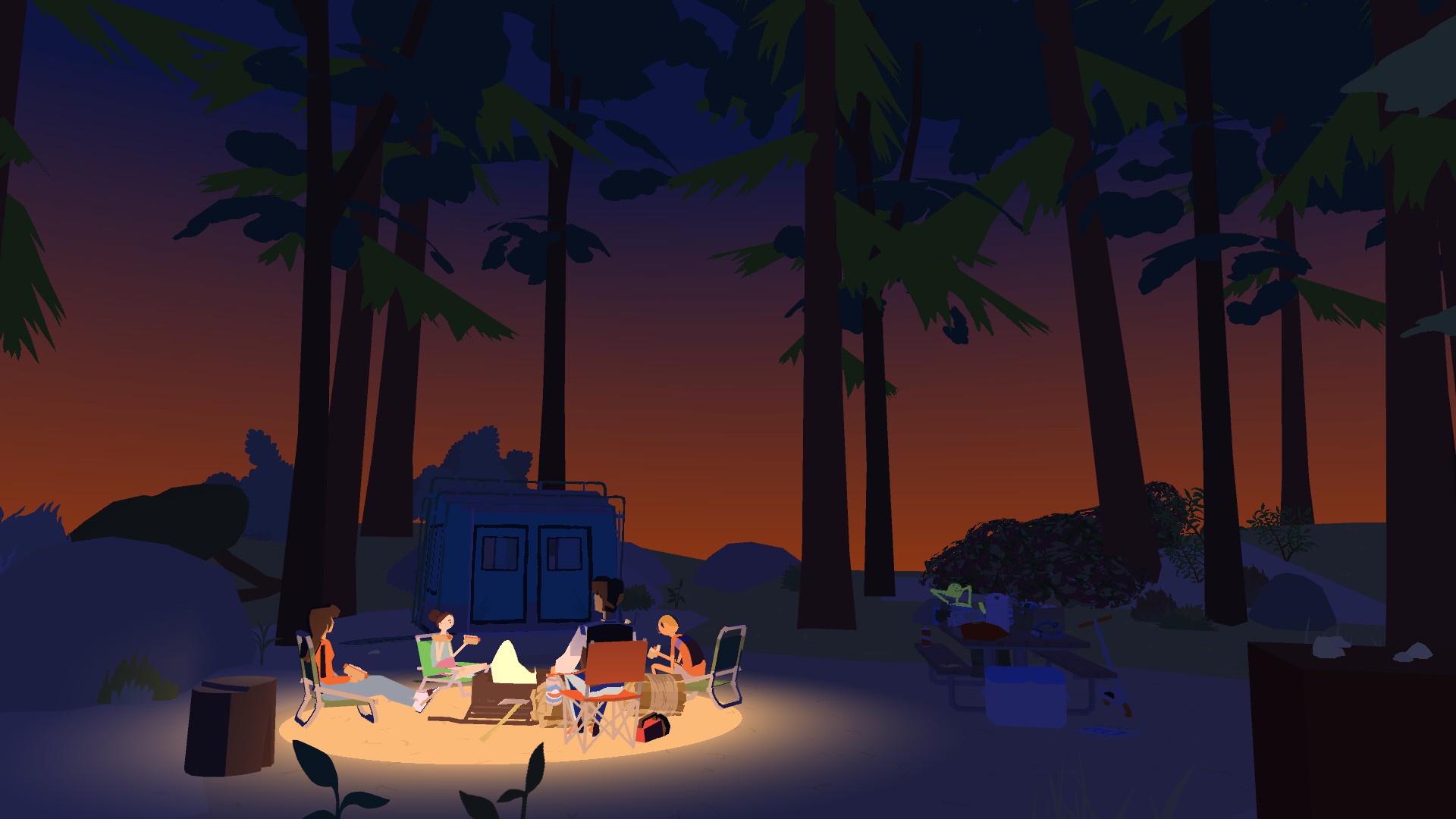 From the store page alone the expectations for Wide Ocean Big Jacket should be set: it’s a short camping trip about a niece, her new boyfriend, her aunt and her uncle. But this simple premise houses lots of simple, slice of life moments that add up to something more. 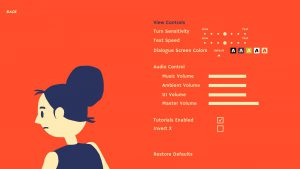 The feelings it’s able to portray with bold colors and sparse lines of dialogue is impressive. The design of the game, from just the menu alone, speaks volumes in terms of the artistic approach of the game.

The story isn’t necessarily led by 1 of the 4 in particular and even the setting itself is an important part of how the narrative feels. Mord, a wild, headstrong girl is easily quotable in her silly dialogue but also in the way she is thrusting herself into the role of growing up; she is trying so hard to find out what love and relationships mean and even approaches “the talk” with her aunt in such an honest way.

Mord’s timid, bespectacled, sesquipedalian boyfriend gets to have his own touching moments as he discusses his family life. Then there’s Cloanne and Brad who are trying to entertain and protect their precocious niece while deciding where their own relationship should go. 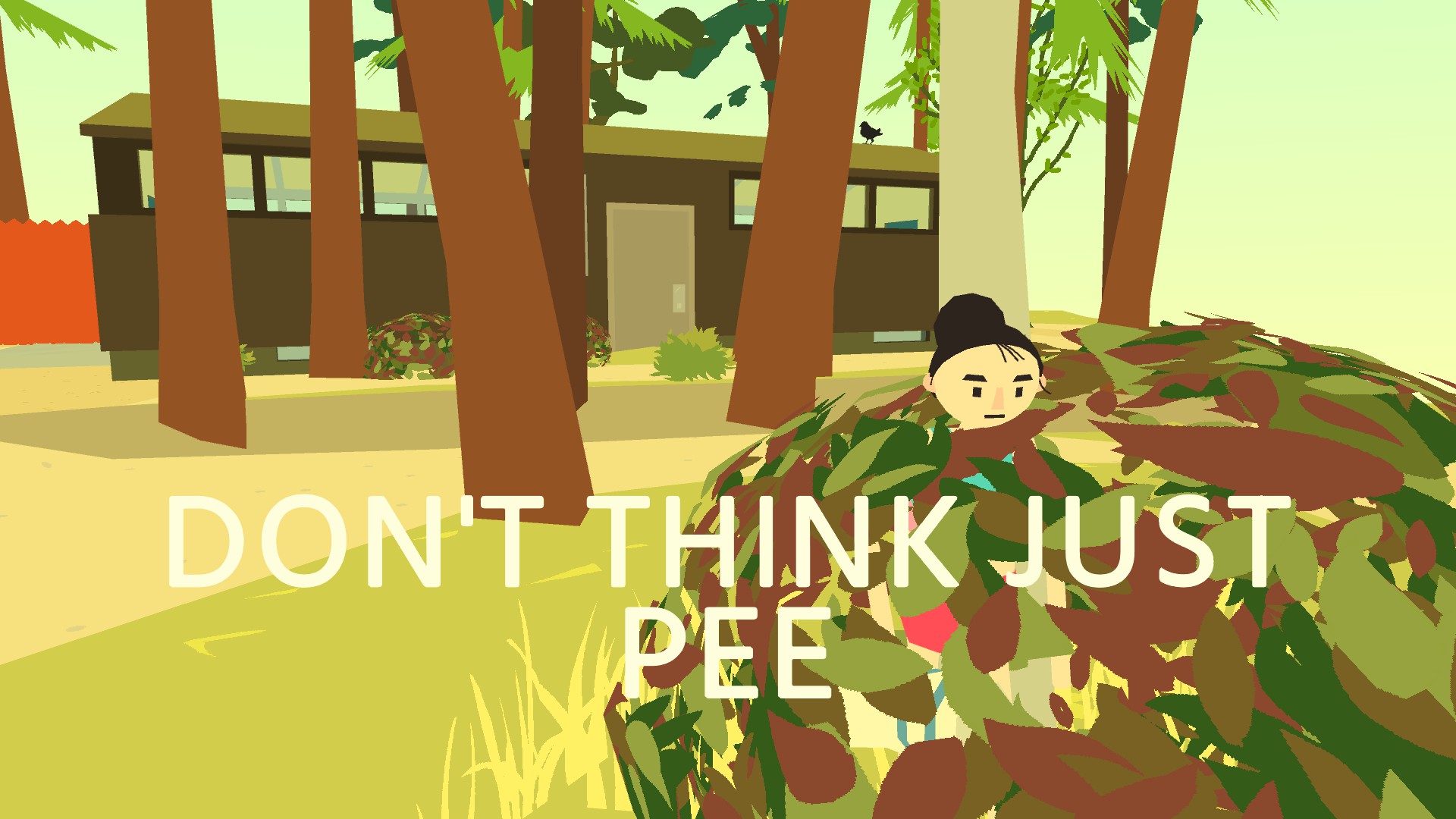 The stylized cinematography, eye-catching color choices, family-centric themes, and off-kilter comedy are probably familiar. The title card introduction and jangly pop and strings of the soundtrack alone would make it easy to jump to Wes Anderson, but there is more just beneath the bright surface of WOBJ. At times it feels like WOBJ is only a hair away from sliding into an early Noah Baumbach-esque tragicomic breakdown. The dialogue, told with intertitle cards featuring a cartoon rendition of the speaker, manages to be silly and serious at different times. 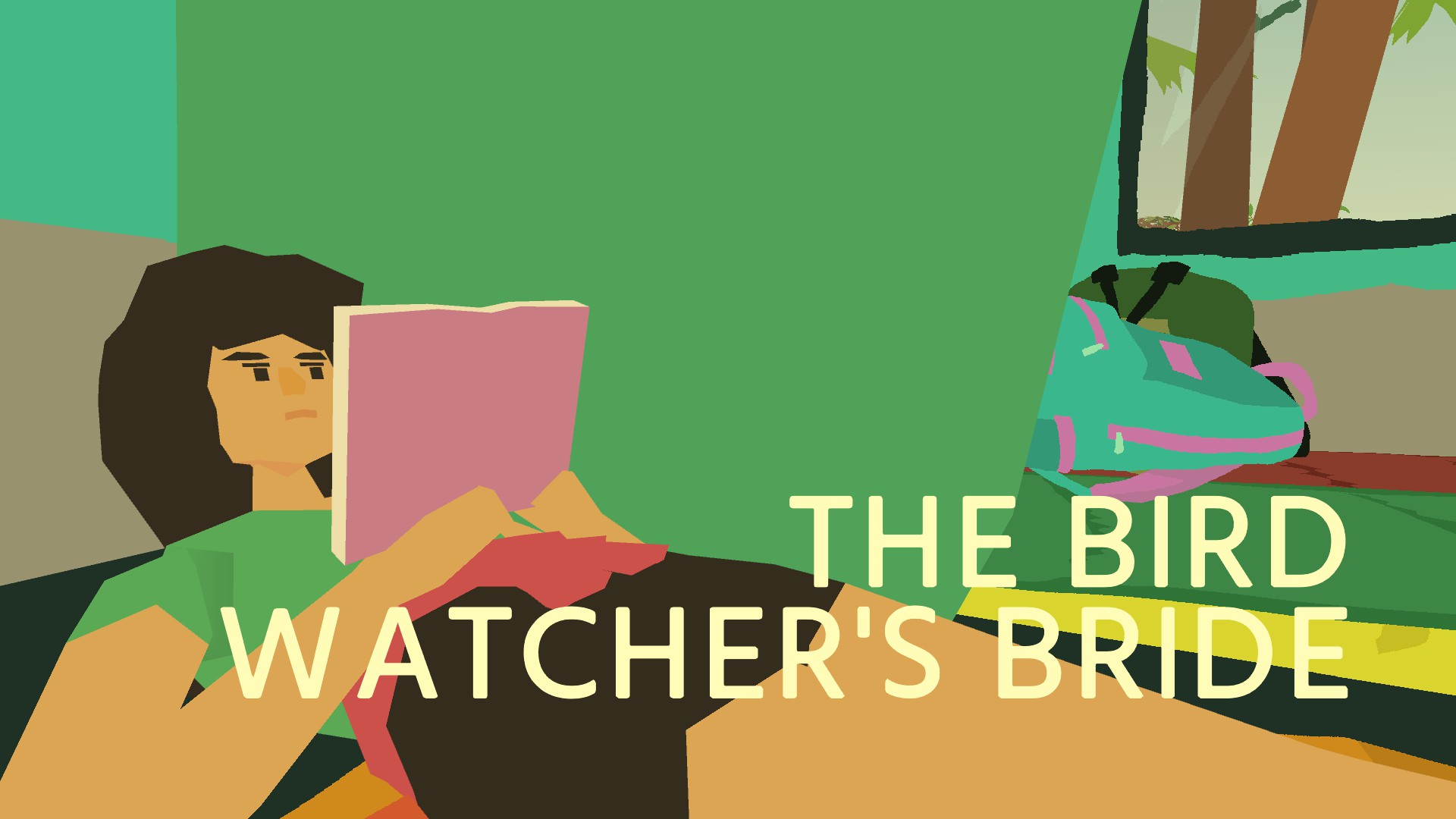 The little details of Wide Ocean Big Jacket also stand out. The color palette is striking, but there is also the sound design. The sound of the road, the ocean waves lapping against the shore, or the zipper of a tent, these sounds seem to pop. When characters speak they each get their own little chime, which just adds onto the charm. This is a very cinematic game with a strong sense of art style. 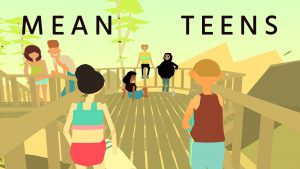 Outside of film influences, it is easy to find WOBJ’s kinfolk in games like Virginia, though this game foregoes the lack of dialogue. A low poly style with careful color choice is shared among them, but WOBJ opts for a more lighthearted look as it isn’t dealing with murder and mystery like Virgina. They all make interesting animation cuts between interaction or dialogue: for example, a character might sit happily with a bottle in his hand, but after another character makes fun of him, the scene changes to him slouching and sad. These jump cuts don’t quite match the erraticism of Goddard, but they do give the game a good sense of pace and playfulness. This humor bleeds into the bold title font that prompts the player, such as when Mord tries to go to the bathroom. 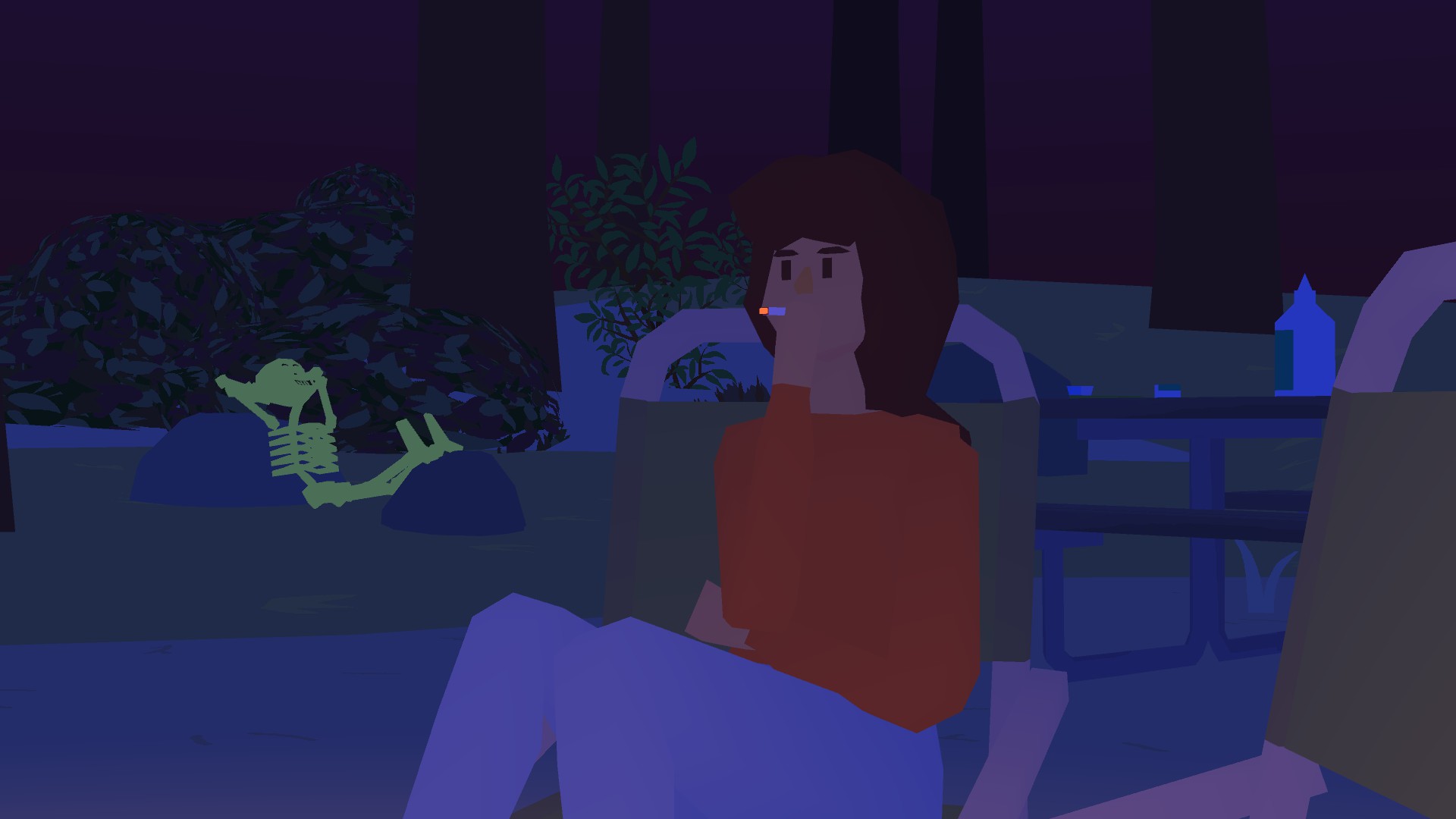 It’s not the size of the jacket that matters really

As a walking simulator, there are only some moments of interaction. You make a few choices that result in slightly different dialogue playing, there is a small quest to pee in a bush that you can opt-out of (you coward), and you can wander around freely in a scene, though these scenes are contained quite closely. There is a nice serene moment of watching the moon on the beach or birdwatching with optional commentary through button prompt. It’s all minimal with no lose condition. 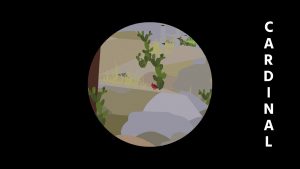 WOBJ is meant to be played in full. The brief time the player spends on the camping trip is not meant to linger: the pivot of the camera as characters exchange banter or tell a ghost story all feel special. Wide Ocean Big Jacket doesn’t waste a moment of its short playtime. If there is one criticism I have, it’s that you cannot replay dialogue or go back. This certainly fits the movement of speaking and life, but some lines deserve a second look. 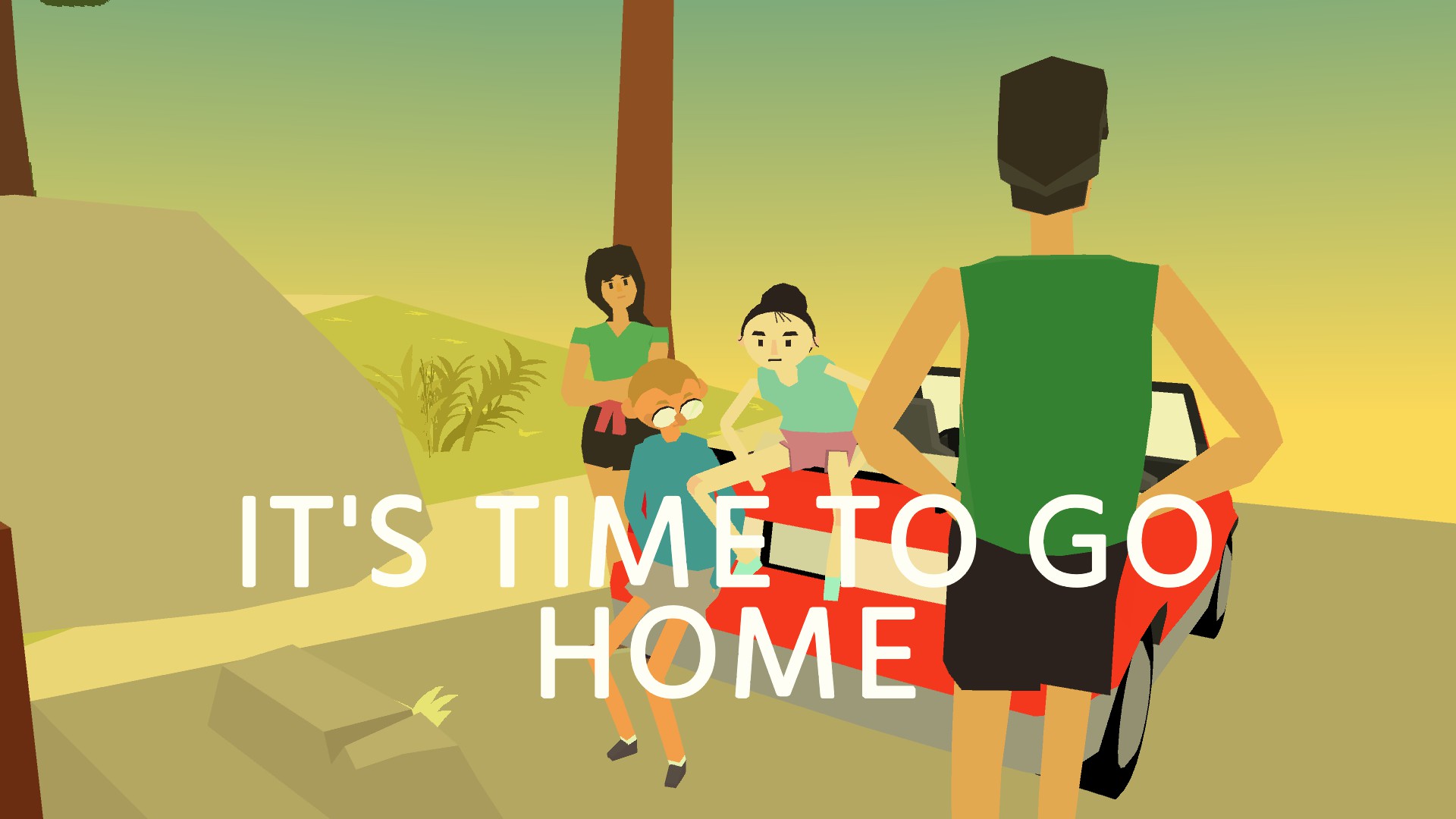 Wide Ocean Big Jacket is a short slice of life that is full of charm and heart. It feels like a movie I could easily share with friends or family to chat about. Some of the moments in the game are completely relatable, and a few parts feel quirky and entertaining. It’s wholesome, sweet, and playful. On nearly every front Wide Ocean Big Jacket feels like a special little game that I want to keep talking about, even long after the tents are all packed up.