Greetings, Reaper, and welcome to the job. You are to decide the fate of mankind, one profile at a time.

A new Grim Reaper recruit is here? Splendid! Welcome to your new job in an afterlife office! You are going to decide on who lives and who dies. You will do this by going through profiles of various people who are in dangerous situations, and based on their background and profession, you will decide who to save and who to end. Of course, there are also certain quotas to fulfil each day to keep the higher management happy, so don’t slip up, Reaper. You may begin your career as the judge of mankind!

The game revolves around only a handful of prominent characters. There’s you the Reaper, your somewhat snooty boss Fate, his mischievous cat Lady Pawdington, a cheerful pirate skeleton shopkeeper Mortimer, and your inner voice of doubt that you often talk to when looking in the mirror.

The people whose profiles we mark we don’t really get to meet, and so they aren’t prominent characters. However, the majority of them have something interesting going for them, based solely on their profile, and many of them do have an effect on the human world which we do not get to see directly.

So, why are we doing this job, you may ask? Are we trying to keep the world in order or are we just there to be a cog in a tightly-controlled bureaucratic machine? You will likely be asking this question as you find out more and more about the setting of the game and your role within it. 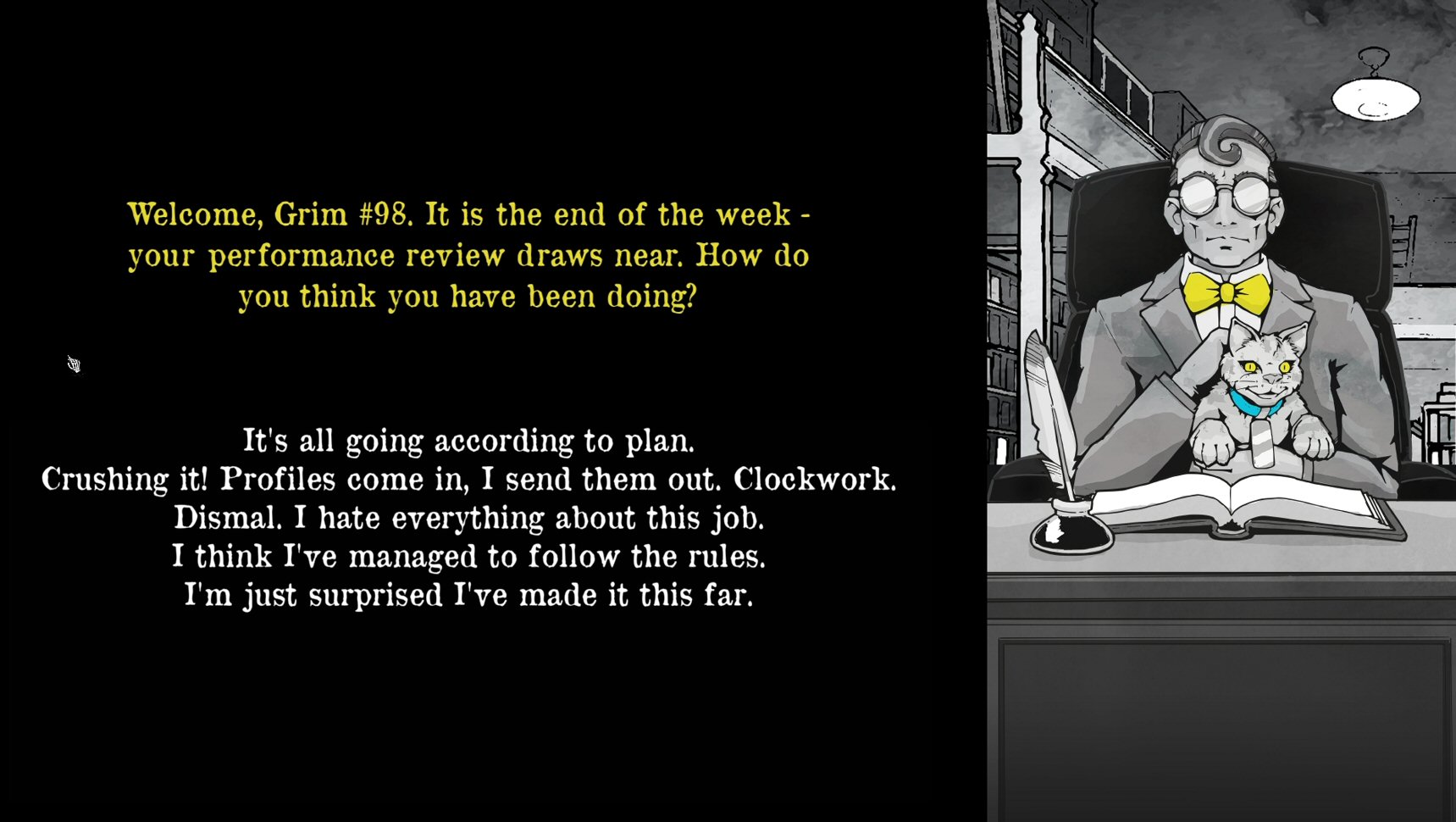 So, our job is to mark profiles – either to doom them to death or to keep them alive. Seems simple enough on the surface, but has a lot more depth when we look more into it. First of all, the management gives us certain quotas, such as to make a certain number of people die each day or to have people of specific professions die. These quotas we can choose to follow to a tee or not at all, but each time we deviate even a bit, we get reprimanded by our boss and get no pay for that day’s work, and if we mess up too many times, we can even get fired. 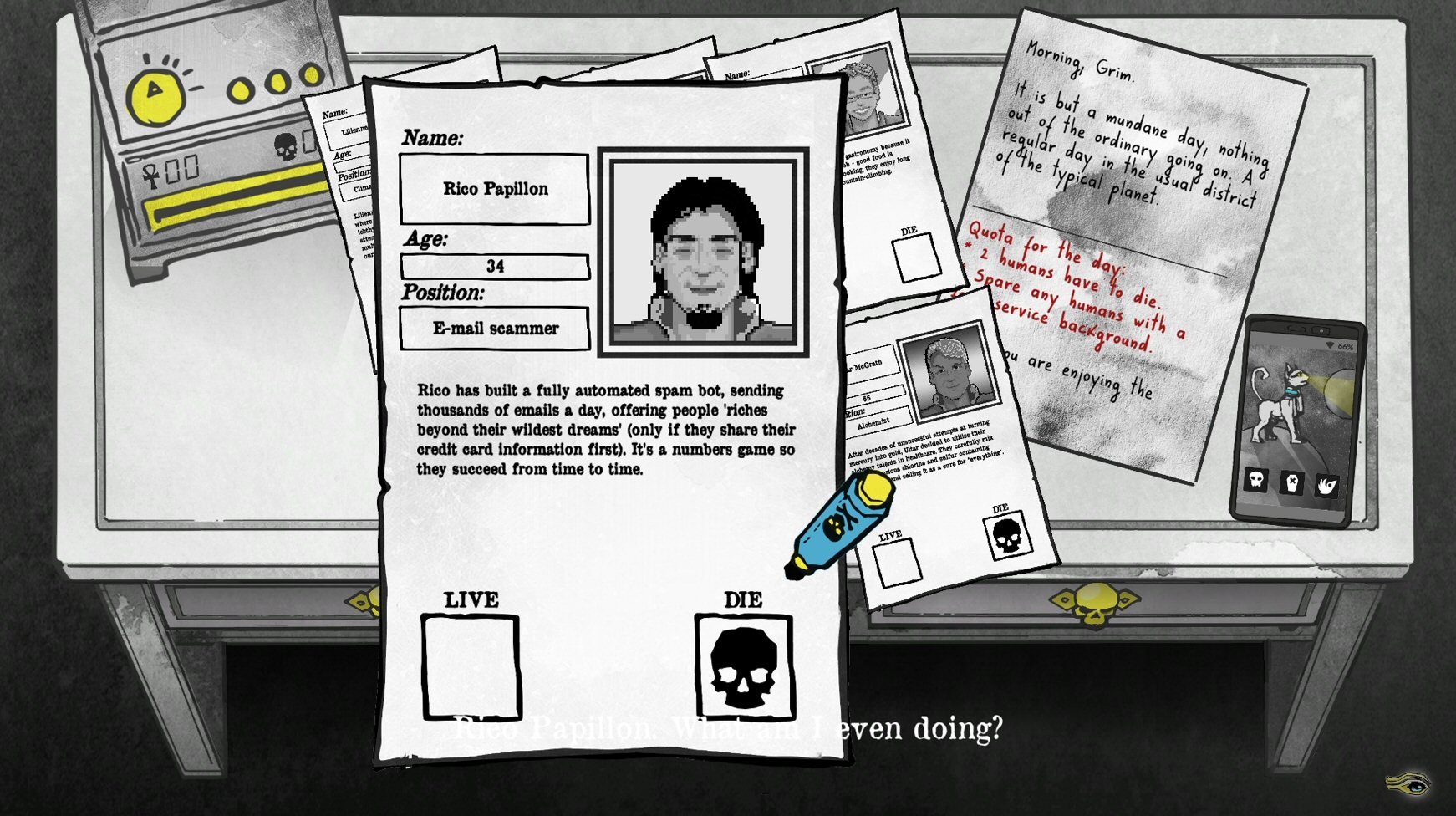 Another aspect we have to consider is the effect our choices have on the human world. We get a glimpse of those when reading news on the phone each day, which mention something about the people we’ve doomed or kept alive from the previous day. This, however, doesn’t tell us everything, and in fact the human world has several attributes such as economy, environment, and others, which get affected by all our choices. Some people’s existence or death will only have a small effect on those attributes, while others’ will have a very big one.
So, this is also something we have to consider when deciding the fate of each person. In that sense, there’s a great deal of choice and consequence in the game, and even though we might not see the effects of our choices right away, they can easily mount up later on. 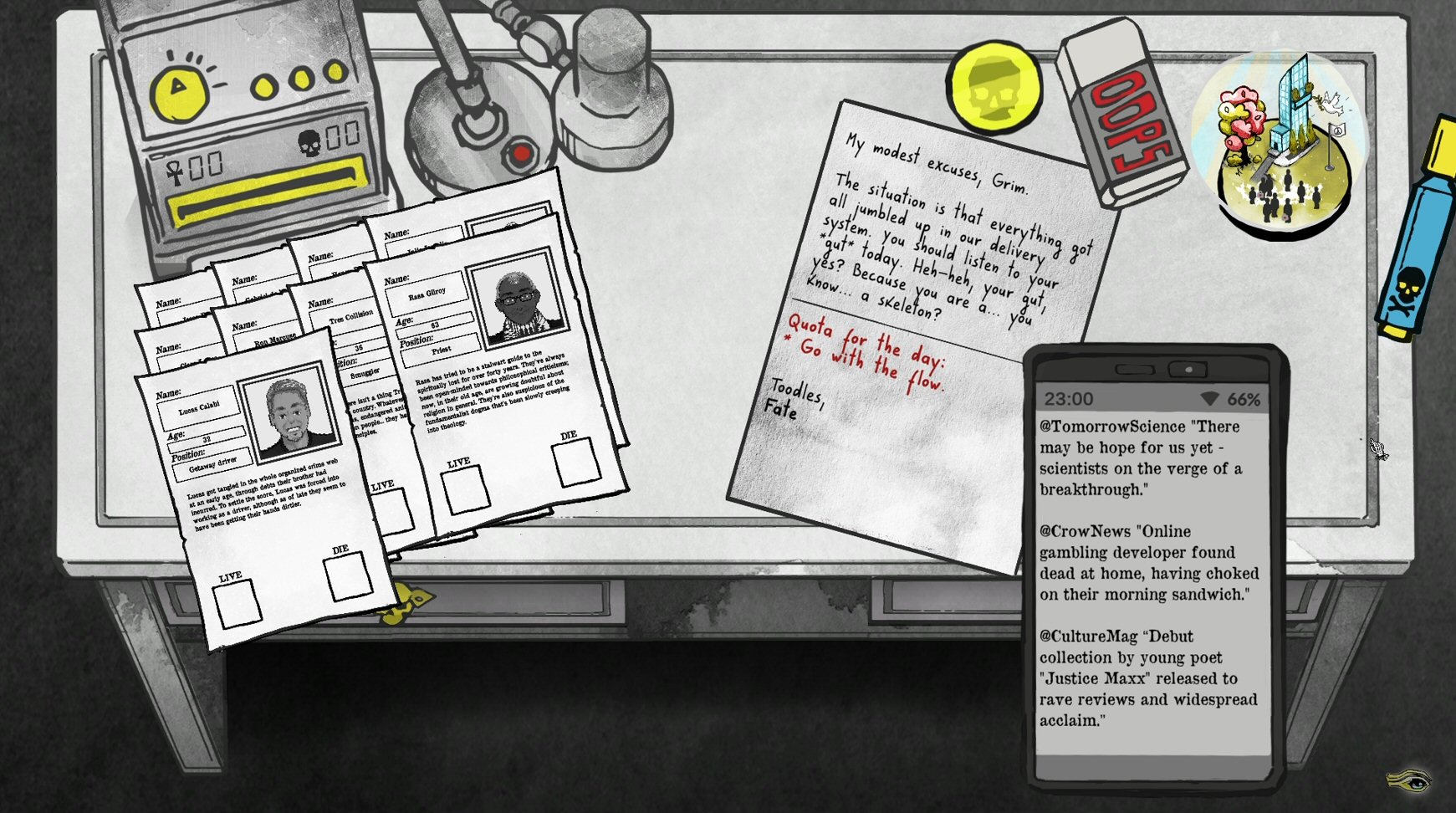 The game takes place entirely within the corporate building – we work, sleep, and shop there. There is only one shop, which sells various items. Some of those items are purely for cosmetic purposes, such as to open up more options to customize our character’s look, while other items can be used as tools to help us when marking profiles. Some of those items can provide us with more information on the effects of our choices, which can be very useful, especially when replaying the game. 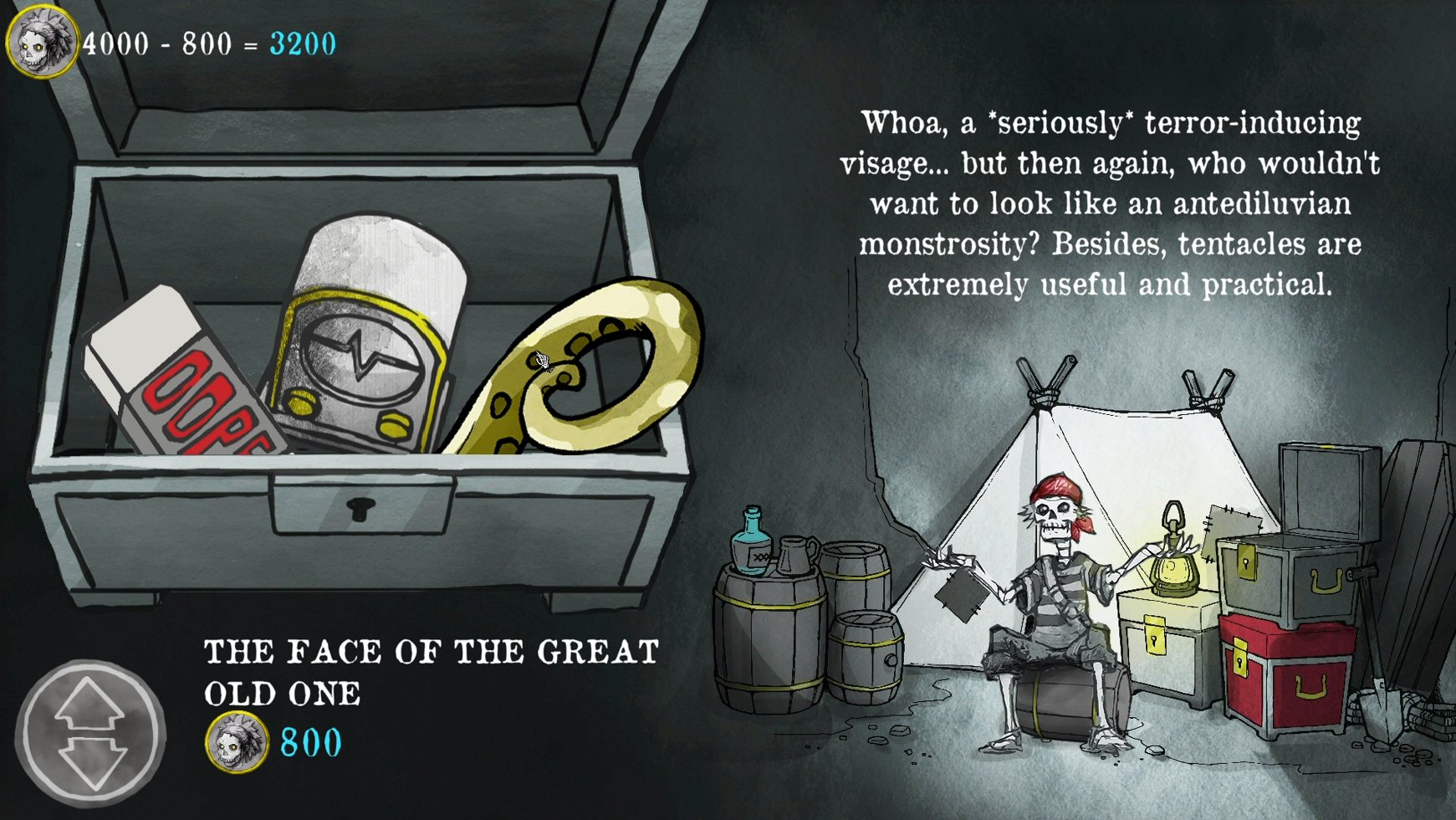 What’s really great is that parts of the game’s story do adapt to our choices. Although many of the profiles we get to judge will be the same from playthrough to playthrough, but which ones we get each day will vary drastically, and some will only appear if certain choices have been done. For example, if you’ve really messed up the environment attribute and the world is heading towards a severe global warming, you’ll come across profiles of some radical climate activists trying to do extreme actions in the world, or if you’ve allowed some disease outbreak to happen, you’ll get some profiles which have something to do with it appear on the next day or two.

Some of the human profiles can be pretty obvious in who they are, while others can have effects that can be a bit hard to predict or they might have positive effects on some attributes and negative on others. A small handful of them I even found somewhat unintuitive – for example, one guy who the profile says works to help children with special needs and takes care of his cats in spare time somehow has a negative impact on the environment if you keep him alive, which doesn’t make sense to me.

All in all, the more we become familiar with the game’s mechanics, the more satisfying the game becomes and the more we realise how tricky it can be to get a good outcome from all our choices, because little mistakes can accumulate, and big mistakes can end a good streak in an instant. So, we’re then encouraged to make the best use of anything at our disposal, and that feels rewarding when we finally do get the outcome we wanted. 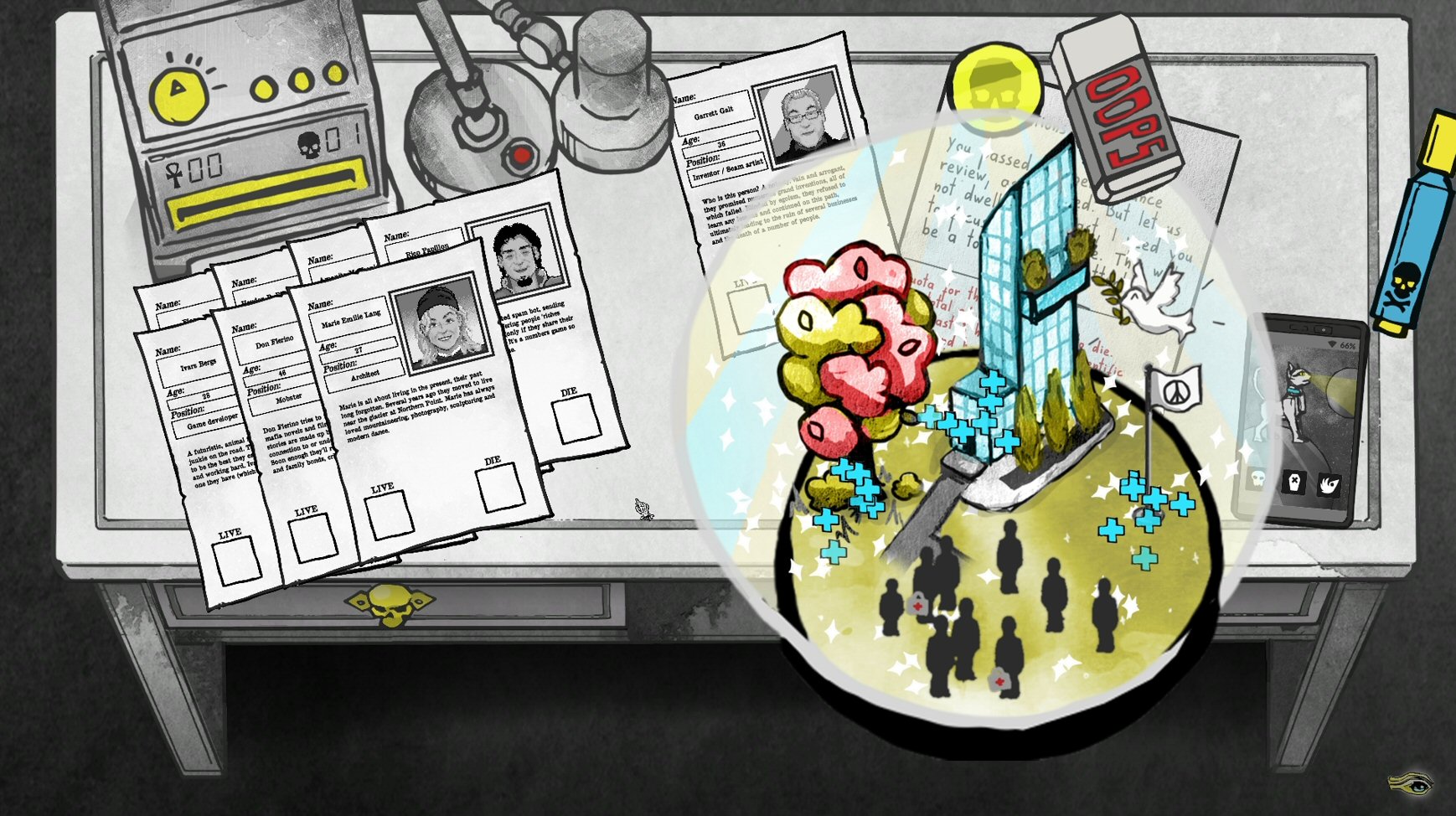 Lastly to say, there is a New Game+ option here as well. When we complete a single run through the game, which doesn’t take awfully long, we can keep all our items and go to the next playthrough, now ready to tackle the hard choices with more tools at our disposal. And as a bonus, what’s great is that the playable character is well aware that they’re doing the whole thing again and has new dialogue options to say in conversations, which I thought was pretty great and made New Game+ worth playing.

The game has a rather charming and unique visual style, somewhat akin to comic books and old cartoons. The colours it has for each part of the environment, character, and item are all carefully chosen. Most of the visuals are still images, but they’re all used rather creatively and create immersion.

We are able to choose the look of our Reaper character by cycling through preset faces and costumes. At the beginning, we don’t have many choices, but throughout the game we can buy thematic faces and costumes with in-game money. There are several different themes available, such as Corporate, Ancient Egyptian, Plague Doctor, Dia de los Muertos, and so on. 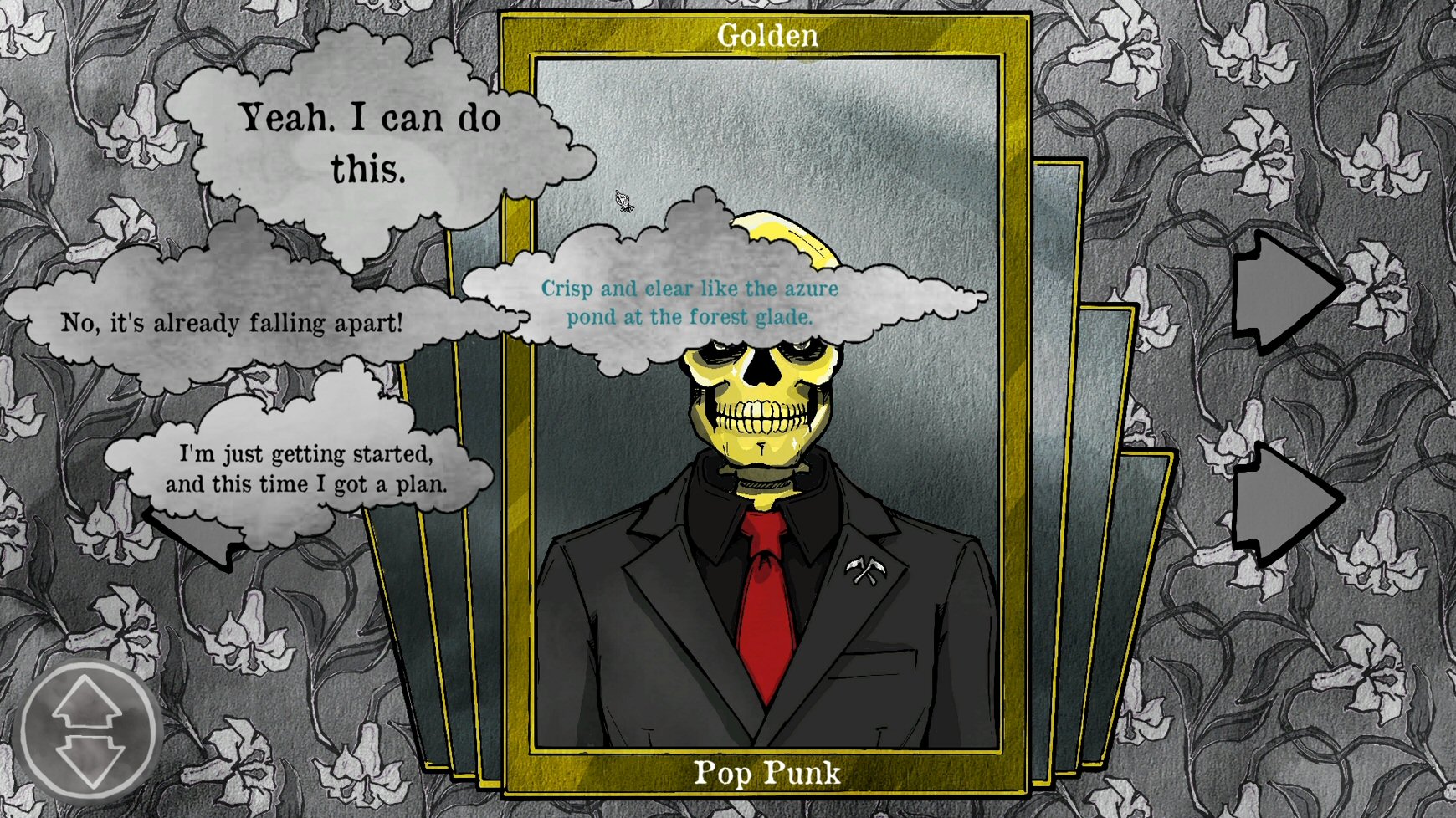 The music is really catchy in the game and is enjoyable to listen to in every area. Most of it has a sort of relaxing jazzy blues feel to it and really fits the posh corporate afterlife.

The sound effects and the voice acting are also top-notch and do a great job at making every aspect of the game fun and immersive.

The overall tone in the game is quite funny and entertaining. The profiles of each person and the news headlines are all fun to read, and some will even make you chuckle.

Most of the game is controlled with a mouse. We use it to pick up and move items around the desk and to use the pen to mark each profile with either life or death. It’s quite simple and intuitive to use, although at times the work desk can feel a little cluttered with too many things. The elevator in the building can also feel a bit awkward to control as it seems to go the opposite way to where you’re pointing your mouse. These are only very minor criticisms, however.

The dev has been very responsive to feedback and fixing any bugs and issues that I’ve reported. So, it is obvious that a lot of love was put into this game to make it as best as it can be. 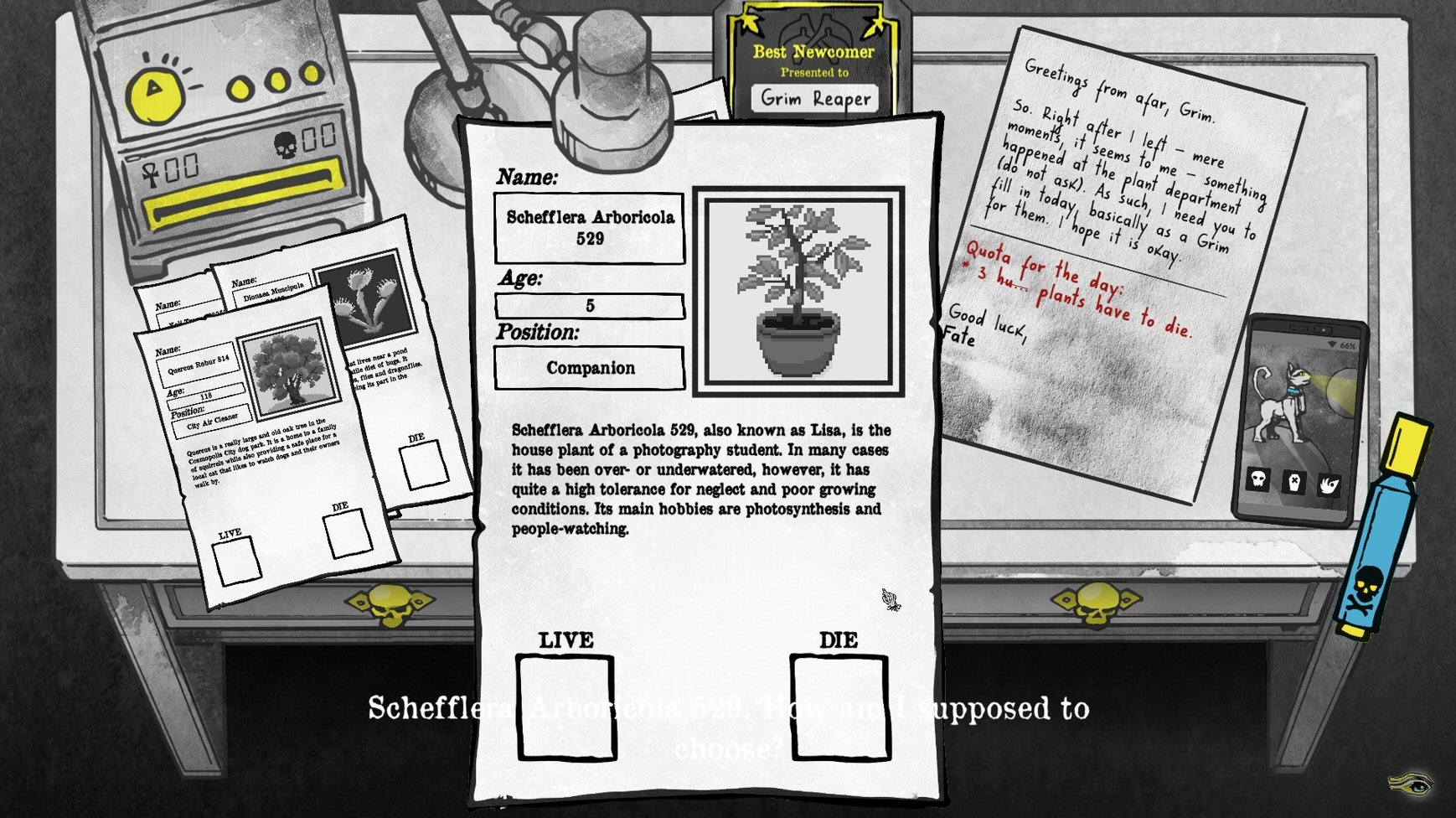 ‘Death and Taxes’ has a personality of its own and is therefore pretty engaging and unique. It’s well worth playing if games of this type interest you, especially if, like me, you have a soft spot for when choices have an impact on the outcomes. It’s a nice, relaxing game that lets you take time and think through your decisions and to see the effects of those decisions, first as news headlines on the phone, and later as the global effects on the whole world.

The game manages to have a humourous tone, even though it does handle topics such as death and worldly problems. In some parts it does not take itself seriously and can even throw in something unusual your way so to keep the experience fresh. You’ll come across some references to the real world and pop culture from time to time too.

Sure, this game is easily not for everyone’s taste, but it has a clear formula and it executed that formula incredibly well, making sure to give attention to every aspect of it. Each playthrough might not be very long, but the game is very replayable, and I’ve found myself having replayed it a few times already. I think it would be even better if the devs add more content to the game in the future, perhaps as DLCs with interesting side stories that happen in this interesting world.

I don’t give the ‘Autosave’ score lightly, and of course there are some drawbacks and limitations of this game, but every game has those, including those I deem to be my favourite games, so given that, I think ‘Death and Taxes’ stands pretty high in managing to accomplish what it set out to do and providing plenty of immersion and enjoyment.