Time to put on my empathy shoes.

First, there was darkness. Then suddenly the raspy voices of your ancient brain and limbic system chimes in to keep you company. Letting you slowly regain the ability to sense your body before a piercing sound is heard. Waking you up to reveal that you’re wearing nothing but your underwear and socks. Looking around, you see the only thing accompanying you is an ungodly hangover and a trashed room. Not even your memories want to hang out with you now. Leaving you with no idea of who you are, where you’re at, or why you’re here. At least you know that you must have drank your bodyweight in beer and listened to that small part of your brain that demanded you to throw your clothes around. 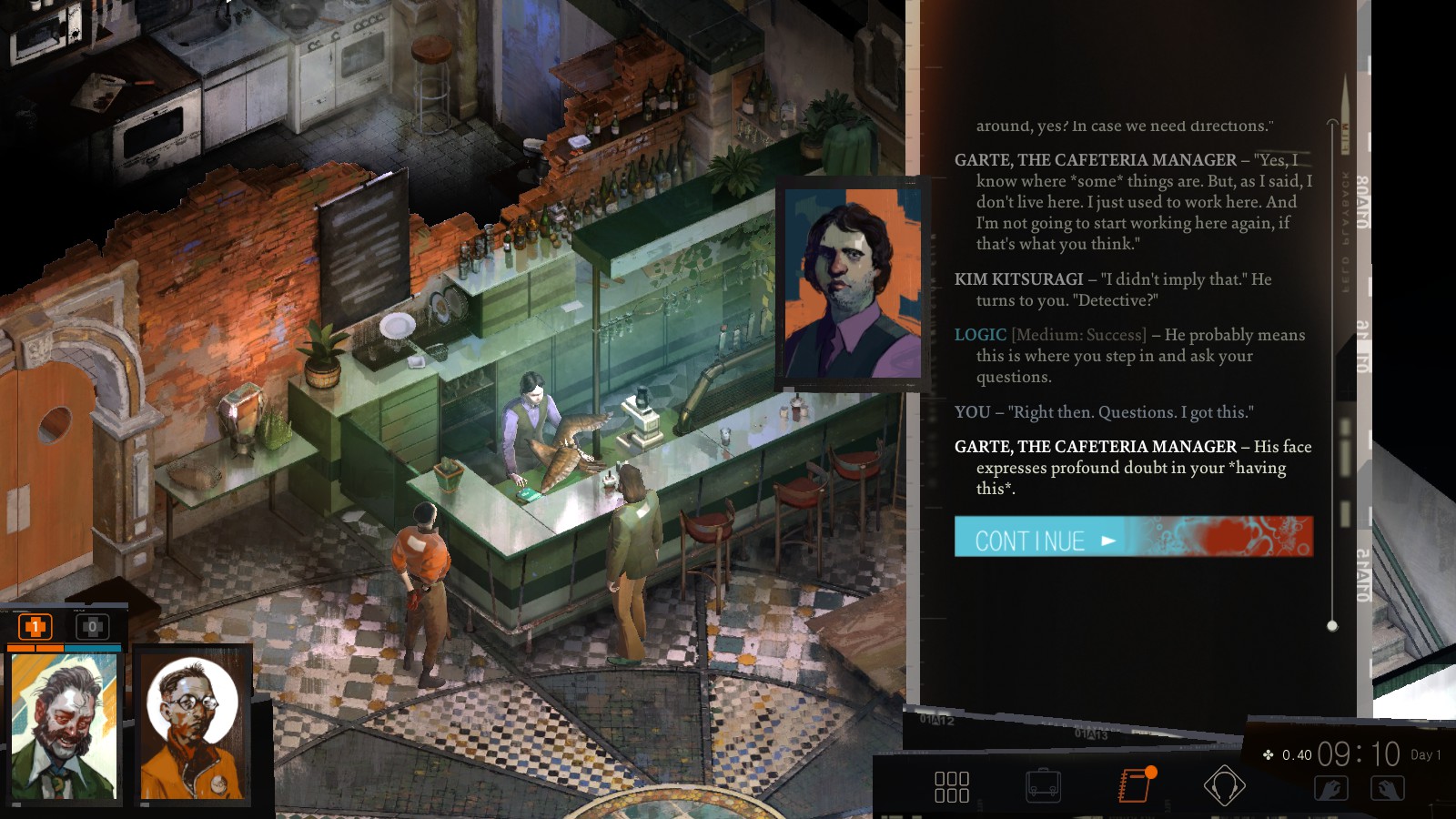 It doesn’t take long to gather where you’re at and why. You’re at Revachol and it turns out that you’re an officer or, more accurately, a detective sent to investigate a murder. You see, a call came in about a hanging behind the Whirling-in-Rags hostel and you, being the best detective there is, left him hanging for about a week. Not even bothering to take him down before you went on a bender that lasted the whole weekend. Well, at least you’re not alone anymore. You’re partner, Kim Kitsuragi, has arrived and ready to get on with the investigation. Wait… shouldn’t you have a badge? Okay, don’t panic. Not only do you not know who you are, but you lost the very things that shouldn’t have: your ledger, badge, and gun. Hopefully you’ll come across them as you rediscover yourself and try to piece together the mystery of who murdered this man. 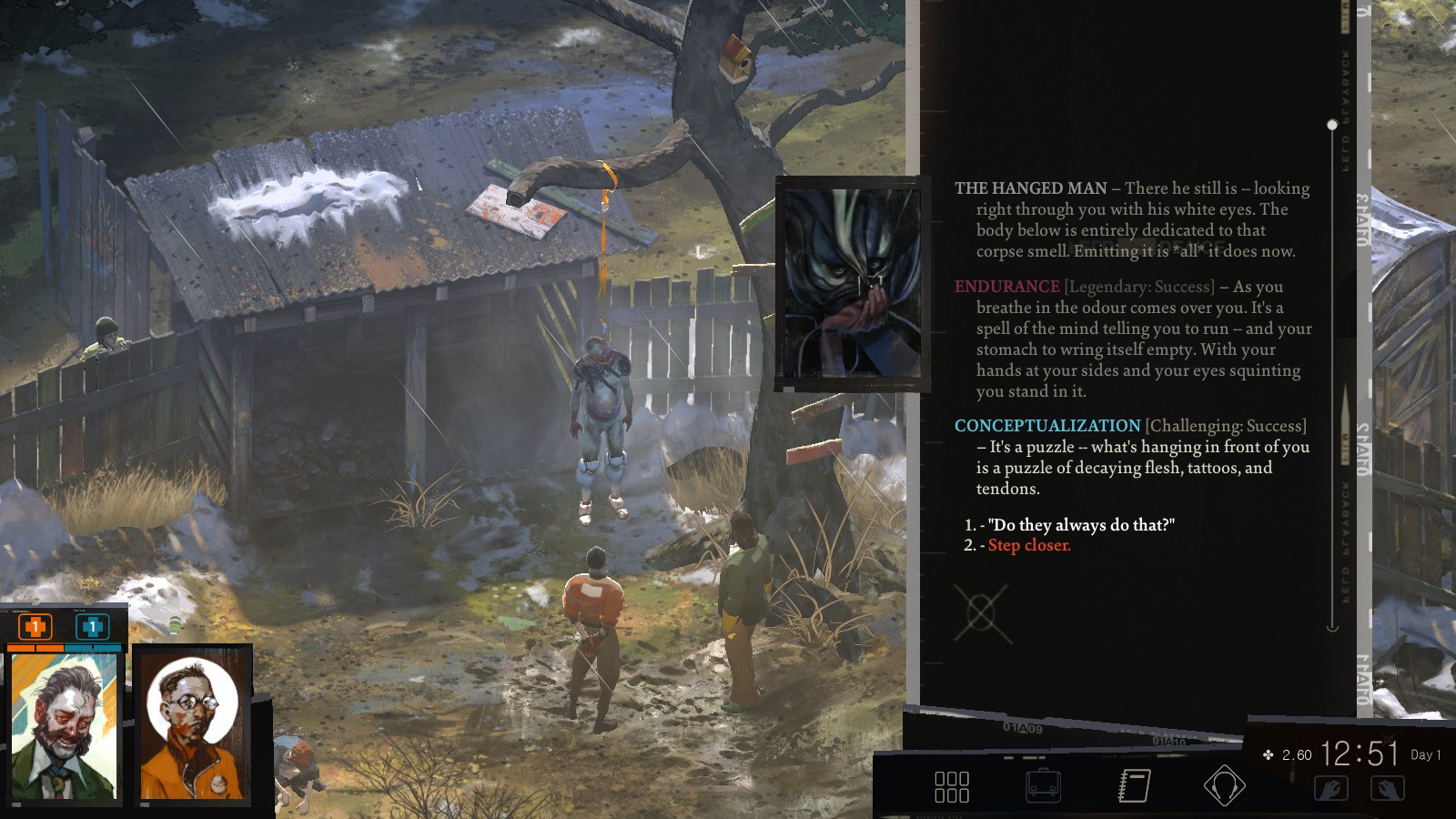 Before you start, you must first choose what archetype you want to be. Depending on which one you choose, the amount of points between your stat categories (Intellect, Psyche, Physique, and Motorics) will differ. Do you want to be the Thinker, who’s going to be intelligent but bad with people; the Sensitive, letting you be psychological but can easily lose your mind; the Physical, who will interact through his body but dumb; or you can create your own character and distribute the points however you want. In addition, each archetype has a signature skill. So how important is selecting your archetype really is? Well, it’s everything. 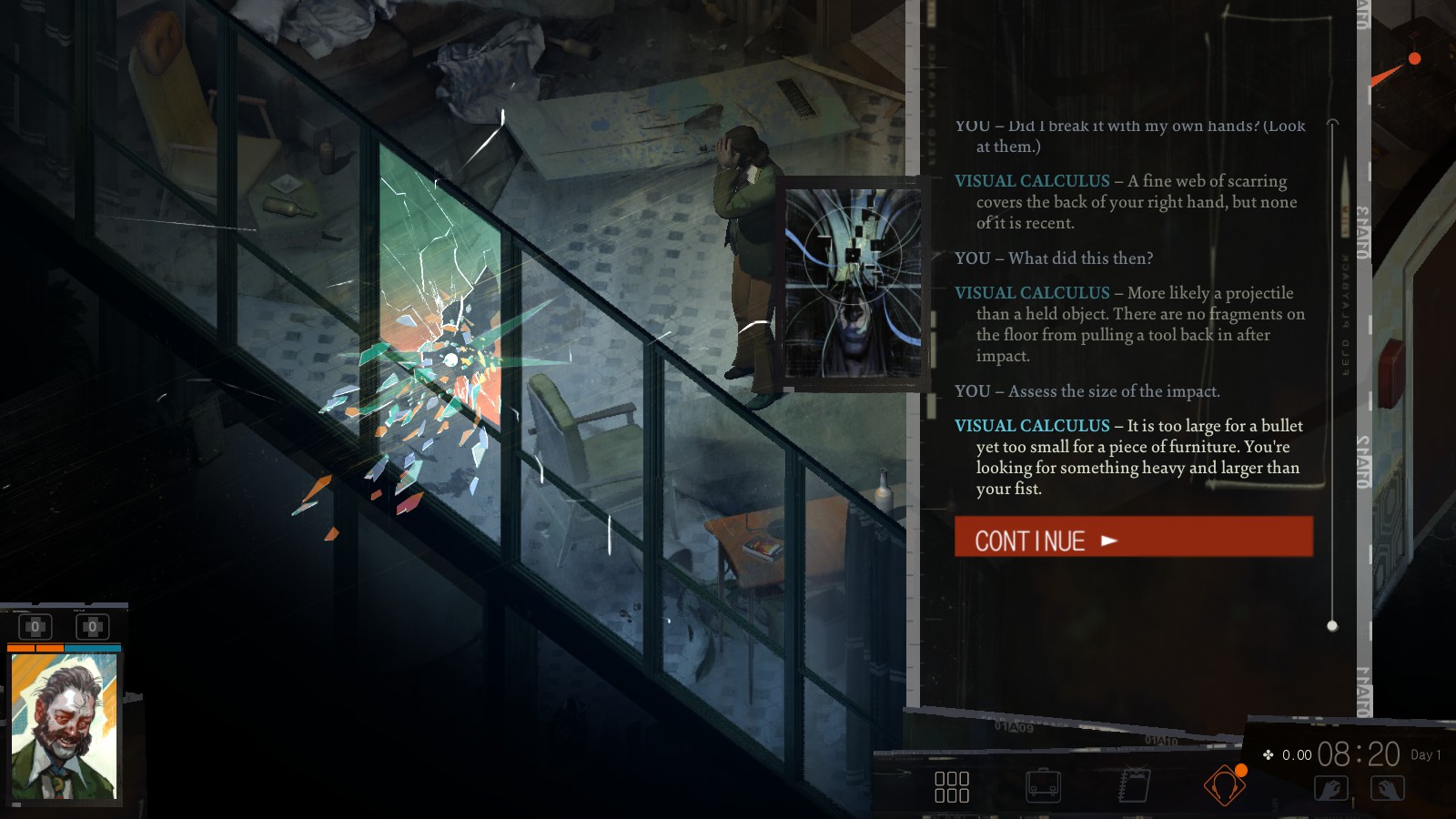 First, your skills will obviously attribute to skill checks. The more points in a skill, the more likely you’ll be able to pass it. During conversations or looking at objects, you’ll come across white and red skill checks. White skill checks let you retry it if you failed the first time. They’ll be locked, but can easily be unlocked if you add another point to that particular skill or something else unlocked checks of that category. In contrast, red checks can’t be retried so if you failed, you have to live with what happens. Not only that, but there are passive checks. Depending on how many points a skill has, they will chime in during conversations giving their two cents. Even sometimes giving you a new dialogue choice. Sometimes, they’ll even interact with each other. If you’re the Thinker, you’ll have Encyclopedia telling you facts, Drama able to tell you if someone is lying or not, and Visual Calculus letting you visualize what happened to that wrecked fence. While the Sensitive can look beyond for conversations with Inland Empire, have Empathy for others, and Shivers will let you talk with the wind. However, you should be careful with how many points you put in these skills. It’s useful, but having them at high levels have downsides. Like Encyclopedia won’t hold back useless facts. 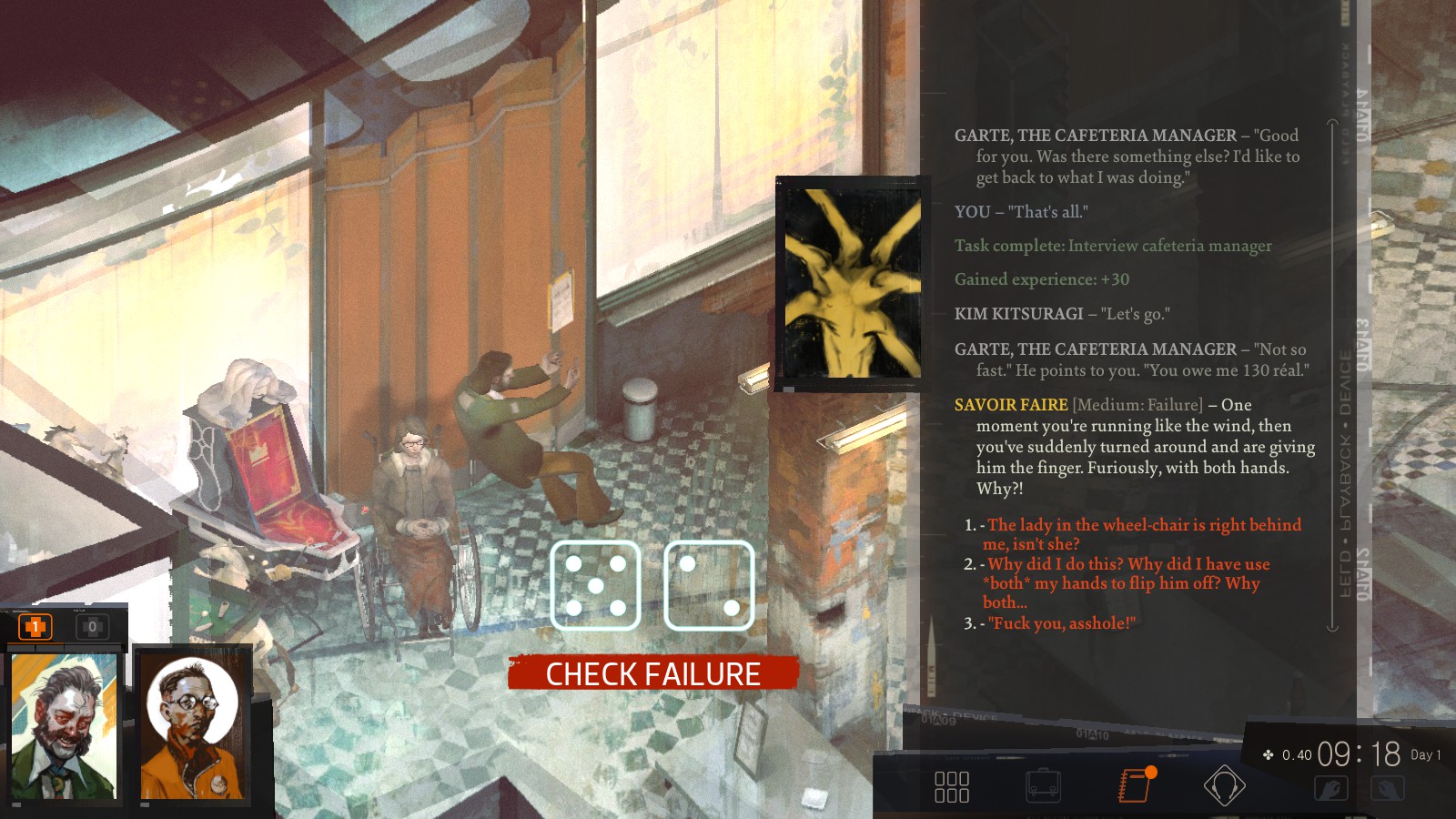 So how can you raise your skills? Well, first is experience that is rewarded when you learn something new during conversations or completing tasks. You’ll get a lot of tasks during your time with Disco Elysium, whether they are related to the murder or not. Although, some of the tasks won’t be able to be completed right away as not all locations are unlocked on day one. Despite having a lot to do when including exploring all the areas for items and characters, it’s not to the point where you’ll feel overwhelmed all the time. All your tasks are listed in your notebook and it’s easy to pinpoint which one you want to do or able to do. Each task varies in how much experience you’ll get, but you’ll quickly level up this way.

This is also the perfect time to mention the passage of time. With so much to do, you must be pressed for time right? Nope! Time only passes when you’re talking to someone (or to your skills). Letting you explore without having to worry. It also must be said that there really isn’t a time limit, or at least there’s a perfect amount of content so you won’t hit it unless you meant to. The most you get with time limits are tasks that can only happen during a certain time (like someone will only meet you after a certain time) and characters will start going to bed after 9pm. In fact, you might actually find yourself needing time to pass, and you can do this by reading books. 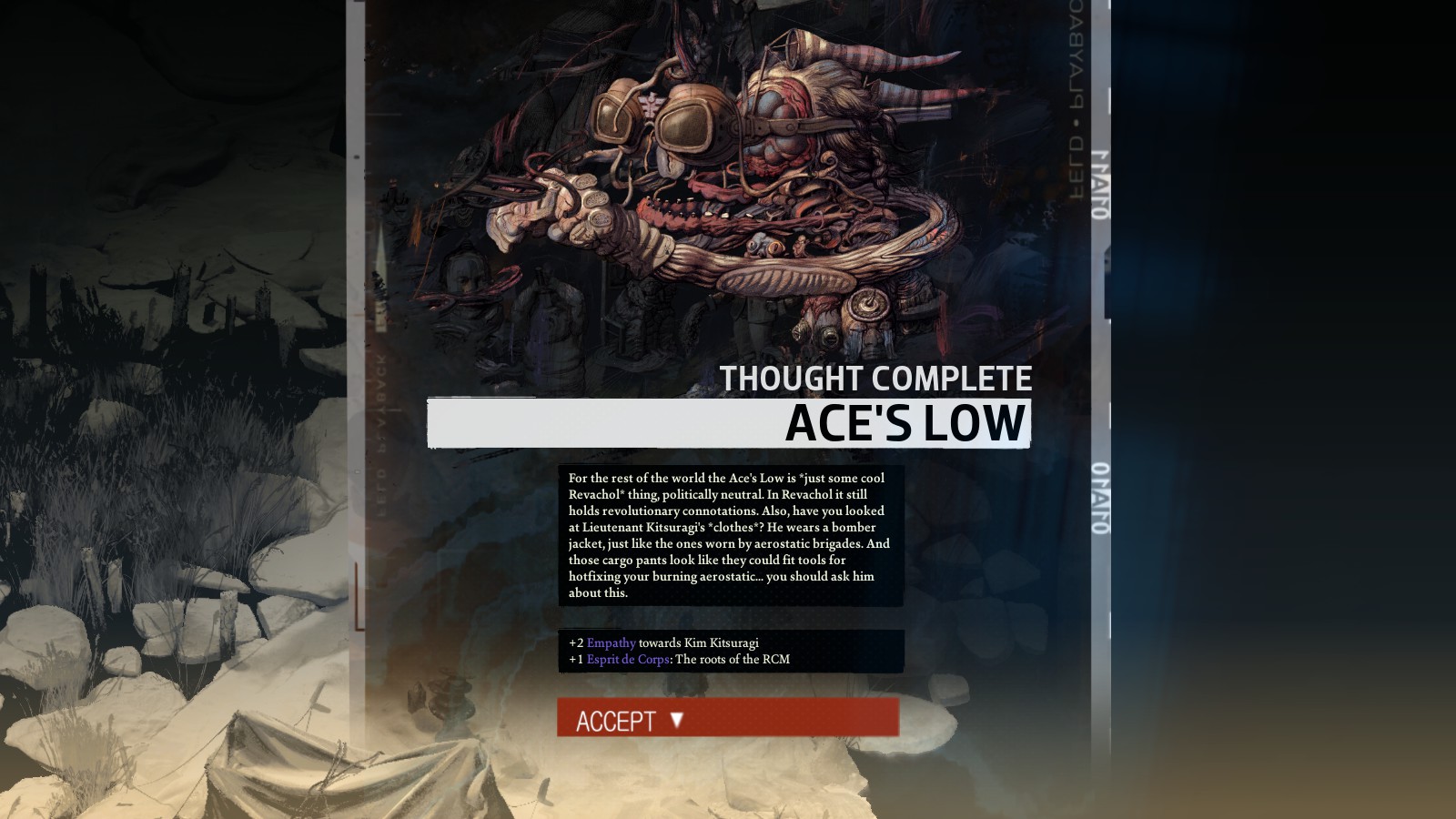 You can also temporarily buff skills with consumables like beer and speed, but it will also debuff other skills while still active. Similarly, certain clothes will boost skills and may debuff some in the progress. Lastly, are your thoughts. As you’re playing, you’ll occasionally get a thought due to your choices and it’ll be stored in your Thought Cabinet. You can then start to internalize that thought, assuming you have an open slot, and after a certain amount of time passes, you the thought will complete. Each thought will buff/debuff skills as you’re thinking about them and once internalized will reveal what the thought is about and the buff/debuff you’ll now have. You can forget thoughts, but it also requires you to spend a point. 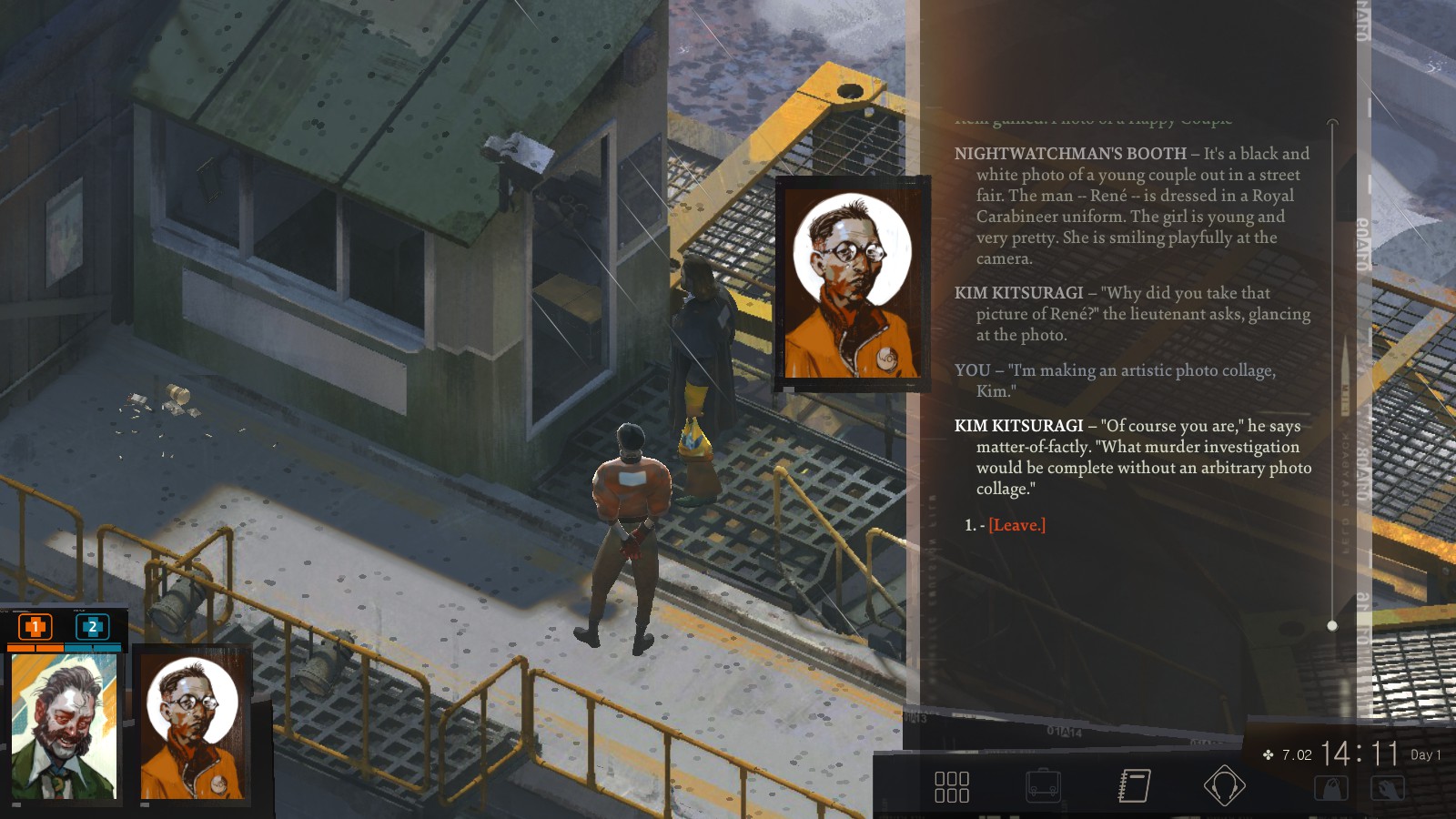 With a game that is so text heavy, it can make or break it. I can happily say that the writing is absolutely fantastic. Having many memorable characters (some not showing their real colors till you get to know them better) and able to touch upon many tough subjects like it’s easy. Even able to put in some humor that doesn’t take away from the atmosphere or go against a character’s personality. It also must be said how great of a partner Kim is. Despite what kind of character you play, Kim seems to be the perfect fit with him naturally being reserved and serious about solving the case. Urging you to not go off on mini-investigations (too late Kim). However, bits of his personality peaks out and it makes moments with Kim the best ones. You can have him go along with your plans and have him humor you, but his principles stay firm. If you have enough points in certain skills, they can also pop in to tell you what Kim really thinks or feels about you or what you did. It’s really easy to get attached to Kim and that’s good considering he is your partner. 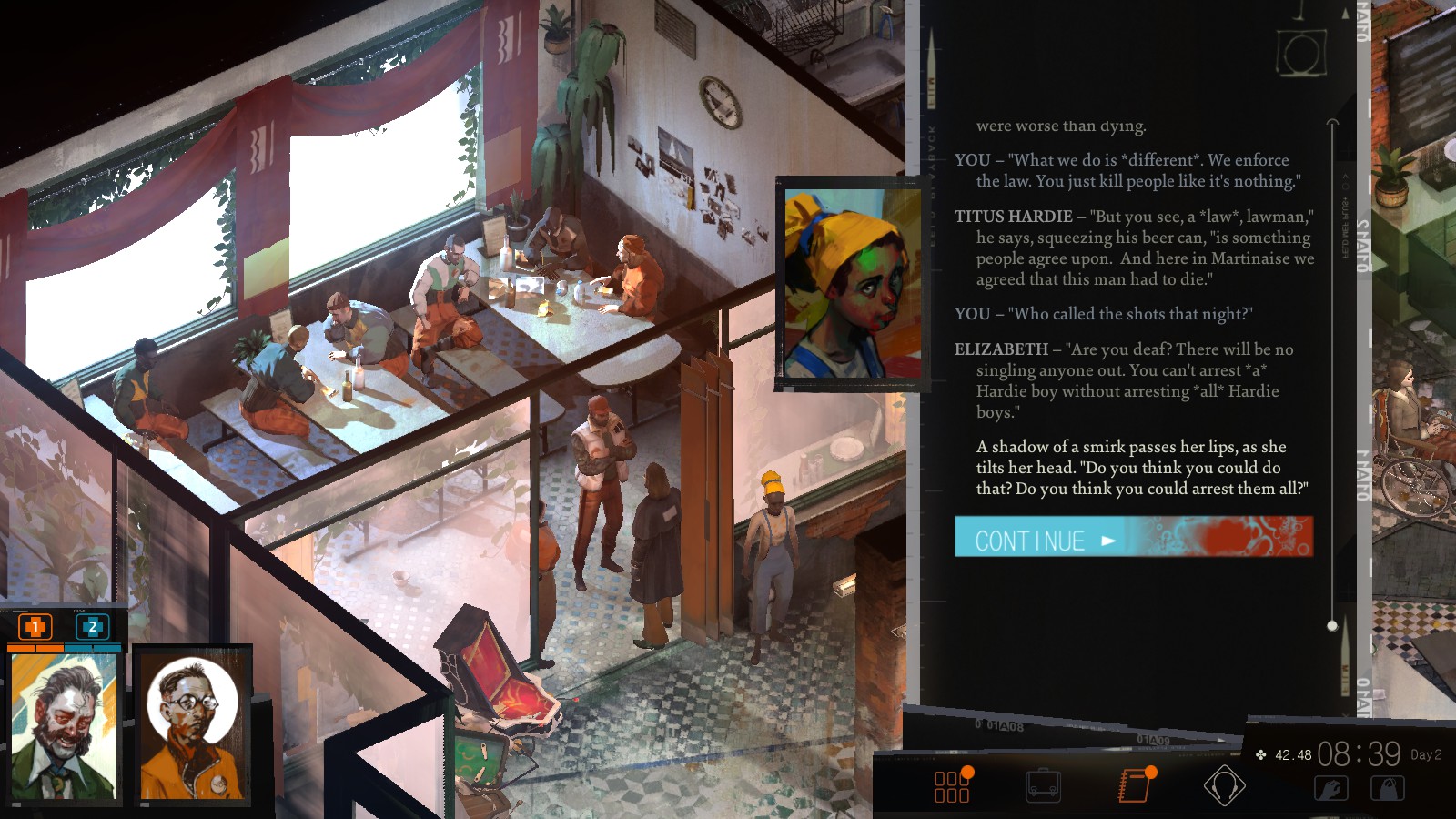 Disco Elysium is also partially voiced with each character at least having one voiced line so you get a feel for their voice. A lot of the voices are perfect matches. Like the raspy voices of your brain and especially Kim’s calming voice (I cannot express how much I love Kim’s voice and I wish he had more voice lines). However, this does vary as some will barely be audible over the music (which I get they’re soft spoken, but I want to hear their voice!) and some being lower quality than the others (which is really noticeable for characters that are meant to be screaming). 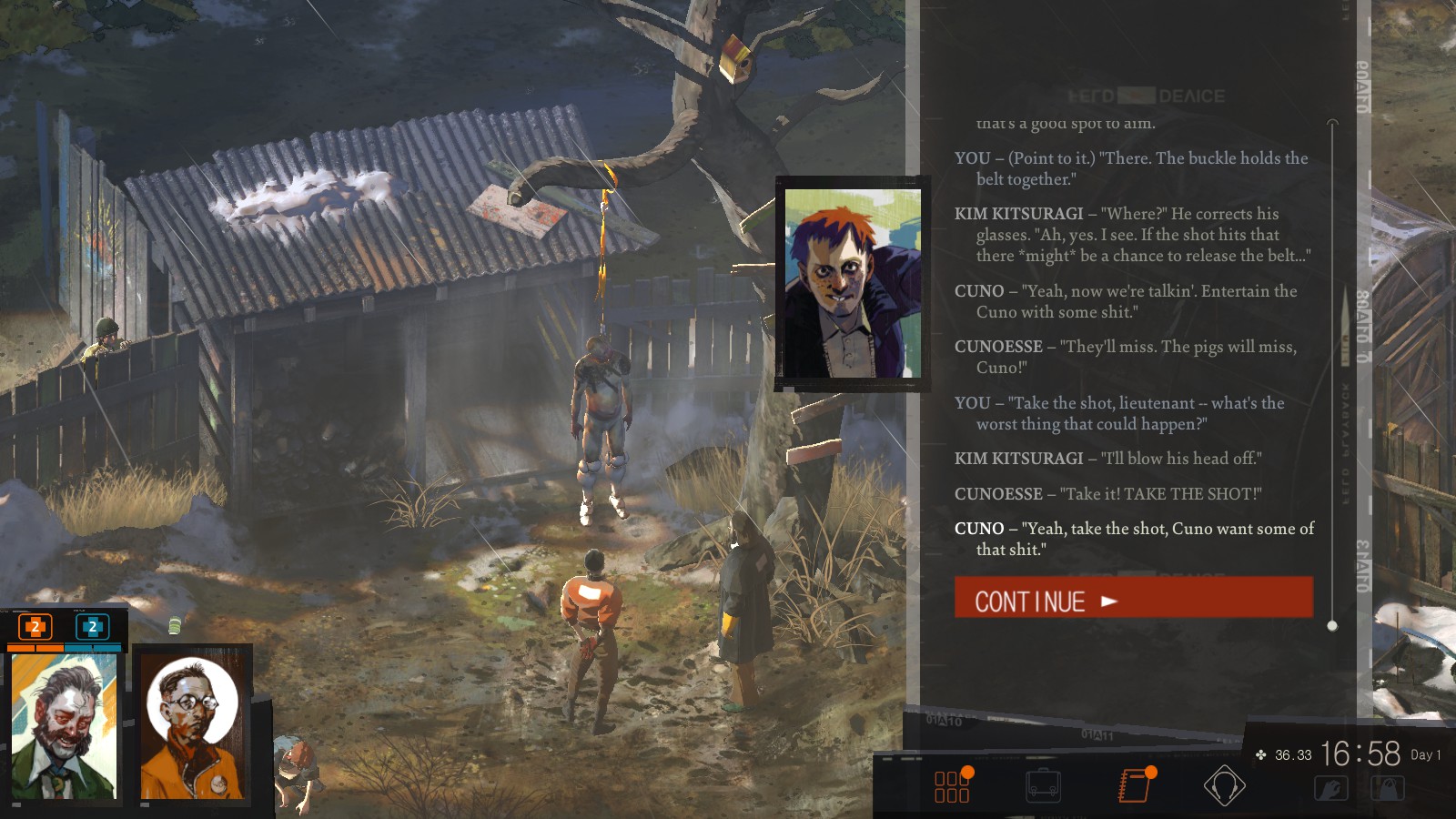 Apart from this, Disco Elysium does have some negatives, but it doesn’t affect the overall enjoyment much. There are still some bugs, a couple that I personally came across, but it does seem like they’re getting patched out. Or, I would assume so as there have been patches coming in since release, but there haven’t been any patch notes to look over. There’s also one particular word that is censored. I wouldn’t have normally mentioned this since having it starred out wasn’t jarring to me, but then I played more and a patch came in. Some lines with this particular word are voiced and the way they censored it was to overlay it with muffled static that’s louder than the dialogue being said. It’s jarring and horrible to hear. At that point, why not invent another word (since they do incorporate fictional racial slurs) or at least not have those lines voiced. After all, if they had the foresight of censoring it in the script, you would think that those lines wouldn’t have been voiced.

Lastly, I wish that we had an epilogue of sorts, even if we got a simple slideshow. I really want to know what happened to everyone after the game’s events as I did grow attached to all of them (even Cuno). Also, it would have been appreciated if they included a way to move without having to constantly click in situations where you’re going from one place to another for a task. 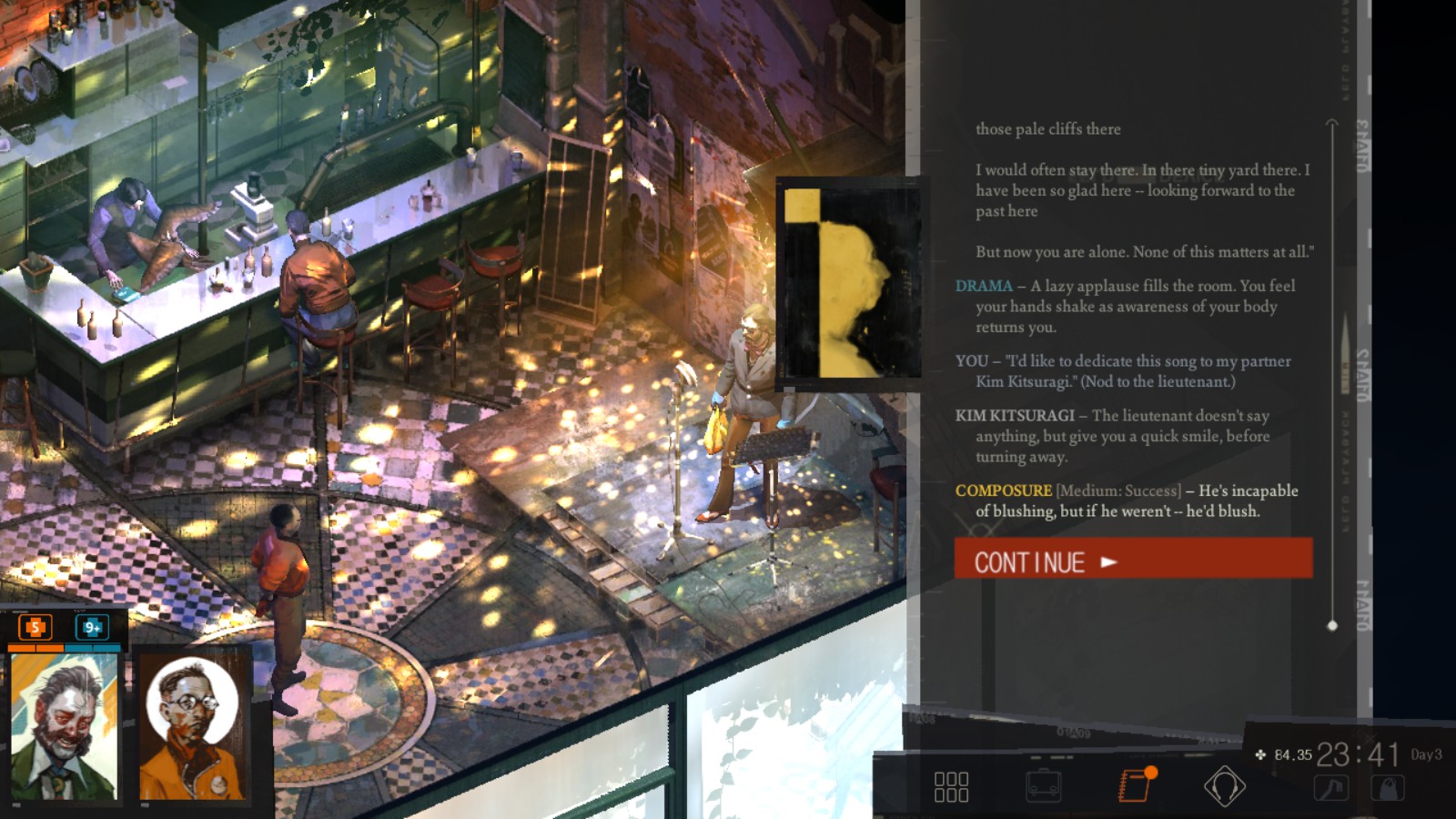 Disco Elysium easily made it to my top favorite games with its fantastic writing, how great Kim is as a partner, the interesting art style for both its world and character portraits, and how it incorporated your skills into the dialogue. While there are still bugs present, the censor sound is unpleasant, voice quality isn’t consistent, and the game isn’t as long as the developers say (it’s more ~35 hours than 60), it’s a definite must-play for those who love text-driven rpgs and detective stories with a touch of supernatural elements. And, if you don’t mind going through the story again, replaying with a different archetype is worth it.