A perfect job to hear all the drama.

After dropping off the latest passenger, you decide that it was high time to take a smoke break. However, just as you step towards a wall to lean against, a lurking figure makes themselves known. Before you can see more than a hint of a dead body, everything goes dark. Next thing you know, you’re staring up at a hospital’s ceiling. It turns out that you were in an induced coma due to being attacked by Paris’ new serial killer. Luckily for you, the serial killer wasn’t aiming to make you one of their newest victims as you’re the only one to survive the attack. A month goes by before you’re back to work, despite your wound still being open and that night still fresh on your mind. 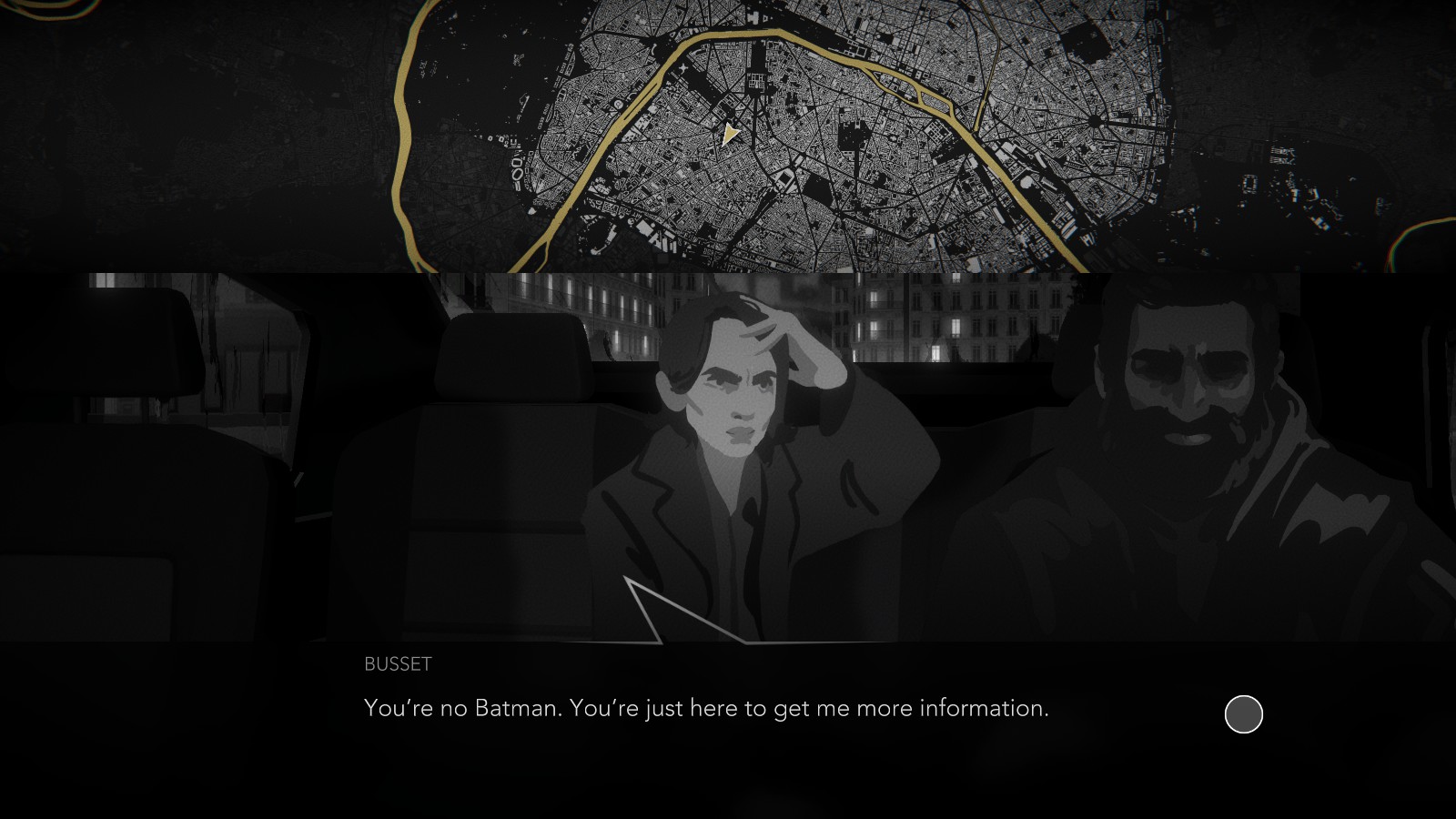 Before you can get truly get back into the swing of things, you’re confronted by a cop named Busset. She confesses that you’re one of the suspects to the case. In fact, the chief believes you’re the serial killer due to your past criminal history. Busset doesn’t believe you’re the one though. After all, why would you be hastily targeted? Oh, don’t even think you can go that easily. With everyone antsy to see the killer jailed, or at least dead, Busset is secretly enlisting you to help whether you like it or not. You have until the end of the week to find the killer or be the scapegoat. 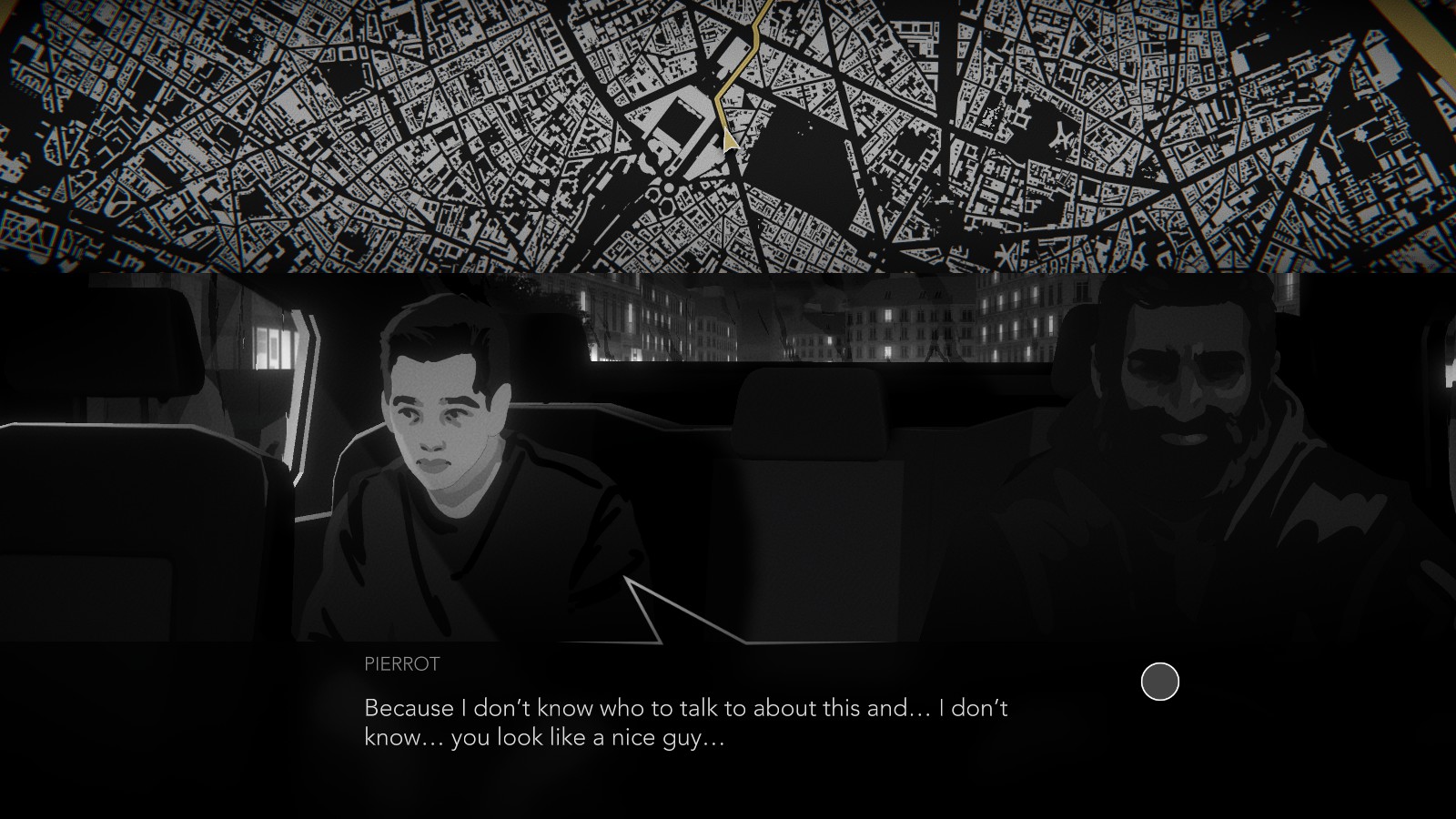 There are three available cases and all of them start this way. Of course, the weapon and the killer’s name switch up depending on which one you choose. The first one is The Judge, which is recommended for your first time as all the victims are connected and the motive is clear. Then there is The Angel of Death who has random victims, but an unknown motive. Lastly, there’s the Sandman case where the victims are seemingly random, but it all makes sense once you uncover the motive. 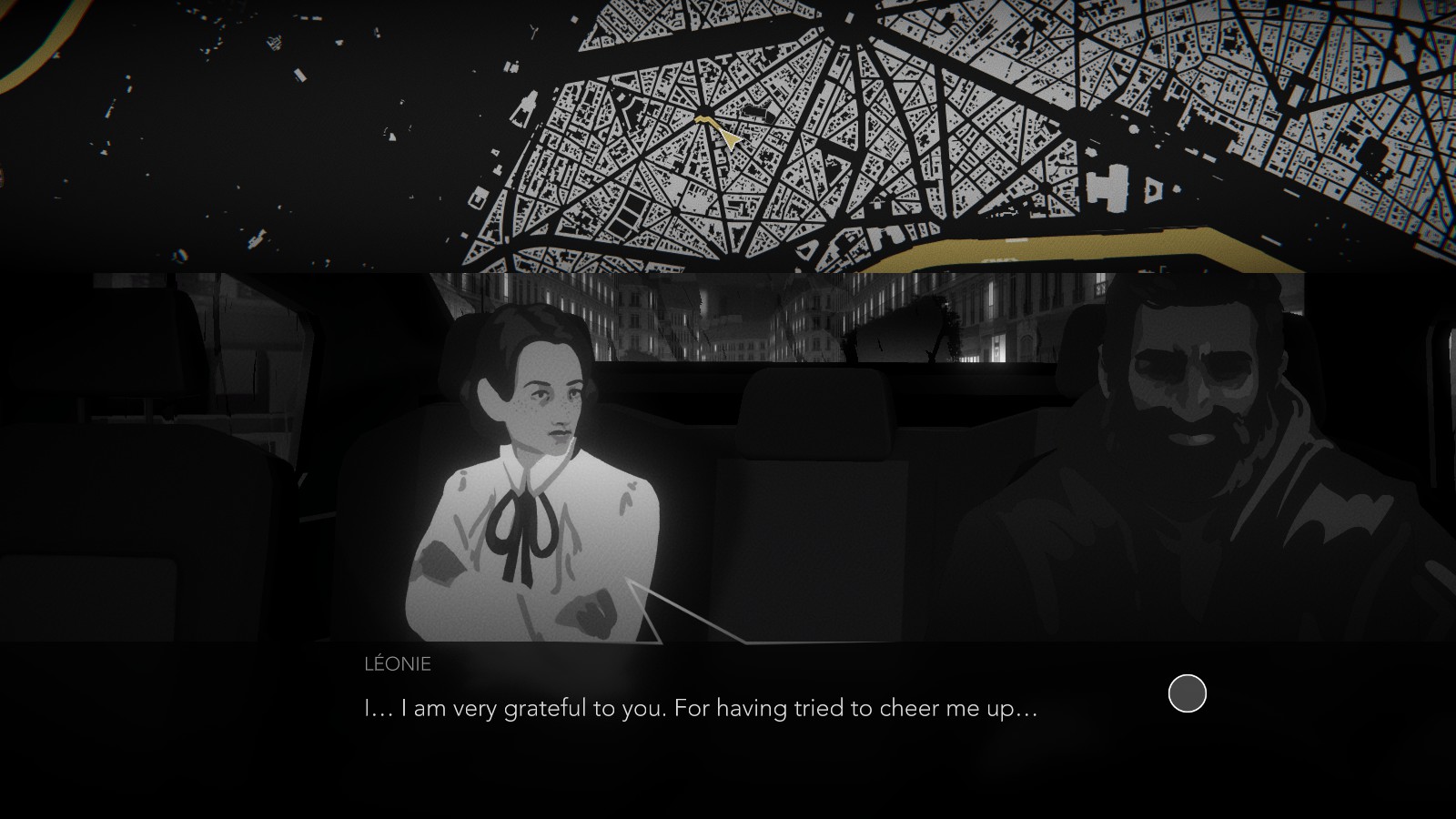 Reunited with your good ‘ole taxi cab, it’s time to take on some passengers. You’ll be shown a stylized map of Paris and shown where your possible passengers are, gas stations, and this weird eye icon. The most important are your passengers. Whenever the (full) map loads in, you’ll get several passengers looking for a ride. Clicking the map brings you to them and give you an estimate of their fare and how much time it will take. If you decide to drive them to their destination, the lower half of the screen will be inside your cab, otherwise the map will reload all the icons (excluding the passenger you just declined). While you’re driving your passengers, you’ll get to talk with them or listen in on what’s going on. This aspect of Night Call is honestly the best and my favorite. I loved hearing all the passenger’s stories, hearing what’s going on in their life, and getting to know them. Some passengers even have an ongoing storyline so you’ll see them more than once in a single playthrough. This very well will make you want to meet all of the passengers and hear all the stories they can provide, but it might not be possible without a ton of patience. Between picking passengers up, you can also listen to the radio or read a newspaper (assuming you have one), though, this will take up some of your time. 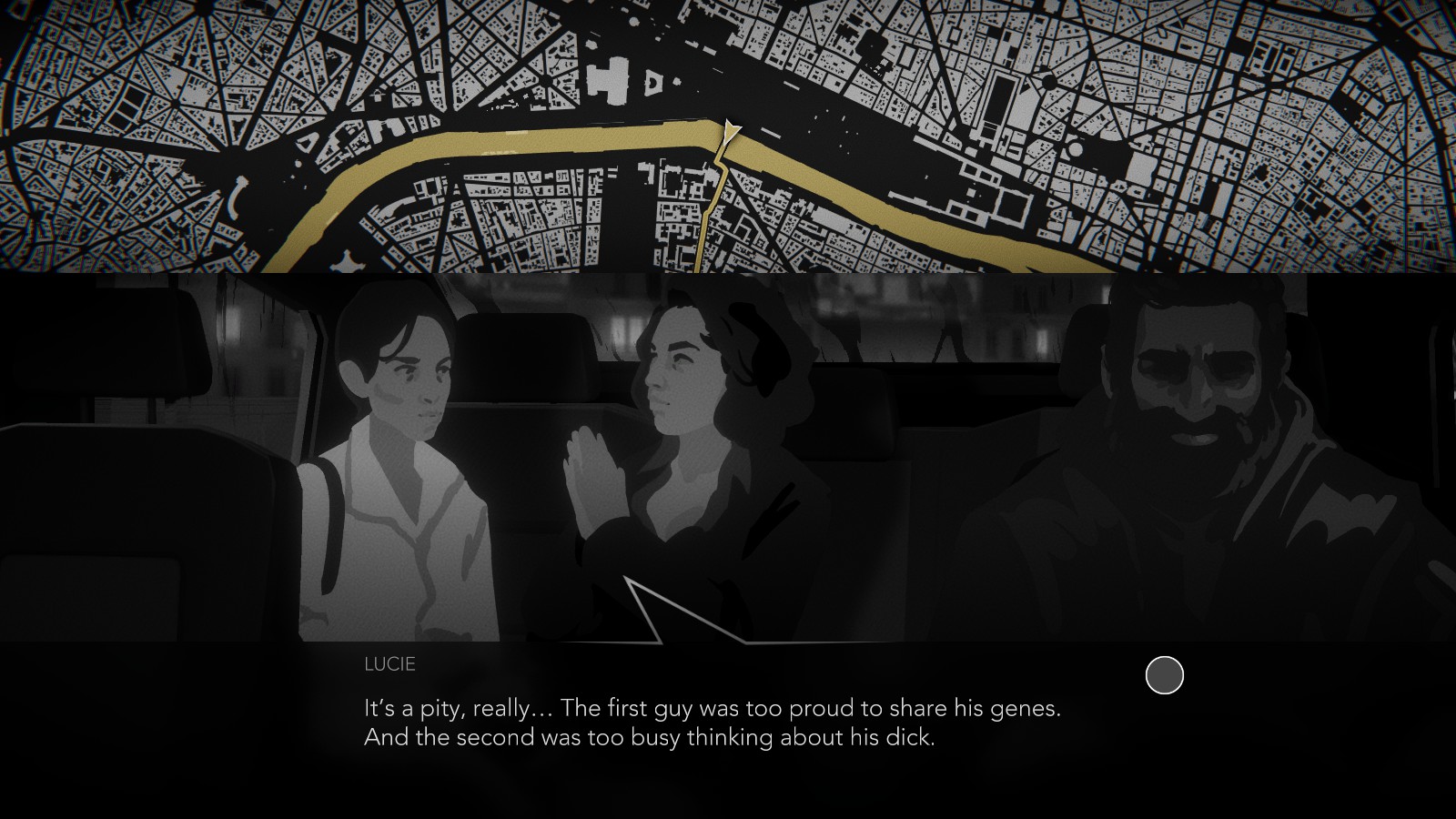 You’ll also have to deal with making sure you have enough gas so you’ll have to decide when to head towards the gas station. Once there, you’ll be able to fill up your tank, talk to the clerk to get a rumor about the killer, buy a newspaper, or get your one lottery card per day. Also, a little pro tip, if you’re close by a gas station (or just came out of one) you can reload the map by going back into the gas station.

The eye icon is unexplained but important to the investigation. Once curiosity wins out, you’ll find out that the eye icon actually means that an informant is there. This will give you information that you wouldn’t have gotten normally and even be a break in the case (though you have a chance at one of them requiring some payment). The only thing is that I feel like Night Call should have told you what these are. There’s also a bug where one of these locations will end right away. Leaving you confused and without a clue. 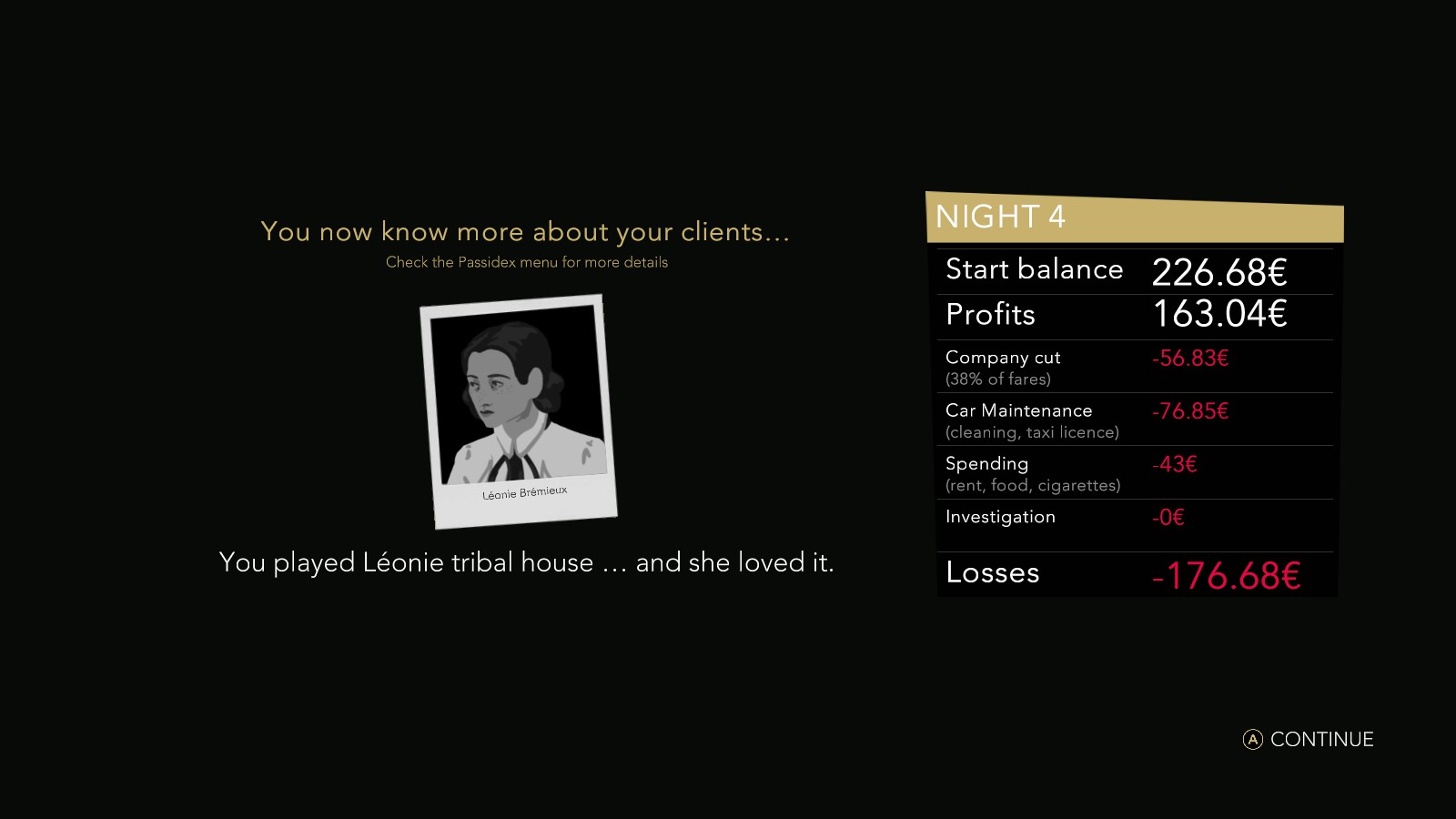 Once your shift ends, you’ll get an overview of your profits and losses for the night. If your balance is in the negative at the end of the night, you’re fired. If you’re not, you’ll be taken to your apartment where you can read documents (assuming you have enough time) and look over current clues on the corkboard. You can move these clues around and see where they came from, but you can’t do anything other than that. Some clues are automatically linked to one of the five suspects and even if you think a clue links to one, you can’t do it yourself. A couple of days into your investigation, Busset will call you to remind you of your situation and to eliminate a suspect from suspicion. 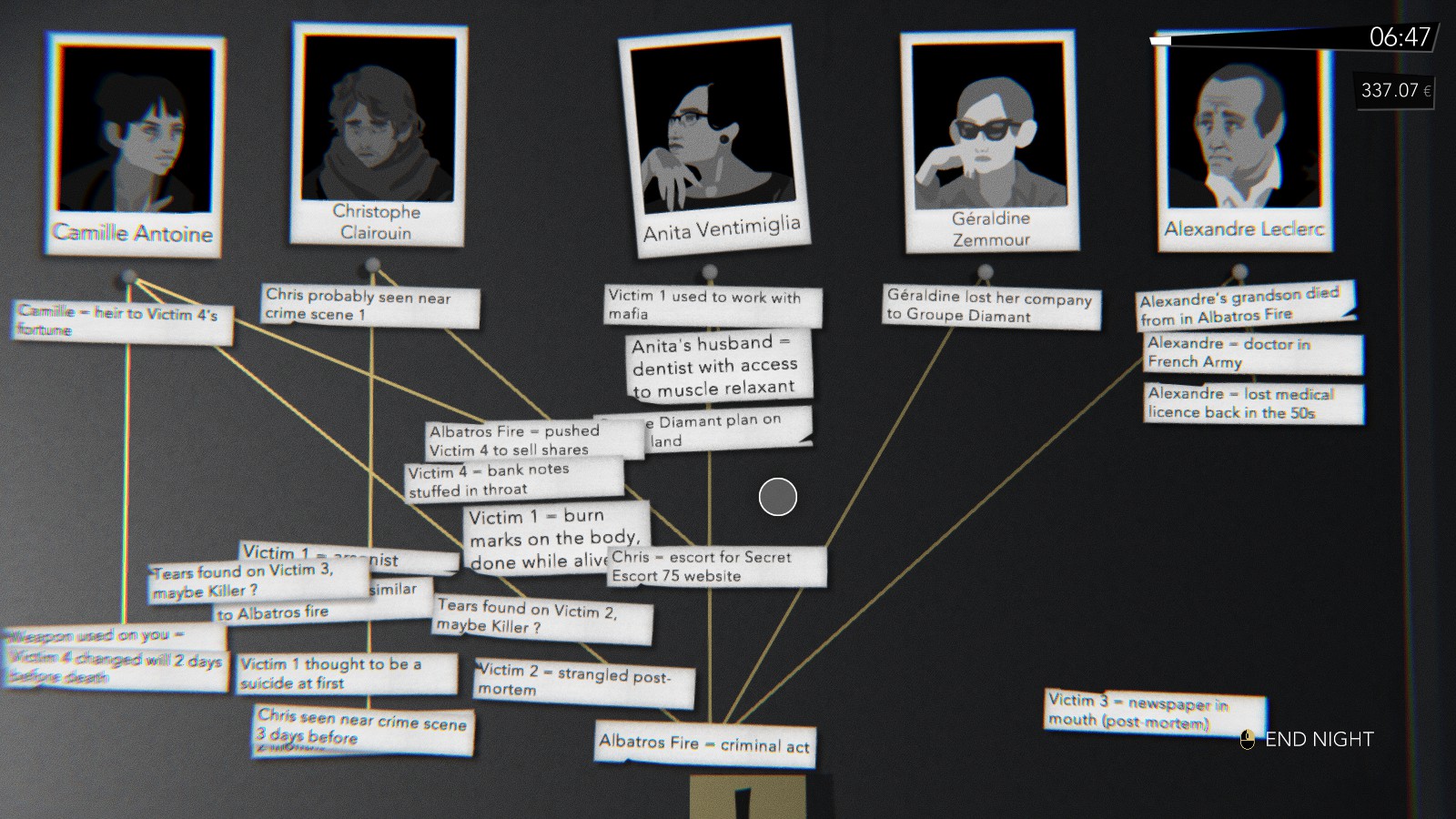 Sadly, Night Call has some other downfalls. Like I mentioned before, you most likely won’t meet all 75 passengers. This is due to the passengers having a random chance at appearing and a handful of them rarely show up. I wanted to meet them all, only missing six passengers (with a couple that I still need to get the rest of the story) in my 8 playthroughs, but I just can’t anymore. After a while, Night Call gets a little tiring and I just don’t want to replay more to have a chance to meet those new passengers. Yes, I did like a lot of the passengers, but I also don’t want to repetitively run into them just to hear the same thing when I want to finally meet someone new. I wished the more rare passengers had more of a chance of showing up as time goes on after multiple playthroughs.

There’s also an annoyance that comes with this as well. Each night, you have a chance of getting interrupted with a sudden passenger (with one being a scripted event). It works well but upon replays it can be annoying, especially when you see a new passenger since they have a chance of disappearing when the map reloads. Not to mention that these sudden passengers also have their own seemingly lengthy storylines, but the ones you already heard keeps getting repeated. On the detective side of things, I wish that the player could be more hands on., like reading the case files and linking clues to suspects yourself or even telling you the victim’s names as it’s confusing when another character mentions a victim’s name.

Lastly, the three difficulty modes don’t seem different apart from some minor differences. No matter which difficulty I was on, I always ended up in the red with the rare day of being in the green by ~15€. Story mode (the easiest difficulty) seemed like gas was being used up faster and, weirdly enough, was the only time I ran out of money and got fired. Hard mode didn’t seem like anything was taking longer, but the lower paying fares were popping up on the last day. I can’t really say if clues were harder to get by since by then it was my 8th playthrough, so I already knew who the killer was but it did seem like barely any passengers gossiped about the gas on Hard. 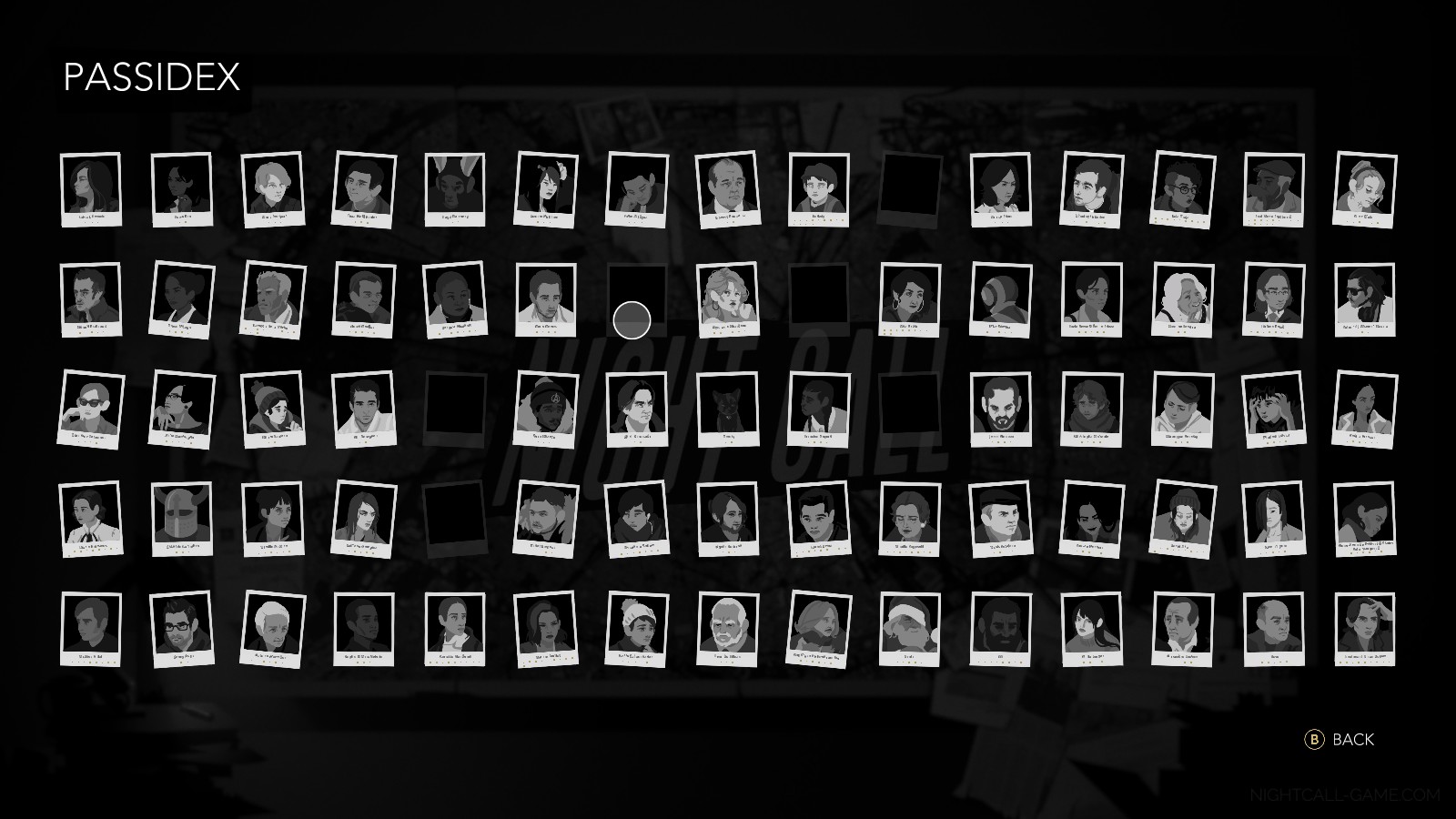 While Night Call absolutely hits that noir look and has great writing for the passengers, everything else eats away at it. It nearly leaves me wishing that this game was just one long campaign focused on the conversations with your passengers and a hint of management rather than three different ones that are very similar.

At the end of the day, I only recommend picking up Night Call when it at a discount and you are in the mood for getting to know the many passengers involved.