Fun AND Relaxing, definitely worth checking out despite Early Access!

Kubifaktorium is a solid recommendation for every fan of colony simulation and/or automation with a few survival elements. In a naive description, think RimWorld meets Factorio with a sprinkle of Banished and Warcraft.

The game still feels much like its own experience and it already has quite a bit to offer, despite being in Early Access and having part of its features in a very beta-state in need of polishing. Though it has been clearly stated by the developer that more fixes are coming with nearly daily updates and hotfixes are released in the game’s short lifespan. If this support continues at a steady pace, this game will have a fabulous v1.0 release!

It’s worth noting, however, that on release it’d be great to see a bit of an improvement to the UI and the tutorials which, while complete, can be too extensive and somewhat confusing for a starting player.

They will get some applause from me here. Simple but aesthetically pleasing, the graphics have a basic “yet cute” art style, resembling Minecraft. It also helps the building aspect and overall micromanagement as the world is divided by tiles and the color scheme is varied to allow players to distinguish buildings, cargo holders, colonists, automation components and so on quite clearly (it just needs a better tutorial and it’ll be an excellent definition of “easy to learn, hard to master”). 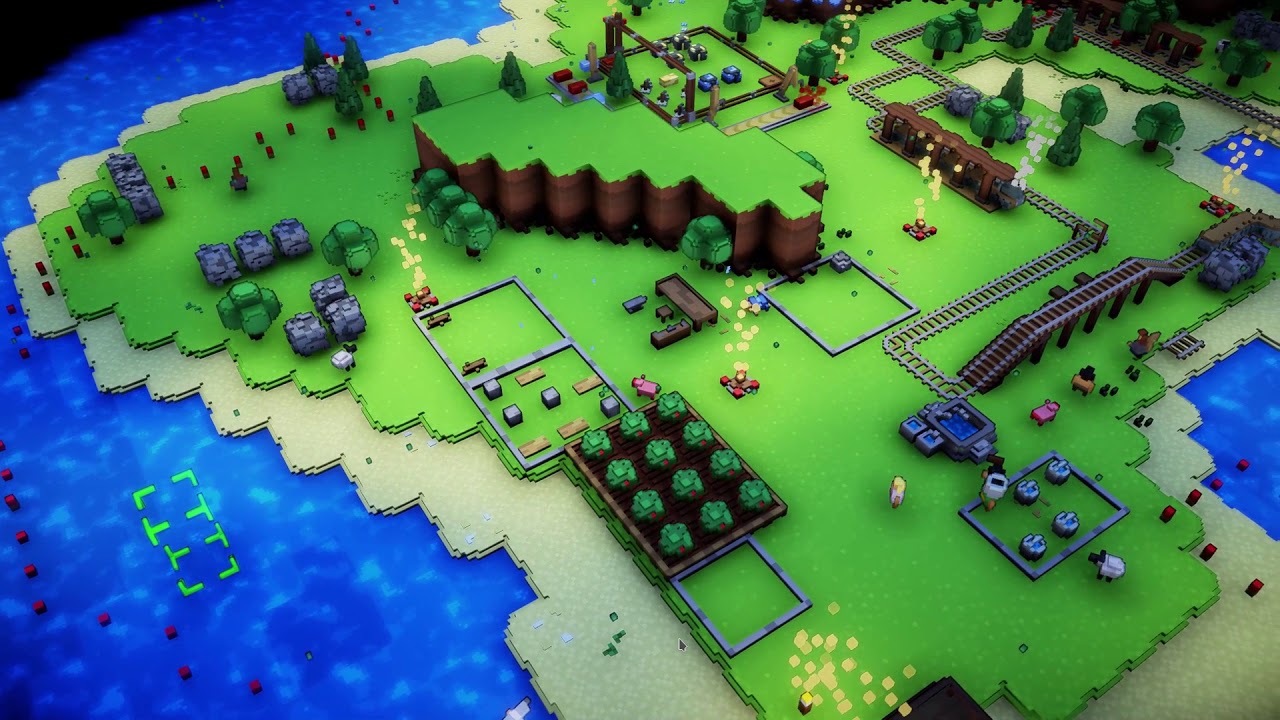 Despite the good art style, the UI doesn’t feel fitting and, worse than that has little feedback given to the player. Even when given, it’s not always clearly presented, furthering a starting player’s confusion upon playing. For example, a lot of information of who’s mining/lumbering or loading cargo, idling, etc. is really difficult to find and is represented in small numbers in menus which are often cluttered and present extra information when hovered on, to the point you can have multiple text boxes and menus on top of each other. This is particularly noticeable in the tutorial and is quite frustrating to deal with at first.

The game has a lot of stuff to do and experiment with, including some of the automation features. These are, however, noticeably buggier than the survival/colony simulation counterparts and need a bit more work. The fun comes from watching the colony grow and grow and expand into more islands and such (to facilitate, you can carry over resources between islands), adding automation, getting colonists to work and even defend your colonies.

And that’s where a few of my issues start appearing: combat can’t really be lost and it just slows the work rate a bit. Lacking certain resources (or even housing) just… slows it down. There is no rush to get X resource or build Y feature/building. The game is relaxing, I’ll give it that, but there’s a thread between relaxing and too easy (to the point management barely feels tense or important at all).

The game is, once again, very relaxing and that makes it a unique kind of fun (by setting it apart from some peers like RimWorld in my opinion, which can be very stressful) and progress isn’t hard to obtain with a little time and attention. I’d like a bit more music to help set the relaxed feeling of the game as it only seems to have 1-2 tracks. A bit more variety of fitting tracks would help give the game the calm feeling it tries to provide the player, but also the adventurous feeling you get from exploring new biomes, new islands, etc.

It’s worth reiterating that, due to the lack of difficulty, the game can be really helpful for new players to the genre or that suck at this type of games (which I admit I do). It’s definitely quite a good starting point in my opinion as I felt more comfortable learning here (despite the weak UI and tutorials) than in other, more punishing games.

Kubifaktorium is quite a simple game with a lot of complex features to make your colonies as awesome as you want them to be (with probably more items and automation processes to come). It’s relaxing and really fun to progress through islands and biomes, introduce new features (automation, buildings, etc.) and be quite helpful to newcomers thanks to the game’s lack of difficulty. Speaking of newcomers, the game has UI and Tutorial issues that may make learning the game a bit more difficult than it should be.

Overall, a definite buy for fans of the genre and for those interested in getting into this style of games. If the price looks too steep, I still recommend you watch the development progress and buy when you feel the game is in a state you find worth your hard-earned money.