Senran Kagura’s infamous Intimacy Mode gets its own game, and it’s really rather good.

Senran Kagura: Reflexions is the latest in the “buxom shinobi” series of games to make it to PC, thanks to the great minds at Tamsoft, XSEED, and Marvelous.

I was introduced to the Senran Kagura series somewhat out of order, first playing Peach Beach Splash, and I was instantly taken by the risqué, but still somehow pure, nature of the games. I quickly became a fan and have received or purchased all of the PC releases so far, as well as reasonable number of DLC characters and outfits. Every time I hear of a new SK game port to PC, my heart beats just a little bit faster.

While Senran Kagura was initially a beat ’em up game, right from the get-go it’s included fan service: dress-up features including lingerie and swimsuits, as well as moveable accessories; lots of titillating poses and innuendo in the dialog and cutscenes; Diorama Mode, in which you’re able to place shinobi in compromising poses for screenshots; and the recently controversial Intimacy Mode, in you can touch your chosen ninja girl with independently controllable “grabby hands”. Peach Beach Splash and Bon Appetit changed up the beat ’em up formula, but the fan service remained, of course!

Reflexions is all about fan service: it’s the Intimacy Mode of the other games, wrapped up in a light visual novel format.

Reflexions focuses on Asuka, of the Hanzo shinobi school and the lead character of many of the previous games. She’s also my favourite character of the series. Lucky me! 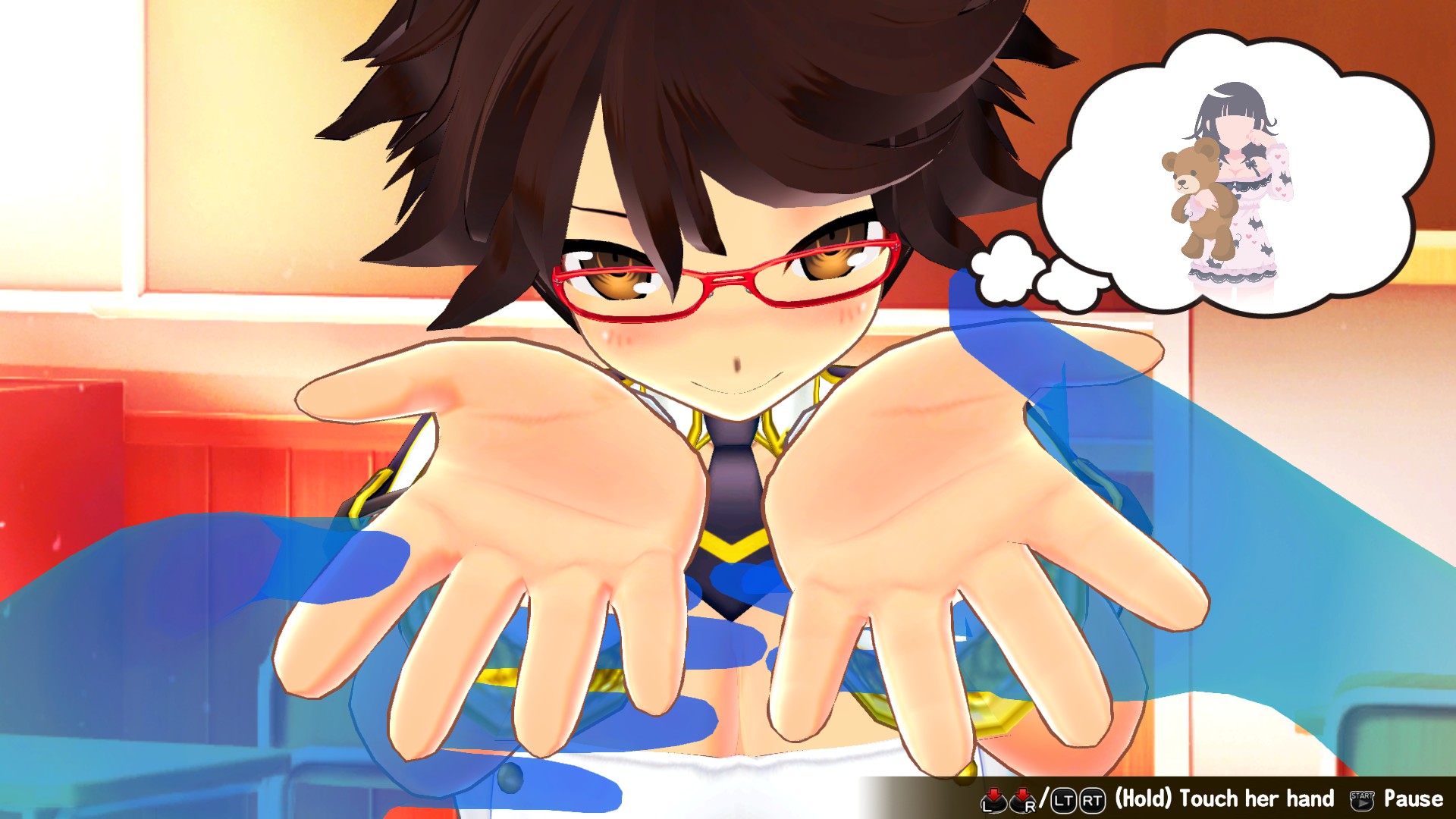 You play an un-named person seemingly from Asuka’s past, encountering her at school one day. After a short time, you find yourself holding hands with her and, through stimulating parts of her hands with basic reflexology, trigger certain moods and day dreams.

Each of these day dreams takes place in one of seven environments, dependent on which part of Asuka’s left or right hand you massaged, with each palm, thumb, and finger on each hand being potential targets (ProTip: there’s an easy-to-learn pattern). Asuka says a couple of brief sentences and then it’s straight into a modified Intimacy Mode.

Here you build up hidden points in each of five moods, based on your type of touching — grabbing/squeezing, rubbing, or general touching — and the position on Asuka’s body that you touch. The moods are represented by colours — blue, purple, orange/yellow, red, and green — making it easy to see the effects of your touches. After you’ve reached a certain threshold, the background changes to reflect Asuka’s major mood. Keep touching and you’ll be able to enter Glorious Reflexology Mode. 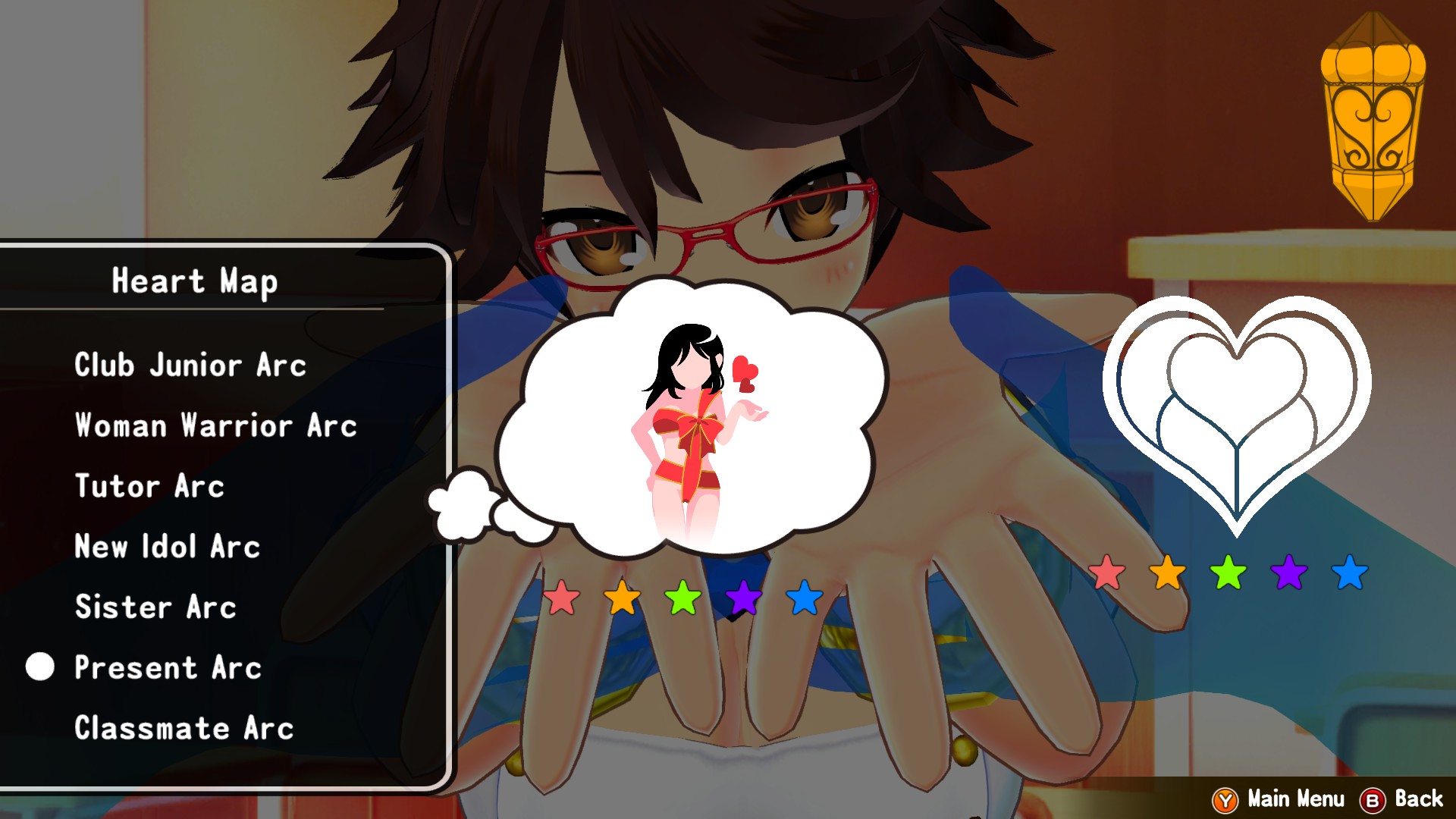 Glorious Reflexology Mode gives you one minute to massage one of Asuka’s arms or legs in a specified manner. You need to massage to a certain rhythm using the left and right controller sticks, in order to increase her pleasure gauge up to a certain threshold. If you succeed, then you proceed to another short visual novel segment during which Asuka explains her growing feelings for you in respect of the primary mood/colour established in the previous Intimacy Mode section. Fail and the story simply doesn’t progress. 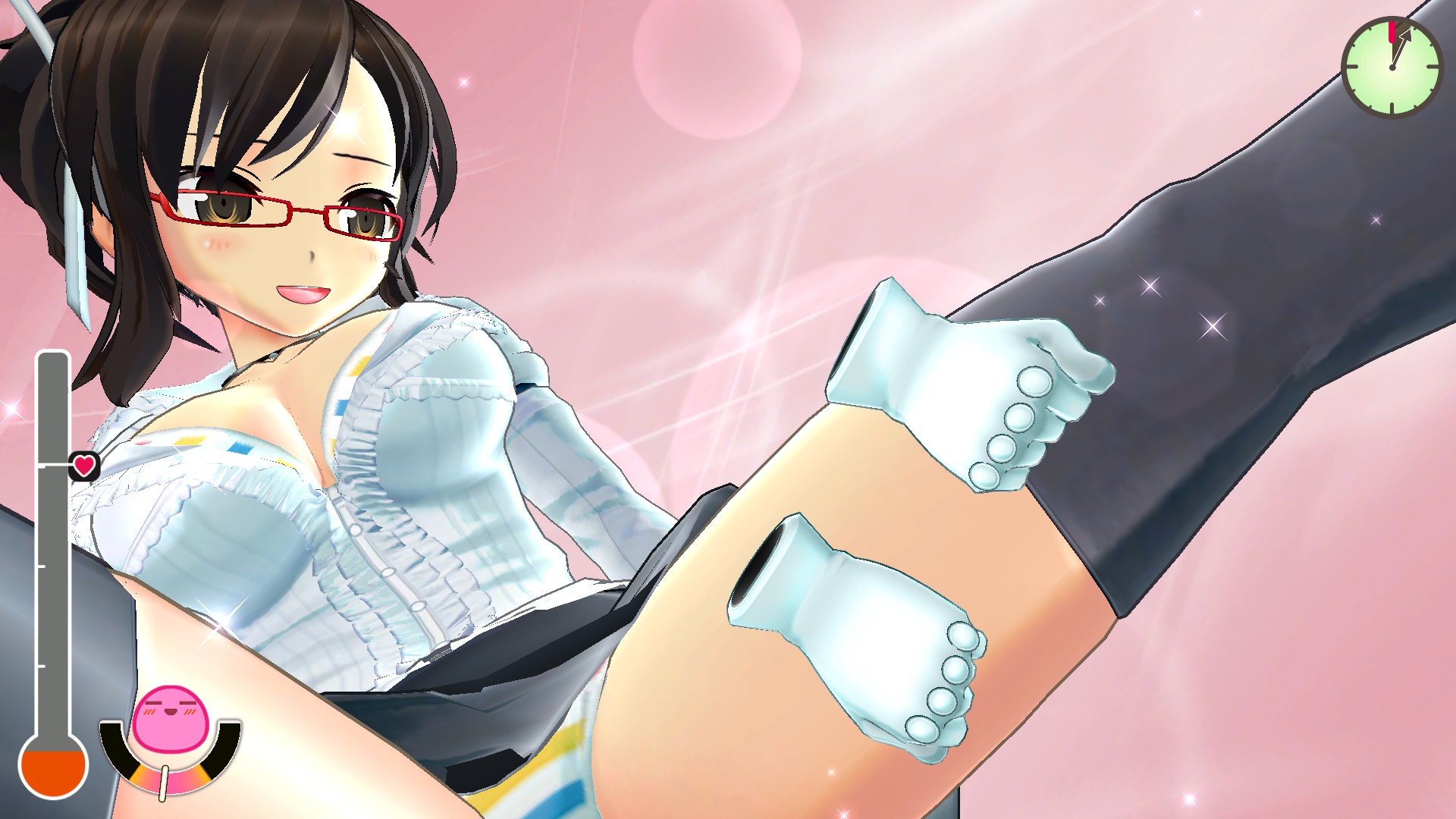 Gameplay continues through a series of short visual-novel style scenes, day-dream Intimacy Mode, and Glorious Reflexology, until you’ve managed to complete each of the five moods for Asuka, unlocking her heart. 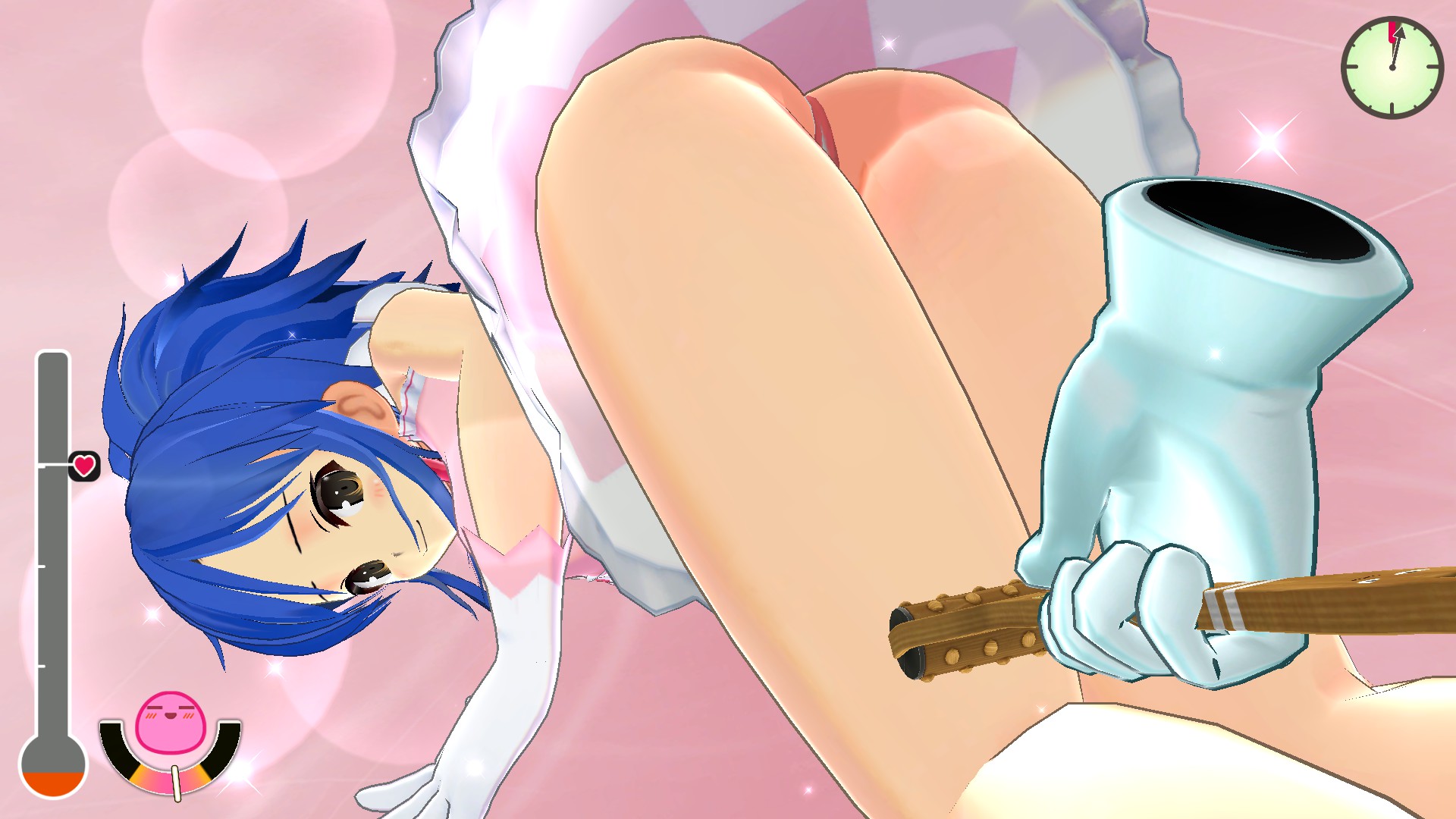 Come closer; let me look at you …

As usual, Asuka looks wonderful. Though it’s been a few months since I played the other games in the series, it seems to me that the graphics have improved again, with Asuka’s 3D model seeming to be a bit more detailed and better animated. She has plenty of expressions and poses that portray her moods and emotions well, and her reactions during the Intimacy Mode sections and the basic hand reflexology are priceless. Glorious Reflexology graphics are nice, too, though being able to control the camera and pose would have been great. I noticed a few minor clipping issues with some outfits and accessories, too (e.g. Asuka’s scarf in her default uniform).

Sound effects, music, and voice are all great and exactly what you’d expect from a Senran Kagura game. There are plenty of different anime-style music tracks and Asuka’s voice actor does a great job again (at least, I assume it’s the same actor).

The interface is easy to use, with controls displayable on all screens to remind you what to do in the heat of passion. Keyboard and mouse is supported, but I used a controller; on-screen displays dynamically adjust to whichever method you’re using, regardless. The game text hints at controller vibration, and I believe this worked in the Switch version, but my XBox 360 controller didn’t vibrate. 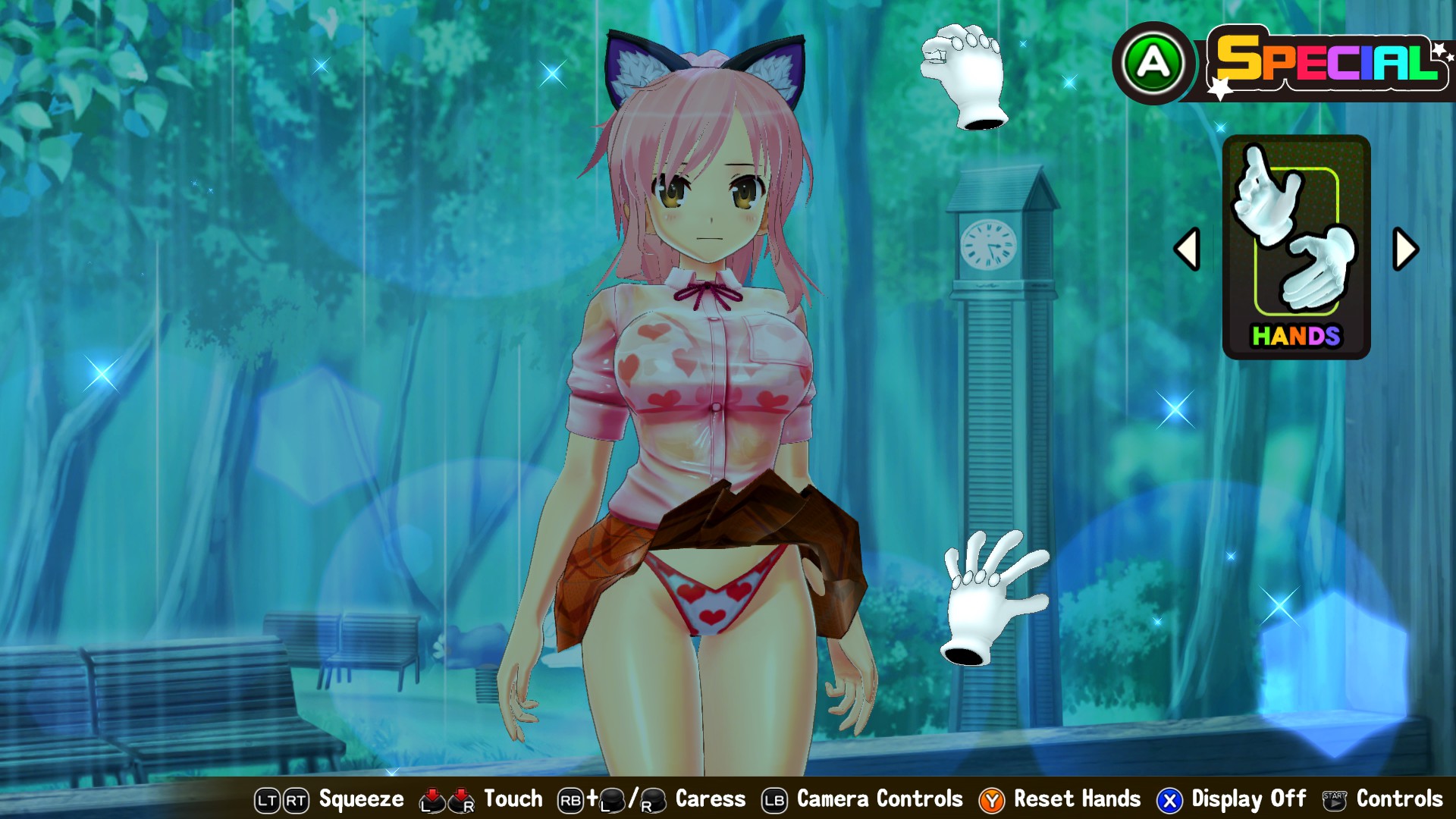 Performance is as smooth as Asuka’s silky skin on my GTX1070-based gaming laptop with everything turned up to full.

If there’s one thing that disappointed me about Reflexions, it’s the length. I finished the game with 100% achievements (though with a few costumes left to unlock) within about three-and-a-half hours.

That’s not bad given the price of the game, especially considering there’s still some replayability, with further unlockables; “Mini-Reflexology Mode”; and Diorama Mode. But even so, I was a bit disappointed when I completed the story. I want more Asuka!

Reflexions wouldn’t be a proper Senran Kagura game without unlockables, but the number of items here is considerably smaller than in the rest of the series: less than a handful of swimsuits, a dozen or so other costumes, another dozen or so hairstyles, and a collection of accessories comprise the dress-up options for Asuka.

I don’t think there’s anything too unusual in any of the dress-up options, but a number of old favourites are here. I would have loved to see some more interesting costumes like the gift-wrap swimsuit and the transparent school uniform, but at least I’ve been able to duplicate my earlier Yin-Mode Asuka catgirl, anyway. 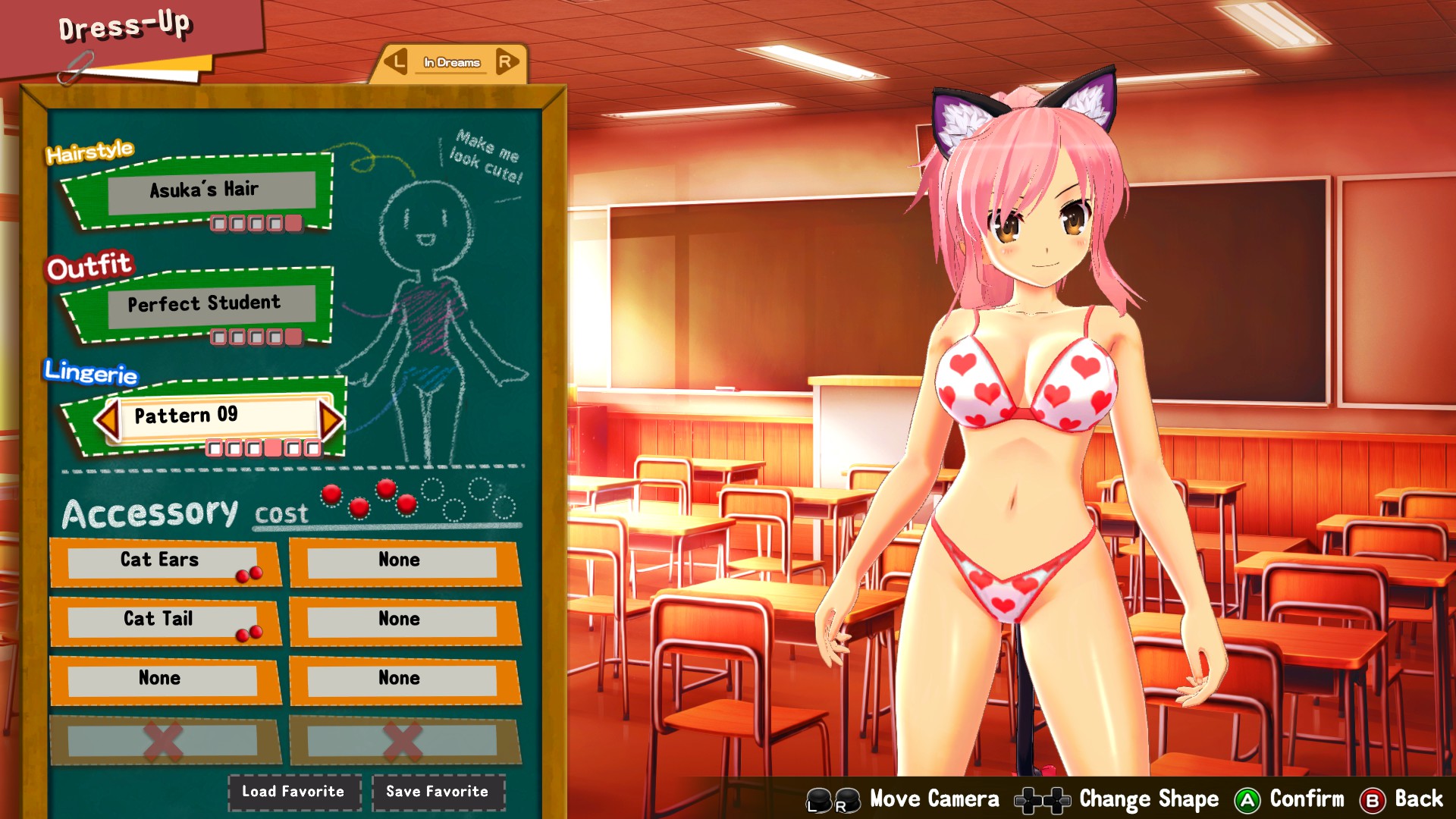 Other unlockables include title screen backgrounds, images and a video, and background music and menu voices: all pretty standard for the series, but definitely still welcome here. As with the other SK games, Reflexions includes Steam Achievements and Trading Cards.

Love it or hate it, DLC has been a part of the SK series for most of its life, and the PC releases are no exception, with only Shinovi Versus and Bon Appetit being DLC-less. 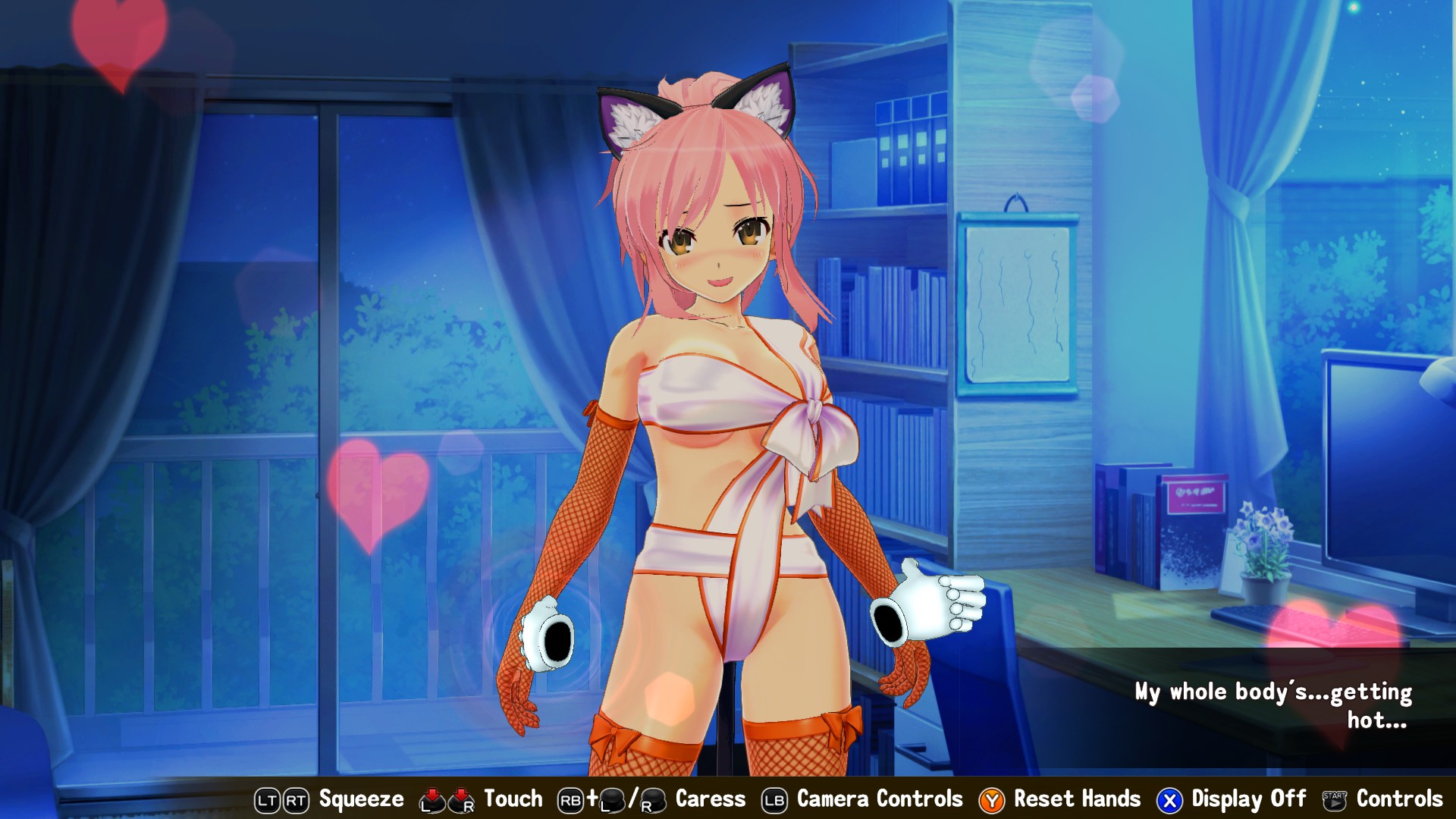 So, we’ve reached the all-important question: is Reflexions worth a purchase?

If you haven’t played a Senran Kagura game then Reflexions is probably not the best place to start, though I’m sure you’ll have some fun with it, regardless. If you’ve enjoyed the other SK games, however, then yes, you should definitely buy Reflexions!

It’s short and only has a single character, but it’s extremely well made and reasonably priced for the content that’s included. I’m looking forward to playing with the DLC characters, though of course nobody could compare to catgirl Asuka!