To infinity and beyond!

Starfleet needs you! Aliens have kidnapped our general, and we are sending our crême-de-la-crême recruits to bring him back. So grab a few friends and launch into this explosive local multi-player game!

Are you doing your part? Join Starfleet and save the world… our general!

Catastronauts instantly disappointed my friends when they realized that we were not playing cat-astronauts but rather catastrophic astronauts. We left the animal characters of Overcooked for humanoid aliens donning a Star Trek uniform, and despite the lack of aprons we felt like we were on familiar territory: B to dash, A to pick up items (repair kit, fire extinguisher) and X to use (extinguish the fire, repair, shoot laser canons).
(You will be happy to hear that it is possible to unlock a true cat astronaut during the course of the game) 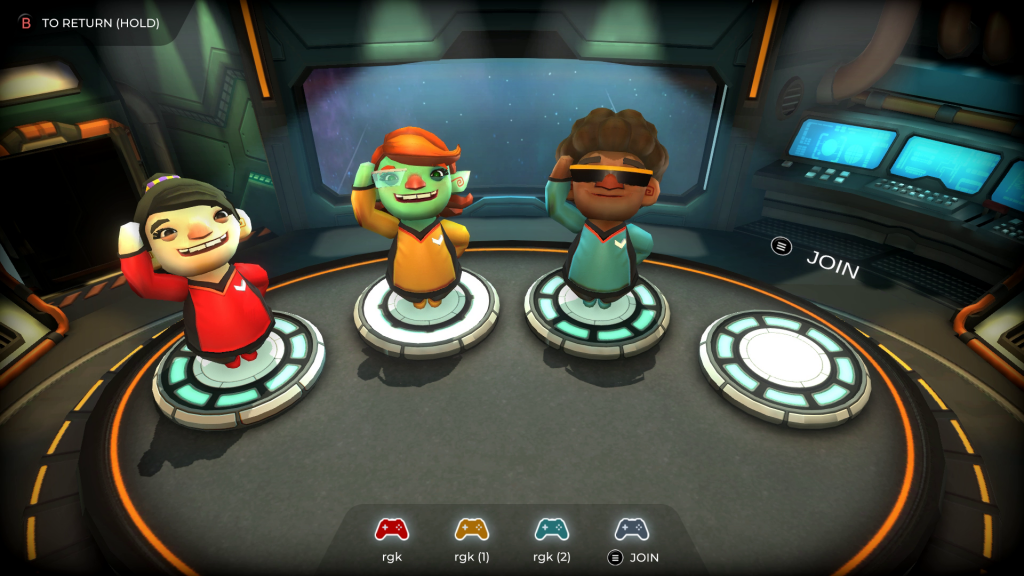 Just like in FTL, our crew had to resist against an off-screen spaceship while repairing and shooting, until either ship’s defenses reach 0. A few laser canons are located in the ship, and just like the rest of the ship they can be damaged by enemy fire, requiring the repair kit to be put back in shape. And be wary of fire, as that can quickly spread and damage the ship along with the players who might need to waste time in the infirmary to recover, or use a respawn pod. 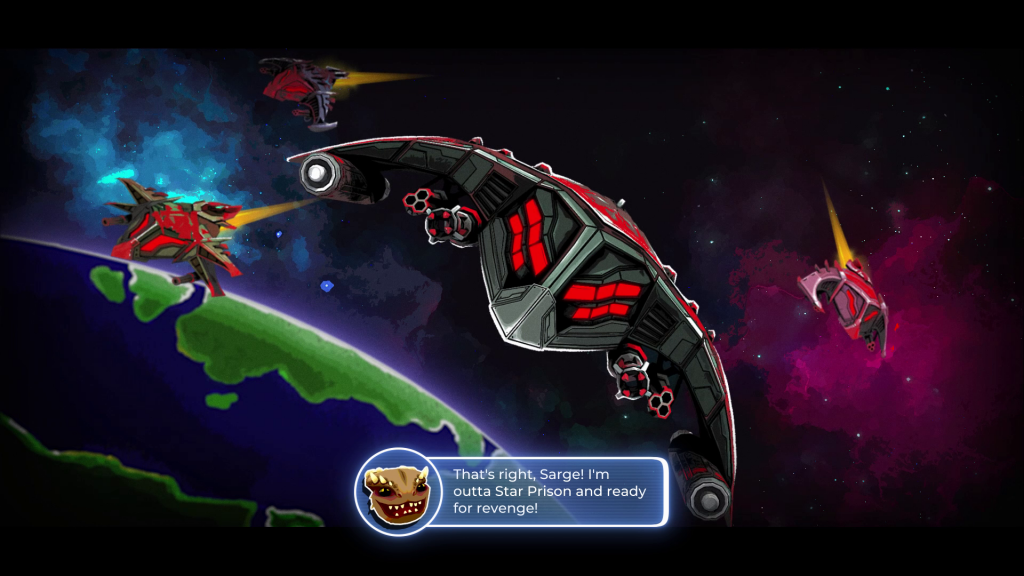 Each mission is different

Our ship was frequently under fire, causing the doors to jam and fires to spread as we were frantically trying to extinguish areas suddenly and frustratingly out of reach. This was very chaotic, and we did not feel that we were interacting enough to have a good time together. And then we graduated to new levels, thankfully leaving jamming doors behind as we discovered with glee that each level featured its unique game mechanic.

One level had some sort of blizzard frequently capturing unaware players in thick ice cubes, and the only way to avoid this fate was to quickly reach the center of the ship and close the blast doors. We had tears from laughing as little mishaps happened when one of us was not quick enough or we forgot to close the doors despite a frantic rush inside.

Another level had us arming unstable bombs and delivering them to a two-man canon, but taking too long would cause the bomb to explode and spread fire in a huge section of the ship. Our shouts and cries were perhaps almost as deafening as when we played the level in which an enemy ship kept dropping mines on ours, and we kept running around like headless chickens trying to get rid of the mines while also trying to repair the ship, extinguish fires, and to shoot the canons.

Once we got to the ships that have cargo doors opening to the vacuum of space, a few unfortunate “murders” had us cry while laughing too much. Those buttons were too tempting to press… In my defense, there was an actual game mechanic underlying this, which was the smart idea of removing oxygen to prevent fires from spreading. Airlocks could be opened or closed to decide which areas to sacrifice, and I might have enjoyed warning my friends a bit too late when I was taking the air out. They now hate me. 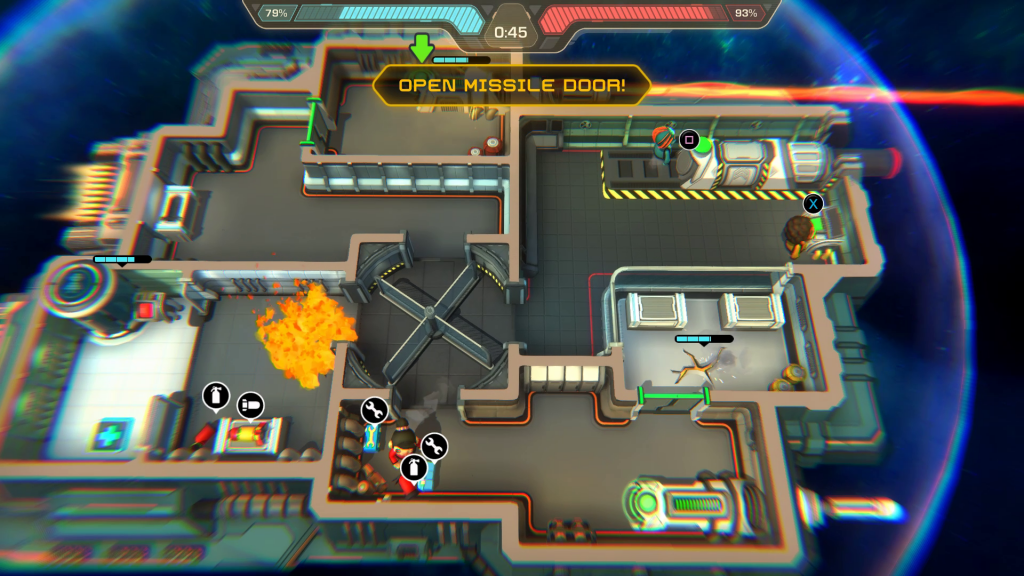 Catastronauts does not require a level of player coordination and cooperation as involved as in Overcooked and its chain of steps to cook and serve a meal. There are some teleporters that require coordination to transfer items between two closed portions of a ship, but overall it’s much more freeform chaos rather than an iron organization. To our relief it still required us to interact with each other and speak and shout and cry and laugh, it’s just less planning and more quick decisions BECAUSE WE QUICKLY NEED SOMEONE TO GO PRESS THAT STEALTH BUTTON BEFORE THE ENEMY MISSILE HITS US… oh, too late. 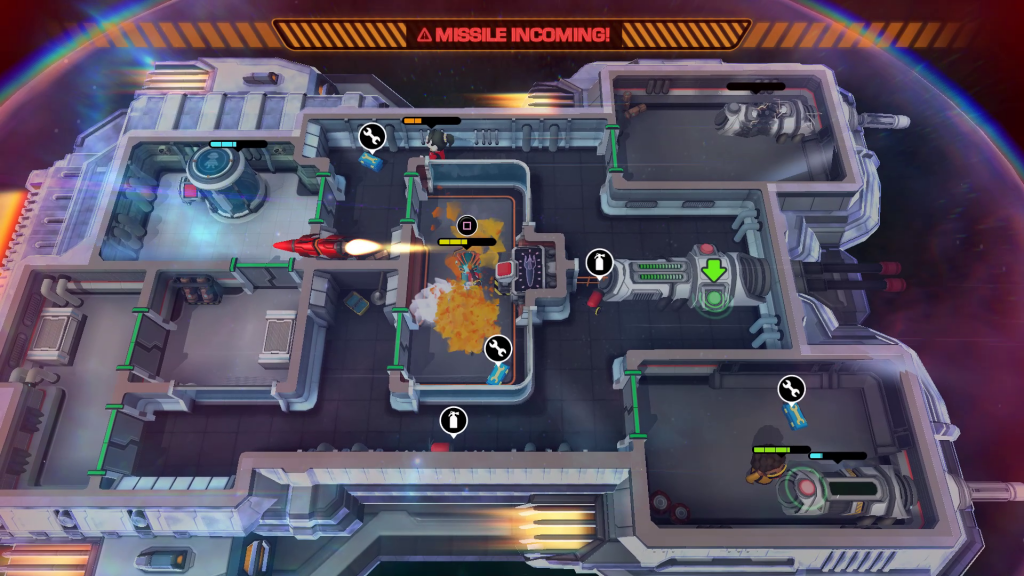 My only gripe with the game mechanics was small inconsistencies between similar actions. Sometimes a respawn machine would need a button press, sometimes it just happened without requiring player input. Sometimes laser canons required a single press, sometimes they required a longer press to charge up. It’s not a big deal and part of the learning curve of each level, but more visual differences could have helped make this more elegant. 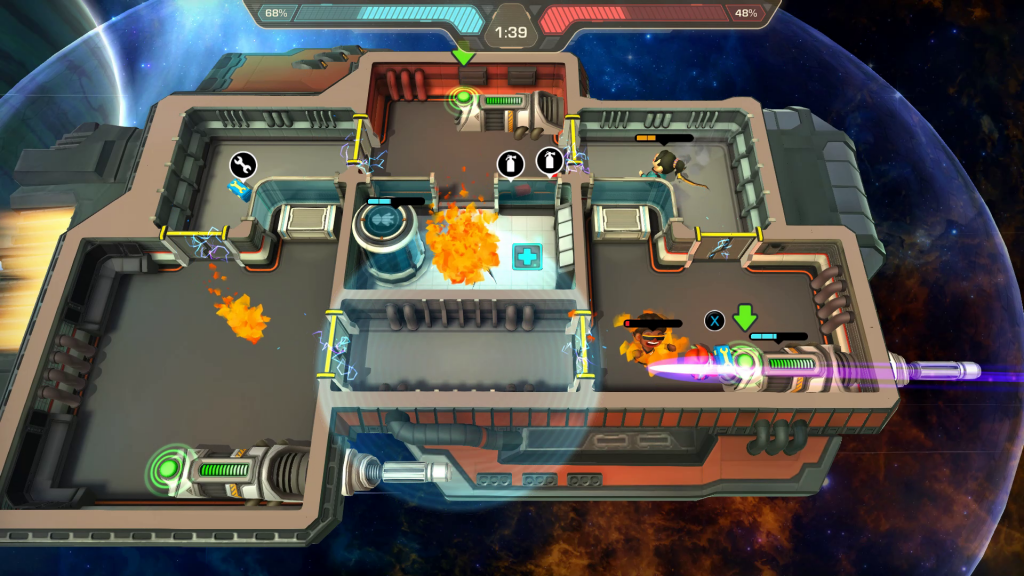 From recruits to veterans

Due to the fact that an organization divided into easy small tasks is not so simple to achieve, Catastronauts can sometimes feel quite difficult, and it would be a suicide mission to start later levels with people who have not played the first levels to get familiar with most systems. It’s not a simple pick up and play, but it’s still an accessible game that is almost immediately super fun to play. 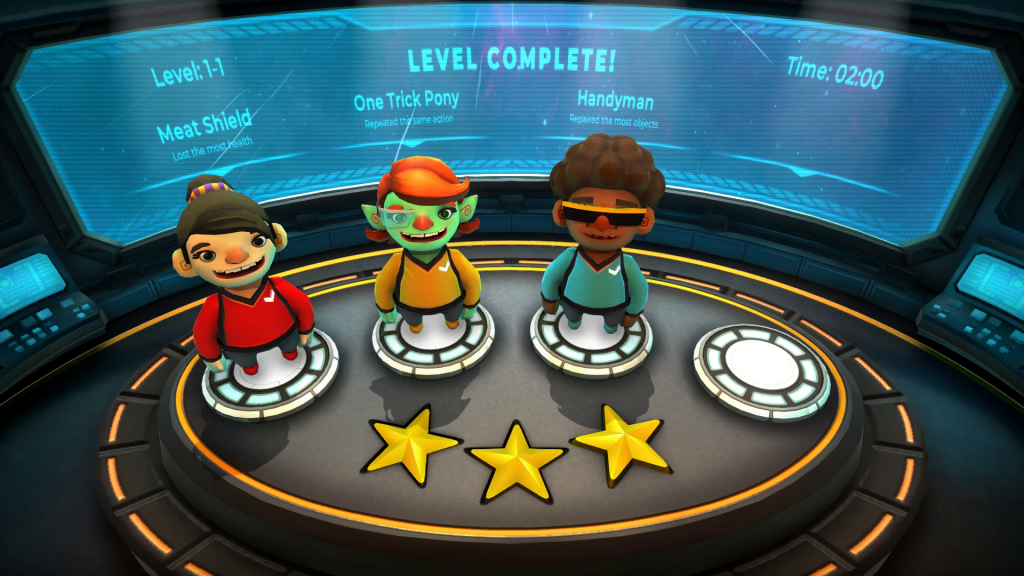 The graphics are absolutely lovely. We loved the characters and the animations; everything is perfectly polished. Maybe we would have liked more variety in the design of the ships, but that’s a minor complaint, and I won’t ask why our crew always brings a different ship to a mission. New characters are gradually unlocked, and we finally got to the cat-astronaut, my friends cheered! 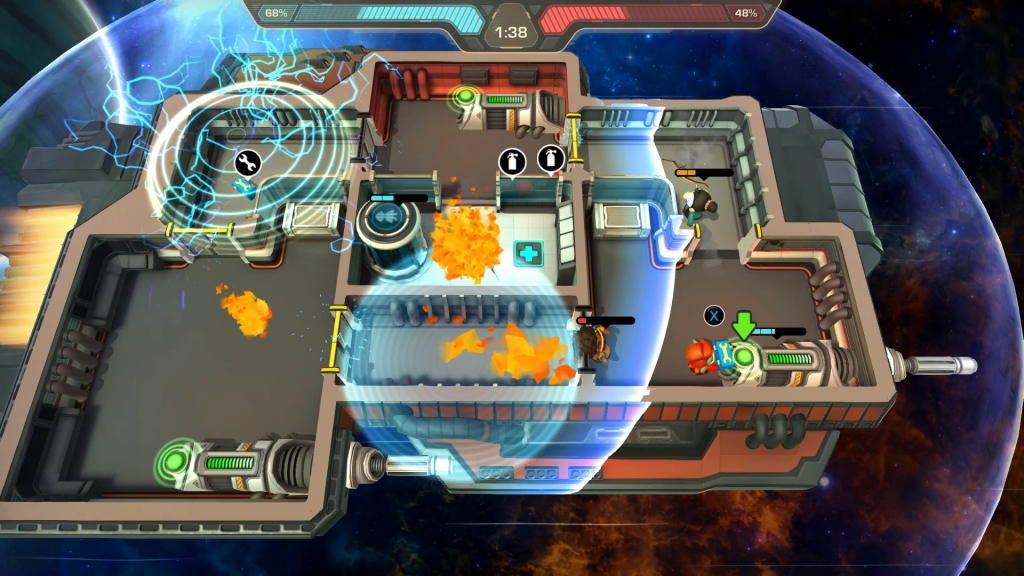 While this game is local multiplayer only, I hope it follows the Overcooked route of meeting enough success to deliver a sequel with online multiplayer. I can’t help but picture two crews of players fighting each other inside facing ships! 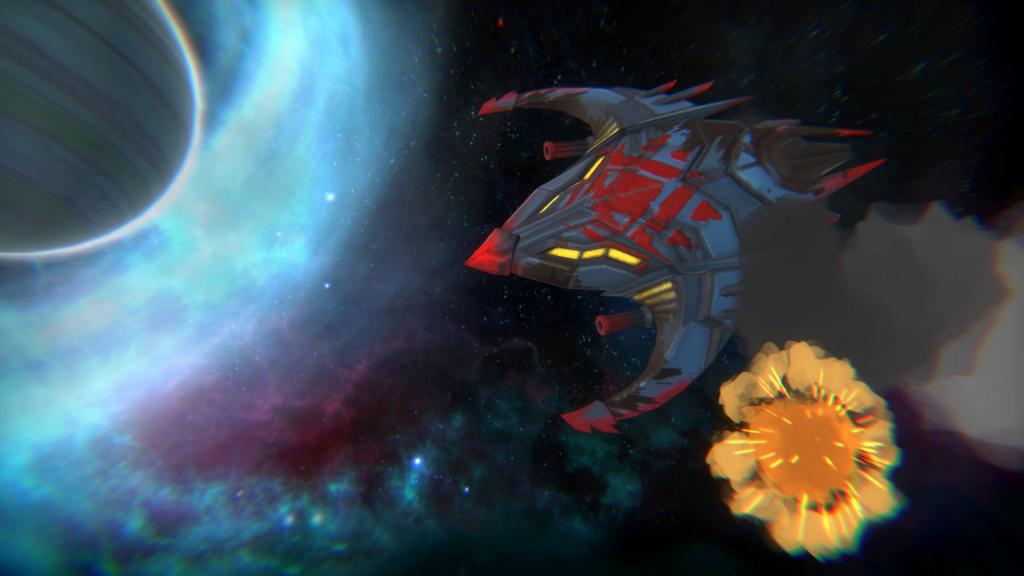 Catastronauts is brilliant and another cooperative must-have for parties. This game is more freeform chaos than careful planning, but it works well and the level-specific game mechanics keep the experience fresh while giving plenty of reasons to burst out laughing or scream at catastrophic fails. We had a blast, and I recommend this game to complete your local multi-player toolkit.